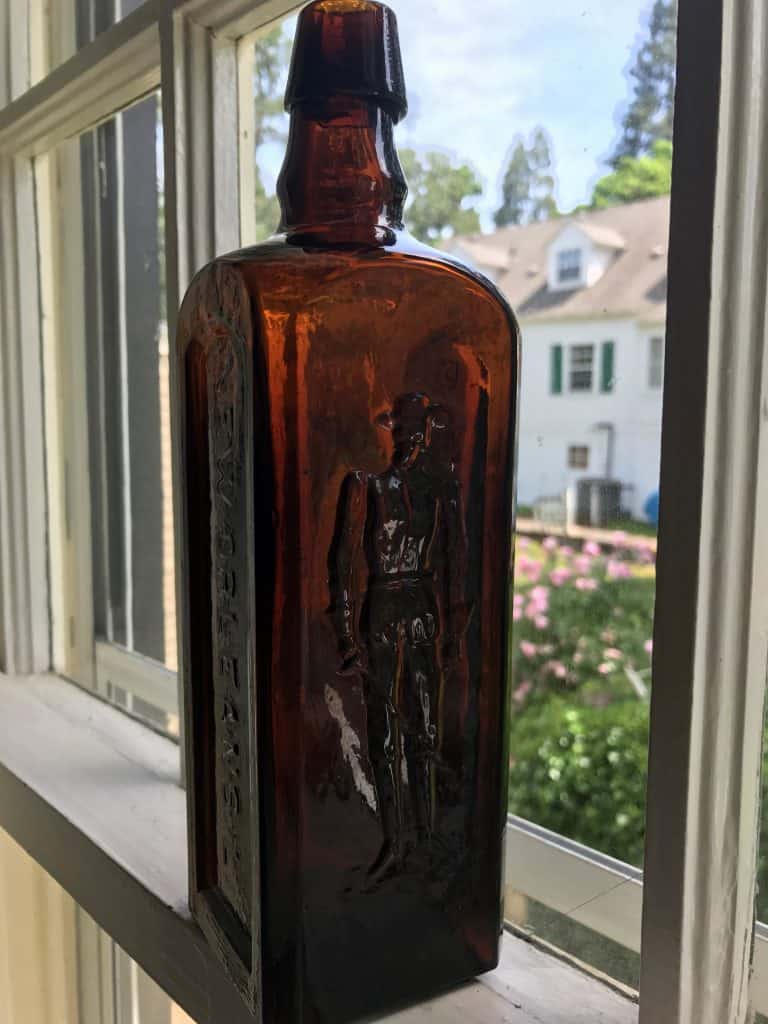 Dale Mlasko recently posted pictures of a whittled and mint, red amber, Barnett & Lion’s (sometimes spelled incorrectly as Lyon) “Grey Jacket Bitters” bottle from a collection that was boxed up and unknown for decades. This labeled (not embossed) Southern stomach bitters, from New Orleans, was first produced in 1865. The bottle has a really cool embossed confederate soldier, hence you would assume, the name. The label probably had a color illustration of Johnny Reb. The bottle is extremely rare with probably only a handful secreted away in Southern collections. This bottle is very desirable and has so much going for it. 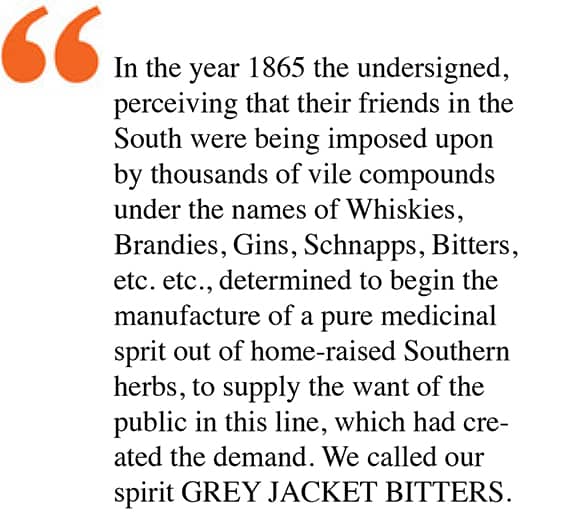 The advertisement below breaks away from Johnny Reb and says. “From the recipe of a well-known and celebrated GREY JACKET CHIEF.” Interesting. We know that there were at least three different Red Jacket Bitters out there named after Red Jacket (c. 1750–January 20, 1830). Red Jacket was a Seneca orator and chief of the Wolf clan, based in western New York.

Read: He had a new variety of bitters known as Red Jacket Bitters

There was even a Blue Jacket Bitters with marketing using a Union soldier. And to complicate things, there was even a Chief Blue Jacket or Weyapiersenwah (c. 1743 – 1810) who was a war chief of the Shawnee people, known for his militant defense of Shawnee lands in the Ohio Country.

Actually in New Orleans, there is another reference to Grey Jacket. The New Orleans Greys were a Military volunteer unit of two militia companies that totaled about 120 men that had formed in the city of that name for service in the Texas War of Independence. Their name came from the grey military fatigues they wore. Heck, I even found record of a schooner named Grey Jacket that sailed into New Orleans during the same time period. Lots of Grey Jacket references.

At the end of the day, it is probably a double entendre referring to Chief Gray Jacket for medicinal purposes and to the Confederate soldier who were the primary audience for the concoction. The problem here is that I do not know who Chief Grey Jacket was?

Now, let’s look at Dale’s pictures and say what we know. We are talking here about Manuel (Michael) Barnett and Hermann (also Herman) Lion who were from London and Hamburg, Germany respectively. They made their way to America and settled in New Orleans, Louisiana. Both were listed as Importers and Dealers in Foreign and Domestic Liquors, Wines, etc. at Nos. 81 & 83 Gravier Street. The bottle, advertising and directory listings are centered around 1866, one year after the conclusion of the American Civil War. Obviously this sparked their business model. 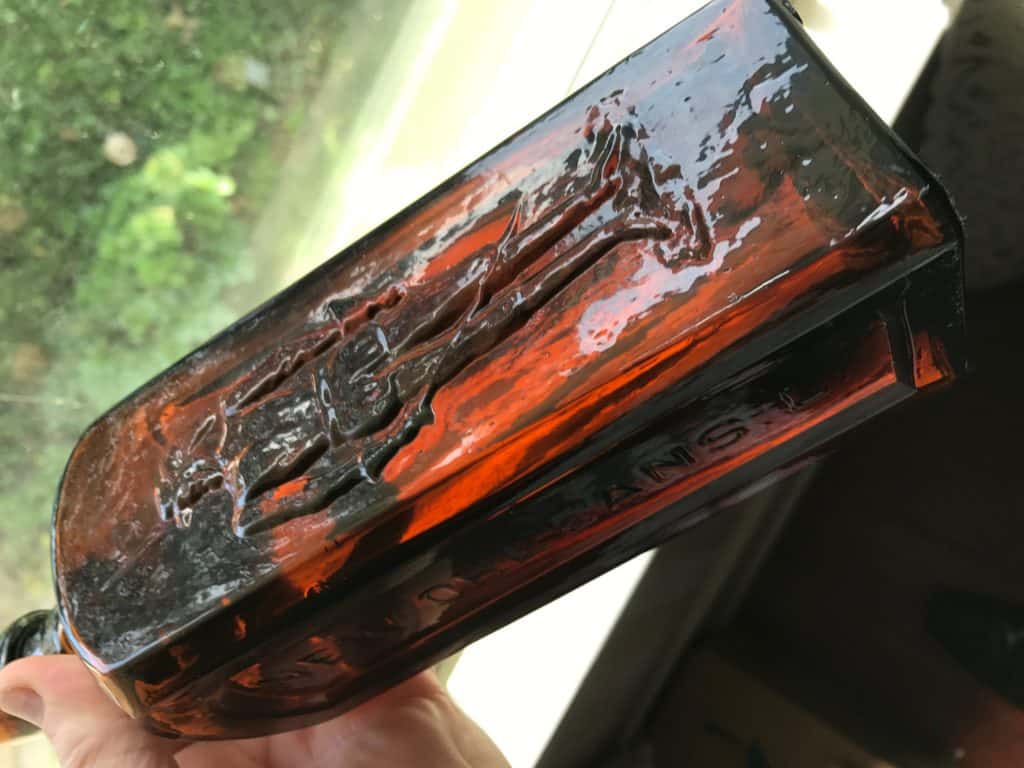 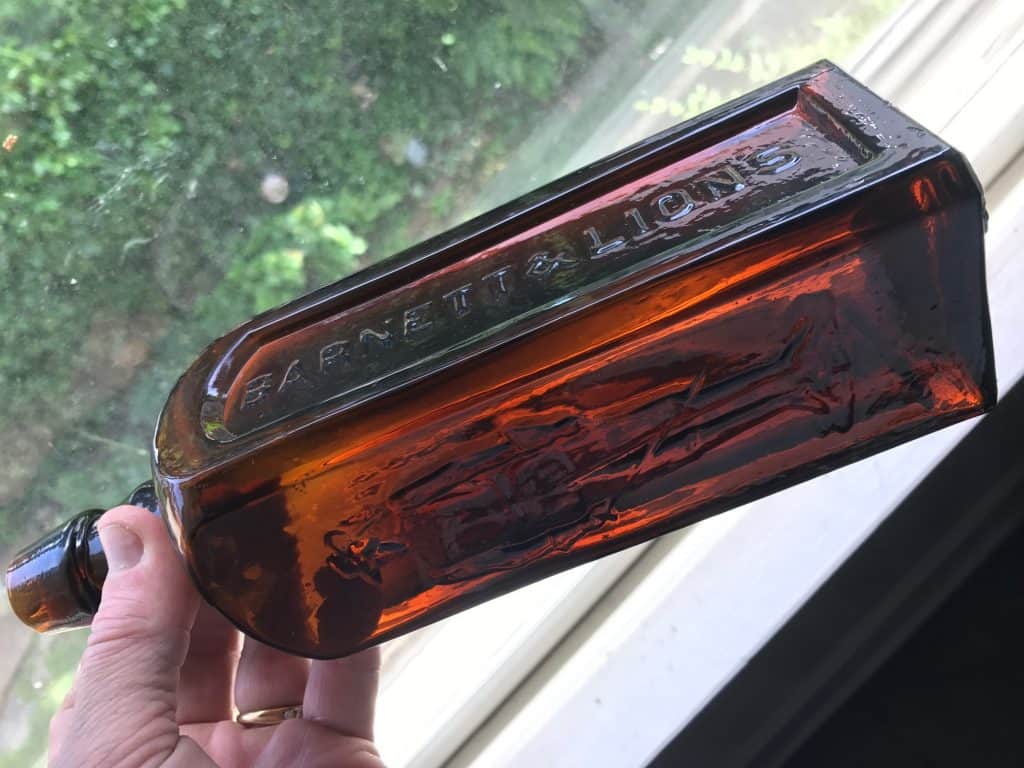 Some of their advertising states that they provided “BEAUTIFUL FRAMED CARDS FOR BAR-ROOMS, SALOONS, ETC.” with their product delivery. Easy bet that it was loaded with alcohol even though they said lots of veggies and herbs. Wouldn’t it be great to find a surviving card?

Unfortunately Barnett & Lion were sued by Udolpho Wolfe of Schnapps fame and their product didn’t last too long. Michael Barnett would also die in 1870 which has a tendency to halt a relationship. The following was recorded:

Received January 30th, 1867, and on the 31st day of the same month and year, served copy of the within writ of injunction personally on Michael Barnett of the firm of Barnett and Lion, who told me that although in said writ he was called Manuel Barnett, he accepted service of the same, because he knew he was the party intended to be served. Returned same day.–Sheriffs fees $1.00.

What is interesting here is that Michael Barnett’s wife was named Sophia Adelaide Wolfe. She was born in Richmond, Virginia, in 1831, and her father, Michael B. Wolfe, was born in the same city in 1809. Michael B. Wolfe settled at Yazoo City, Mississippi, in 1829, buying land there and developing an extensive plantation. I need to run this down.

Two vertical advertisements from The New Orleans Crescent. The left-most ad is dated 15 February 1866 and the right most is dated 25 February 1866. Note the spelling difference with Lyon and Lion. The bottles is embossed Lion’s. Odd that the street addresses are different unless they moved in that 10-day period. 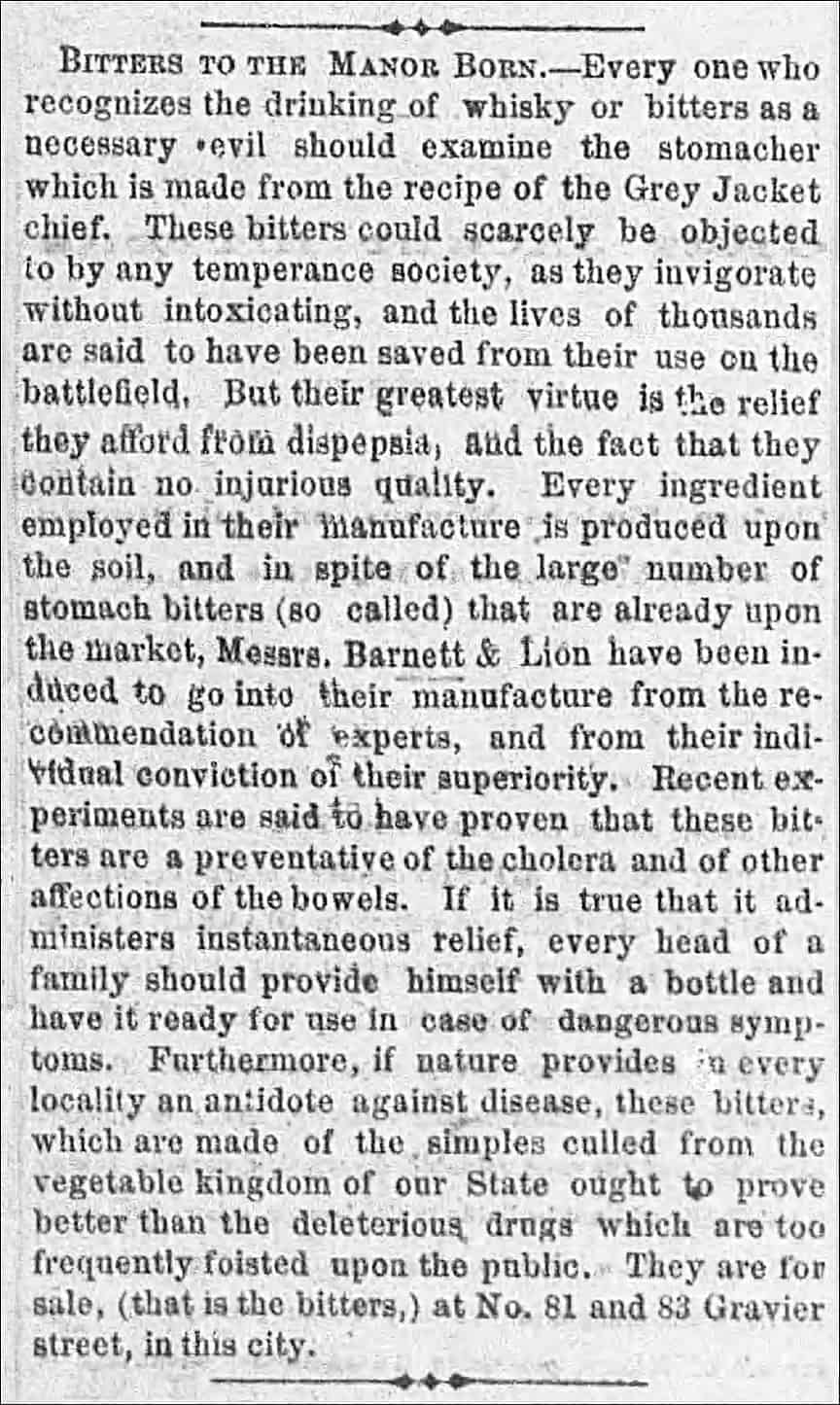 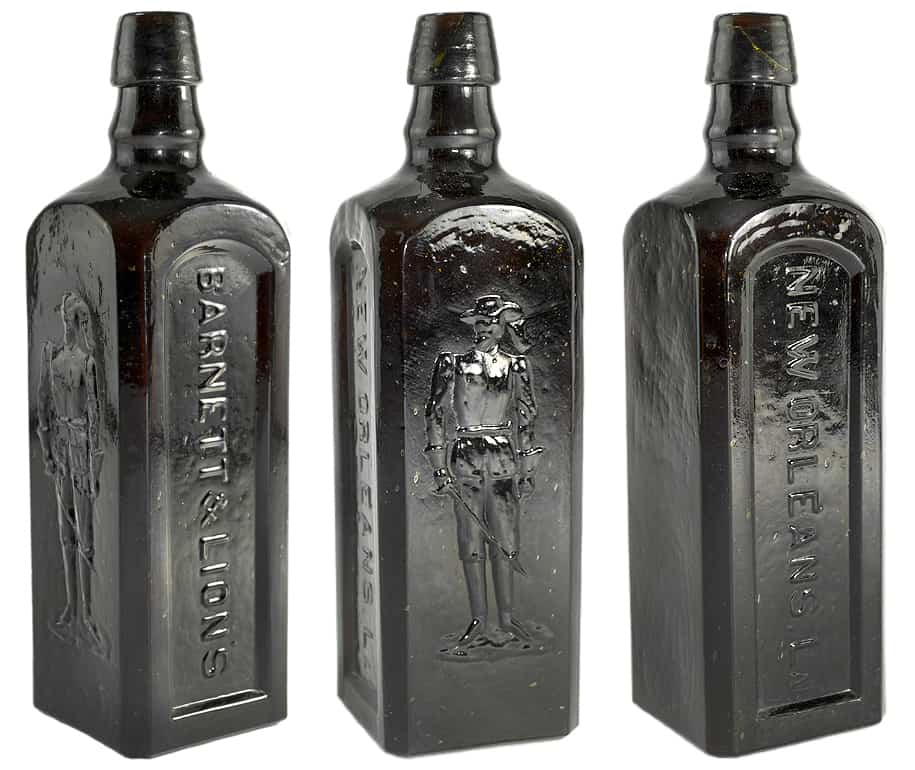 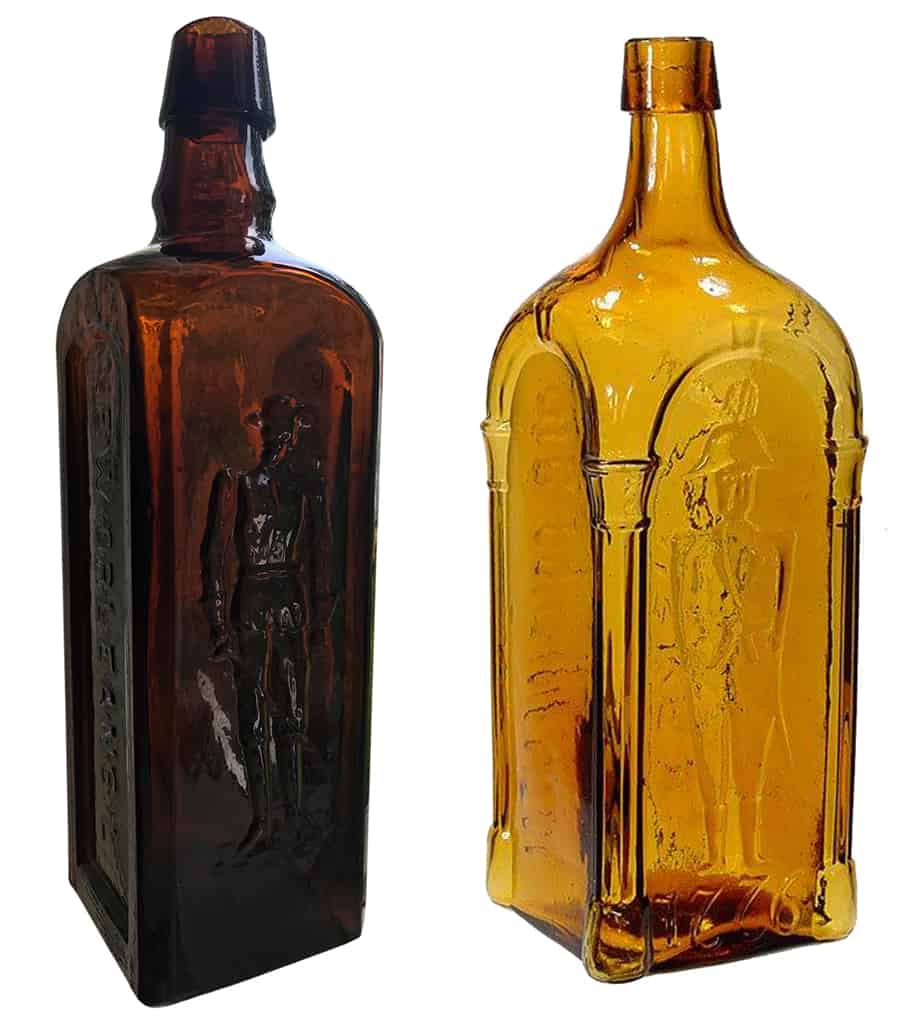 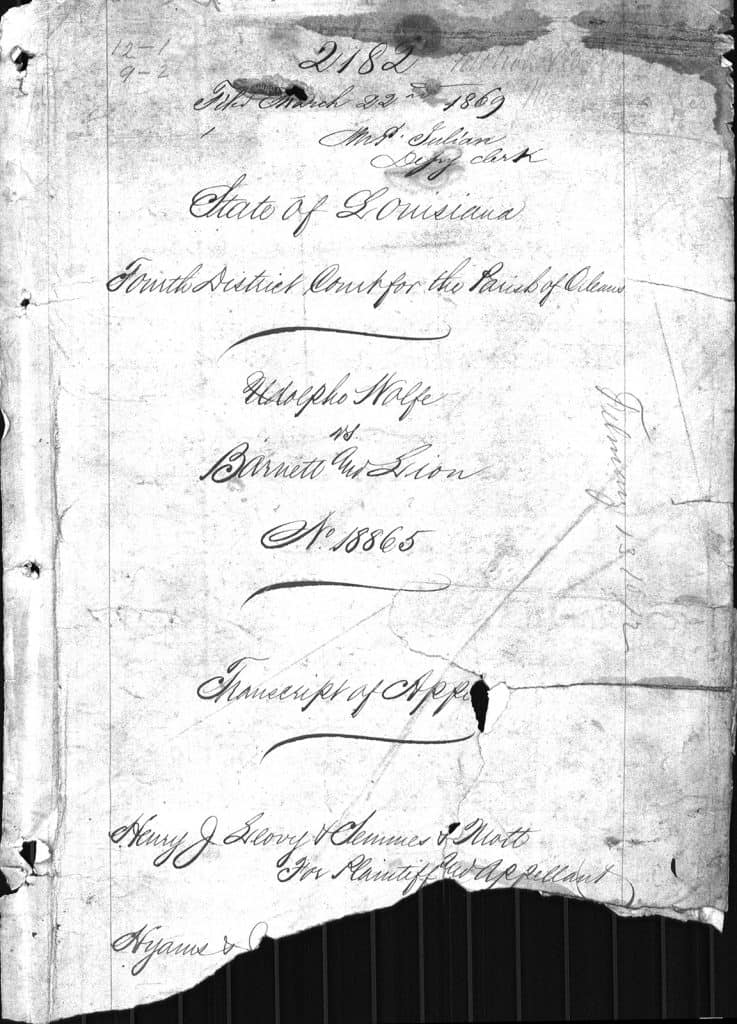 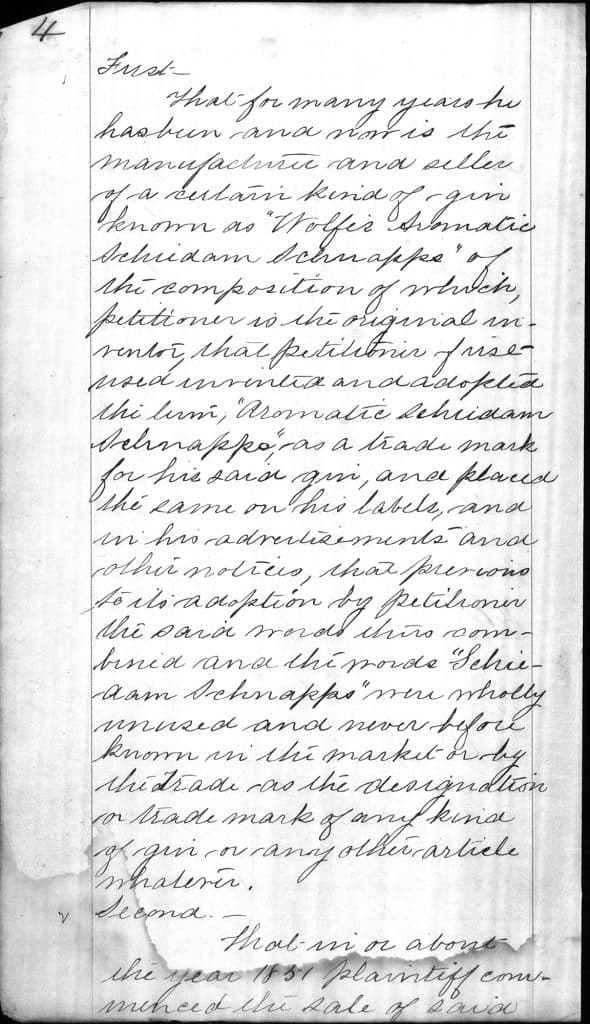 [from the History of New Orleans, Volume 3] Michael Barnett. Jr., was born in London in 1819. and in 1837 came to America. and at that time first established the family name in New Orleans. He left this city in 1850 and went out to California, being several months in the overland trip to San Francisco. He was in the coast metropolis about three years, and while there established the Great Western Distillery. When he came east he was accompanied by his wife and two children, and they made the journey down the coast by vessel to the Isthmus, crossed Panama on burros and thence by boat back to New Orleans, where Michael Barnett formed a partnership with Herman Lion and engaged in the wholesale liquor business for many years.

During the war between the states he was a member of the Home Guards. His death occurred in 1870.

The wife of this old time New Orleans merchant was Sophia Adelaide Wolfe. She was born in Richmond, Virginia, in 1831, and her father, Michael B. Wolfe, was born in the same city in 1809. Michael B. Wolfe settled at Yazoo City, Mississippi, in 1829, buying land there and developing an extensive plantation. When the war broke out he freed his slaves, and he died on the plantation in 1865. Michael Wolfe married Hettie Levy, who was born at Richmond in 1812 and died at New Orleans in 1882.

1850: Michael Barnett left New Orleans in 1850 and went out to California, being several months in the overland trip to San Francisco. He was in the coast metropolis about three years, and while there established the Great Western Distillery. – History of New Orleans 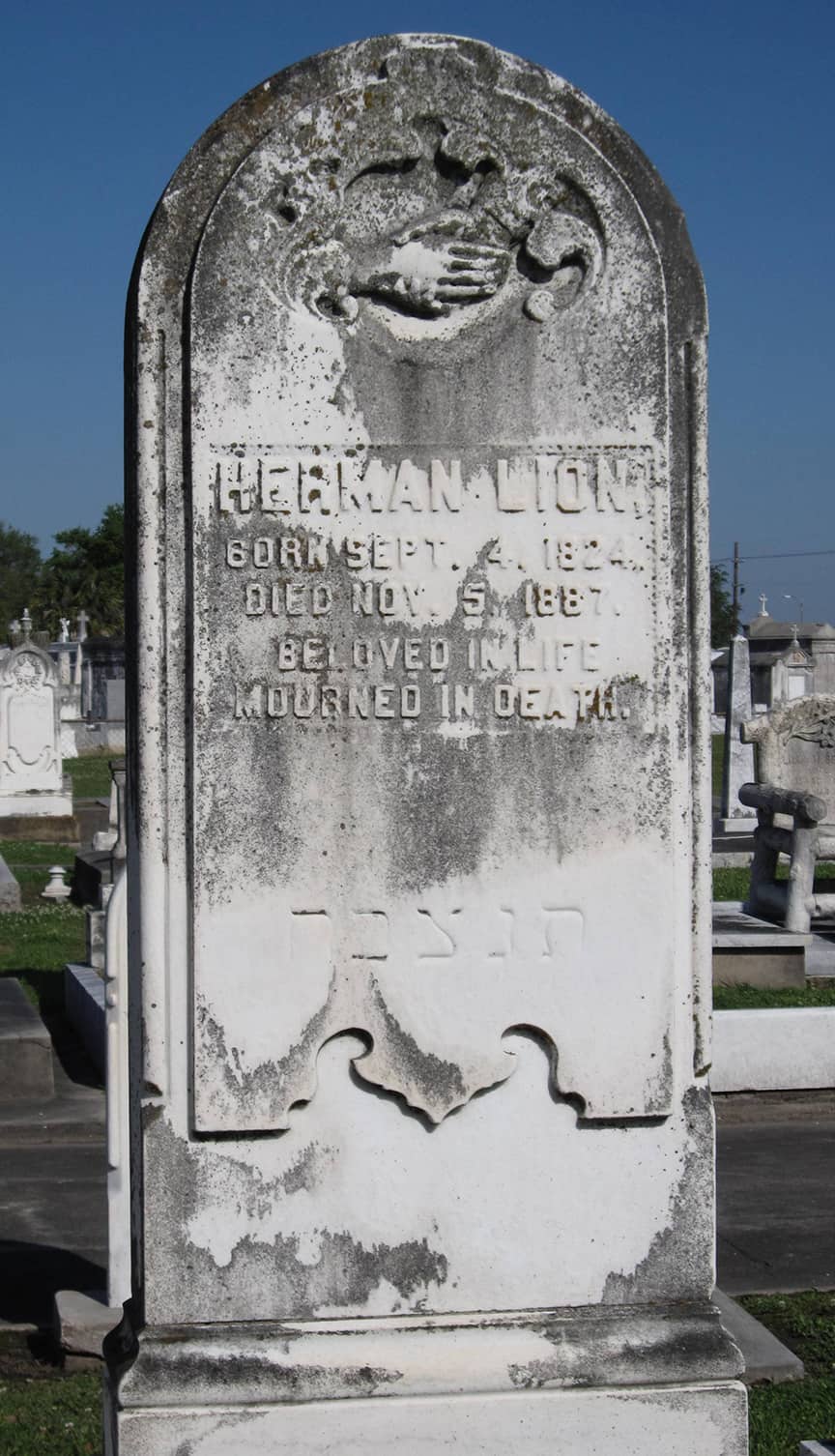 Ferdinand Meyer V is a native of Baltimore, Maryland and has a BFA in Fine Art and Graphic Design from the Kansas City Art Institute and School of Design. Ferdinand is the founding Principal of FMG Design, a nationally recognized design consultation firm. Ferdinand is a passionate collector of American historical glass specializing in bitters bottles, color runs and related classic figural bottles. He is married to Elizabeth Jane Meyer and lives in Houston, Texas with their daughter and three wonderful grandchildren. The Meyers are also very involved in Quarter Horses, antiques and early United States postage stamps. Ferdinand is the past 6-year President of the Federation of Historical Bottle Collectors and is one of the founding members of the FOHBC Virtual Museum.
View all posts by Ferdinand Meyer V →
This entry was posted in Advertising, Bitters, Civil War, History, Liquor Merchant, Medicines & Cures, Spirits and tagged Barnett, bitters, Confederate, Dale Mlasko, Gray, Hermann Lion, Jacket, lion, Michael Barnett, New Orleans, Soldier, Southern, spirit, Udolpho Wolfe. Bookmark the permalink.