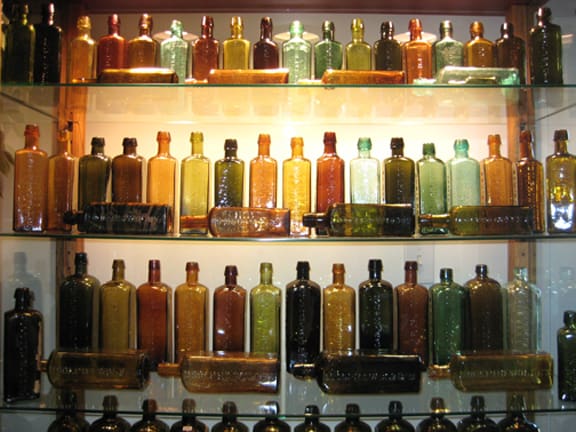 I have to admit, many times when I write something about a brand or bottle is not because I know something, it is because I want to learn more and I am always curious, just like the monkey. For example, since I started bottle collecting, I have always wanted to know more about the Schnapps bottles that come in so many great brand names, sizes and glass colors. I have seen and even previously posted about the great Tom Doligale collection. So anyway, what is schnapps, what is schiedam and who is this Udolpho Wolfe? Why are they found all over the world? Were they a drink or a medicine, or both?

a stock from 6,000 to 10,000 cases of Aromatic Schiedam Schnapps was kept in bond to supply the export trade to the West Indies and Central America, and not less than 10,000 cases were usually in store to meet the demands of the American trade. 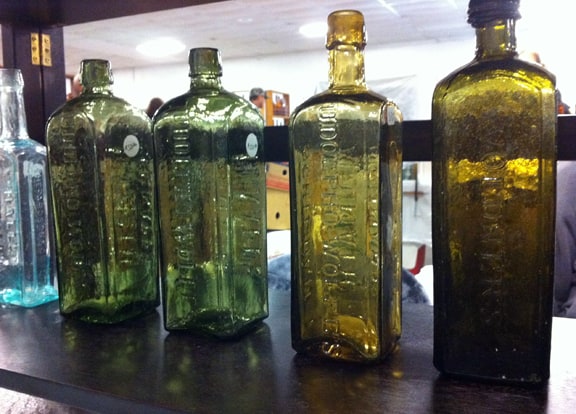 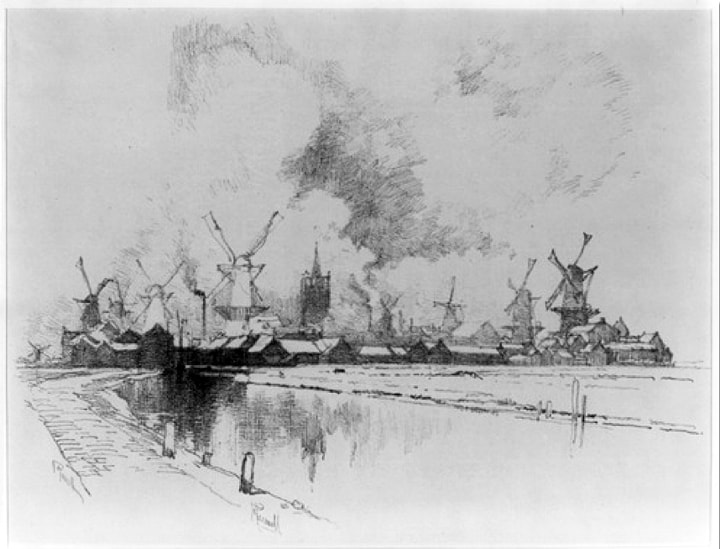 The important thing to know is that Schnapps is Gin and Schiedam is a city and municipality in the province of South Holland in the Netherlands. The city is known for its historical center with canals, and for having the tallest windmills in the world. Schiedam is also famous for the distilleries and malthouses and production of jenever (gin) so much so that in French and English the word schiedam (usually without a capital s) refers to the town’s Holland gin. This was the town’s main industry during the early Industrial Revolution in the 18th and 19th century. (Wikipedia)

In brands alone I find the following: 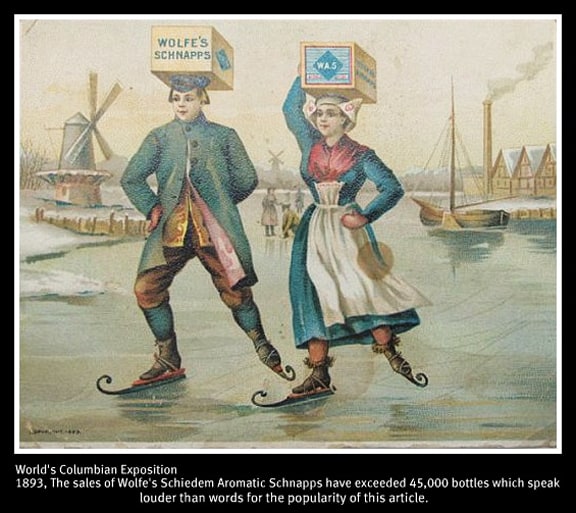 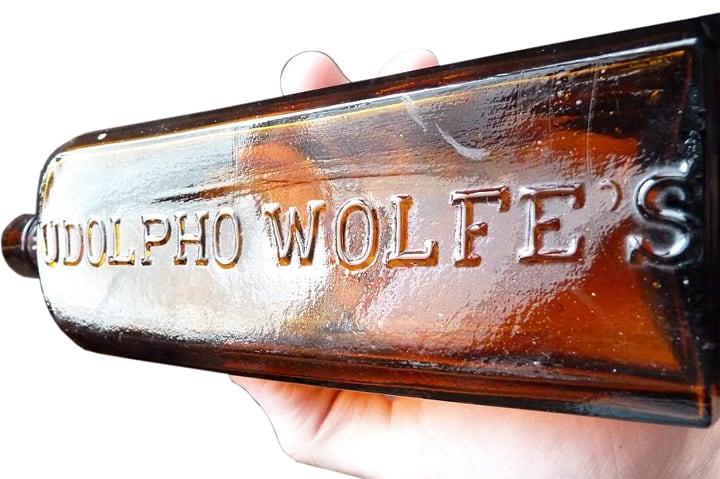 The brand most of us are familiar with is Udolpho Wolfe’s Aromatic Schiedam Schnapps. Udolpho Wolfe was one of the most prominent and highly esteemed merchants of New York. He was of German descent, his father, Benjamin Wolfe, having emigrated to Virginia in 1774. During the Revolutionary War. Benjamin Wolfe served un General George Washington and reached the rank of Major. In 1812 he again joined the army and had command of the troops in Richmond.

Udolpho Wolfe was born in Richmond, Virginia and received his education from Charlottesville, and came to New York in 1825. He commenced business in New York in 1826 and for many years was extensively engaged in the importation of wines and liquors.

In 1848, Mr. Wolfe first introduced into this country the brand of gin which has since required such unprecedented popularity, under the name of aromatic schiedam schnapps. It was made at his own distilleries at Schiedam, Holland, a city long famous for its production in this line.

The New York office and warehouses of the company were located at 22 Beaver Street. It was noted that a stock from 6,000 to 10,000 cases of Aromatic Schiedam Schnapps was kept in bond to supply the export trade to the West Indies and Central America, and not less than 10,000 cases were usually in store to meet the demands of the American trade. (Primary source – Wolfe’s Aromatic Schiedam Schnapp’s – New Zealand Herald, Volume XI, Issue 4019, 29 September 1874)

It is made from the best barley that can be selected in Europe, with the essence of an aromatic Italian berry, of acknowledged and extraordinary medicinal properties.

As I expected, the gin was pushed heavily for medicinal purposes just like bitters as you can see from the copy in this 1860 New York advertisement:

A medicinal diet drink of eminently salutary qualities manufactured by himself exclusively at his factory at Schiedam, in Holland.

It is made from the best barley that can be selected in Europe, with the essence of an aromatic Italian berry, of acknowledged and extraordinary medicinal properties. It has long since acquired a higher reputation, both in Europe and America, than any other diuretic beverage.

In gravel, gout and rheumatism, in obstructions of the bladder and kidneys, and in general debility, its effects are prompt, decided and invariably reliable. And it is not only a remedy for these maladies, but in all cases in which they are produced by drinking bad water, which is almost universally the cause of them, it operates as a sure preventive.

The distressing effect upon the stomach, bowels and bladder of travelers or new residents, and all persons unaccustomed to them, produced by the waters of nearly all our great inland rivers, like the Ohio, Mississippi and Alabama, from the large quantity of decayed vegetable matter contained in them in a state of solution, is well known, as is also that of the waters of the limestone regions, in producing gravel, calculi and stone in the bladder. The Aromatic Schiedam Schnapps is an absolute corrective of these injurious properties of bad water, and consequently prevents the diseases which they occasion. It is also found to be a cure and preventive of fever and ague, a disease caused by the conjoint effects of vegetable malaria in the atmosphere and vegetable putrescences in the waters of those districts in which it principally prevails. The Aromatic Schiedam Schnapps is consequently in great demand by persons traveling or about to settle in those parts of the country especially, as well as by many in every community where it has become known, on account of its various other remedial properties.

In all cases of a dropsical tendency, it is generally the only remedy required, when adopted in the early stages of the disease. In dyspepsia maladies, when taken in proper quantities, as a diet drink, and especially at dinner, it is found, by uniform experience, to be eminently efficacious in the most obstinate cases, when even the best of the usual remedies have failed to afford more than temporary relief.

Its judicious adoption in connection with the principal meals, on when a sense of exhaustion dictates its use, never fails to relieve the debility attendant upon protracted chronic maladies, low temperament and exhausted vital energy, by whatever cause induced. These are facts to which many of the most eminent medical men both in Europe and the United States, have borne testimony, and which are corroborated by their highest written authorities.

Put upon quart and pint bottles, in cases of one and two dozen each, with the proprietor’s name on the bottle, cork, and facsimile of his signature on the label. For sales by all druggists and country merchants in the United States. UDOLPHO WOLFE. 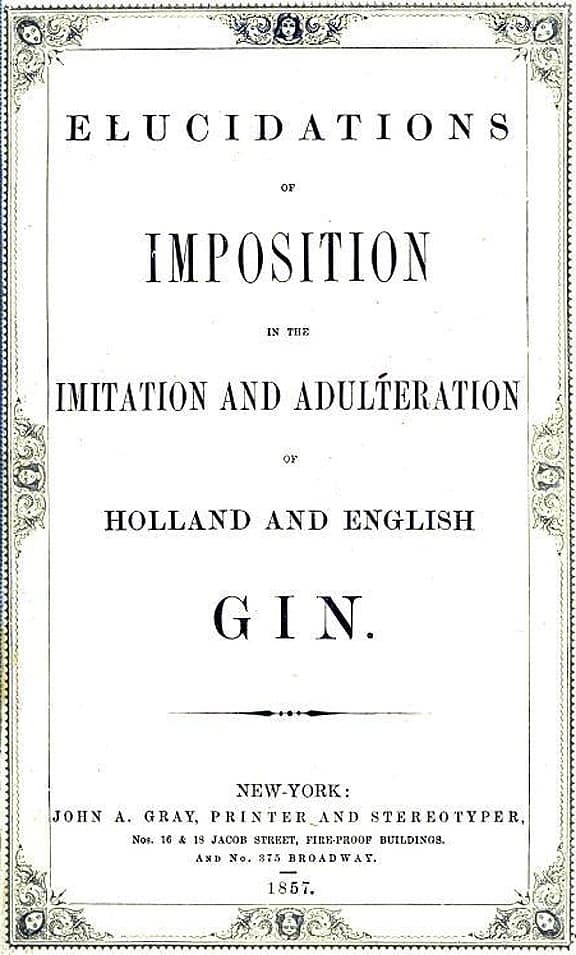 Wolfe’s Schiedam Schnapps – Elucidations or Imposition in the Imitation and Adulteration of Holland and English Gin – Udolpho Wolfe, New York – 1857 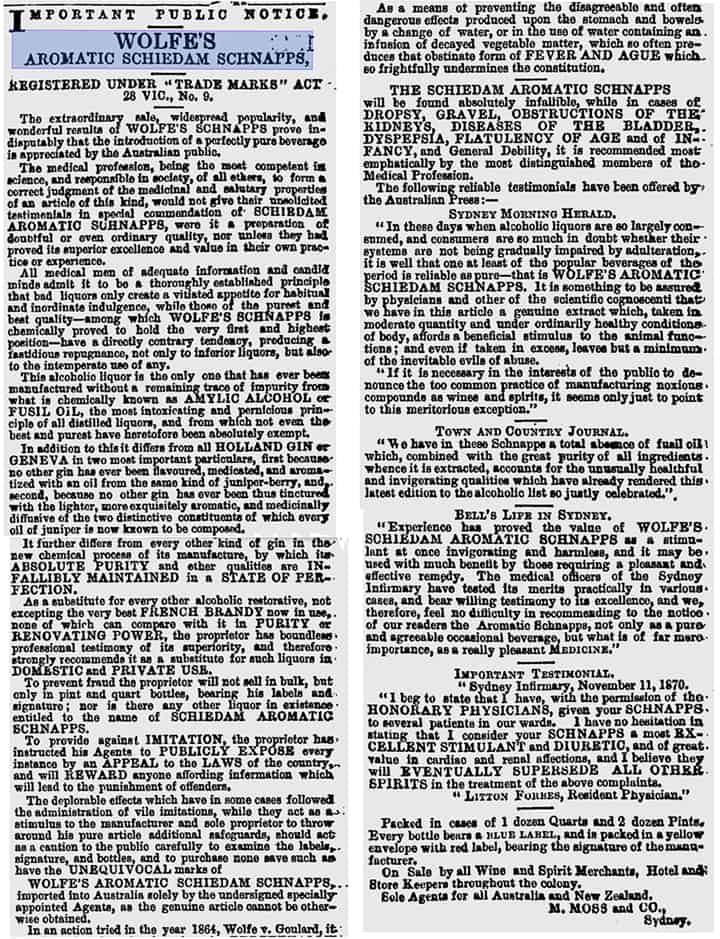 Read More: Wolfe’s Schiedam Schnapps – Elucidations or Imposition in the Imitation and Adulteration of Holland and English Gin