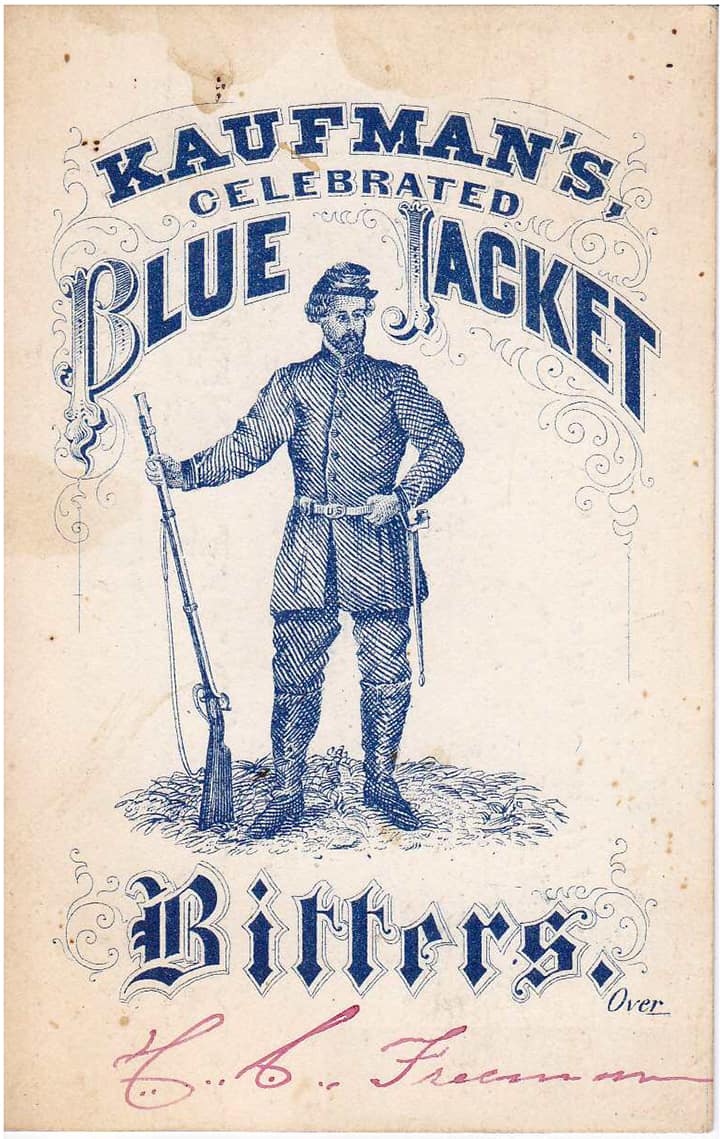 While working on the post for the Dr. B. H. Kauffman Stomach Bitters from Lancaster, Pennsylvania, I checked the Joe Gourd collection inventory list to see if Joe was holding any paper ephemera for the brand. I doubted it as the bottle was very old and extremely rare. Advertising trade cards came later in most cases. What I did see was that he possessed other bitters material for other Kaufman brands. Note the spelling differences, “Kaufman” vs. “Kauffman” vs “Kaufmann”. The first files Joe provided were for Kaufman’s Celebrated Blue Jacket Bitters, which we will look at now. The second set was for Dr. Kaufmann’s Sulfur Bitters. Note yet another spelling for “Kaufmann”.

Read: He had a new variety of bitters known as Red Jacket Bitters

Well, as said, Joe has obliged and has sent in some fine advertising material for both brands. The two images (front and back) of the Blue Jacket Bitters trade card used in this post are from his collection. The Sulphur Bitters post will probably be tomorrow. 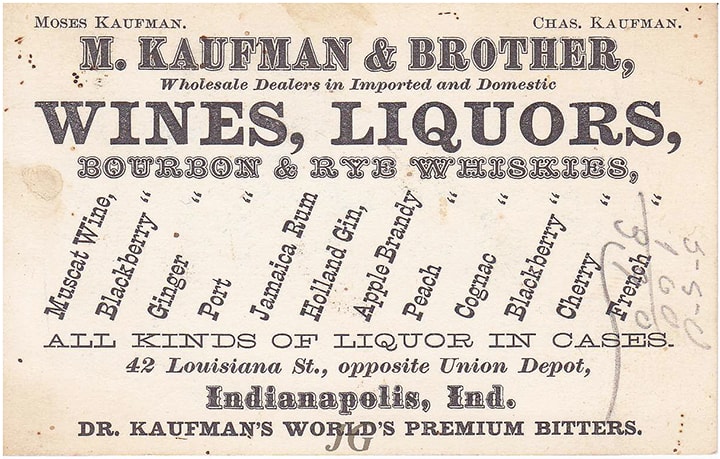 Looking at the back of the Kaufman’s Celebrated Blue Jacket Bitters advertising trade card above, we see the names Moses Kaufman and Charles Kaufman doing business as M. Kaufman & Brother at 42 Louisiana Street in Indianapolis, Indiana. Seems like we were in Indianapolis earlier in the week. Read: What was peened out of the Apple Brandy Bitters? The front of the card has a great illustration of a union soldier standing with his rifle. On the front of the card, there is a mysterious signature in red that looks to read, “C. A. Freeman” or something to the effect. What is that all about? There is also a reference for Dr. Kaufman’s World’s Premium Bitters on the reverse of the card. Is this the same or a different bitters?

The K 16.5 listing above from Bitters Bottles Supplement is obviously for the subject Joe Gourd trade card.

The K. 15.5 listing above from Bitters Bottles is a surprise. Here we have a similar product reference in Indianapolis in 1871 by Charles Kaufman. Remember, there is a Charles Kaufman listed on the back of the trade card. One of the brothers, a father or son? 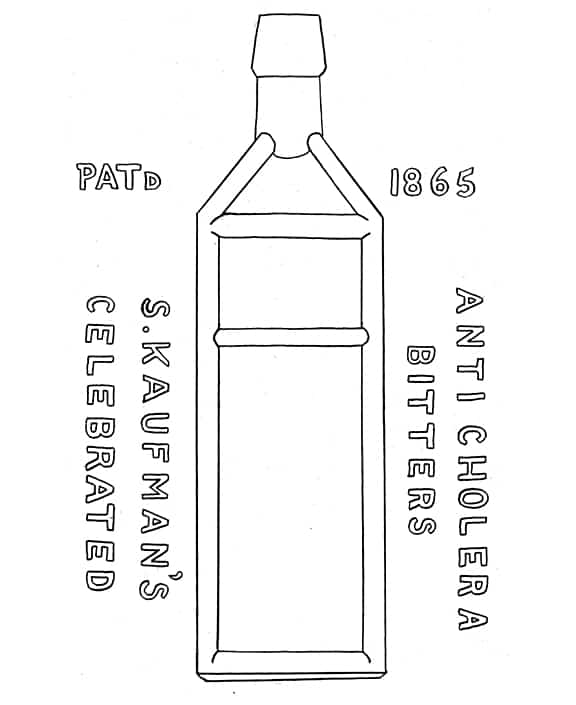 The K 16 listing above from Bitters Bottles is another big surprise as we have a great bottle that I have never even seen a picture of by Solomon Kaufman in Indianapolis. Solomon Kaufman is a new name in the mix. 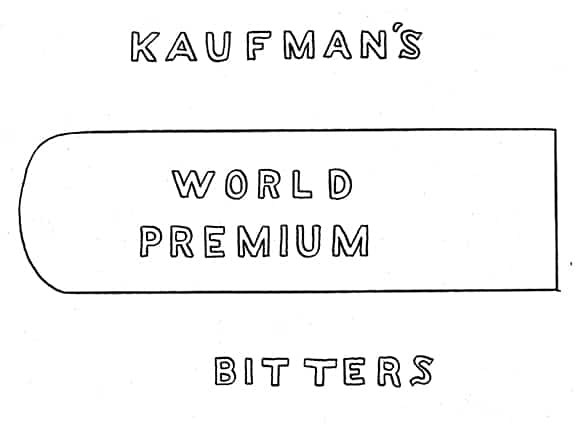 Wow, another surprise. The K 17 listing above from Bitters Bottles pretty much proves that the Kaufman Blue Jacket Bitters and the Kaufman World Premium Bitters are different products.

Moses Kaufman and Charles Kaufman, doing business as M. Kaufman and Brother, were wholesale dealers and importers of wines, liquors, bourbon and rye whiskey’s along with just about every other type of spirit. They also were the proprietors of the K 16.5, Kaufman’s Celebrated Blue Jacket Bitters and K.17, Kaufman’s World Premium Bitters. These obviously are two different bitters. An example or two of the World Premium Bitters is known to exist. No example of the Blue Jacket Bitters is known. This very well could be an applied top square.

I found records that state that Moses was born in Affaltrach, Baden-Württemberg, Germany on 07 January 1834. He arrived in New York in 1853 on the Sea Queen from Le Havre, France, the ship voyage originating in Baden, Germany.

Moses and Charles Kaufman were only joined in business in 1869 in Indianapolis, Indiana so the trade card is much older than thought which is very interesting. The  brothers addressed at 42 Louisiana Street, opposite the Union Depot. This was post Civil War but not by much so obviously they were capitalizing on sales to post Civil War America and Grand Army of the Republic veterans.

Moses Kaufman dies at the age of 85 in Indianapolis on 30 October 1919. He sold liquors throughout the 1880s and was retired according to the 1890 Federal Census. It is not known what happened to Charles, his brother.

This post has some other very interesting Kaufman characters. Aaron and Solomon Kaufman were distillers in 1871. There was also a Simon Kaufman, who was also in the liquor business the same year. These guys had to all be related. Still trying to figure that out. The kingpin here seems to be Solomon. He is the one who put out the Kaufman’s Celebrated Anti-Cholera Bitters.

1853: Moses Kaufman arrives on the Sea Queen as a passenger in New York from Le Havre, France originating in Baden, Germany

Ferdinand Meyer V is a native of Baltimore, Maryland and has a BFA in Fine Art and Graphic Design from the Kansas City Art Institute and School of Design. Ferdinand is the founding Principal of FMG Design, a nationally recognized design consultation firm. Ferdinand is a passionate collector of American historical glass specializing in bitters bottles, color runs and related classic figural bottles. He is married to Elizabeth Jane Meyer and lives in Houston, Texas with their daughter and three wonderful grandchildren. The Meyers are also very involved in Quarter Horses, antiques and early United States postage stamps. Ferdinand is the past 6-year President of the Federation of Historical Bottle Collectors and is one of the founding members of the FOHBC Virtual Museum.
View all posts by Ferdinand Meyer V →
This entry was posted in Advertising, Bitters, Civil War, Ephemera, History, Liquor Merchant, Questions, Spirits and tagged advertising, bitters, blue, card, Celebrated, Charles, Civil, Germany, Gourd, indiana, Indianapolis, Jacket, Kaufman, liquors, Louisiana, Moses, trade, war, Wine. Bookmark the permalink.