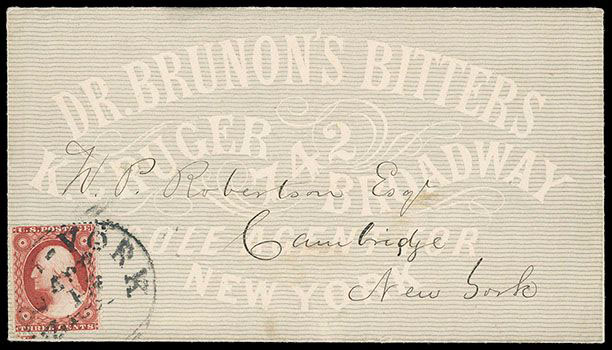 To Hotel Keepers, Restaurants, Druggists, Grocers and the Public 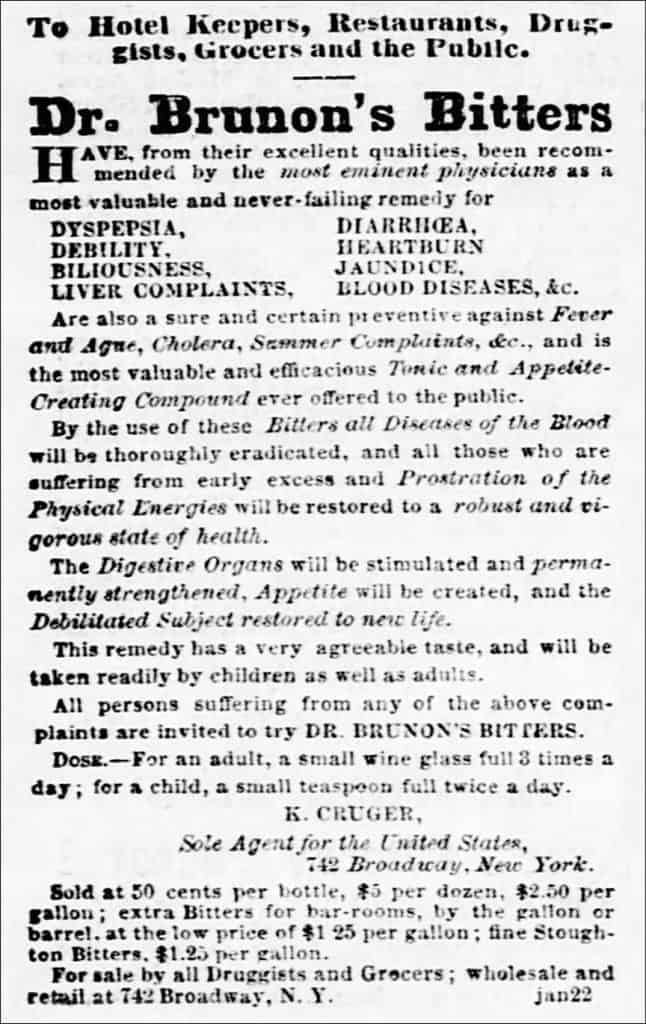 A simple post here for an 1859 bitters advertisement I found the other day in The Ottawa Free Trader. Dr. Brunon’s Bitters would cure just about anything out there. The bitters sold for 50 cents per bottle, $5 per dozen, $2.50 per gallon and you could get extra Bitters for bar-rooms, by the gallon or barrel at the low price of $1.25 per gallon. I wonder how they shipped the barrels?

The bitters is listed as B 239 in Bitters Bottles by Carlyn Ring and Bill Ham.

In Bitters Bottles Supplement 2 an advertising envelope is listed. This envelope is pictured at the top of this post and is from the Ben Swanson collection.

Dr. Felix Brunon, from Warsaw, Poland, was a physician, graduating from the University of Pennsylvania. He practiced in the Callowhill District of Philadelphia which has kind of gone away as it was bisected by I-95. His office was at Old York Road and Callowhill Street. Read: Hidden Philadelphia 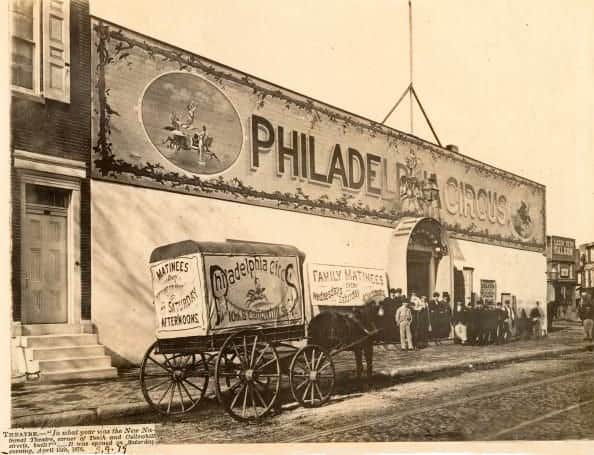 Philadelphia Circus, 10th and Callowhill Streets. Somewhat nearby to Dr. Brunon but long forgotten too.

Here is a string of ads all centered around 1859 which was the year the bitters first appeared. Brunon’s remedies purportedly cured Dyspepsia, Debility, Biliousness, Liver Complaints, Diarrhea, Heartburn, Jaundice, Blood Diseases, Fever & Ague, Cholera and Summer Complaints, whatever that was.

His goop also cured “Secret Diseases” for Women and Irregularities of Menstruation. Other assertions stated that his bitters cured Syphilis, Gonorrhea, Gleet, Strictures, Affection of the Kidneys and Bladder etc. I find it rather amazing that it could not make a headache go away. I suppose you could chase it with Headache Bitters.

Dr. Brunon even says in some advertisements that he cured over 11,000 patients in 3 years! His bitters was represented by K. Cruger, who was the sole agent the United States. Cruger addressed at 742 Broadway in New York City.

I am not aware of any bottles in collections. Could have been a labeled bitters on an aqua bottle or embossed aqua is my guess. Where are they all? 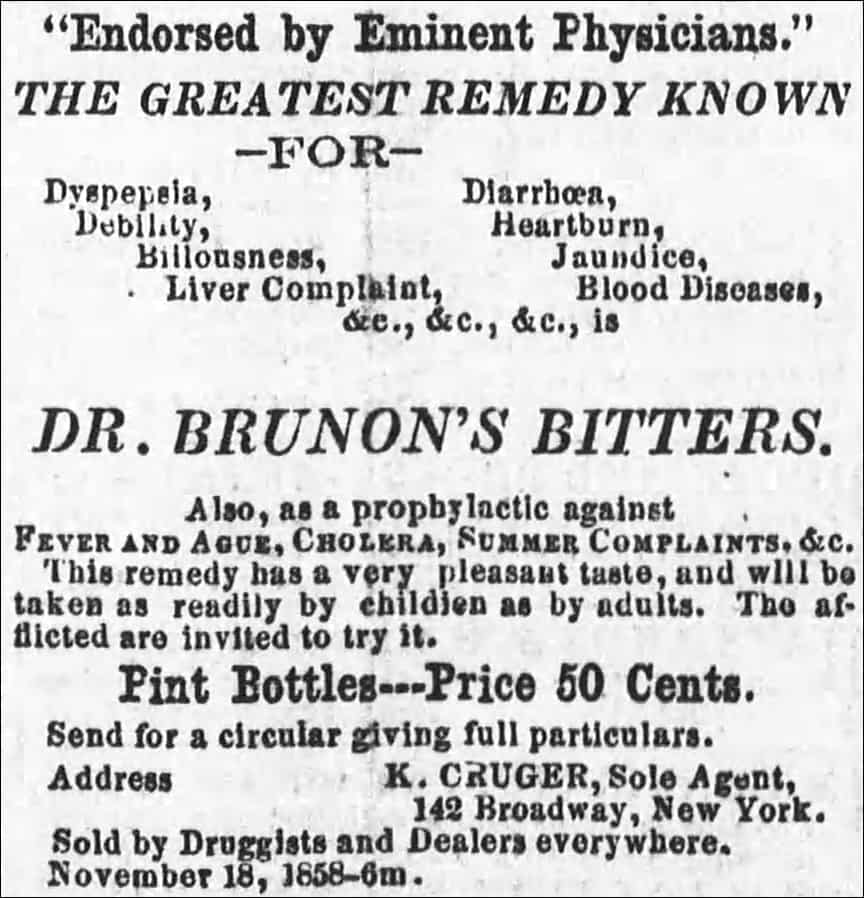 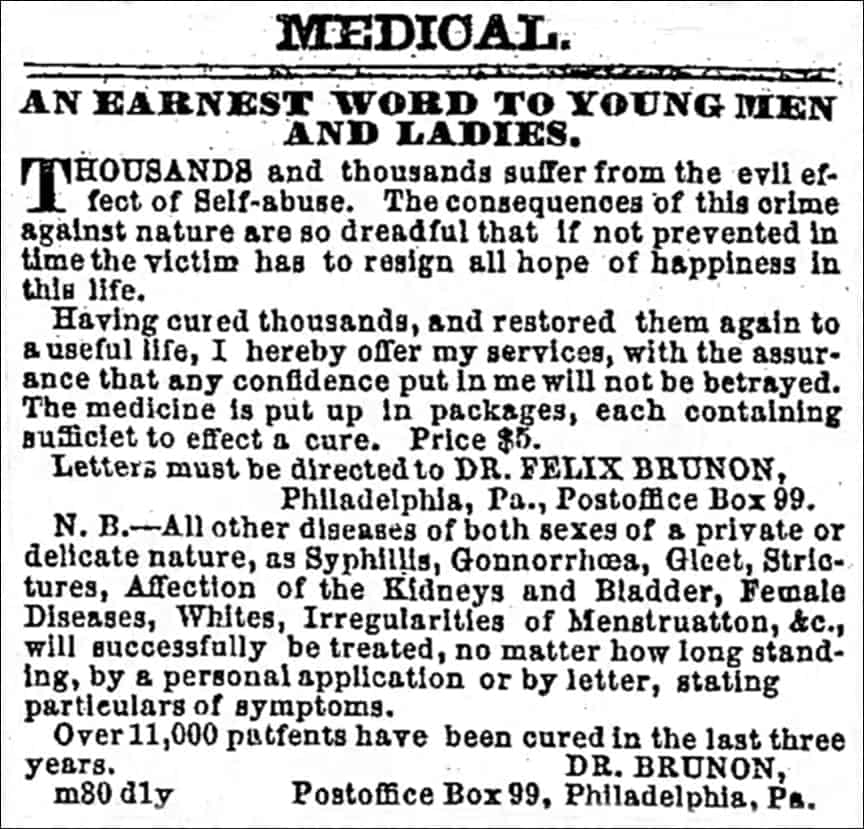 An Earnest Word to Young Men and Ladies advertisement – The Louisville Daily Courier, Tuesday, May 31, 1859 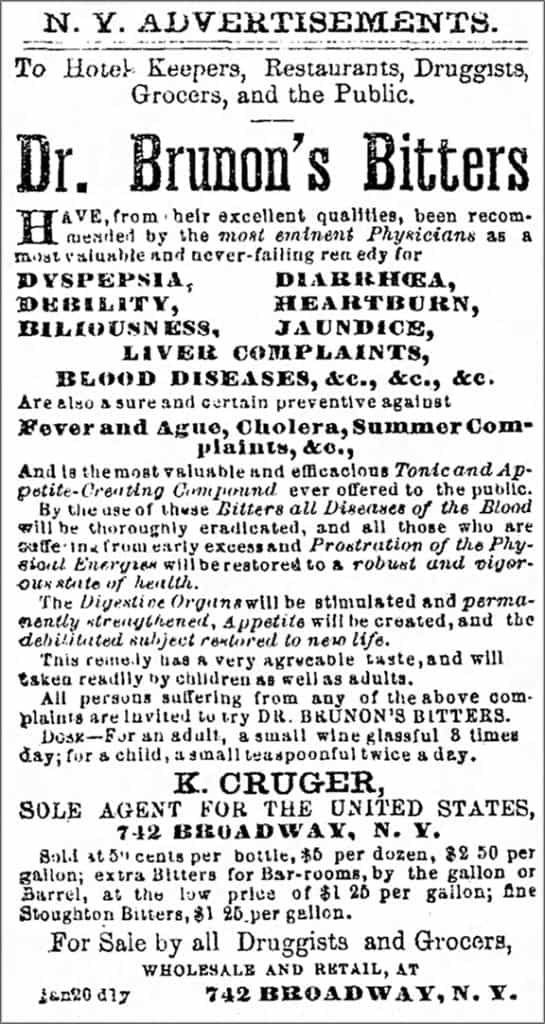 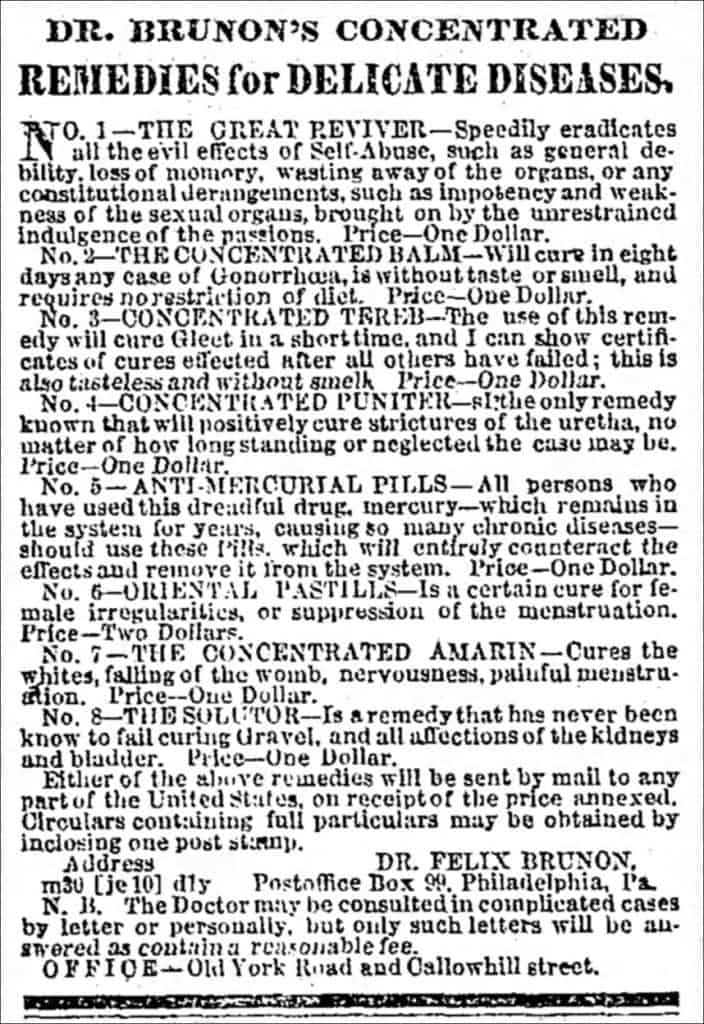 Ferdinand Meyer V is a native of Baltimore, Maryland and has a BFA in Fine Art and Graphic Design from the Kansas City Art Institute and School of Design. Ferdinand is the founding Principal of FMG Design, a nationally recognized design consultation firm. Ferdinand is a passionate collector of American historical glass specializing in bitters bottles, color runs and related classic figural bottles. He is married to Elizabeth Jane Meyer and lives in Houston, Texas with their daughter and three wonderful grandchildren. The Meyers are also very involved in Quarter Horses, antiques and early United States postage stamps. Ferdinand is the past 6-year President of the Federation of Historical Bottle Collectors and is one of the founding members of the FOHBC Virtual Museum.
View all posts by Ferdinand Meyer V →
This entry was posted in Advertising, Bitters, Druggist & Drugstore, History, Medicines & Cures, Remedy and tagged bitters, Callowhill, Felix Brunon, K. Kruger, New York, Philadelphia, york. Bookmark the permalink.