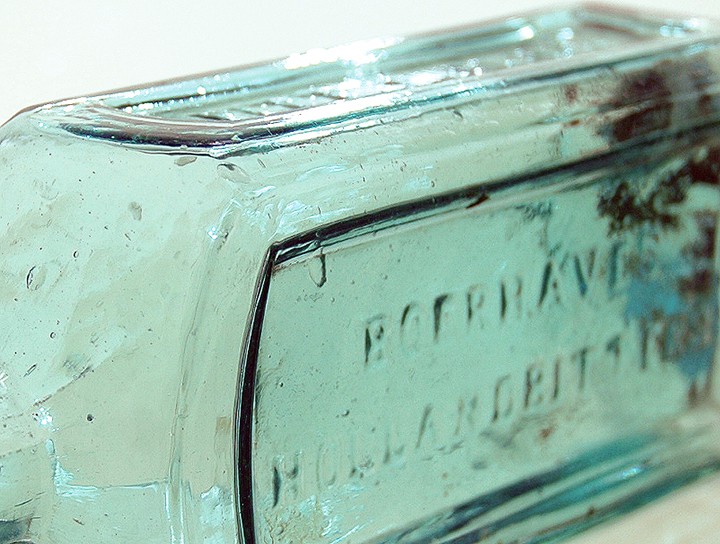 Jeff Wichmann currently has a Boerhave’s Holland Bitters up on his American Bottle Auctions “For Sale” page that prompted me to pull my example out of a digital folder. The top two pictures represent my bottle. Another rather exciting aqua bitters that can rock your socks or at least mine. I am surprised it still available on Jeff’s site. This bitters collector suggests “Buy”. The price is right too. 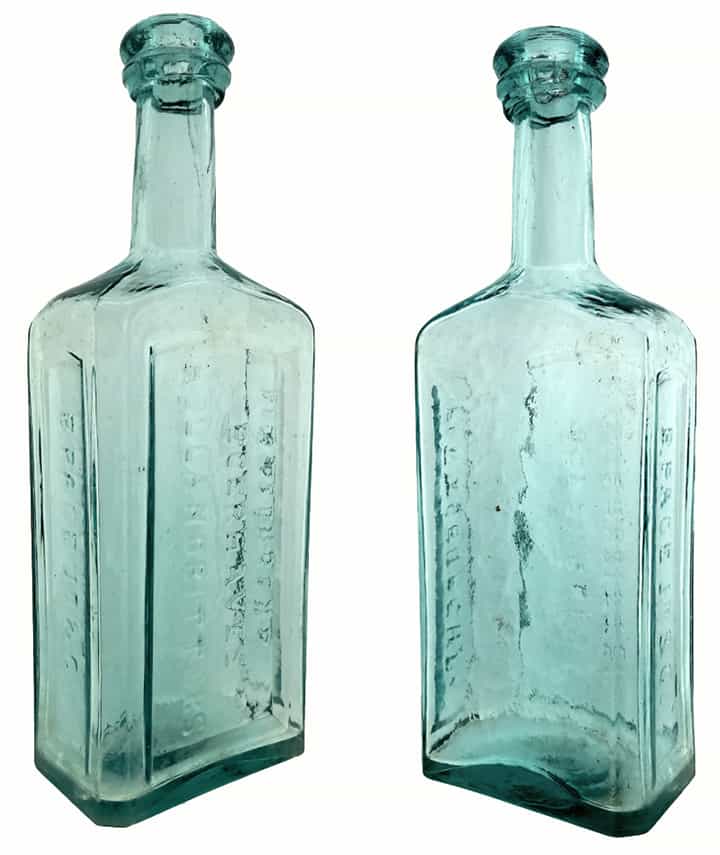 BOERHAVES HOLLAND BITTERS B. PAGE Jr. & CO. PITTSBURGH Pa. – (B 134). 7 ¾” with applied top and smooth base. An early bottle, the Boerhave name is not unknown in bottle circles. This is a neat one with the huge top, long neck and loads of whittle and crudity in a bluish aqua. A lot going on in 7 ¾”. The base looks very early. A tiny bit of exterior stain but generally a grade 9.4 bottle. Check out the funky embossing. – American Bottle Auctions 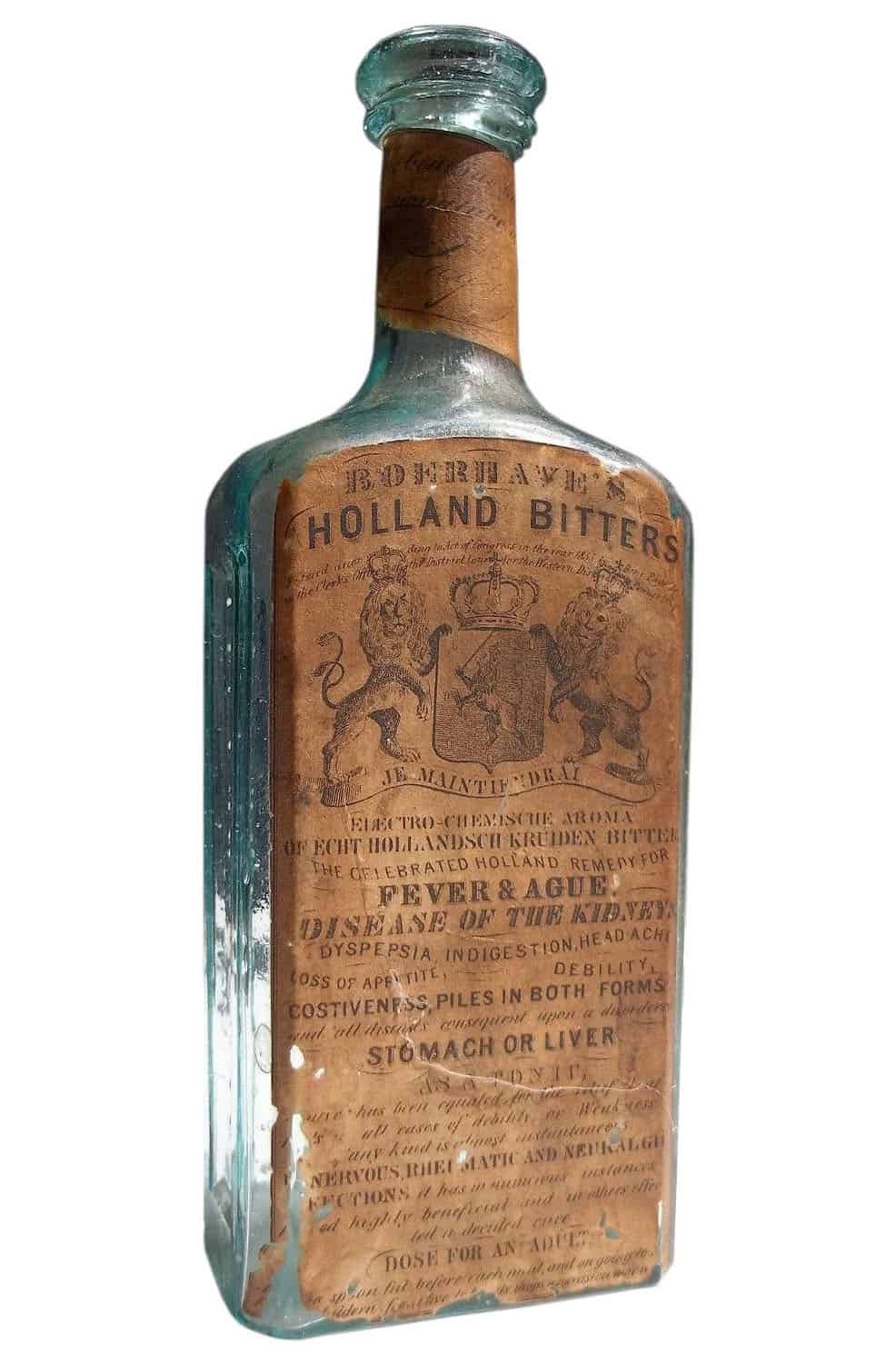 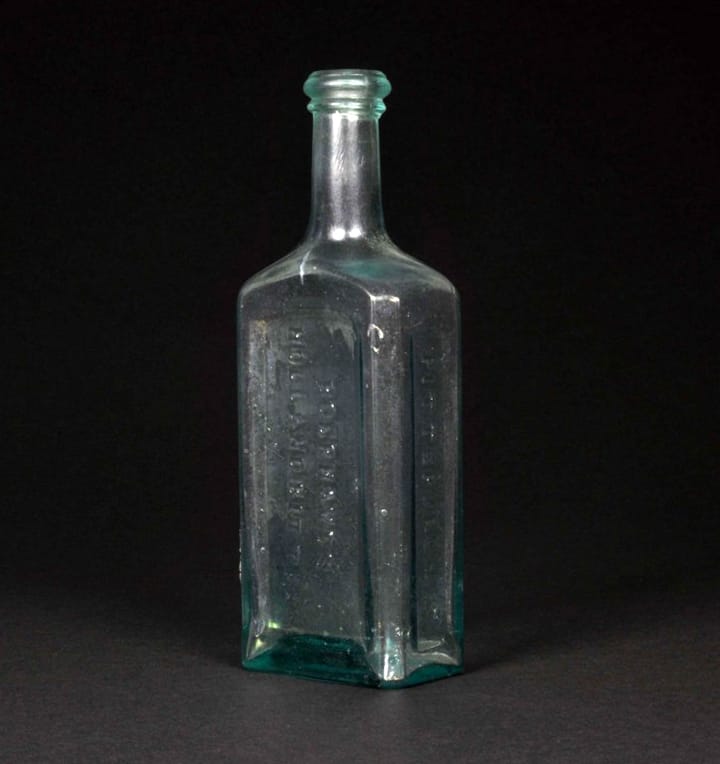 Boerhave’s Holland Bitters was made by Benjamin Page Jr. & Company in Pittsburgh, Pennsylvania. They were the sole proprietors and advertised themselves as Pharmacists and Chemists. They said their product was a purely vegetable compound and remedy for dyspepsia, kidney disease, liver complaint, weakness of any kind, fever and ague plus a whole group of other ailments. This is typical of most bitters. The product was advertised from 1856 to about 1860 heavily in newspapers with a few spot advertisements in 1871 in Davenport, Iowa. One has to wonder if they were selling excess eastern inventory at such a late date. 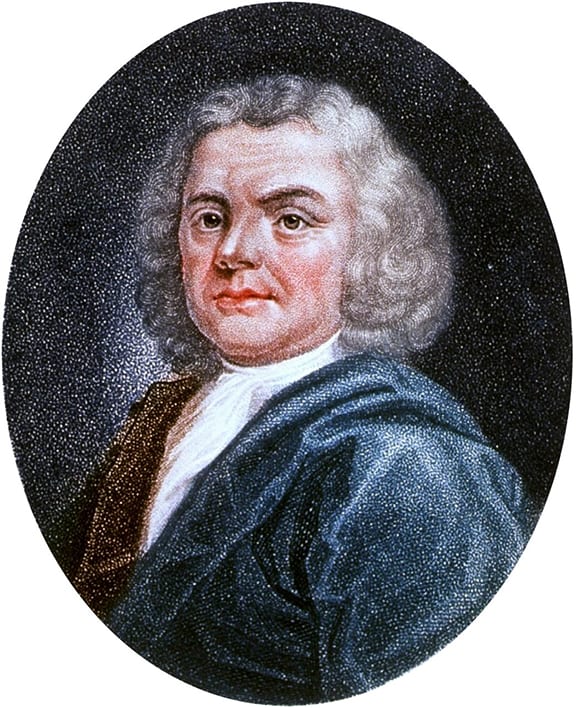 Apparently the concoction was first developed by the celebrated Holland Professor Herman Boerhaave. Boerhaave (1668-1738) was a Dutch physician, botanist, professor and Rector Magnificus (Chancellor) at Leiden University. He is regarded as the founder of clinical teaching and of the modern academic hospital and is sometimes referred to as “the father of physiology.” In the 18th century, Boerhaave was renowned even in China for the way in which he practised and taught medicine. Not only did Herman Boerhaave discover many new things, he was also an inspiring teacher. He was an advocate of ‘teaching at the bed’ and autopsy and took his students on a journey through the world of medicine. Even Tsar Peter the Great attended one of his lectures. 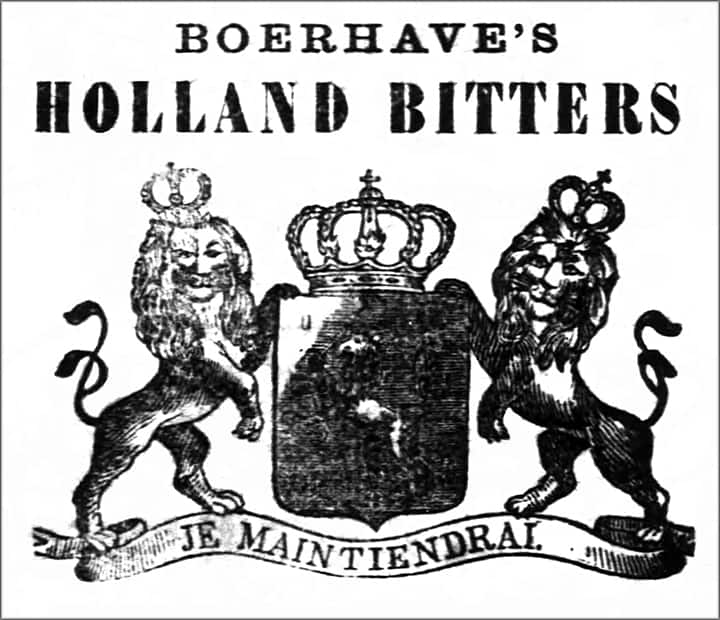 Advertising further states that the product had great success in European States and that the introduction to the United States was intended for those of the fatherland that were “scattered here and there over the face of this mighty country”. The product sold for $1.00 a bottle or six bottles for $5.00. Big time agents like T.W. Dyott & Sons (Philadelphia), Barnes & Park (New York) and Laughlin & Bushfield (Wheeling, Va) were selling the product in those locales.

Benjamin Page Jr. was born in Missouri about 1830 and found himself in Pittsburgh at the young age of 21 practicing as a druggist in 1850. During the last half of the decade he would develop the Boerhaves Holland Bitters. When Mr. Page entered the United States Navy in 1862, he apparently sold his interest in the business, leaving no record of subsequent owners. He died very young in Philadelphia in 1874. However, it seems that this remedy continued to enjoy some appeal even after the turn of the century. Boerhave’s is counted among a laundry list of pharmaceutical products available in 1904.

Benjamin Page’s grandfather I believe, is the Benjamin Page of the well-known Pittsburgh glass house of Bakewell, Page and Bakewell. The firm was organized in August, 1808, by Benjamin Page, Benjamin Bakewell and Arthur Kinder, three shipping merchants of New York City, and was the first glass house within the then limits of Pittsburgh, and, what is infinitely more, the first successful flint glass works in the United States. The firm continued in existence for nearly three-quarters of a century. 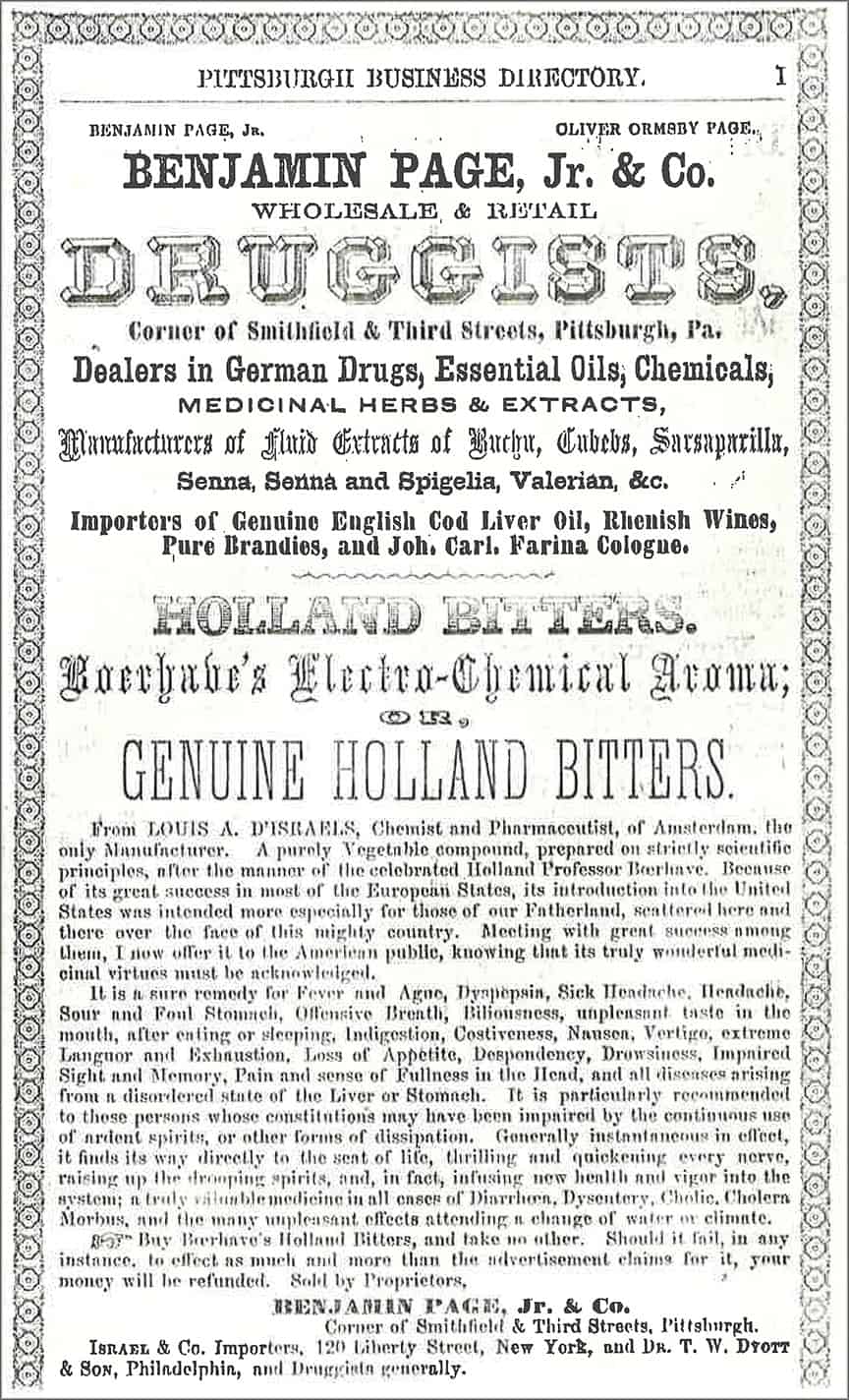 Heres a copy of the 1854 Boerhave’s advertisement. You’ll notice at the top right below Holland Bitters, its advertised as the Electro-Chemical aroma and then Louis A. Disrael from Amsterdam. He changed it the next year to Boerhave’s Holland bitters, so this bottle was made for only one year. Probably one of the reasons its so hard to find. – Chip Cable

According to Pittsburgh collector Chip Cable, there is actually a bottle that precedes the Boerhaves Holland Bitters. As far as he knows, there are only two known examples. It is the same shape and size as the Boerhave’s, but it is open pontiled and embossed on the front: “Boerhave’s Electro Chemical Aroma”. On one side it says “Louis a Disrael/Amsterdam” and on the other side panel is is embossed: “Benj Page Jr. /Pittsburgh.” He apparently owned both of the known examples, but unfortunately sold them years ago and wishes he could have one back! He also notes that there is a pontiled Holland Bitters and as far as he knows, there is only one known example (see advertisement above provide by Chip). 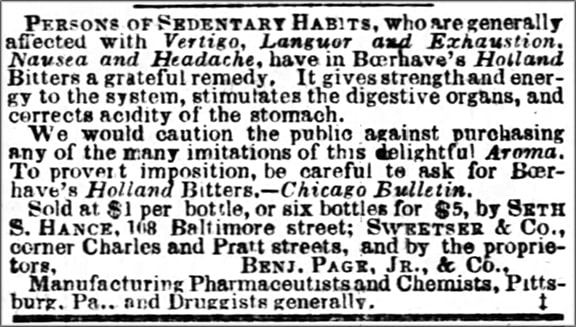 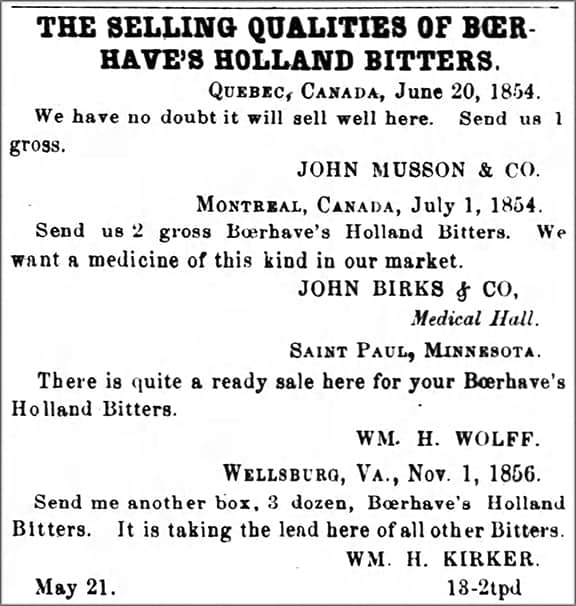 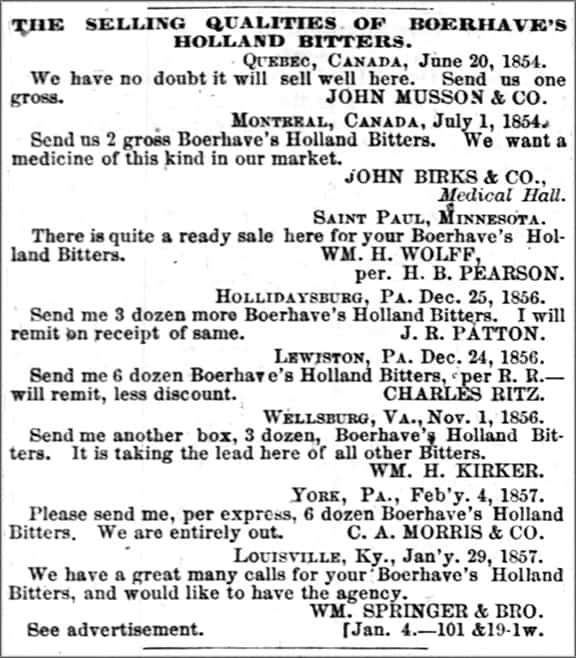 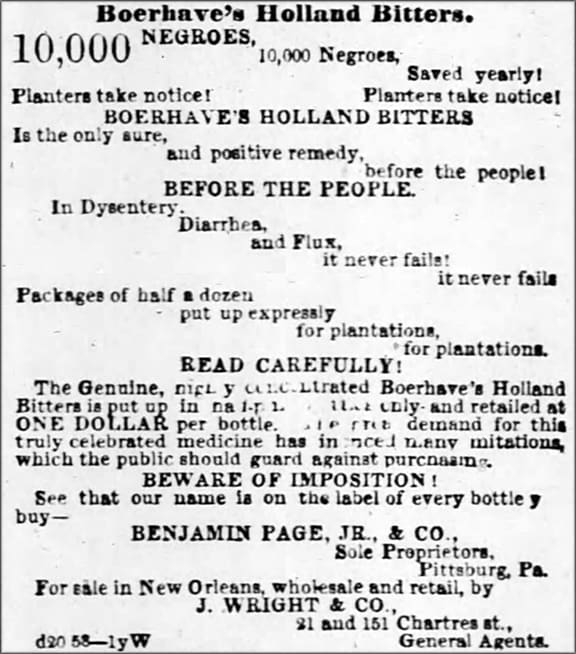 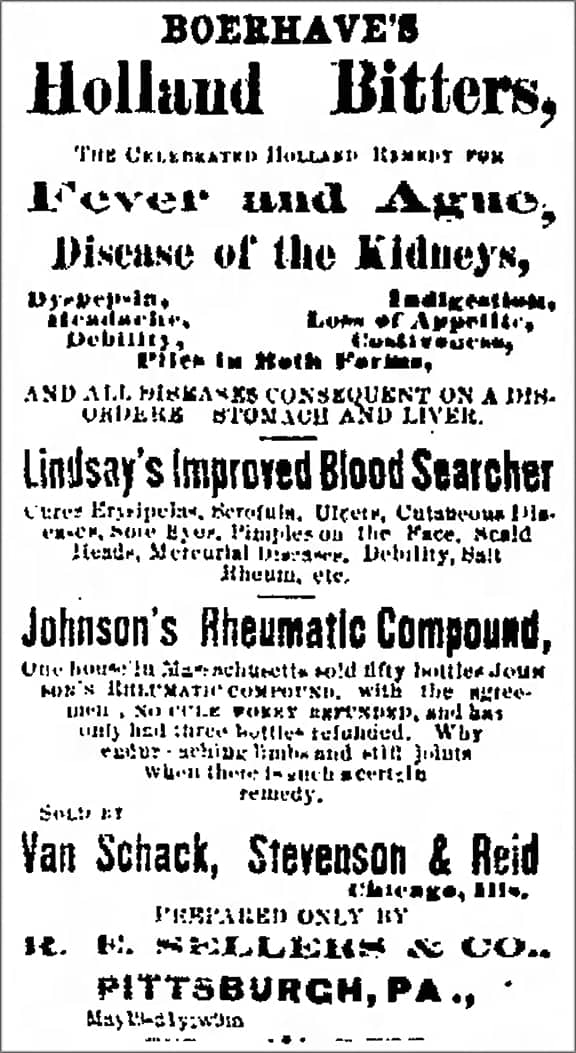 Ferdinand Meyer V is a native of Baltimore, Maryland and has a BFA in Fine Art and Graphic Design from the Kansas City Art Institute and School of Design. Ferdinand is the founding Principal of FMG Design, a nationally recognized design consultation firm. Ferdinand is a passionate collector of American historical glass specializing in bitters bottles, color runs and related classic figural bottles. He is married to Elizabeth Jane Meyer and lives in Houston, Texas with their daughter and three wonderful grandchildren. The Meyers are also very involved in Quarter Horses, antiques and early United States postage stamps. Ferdinand is the past 6-year President of the Federation of Historical Bottle Collectors and is one of the founding members of the FOHBC Virtual Museum.
View all posts by Ferdinand Meyer V →
This entry was posted in Advertising, Bitters, Druggist & Drugstore, History, Remedy and tagged Amsterdam, Benjamin, bitters, Boerhaave, Boerhave, Cable, chemical, chemist, Disrael, Druggist & Drugstore, Electro, Holland, Missouri, Netherland, Page, Pennsylvania, pharmacist, Pittsburgh, Remedy, Wichmann. Bookmark the permalink.