THE PRIDE OF VIRGINIA

Ferdinand: Did you see the Old Home Bitters that showed up at Mansfield a few weeks ago? Do you know if it was the O35 Laughlin’s & Bushfield or the O 36 Laughlin, Smith & Co. variant? I understand that it was olive green and may or may not have had remnants of a metallic pontil. Do you know anyuthing about it?

[PRG] Well I had heard about this bottle in Mansfield from some of the big bitters guys who were there such as Burkhardt, Ferraro and Taylor. I can not answer Bill but I suspect someone can help with his question.

[PRG] I have a perfect example (pictured) of an O 36 which is a light smoky yellow amber w/olive tone. It is a strange color and you can see a slug plate remnant of the earlier Laughlin & Bushfield relationship. 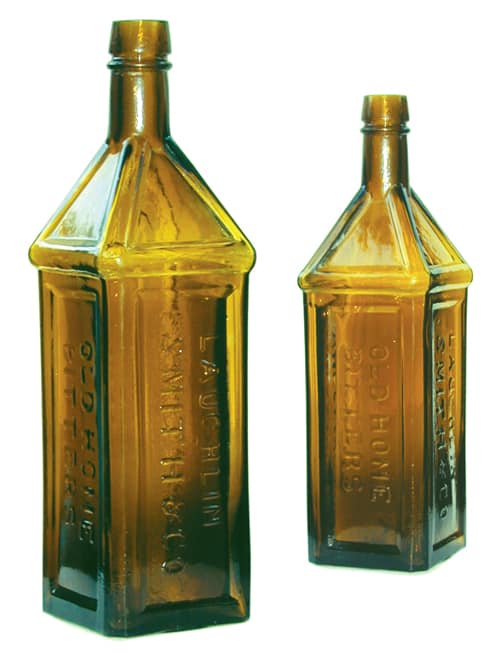 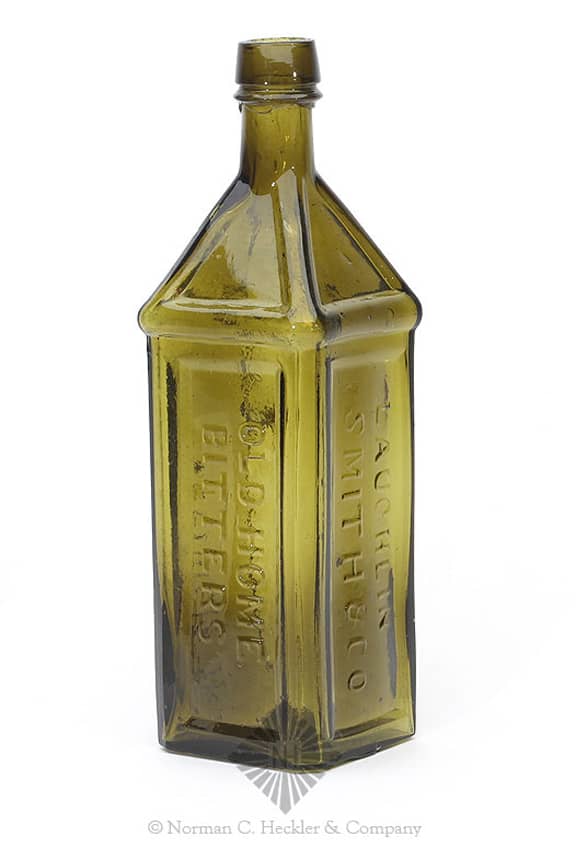 Ferdinand Meyer V is a native of Baltimore, Maryland and has a BFA in Fine Art and Graphic Design from the Kansas City Art Institute and School of Design. Ferdinand is the founding Principal of FMG Design, a nationally recognized design consultation firm. Ferdinand is a passionate collector of American historical glass specializing in bitters bottles, color runs and related classic figural bottles. He is married to Elizabeth Jane Meyer and lives in Houston, Texas with their daughter and three wonderful grandchildren. The Meyers are also very involved in Quarter Horses, antiques and early United States postage stamps. Ferdinand is the past 6-year President of the Federation of Historical Bottle Collectors and is one of the founding members of the FOHBC Virtual Museum.
View all posts by Ferdinand Meyer V →
This entry was posted in Auction News, Bitters, Bottle Shows, Questions and tagged Bill Ham, bitters, Burkhardt, Bushfield, ferdinand meyer, Ferraro, Heckler, Laughlin, Mansfield, Meyer Collection, Old Home Bitters, Smith, Taylor, West Virginia, Wheeling. Bookmark the permalink.