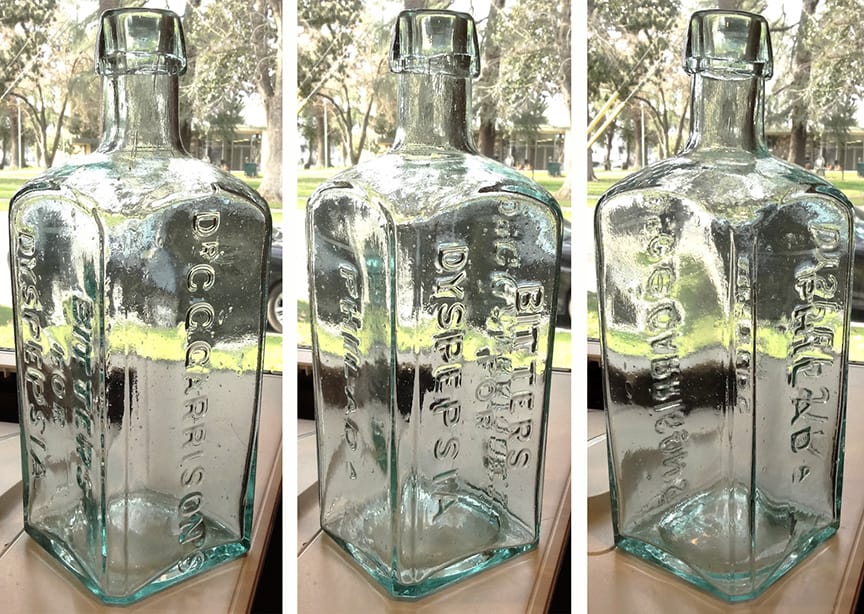 Here is another great aqua bitters that sold last week on Jeff Wichmann’s American Bottle Auctions Sale Page. I have not seen an example of a Dr. C. G. Garrison’s Bitters for Dyspepsia from Philadelphia, so this was pretty darn exciting to this bitters collector. Jeff’s write-up on the bottle is as follows:

8 ¼”.  Applied top, smooth base. (G 6.5) Here is another rare aqua square, we are only aware of one selling at auction. This has the nice fat lettering and some nice crudity. Condition is superior. Another neat bitters we have never seen. Grades a 9.7. 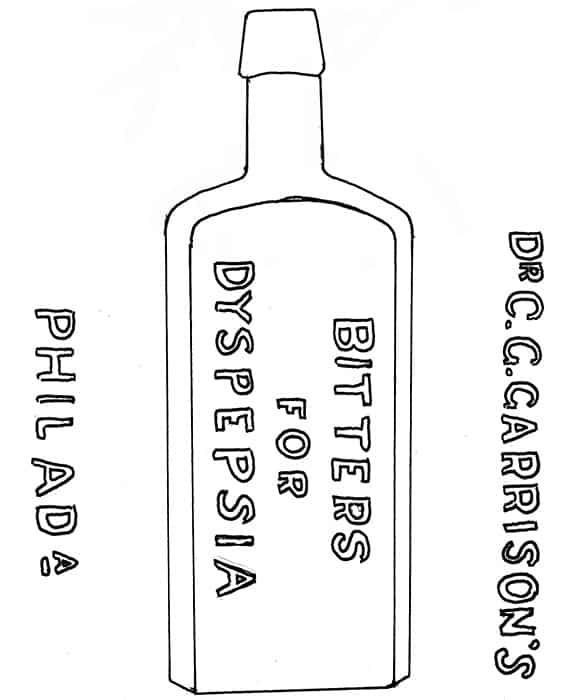 At first I thought we were talking about Charles Grant Garrison who was the son and grandson of physicians in the Camden area of New Jersey. He is pictured below and was born in Swedesboro, New Jersey on August 3, 1849 which would have meant that he made and sold the Dr. C. G. Garrison’s Bitters as a physician in 1866 when he was 16 years old. I don’t think so. 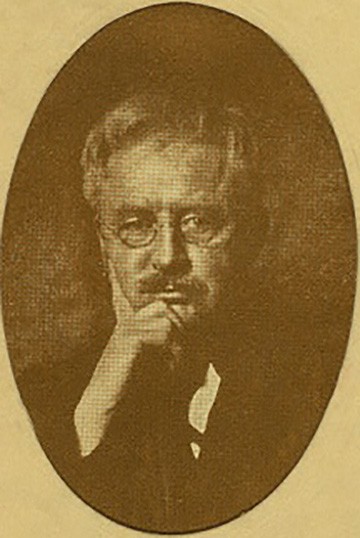 Charles Grant Garrison had a grandfather named Charles G. Garrison. (1800-1875). I found an 1839 listing for a Mr. and Mrs. C. G. Garrison from Merchantville, Camden County, New Jersey which is five miles from Philadelphia, on the Amboy Division of the Pennsylvania Railroad. He was married to Hannah F. Fithian in 1821. He probably made the bitters and it is him listed on advertising around 1866 from his office in Philadelphia at No. 211 South Eighth Street. He probably took the train back and forth  from the Merchantville depot to Philadelphia each work day. 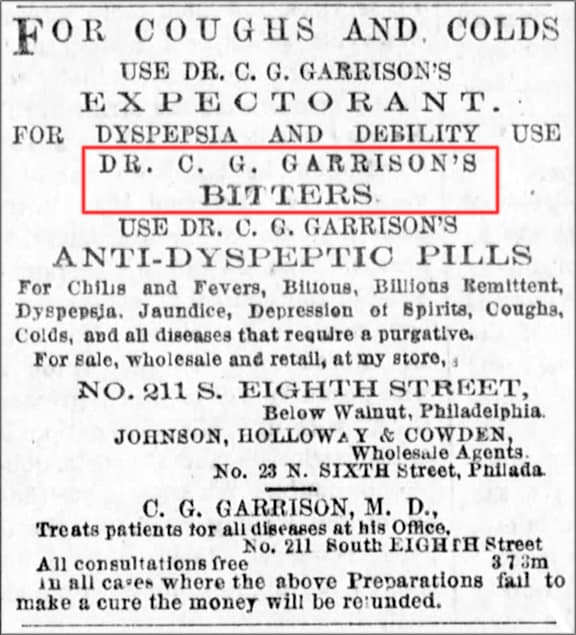 Charles Grant Garrison was born in Swedesboro, New Jersey on August 3, 1849. Swedesboro is southwest of Philadelphia and east of Wilmington, Delaware. The Garrison family came to Camden in 1855, when his father, Joseph Fithian Garrison (1823-1892), of Swedesboro, who was a Reverend and Doctor, was appointed rector of St. Paul’s Episcopal Church, a post he held until August of 1884. Charles Grant Garrison was also the grandson of Dr. Charles Garrison, also of Swedesboro.

Charles Grant was educated at the Edgehill School in Princeton, at the Episcopal Academy, Philadelphia and then went to the University of Pennsylvania where he graduated with a B.A.. from that institution in 1869, and M.D. in 1872. He had three younger brothers, Lindley, William, and Joseph. Lindley Garrison was Secretary of War under President Wilson from 1913 until his resignation in 1916.

He practiced as a physician in Swedesboro for four years while selling patent medicines and maybe sold the Dr. C. G. Garrison’s Bitters though by this time the product was probably not on the market. That is the extremely rare component. Probably only made in 1866 or so.

He next resolved to become a lawyer, and entered the office of Samuel H. Grey of Camden, who at the time of his death was Attorney General of the State. He was admitted to the Bar in 1878, and established a partnership with Thomas French. Thomas French and Charles Garrison became counselors-at-law in 1881, and remained partners until 1888, when Garrison was appointed to the New Jersey State Supreme Court.

In 1884 Charles Garrison became Judge Advocate General of New Jersey. Governor Green in 1888 nominated him to the State Senate as an Associate Justice of the Supreme Court, to succeed Justice Joel Parker who, previously to his service, on the bench, had been New Jersey’s war Governor and who subsequently served a second term in that office. Confirmation from the Senate came promptly. Governors Werts, Murphy, Fort and Fielder re-nominated him for successive seven-year terms, in 1895, 1902, 1909, 1916. Justice Garrison became Chancellor of the Southern Diocese of the Protestant Episcopal Church of New Jersey in 1882 and was still in that position as late as 1917. He retired due to ill-health around 1920.

Judge Garrison resided in Merchantville for many years, and was their at the time of his death on April 22, 1924 which was noted in the New York Times the following day. 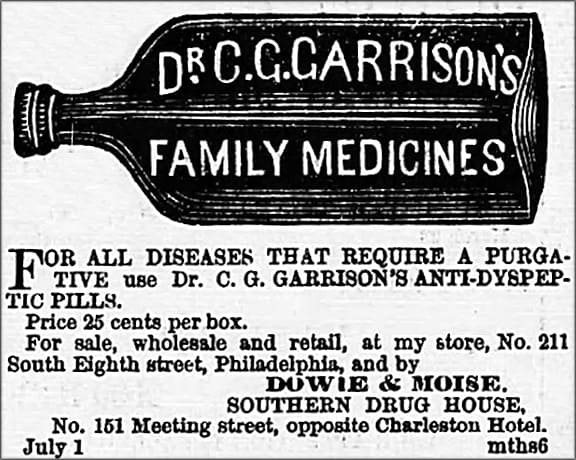 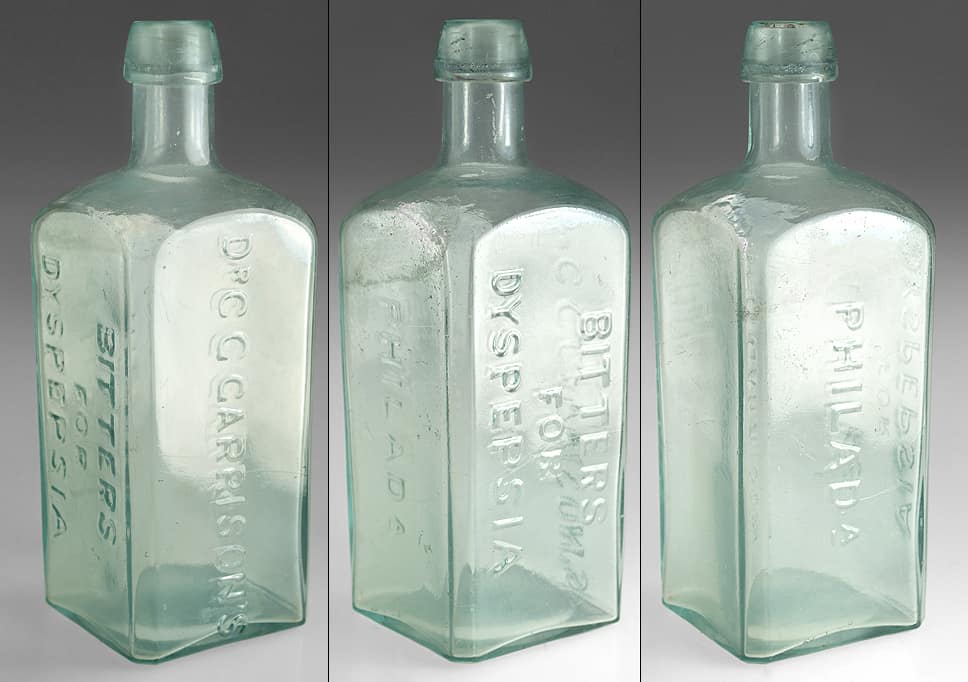 Ferdinand Meyer V is a native of Baltimore, Maryland and has a BFA in Fine Art and Graphic Design from the Kansas City Art Institute and School of Design. Ferdinand is the founding Principal of FMG Design, a nationally recognized design consultation firm. Ferdinand is a passionate collector of American historical glass specializing in bitters bottles, color runs and related classic figural bottles. He is married to Elizabeth Jane Meyer and lives in Houston, Texas with their daughter and three wonderful grandchildren. The Meyers are also very involved in Quarter Horses, antiques and early United States postage stamps. Ferdinand is the past 6-year President of the Federation of Historical Bottle Collectors and is one of the founding members of the FOHBC Virtual Museum.
View all posts by Ferdinand Meyer V →
This entry was posted in Advertising, Bitters, History, Medicines & Cures and tagged bitters, Camden, Charles, Dyspepsia, Fithian, Garrison, Medicine, New Jersey, Patent, Philadelphia, physician, Swedesboro, Wichmann. Bookmark the permalink.