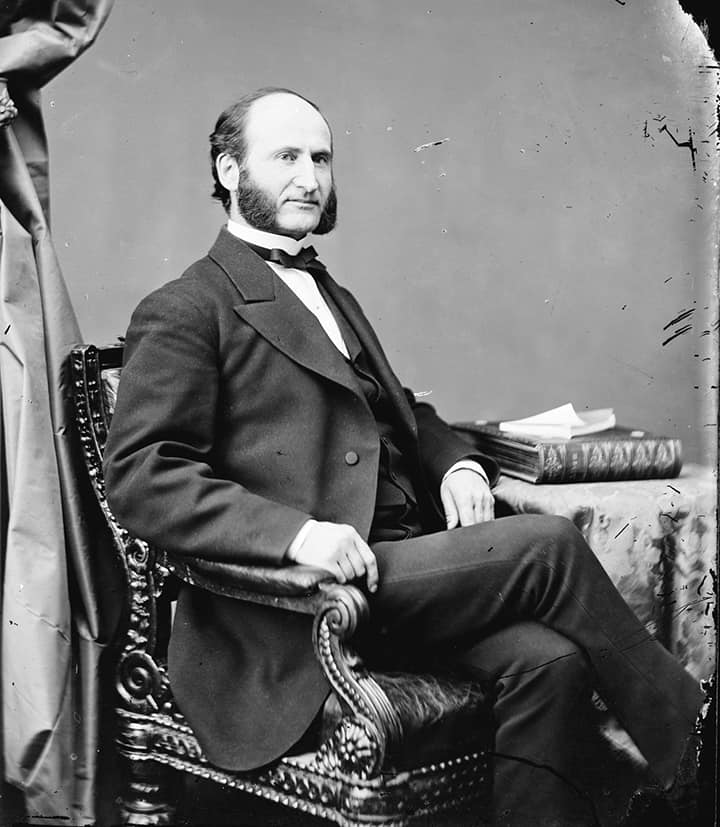 Periodically I come across the Demas Barnes name and have wondered about the man. Most recently with John F. Henry (Read: Johnson’s Calisaya Bitters – Burlington, Vermont) who came to New York in 1865 and went to work for Demas Barnes & Company. There is quite a bit of information online, much of it repetitive. I was able to pull some of this information together in one post. Finding a few obituaries helps as you figure family members are providing the information.

Demas S. Barnes was born on April 4, 1827 in Gorham Township, Ontario County, New York. He was known primarily as the original and successful patent medicine man and later as an American politician and a United States Representative from New York. He was also a trustee of the Brooklyn Bridge, director of the Long Island Railroad, and owner of proprietary medicine patents bought from various developers. Quite a man.

Denver, June 25, 1865
The Indians have interfered with the running of the stages west of this, and it is uncertain when I shall be able to proceed, I have visited the mines in the mountains at Central City and Black Hawk, and returned here to wait my chances…

Barnes attended public schools and commenced work as a farmers boy at 11 years of age. He moved to New York City in 1849 and engaged in the drug and medicine business with branch houses in New Orleans and Montreal. Barnes was also an amateur geologist, and crossed the American continent from 1862 to 1865 in a wagon and during the journey studied the mineral resources of Colorado, Nevada, and California. He came home, by Acapulco, and the isthmus of Panama. 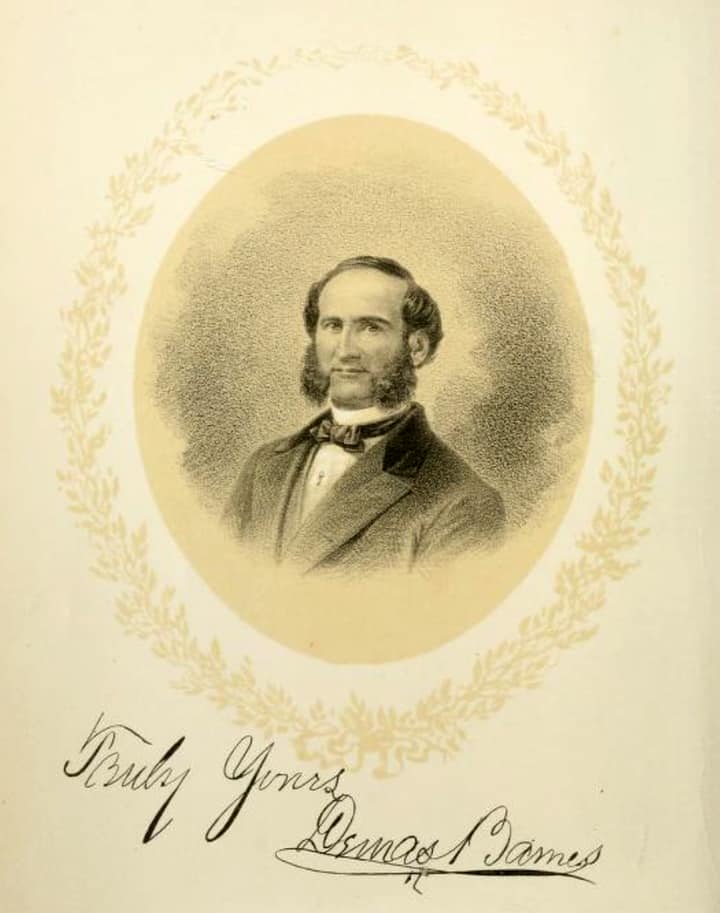 Interior Illustration: From the Atlantic to the Pacific, overland. A series of letters by Demas Barnes, describing a trip from New York to San Francisco, thence home, by Acapulco, and the isthmus of Panama (1866) – Demas Barnes

Upon returning to New York City, Barnes wrote articles and published works concerning his experiences in the United States.

Read: From the Atlantic to the Pacific, overland. A series of letters by Demas Barnes, describing a trip from New York to San Francisco, thence home, by Acapulco, and the isthmus of Panama (1866)

Barnes started his wholesale drug business in New York City in 1853 and was highly prosperous as a patent medicine manufacturer. One of the most important successes achieved by Demas Barnes in 1860 was by forming a partnership with Patrick Henry Drake, and trading as P. H. Drake & Company. Most of us are familiar with the figural cabin, Drake’s Plantation Bitters. He was also representing popular brands such as Guysott’s Yellow Dock & Sarsaparilla, Hagan’s Magnolia Balm, Heimstreet’s Hair Restorative, Lyon’s Kathairon Plasters, Mexican Mustang Liniment and Wynkoop’s Pectoral to name a few. All great bottles we collect.

Demas Barnes was one of the first to request private die stamps after they were authorized, and the first three Barnes stamps were approved by the Commissioner of Internal Revenue in September 1862. These were the 1¢, 2¢, and 4¢ D. S. Barnes stamps in a vertical format printed in black and in vermillion. They are pictured deeper in the post.

After the Civil War, Barnes made a handsome fortune out of proprietary medicines and bitters. By 1868, Demas Barnes was out of the wholesale medicine business. With money and a banking background, Barnes financially backed Joseph B. Rose and Charles Henry Fletcher – who had acquired the rights to Centaur Liniment and to Castoria (then known as Pitcher’s Cathartic) for a reported $25,000 in 1870. Rose and Fletcher improved the products, and eventually Barnes owned twenty-five percent of the profitable Centaur Company, which manufactured the laxative (aka Fletcher’s Castoria). These bottles are plentiful.

Demas Barnes settled in Brooklyn with W. C. Kingsley, Col. William Hester, W. M. Van Anden and others and started The Brooklyn Eagle, but failing to agree with his associates, drew out and in 1873 established The Brooklyn Argus, which not proving a profitable venture, he gave up three years later. Barnes was a member of the board of education, and was one of the original trustees of the Brooklyn Bridge when it was a private enterprise. 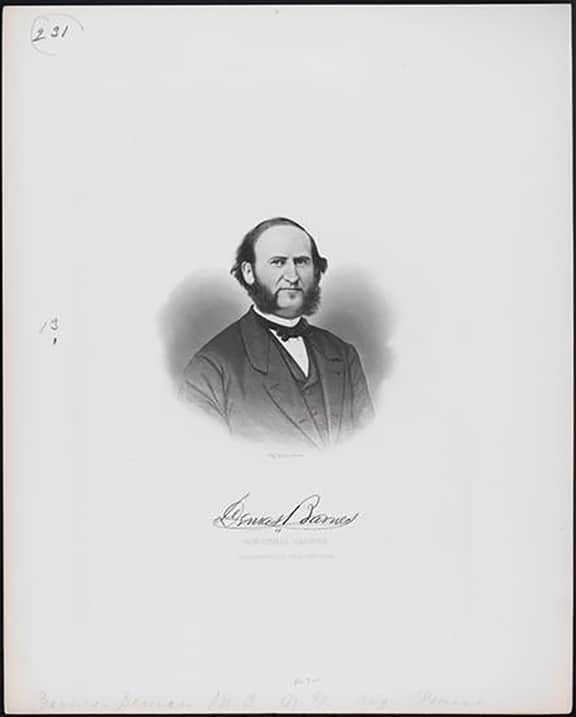 Elected as a Democrat to the Fortieth Congress, Barnes served as a U.S. Representative for the second district of New York from March 4, 1867 to March 3, 1869, though was not a candidate for renomination in 1868. He later was identified with the Independent movement and was a member of the Brooklyn Committee of One Hundred which undertook to fight the regular Democratic organization., this being the only municipal office he ever held.

In the sixties and seventies of Brooklyn, South Brooklyn, as it was known, was one of the most favored sections of town. The cream of its fashion was First Place, between Court and Clinton Streets. There was a series of splendid mansions, some of white marble and others of brownstone. Demas Barnes had the finest mansion.

Barnes was struck by a carriage and died in New York City, New York, on May 1, 1888 (age 61 years, 27 days). His wealth passed to his wife and two daughters, although Cora Barnes was the sole legatee of his stock in the Centaur Company. He is interred in Greenwood Cemetery, Brooklyn, New York. Cora Barnes died in 1911 in a fall from a high-rise in New York (read about below).

As noted above, Demas S. Barnes was owner of proprietary medicine patents bought from various developers. Pictured below are the first private die stamps used by Barnes featuring a facsimile of his signature at the bottom, with both his initials. They were issued in three denominations, all of which were issued in black from March of 1863 until early February, 1865. 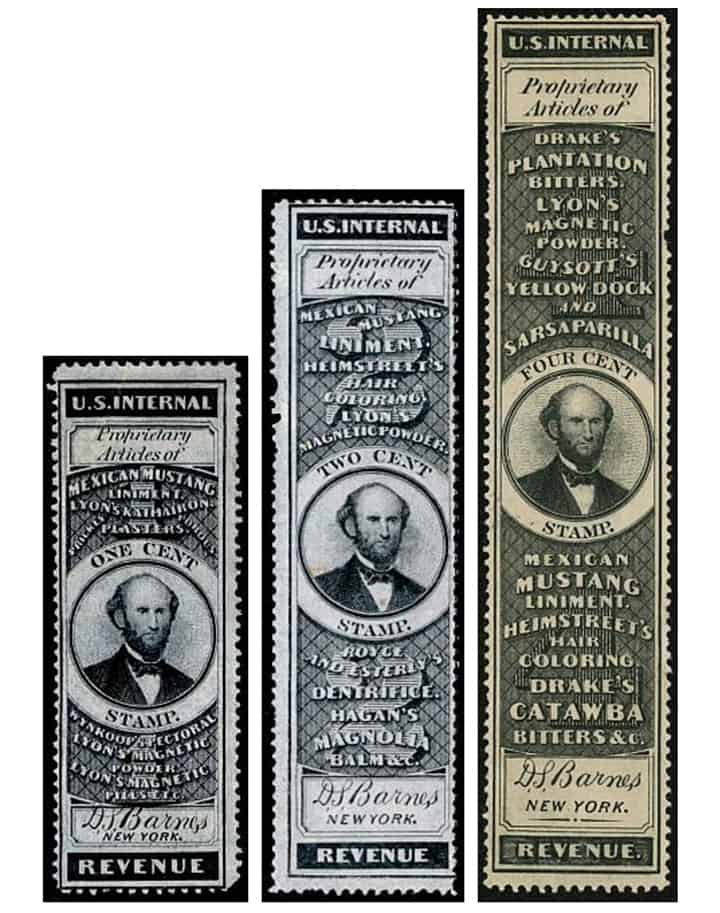 Description: Size of engraving 21 x 64mm. Three-quarters portrait of Mr. Barnes to right upon a circular disk bordered by a triple-lined frame of color outside of which, above and below, are semi-circular, colorless bands inscribed, in colored Roman capitals, “ONE CENT” above, and “STAMP.” below. Above is a vertically lined space, crossed by heavy, diagonal lines of color some distance apart, upon which is a large, outlined and horizontally shaded numeral of value. This is crossed by four lines of inscription in colorless capitals as follows: “MEXICAN MUSTANG LINIMENT”, LYON’S KATHAIRON PLASTERS.”; diagonally in the lower corners “PRICKLY ” at left, and “POROUS ” at right. Below, in a similar manner but in five lines with no diagonal corner inscriptions, ” “WYNKOOP’S PECTORAL”, “LYON’S MAGNETIC POWDER”., LYON’S MAGNETIC PILLS, ETC.” Above and below these are colorless tablets, that above inscribed in two lines of colored, Roman upper and lower case letters, “Proprietary Articles of”; that below “D. S. Barnes” in facsimile signature and “NEW YORK.” in colored, block capitals. Straight) marginal labels of color at top and bottom inscribed “U S. INTERNAL” at top ; “REVENUE” at bottom, in colorless, block capitals. A heavy outer line of color surrounds the whole.

Description: Size of engraving 21 x 86mm. Of the same general design as the one cent value. The colorless band above the circular disk is inscribed “TWO CENT”; the numerals are altered to correspond; the inscription in the shaded space above is in eight lines, as follows: “MEXICAN MUSTANG LINIMENT. – HEIMSTREET”S  HAIR COLORING. – LYON’S MAGNETIC POWDER.”; and that below, which is in six lines, is “ROYCE AND ESTERLY’S DENTRIFICE. – HAGAN’S MAGNOLIA BALM &c.”

Description: Size of engraving 21 x 107 1/2mm. Of the same general design as the one and two cent values. The colorless band is inscribed “FOUR CENT”; the numerals of value are altered to correspond; the inscription above is, in ten lines, “DRAKE’S PLANTATION BITTERS. – LYON’S MAGNETIC POWDER. – GUYSOTT’S YELLOW DOCK AND SARSAPARILLA”; and that below, in nine lines,” MEXICAN MUSTANG LINIMENT. -HEIMSTREET’S HAIR COLORING. – DRAKE’S CATAWBA BITTERS &c.” 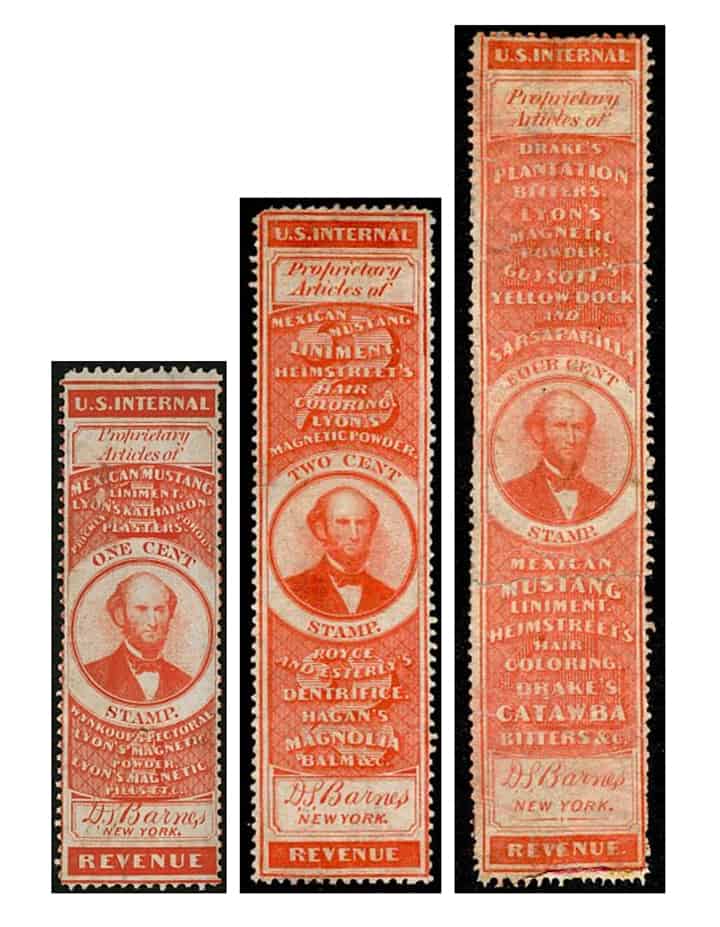 It has been generally believed that the vermilion stamps were the first issued, though, as can be seen by a comparison of the first date of issue, in reality the black came first, then the vermilion, and, after the supply of the latter was exhausted, the black were again issued.

The following correspondence gives a very full history of these stamps and for that reason we reproduce it fully. They are all letters from Butler & Carpenter to Mr. Barnes, the first, dated April 10, 1863, being as follows:

“We are informed that probably you would prefer these plates printed in other colors than black. It is but proper to state to you that black it very readily photographed; and, as your medicines have unusual sale, there may be inducements to photograph your stamp. Still the perforating is always a protection. We think, however, that, as a rule, bright colors seize the passing eye more powerfully: hence gay-colored stamps are, perhaps, preferable in this respect. We will forward you a few impressions in sheets of different colors.”

April 18, 1863 “••• Your directions concerning the color of yr. stamps are duly heeded. Let us ask, however if you want all three in the same color? And do you know it is a very expensive color?

Your order of the 17th inst. delivery could not be filled with stamps of the new Carmine color as it arrived about the same time as your instructions.”

April 23rd, 1868. “Yr. favor of the 21st inst. is duly rec’d. We will print, and are now printing as you desire. We have produced a very handsome color by mixing 2 oz. Carmine with 5 Ibs. Vermilion, which amount of ink will print about six hundred impressions from one of yr. plates. Now for this color we will only charge you about what it costs us, say 50 cents pr. thousand stamps of the 4ct. plate; 371/2ct. per thousand stamps of the 2ct. plate ; and 81 1/2c. per thousand 1 cent stamps. Were we to use a pure Carmine only, costing twenty dollars pr. pound, the cost would be one hundred dollars to print 600 imps. or 23,400 4c. stamps. We have no idea that you intend to pay such a price.

We have a quantity yet (authorized by you to be printed) on hand of yr. stamps in black. Do you intend to throw them on our hands or will you yet use them?”

The above is the first bill for Vermilion.

Fortunately we stopped printing at these numbers. We were under the impression you were perfectly satisfied with the color.”

(This bill was for an order which was completed this day.)

Then comes the following from Butler & Carpenter, dated Sept. 5, 1868.

“We forward you today through the Government Agent, order No. 3789 covering private & public stamps as you request of the Dep’t.

“You will observe that we now forward the Vermilion stamps printed it accordance with your instructions. We have to observe that the balance of the vermillion stamps remaining on hand is 43,324 1ct. & 78,652 2ct. Trusting all may prove satisfactory etc.”

Again, on Oct. 10, 1868:
“Annexed is our a/c. You will observe that we have now exhausted the lot of 1c. stamps printed in Vermilion & will hence continue to give them in black.”

Sources: rdhinstl.com and An Historical Reference List of the Revenue Stamps of the United Stamps by the Boston Philatelic Society 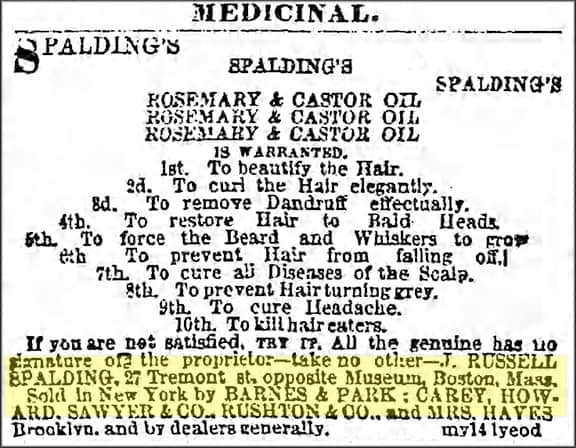 1863-1865: The first private die stamps used by Demas Barnes were issued in three denominations, all of which were issued in black from March of 1863 until early February, 1865. 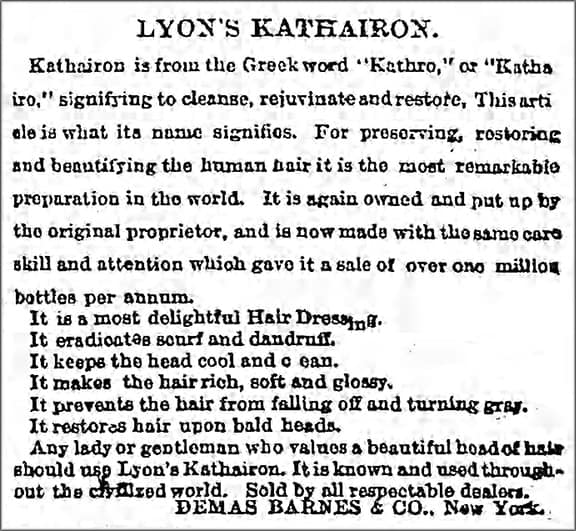 1870: Demas Barnes financially backed Joseph B. Rose and Charles Henry Fletcher, who had acquired the rights to Centaur Liniment and to Castoria (then known as Pitcher’s Cathartic) for a reported $25,000.

1873: Demas Barnes established and edited the Brooklyn Argus in 1873

1879: Mildred Barnes (d 1969) born. ( d 1969). Mildred Barnes was born in 1880 in New York, the daughter of Demas Barnes and Anna Dorinda Blaksley, and heiress to the Castoria patent medicine fortune. As a young woman, Barnes attended Miss Porter’s School then continued her education at private schools in Paris. In 1908, she married Robert Woods Bliss, thus embarking upon the life of a diplomat’s wife. At the time, this consisted of frequent moves from one posting to another around the world. The couple was sent to Latin America in 1909, and in 1912 to Paris, where they remained for the next eight years. 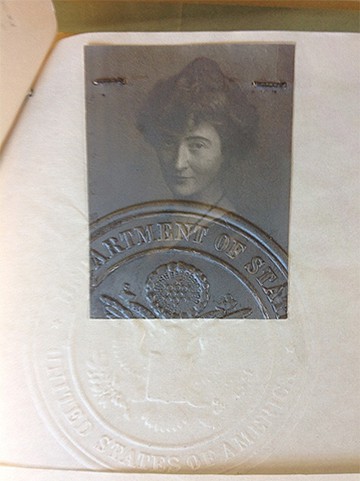 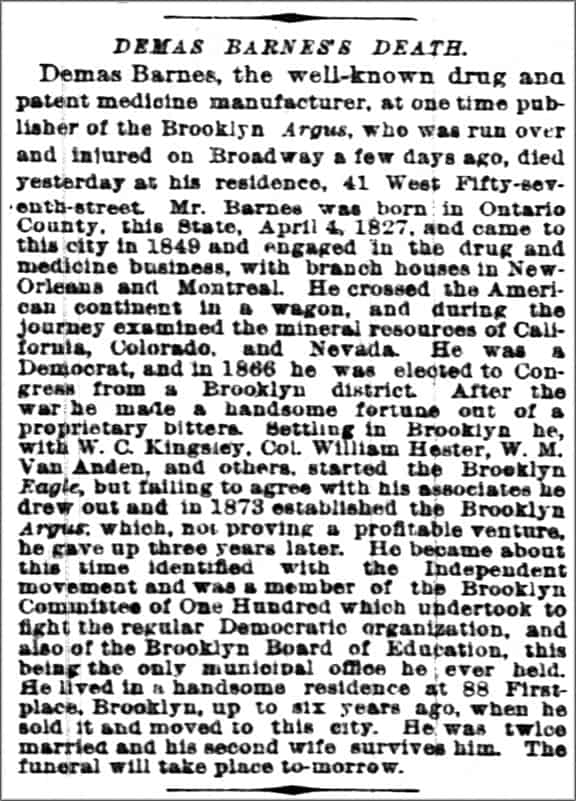