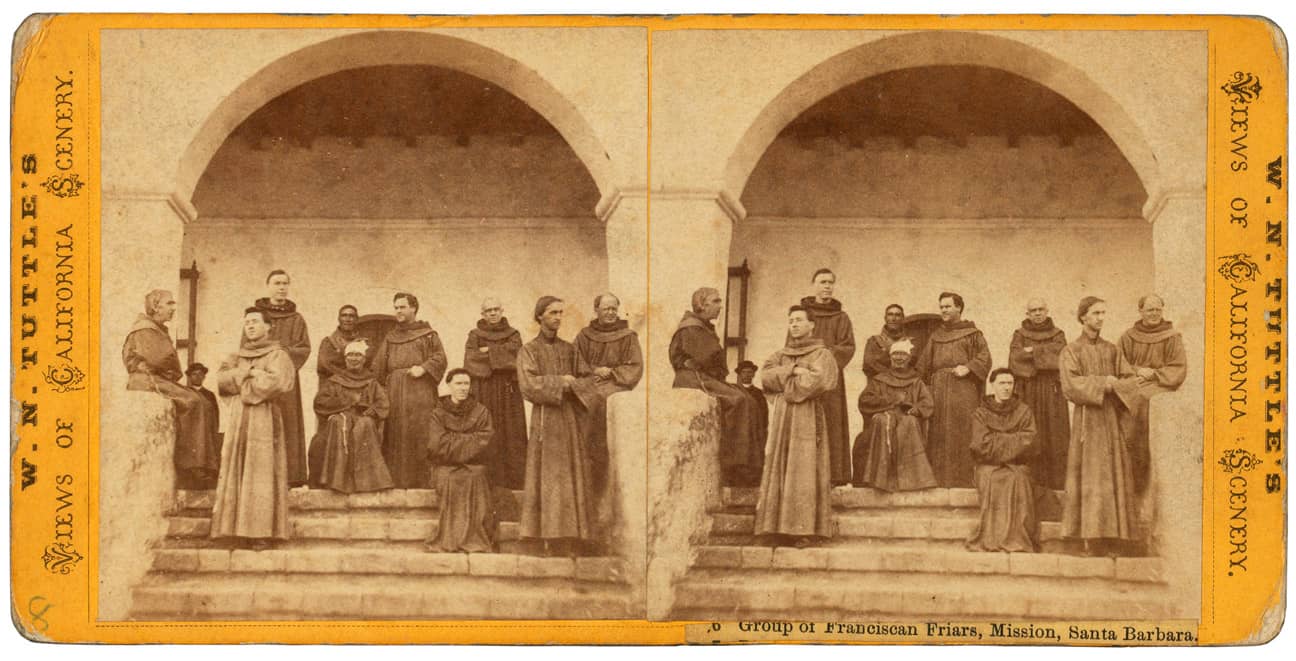 The other day, when I found the New Mexico bitters, (read: Hungarian Blackberry Juice and Wild Cherry Bitters – Tucumcari or Six-Shooter Siding) I came across a Santa Barbara, California bitters too, and it looks to be unlisted! The advertisement (see below) is for “The Genuine Franciscan Cordial Bitters“. It is “A palatable alterative tonic recommended by the most eminent physicians against disorders of the stomach kidneys and bladder.” It was made by the Franciscan Company of Santa Barbara, California. 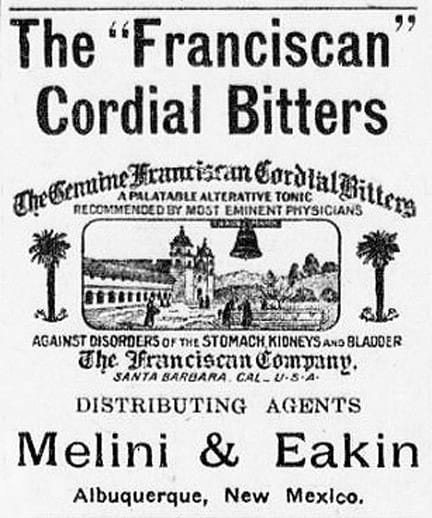 In New Mexico, the bitters was distributed by Melini & Eakin of Albuquerque (see below). James D. Eakin and his wife Mattie were in business with Charles Melini. They had been in an earlier liquor distribution businesses, Eakin & Brady, that went bankrupt. Their partner the first time was John Bandy. (Read: Strong v. Eakin) 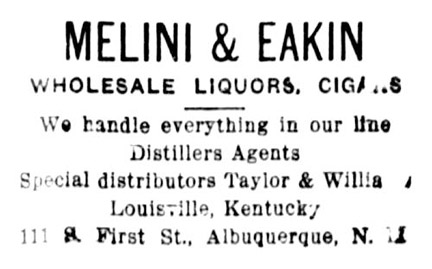 A recent eBay auction had a post card from the firm (see above).

Looking at various online sources, I found the following additional advertisements for Franciscan Cordial Bitters. The December 22, 1905 San Francisco Call had a listing for the bitters (see below). They wrote it was “a palatable, health-giving, scientific combination, from herbs gathered from California and other lands”.

The San Francisco Call of January 7, 1906 (see below) heralds it as “a wonderful tonic from wonderful California” and “The greatest boon to mankind that ever came from California”. Sounds like it must have been pretty good stuff! 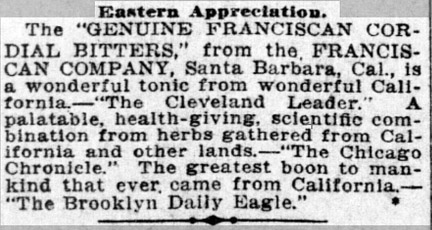 In the February 26, 1906 San Francisco Call, there was an advertisement (see below) for Bibo, Newman Co., sellers of groceries and liquors that lists the bitters. 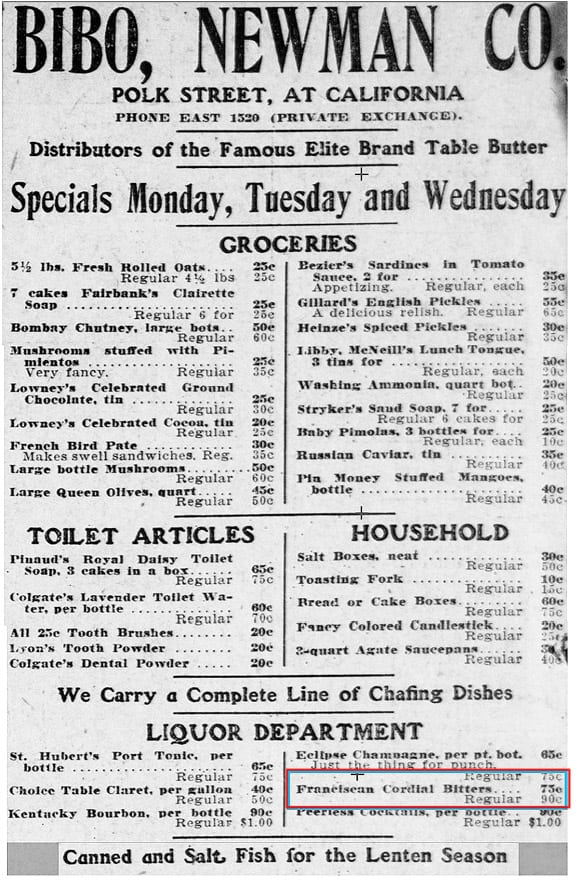 The March 17, 1906 issue of the Lodi California Sentinel (see below) also had an advertisement for the Genuine Franciscan Cordial Bitters. Not only does it mention it being made from “rare herbs grown in California and foreign lands” but that the secret recipe was “zealously guarded by Padre Gonzales” of the Franciscan Monks. The manufacturer is now shown as The Lodi Wine Company, with a W. T. Harris as the manager. 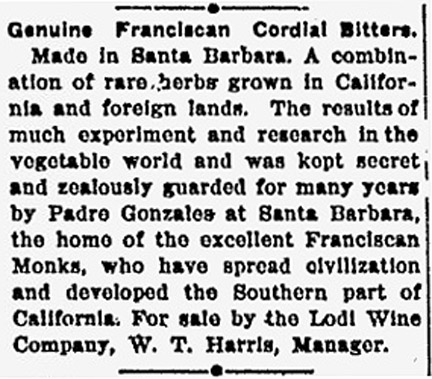 I searched for information about a “Padre Gonzales” connected with the Franciscans of Santa Barbara. There was a Padre Gonzales Rubio who was high up in the church in the 1850s. He was connected with the creation of a Franciscan College in Santa Barbara. It is too hard to tell at this point if he was the keeper of the recipe. There are documents that refer to the church having vineyards. What better way to use some extras grapes than to make a wine based bitters.

The inventoried valuation was $20,843, and it comprised over 3,000 head of stock, the San Jose vineyard north of Goleta (what is now known as the “Sisters Ranch”), the San Marcos Ranch in the Santa Ynez Valley, and all the store houses, their contents, the shops, vineyards, orchards, and the tannery in the vicinity of the Mission. Read: Santa Barbara And Montecito Past And Present – PART II – History of The Santa Barbara Mission – Spanish Supremacy – Mexican Occupation – American Acquisition – Early Days in Santa Barbara.

I could not find anything about W. T. Harris or the Lodi Wine Company. However, the Lodi area was booming with wine production at the turn of the century – “in 1901 the local newspaper declared that wine production was ‘the coming industry for this part of the state.’ ” Read: The Wines of Lodi, California – History 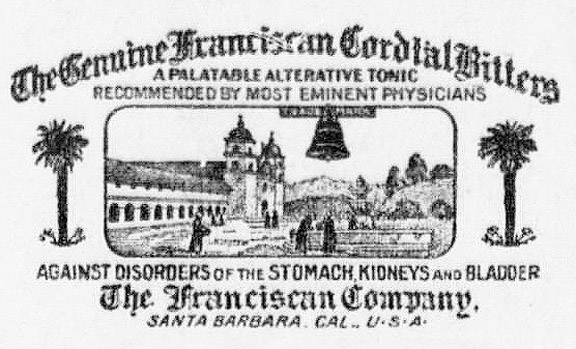 On June 12, 1906, patent 53,850 was registered by the Franciscan Company of Santa Barbara, California (see below). It describes the image that had appeared in their advertising as “a representation of Santa Barbara Mission, with a bell above suspended from a beam, and a palm-tree at each end of the picture.” The design (see above) was originally applied for January 19, 1906 (see image top of post).

June 12, 1906, patent 53,850 was registered by the Franciscan Company of Santa Barbara, California

The last listing I found was in the 1909 Pacific Wine and Spirit Review. In it, William Wolff & Co. show a number of products they are distributors for, including The Genuine Franciscan Cordial Bitters. 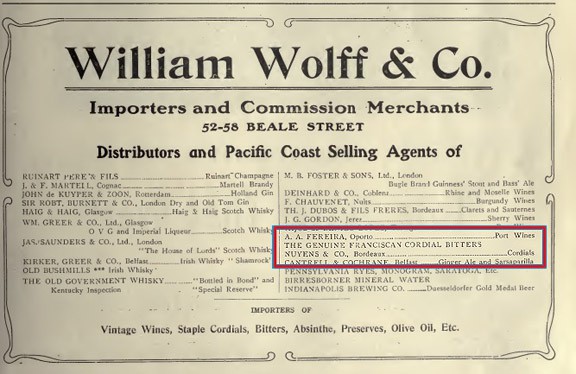 The Pacific Wine and Spirit Review is a good source of advertisements for bitters, beers, wines and whiskeys of the early 1900s. There were statistics from several importers on how many cases of bitters were shipped to different places. The Pure Food and Drug Act of 1906 clearly had not dented sales too much yet. Some of the bitters I saw listed were:

And of course….Orange Bitters sold by Simon Levy & Co. on page 8 (see below). Could this be O 70 or O 75? Both of those are shown to be from San Francisco, as was Simon Levy & C.. or could it be connected with O 67, O 69 or O72? Those were all listed at being from London. Perhaps Hills and Underwood of London had yet another unlisted Orange Bitters?

Note: Peachridge Glass is writing a series on Orange bitters.