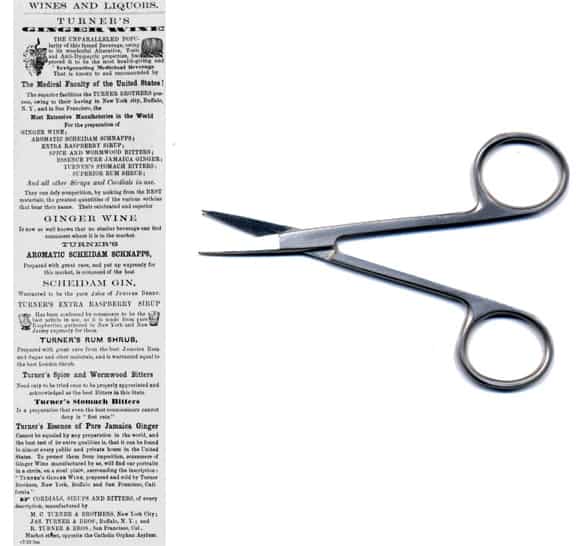 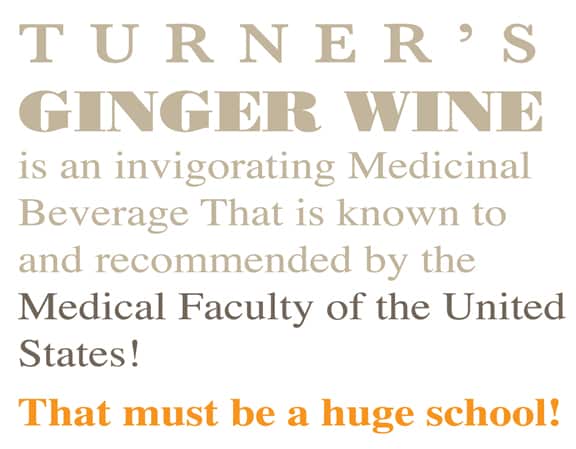 It is interesting to see liquor merchants pushing their products for medicinal purposes including wines such as Bininger’s Knickerbocker Wine Bitters. Sharing  page space within the Daily Sacramento Union on 29 December 1871, with an equally tall Sterne’s Celebrated Congress Bourbon Bitters advertisinent, was this outstanding Turner Brothers advertisement (see below). I just love the Turners brand and have written about them before: 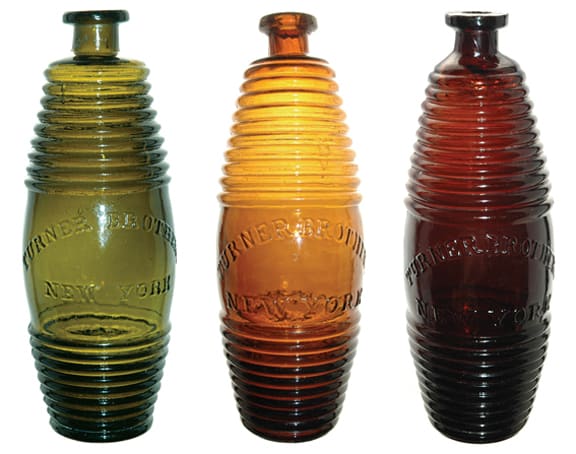 I thought it would be fun to dissect and isolate the various claims and information. 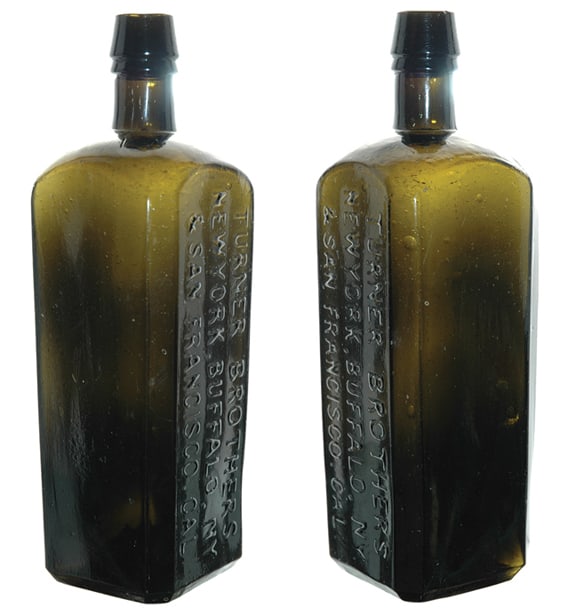 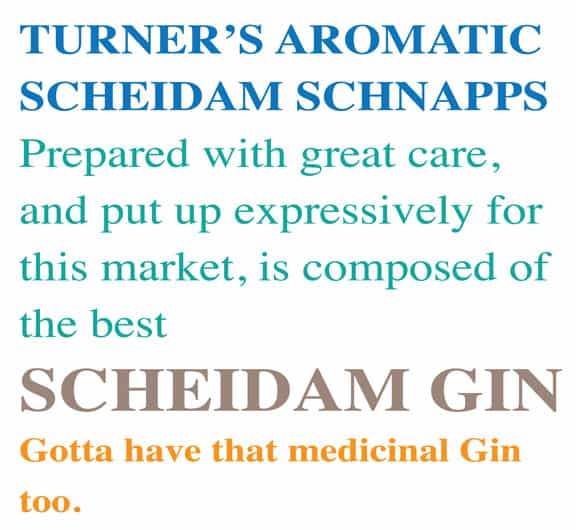 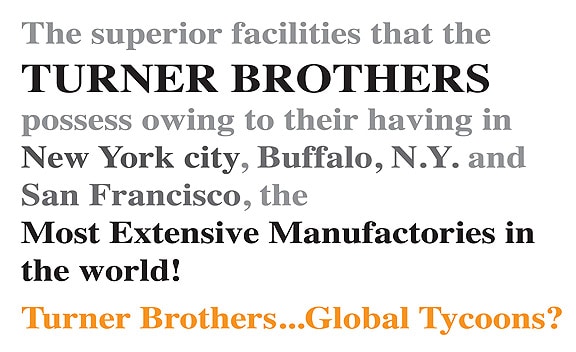 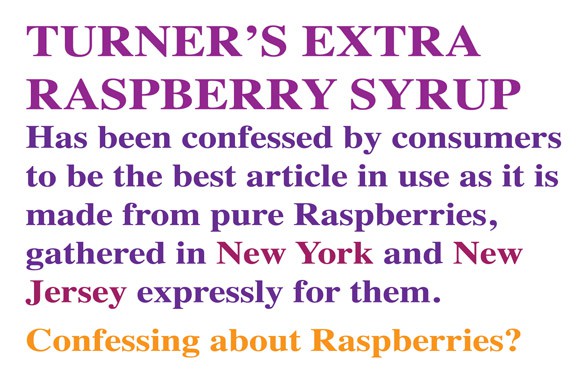 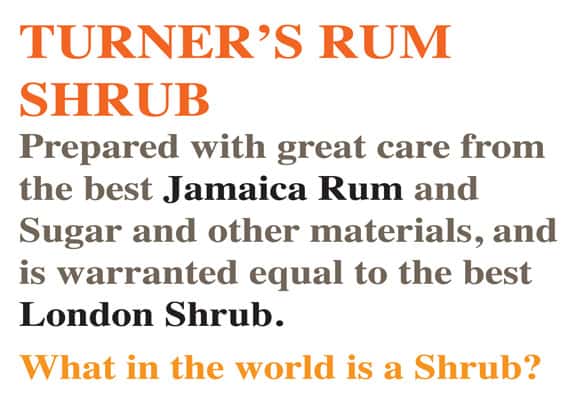 Shrub: In terms of mixed drinks, shrub is the name of two different, but related, acidulated beverages. One type of shrub is a fruit liqueur that was popular in 17th and 18th century England, typically made with rum or brandy mixed with sugar and the juice or rinds of citrus fruit. A second type of shrub is a cocktail or soft drink that was popular during America’s colonial era, made by mixing drinking vinegar syrup with spirits, water, or carbonated water. The name also is applied to the sweetened vinegar-based syrup, also known as drinking vinegar, from which the latter drink is made. Drinking vinegar is infused with fruit juice (and at times herbs and spices) for use in mixed drinks. [Wikipedia] 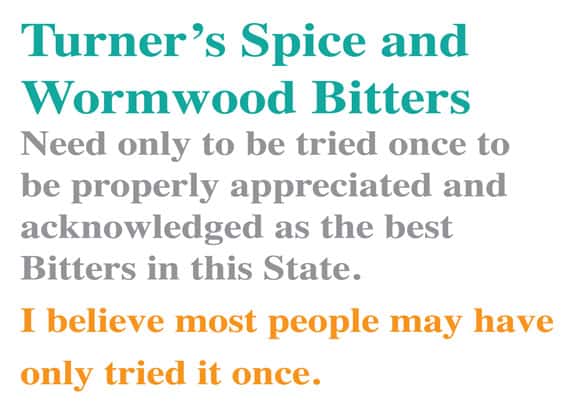 Read: What are all these Wormwood Bitters? 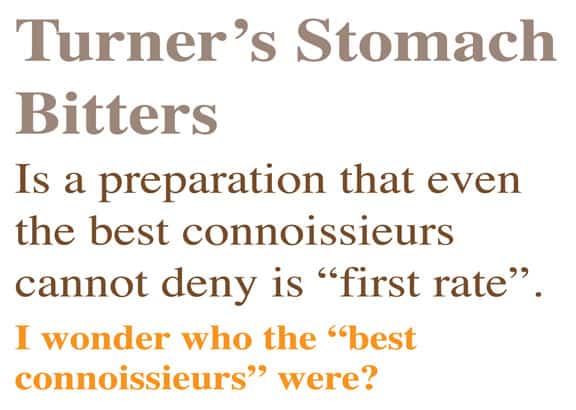 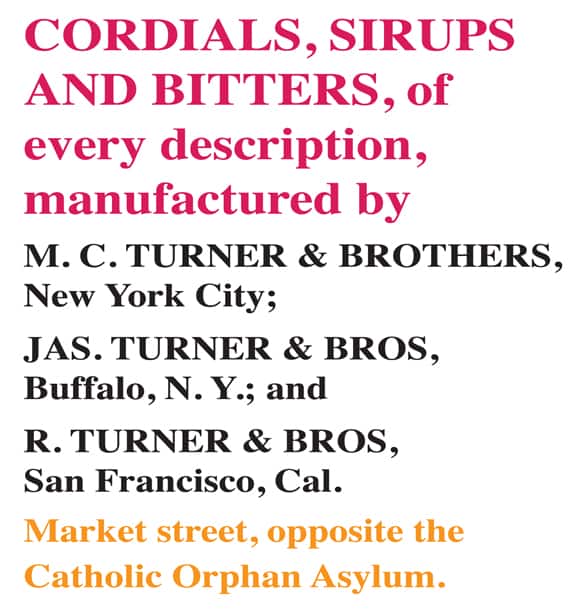 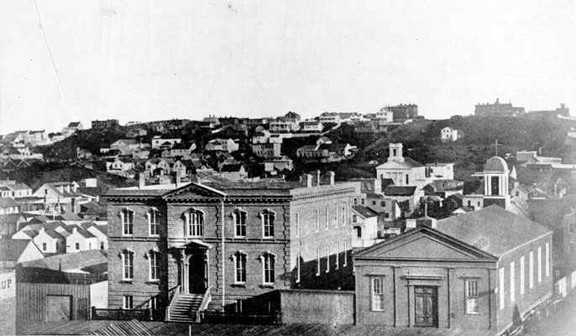 The Making of Market Street

In the early sixties the only improvements on the street were east of Kearny street. To the west an effort was being made to get rid of the sand incubus with the aid of the so-called “paddies,” which were first operating under the direction of S. D. Gilmore, and later by David Hewes, who was christened “Paddy.” A channel was cleared through the sand and steam dummy and a few rattle-trap cars that seemed ready to fall apart at the least provocation as they jolted over the loosely laid rails, ran to Hayes Valley and the Mission. On the fringe of Happy Valley, where the Palace stands, were the Roman Catholic Orphan Asylum, the Sacred Heart School and some other scattered buildings. From Second street down to the water’s edge, which then was at about Steuart street, were a lot of lumber yards and mills and factories representing a variety of local industries, and numerous ramshackle structures labeled “Mechanics’ Exchanges,” where the toilers of the vicinity exchanged lucre for liquor. At the foot of Market street a clumsy ferry-boat owned by a man named Charles Minturn made periodical trips to the Oakland shore. It was half a dollar a trip. It wasn’t much of a prospect, was it? [San Francisco History – The Making of Market Street]

Ferdinand Meyer V is a native of Baltimore, Maryland and has a BFA in Fine Art and Graphic Design from the Kansas City Art Institute and School of Design. Ferdinand is the founding Principal of FMG Design, a nationally recognized design consultation firm. Ferdinand is a passionate collector of American historical glass specializing in bitters bottles, color runs and related classic figural bottles. He is married to Elizabeth Jane Meyer and lives in Houston, Texas with their daughter and three wonderful grandchildren. The Meyers are also very involved in Quarter Horses, antiques and early United States postage stamps. Ferdinand is the past 6-year President of the Federation of Historical Bottle Collectors and is one of the founding members of the FOHBC Virtual Museum.
View all posts by Ferdinand Meyer V →
This entry was posted in Advertising, Bitters, Cordial, Currency, Figural Bottles, Gin, History, Liquor Merchant, Medicines & Cures, Rum, Schnapps, Syrup, Wine & Champagne and tagged Asylum, Brothers, Buffalo, Catholic, Cordial, New York, Orphan, San Francisco, Syrup, Turner. Bookmark the permalink.