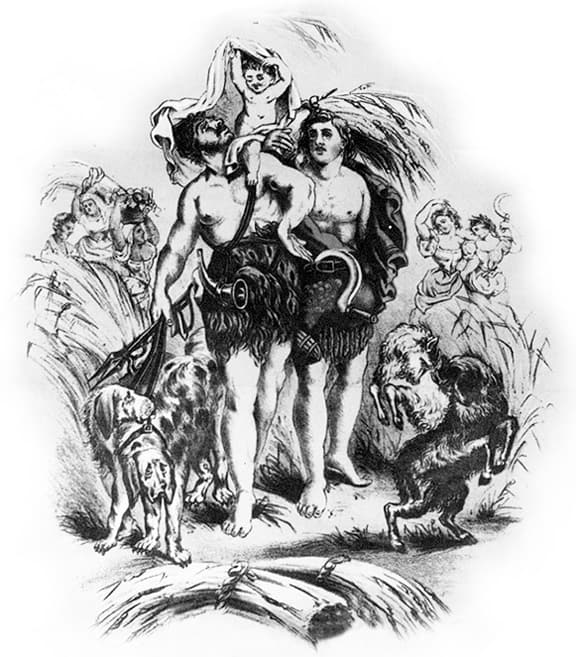 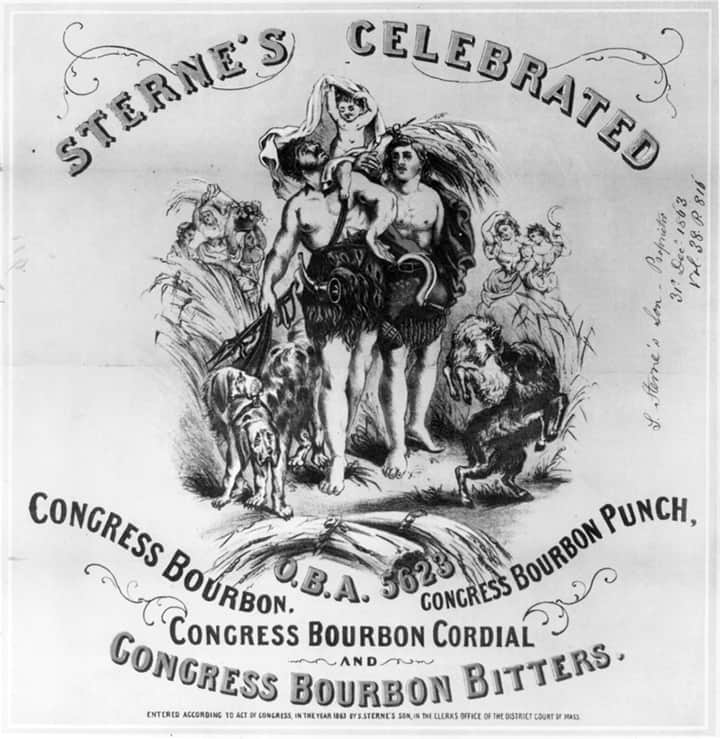 [Update: The Library of Congress has now displayed a color example of slightly different art. See below) 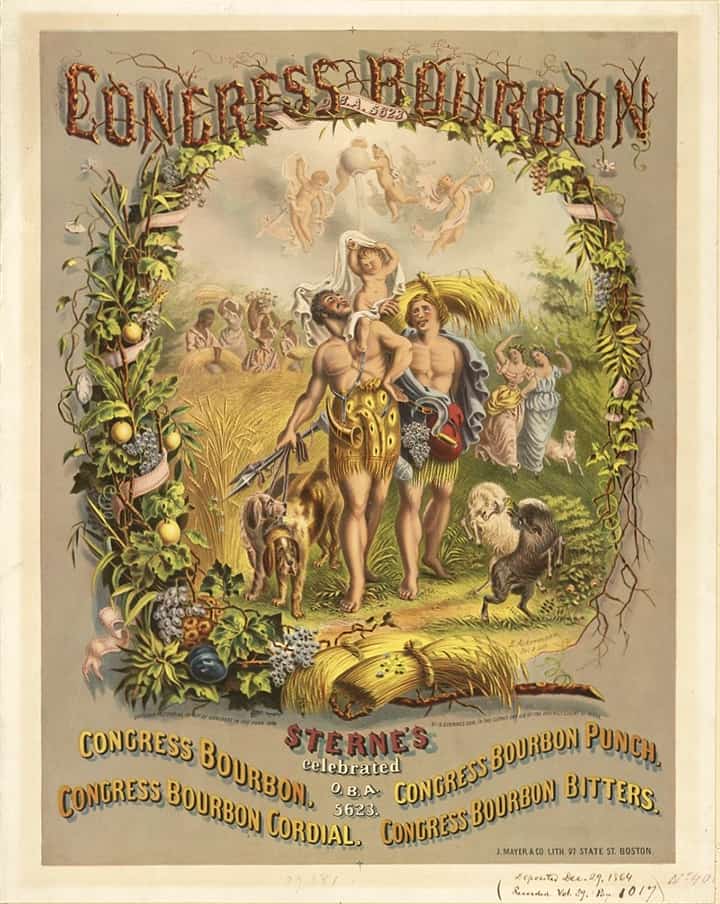 Print shows two partially clad men at center, one, on the left, carrying two spears and with two dogs on a leash, a horn hangs by his side and a cherub sits on his left shoulder; the other man, on the right, carries a sheaf of wheat over his shoulder and has a sickle tucked into his belt, from which also hangs a large bunch of grapes; two goats cavort on the lower right and two women prance behind them, one carrying a sickle; in the background, African slaves harvest wheat with cherubs hovering above the wheat field. The scene is framed with entwined vines covered with foliage and fruit, and sheaves of wheat at bottom center. J. Mayer & Co. Lith. 97 State St., Boston, [1864]

There is a listing in the Carlyn Ring and W.C. Ham Bitters Bottles for a Congress Bourbon Bitters (C 219) from the Providence Journal, January 1, 1864. Why providence? I also found an advertisement within the Sacramento Daily Union in 1871 for S. T. Suit’s Congress Bourbon (see further below).

Pre-Pro.com lists a Sterne Bros. who may have been a distributor for Maryland Pride, a Record & Goldsboro brand. The company used the brand names: “Maryland Pride”, and “Sterne’s Extra.” Address: 171 Summer, Boston, Massachusetts. I suspect this may be the brand listed in Ring & Ham leaving the Sterne’s brand as possibly an unlisted bitters from Kentucky. There is scarce information available.

I wish this advertisement said Sterne somewhere but it doesn’t. It does say Celebrated Congress Bourbon from Kentucky though. Maybe J.T. Suit bought out Sterne? – Sacramento Daily Union, 29 December 1871

Evan Williams rolled the first bourbon barrel out of his Louisville distillery in 1783, thereby assuring himself a place in history as Kentucky’s first commercial distiller. Bourbon is a type of American whiskey that is a distilled spirit made primarily from corn. The name of the spirit derives from its historical association with an area known as Old Bourbon, around what is now Bourbon County, Kentucky (which, in turn, got its name from the French House of Bourbon royal family). It has been produced since the 18th century. While it may be made anywhere in the United States, it is strongly associated with Kentucky.

On May 4, 1964, the United States Congress recognized Bourbon Whiskey as a “distinctive product of the United States.” The Federal Standards of Identity for Distilled Spirits (27 C.F.R. 5.22) state that bourbon must meet these requirements:

• Bourbon must be made of a grain mixture that is at least 51% corn (maize).

• Neither coloring nor flavoring may be added.

• Bourbon must be aged in new, charred oak barrels

• Bourbon, like other whiskeys, must be bottled at not less than 80 proof (40% alcohol by volume.)

• A Bourbon that meets the above requirements and has been aged for a minimum of two years may (but is not required to) be called Straight Bourbon.

• Straight Bourbon aged for a period less than four years must be labeled with the duration of its aging.

• If an age is stated on the label, it must be the age of the youngest whiskey in the bottle.

Only whiskey produced in the United States can be called bourbon.

1863: Sterne’s Congress Bourbon Bitters. Lithograph of an early agriculture and hunting scene. The image is black & white (see above). – Library of Congress

1864: Sterne’s Congress Bourbon Bitters. Lithograph of an early agriculture and hunting scene. The image is color (see above). – Library of Congress

Ferdinand Meyer V is a native of Baltimore, Maryland and has a BFA in Fine Art and Graphic Design from the Kansas City Art Institute and School of Design. Ferdinand is the founding Principal of FMG Design, a nationally recognized design consultation firm. Ferdinand is a passionate collector of American historical glass specializing in bitters bottles, color runs and related classic figural bottles. He is married to Elizabeth Jane Meyer and lives in Houston, Texas with their daughter and three wonderful grandchildren. The Meyers are also very involved in Quarter Horses, antiques and early United States postage stamps. Ferdinand is the past 6-year President of the Federation of Historical Bottle Collectors and is one of the founding members of the FOHBC Virtual Museum.
View all posts by Ferdinand Meyer V →
This entry was posted in Bitters, Bourbon, Cordial, History, Liquor Merchant, Questions, Spirits and tagged bitters, Bourbon, Celebrated, Congress, Evan Williams, Kentucky, Louisville, Sterne. Bookmark the permalink.