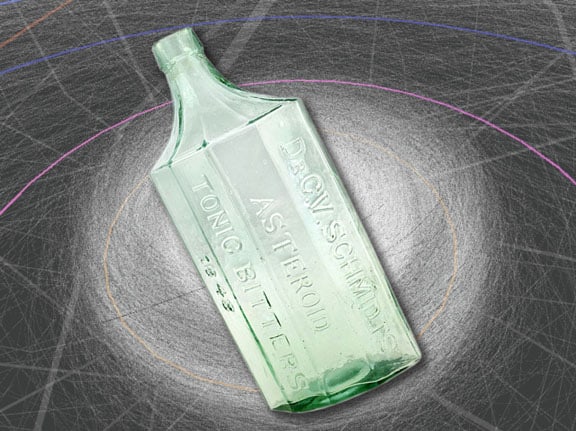 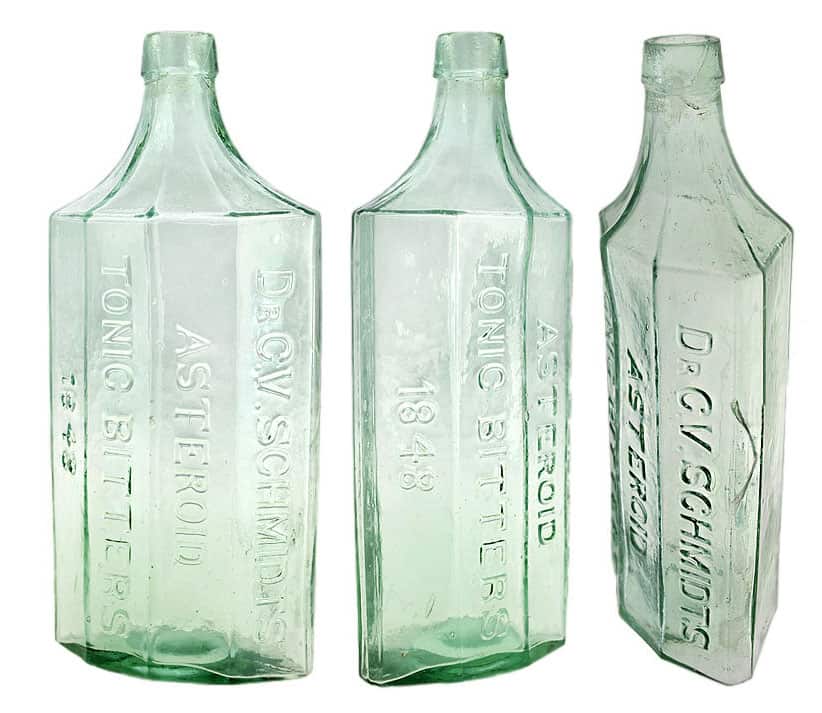 Jim Hagenbuch over at Glass Works Auctions had this extraordinary, Dr. C. V. Schmidt’s Asteroid Tonic Bitters that I just missed getting in their last auction. Fortunately my bottle friend Jeff Burkhardt (Cedarburg, Wisconsin) was able to add it to his collection. We both admired this bottle when we participated in the great John Feldmann sale and opted to wait until the bottle came up for auction. The Glass Works lot write-up:

Acid rain from the heat shock of a large comet or asteroid’s impact with Earth is believed by some to fit the Biblical description of the bitterness produced by the Wormwood Star upon a third of the Earth’s potable water.

This brand is a real tough one as I tried looking up information before. No success. What I do know is that we are talking about a Dr. Charles V. Schmidt located at the corner of 7th and Main in some city in United States. He first concocted his bitters in 1848. When you Google Asteroid Bitters you pull up “Wormwood – Star” on Wikipedia which is interesting. We know that Wormwood is a name used for a number of bitters products. (Read: What are all these Wormwood Bitters?). One of the definitions:

In Greek, is a star, or angel, that appears in the Biblical New Testament Book of Revelation, also called the Apocalypse. 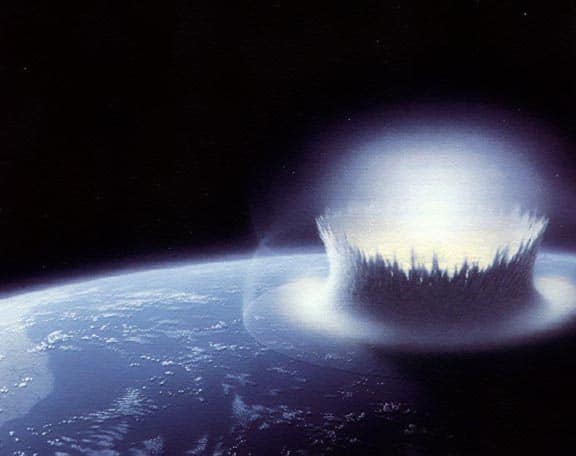 Various scientific scenarios have been theorized on the effects of an asteroid or comet’s collision with Earth. An applicable scenario theorizes a chemical change in the atmosphere due to “heat shock” during entry and/or impact of a large asteroid or comet, reacting oxygen and nitrogen in the atmosphere to produce nitric-acid rain. Acid rain from the heat shock of a large comet or asteroid’s impact with Earth is believed by some to fit the Biblical description of the bitterness produced by the Wormwood Star upon a third of the Earth’s potable water.

Gerardus D. Bouw, Ph. D. in his white paper “Wormwood” theorizes that since the term wormwood refers to a bitter or poisonous plant, specifically “apsinthos, that is, absinthe wormwood” in Revelations 8:11 and that a star falling would likely be an asteroid or comet … the most reasonable scenario being a comet, since they could have a chemical makeup that would make the waters bitter and poisonous and would have to break up by some means, “in order to fall on deep sources of water and rivers, the object cannot be in one piece when it arrives in the atmosphere.”

Did Dr. Schmidt contemplate the Apocalypse when naming his bitters, who knows?

Jeff Burkhardt sent in these gorgeous pictures of his new bottle. Congratulations Jeff. 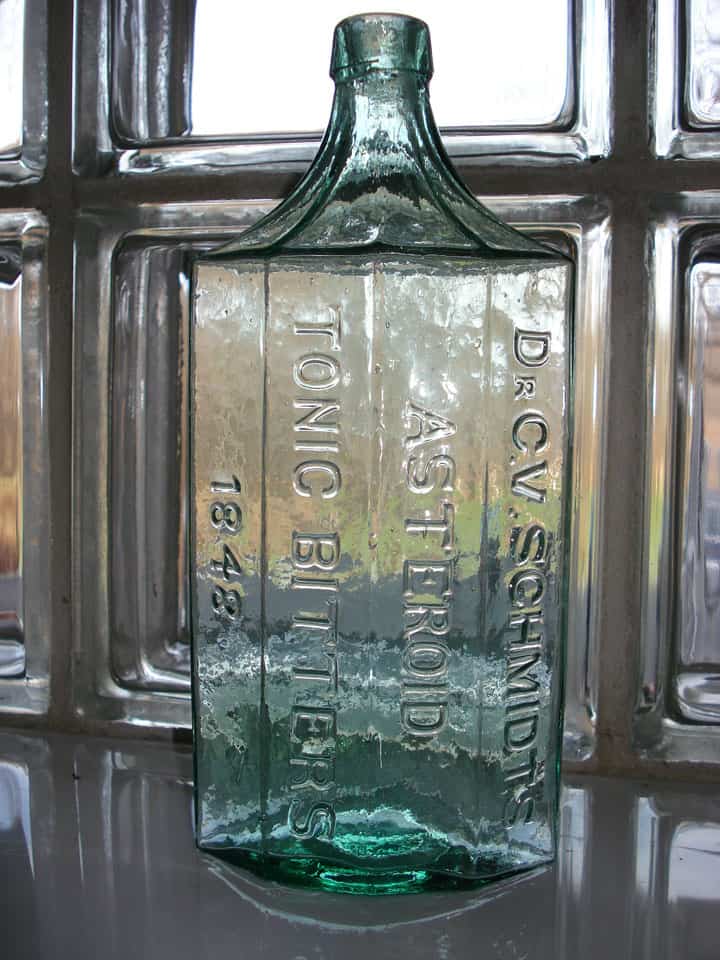 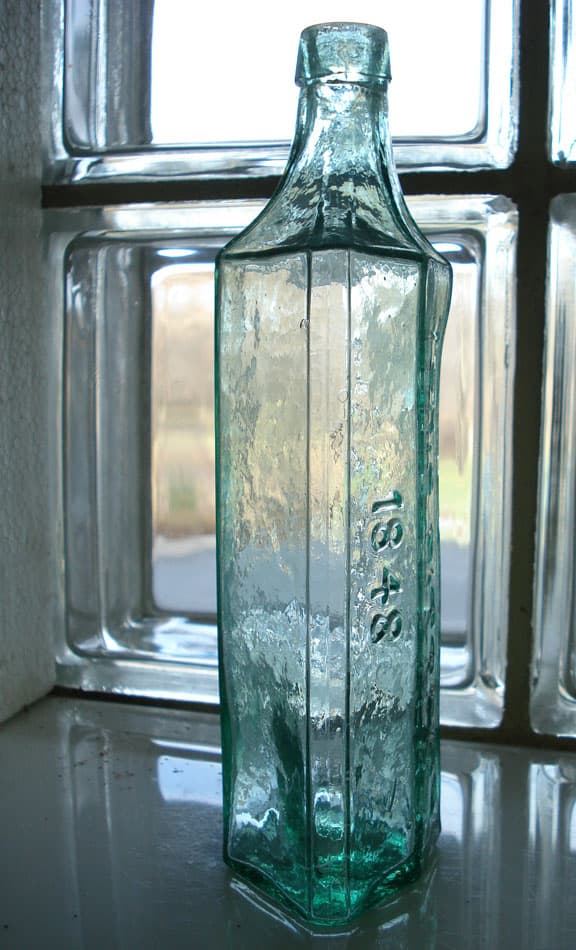 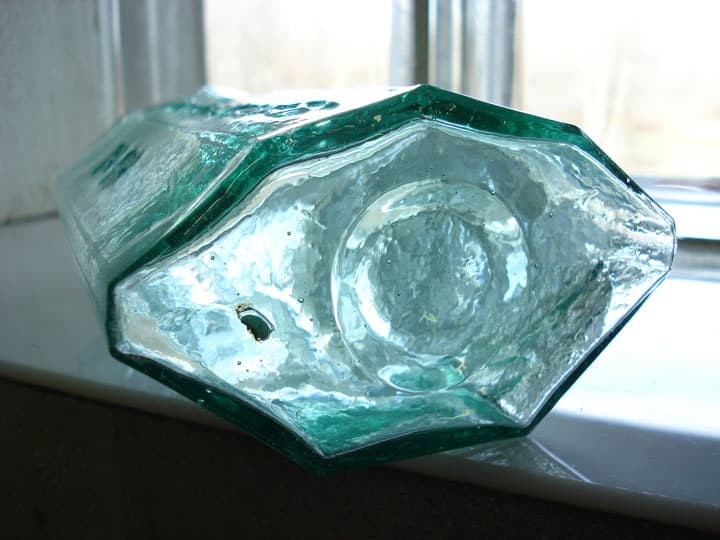 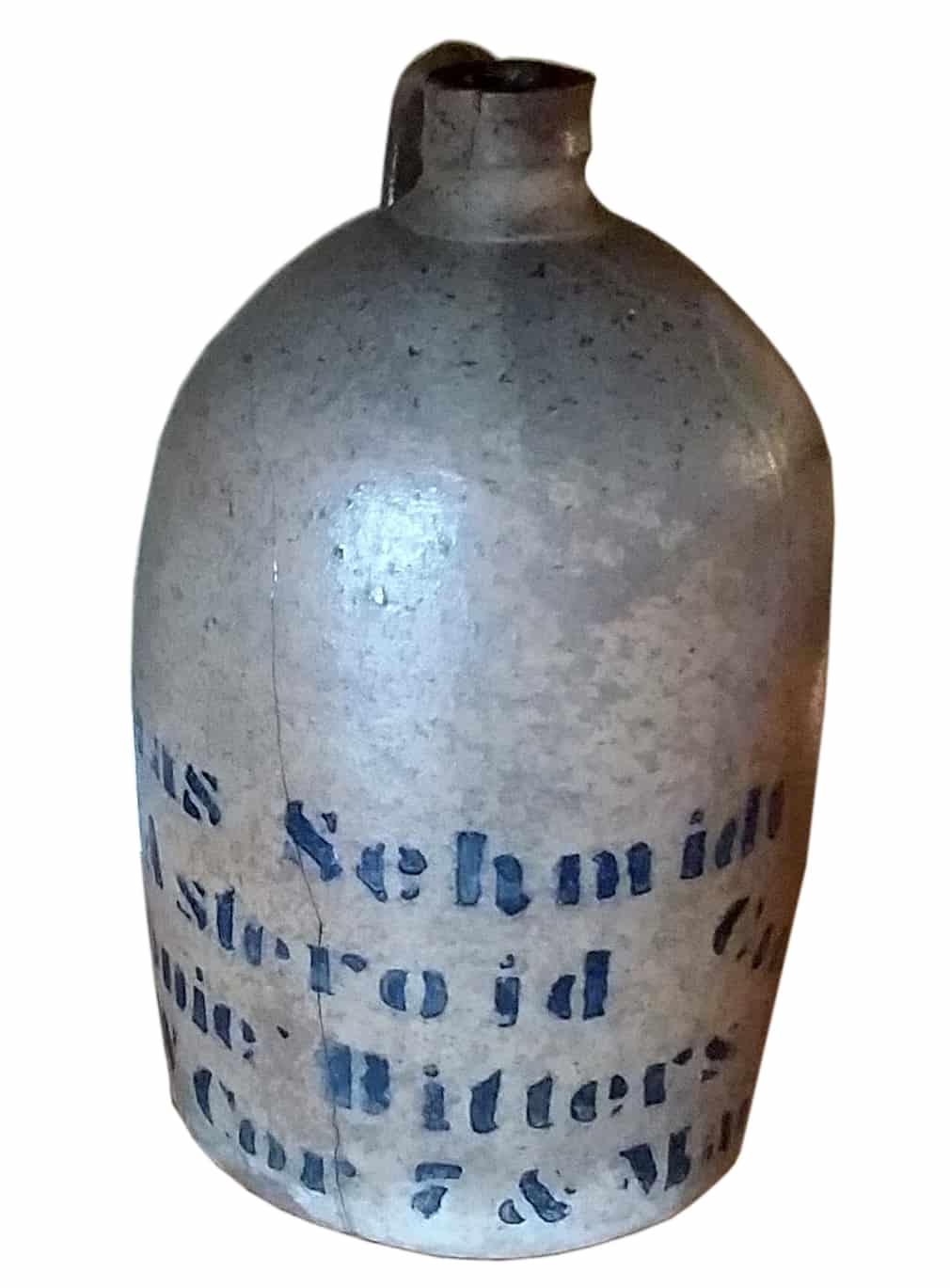 Ferdinand Meyer V is a native of Baltimore, Maryland and has a BFA in Fine Art and Graphic Design from the Kansas City Art Institute and School of Design. Ferdinand is the founding Principal of FMG Design, a nationally recognized design consultation firm. Ferdinand is a passionate collector of American historical glass specializing in bitters bottles, color runs and related classic figural bottles. He is married to Elizabeth Jane Meyer and lives in Houston, Texas with their daughter and three wonderful grandchildren. The Meyers are also very involved in Quarter Horses, antiques and early United States postage stamps. Ferdinand is the past 6-year President of the Federation of Historical Bottle Collectors and is one of the founding members of the FOHBC Virtual Museum.
View all posts by Ferdinand Meyer V →
This entry was posted in Auction News, Bitters, Stoneware, Tonics and tagged Absinthe, Apocalypse, asteroid, bitters, C. V. Schmidt, comet, Gerardus D. Bouw, Jeff Burkhardt, John Feldmann, Star, Tonic, wormwood. Bookmark the permalink.