Bitters Spotting (and more) at Manchester 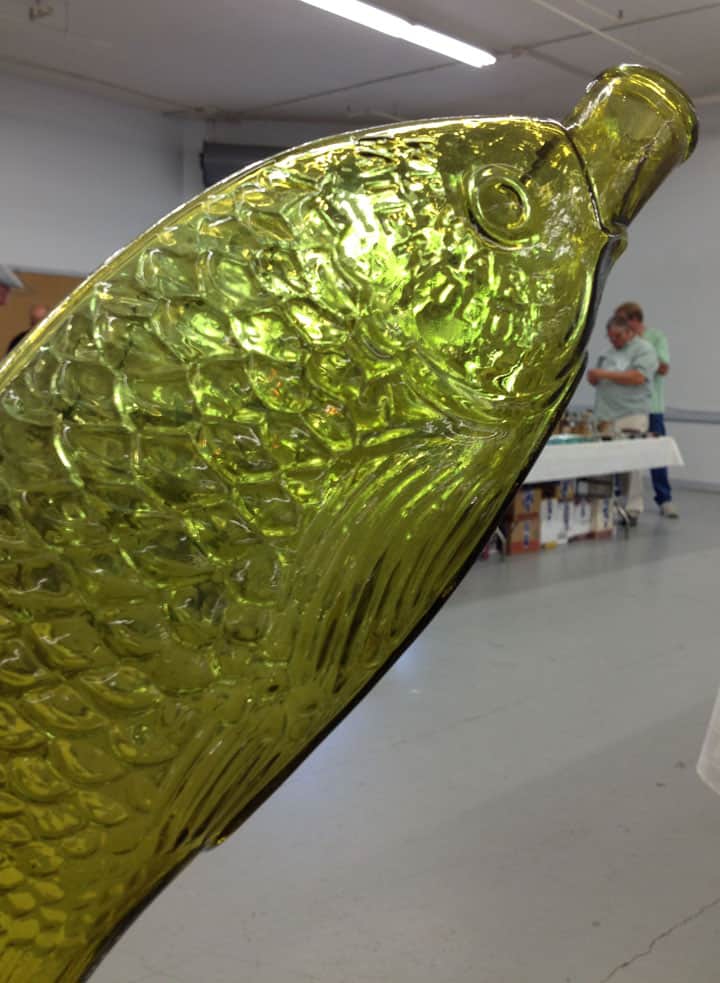 Whew, been cramming for the past 3 or so days trying to get the September | October issue of Bottles and Extras ready for the editorial board and then the printer. Tight deadline. You see, photo sorting, design layout, reviews, proofing, printing, more proofs and then the postal service all take time. Especially Uncle Sam.

I noted a few days ago that I would report on bitters bottles at Manchester. Though I could only see about 75% of the tables (that is another story), here are a few of the standouts. This will be a growing post as I filter through the news. 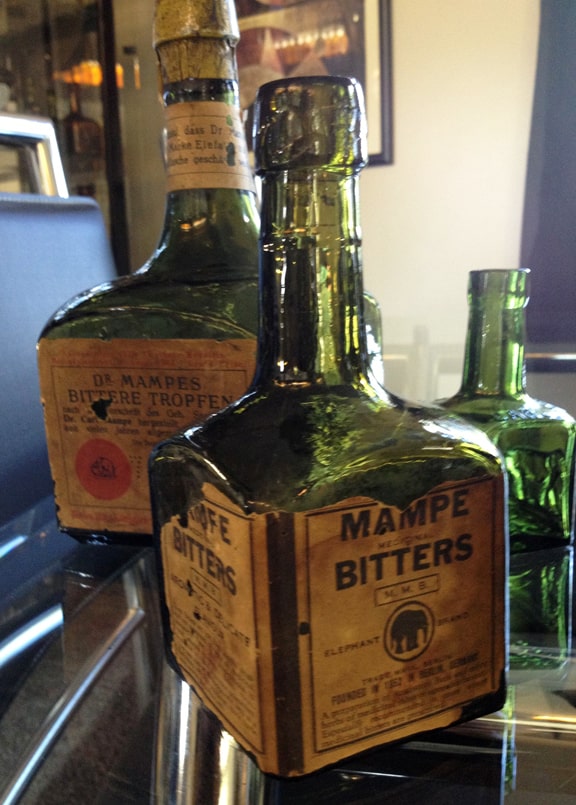 First on the Bitters lineup was my pre-Manchester trip to see Frank Wicker in Indiana. I was in Fort Wayne for business and met Elizabeth in Cleveland. From there we flew to Manchester on Thursday, 25 July 2013. The highlight at Frank’s was looking at all his great Carl Mampe bottles. Read: Wicker Visit – Austin Healey’s and Elephants 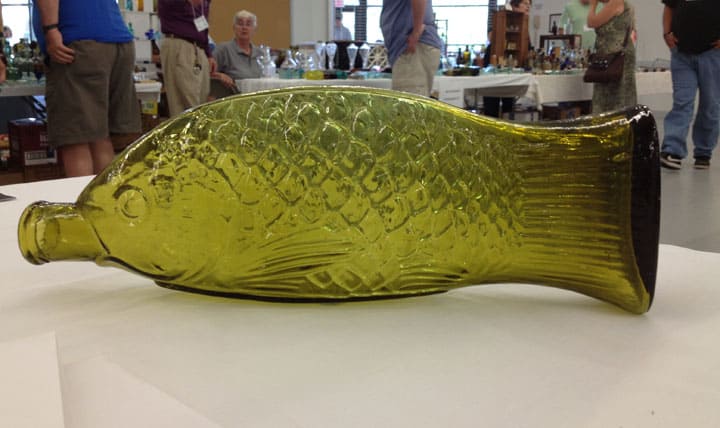 My first breathtaker at the show occurred on Saturday, 26 July. The culprit was a citron Fish Bitters that Bill Taylor (Oregon) pulled out of his hat. He said he just picked it up as a person was delivering it to him. My quick Iphone pics do not do this justice. You know most citron colors seem more yellow. This is Citron Green. Killer and with the most pronounced embossing that I have seen in some time. Congratulations Bill. 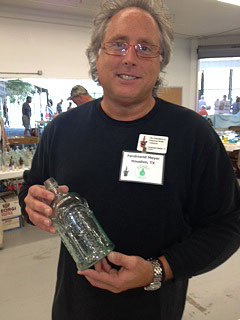 Yours truly was finally able to bring home the extremely rare, aqua, Constitution Bitters. Read: Constitution Bitters – The oldest Figural Bitters? This example, the third known, was found in East Texas last year. Read: “I Heard it Through the Grapevine”. This could be the oldest figural bitters.

I was contacted early on about the bottle and inadvertently pushed the finder to American Bottle Auctions. Jeff sold the bottle during the evening of the Baltimore Antique Bottle show at some ungodly hour when the auction closed. I was zipped and missed the auction. Michael George, Manchester co-chair, snagged the bottle and well, now I have it. Kind of a full circle thing. The other two examples are in the collections of Sandor Fuss in Colorado and Dick Watson in New Jersey.

Jeff Burkhardt and I are having a healthy debate on whether this is a figural. He feels it is not as it is not a queen, pig, corn, or a cabin. He said a Gazebo is not an object I believe. He may have had me until he said cabin in his figural list. If a Drakes cabin is a figural, I feel a stylized gazebo should be too. Does it really matter? Probably not. 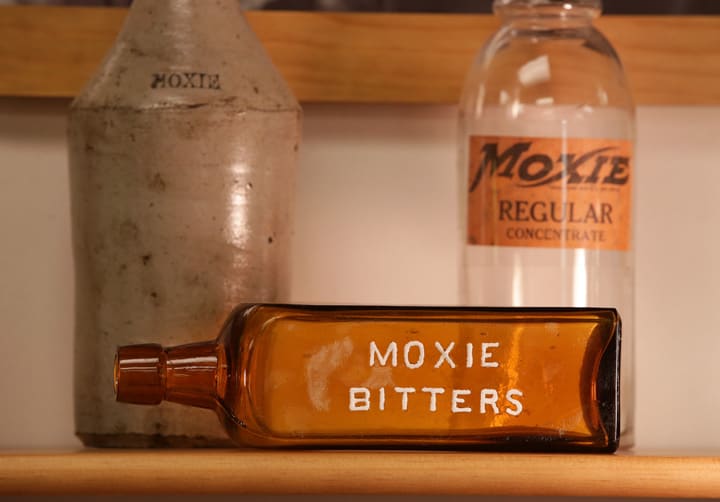 Next on the line-up is the Moxie Bitters that was sitting in the fantastic Moxie Bottle display by Dave Waris. Read: Moxie Bitters – So What is Moxie? So simple but oh so extremely rare. It seems like there would be more of these squares. 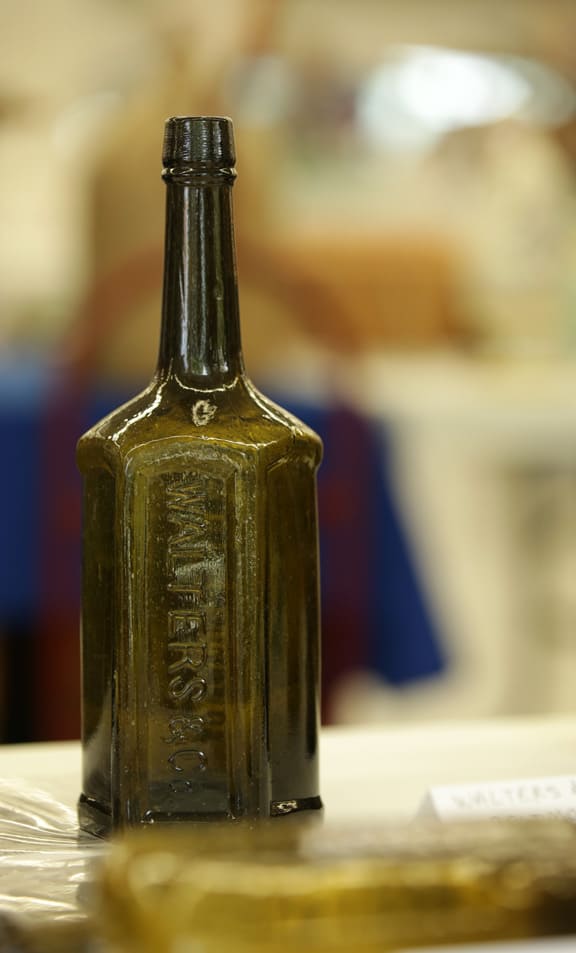 Walters & Co. / Baltimore. This excellent photograph was taken at the Roberge table by Scott Selenak,

As you may have read, there were two Walters & Co. / Baltimore at the show. Clark and Evelyn Roberge had their stellar example and I had brought mine. It was fun to compare as these are extremely rare. I suspect this is a bitters bottle but that has not been proven. Read: William T. Walters and his Museum Bottle 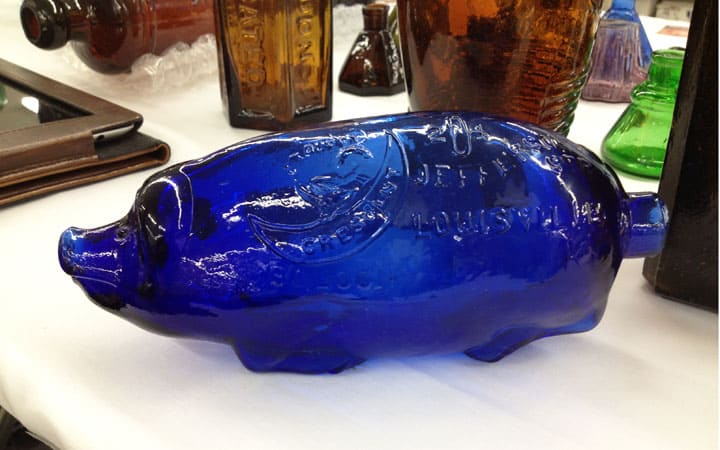 Jack Hewitt was kind enough to stop by my table, stoop down and carefully unwrap his newest addition. The cobalt blue Duffy’s Crescent Saloon figural pig is extremely rare in this color with two known examples, the other being in the collection of Ralph Van Brocklin. This piece was fun to handle and sit on my table for a moment before he returned back to the sty. This was snagged on ebay recently by his brother. Read: Figural Pig Series | Duffy Crescent Saloon Figural Pig Bottle 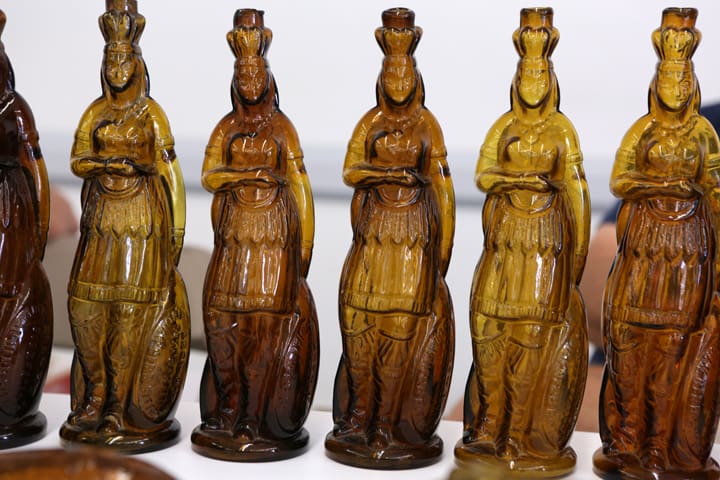 Calamity with a Queen: A good friend of mine told me a story of a ‘mean ole dealer’ that embarrassed and shamed her for accidentally clinking a bottle on a crowded table. Let’s face it, it happens to all us on both sides of the table. She had gone in search of an Indian Queen as a gift to a friend. She apologized profusely only to have the dealer make a scene and insist she pay for the bottle. After no damage could be found by anyone, including a prominent auctioneer, the situation only diffused when she walked away. Shameful behavior. 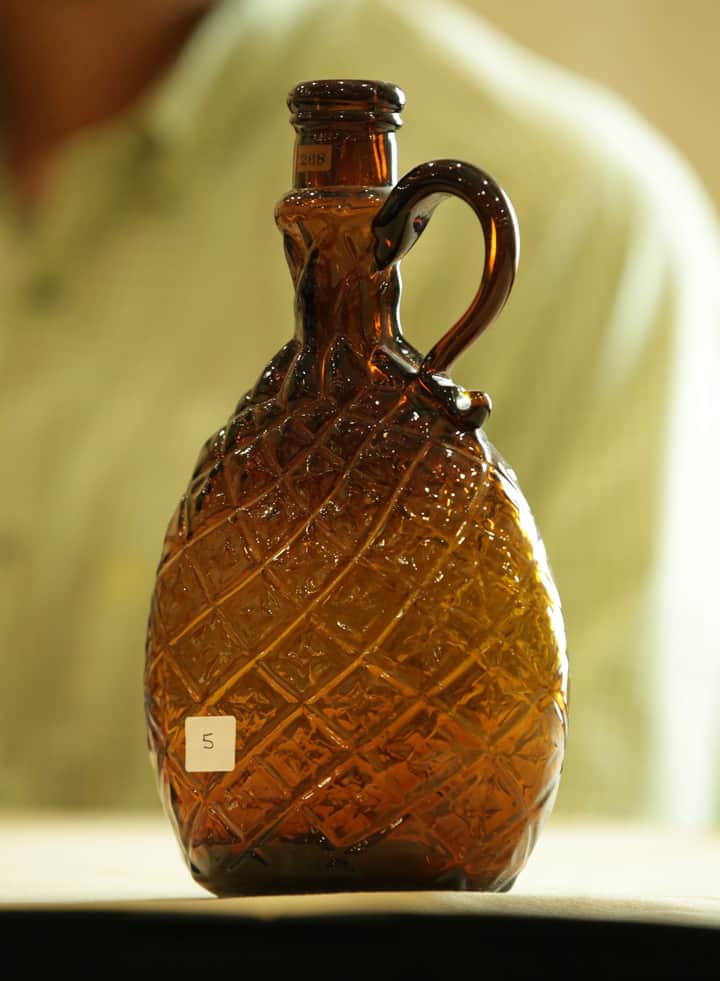 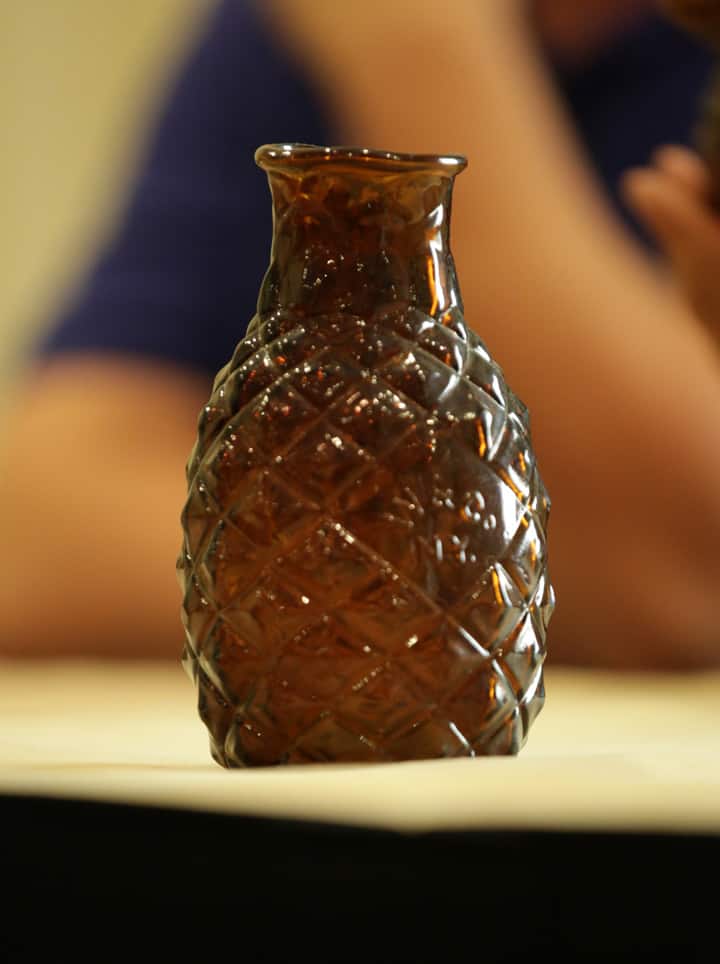 Hopefully, those at the show saw these two beautiful Pineapple figural bitters from the Mitchell collection. One was handled while the second one had an expanded mouth. They both were entered in the Bottle Battle. I saw these examples outside Tampa once at their home. Read: Handled Pineapples Enjoyed in Sunny Florida. 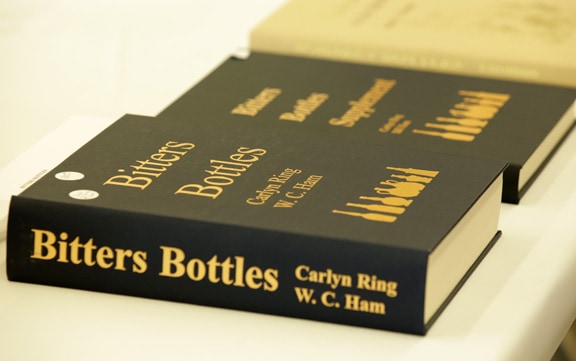 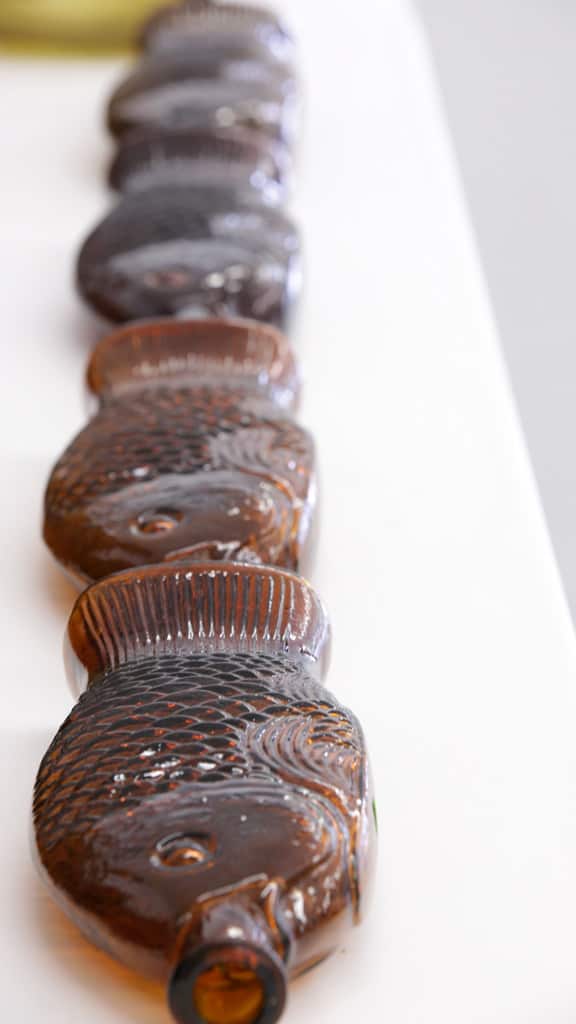 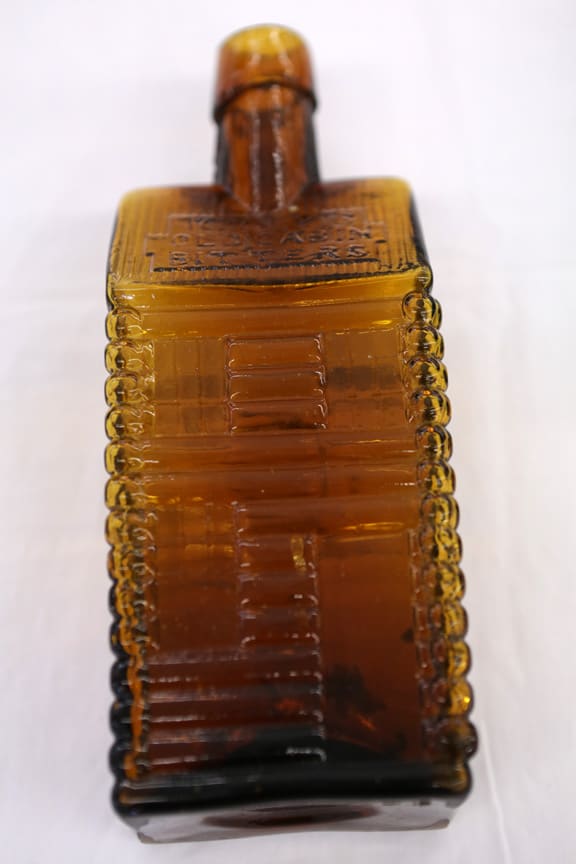 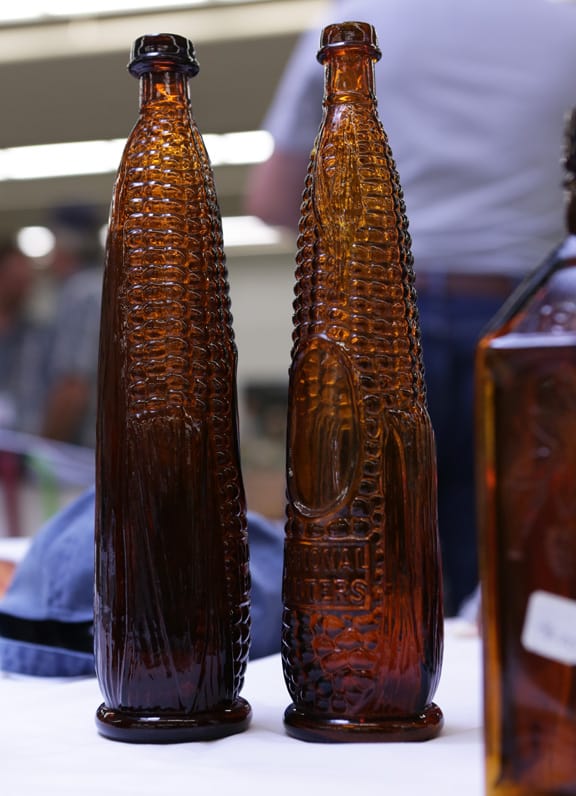 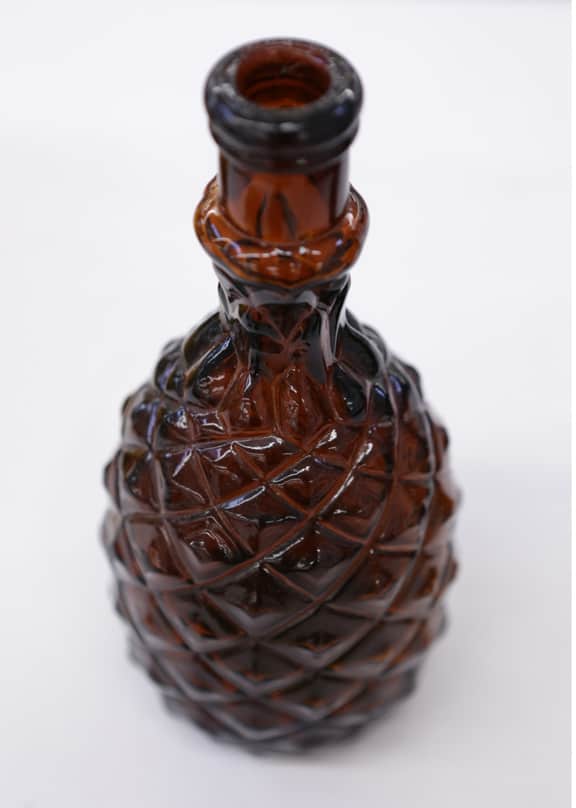 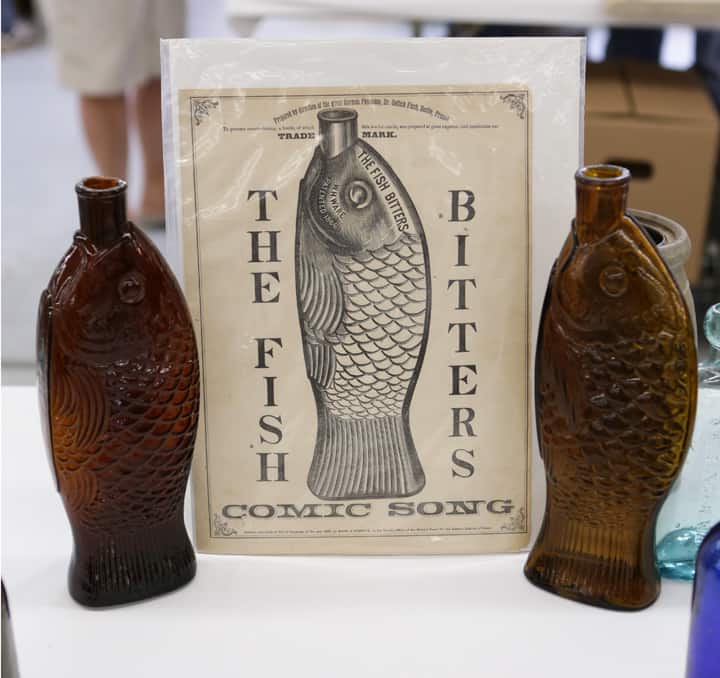 Ferdinand Meyer V is a native of Baltimore, Maryland and has a BFA in Fine Art and Graphic Design from the Kansas City Art Institute and School of Design. Ferdinand is the founding Principal of FMG Design, a nationally recognized design consultation firm. Ferdinand is a passionate collector of American historical glass specializing in bitters bottles, color runs and related classic figural bottles. He is married to Elizabeth Jane Meyer and lives in Houston, Texas with their daughter and three wonderful grandchildren. The Meyers are also very involved in Quarter Horses, antiques and early United States postage stamps. Ferdinand is the past 6-year President of the Federation of Historical Bottle Collectors and is one of the founding members of the FOHBC Virtual Museum.
View all posts by Ferdinand Meyer V →
This entry was posted in Bitters, Bottle Shows, Collectors & Collections, Figural Bottles, FOHBC News, News and tagged Bill Taylor, Carle Mampe, Constitution Bitters, Duffy’s Crescent Saloon, Ferdinand Meyer V, Fish Bitters, Frank Wicker, Manchester, Moxie Bitters, Walters & Co.. Bookmark the permalink.

1 Response to Bitters Spotting (and more) at Manchester