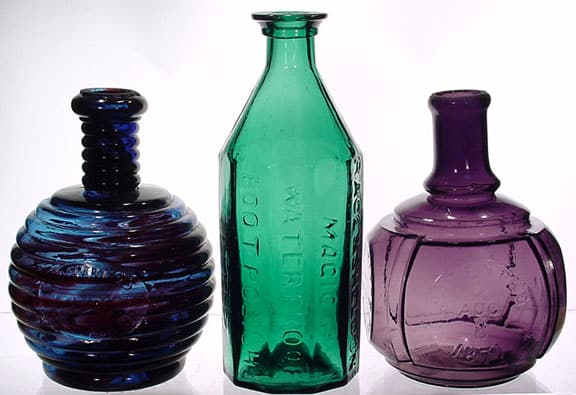 The grenade was thrown at the base of the fire so the glass would smash and release the chemicals – putting out the fire. 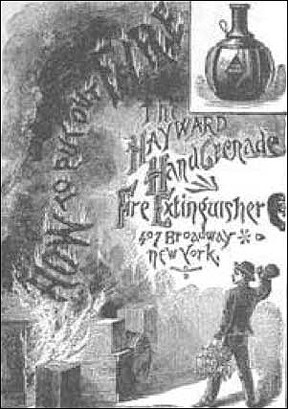 Recently I have written and posted about collectible antique Glass Paperweights, Target Balls, Marbles, Witch Balls, Fly Traps, Glass Fishing Floats, Lightning Rod Balls and Christmas Ornaments and now would like to discuss Glass Fire Grenade Bottles. Again, the common geometric shape is the circle as all of these objects are usually round.

What amazes me is that there are just so many areas of our hobby to investigate and potentially collect. Of course ‘glass’ is the material that really binds all this together.

Glass fire extinguisher ‘grenades’ or bottles were containers that held chemicals and were typically six to eight inches tall. They had a narrow neck with a round body and were sealed with cement and a cork. The cement seal prevented the liquid from escaping should the cork shrink. Other versions had a foil seal placed over the cork to create additional protection. There was often a wire loop on the neck used to hang the grenade from a hook on the wall or a nail. Often, two or three of these grenades were sold at time in a wire basket.

The grenade was thrown at the base of the fire so the glass would smash and release the chemicals – putting out the fire. Most were made after 1870 and until about 1910. These glass grenades are rare since they were made to be destroyed. They are often ornate and come in striking colors, so they are very sought after by collectors.

[from Wikipedia] Another type of carbon-tetrachloride extinguisher was the Fire Grenade. This consisted of a glass sphere filled with CTC, that was intended to be hurled at the base of a fire (early ones used salt-water, but CTC was more effective). Carbon tetrachloride was suitable for liquid and electrical fires and the extinguishers were fitted to motor vehicles. Carbon-tetrachloride extinguishers were withdrawn in the 1950s because of the chemical’s toxicity–exposure to high concentrations damages the nervous system and internal organs. Additionally, when used on a fire, the heat can convert CTC to Phosgene gas, formerly used as a chemical weapon.

I have put together a Gallery of pictures showing a rather wide range of shapes and design. The colors, as you will see, are outstanding. 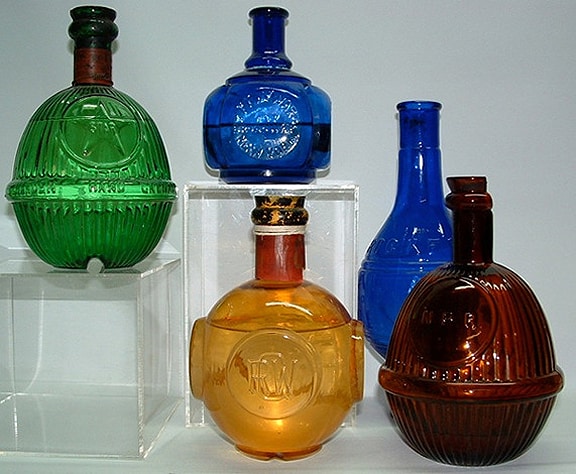 Read More: In Case of Fire…Throw Grenade! by Pam Poston 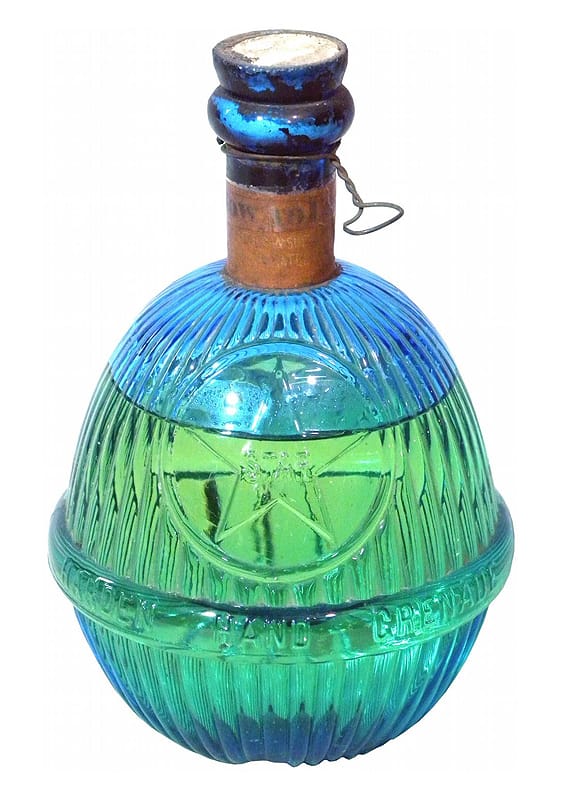 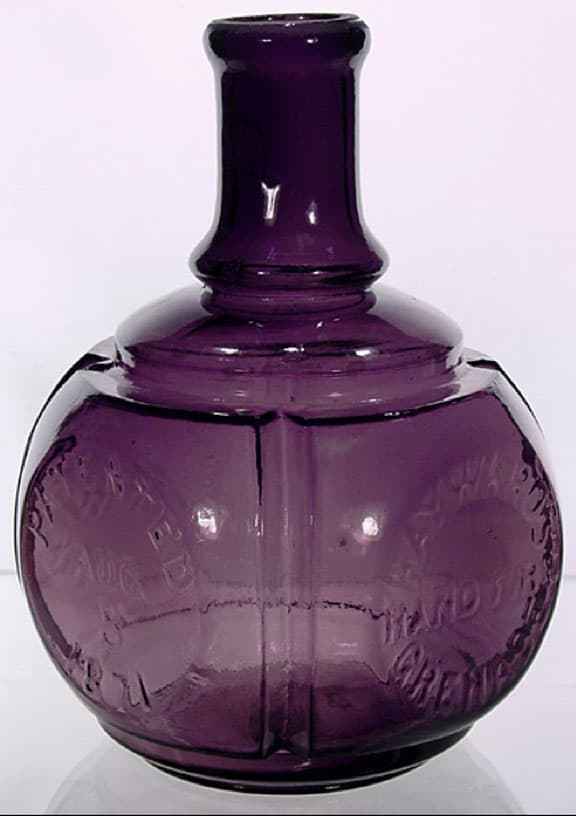 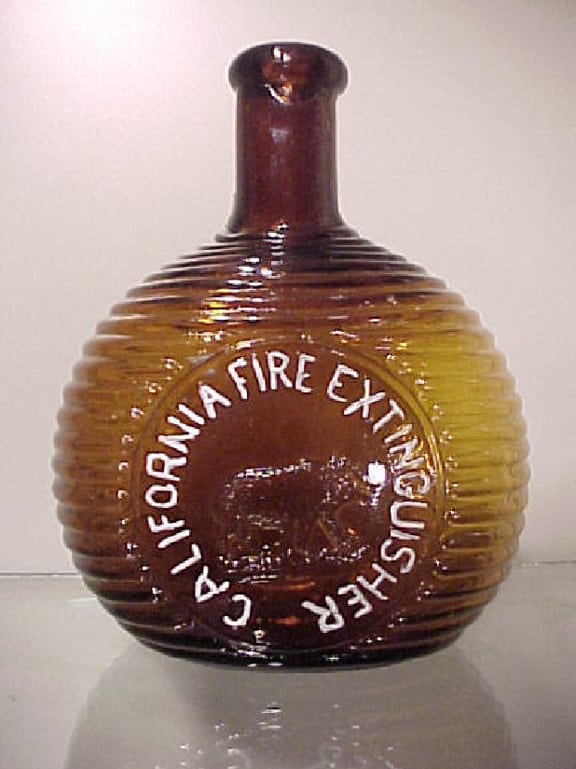 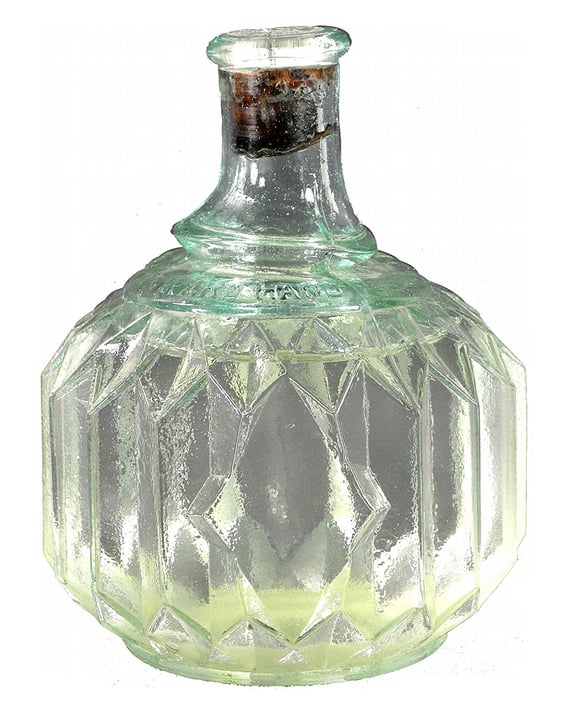 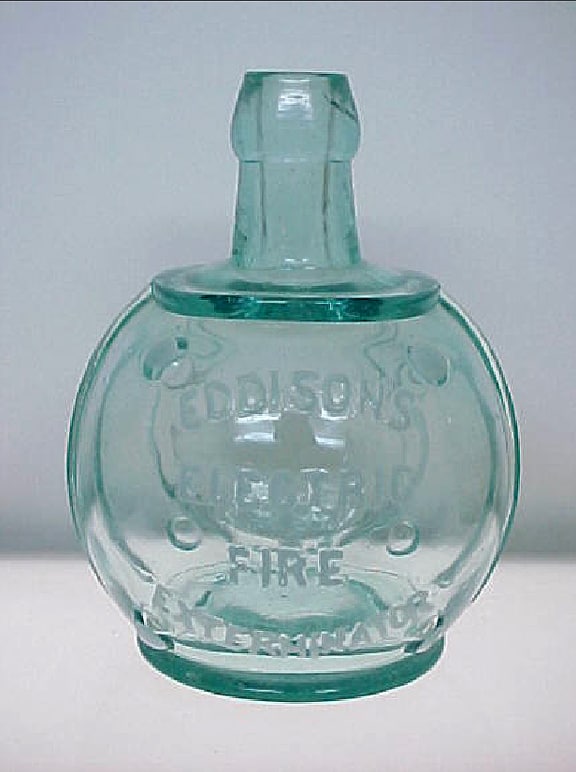 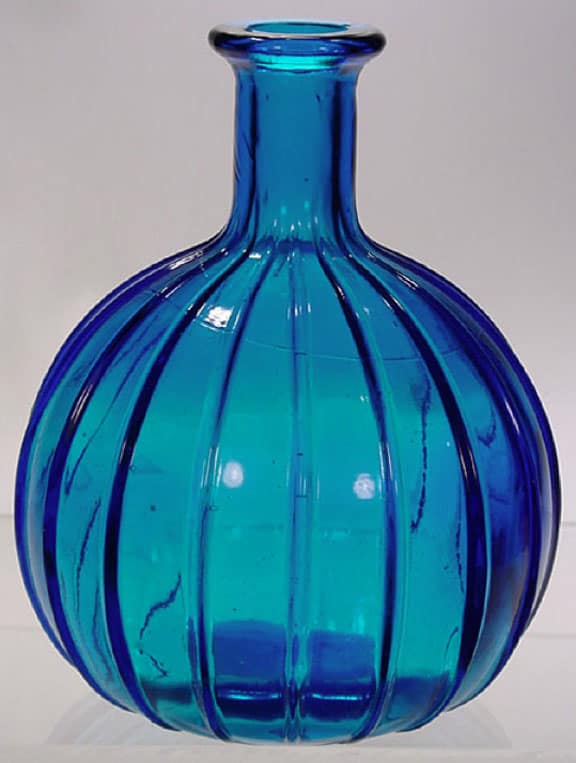 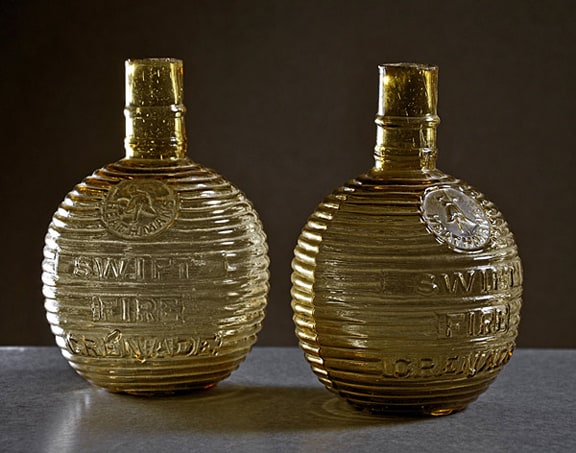 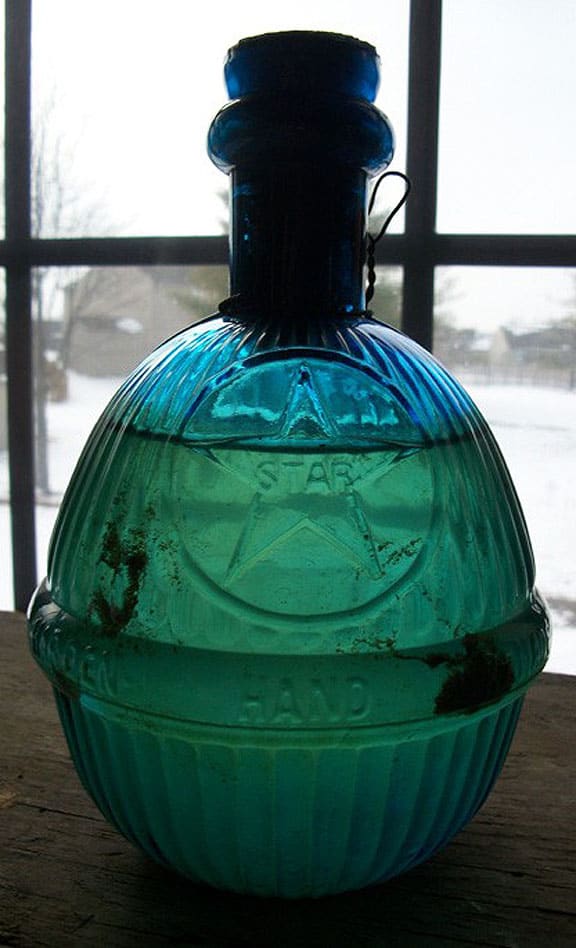 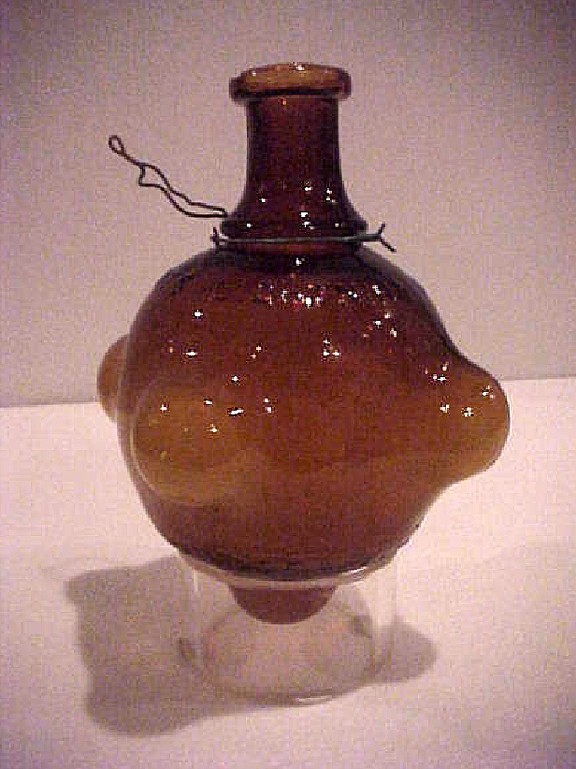 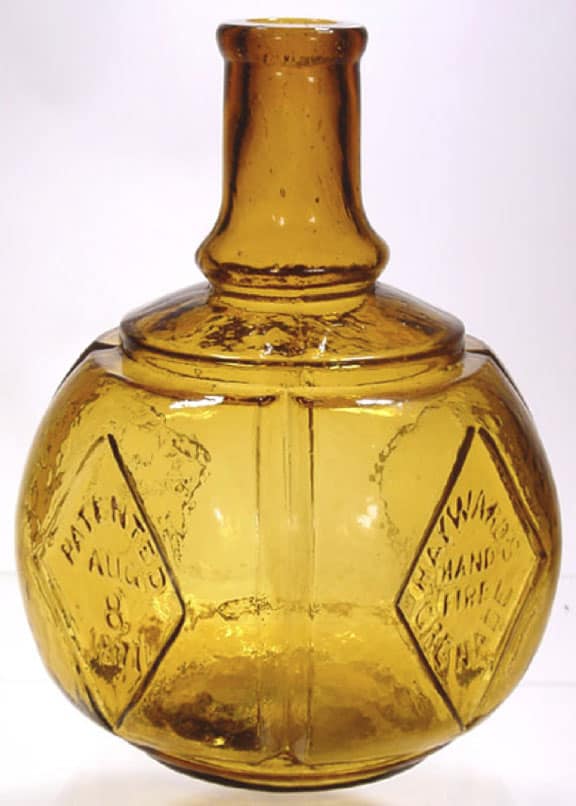 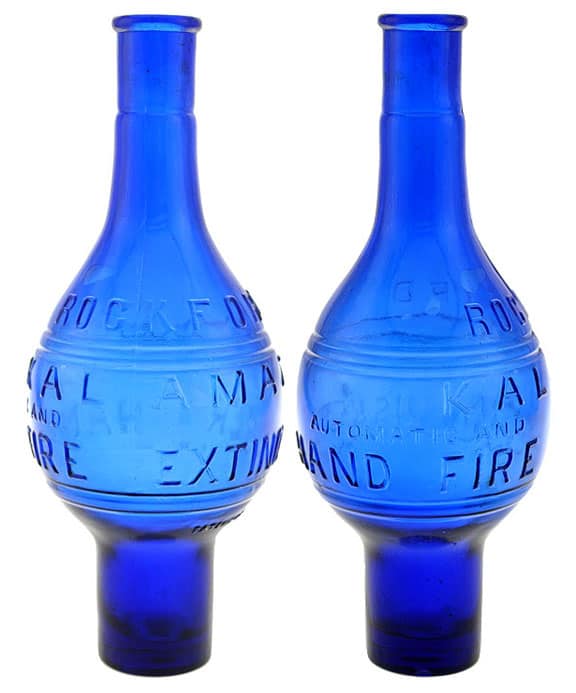 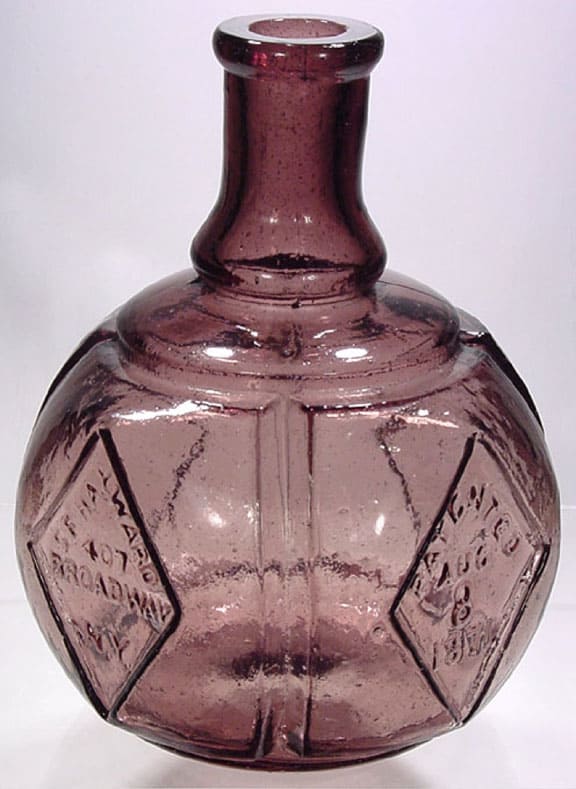 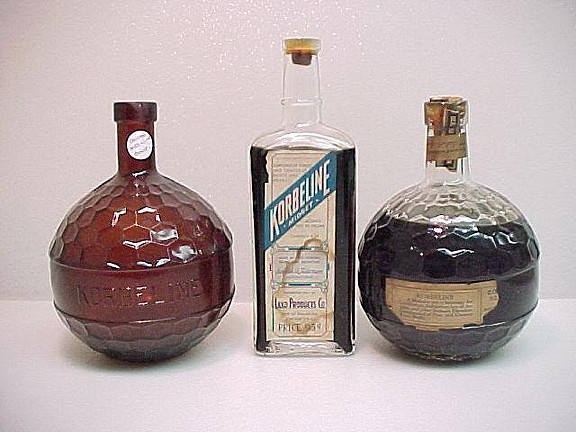 The Korbeline bottles are not fire grenades, they are medicine bottles. – John Slowiak 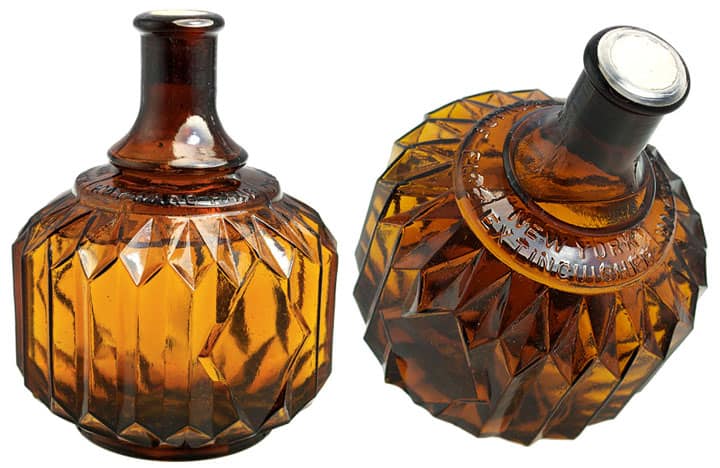 Ferdinand Meyer V is a native of Baltimore, Maryland and has a BFA in Fine Art and Graphic Design from the Kansas City Art Institute and School of Design. Ferdinand is the founding Principal of FMG Design, a nationally recognized design consultation firm. Ferdinand is a passionate collector of American historical glass specializing in bitters bottles, color runs and related classic figural bottles. He is married to Elizabeth Jane Meyer and lives in Houston, Texas with their daughter and three wonderful grandchildren. The Meyers are also very involved in Quarter Horses, antiques and early United States postage stamps. Ferdinand is the past 6-year President of the Federation of Historical Bottle Collectors and is one of the founding members of the FOHBC Virtual Museum.
View all posts by Ferdinand Meyer V →
This entry was posted in Figural Bottles, Fire Grenades, History, Questions, Technology and tagged arbon-tetrachloride, Bottle, california, chemicals, CTC, Edison's, Electric, Extinguisher, fire, Glass, Grenade, Harden, Harts, Hayward's, Kalamazoo, Korbeline, Rockford, Star. Bookmark the permalink.