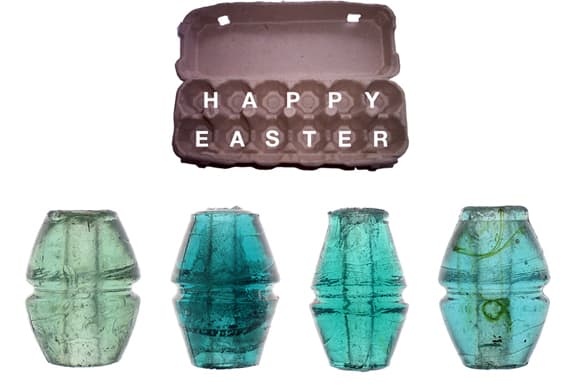 It has been almost a year since I started Peachridge Glass. I remember one of my first posts was for Easter 2011 (Read Happy Easter – CD 700 Egg Insulators). I wanted to see tonight if any new CD 700 ‘Egg’ insulators had surfaced on-line but did see anything new. I did however find some really cool, glass Guy Wire ‘Eggs’.

Guy wire strains are used to break the conductivity of a guy wire. They are placed in-line in the guy wire; the two ends of the wire are threaded through each other’s eyes with the strain in between, held in compression, so that if the strain were to break, the guy wire would still hold, albeit without insulation.

Very rare egg-style, only one known. This has been in a hobby for many years and is thought to be American, but there is no proof. As with all eggs, the two mold halves are clamped together and the glass poured through a port in the side; the glass is then broken off, and remaining stub is ground flush; hence overall dimensions do not vary.

Another very rare egg, one of two known in this style (both straw). Also known in the hobby for many years, and thought to be American, perhaps a West Coast glass company– the straw color is reminiscent of Maydwell.

Smaller of the two California (C.G.I.) strains. This uncommon egg is embossed at one end, on the top lip “10” (the factory style number) above “CALIFORNIA”, and on the bottom lip “PAT APL’D FOR”. Like all eggs, it has a large round grind mark at the pouring port. Comes in sage green only.

Larger of the two California (C.G.I.) strains. Also embossed at one end, on the top lip “15” (the factory style number) above “CALIFORNIA”, and on the bottom lip “PAT APL’D FOR”. Both egg styles are about equally uncommon. Like all eggs, it has a large round grind mark at the pouring port. Comes in sage green (left), smoke, SCA and yellow.

Ferdinand Meyer V is a native of Baltimore, Maryland and has a BFA in Fine Art and Graphic Design from the Kansas City Art Institute and School of Design. Ferdinand is the founding Principal of FMG Design, a nationally recognized design consultation firm. Ferdinand is a passionate collector of American historical glass specializing in bitters bottles, color runs and related classic figural bottles. He is married to Elizabeth Jane Meyer and lives in Houston, Texas with their daughter and three wonderful grandchildren. The Meyers are also very involved in Quarter Horses, antiques and early United States postage stamps. Ferdinand is the past 6-year President of the Federation of Historical Bottle Collectors and is one of the founding members of the FOHBC Virtual Museum.
View all posts by Ferdinand Meyer V →
This entry was posted in Holiday, Insulators, Technology. Bookmark the permalink.