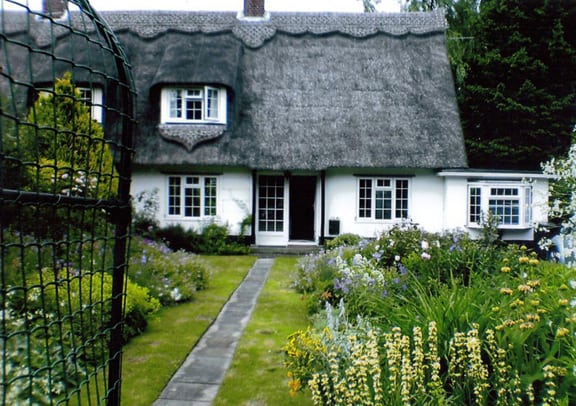 “A witch ball is a hollow sphere of plain or stained glass hung in cottage windows in 18th century England to ward off evil spirits, witch’s spells or ill fortune”

Yesterday I did a post on Sulphide Marbles (Read: Sulphide Marbles or Figural Marbles) which got me thinking of all of the other round or cylindrical glass historical and antique objects that we collect including Lightning Rod Balls, Target Balls, Witch Balls, Christmas Ornaments, Paper Weights, Friendship Balls, Gazing Balls (read: Paperweight Collectors Association) and Glass Floats. Wow. I bet there are more.

I consider this aspect another important part of our historical glass collecting community where the common link is our love of glass. Elizabeth and I also collect Lightning Rod Balls and we adore the historical and architectural significance of these glass adornments on weather vanes. Our cactus and succulent gardens at Preach Ridge also have a few strategically placed glass Gazing Balls. Of course we all also remember…

“I’ll get you my little pretty”

I noticed that the latest Norman C. Heckler Auction had a Witch Ball in their current line-up so why not continue with a little about Witch Balls and a few pictures. 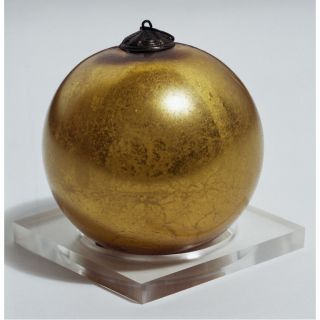 [from Wikipedia] A witch ball is a hollow sphere of plain or stained glass hung in cottage windows in 18th century England to ward off evil spirits, witch’s spells or ill fortune, though the Witch’s Ball actually originated among cultures where witches were considered a blessing and these witches would usually “enchant” the balls to enhance their potency against evils. Later, they were often posted on top of a vase or suspended by a cord (as from the mantelpiece or rafters) for a decorative effect. Witch balls appeared in America in the 19th century and are often found in gardens under the name gazing ball. However, gazing balls contain no strands within their interior.

According to folk tales, witch balls would entice evil spirits with their bright colours; the strands inside the ball would then capture the spirit and prevent it from escaping. Witch balls sometimes measure as large as 7 inches (18 cm) in diameter. The witch ball is traditionally, but not always, green or blue in color and made from glass (others, however, are made of wood, grass, or twigs instead of glass). Some are decorated in enameled swirls and brilliant stripes of various colors. The gazing balls found in many of today’s gardens are derived from the silvered witch balls that acted as convex mirrors, warding off evil by reflecting it away.

Because they look similar to the glass balls used on fishing nets, witch balls are often associated with sea superstitions and legends. In the Ozark Mountains, a witch ball is made from black hair that is rolled with beeswax into a hard round pellet about the size of a marble and is used in curses. In Ozark folklore, a witch that wants to kill someone will take this hair ball and throw it at the intended victim; it is said that when someone in the Ozarks is killed by a witch’s curse, this witch ball is found near the body.

The word witch ball may be a corruption of watch ball because it was used as a guard of evil spirits. It is sometimes claimed that the modern Christmas ornament ball is descended from the witch ball. The ornament was allegedly originally placed on the tree to dispel a visitor’s envy at the presents left beneath the tree. However as the modern Christmas bauble’s origins are documented in Lauscha, Germany in 1847, the provenance of this claim is debatable. 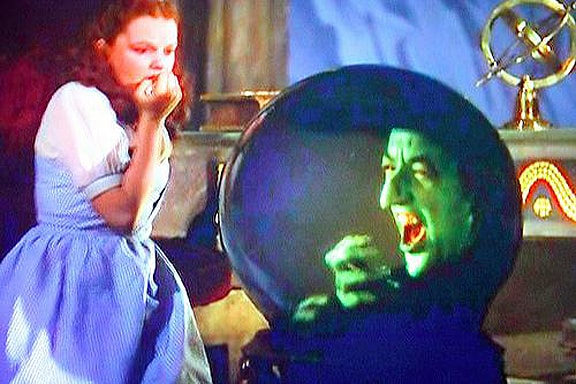 “I’ll get you my little pretty” One of the most famous crystal balls in entertainment history sold for $110,000 plus buyer’s premium. 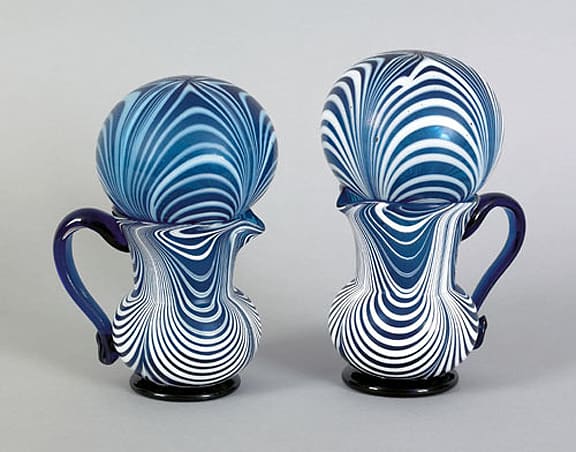 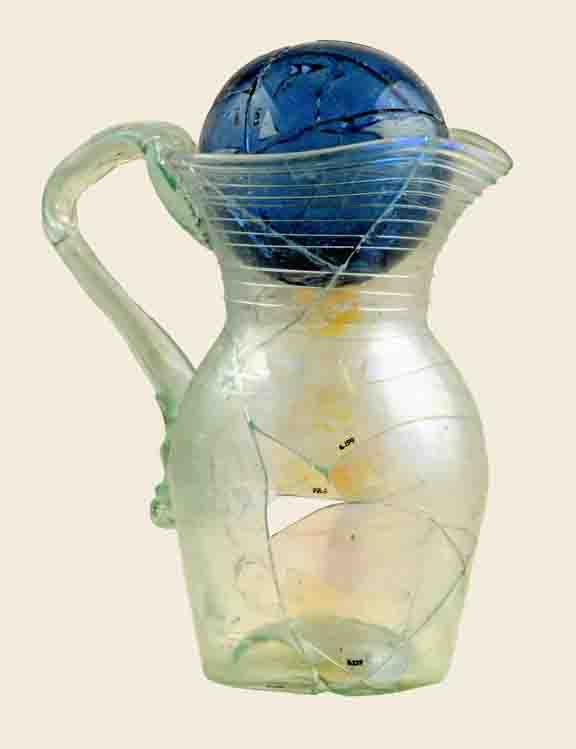 Witch ball used to cap and seal a glass pitcher 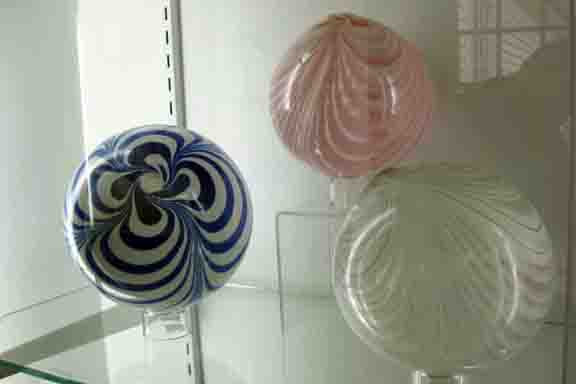 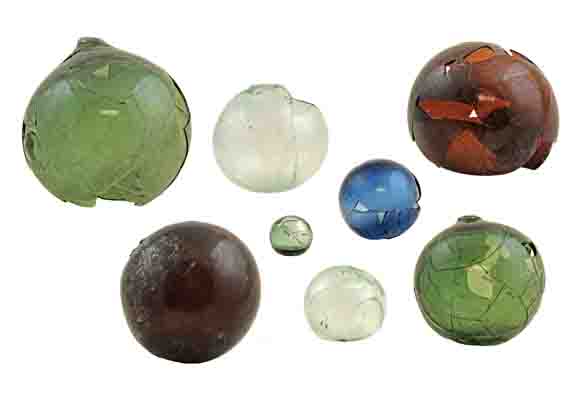 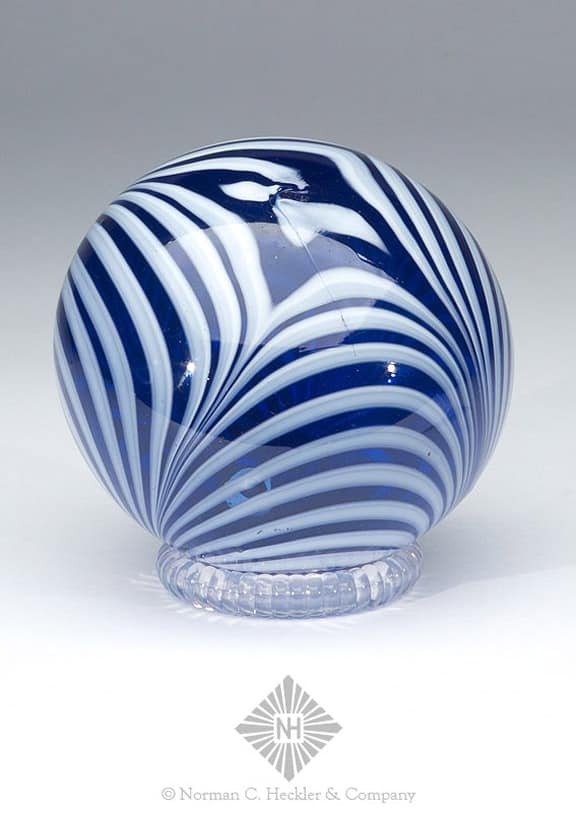 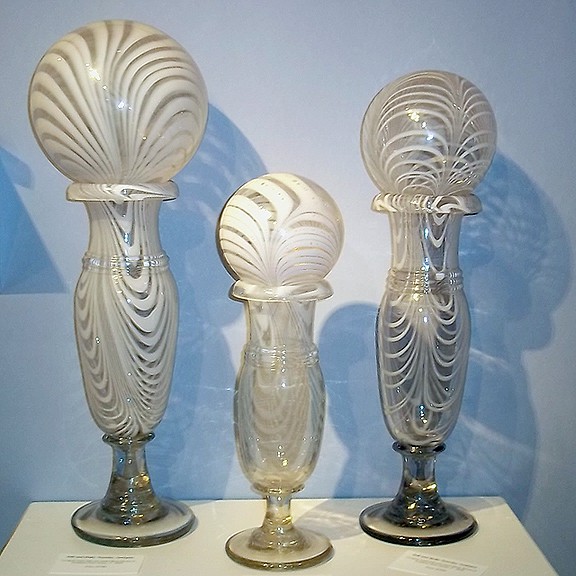 Witch Balls and Stands offered by Jeff and Holly Noordsy 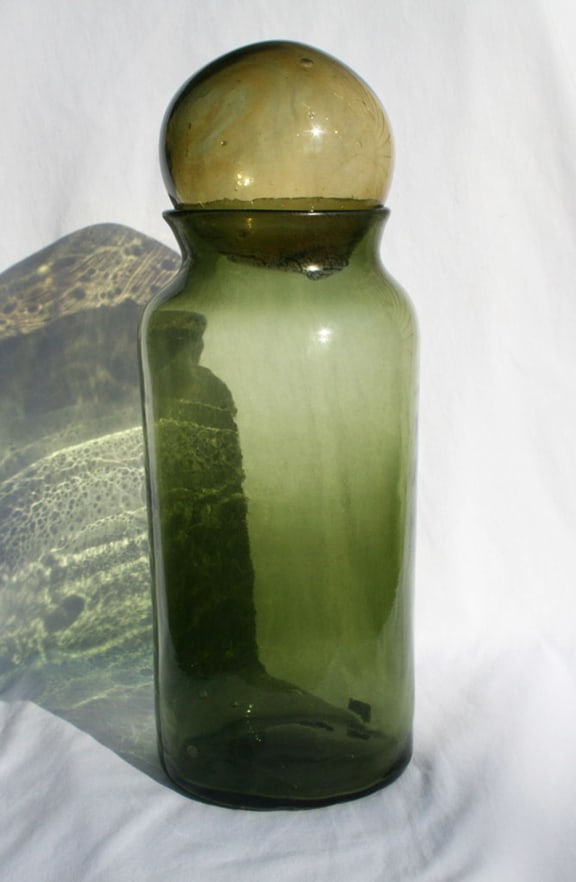 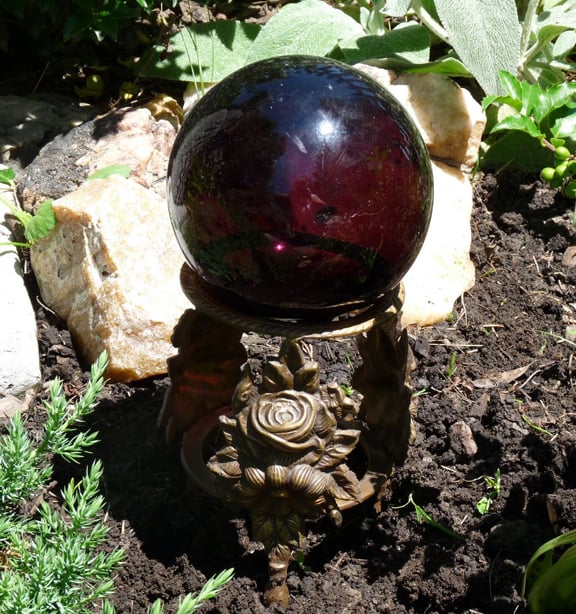 Unlike hanging friendship balls or witch balls that have a loop, gazing balls have a stem so they can securely sit in a stand. Larger sizes can be made, but may be difficult due to the weight of the blown glass. 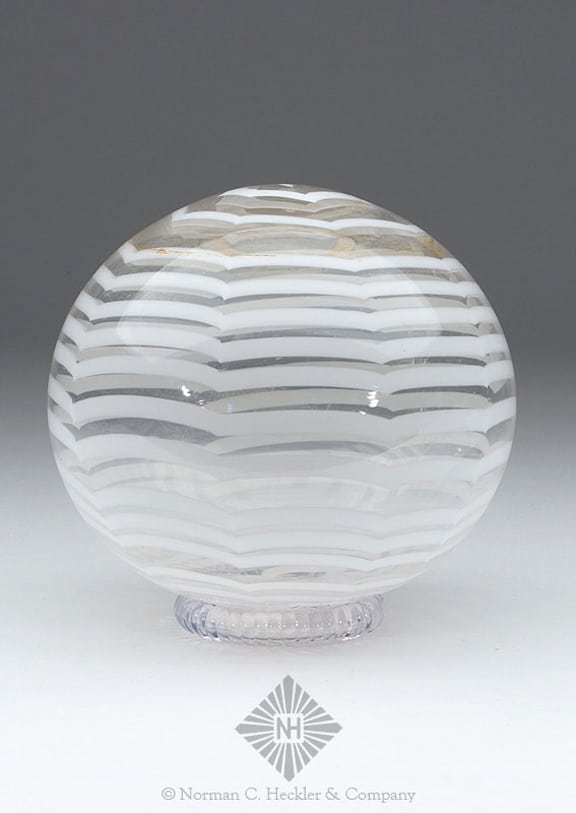 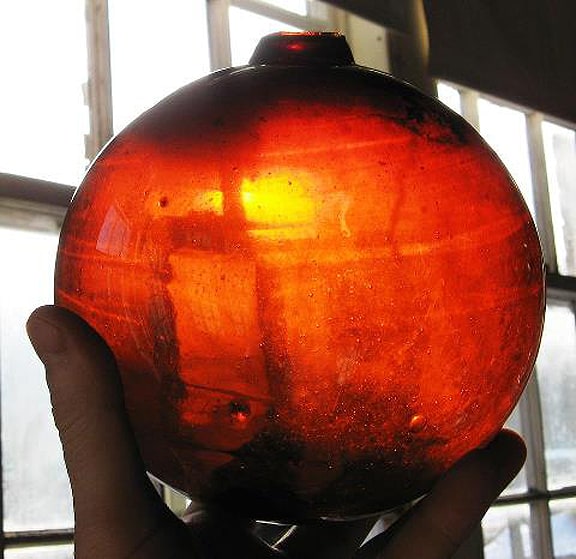 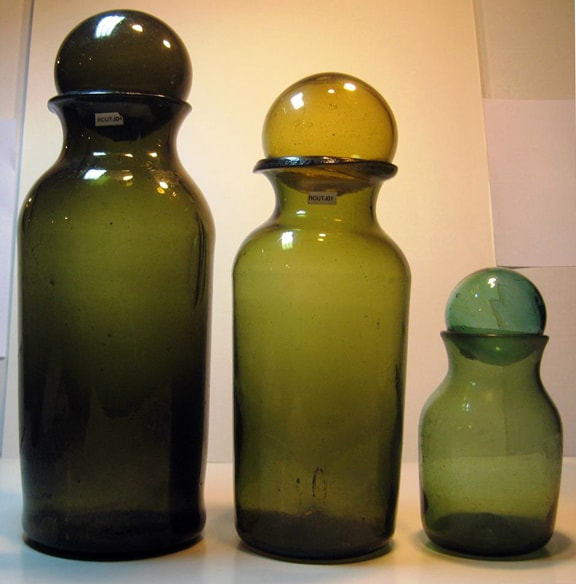 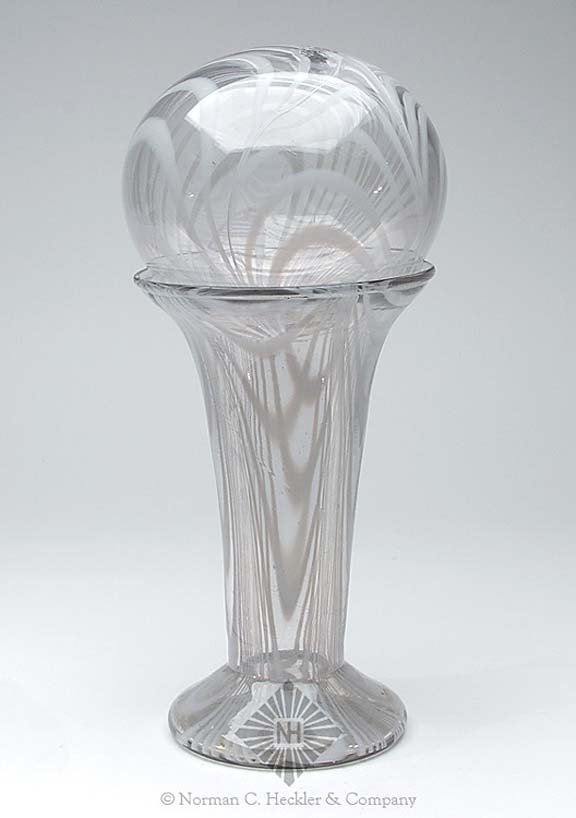 Ferdinand Meyer V is a native of Baltimore, Maryland and has a BFA in Fine Art and Graphic Design from the Kansas City Art Institute and School of Design. Ferdinand is the founding Principal of FMG Design, a nationally recognized design consultation firm. Ferdinand is a passionate collector of American historical glass specializing in bitters bottles, color runs and related classic figural bottles. He is married to Elizabeth Jane Meyer and lives in Houston, Texas with their daughter and three wonderful grandchildren. The Meyers are also very involved in Quarter Horses, antiques and early United States postage stamps. Ferdinand is the past 6-year President of the Federation of Historical Bottle Collectors and is one of the founding members of the FOHBC Virtual Museum.
View all posts by Ferdinand Meyer V →
This entry was posted in History, Witch Ball and tagged cottage window, evil spirits, Norman C. Heckler, spells, Tony Lennon, Witch Ball. Bookmark the permalink.