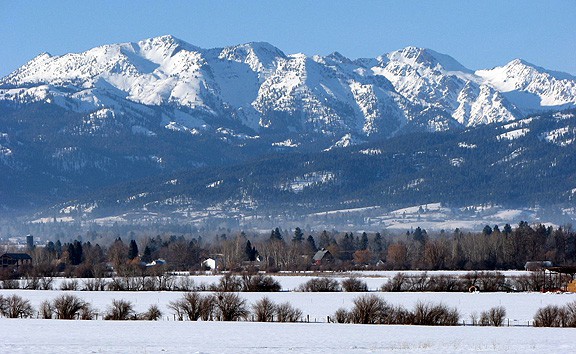 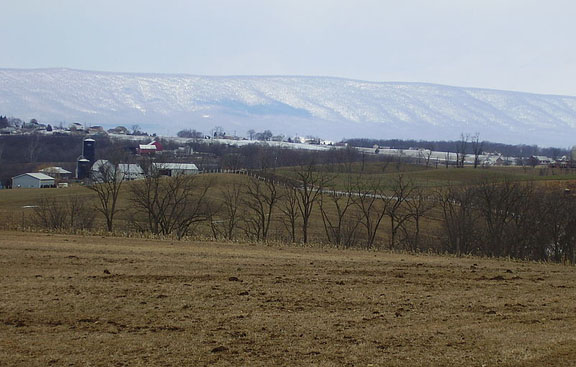 The “Great Wall” of Blue Mountain in Pennsylvania 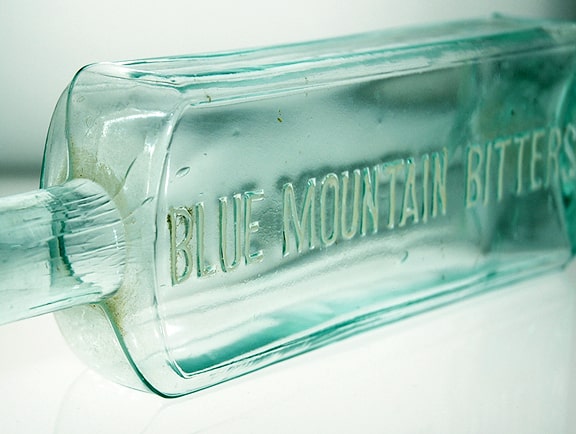 Here is a tough to find, rectangular Bitters bottle that I can find no support information. No advertising, no labeled examples and certainly no clues other than the name Blue Mountain Bitters embossed prominently on the front panel. *See updated and new information below.

Starting with the embossed name, we know that there is the Blue Mountains in Oregon and we start to wonder. “is this a ‘Western’ Bitters” or just a Bitters tagging on to the lure of the chain of mountains.

[Addendum #1] There is also a Blue Mountain that is a ridge that forms the eastern edge of the Appalachian mountain range in Pennsylvania. It cuts across the eastern half of the state from New Jersey to Maryland, providing a distinct boundary between a number of Pennsylvania’s geographical and cultural regions. To its northwest side are the southern and central mountains and valleys, the “coal region,” and the Poconos. To its southeast side are the Cumberland Valley, the “capital region,” Pennsylvania Dutch Country, and the Lehigh Valley.

[Addendum #2] Mystery solved. I have a shipping crate (see below) for this bitters. On the ends it says “BLUE MOUNTAIN BITTERS THE GREAT TONIC” but on the sides it advertises another product, “DUBBLES DOUBLE DISCOVERY FOR THE BLOOD & LIVER Waynesboro PA. I haven’t done any research on this, but the name seems vaguely familiar. Andy Agnew 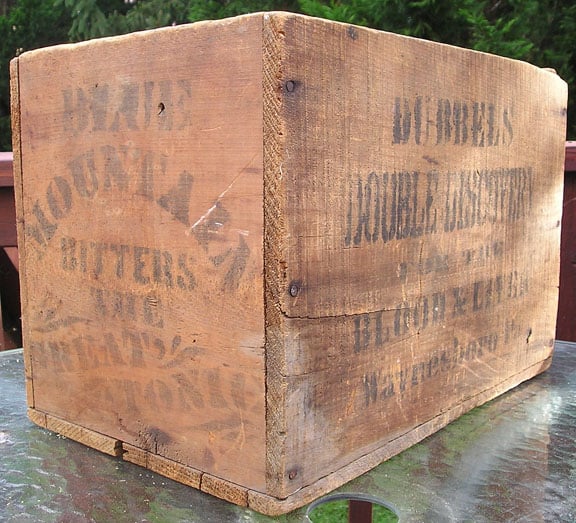 “BLUE MOUNTAIN BITTERS THE GREAT TONIC” but on the sides it advertises another product, “DUBBLES DOUBLE DISCOVERY FOR THE BLOOD & LIVER”, “Waynesboro PA.” – Andy Agnew 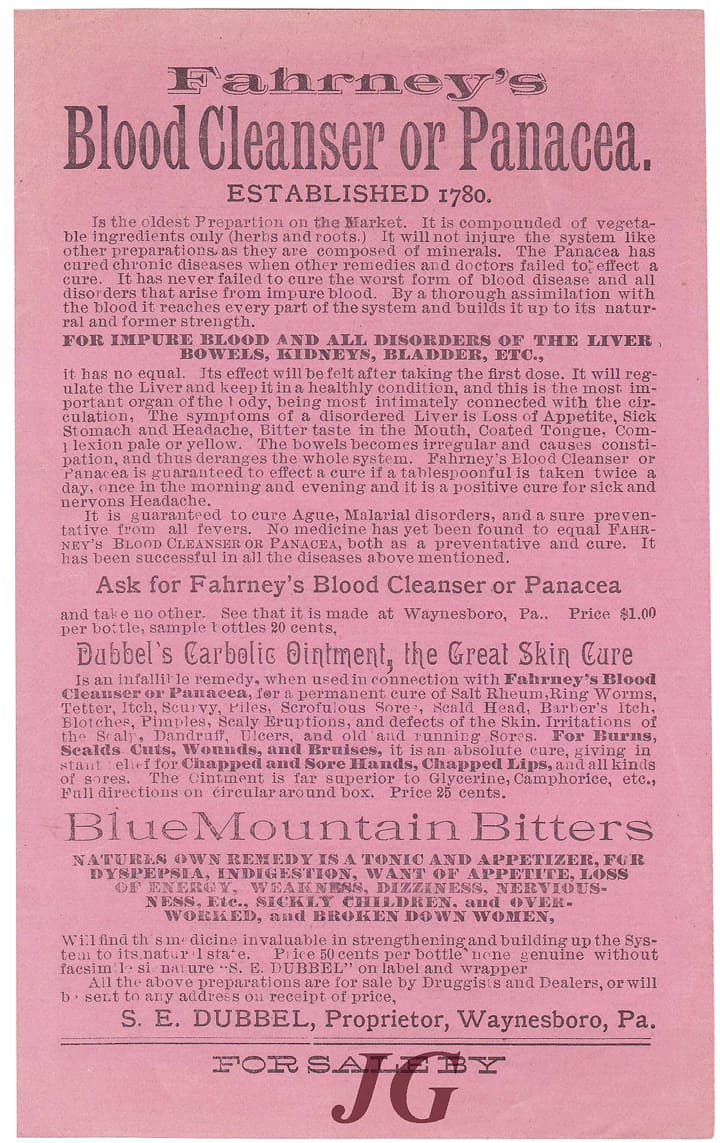 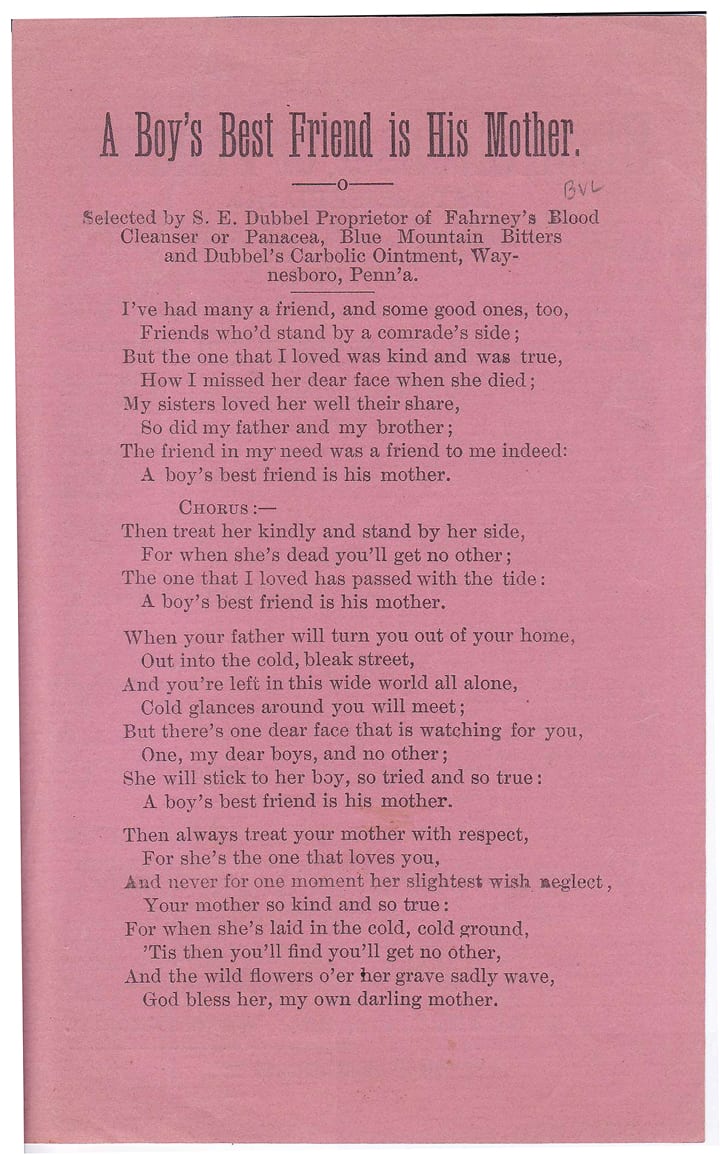 The Carlyn Ring and W.C. Ham’s Bitters Bottle book listing is as follows: 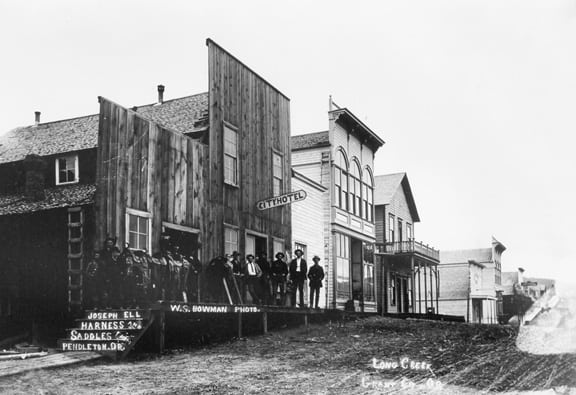 The Blue Mountains are a mountain range in the western United States, located largely in northeastern Oregon and stretching into southeastern Washington. Geologically, the range is a part of the larger rugged Columbia River Plateau, located in the dry area of Oregon east of the Cascade Range. The highest peaks in the range include the Elkhorn Mountains, Strawberry Mountain and Mount Ireland. The nearby Wallowa Mountains, east of the main range near the Snake River, are sometimes included as a subrange of the Blue Mountains. 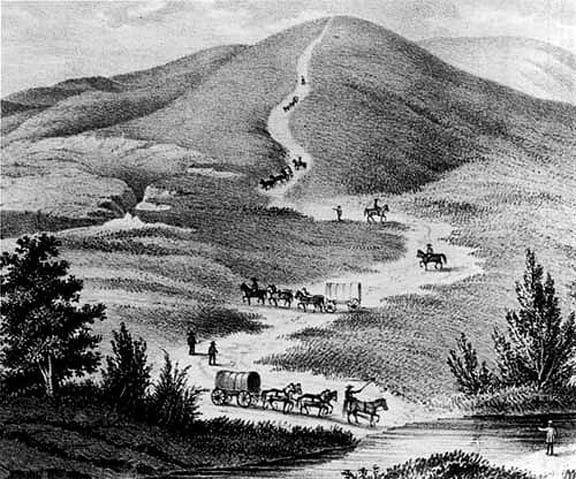 Descent of western flank of the Blue Mountains, Oregon Trail, 1849

In the middle 19th century, the Blue Mountains were a formidable obstacle on the Oregon Trail and was often the last mountain range American pioneers had to cross before reaching either southeast Washington near Walla Walla or passing down the Columbia River Gorge to end of the Oregon Trail in the Willamette Valley near Oregon City.

Read more on ‘Mountain’ embossed or themed bitters. All prompted by a request by Matthew Tigue Levant asking over on the facebooks Antique Bottles for Sale page, that he is “looking for any med, bitters, cure bottles with the word “Mountain” embossed in the glass”.

Ferdinand Meyer V is a native of Baltimore, Maryland and has a BFA in Fine Art and Graphic Design from the Kansas City Art Institute and School of Design. Ferdinand is the founding Principal of FMG Design, a nationally recognized design consultation firm. Ferdinand is a passionate collector of American historical glass specializing in bitters bottles, color runs and related classic figural bottles. He is married to Elizabeth Jane Meyer and lives in Houston, Texas with their daughter and three wonderful grandchildren. The Meyers are also very involved in Quarter Horses, antiques and early United States postage stamps. Ferdinand is the past 6-year President of the Federation of Historical Bottle Collectors and is one of the founding members of the FOHBC Virtual Museum.
View all posts by Ferdinand Meyer V →
This entry was posted in Bitters, Collectors & Collections, History, Questions and tagged Andy Adnew, bitters, blue, Blue Mountain, Blue Mountains, Cascade Range, Columbia River Gorge, cox, Dubbel, Dubbles, Gourd, Longcreek, Meyer Collection, Mountain, oregon, Oregon City, Oregon Trail, Pennsylvania, pioneers, shipping, Waynesboro, Western. Bookmark the permalink.