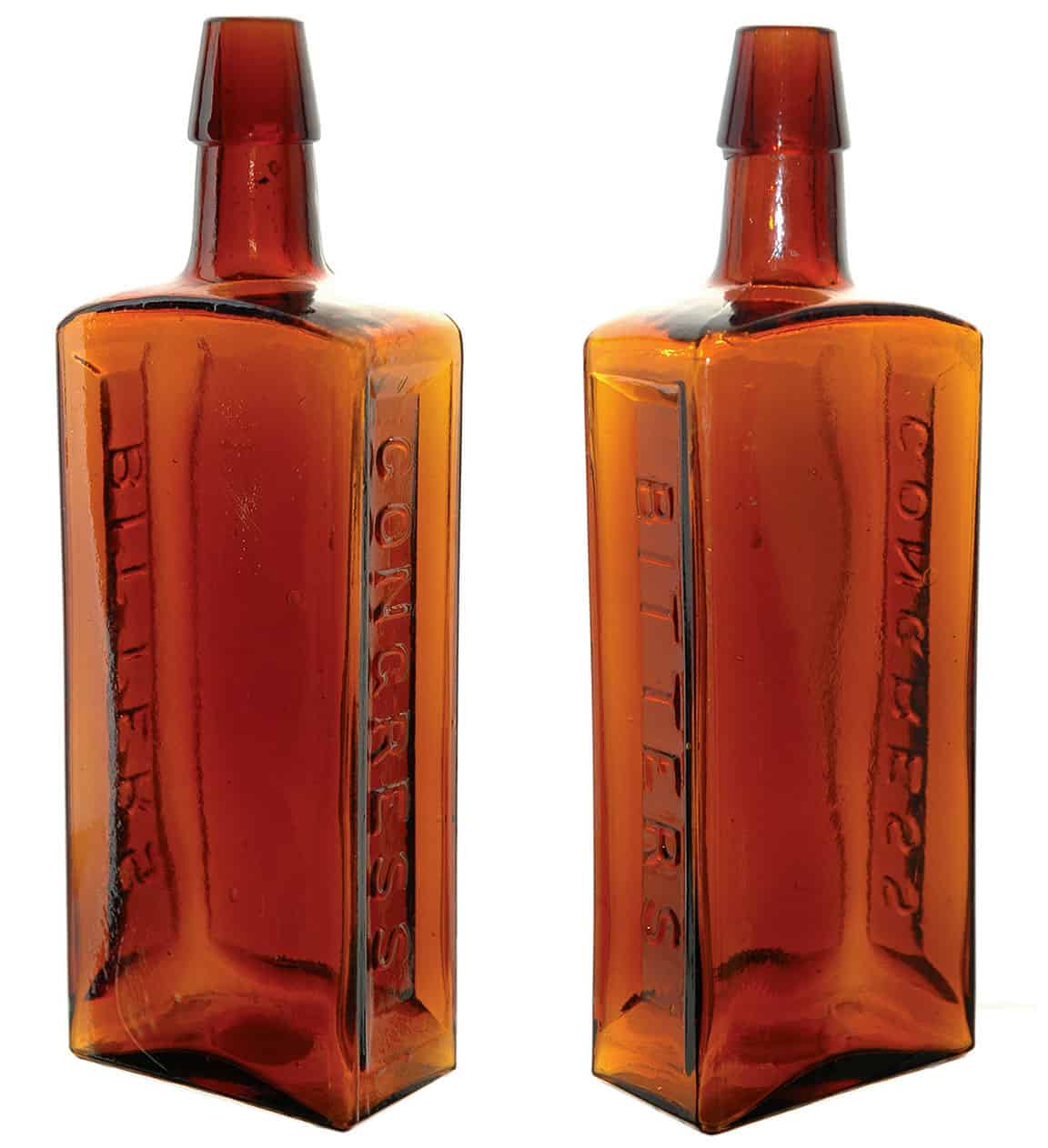 I have an amber rectangular embossed Congress Bitters bottle in my collection (pictured at the top of post) that I know nothing about. There is no proprietor name or location embossed on the bottle. Of course a paper label would have had that information, but the label is long gone. I also have an advertising trade card for Congress Bitters, The Great American Tonic with no proprietor name noted. It is pictured below. I always assumed the bottle and the card were related. 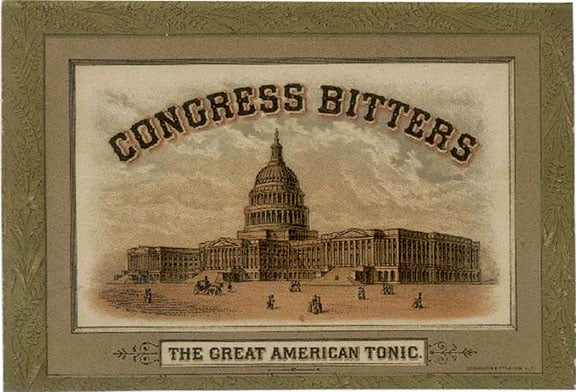 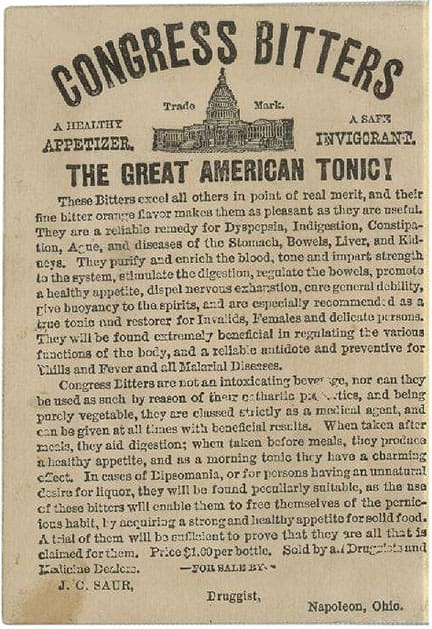 For the bottle, the Carlyn Ring and W.C. Ham listing in Bitters Bottles is as follows:

For the advertising card, the Capitol constitutes the logo or trade mark for Congress Bitters. The New York lithography firm of Schumacher & Ettlinger created this skillfully rendered view, giving the product a sense of delicacy. Fine details of a carriage and the building’s innumerable columns were set in a frame of flowers and ferns. The sophisticated design belied the cruder approach to the reverse. A tightly packed mass of text argued the benefits of the tonic “for invalids, females and delicate persons.” The bitters was sold for $1.00 a bottle by druggists and medicine dealers. Like many widely distributed trade cards, this one provided a space at the bottom for a local merchant to print their retail information. In my case, the druggist is J. C. Saur from Napoleon, Ohio.

Finally, I find some information noting that there was a Congress Bitters made by Dundas Dick & Co. in New York. The bitters was considered a fraud as it contained 29.06% of alcohol by volume and sugar with very little else except flavoring. A Special Bulletin was put out by the North Dakota State University, Regulatory Division in 1914. You can see a short clipping below followed by the full text.

“Congress Bitters are not an intoxicating beverage and being purely vegetable they can be used at all times with beneficial results. In the case of dipsomania or for persons having an unnatural desire for liquor they will be found peculiarly suitable as the use of the Bitters will enable them to free themselves of this pernicious appetite by acquiring a healthy appetite for solid foods.”

Sounds good, doesn’t it? A cure for the liquor habit and contains 29 per cent of alcohol, a little sugar, and scarcely anything else, except aromatics. In other words, about the strength of whiskey when reduced with water by the average drinker. A fine cure this would be, supplying the very thing that the unfortunate victim needed to avoid. Another of America’s disgraces in the patent medicine line.

Congress Bitters, “The Great American Tonic,” according to the label, is put out by Dundas Dick & C0., of New York, our Lab. No. 8586, and claims to be a healthful appetizer, a safe invigorant, and, according to the label, a remedy for dyspepsia, indigestion, constipation, ague and diseases of the stomach, bowels, liver and kidney.

“They purify and enrich the blood, tone and impart strength to the system stimulate the digestion, regulate the bowels, promote a healthy appetite, dispel nervous exhaustion, cure general debility, revive the physical energies, correct weakening irregularities, banish languor, and give buoyancy to the spirits. Are especially recommended as a true tonic and restorer for invalids, females and delicate persons.”

Not much question but what if enough were taken it would give buoyancy to the spirits. Among other things it is a nerve stimulator, a sure remedy for dyspepsia and indigestion; a reliable antidote for chills, fevers and. all malarial diseases.

On their circular they again repeat:

“Congress Bitters are not an intoxicating beverage. * * * They are classed strictly as a medical agent. Can be given at all times with beneficial results.”

This wonderful preparation, $1.00 per bottle for about 12 ounces, is found to contain as follows:

Aside from the sugar, there is very little of other solids. At most only a slight trace of mineral matter is present; the sugar and alcohol are the chief and essential constituents, together with flavoring matter in this beverage.

That is an unfamiliar and interesting name. Is it one person or two? A search and follow-up uncovers a special medicine-man from Edinburgh, Scotland. Dundas Dick was born around 1838 and brought up in Heriot’s Hospital, which was founded in Edinburgh to educate the sons of freeman of that city. 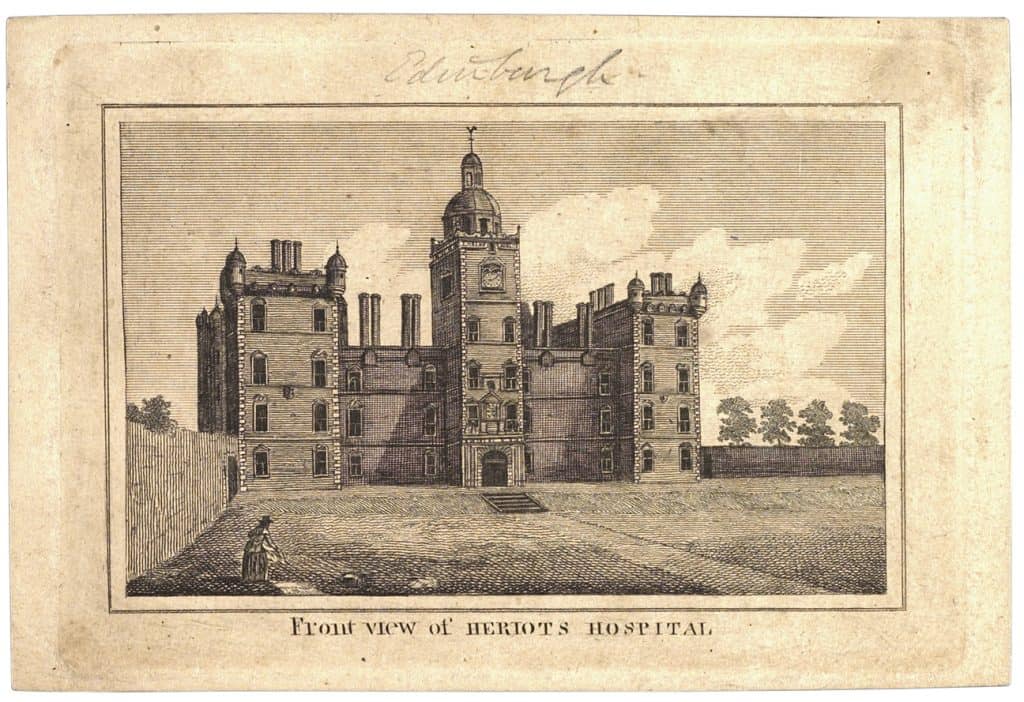 At the age of fourteen he was apprenticed by the governors of the hospital to an apothecary in Edinburgh. After that apprenticeship, he found similar employment in Glasgow. While there he learned how to make gelatin capsules. An 1861 Scotland census shows Dundas Dick living in Edinburgh with his mother Isabella Dick who was sixty years old. In 1864, he came to New York alone with dreams of a new life, capsules on his mind and I’m sure, his savings from Scotland.

Dundas next shows up in 1865 in New York City where he is selling capsules for Tape Worms. He was described as a slight-built, low-sized, delicate-looking man with a smooth face by one newspaper account. He was a life-long bachelor and and his only relative in the states was his brother. An 1866 IRS Tax Report notes a Dundas Dick, Manufacturer who is located at 547 Broome in New York City. He receives his U.S. naturalization papers in 1868. Here is an 1872 newspaper ad below saying how safe his Castor Oil soft capsules are. No taste, no smell, no Croton Oil and so pleasant that children ask for more!

His capsules would make him rather famous, wealthy and get him in trouble too. In 1873, there was a mysterious death of an Italian, Professor Domenico Minneill in New York. Dundas Dick was accused, after all, of putting Croton Oil in this Castor Oil capsules. Apparently the professor took the Dundas Dick & Co. pills that lead to his death. Read Full Account.

The Pharmaceutical Era reported in 1902, “It may be news to many druggists that Dundas Dick & Co. were the original makers of soft capsules in this country, having introduced them to the medical profession in 1865. It will not be news, however, to know that their Docuta Sandalwood capsules are being quite generally prescribed by physicians for diseases of the genito-urinary organs. There is good profit in selling these goods and those unacquainted should write to Dundas Dick & Co., 112 White street, New York, for their literature.”

Dundas Dick, in his chemical and manufacturing laboratory, would come up with all kinds of medicines and cures along with his Tape Worm Capulets such as Sandalwood Capsules, Castor Oil Capsules, Seidlitine Seidlitz Powders, Thermaline and eventually his Congress Bitters in 1879 or so. He brought capsules to America and invented and patented many machines for facilitating and producing capsules in a cheaper way.

His bitters were so popular, they would sell all the way up to 1908. I suspect the C 215 Congress Bitters amber square listed in Bitters Bottles might have been his first bottle while the C 216 amber rectangular bottles were his work horse. This bottle is rated scarce but they are out there. Is it the Congress Bitters bottle related to Dundas Dick? Probably so, but we will not know until a labeled example shows up.

The postal card below from the Joe Gourd collection certainly ties the Capitol trade-mark card to his card. Note that it says “Please send one doz. Congress Bitters, with the framed Show Card and Advertising matter…” The bottles analyzed in Kansas were 12 ounces so that also matches the bottle sizes noted in Ring and Ham. 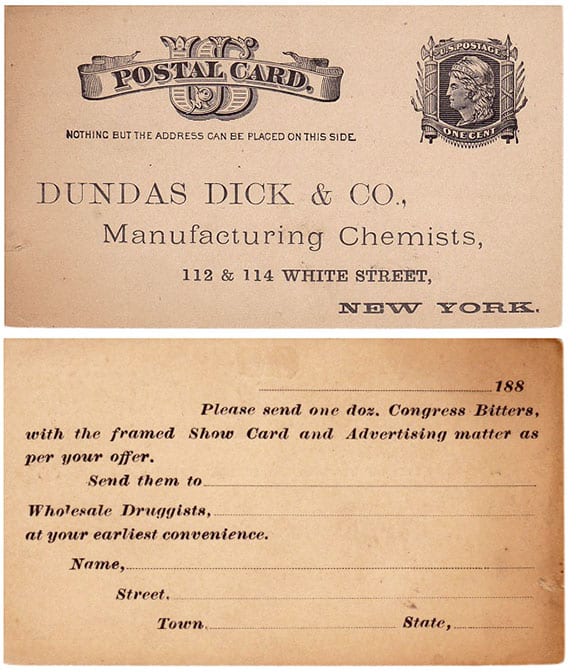 During his years in the patent medicine business, Dundas Dick made several fortunes which indicates that he lost the same in intervals. In the late 1880s, Dundas seemed to have been suffering from mental health issues. One report finds him arrested in 1887 for leaning against a lamp post and singing in a loud and inharmonious strains. When confronted, he said he had no home and he would do as he pleased. This sounds like onset dementia to me. His new partners at the time, James Hardie and Michael E. Finnigan, would bail him out at the local police station and take him to debtors quarters where he lived by himself with three nurses who were employed to care for him and see that the was not left alone, as he would often wander away or run off. A physician was also employed to give him the necessary medical attention. This help all cost money and it was said that his present wealth in 1887 was estimated at over $100,000 and that the had a nice income from property in New York City, Brooklyn and Flatbush.

Dundas Dick would die on April 1, 1893, on his birthday. He was 55 years old. His obituary said he died of paresis. 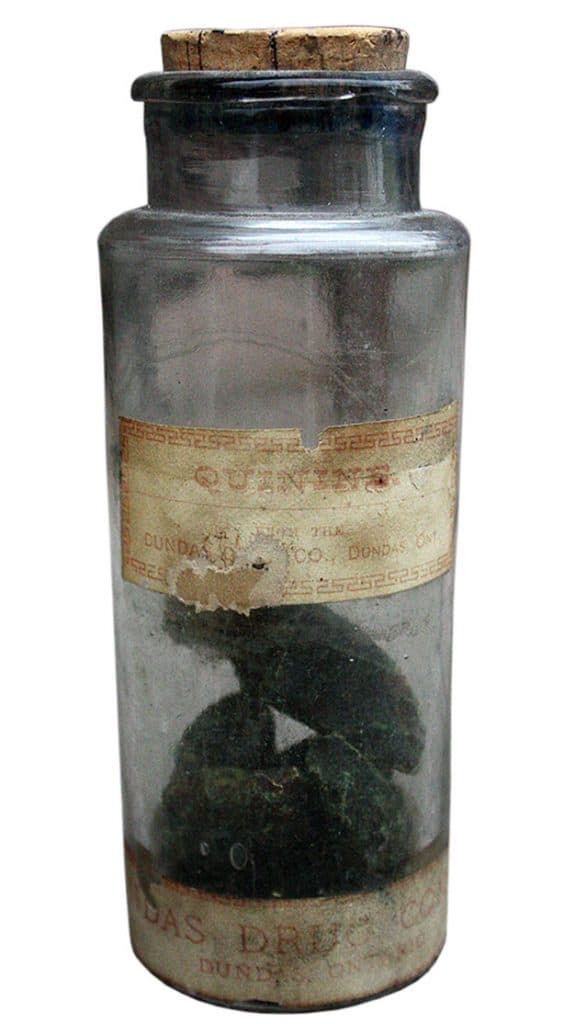 The Dundas Dick Co. would continue in business until 1906 or so followed by the Dundas Drug Co. until 1914. They were selling Quinine, 3-D Kidney Pills, Liver Pills and Stomach Pills at 502-4 Canal Street in New York City. The little bottle above contains Quinine with a Dundas Drug Co. label. That’s a 50 year run of the Dundas name in capsules, pills, medicines and the Congress Bitters, A Great American Tonic! 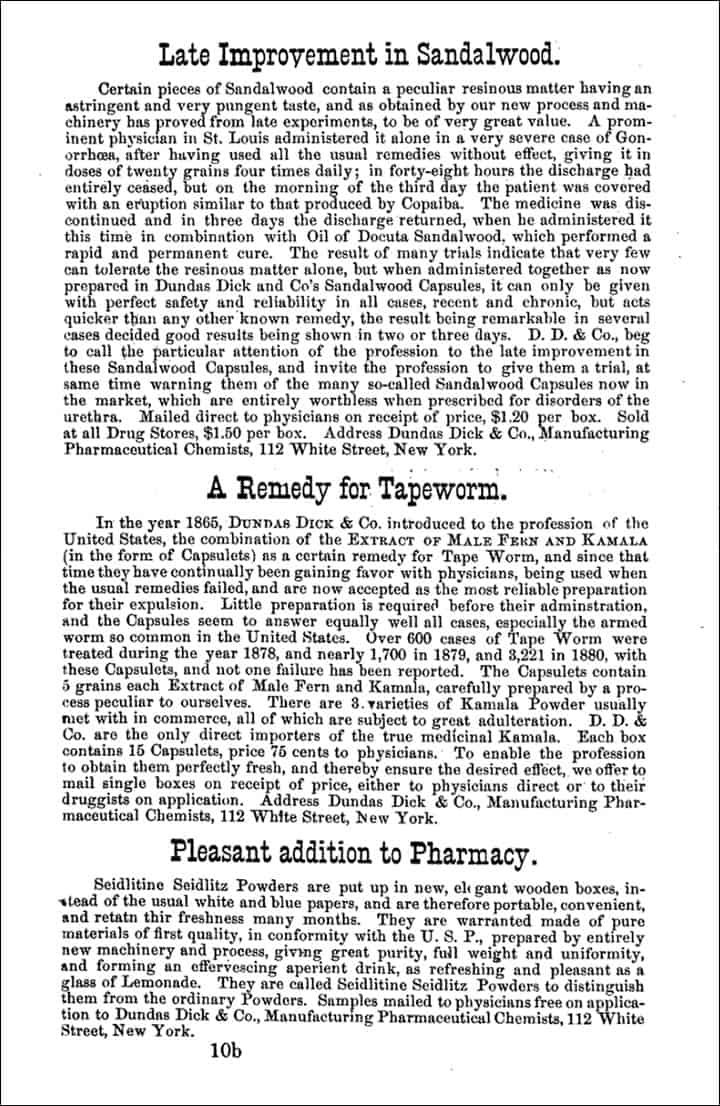 Dundus Dick & Co. were eventually listed in 1881 as manufacturing chemists located at 112 White Street in New York. The company and their products are represented nicely below. The select group of images are from an 1881 Dundas Dick & Company Thermaline Malaria Medicine booklet given out by druggist, J. F Schmidt from Patterson, New Jersey. 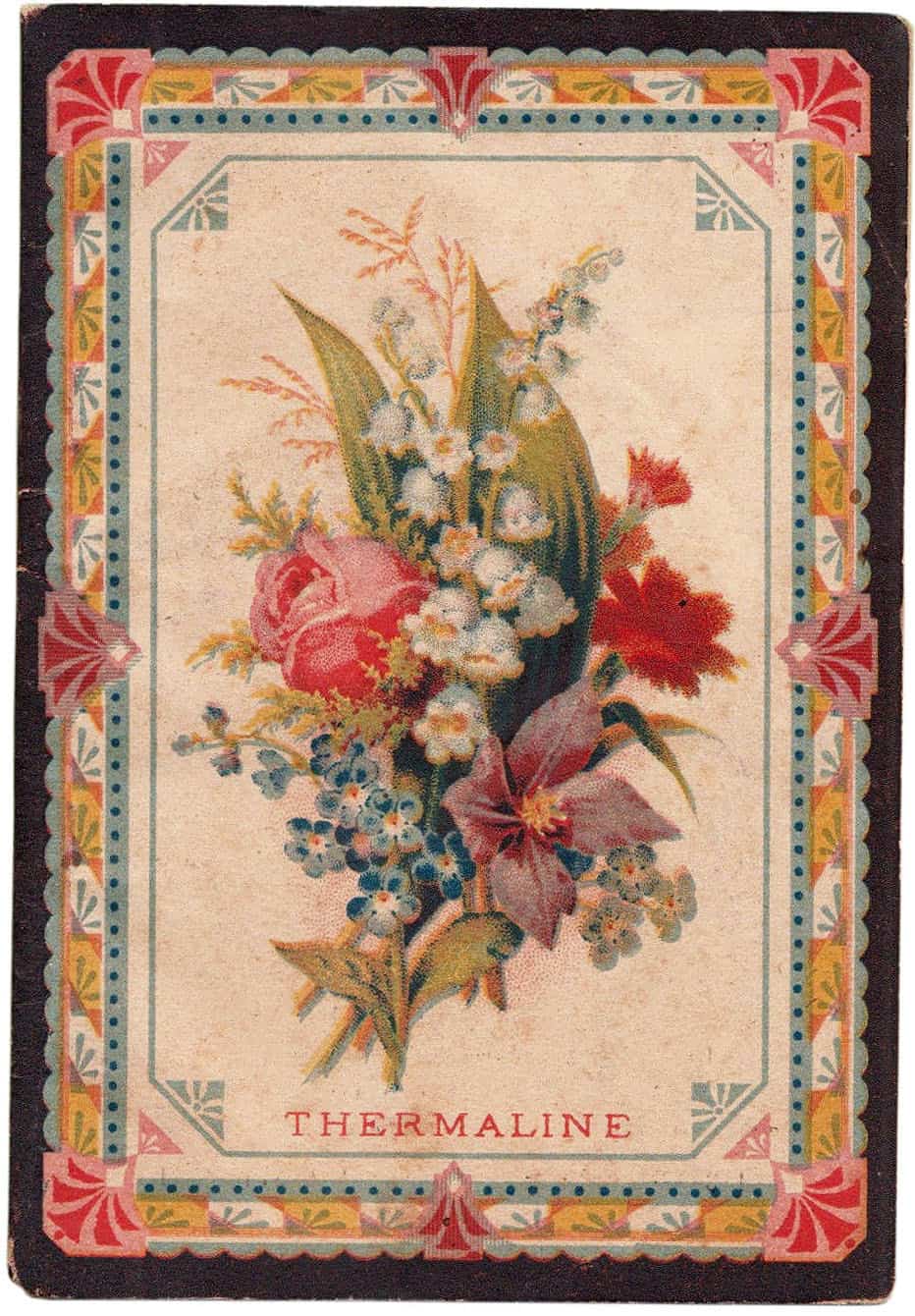 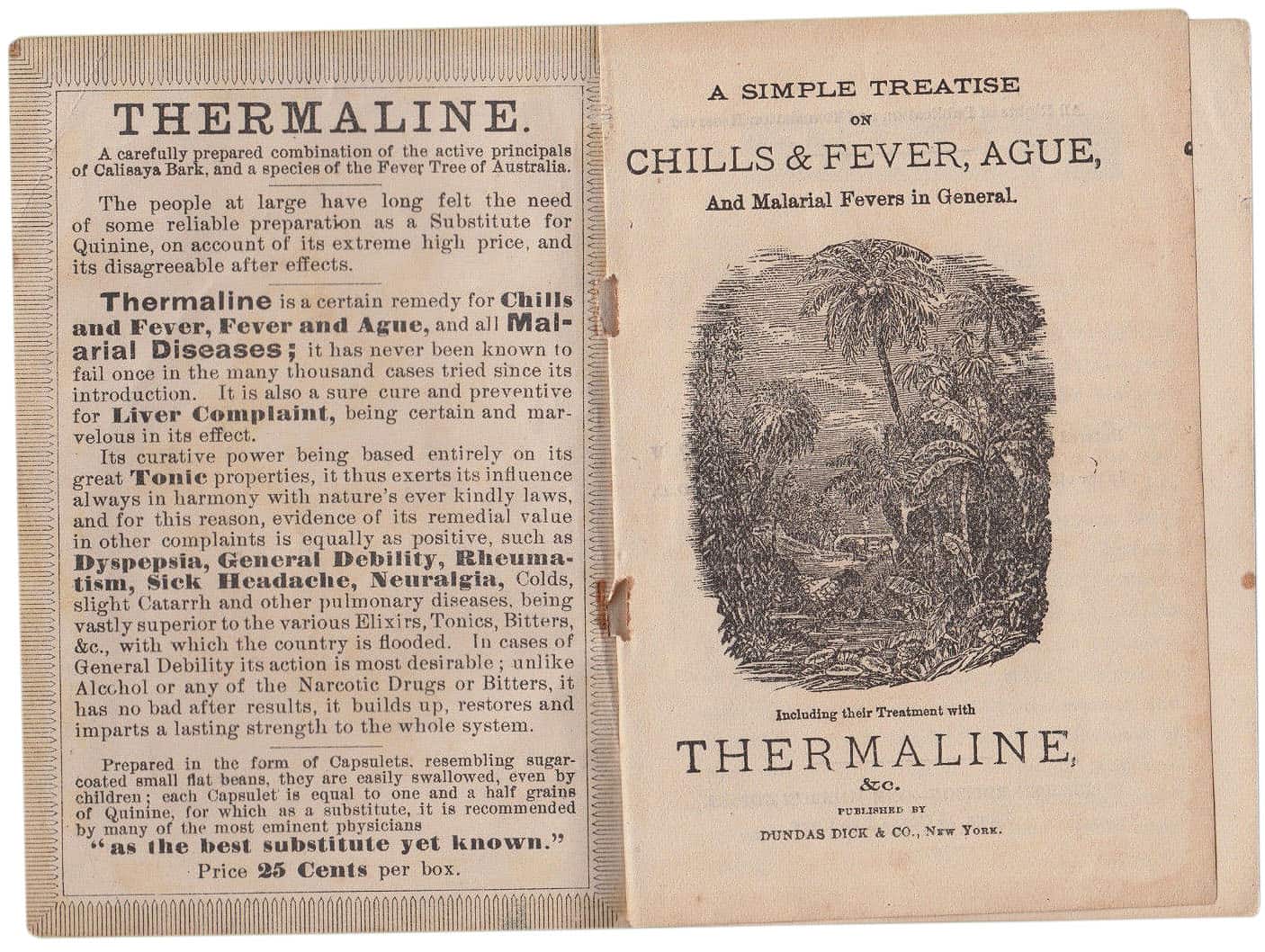 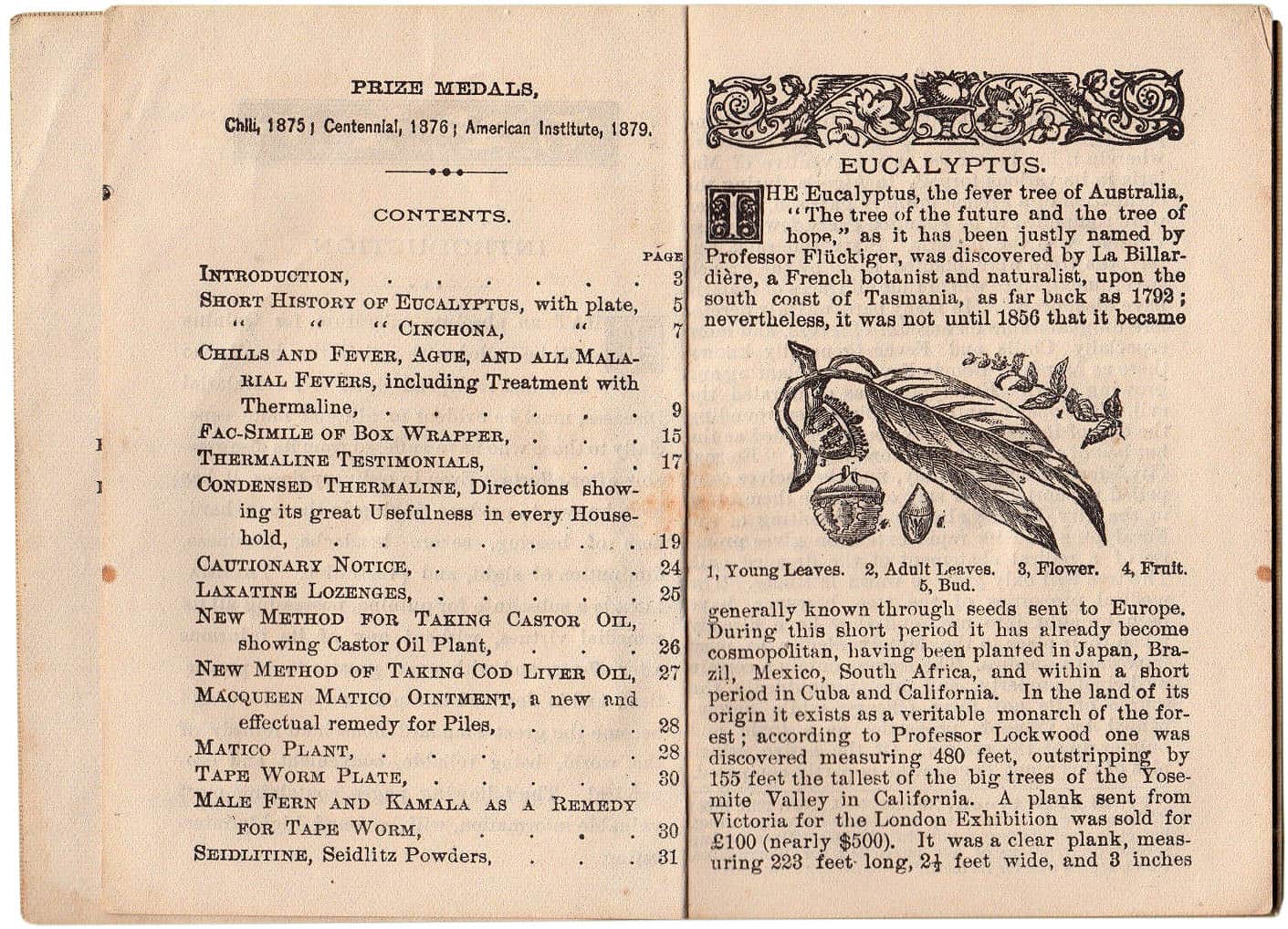 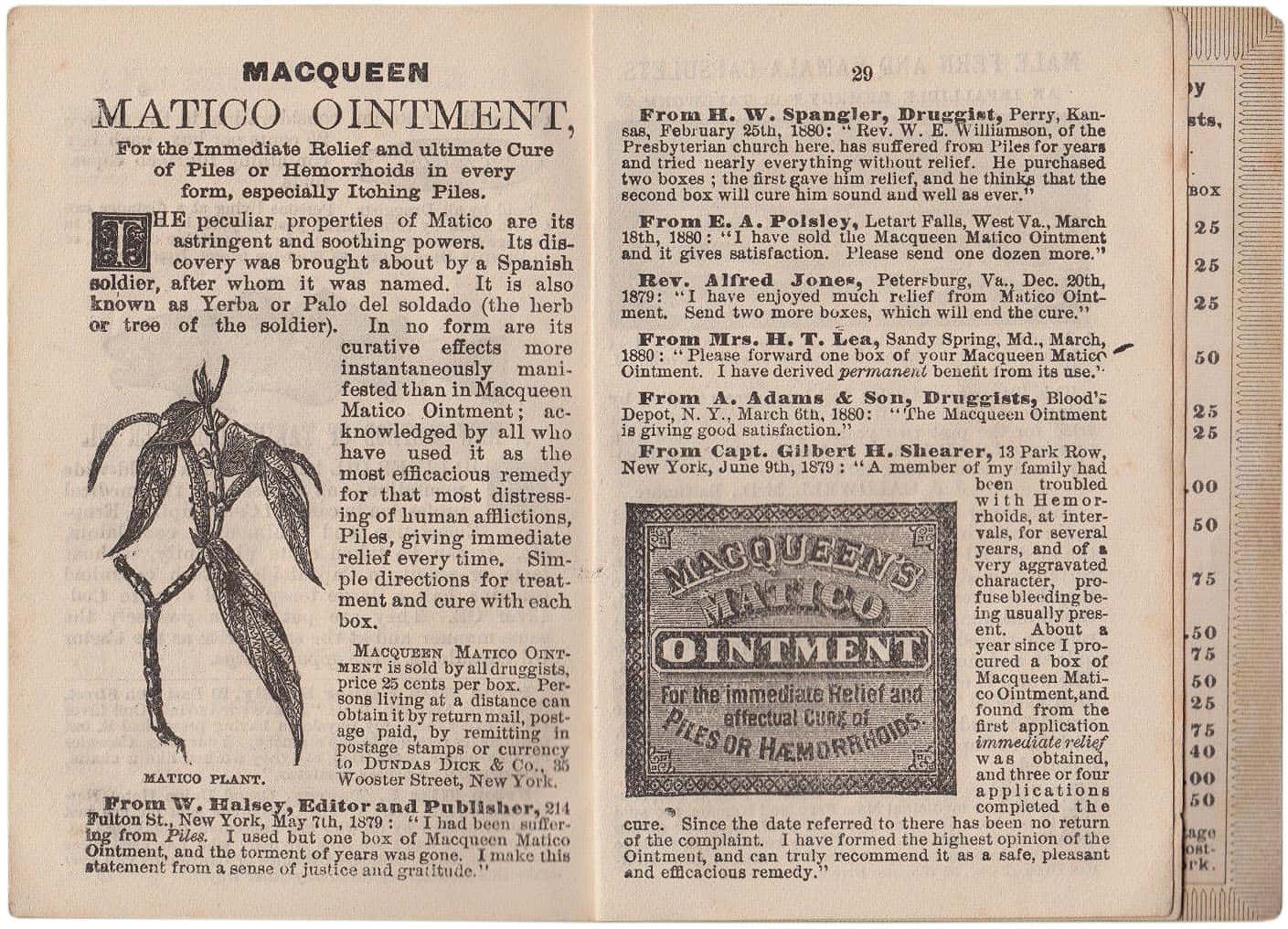 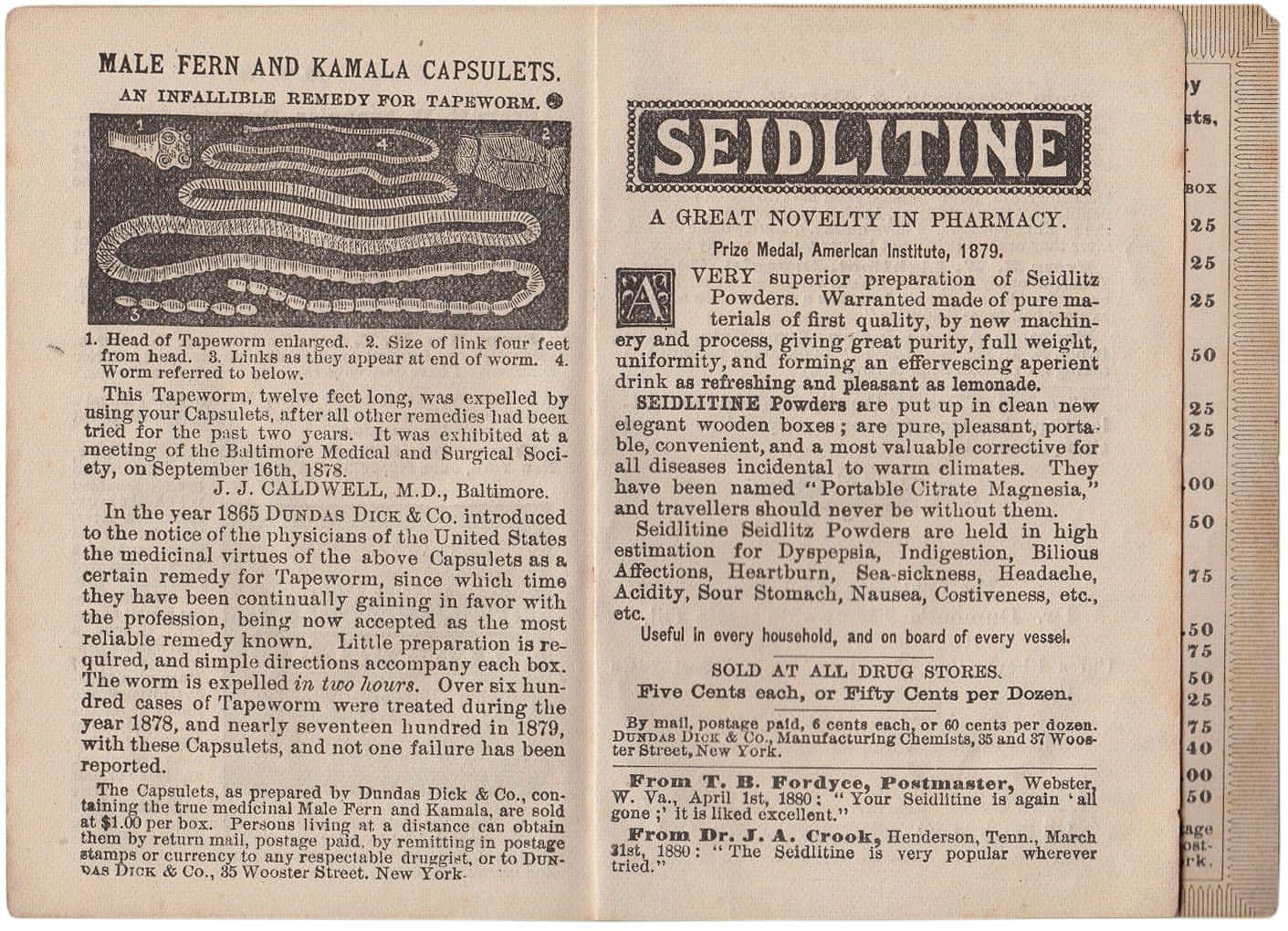 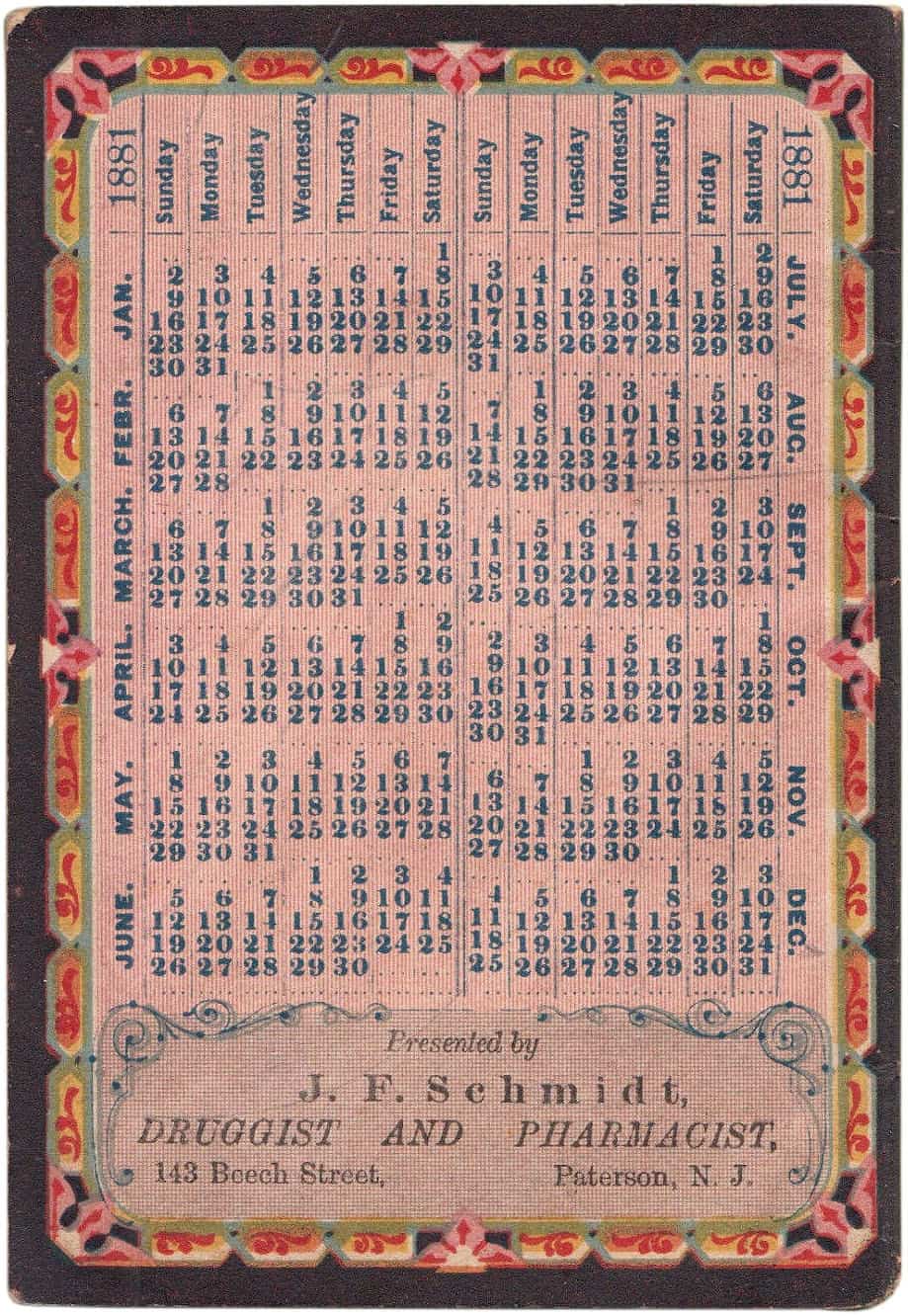 The following represent a select group of advertising trade cards. Most mention product names accompanied by eye-catching illustrations and many had handy annual calendars. 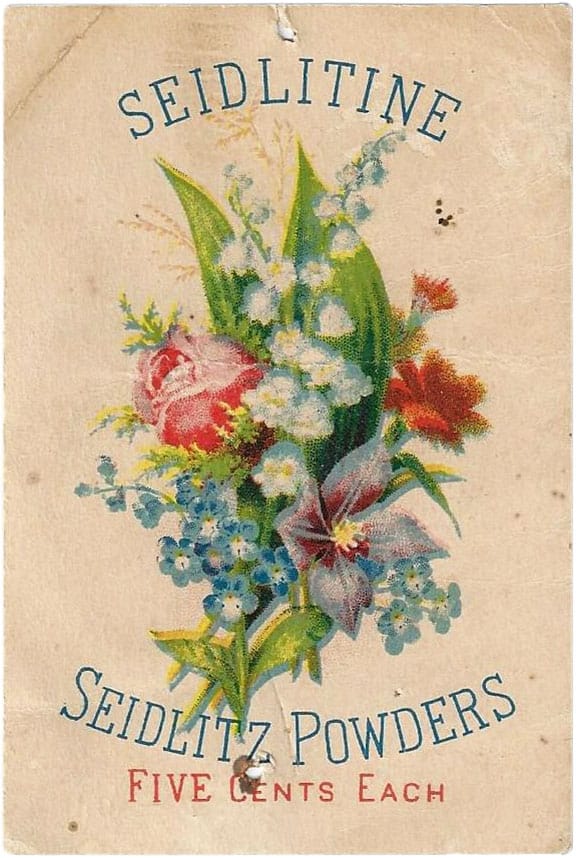 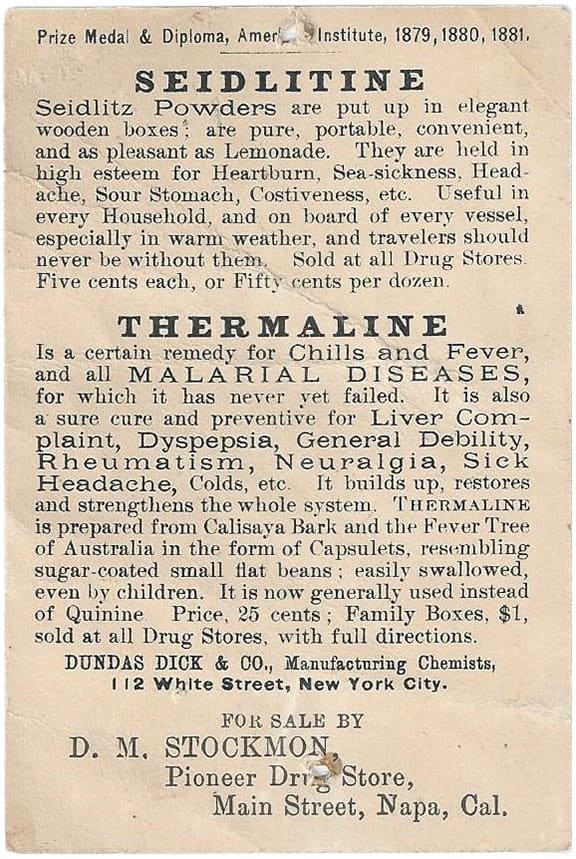 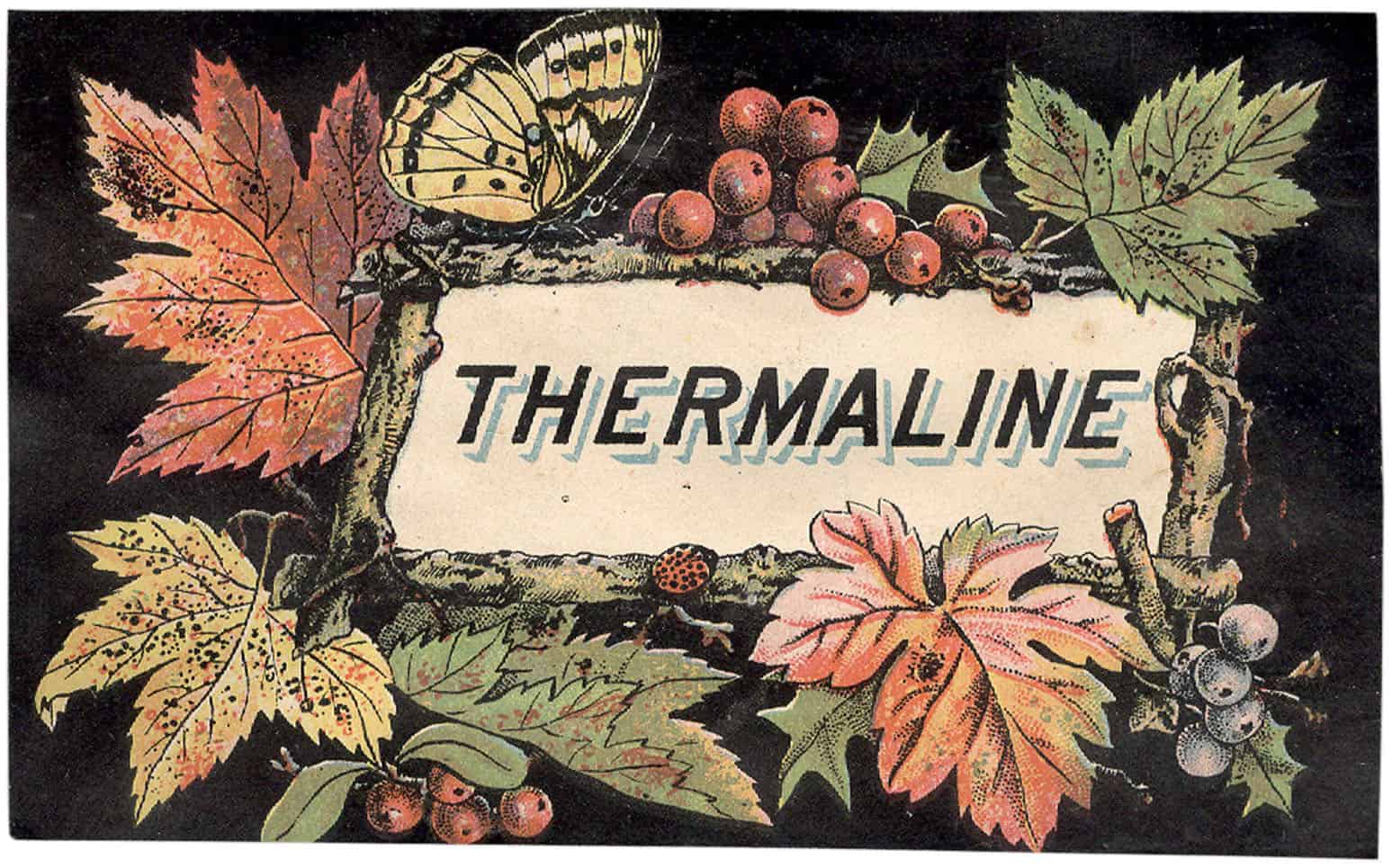 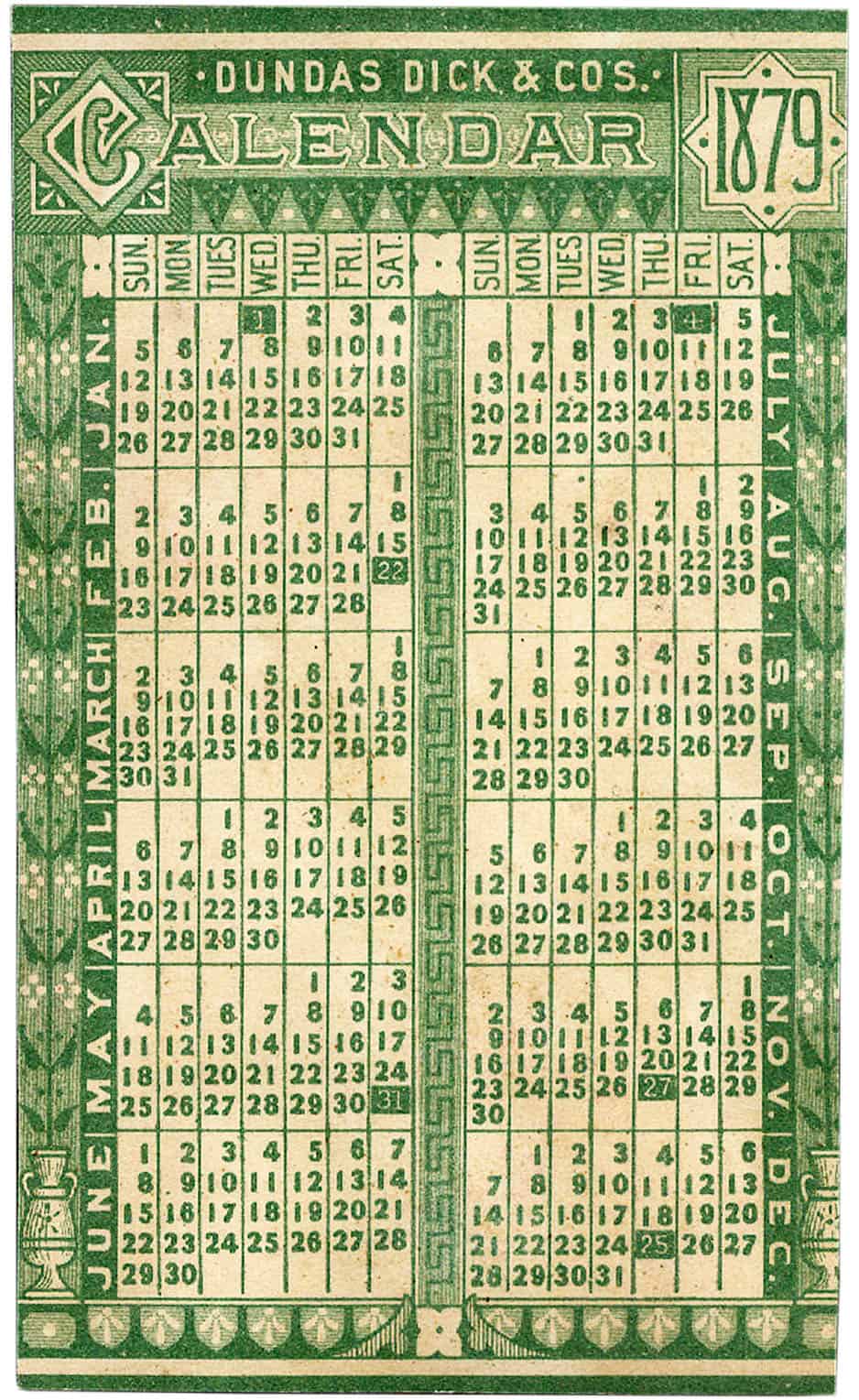 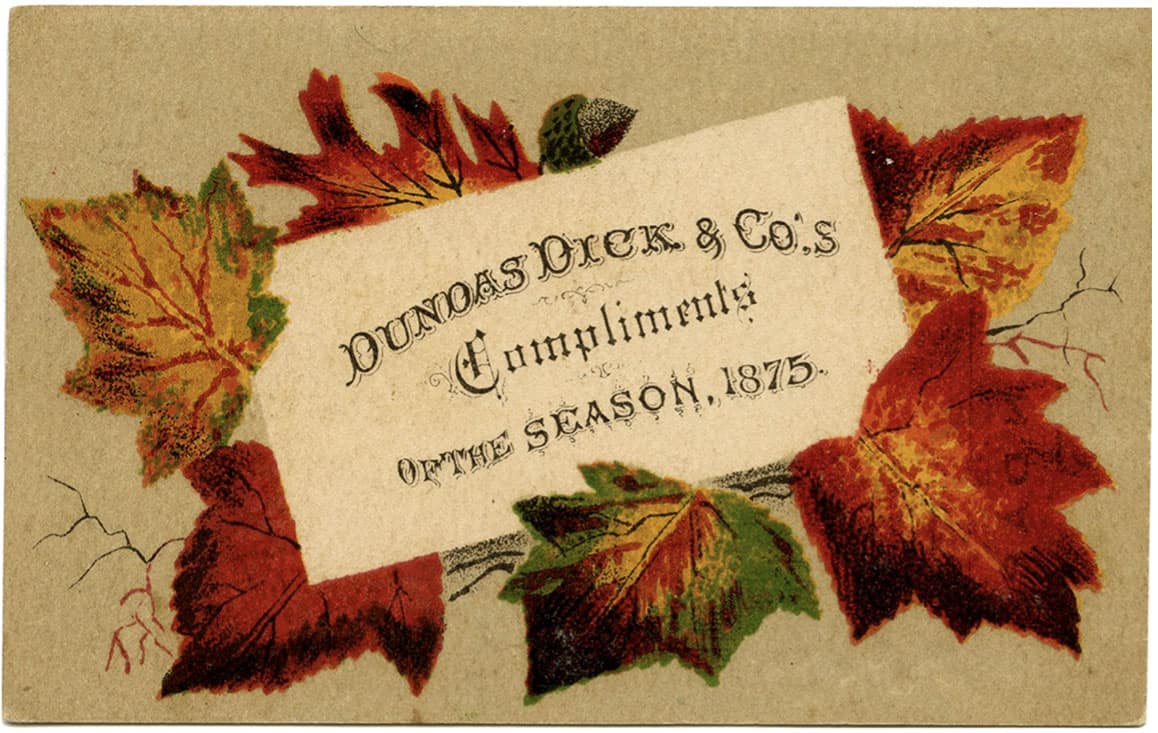 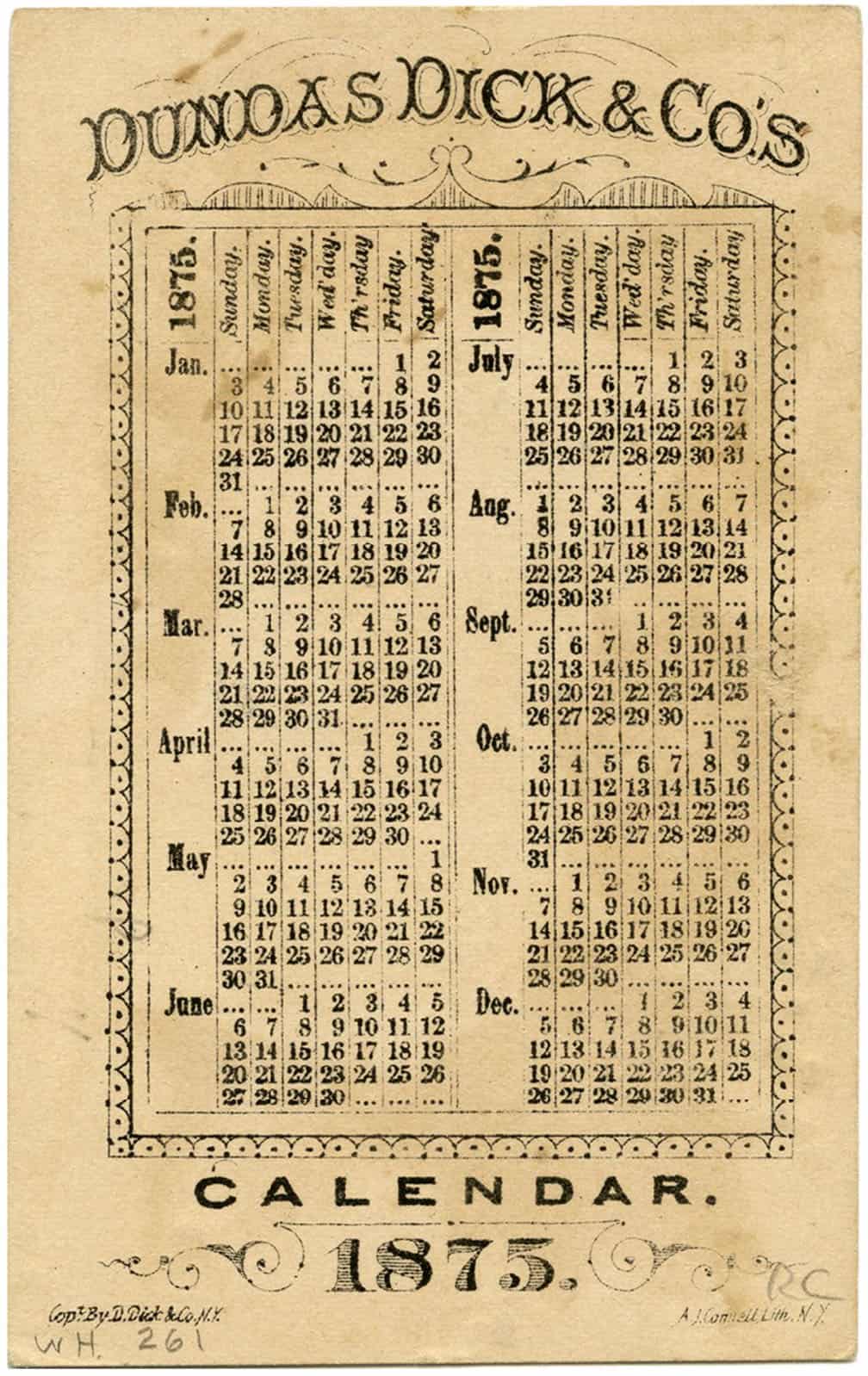 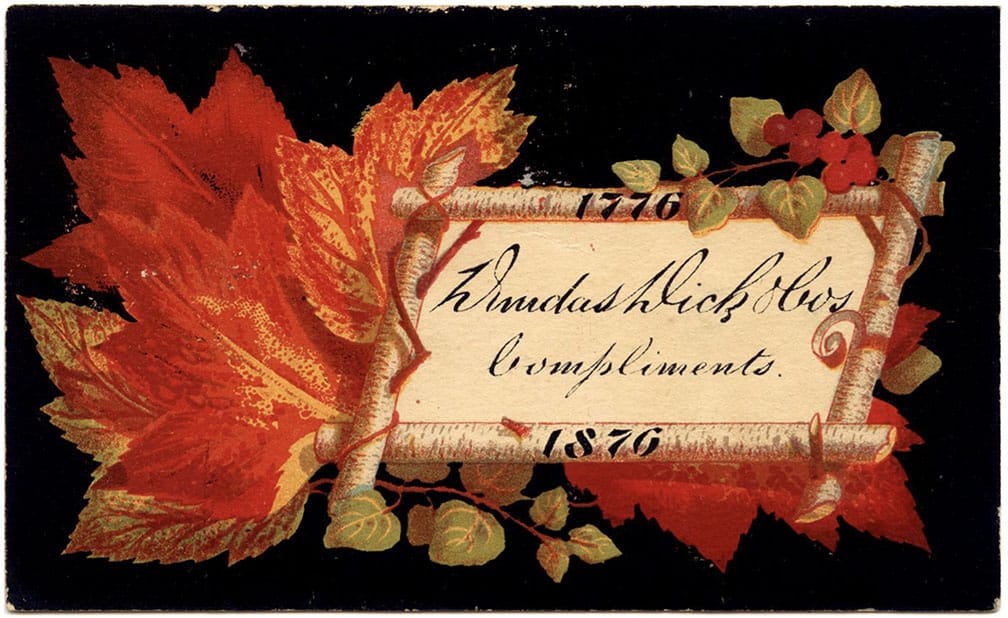 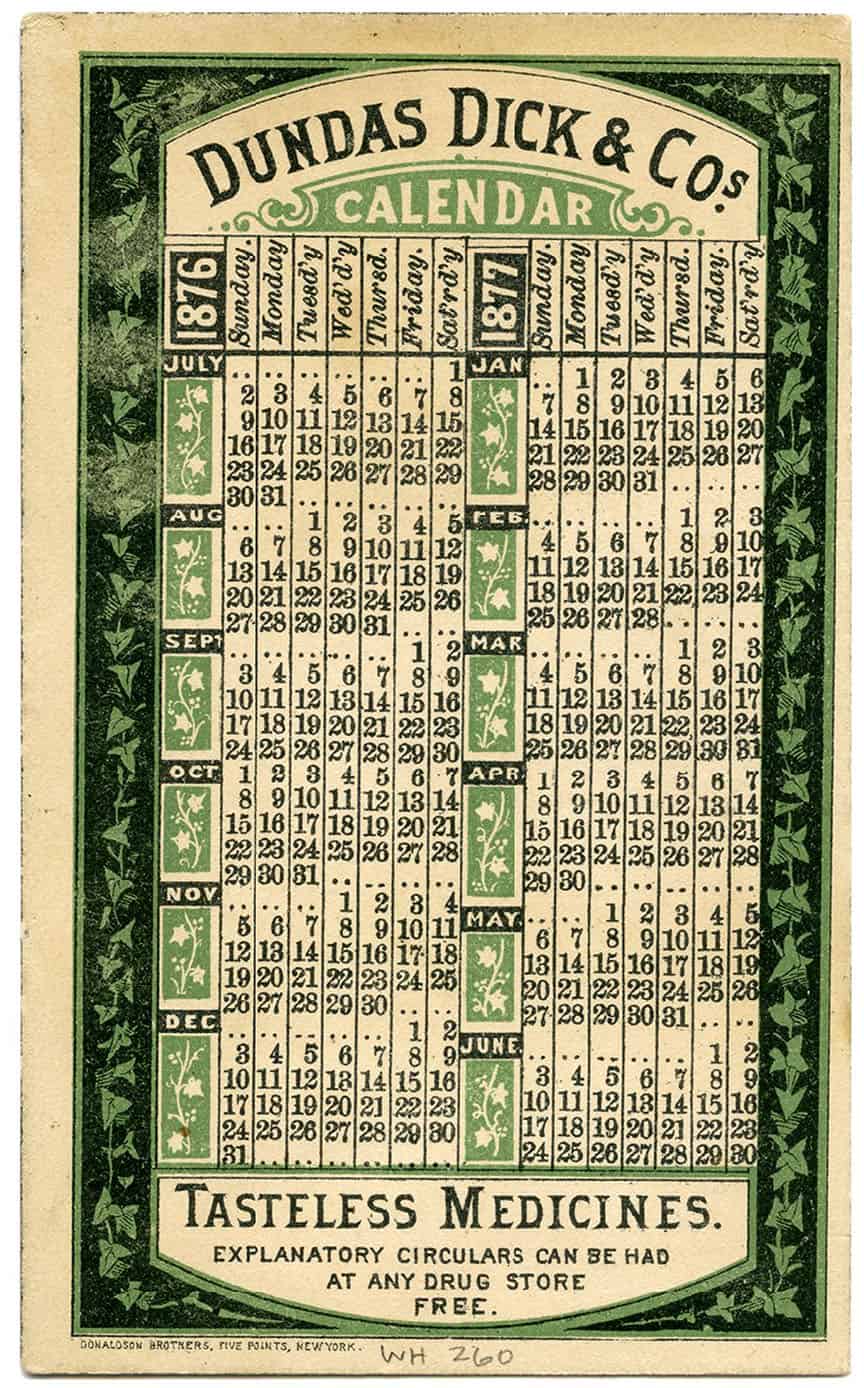 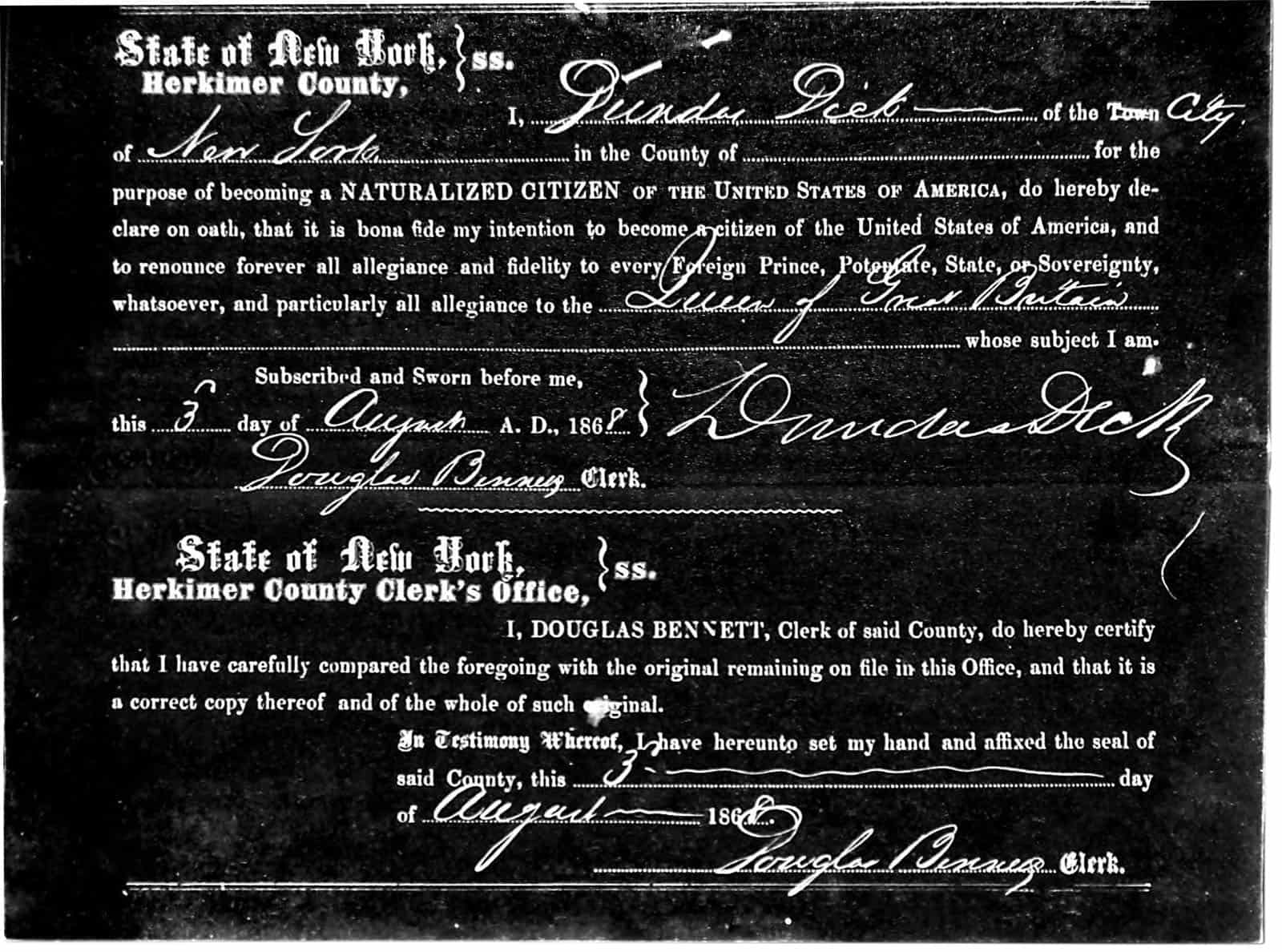 1873: Newspaper notice (below) The Mysterious Death of the Italian Prof. Domenico Minneill. Dundas Dick & Co. does not use croton oil – The Sun, Monday, February 17, 1873 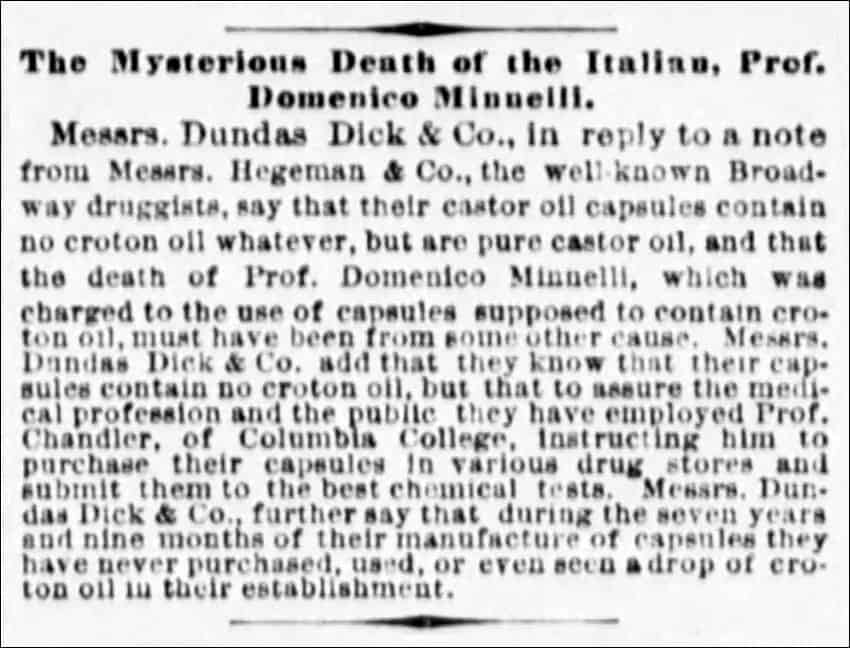 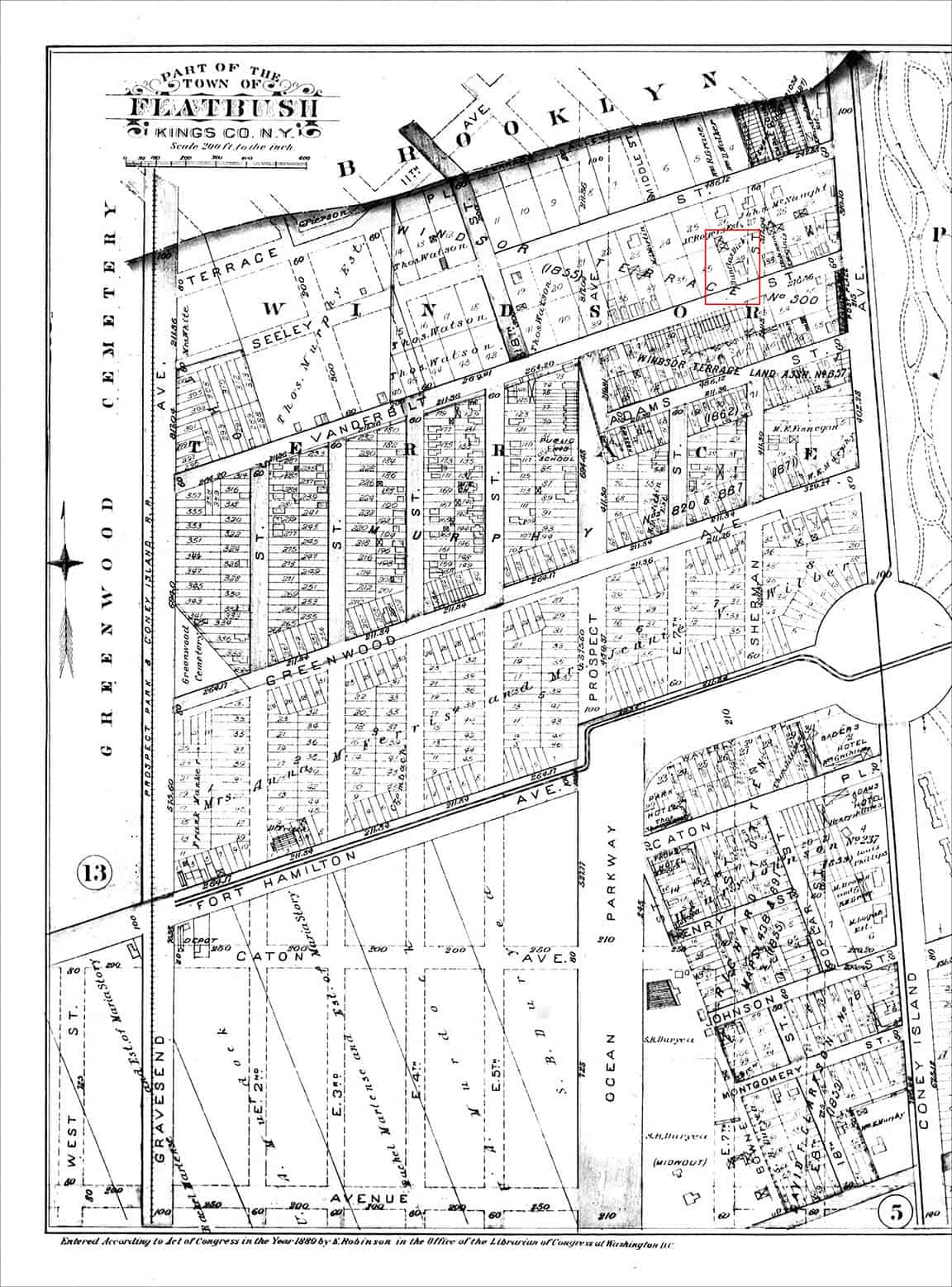 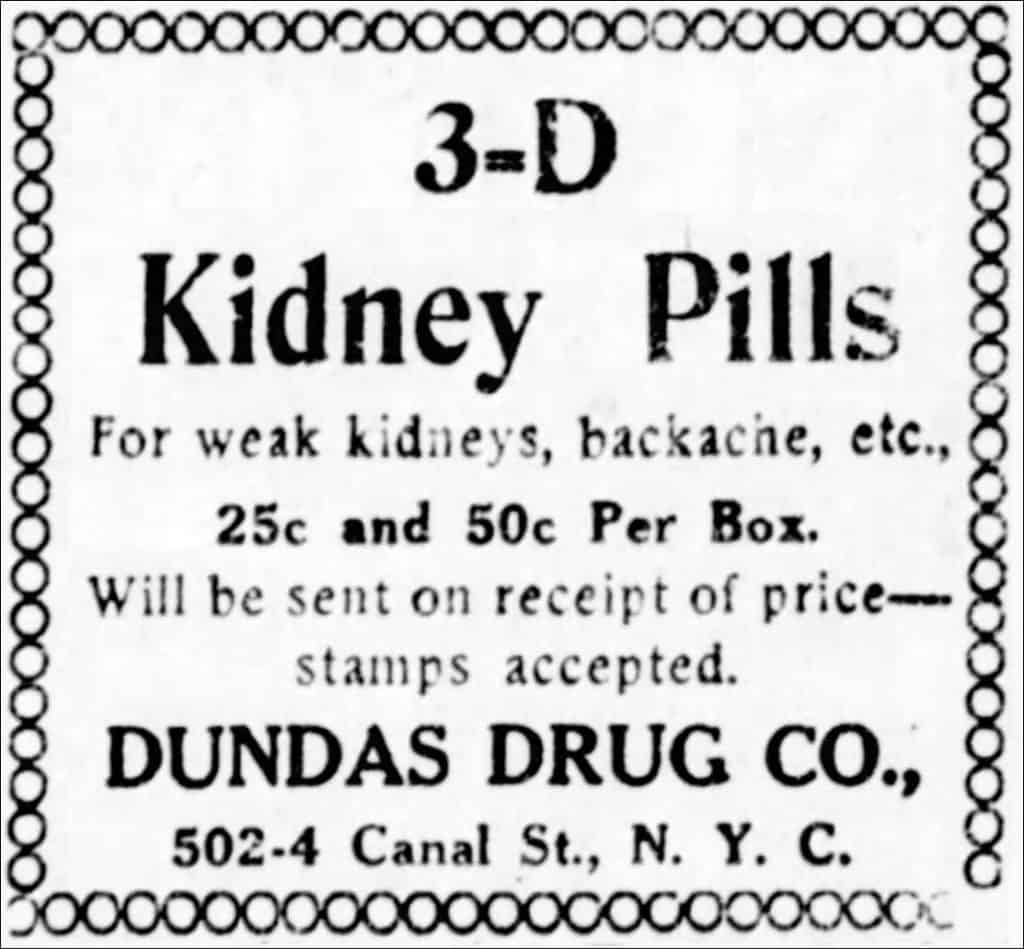