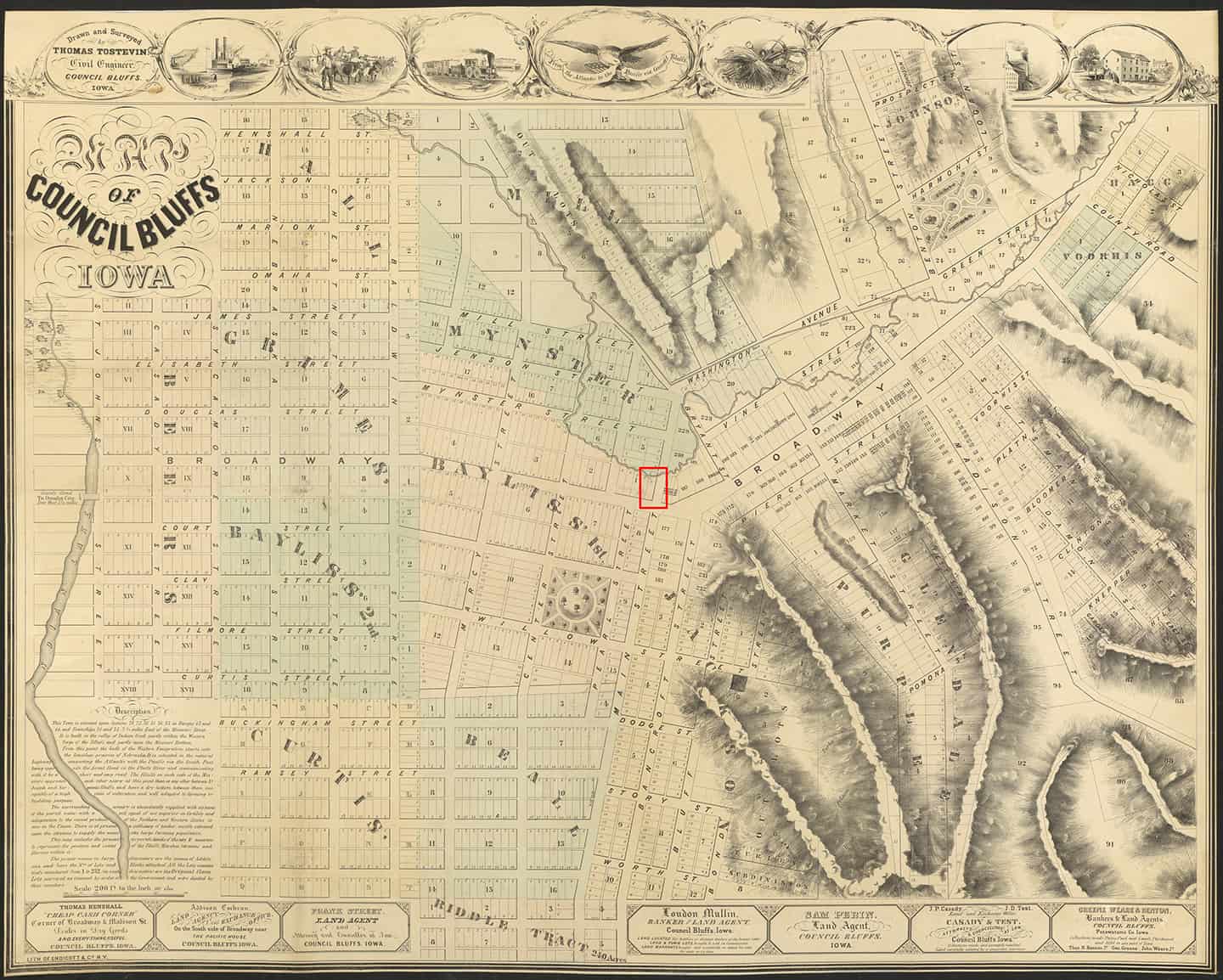 I recently received a couple of emails and newspaper clippings from Mark Wiseman, a experienced bottle collector from Iowa that included advertisements for unlisted bitters including Adler’s Celebrated Anti-Cholera Bitters and Dr. Smith’s Magic Bitters from Council Bluffs, Iowa. I knocked off the first two and am now looking at the 1867 advertisement below for Riddle, Fuller & Company who are noted as the Sole Agents in Council Bluffs for the sale of the Celebrated California Bitters. I was curious if this was a new unlisted bitters or reference to another known bitters.

Riddle & Company was founded by Samuel H. Riddle sometime around 1851. He took on S. Fuller as a partner and most of the Riddle, Fuller Co. advertising dates around 1867. The two were located on Palmer’s Block, on lower Broadway in Council Bluffs, Iowa. Julius Palmer worked as a butcher near Coatesville, Pennsylvania before he moved to Council Bluffs in 1854. He built the Palmer Block on the northwest corner of West Broadway and Sixth Street. The red box on the top map image indicates their location.

By 1868, Council Bluffs, on the eastern shore of the Missouri River and across the river from Omaha, Nebraska, was near the end of its era as the trail head and supply point for the Mormon Pioneer Trail and other westward routes. The Chicago & Northwestern Railroad began serving Council Bluffs in 1867. In 1869, the transcontinental railway opened and Council Bluffs was designated as a major railroad hub.

Samuel H. Riddle was born on July 9, 1820, in Hardin County, Kentucky, and at an early age engaged in mercantile pursuits. He was married in Nelson County, Kentucky, on October 25, 1842, to Rebecca Furman, sister of J. L. Furman, of Council Bluffs, by Rev. Smith Thomas, pastor of the Baptist Church at Coxes’ Creek.

In 1845, he moved with his faintly to Savannah, Missouri, where he resumed his retail pursuits. In 1851, he moved to Council Bluffs and continued the business of wholesale and retail liquor dealing under the firm name of Riddle & Co. and Riddle, Fuller & Co. for nearly a quarter of a century.

Riddle was called to the Bench taking his seat as Judge of the District Court, November 7, 1853. He retired from this position on the 7th of October, 1858. He was elected to represent Pottawattamie County in the Eighth General Assembly in 1860. Riddle would pass on in 1875.

Not much is known about his partner S. Fuller. 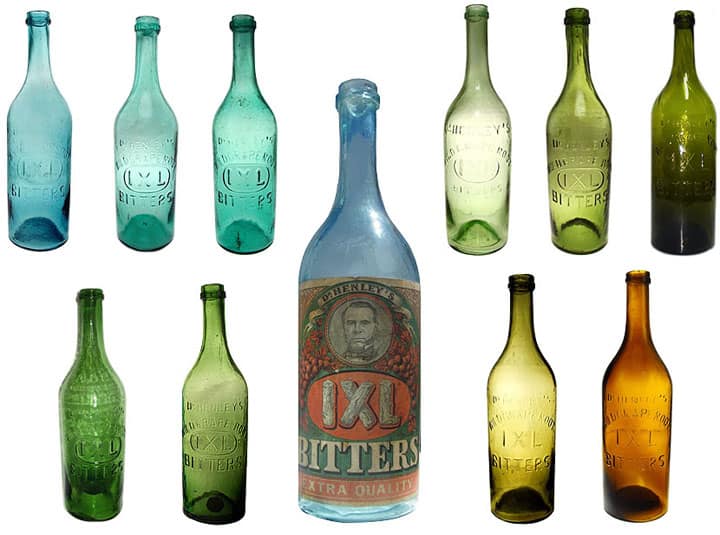 If we look west in this 1867 time period, we are probably talking about Dr. Henley’s Celebrated California IXL Bitters. This is most likely the bitters referenced in the ad. 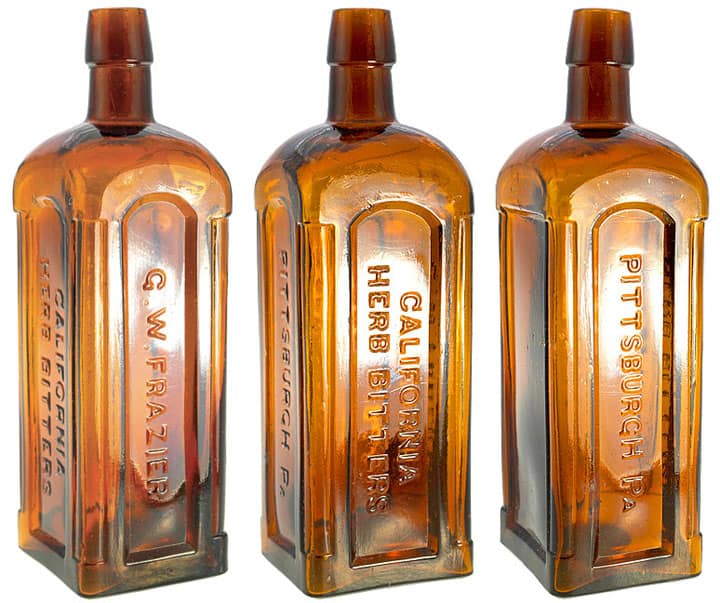 If we look east in this 1867 time period, we are probably talking about the California Herb Bitters from Pittsburgh, Pennsylvania. The advertising below actually calls it “The Celebrated California Bitters.” 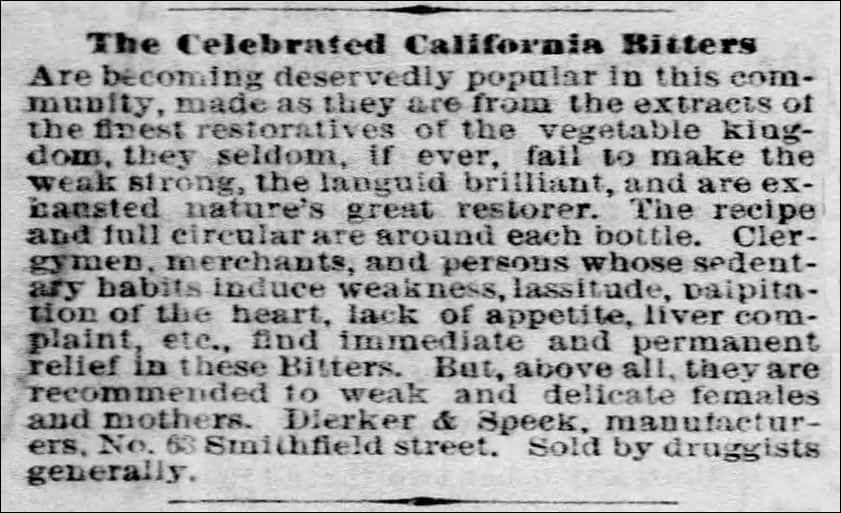 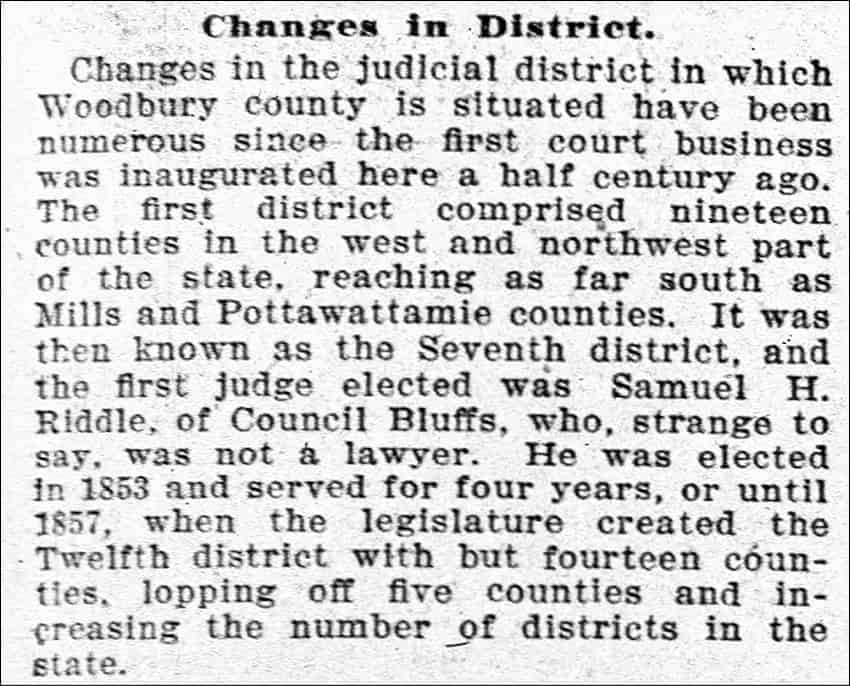 1868: Advertisement (below) for Riddle, Fuller & Co. – Turners’ Guide from the Lakes to the Rocky Mountains, Spalding & LaMontes, printers, 1868