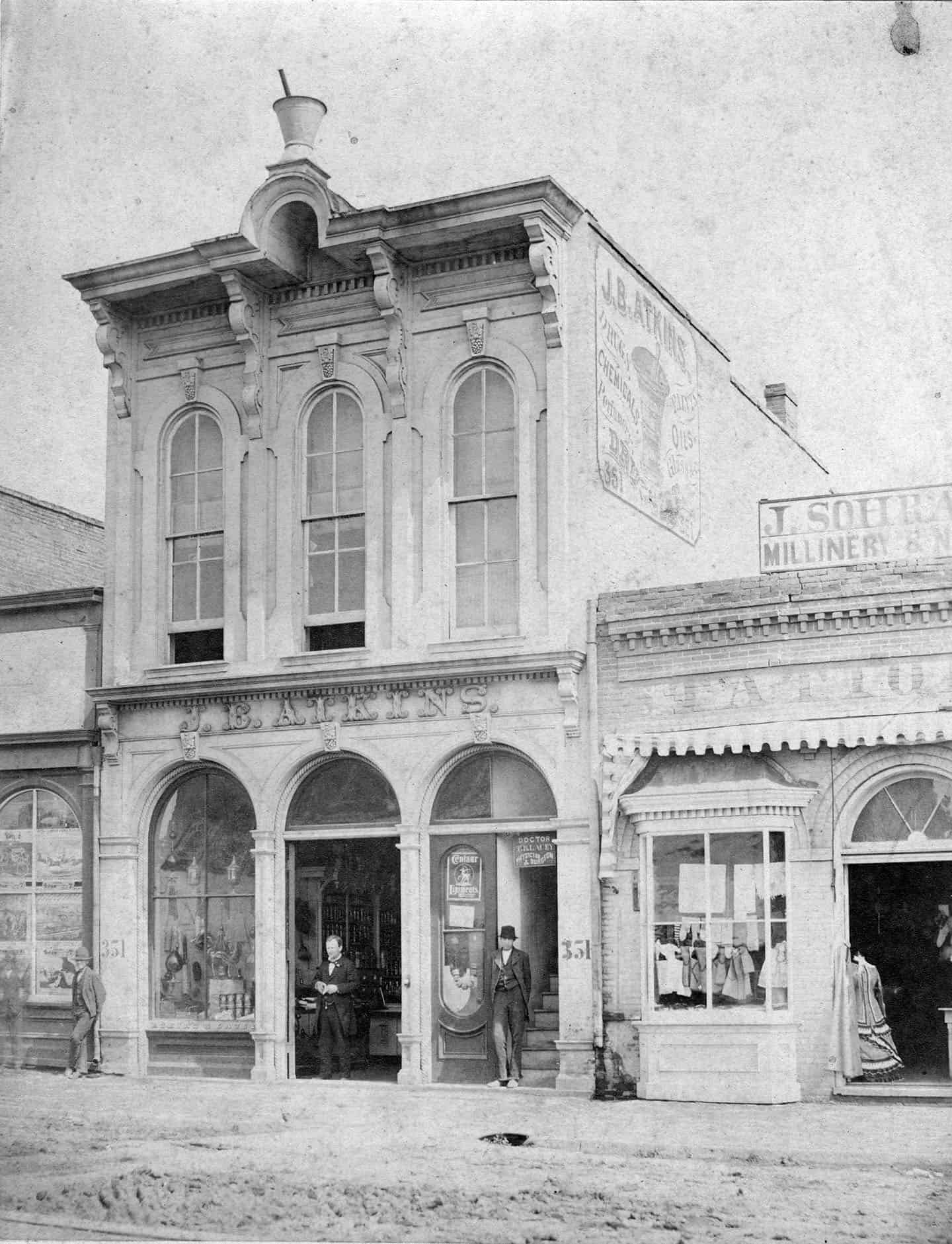 I recently received an email and newspaper clipping from Mark Wiseman about an unlisted Dr. Smith’s Magic Bitters. He found the ad below in The Council Bluffs Bugle dated October 17, 1867. 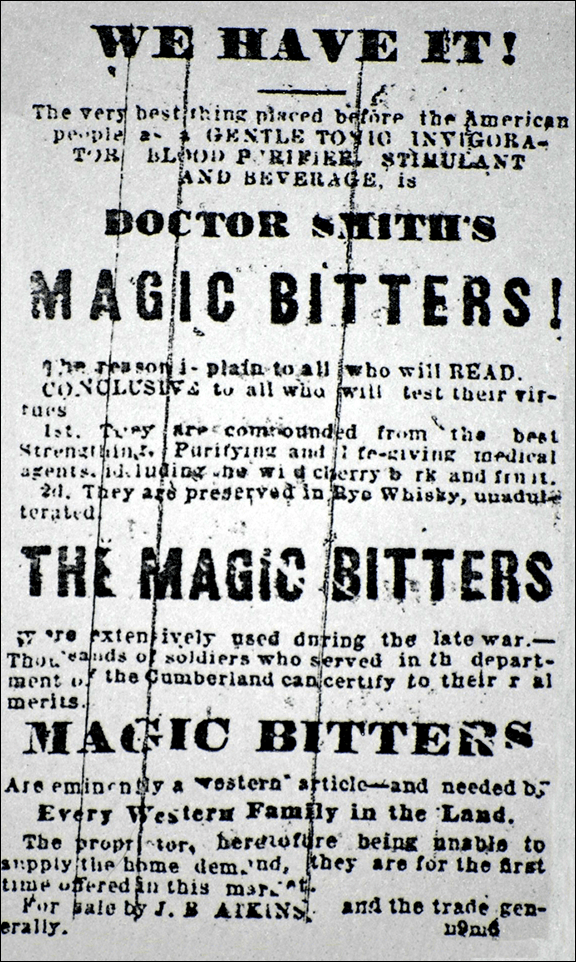 Described as eminently a western article and needed by “Every Western Family in the Land,” the bitters consisted of wild cherry bark, fruit and a healthy amount of rye whiskey. A gentle tonic invigorating for the blood and a beverage to be used as a stimulant. Yes, I bet it packed a punch.

S 125.7  DR. SMITH’s MAGIC BITTERS, For Sale by John Brown Atkins, Council Bluffs, Iowa
Council Bluffs Bugle, dated October 17, 1867
Dr. Smith’s Magic Bitters also called “The Magic Bitters” was reportedly used extensively during the Civil War by thousands of soldiers who served in the Department of the Cumberland. Dr. Smith was noted as being the proprietor which may be an advertising ploy by Atkins. 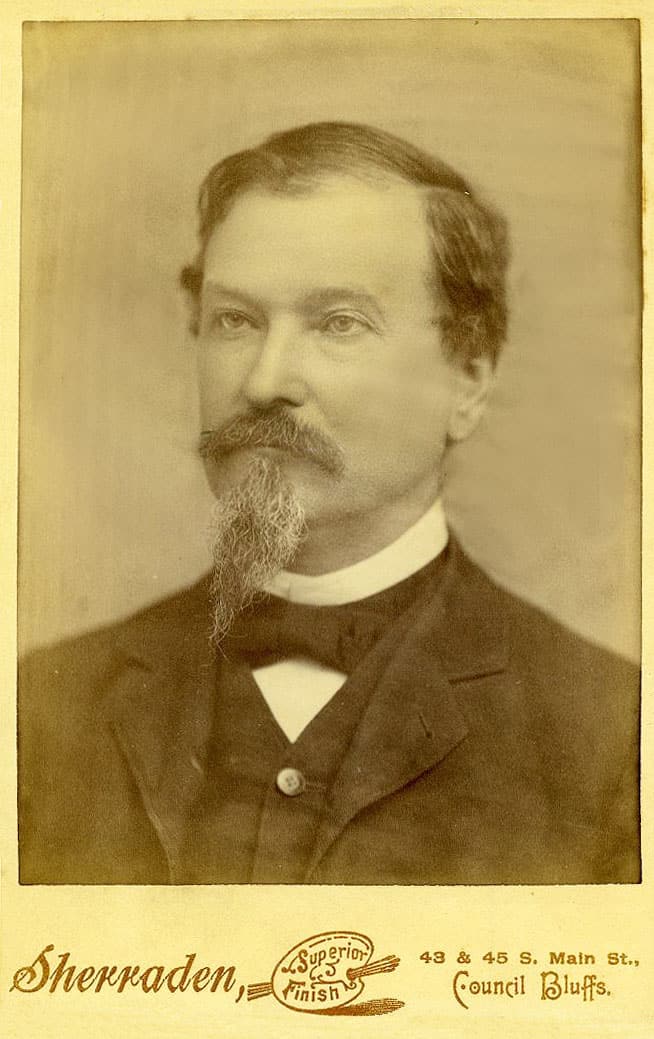 Dr. Smith and the J. B. Atkins Building

We do not really see who Dr. Smith is as he is noted as the proprietor of the Magic Bitters but the ad notes that because he can not keep up with the demand for the bitters, that it is now being offered for the first time by J. B. Adkins, a druggist by trade, in Council Bluffs, Iowa. He is pictured above in the studio shot. It must have been a short run as I am not aware of any bottles either embossed or labeled.

I like the photograph at the top of the post showing the two-story building with the J. B. ATKINS bas-relief letters on the front facade. If you look closely, you will see that John Brown Atkins is standing proudly in the doorway and his windows and shelves within are fully stocked. I also see a camel and rider sitting on a box. Look at the roof, as there is a cool sculptural mortar and pestle on top of the building and painted graphics on the side advertising J. B. Atkins selling Drugs, Chemicals, Perfumery, Paints, Oils, Glassware etc. His address is 351 West Broadway. You can see the numbers on a column on the left side of the building. 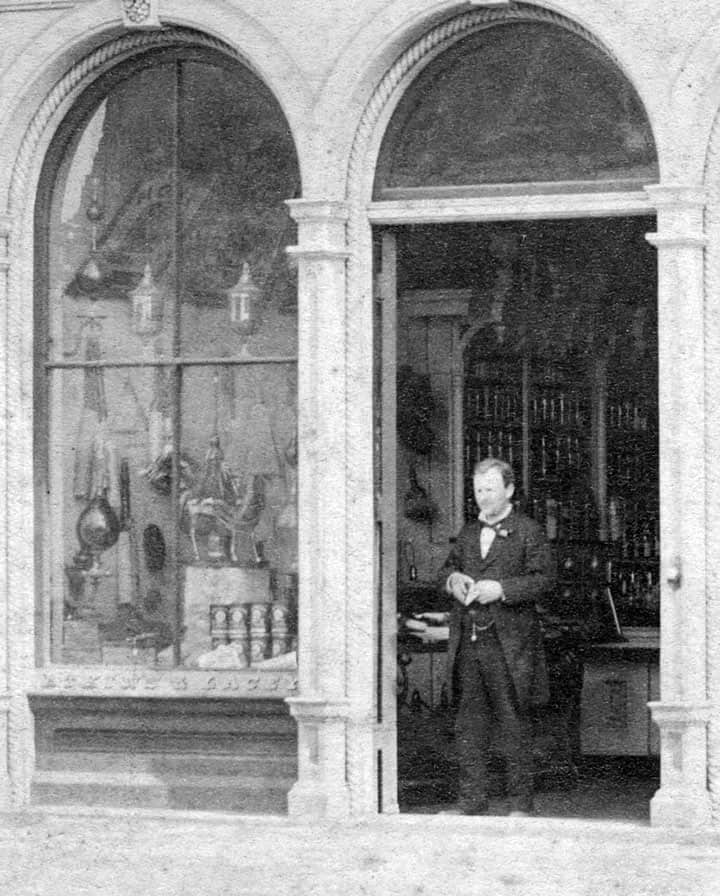 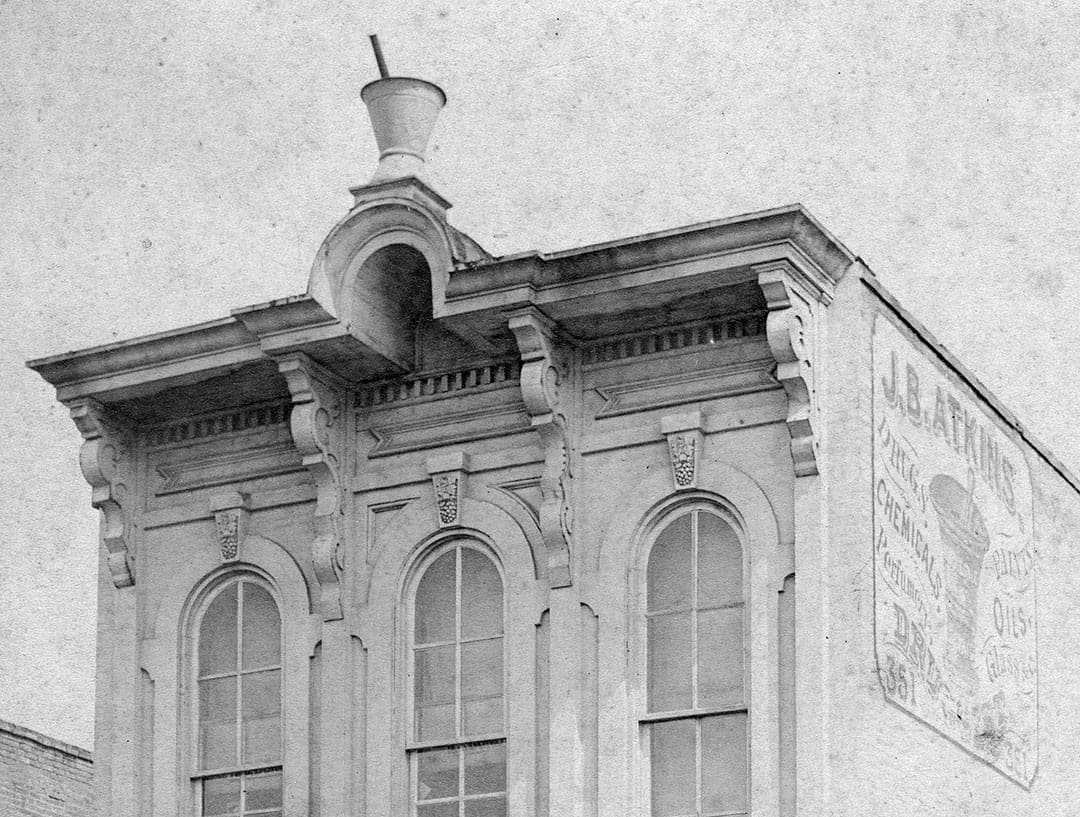 It looks like the second story had a separate front entrance with stairs for his son-in-law, Doctor Thomas B. Lacey, Physician and Surgeon. His daughter Mollie had married Dr. Lacey in 1878. Two years later they had a son, Thomas Jr. You can see his sign and probably Lacey standing in the doorway. I wonder if this is really our Dr. Smith? Two windows are partially open, so with the dust, I hope he didn’t do his surgery upstairs. 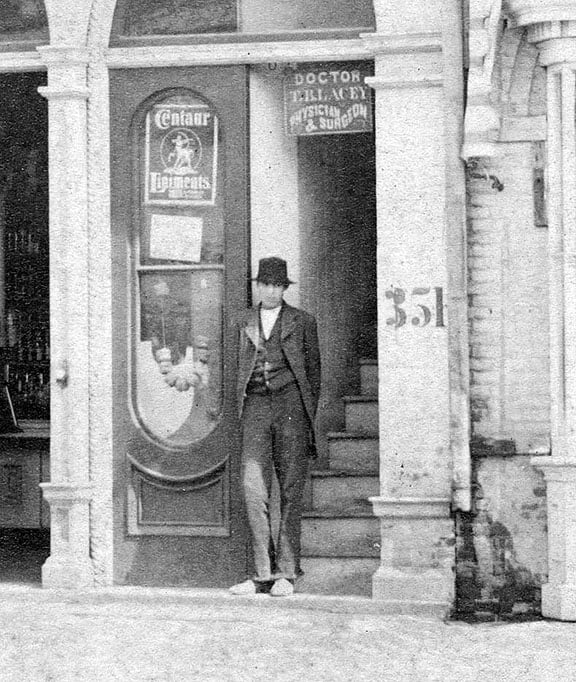 Dr. THOMAS B. LACEY, a thirty-third degree Mason and while active one of the most prominent physicians in this section of the state of Iowa, holding the chair of surgery in the Creighton Medical Institute, died at his home 540 Sixth Avenue. Dr. lacey was one of a family of physicians. His father and his grandfather were physicians and his son Thomas Lacey, has followed in the same profession. In addition to being a thirty-third degree Mason, deceased was past grand commander of the Knights Templars of Iowa and past grand high priest of Royal Arch masons. He was also a prominent member and past exalted ruler of the Council Bluffs Lodge of Elks.

Five years ago he was forced to relinquish his practice and has since been an invalid, gradually losing ground. He is survived by his son Dr. Thomas Lacey and his brother Charles Lacey of Chicago, who was with him at the time of his death. He had been in the city for thirty-one years and at the time of his death was 55 years of age. The funeral will take place from the residence Wednesday afternoon.

We first see J. B. Atkins in 1856 listed in a Michigan business directory as a partner with William Conger, the concern named Conger & Atkins, Druggists & Grocers.

In 1861, Atkins was commissioned as an officer in Company B, New Mexico 1st Infantry Regiment. He mustered out on May 1, 1862. After the war, John B. Atkins came to Council Bluffs in the summer of 1866 after a varied experience in the western and southwestern territories and on the Pacific coast. He opened a drug store in a small wooden building, which he erected for the purpose near the site of the building he subsequently built and occupied continuously with his drug store for nearly forty years.

In 1903, his health started to fail, so in August of that year he sold his business to Robert E. Anderson. Hoping to aid his health, John, his wife Lydia, and the rest of the family traveled to Los Angeles in October of 1903 in the hopes that under the genial influence of the tropical climate he might regain his wasted strength. Unfortunately John only lasted a few months in California and passed away December 5, 1903. His body was held in Los Angeles until February 1904 when he was returned to Council Bluffs for burial. John Atkins was a life long Mason and he was prominent in Masonic organizations in Iowa.

A telegram from Col. J.J. Steadman to The Nonpareil last night announced that J.B. ATKINS died at Los Angeles, California. J.B. Atkins was a citizen of Council Bluffs for nearly forty years. He located here in the summer of 1866, after a varied experience in the western and southwestern territories and on the Pacific coast. He was born near Detroit, Michigan, 65 years ago. When he came to Council Bluffs he opened a drug store in a small wooden building, which he erected for the purpose near the site of the brick building he subsequently built and occupied continuously with his drug store until August 19 of this year when he retired from business.

It is believed that the body of Mr. Atkins will be brought here for interment in Fairview, where he had often expressed the desire to take his final sleep. It is understood to have been his wish that in case of his death during the winter the family should remain in California until spring, placing his body in a vault at Los Angeles until they were ready to return. At the present time it is believed that his wishes in this respect will be carried out. With Mr. Atkins at the time of his death were his wife, his son Henry, and his grandson, Thomas B. Lacey, Jr., and Dr. T.B. Lacey.

1903: Notice of the death of the Eminent Grand Treasurer of the Grand Commander of Iowa, Sir John B. Atkins – Freemasons, Grand Lodge of Iowa Bulletin, 1902

The Grand Commander of Iowa has issued a memorial notice of the death of the Kminent Grand Treasurer of the Grand Commandery of Iowa, Sir John B. Atkins, whose death occurred December 5th, 1903, at Los Angeles, whither his family had taken him in the hopes that under the genial influence of the tropical clime he might regain his wasted strength. Those of our readers who recall meeting him at Templar Park on the shores of Spirit Lake the past summer will not be surprised for few thought they would ever see him attain at that spot of so many hallowed associations, so feeble was he in health at that time, and so it has turned out. His tired, worn out body after an eventful life, has been laid in the vault to await transportation in the spring to his old home in Council Bluffs when the family return and at which time the funeral service will be conducted by the officers of the Grand Commandery. He was a useful and active citizen and served his city as he had served his Masonic bodies, faithfully and well. John B. Atkins received the symbolic degrees of Freemasonry at Fort Union, New Mexico; and his Chapter and Commandery degrees in Council Bluffs. He was an active and enthusiastic member of Bluff City Lodge, No. 71; Star Chapter, No. 47, and Ivanhoe Commandery. No. 17, and had served each body as its presiding officer. He had been seven times in succession elected as Eminent Grand Treasurer of the Grand Commandery, Knights Templar, of Iowa, his first election being in 1897. He was also Treasurer of the Grand Chapter Charity Fund. His accounts and official acts show the utmost integrity and painstaking, and prove the honesty and trustworthiness of the man. Thus another of Iowa’s pioneers, a man loved and respected by all who knew him, has passed to his final reward.