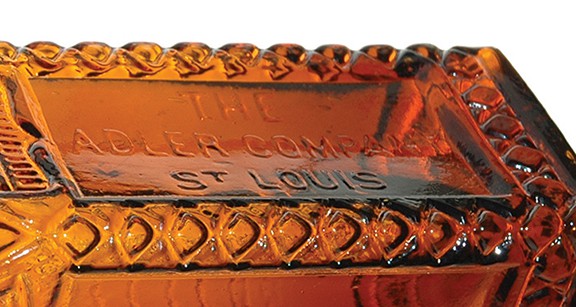 I recently received and email and 1866 newspaper clipping (below) from Mark Wiseman about an unlisted Adler’s Celebrated Anti-Cholera Bitters put out by S. Adler & Company in St. Joseph, Missouri. This rang a bell. After researching, I found out that this is the same “Adler” embossed on Landsberg’s Century Bitters (see top of post).

Simon Adler was a life-long liquor man born in Darmstadt Germany around 1830. His parents were also from Darmstadt which is a city near Frankfurt in southwest Germany. It’s known for the Mathildenhöhe district’s art nouveau buildings, like the iconic Wedding Tower. I’m not sure when Adler came to America, but he most likely arrived in New York at a young age and made his way to Saint Joseph, Missouri, arriving in 1859. St. Joseph (informally St. Joe) is north of Kansas City. Speaking of weddings, Adler would marry Anna Cohen (1847–1914) and they would have four boys, Irvin, Jessie, Arthur and Charles.

We next see Civil War Draft Registration Records for Simon Adler in 1843 in St. Joe. Then we see Simon Adler as the proprietor of Adler’s Celebrated Anti-Cholera Bitters addressed at E. Side Market Square and 17 Third in St. Joe in 1866 and see him listed as a liquor dealer and rectifier with S. Adler & Company in 1870. They were housed in a 3-story brick building. Abraham Furst was his brother-in-law and partner.

The bitters was a remedy targeting a scourge named Asiatic Cholera. The second cholera pandemic (1826–1837), also known as the Asiatic Cholera Pandemic, was a cholera pandemic that reached from India across western Asia to Europe, Great Britain and the Americas, as well as east to China and Japan. Cholera caused more deaths, more quickly, than any other epidemic disease in the 19th century. Adler said the concoction or versions of the medicine and been in use for fifty years and used testimonials from Professors Chapman, Bird and Andral in London and Professors Geradin and Gatmard of Germany. I can find no examples of this bottle which could have been embossed or just sold with a label.

The 1870 United States Federal Census lists Adler’s personal estate value at $2,000 and his real estate value at $30,000 so he must have been fairly successful at that time. He reportedly was one of St. Joe’s most energetic and successful business man and popular and influential with his friends and business associates.

Events took a turn for the worse later in 1875, as Simon Adler became the target of U.S. federal agents in a scandal involving the switching of uncancelled duty stamps on liquor bottles and a series of articles appeared in the Missouri newspapers including the Globe-Democrat. At one point Adler’s stock was confiscated and the principals, Adler and his partner Abraham Furst, were imprisoned for a year and each assessed a fine of $10,000. They were accused of being conspirators with other indicted companies in the area.

By 1877, the company is listed as Adler Company with Simon Adler (president) and Emanuel Fist selling liquors at 19 S. 2nd Street in St. Louis, Missouri. Abraham Furst was still his partner. The Landsberg’s Century Bitters bottles, embossed “THE ADLER COMPANY, ST. LOUIS” were made during this period and were embossed 1876.

Read: Looking at some Landsberg bottles

By this time, Adler had moved from St. Joe to St. Louis in 1878 and would die of softening of the brain (senile dementia) on September 7, 1884. Adler had gone abroad for several years prior to his death to obtain some sort of relief. He would leave his children a considerable fortune. The renamed Adler Distilling Company would continue with Abraham Furst as president located at 111 S. Main Street. 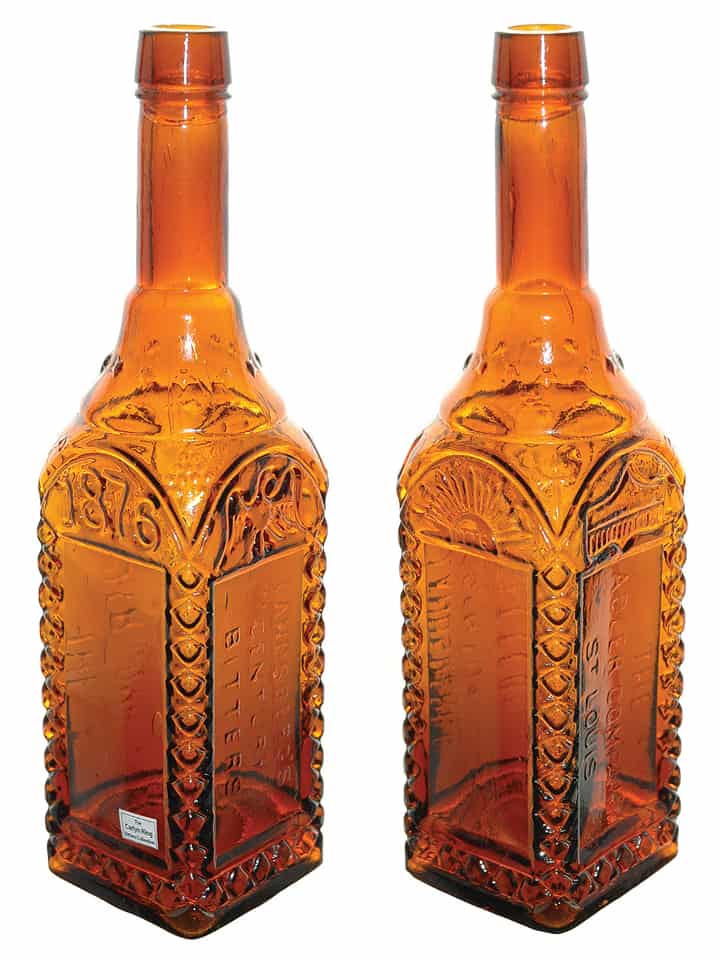 Note: Design No. 12,861 patented April 11, 1882 by Moses Landsberg of Chicago, Illinois. “The object of my present invention is to furnish a novel design for a bottle; and it consists of making the body of the bottle with four rectangular sides (panels), having arched tops, two of the alternate faces or facets being left smooth; or all four of the sides may be left plain; and in the arch spaces over the rectangular faces are represented respectively a shield, the figures 1876, a spread eagle, and a rayed sun. The edges of the sides of the bottle are corrugated in lozenges, while the base is surrounded by a series of hexagons. The neck of the bottle represents the handle, and the shoulder of the body of a bell, the bell being encircled midway by a ring of stars”.

1875: Passage: Matters were looking bad for Simon Adler as well, and he soon became the target of US federal agents in a scandal involving the switching of uncancelled duty stamps on liquor bottles and a series of articles appeared in the Missouri newspapers including the Globe-Democrat. At one point Adler’s stock was confiscated and the principals, Adler and his partner and brother-in-law Abraham Furst, were imprisoned for a year and each assessed a fine of $10,000. They were accused of being conspirators with other indicted companies in the area. – Diary with Description of Legal Case of S. Adler Liquors. St Joseph, Missouri, 1875

1876: Newspaper clipping (below): Simon Adler, one of the prisoners of the Cole County jail – St Joseph Weekly Herald, Thursday, September 11, 1884 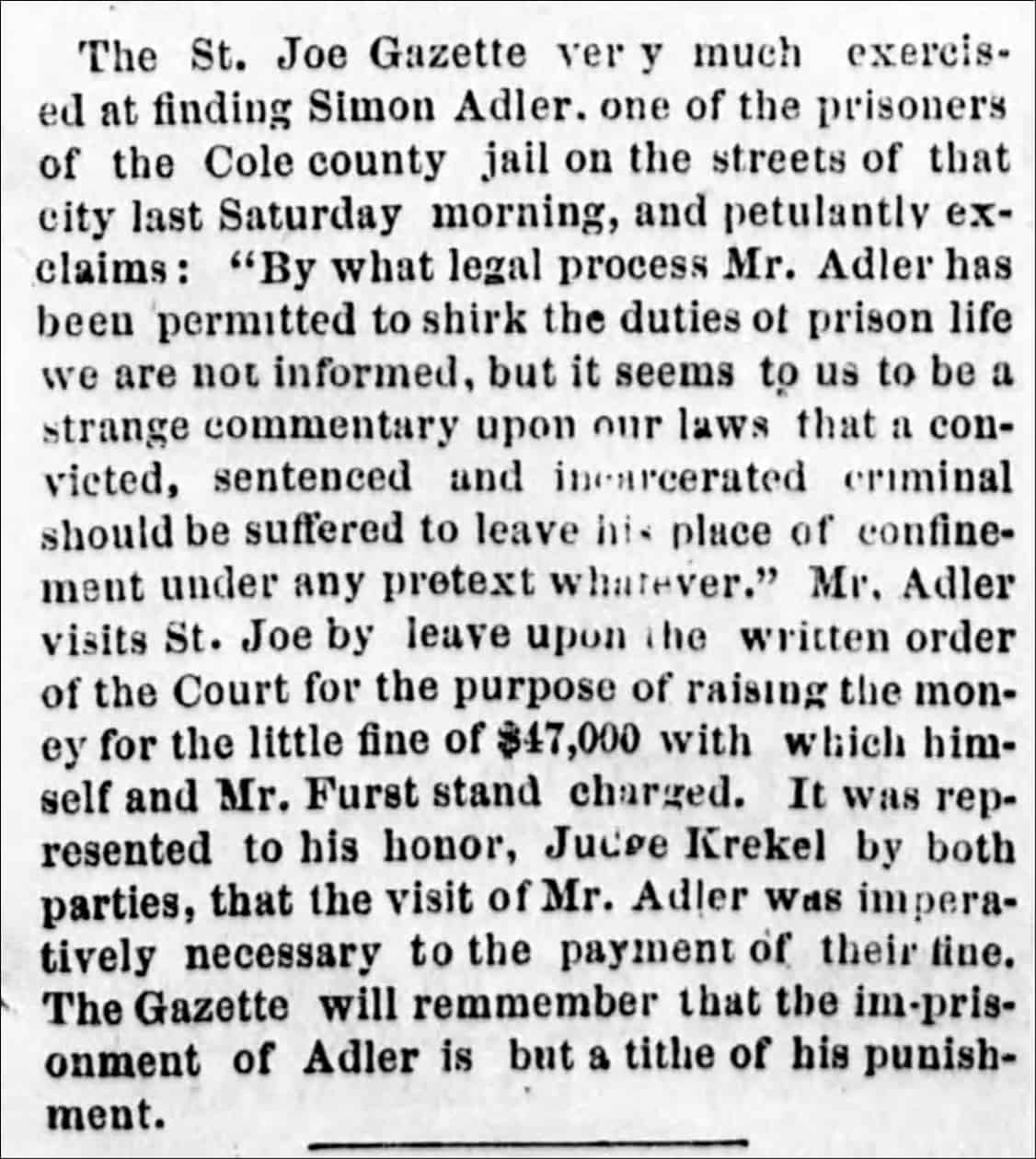 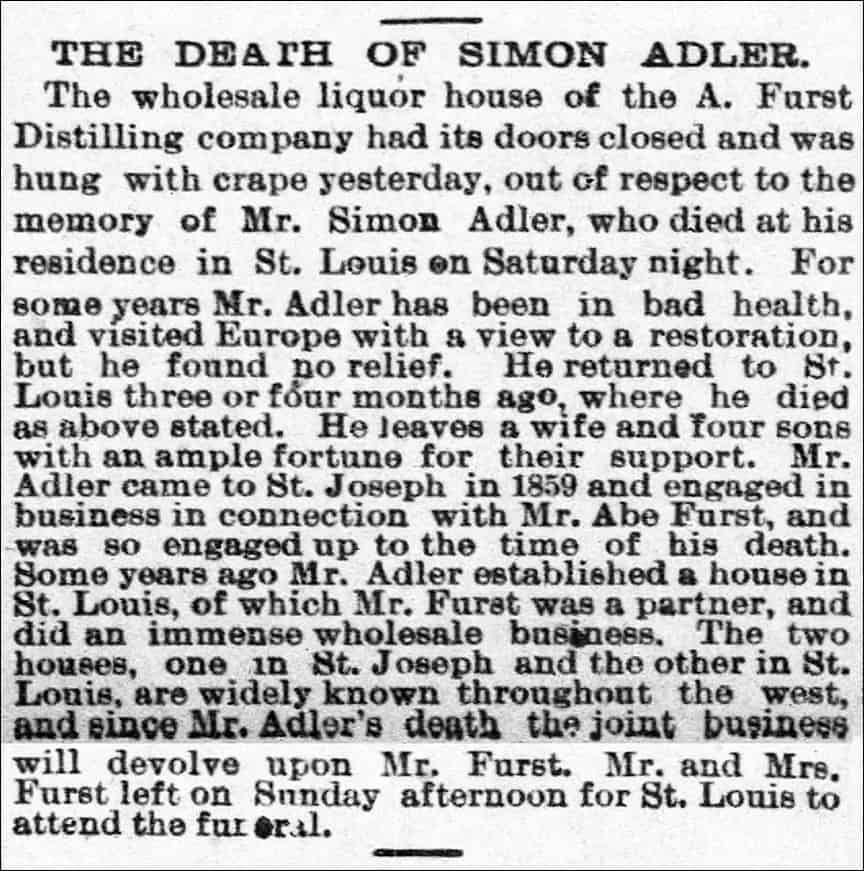