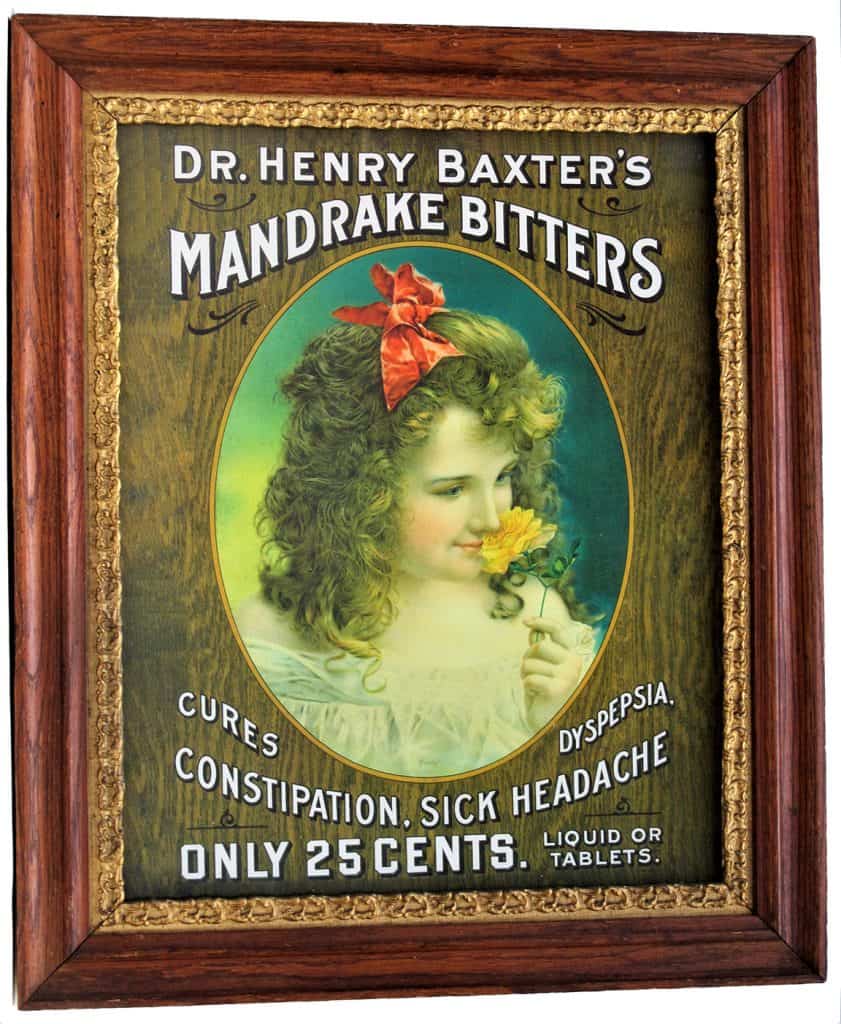 I’ve had a Dr. Baxter’s Mandrake Bitters tucked away in my collection for many years. The bottle is from Burlington, Vermont and is kind of cool because it has 12 sides! It is pretty common though so it doesn’t get much attention. I like it anyway and it remains a favorite. 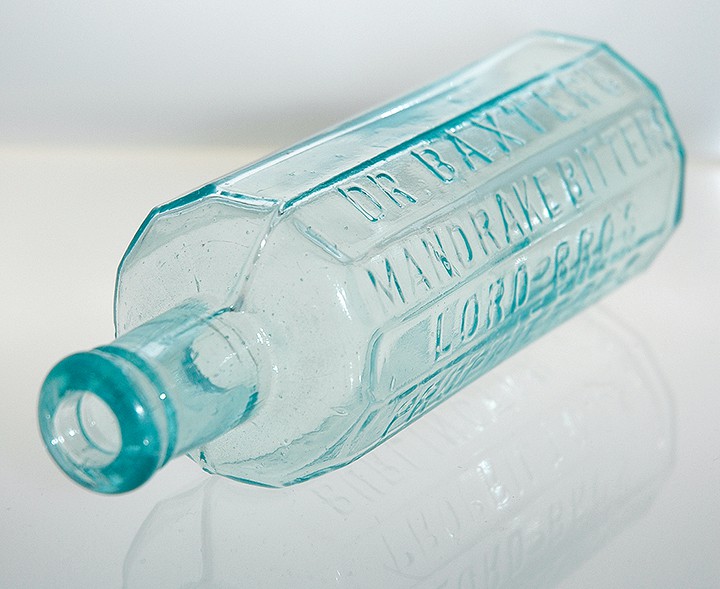 I thought I would do a post because a framed advertising piece closed on McMurray Antiques & Auctions this past Sunday. It is pictured at the top of this post. Terry McMurray’s lot write-up is below:

DR. HENRY BAXTER’S MANDRAKE BITTERS CURES DYSPEPSIA, CONSTIPATION, SICK HEADACHE. ONLY 25 CENTS. LIQUID OR TABLETS. 21” X 25” PAPER SIGN IN EX. CONDITION IN A NICE PERIOD OAK FRAME. NICE IMAGE OF YOUNG GIRL HOLDING FLOWER AT CENTER. A RARE AND ATTRACTIVE PATENT MEDICINE SIGN I’VE NOT SEEN BEFORE AND READY TO HANG ON THE WALL. ALSO PICTURED ON THE FRONT COVER OF THIS CATALOG. (600-1,000) 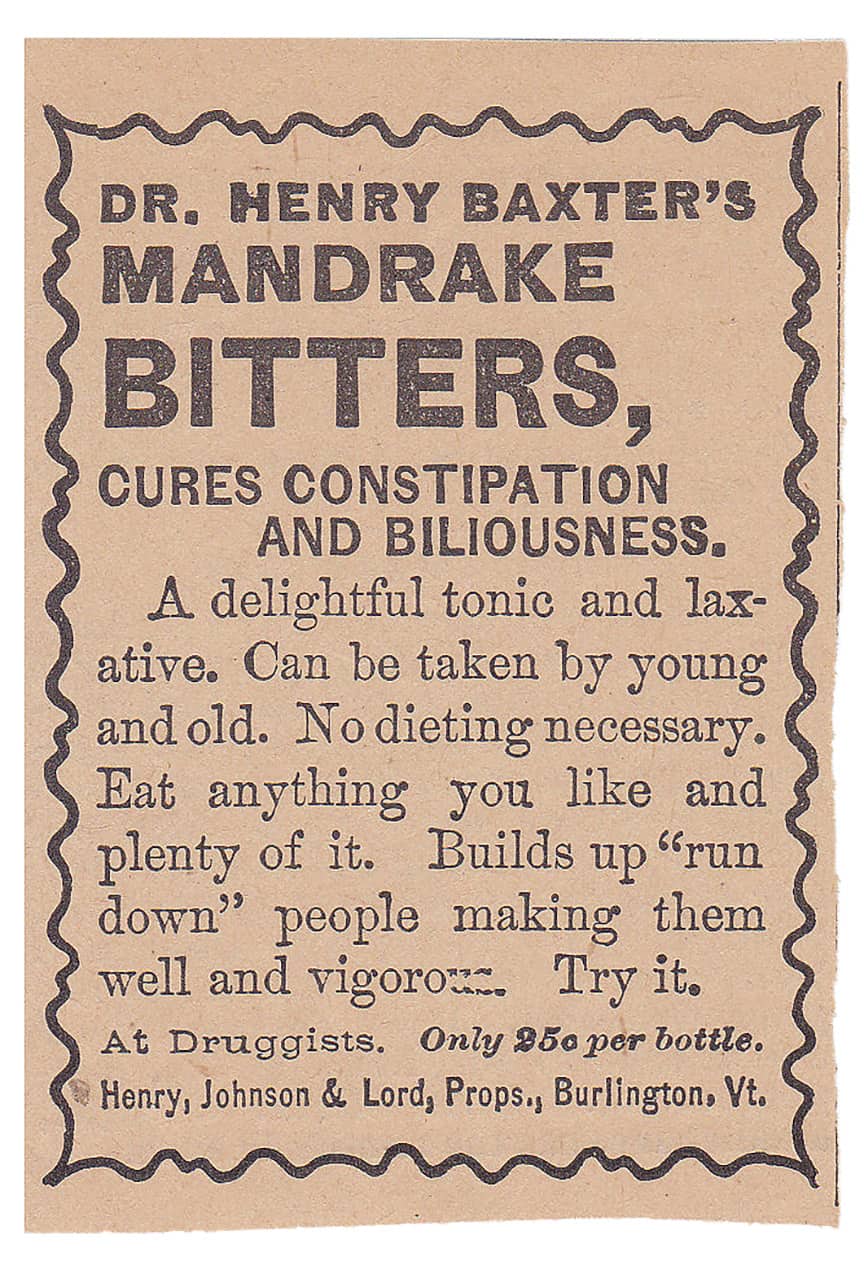 Advertisement above from the Joe Gourd Collection

Dr. Henry Baxter was born in Norwich, Vermont in 1821 and settled in Highgate Falls, Vermont in 1842. He was primarily a physician though he owned and managed several businesses in Highgate including furniture, drug and grocery stores and H. W. Baxter & Co. undertakers. His patented medicine, Dr. Baxter’s Mandrake Bitters, was sold throughout Vermont in the late 19th century and as the advertising states, cured constipation, dyspepsia and sick headaches. It was sold for 25 cents in a liquid and pill form. It is thought that mandrake contains deliriant hallucinogenic tropane alkaloids so that’s a blast. The brand was represented by Henry, Johnson & Lord in Burlington, Vermont. Henry Baxter died on 27 September 1897 in Highgate, Franklin County, Vermont. 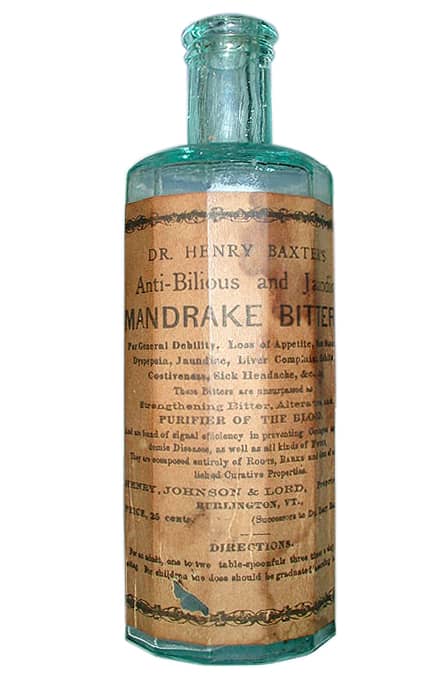 The bottle is pretty much the same form or very similar to a Dr. Carey’s Original Mandrake Bitters and Barber’s Indian Vegetable Jaundice Bitters from Rhode Island. You are also reminded of the family of Atwood’s Bitters.

He purchased the land and structure(s) known as the Manor House in the 1860s. The Manor House (also known as The Highgate Manor and Manor Mayfair) was used as a hotel, restaurant, B & B and had an interesting history, which included that of a haunted inn.

Henry, Johnson & Lord commenced business in Waterbury, Vermont in 1855. Lord Brothers were successors to the old house of Henry & Co. They pushed the wholesale drug trade so hard; they soon supplied the whole trade of Vermont, northern NY and NH with their goods. The company specialties included N.H. Downs Elixir, Arnica and Oil Liniment and many other extracts and essences. [VT Medicines] 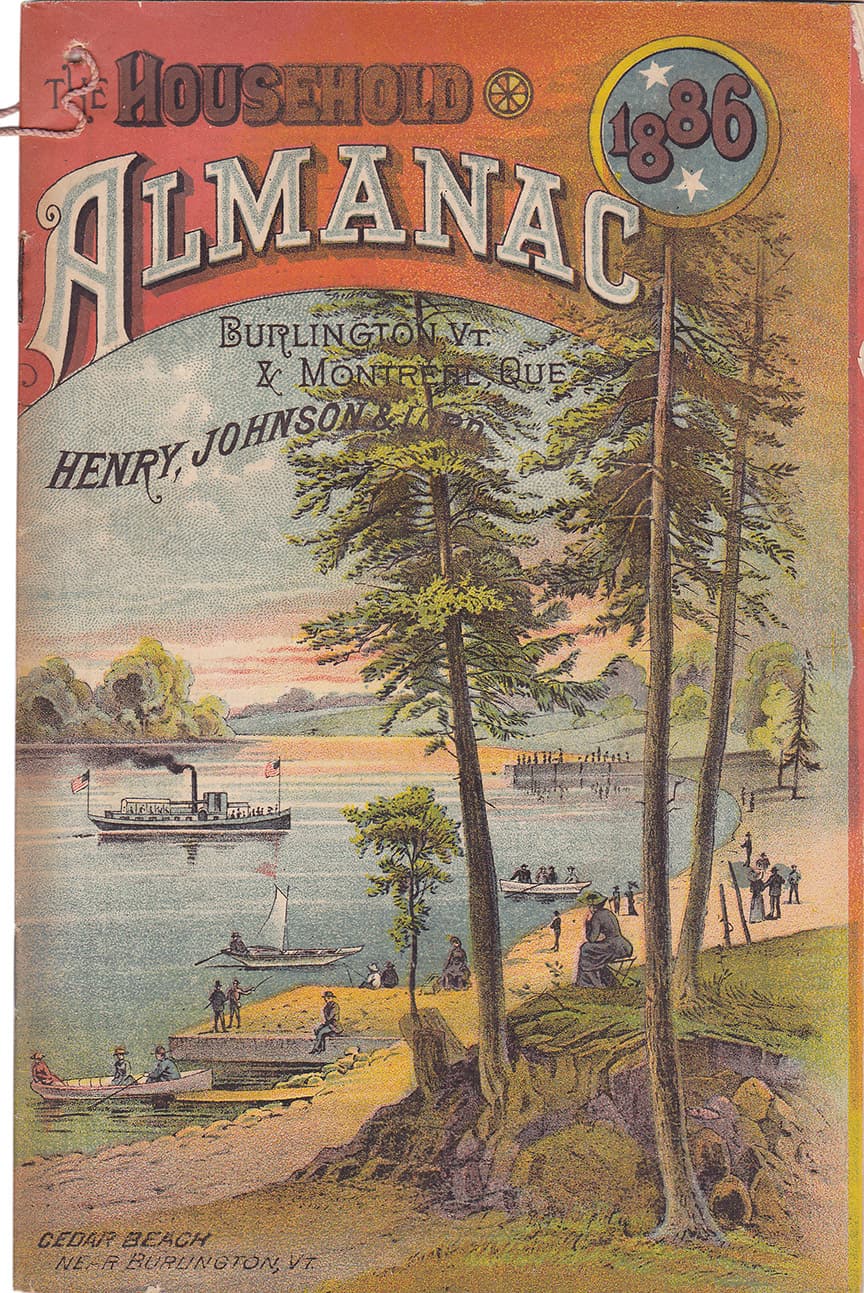 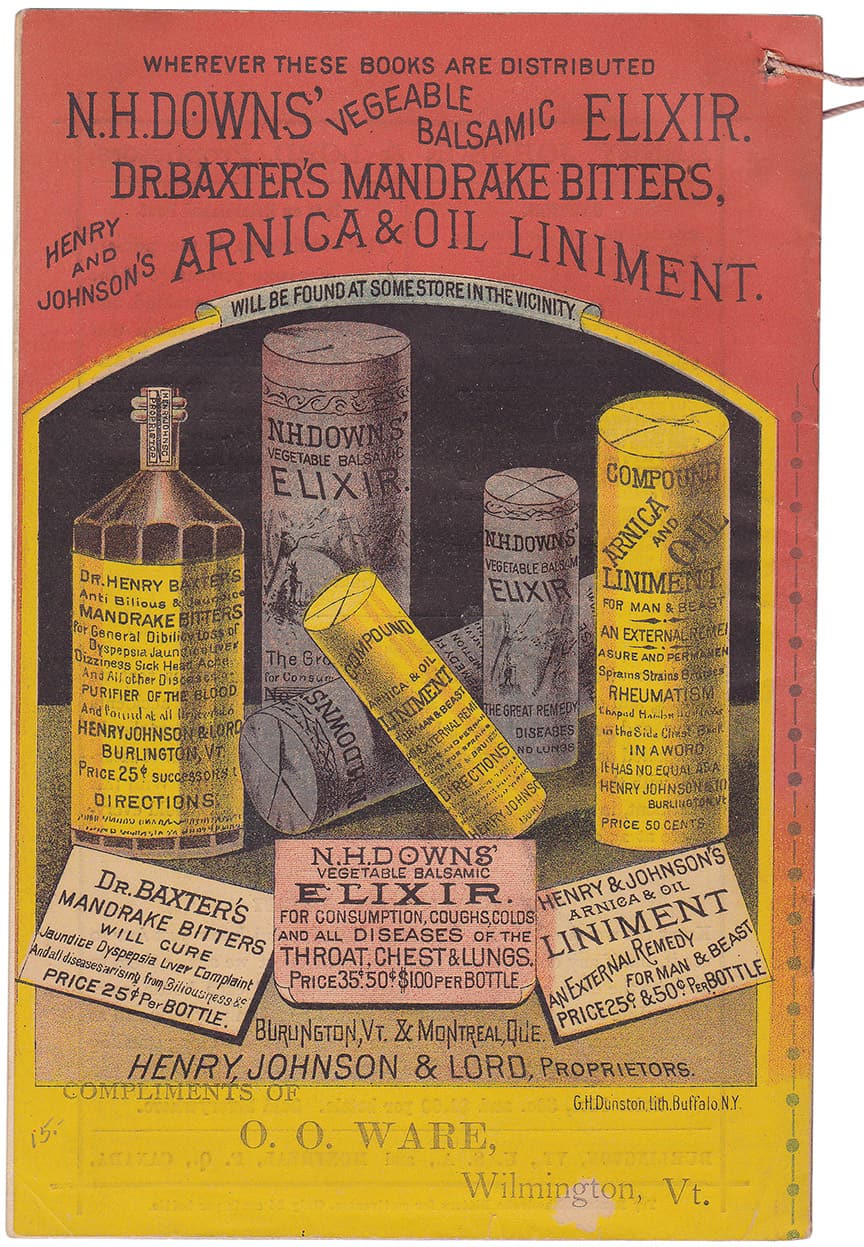 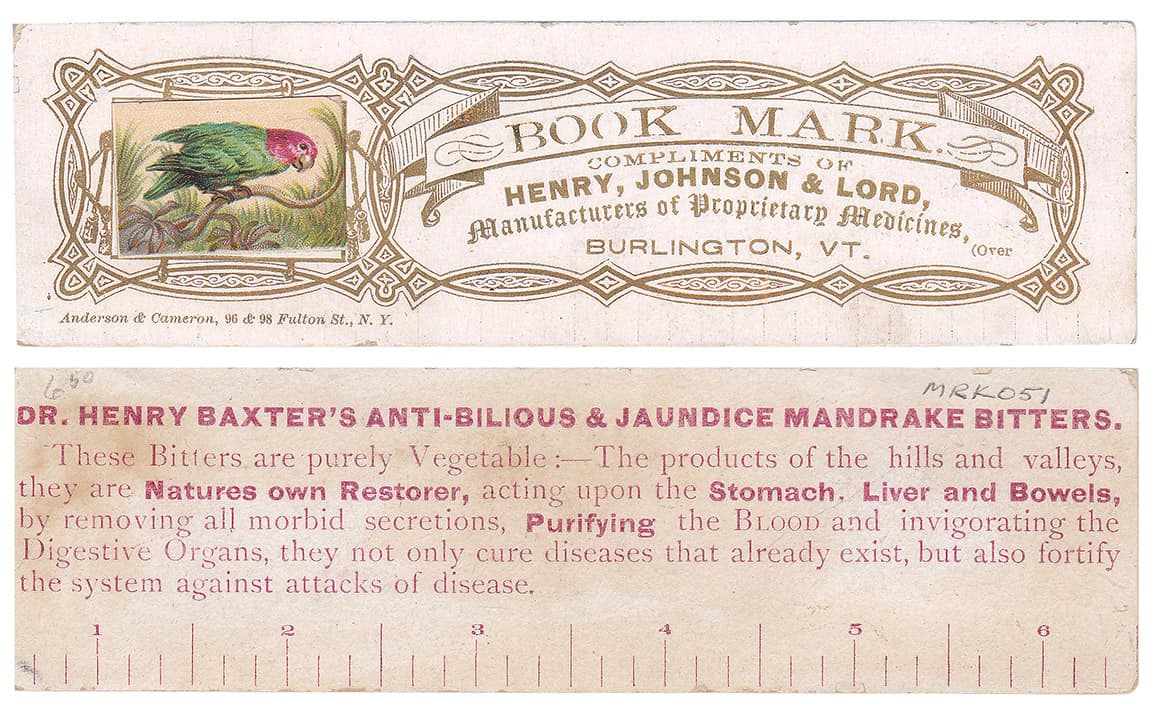 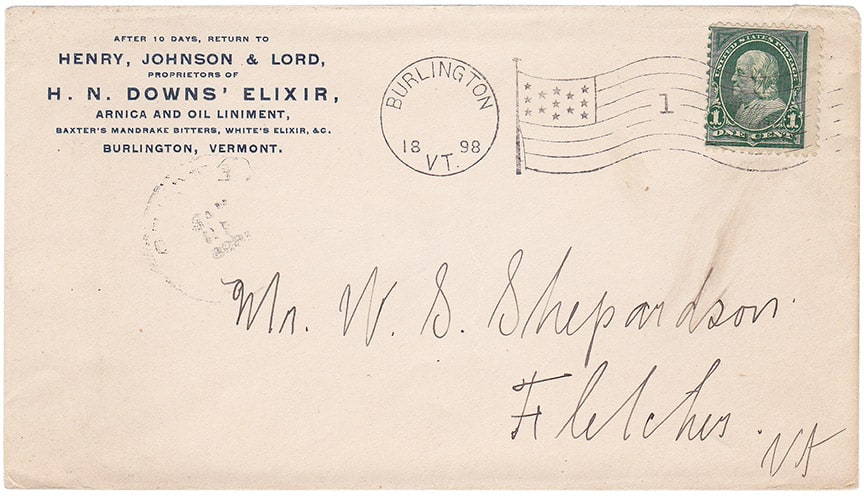 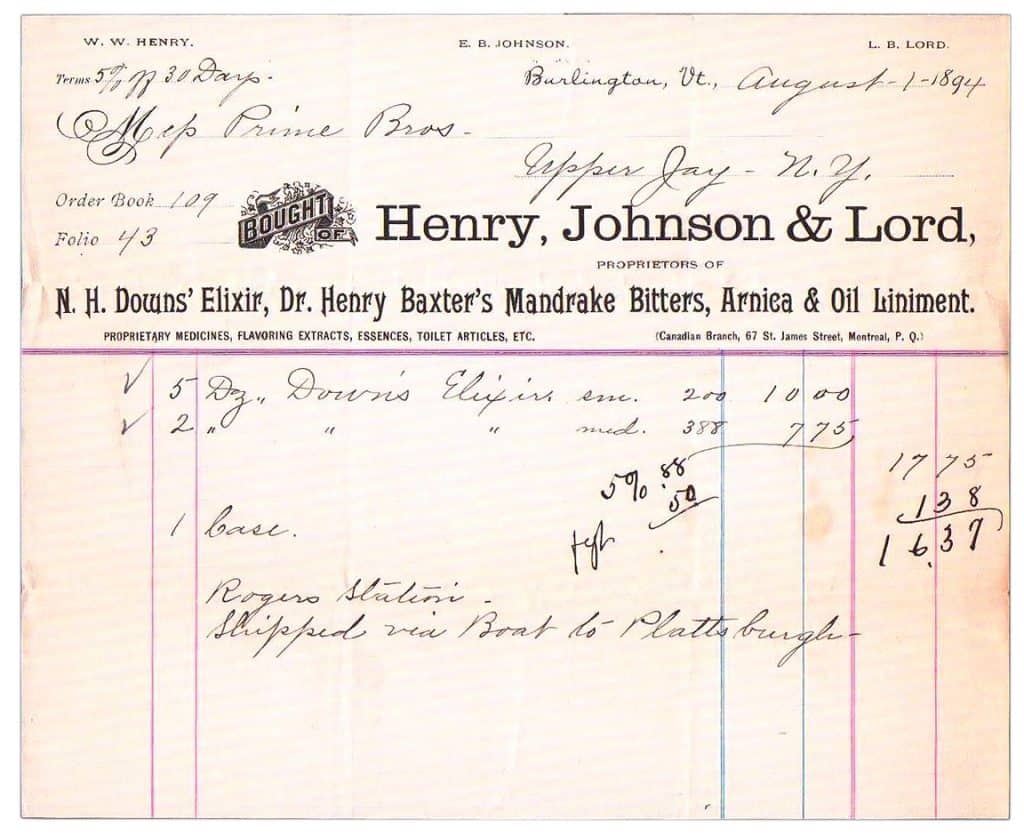 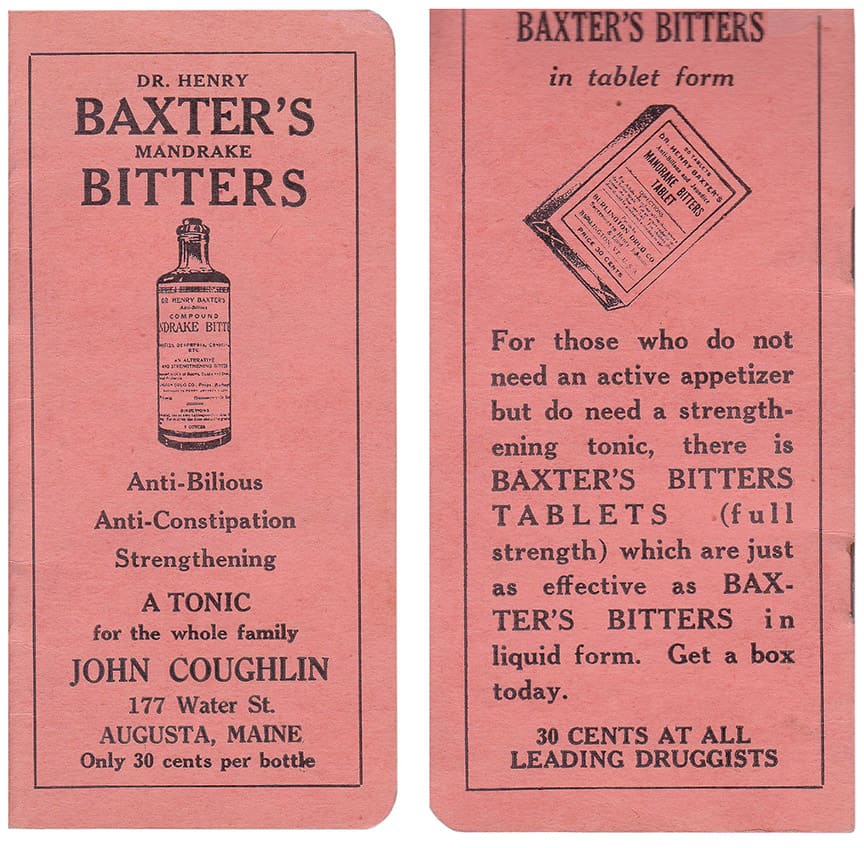 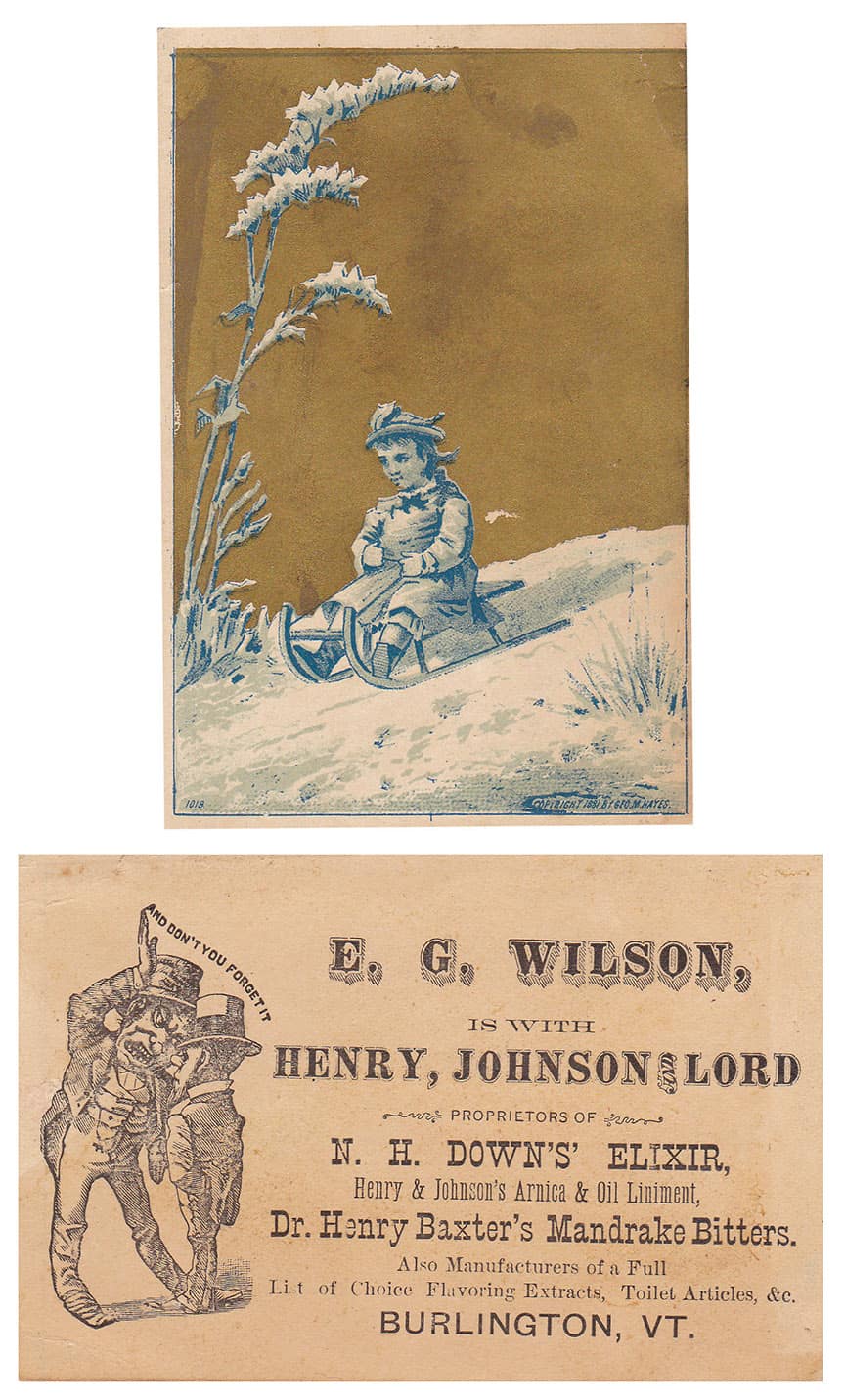 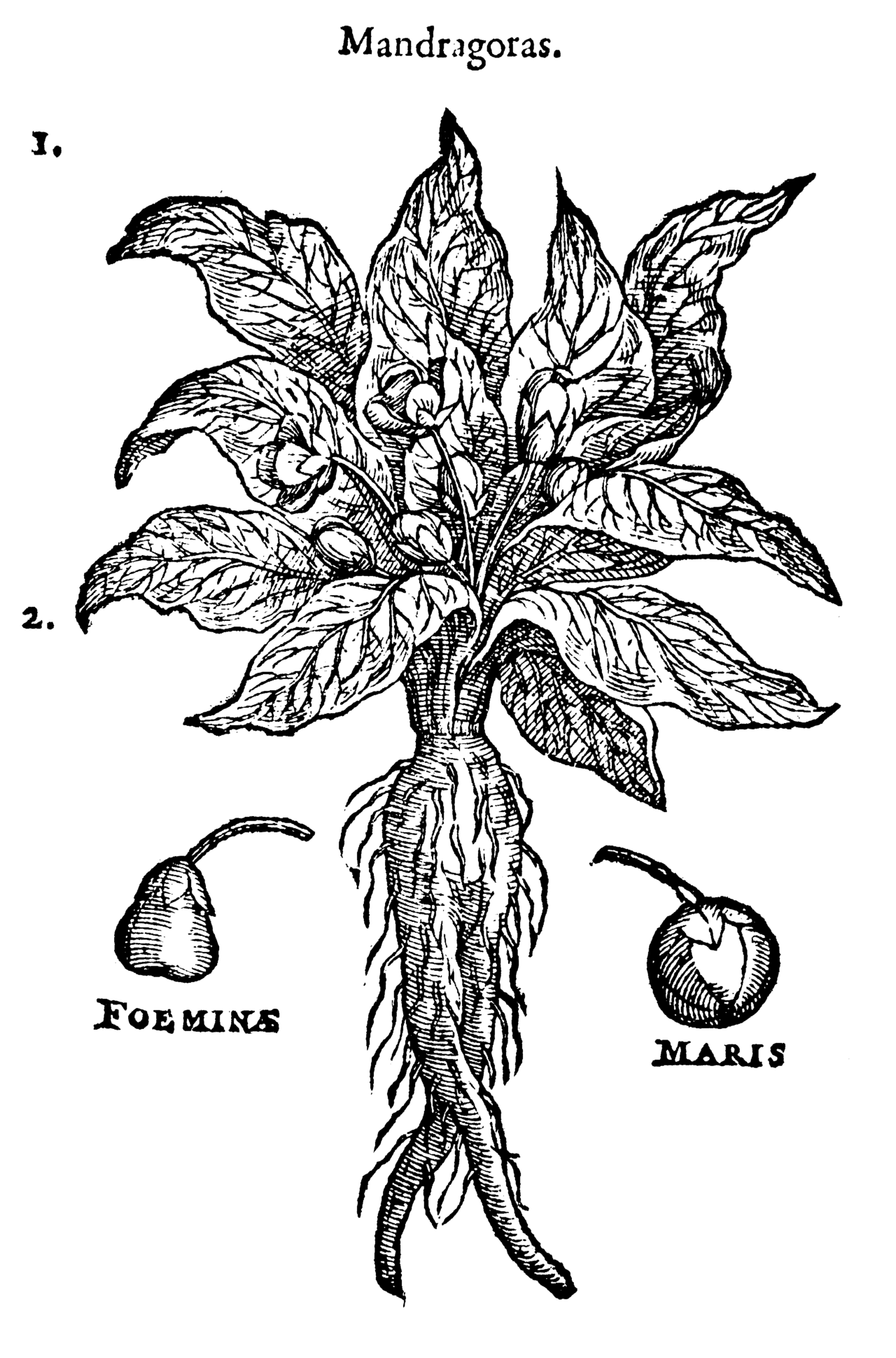 A mandrake is the root of a plant, historically derived either from plants of the genus Mandragora found in the Mediterranean region. The plants from which the root is obtained are also called “mandrakes”. Mediterranean mandrakes are perennial herbaceous plants with ovate leaves arranged in a rosette, a thick upright root, often branched, and bell-shaped flowers followed by yellow or orange berries. They are very variable perennial herbaceous plants with long thick roots (often branched) and almost no stem. The leaves are borne in a basal rosette, and are very variable in size and shape. They are usually either elliptical in shape or wider towards the end (obovate), with varying degrees of hairiness.

Because mandrakes contain deliriant hallucinogenic tropane alkaloids and the shape of their roots often resembles human figures, they have been associated with a variety of superstitious practices throughout history. They have long been used in magic rituals, today also in contemporary pagantraditions such as Wicca and Odinism. [Wikipedia] 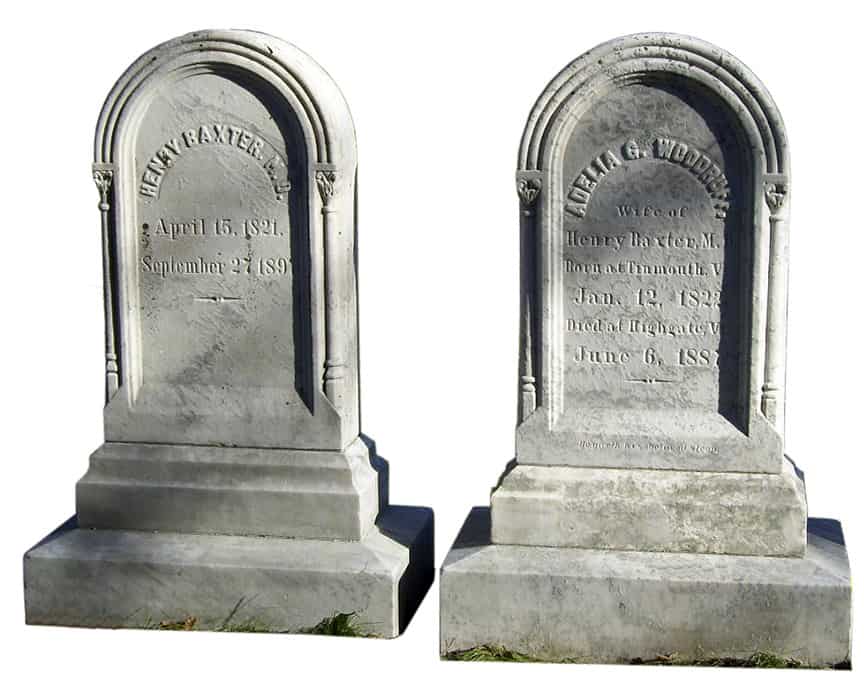 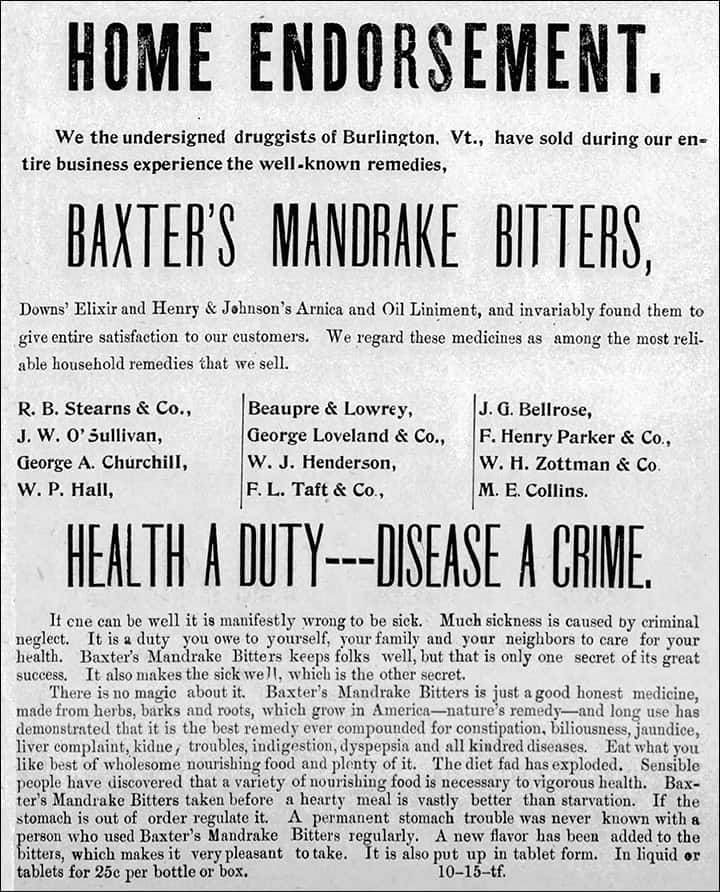 Ferdinand Meyer V is a native of Baltimore, Maryland and has a BFA in Fine Art and Graphic Design from the Kansas City Art Institute and School of Design. Ferdinand is the founding Principal of FMG Design, a nationally recognized design consultation firm. Ferdinand is a passionate collector of American historical glass specializing in bitters bottles, color runs and related classic figural bottles. He is married to Elizabeth Jane Meyer and lives in Houston, Texas with their daughter and three wonderful grandchildren. The Meyers are also very involved in Quarter Horses, antiques and early United States postage stamps. Ferdinand is the past 6-year President of the Federation of Historical Bottle Collectors and is one of the founding members of the FOHBC Virtual Museum.
View all posts by Ferdinand Meyer V →
This entry was posted in Advertising, Bitters, Druggist & Drugstore, Ephemera, History, Medicines & Cures and tagged advertising, Baxters, bitters, Burlington, Doctor, ephemera, Henry, Henry Baxter, Higate Falls, Joe Gourd, Johnson, Lord, Mandrake, Medicine, physician, Vermont. Bookmark the permalink.