Outlandish Fellow Dressed in a Suit with Top Hat and Umbrella 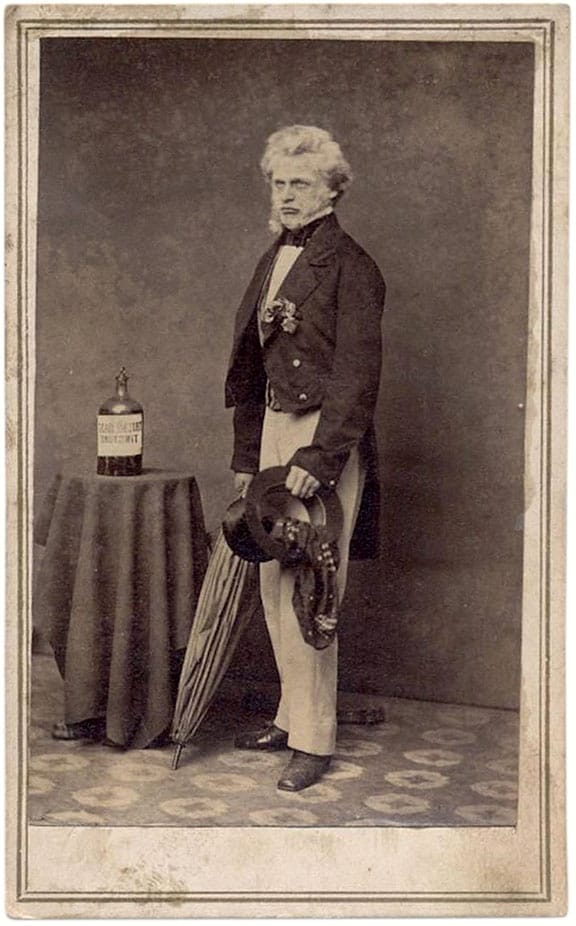 Outlandish Fellow Dressed in a Suit with Top Hat and Umbrella

“A young woman in Lynn, Mass., was induced to try Dr. True’s Elixir. As a result she was relieved of a tape worm, alive, 80 feet in length. Benjamin Hill of Auburn was likewise relieved of a tapeworm upwards of 70 feet long. A child of John Ferguson of Lewiston was relieved of one 60 feet long. A spotted lizard, 6 inches long, was expelled alive from the stomach of a woman in Bangor. From the stomach of a boy in Danville the Elixir expelled a living creature 18 inches long and two inches in circumference, a species of snake.”

Joe Gourd e-mailed the following, “Good morning Ferd, came across this photo of an early snake oil salesman in an eBay auction today. Not quite a “Bitters” item for my collection but a really cool card. Wonder who he was? Have a great day………Joe”. I too, thought it was a neat picture and posted it on Facebook and Daily Dose hoping to circle back later, which is now. 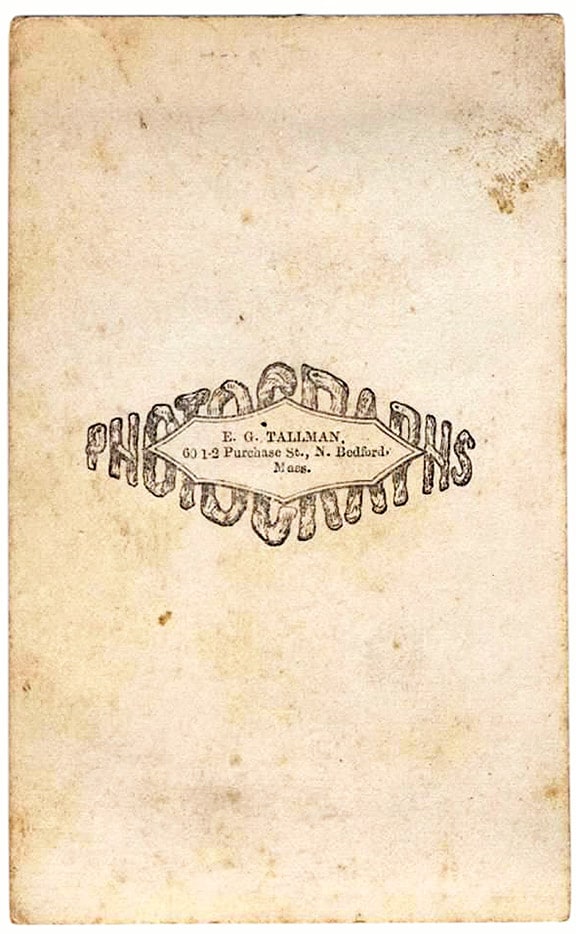 The eBay description from gallerybfa reads as follows. The front and back of the card is pictured above. 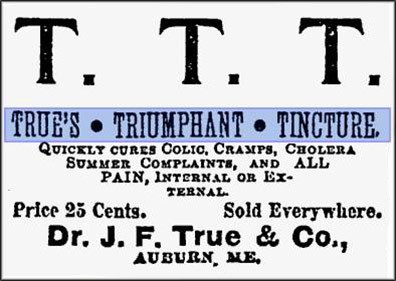 Dr. True (left) and Mr. Hyde (right). Did we really need this caption?

Then Brian Gray reponded on Facebook with, “It’s Mr. Hyde!”. This made me a chuckle. We’ve all had bad hair days and I do see a resemblance. It is also interesting that Dr. J. F. True’s illustrations of himself look a lot like President Abraham Lincoln. At this point I am beginning to wonder if Dr. True is really his name and not a brand alias though John F. and Edward C. True are clearly listed as patent medicine manufacturers in city directories. What is odd is that I can not find any United States Federal Census information or early history on the man, say pre-1851. Maybe he is really Mr. Hyde.

Interesting that Dr. True sold hair products along with his tape and pin worm elixirs. Look at the display below. 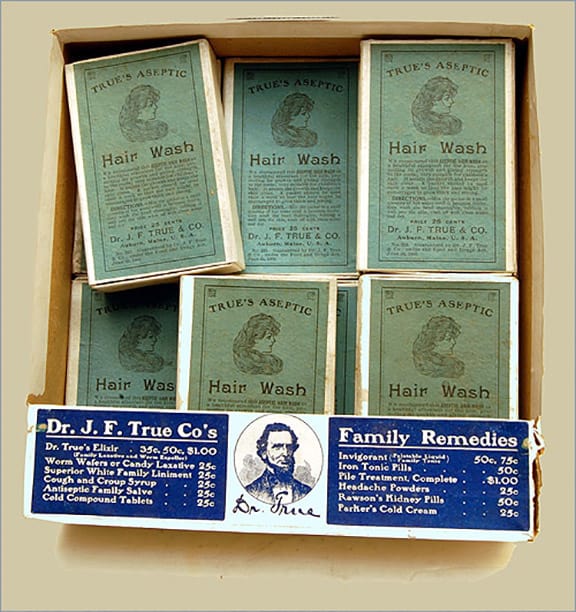 An original countertop display box of Dr. J. F. True’s Aseptic Hair Wash. True’s was an Auburn, Maine concern that appeared to be embracing government regulation of “family remedies”; this hair wash states on the label that it is guaranteed under the Food and Drugs Act, June 30, 1906. That consumers could be marketed to with words like “Aseptic”, reveals the growing popular awareness of germ theory. – Maine Maritime Museum

Here is one of Dr. True’s Elixir bottles with the Auburn, Maine address. Most of his advertising states that he was established in 1851.

This next 1873 map shows Lewiston, Maine. You can click the map to enlarge it. Dr. True’s house is within the red square. Lewiston is a city in Androscoggin County, Maine, and the second-largest city in the state. It is one of two principal cities of and included within the Lewiston-Auburn, Maine metropolitan area. 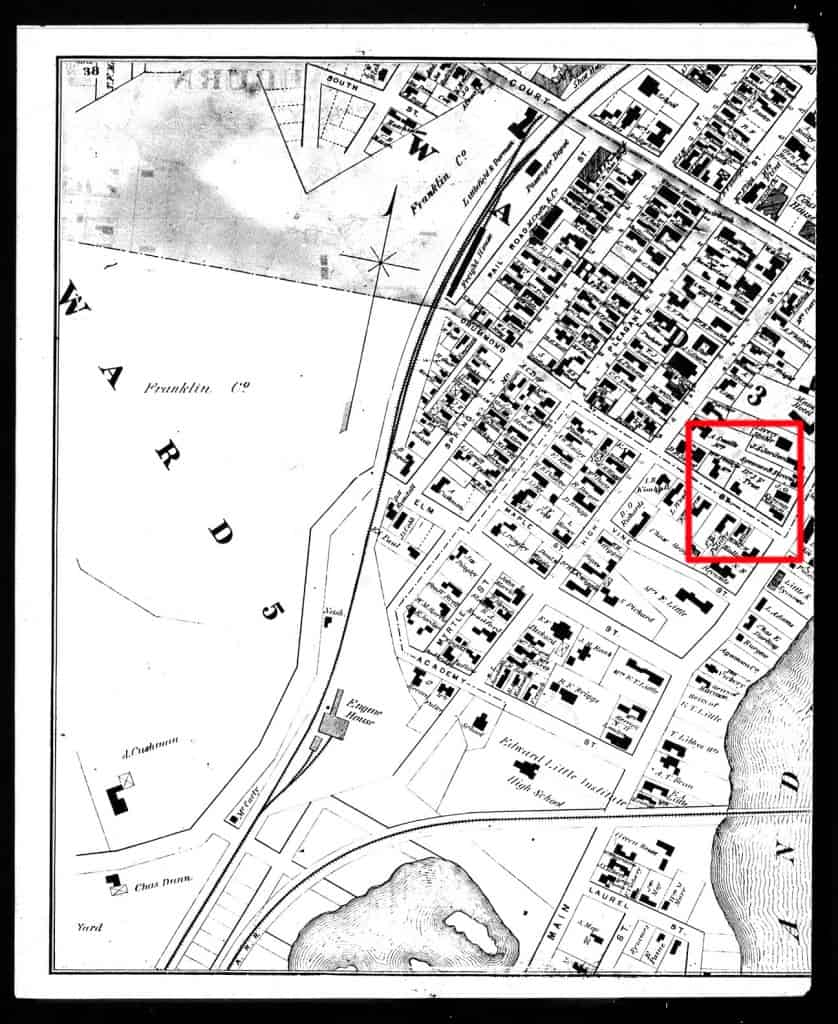 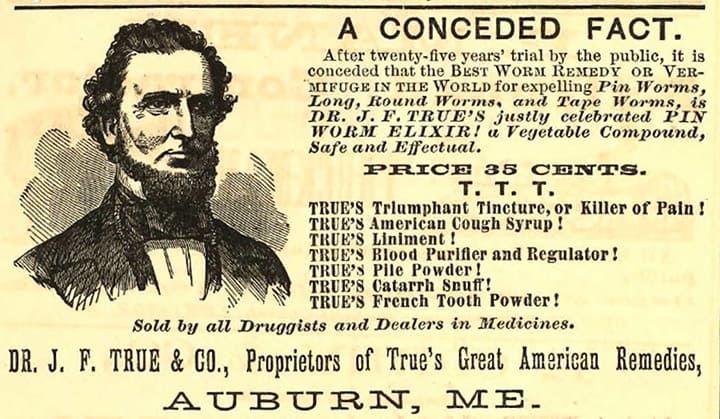 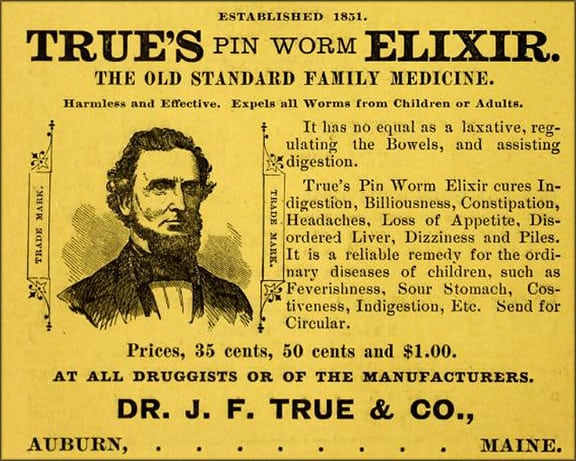 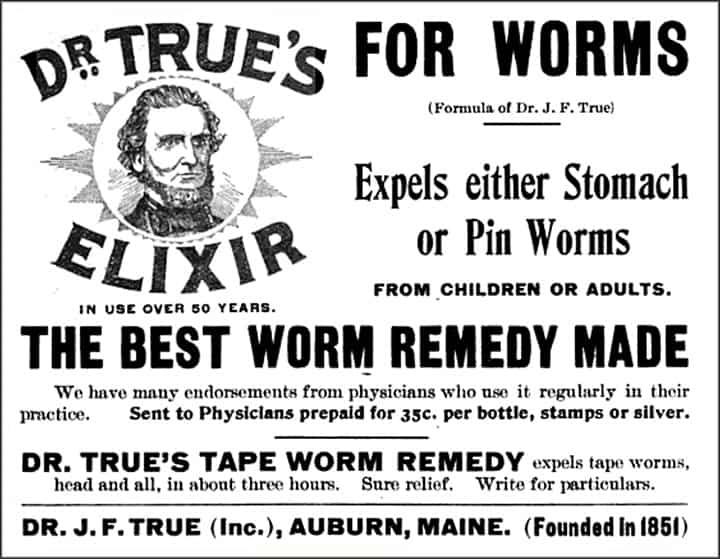 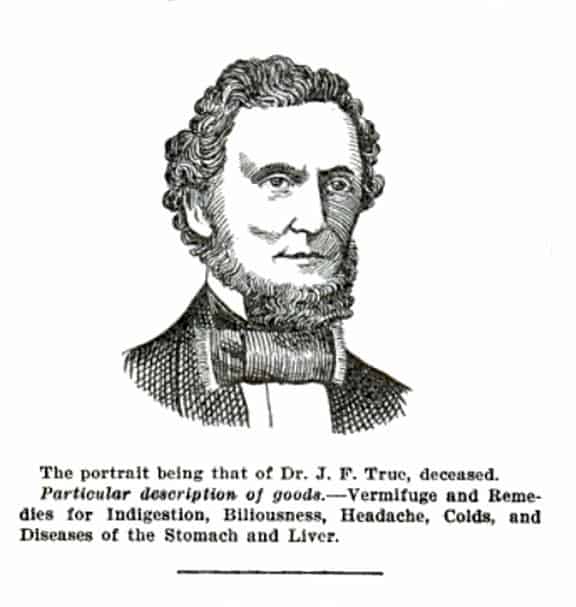 In 1851, Dr. John F. True of Exeter compounded for his own use the prescription now known as “True’s Elixir.” The success attending his own use of it interested him though he did not realize at the time that he compounded a remarkable medicine. He began introducing it to his neighbors. From that time it has met with success. Two years later, Dr. True came to Auburn, feeling the need of branching out.

“In 1877 it became necessary for the doctor to build a laboratory to keep pace with the ever increasing demand for his medicines. And again, eight years later, the need of expansion was again felt and he erected an addition. The product had by this time won a sure name for itself and its worth was recognized in the medical world. It was fast becoming a by-word in the household and proportionately the firm continued growing.

“In 1891 the present spacious laboratory was built on Drummond Street in the rear of the True home. The laboratory contains a 10 horsepower boiler that heats the building and furnishes the power.

“In these days of the multitude of ‘patent medicines’ widely advertised products of that nature come and go with regularity, flushing forth in big type for a few months or a year and then disappearing forever. But not so with the “medicine that has made Auburn famous.”

“For nearly 75 years, it has been used in these two cities, this State and all over New England, not mentioning shipments dispatched to all sections of the United States and foreign countries.”

Everybody of middle age today remembers the mild children’s laxative Castoria. Many gallons of the stuff were poured down kids’ throats, not only in-my own childhood, but in that of my own children. It is possible even my grand-children got doses of it. But who of my listeners recall a similar laxative, True’s Elixir? In my father’s store in Bridgton 70 years ago that medicine was a lively rival of Castoria. What is not even so well remembered is the fact that True’s Elixir was distinctly a Maine product, devised by Dr. John L. True in 1851.

Older persons now living, who remember Dr. True’s manufacturing laboratory on Auburn’s Drummond Street hill, recall the pungent odor of herbs and other concoctions that pervaded the atmosphere for yards around the place.

It started as a remedy for worms in the digestive tract, and was at first called Dr. J. L. True’s Pin Worm Elixir. As late as 1923, when it had adopted the simpler name of True’s Elixir, annual sales reached 155,000 bottles. Older persons now living, who remember Dr. True’s manufacturing laboratory on Auburn’s Drummond Street hill, recall the pungent odor of herbs and other concoctions that pervaded the atmosphere for yards around the place.

Dr. True had not even come to Auburn when he worked out his formula for the famous elixir. That was done in 1851, in his home kitchen at Exeter, Maine. At first Dr. True peddled his product, house to house, in neighboring towns. In 1853 he moved to Auburn and began the shipment of his elixir to far away places. In Auburn he had the advantage of access to the new Androscggin and Kennebec R.R., making connection at Portland for Boston and more distant points.

When Dr. True died in 1900, his two sons continued the business for many years. In 1947, the True family sold to George Lane, Auburn financier, who made the business a subsidiary of a larger corporation with a laboratory in Hanover, Mass. The next producer was George Tobias of Natick, Mass., who was putting out True’s Elixir there in 1952. Its final producer, when it was abandoned only 17 years ago in 1955, was the same company that manufactured the renowned Lydia Pinkham’s Vegetable Compound. At any rate, True’s Elixir was poured down children’s throats for more than a hundred years.

Although medical research later persuaded the manufacturers of True’s Elixir to give up all mention of worms, it was parents’ dread of pin worms in children that accounted for the rapid growth of Dr. True’s sales in the last half of the 19th century, True advertised that he had by far the best remedy ever devised, to rid the body of the dreaded worms. His ads showed pictures of curious creatures preserved in alcohol in bottles and jars, which True claimed had been expelled by his elixir. The collection included not only pin worms and tape worms, but even frogs and lizards.

Just listen to a few of Dr. True’s testimonals: “A young woman in Lynn, Mass., was induced to try Dr. True’s Elixir. As a result she was relieved of a tape worm, alive, 80 feet in length. Benjamin Hill of Auburn was likewise relieved of a tapeworm upwards of 70 feet long. A child of John Ferguson of Lewiston was relieved of one 60 feet long. A spotted lizard, 6 inches long, was expelled alive from the stomach of a woman in Bangor. From the stomach of a boy in Danville the Elixir expelled a living creature 18 inches long and two inches in circumference, a species of snake.” There are plenty more of those testimonals, but I’m sure I’ve already given you enough to turn your stomachs.

Yet hold on for just a few. Dr. True used novel devices in his advertising. In one ad was a drawing of a young man carrying a sandwich board over his shoulders, which said: “A wonderful remedy. The most popular medicine of the day is Dr. John L. True’s Pin Worm Elixir. What the White Mountains of New Hampshire are to the mountains of New England, Dr. True’s Pin Worm Elixir is to all other worm remedies. A great discovery! Yes, Sir! There is no use talking; it is a fact that Dr. True’s Pinworm Elixir is the best worm expelling on the market. Tributes to its efficacy are abundant. – Sold at all druggists.”

One of True’s most original ads appeared in 1860 in the Lewiston Gazette,a rival paper to the better known Lewiston Journal. That ad said: “Grand Trunk Canal. As a large amount of freight which should be used for better purposes is being consumed daily by a sponging set of loafers called worms that infest the Alimentary Canal, we would call the attention of those who see and feel the sad effects of those varmints to a safe and effective remedy called Dr. John L. True’s Justly Celebrated Pin Worm Elixir.”

Another of True’s ads was worded: “As a pin worm exterminator Dr. True’s is tops. When True’s Elixir hits the worms, he knows it is useless to struggle and he must surrender. The latest capture was from a man in Melrose, Mass., from whom was ejected a worm 60 feet long in less than three hours, head and all.”

A slogan common in my boyhood concerning this faire-born remedy was itself a play on the doctor’s name. The slogan that heralded True’s Elixir was “How True!”

1851: Dr. True worked out his formula for his famous elixir in 1851, in his home kitchen at Exeter, Maine. – The History of Penobscot County, Maine

1853: In 1853 he moved to Auburn and began the shipment of his elixir to far away places. – The History of Penobscot County, Maine

Ferdinand Meyer V is a native of Baltimore, Maryland and has a BFA in Fine Art and Graphic Design from the Kansas City Art Institute and School of Design. Ferdinand is the founding Principal of FMG Design, a nationally recognized design consultation firm. Ferdinand is a passionate collector of American historical glass specializing in bitters bottles, color runs and related classic figural bottles. He is married to Elizabeth Jane Meyer and lives in Houston, Texas with their daughter and three wonderful grandchildren. The Meyers are also very involved in Quarter Horses, antiques and early United States postage stamps. Ferdinand is the past 6-year President of the Federation of Historical Bottle Collectors and is one of the founding members of the FOHBC Virtual Museum.
View all posts by Ferdinand Meyer V →
This entry was posted in Advertising, eBay, Hair Tonics, History, Medicines & Cures and tagged Auburn, Dow, Elixir, Gourd, Hair, Hat, Hyde, John, Lewiston, Lincoln, Maine, Marianne, Medicine, oil, Patent, pin, snake, tape, True, Umbrella, worms. Bookmark the permalink.