Dr. Von Cort’s Restorative Bitters (and his Segars for Asthma) 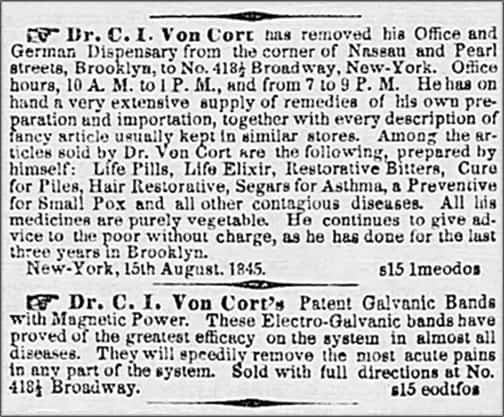 Dr. Von Cort’s Restorative Bitters  (and his Segars for Asthma)

With this series of Restorative Bitters posts of late, I can not but feel that they are all connected. The brands all contain the word “Restorative”, “Health” or “Bitters” and they were all sold in New York City around 1840 to 1855. At that time, herb remedies were in vogue and prescriptions were unknown. This was not the era of bitters loaded with alcohol. These guys were also German.

He prepares the following medicines by himself: Life Pills, Life Elixir, Restorative Bitters, Cure for Piles, Hair Restorative, Segars for Asthma, and a Preventative for Small Pox.

The advertisement at the top of the post is from the New York Tribune on Monday, November 10, 1845. It says that Dr. C. I. Von Cort is moving his office and German Dispensary from the corner of Nassau and Pearl streets in Brooklyn to 418 1/2 Broadway in New York City. He prepares the following medicines by himself: Life Pills, Life Elixir, Restorative Bitters, Cure for Piles, Hair Restorative, Segars for Asthma, and a Preventative for Small Pox. All his medicines were purely vegetable. He also sold Von Cort’s Patent Galvanic Bands with Magnetic Power. The Restorative Bitters is unlisted.

(some listings say his middle initial is “I”)

I believe that Charles J. Von Cort was born in Bremen, Germany. He arrives on the ship Republic in 1839. He declares by oath to become a citizen of United States in 1843 and is granted citizenship on December 29, 1847. He sets up shop selling medicines in Brooklyn in 1842 and relocates to New York City in 1845. He is advertising his Von Cort’s Restorative Bitters the same year. He remains a physician at the Broadway address and “continues to give free advice to the poor as he has done the last three years in Brooklyn”. His office hours are from 10:00 am to 1:00 pm and 7:00 pm to 9:00 pm. I trust he sold his remedies during the other hours (or chased skirt). Dr. Von Cort dies a rather young man of heart disease in January 1866. Maybe from smoking too many segars for asthma.

Dr. Von Cort boasted that he had the peculiar power to win the affections of any woman, married or unmarried.

Was Von Cort really a doctor? I see no evidence of Von Cort attending a medical college. As a matter of fact, he is fined in 1843 as an “Illegal Practitioner”. 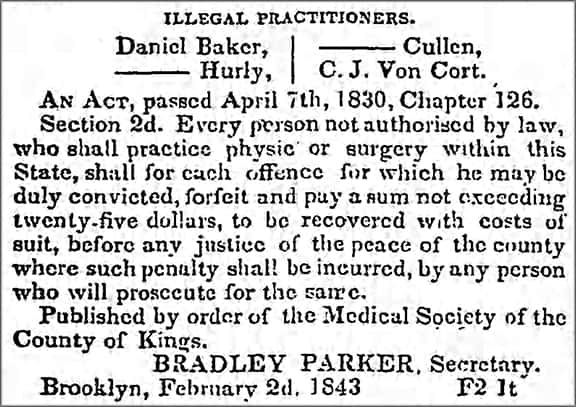 Dr. Von Cort also gets in trouble with his wife as she files for divorce on the grounds of him committing adultery. It seems that old Charles, who lived in a corner room above his drug store in Brooklyn also had an eye for the ladies. Testimony stated that Dr. Von Cort boasted that he had the peculiar power to win the affections of any woman, married or unmarried. He was probably using his Life Pills and a Love Elixir.

Had found the Doctor sitting in Mrs. Osborne’s lap; has seen them together in the office back of the drug store, the door shut and locked. 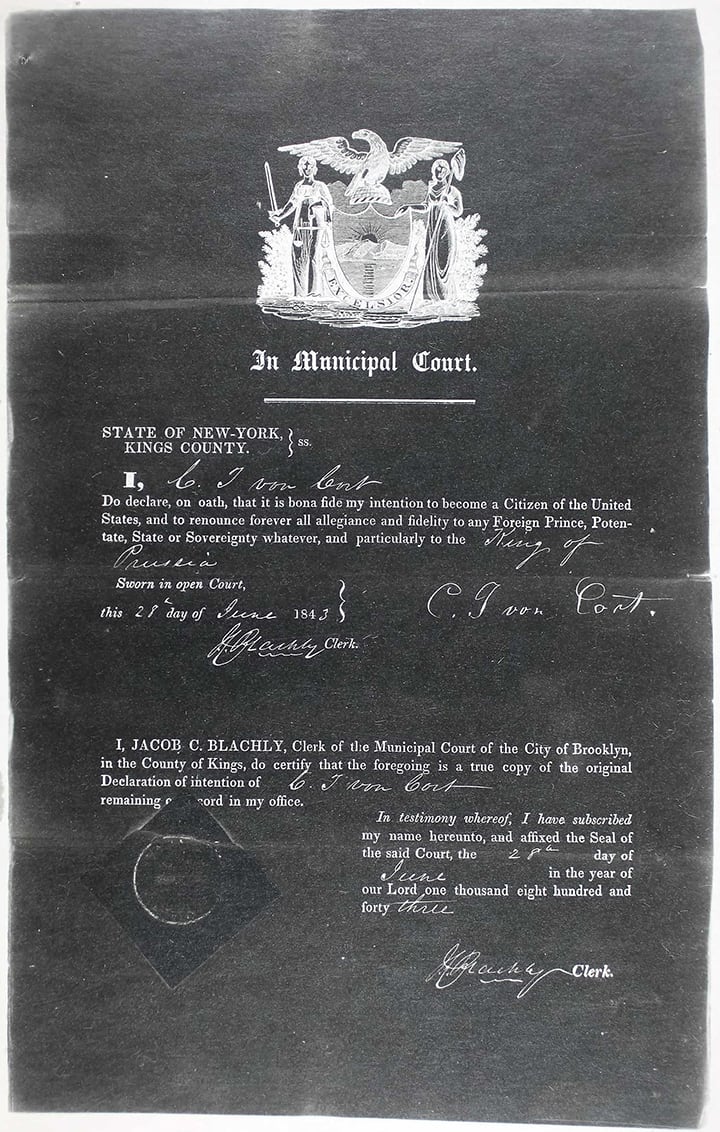 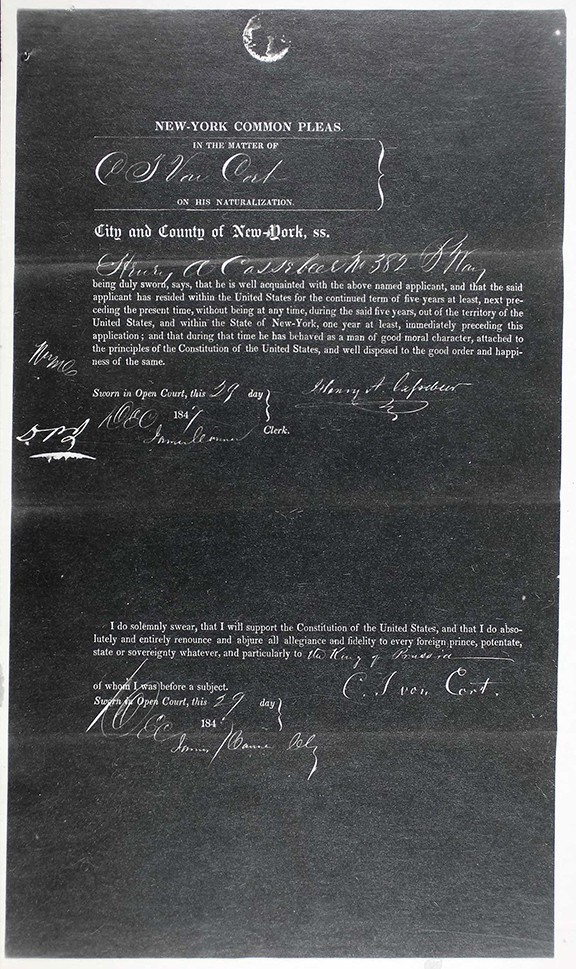 1866: Death of  Dr. C. J. Von Cort of Heart Disease at Morrisania. Funeral services will be held at his late residence, corner of Fordam-ave. and Eighth st., on Sunday, January 14, at 3 o’clock. The relatives and friends of the family are respectfully invited to attend. Members of the Third Hussars please take notice. – New York Daily Tribune, January 13, 1866

Ferdinand Meyer V is a native of Baltimore, Maryland and has a BFA in Fine Art and Graphic Design from the Kansas City Art Institute and School of Design. Ferdinand is the founding Principal of FMG Design, a nationally recognized design consultation firm. Ferdinand is a passionate collector of American historical glass specializing in bitters bottles, color runs and related classic figural bottles. He is married to Elizabeth Jane Meyer and lives in Houston, Texas with their daughter and three wonderful grandchildren. The Meyers are also very involved in Quarter Horses, antiques and early United States postage stamps. Ferdinand is the past 6-year President of the Federation of Historical Bottle Collectors and is one of the founding members of the FOHBC Virtual Museum.
View all posts by Ferdinand Meyer V →
This entry was posted in Advertising, Bitters, Druggist & Drugstore, History, Medicines & Cures, Remedy and tagged adultery, bitters, Bremen, Broadway, Brooklyn, divorce, Elixir, Germany, health, Medicine, New York, physician, pills, Remedy, Restorative, Von Cort. Bookmark the permalink.