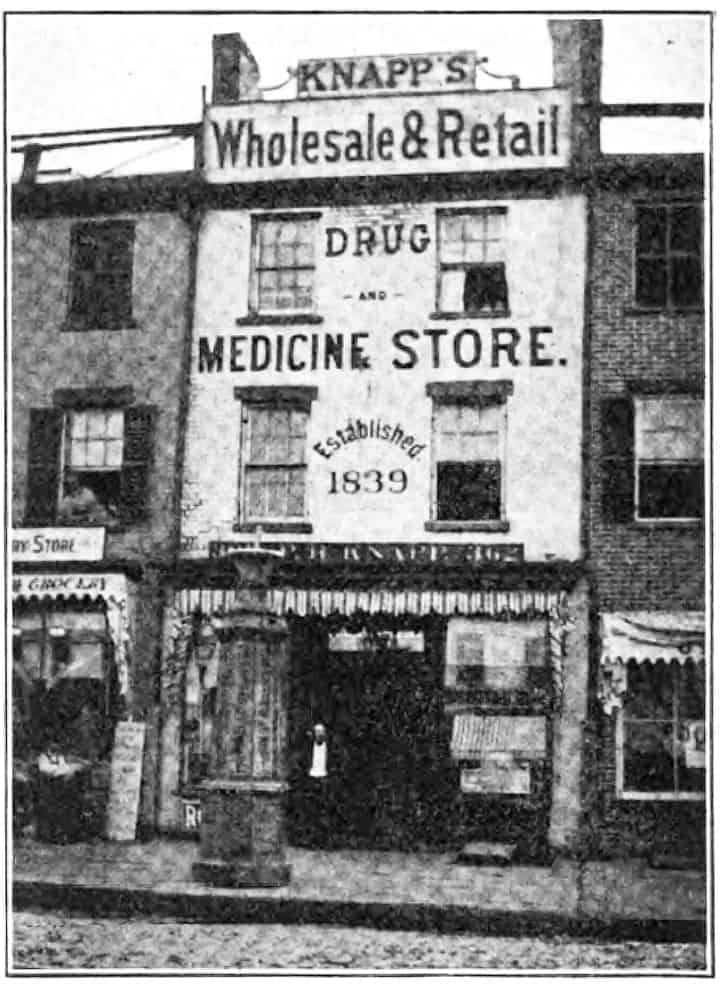 It was widely reported that Peter B. Knapp ran the oldest drug store in New York City at 362 Hudson Street. His Knapp’s Wholesale and Retail Drug Store and Knapp’s Medical Laboratory was established in 1839 when herb remedies were in vogue and prescriptions unknown. He operated the business without interruption until the time of his death, at the age of 89 years, in 1900. After his death, his son Franklin F. Knapp of the Lee Broom & Duster Company in Chicago, came to New York to continue to run the business. He was a graduate of the New York College of Pharmacy, class of 1875. That is Peter B. Knapp standing in the doorway above.

Mr. Knapp also put out Knapp’s Health Restorative Bitters from around 1835 – 1850 as the advertisement below indicates. He sold it for 50 cents per bottle.

What prompted this post was the very similar Restorative Bitters by Charles H. Ring, also from New York City. 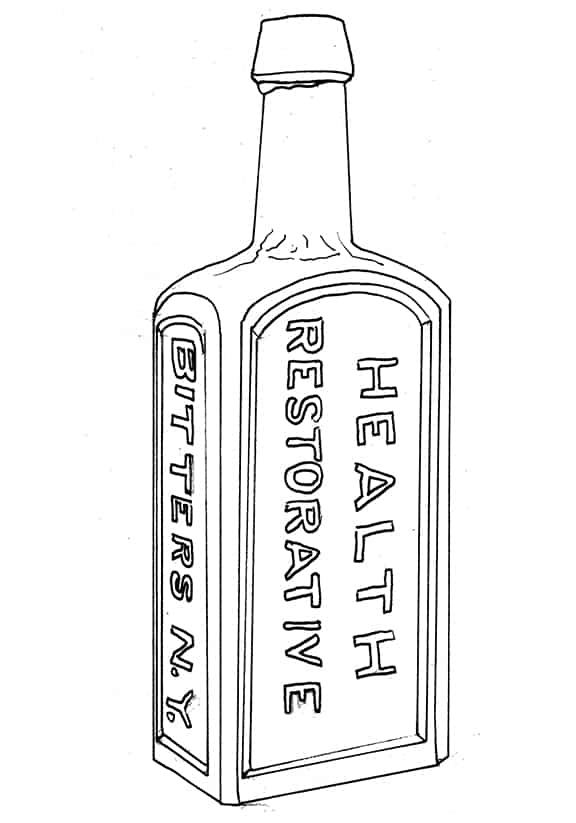 1839: Knapp’s Wholesale and Retail Drug Store was established in 1839.

1900: Peter B. Knapp, one of the oldest retail druggists in New York city, died last month, July 1800 – The Western Druggist

Ferdinand Meyer V is a native of Baltimore, Maryland and has a BFA in Fine Art and Graphic Design from the Kansas City Art Institute and School of Design. Ferdinand is the founding Principal of FMG Design, a nationally recognized design consultation firm. Ferdinand is a passionate collector of American historical glass specializing in bitters bottles, color runs and related classic figural bottles. He is married to Elizabeth Jane Meyer and lives in Houston, Texas with their daughter and three wonderful grandchildren. The Meyers are also very involved in Quarter Horses, antiques and early United States postage stamps. Ferdinand is the past 6-year President of the Federation of Historical Bottle Collectors and is one of the founding members of the FOHBC Virtual Museum.
View all posts by Ferdinand Meyer V →
This entry was posted in Advertising, Bitters, Druggist & Drugstore, History, Medicines & Cures, Tonics and tagged bitters, drug, Druggist & Drugstore, health, Hudson, Knapp, Medicine, New York, Peter, Restorative, store. Bookmark the permalink.