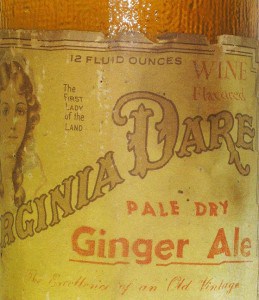 Two earlier PRG posts, one on Bininger’s Knickerbocker Wine Bitters and another more recently, on California Wine Bitters, both started me thinking again; especially when you wondered if there were any surviving Bininger bottles with labels intact. No, I don’t have one, but do have something else wine-related that might be as rare; a Virginia Dare wine-flavored ginger ale from 1947, of which only one other has surfaced. 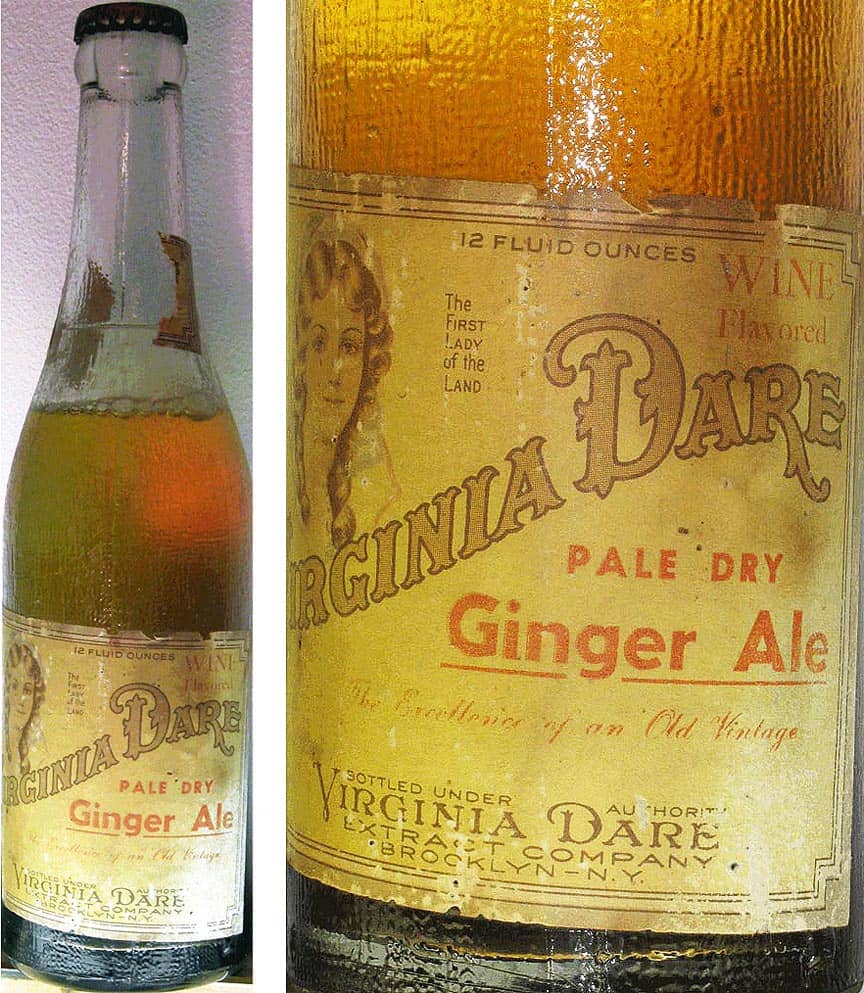 But as usual, there is a story. This mundane bottle of wine-flavored ginger ale might have descended from one of America’s first viable wineries founded in 1835. 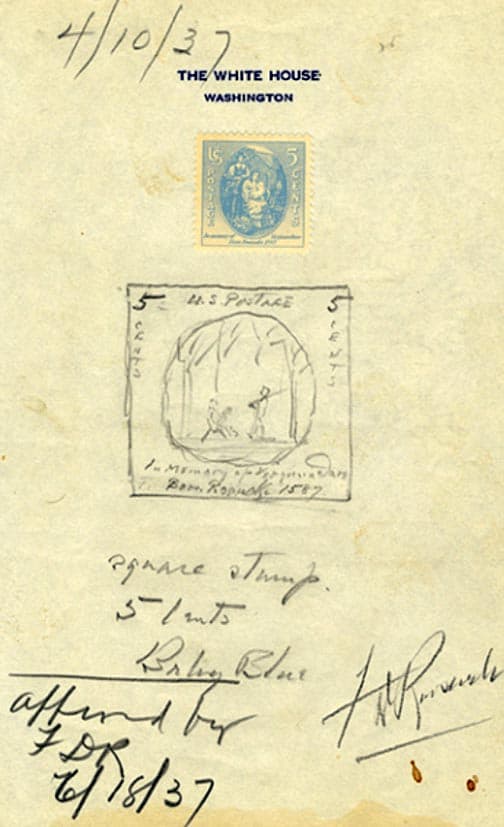 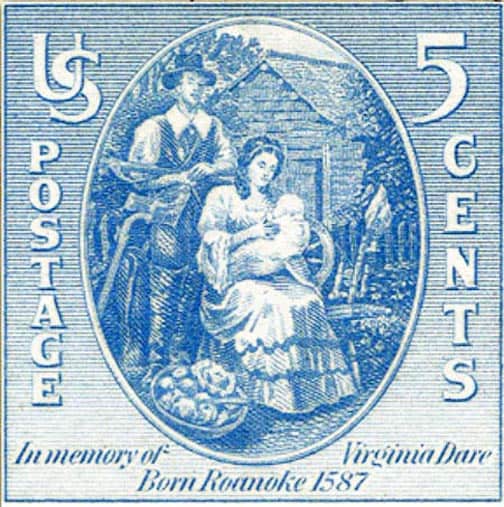 Twenty-four years earlier in 1923, the Virginia Dare Company was formed in New York from a southern wine-making firm; Garrett & Co. The firm had relocated northward as a refugee from the widening Prohibition movement in southern States during the early 1900s. But to make the connection between a 1947 bottle of wine-flavored ginger ale and a winery established in 1835, first we have to go back to 1524.

According to the The North Carolina Department of Agriculture, their state is the “home to our nation’s first cultivated wine grape – the Scuppernong’. Although muscadines thrive in the piedmont and coastal plain of all southeastern states, only North Carolina claims the original native Scuppernong as its own. The Scuppernong is a bronze muscadine. The first recorded account of these grapes occurs in the log book of Giovanni de Verrazano, French explorer and navigator, who discovered them in 1524 in the Cape Fear River Valley. He wrote that he saw, ‘Many vines growing naturally there that without doubt would yield excellent wines.’ “

The North Carolina Department of Agriculture goes on to tell us that following de Verrazano, Sir Walter Raleigh’s explorers, Captains Phillip Amadas and Arthur Barlowe “wrote in 1584, ‘The coast was so full of grapes that the very beating and surge of the sea overflowed them.’

Sir Walter Raleigh’s colony is credited with discovering the famed Mother Vine on Roanoke Island and introducing it elsewhere. It is the oldest cultivated grapevine in the nation at more than 400 years old. During the 17th and 18th centuries cuttings of the mother vine were placed into production around a small town called Scuppernong in Washington County and along the Cape Fear River east of Fayetteville.” 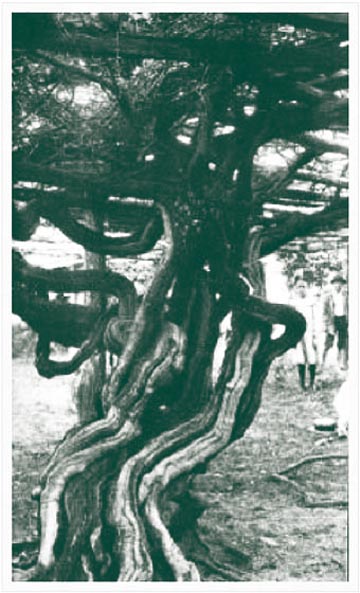 The “Mother Vine” on Roanoke Island – Image from Sallie Southall Cotten, The White Doe or the Fate of Virginia Dare (1901).

Along with discovering that ‘mother cutting vine’, Raleigh’s colony managed to bear other fruit, namely Virginia Dare who was born on Roanoke Island in 1587 as the first English child in the “new world”. Her mother was Eleanor Dare, the daughter of John White, governor of the colony. Raleigh was forced to go back to England to resupply the colony and when he returned in 1590, it had vanished, along with Virginia. The legend is the only thing left except the ‘Mother Vine’ and the Virginia Dare Company, both of which are still going strong.

Leaping forward 200 years in the story, enter Sidney Weller, an American born in 1791 in New York. Moving south to Brinkleyville, North Carolina in 1829, he purchased 300 acres of farmland. By 1835 he had established a vineyard he called Medoc after the famous French wine region in Bordeaux. Five years later, the winery was the largest in North Carolina and claimed to be the leading wine producer in America. (No doubt Californian wine historians may question that.) In any case, Weller distributed his wine throughout the eastern states. In 1850 Weller was cultivating over 200 varieties, but his focus was on the native Scuppernong grape. 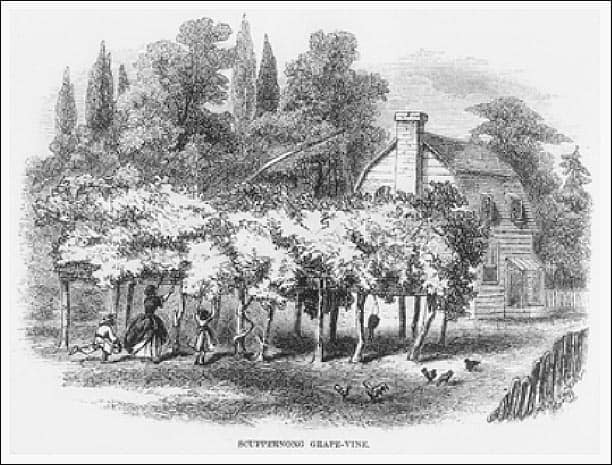 Scuppernong grape arbor beside a dwelling in northeastern North Carolina as depicted in an 1859 engraving. – Courtesy of North Carolina Collection at UNC-Chapel Hill

In 1865 the Garrett family entered the wine business when brothers Francis and Charles purchased the flourishing North Carolina Medoc Vineyard. Francis’s son Paul Garrett (1863-1940) began work in the family’s vineyards when he was thirteen; eventually moving up to become winery sales manager. 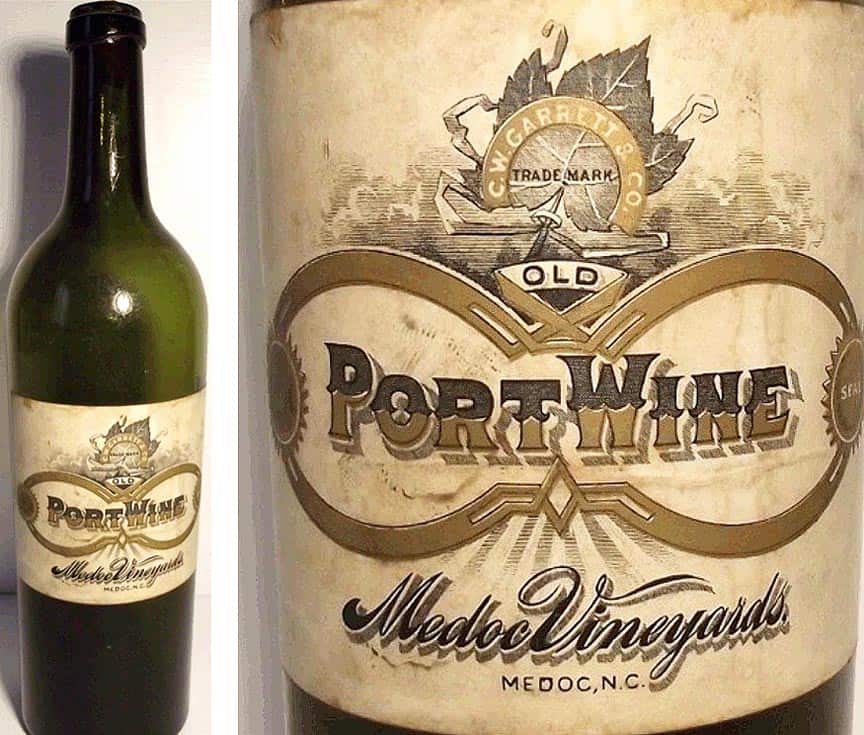 In 1900 at age 37, Paul Garrett left to establish his own winery in Littleton, North Carolina and ultimately became an immensely successful winemaker and grape grower. As North Carolina was heading toward being a ‘dry’ state, Garrett moved his business northward to Norfolk, Virginia where he produced a grand prize-winning wine for the 1904 Louisiana Purchase Exhibition. He began using Virginia Dare as the brand name for his wines. 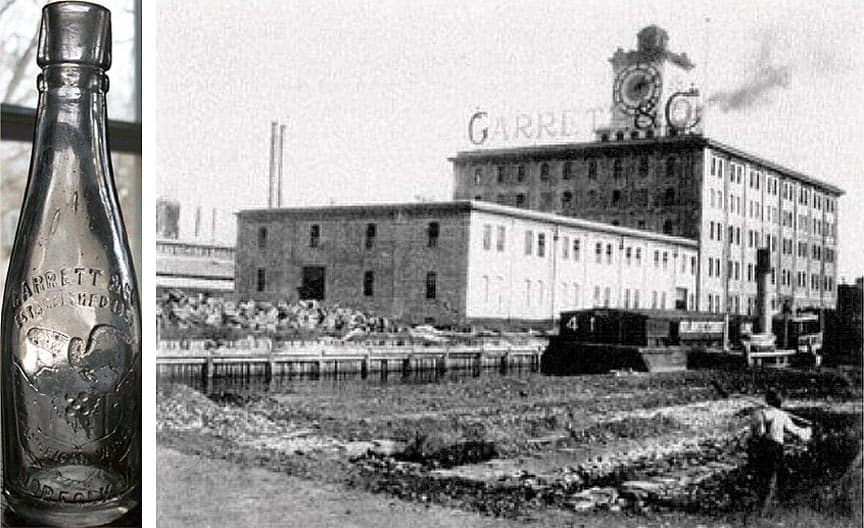 Left: Early Garrett bottle after the move to Norfolk, Virginia –  ebay, Right: Garrett claimed the Virginia Dare clock on his Norfolk winery roof was the largest in the world. – Courtesy Huntington Library. 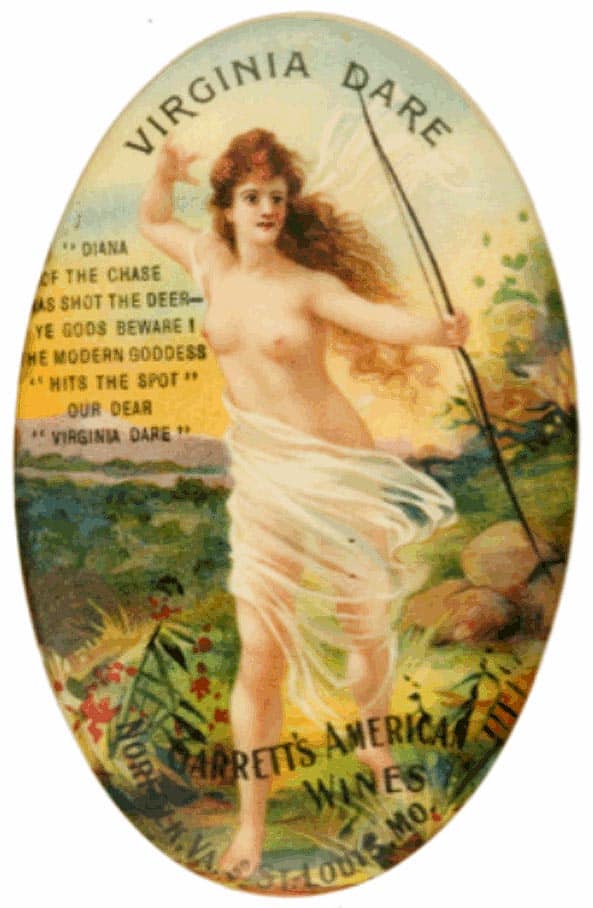 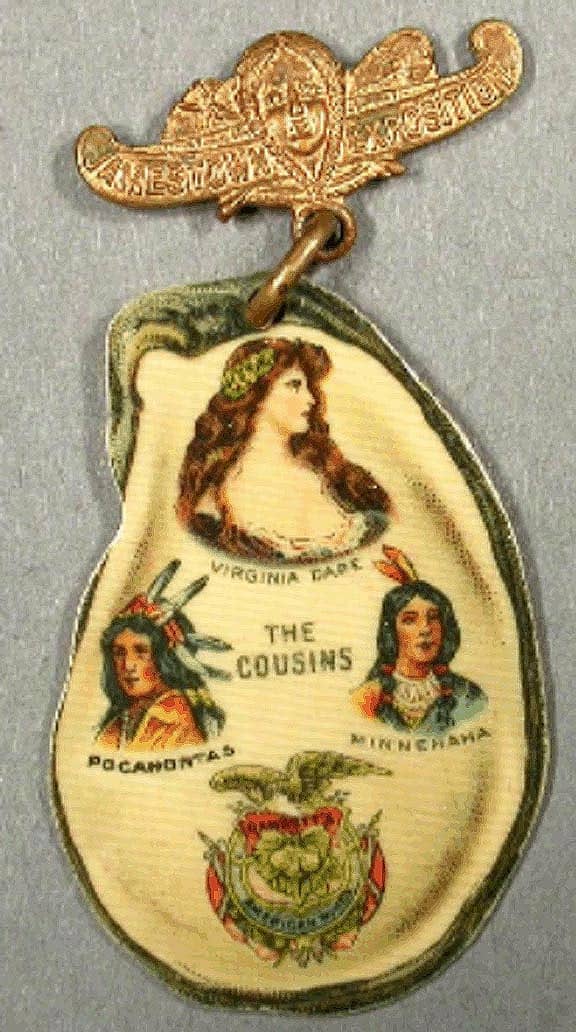 Advertising pin for Garrett & Company made for the Jamestown Exposition of 1907 in Norfolk. The front features images of Pocahontas, Virginia Dare and Minnehaha (described as “The Cousins”) and a crest for Garrett’s American Wines. An image of the Virginia Dare clock atop the Garrett and Co. building is on the back. The back also reads “Take Berkley ferry in Norfolk, Va.” – Courtesy Smithsonian Institute

Garrett created a country-wide wine business which today we might have called a ‘cartel’. He bought all the Scuppernong grapes he could find, paying high prices to outbid competing wineries; thus cornering the market in the south Atlantic states. According to Roger’s Grapevine, Garrett & Company went on to add “facilities in Missouri, and in 1911 bought their first Pacific coast vineyards in Cucamonga California. Vineyards followed in the Finger Lakes district of New York, and with Prohibition advancing to Virginia in 1917, a move of the company’s headquarters to the town of Penn Yan, NY followed.” The Garrett winery building from this period is being restored by the town.

By the time of national Prohibition, Virginia Dare brand wine was selling 1,000,000 cases a year and was the most popular bottled wine in the country. In 1919, Garrett & Co. was forced to limit the alcohol content of its wine. Garrett decided to utilize the extracted alcohol to manufacture flavorings. Under the leadership of Dr. Bernard H. Smith, a noted flavor chemist, Garrett & Co. produced a line of flavoring extracts carrying the name Virginia Dare. When the company’s extract business took off, the Virginia Dare Extract Company was incorporated in 1923 with headquarters in Brooklyn, New York. 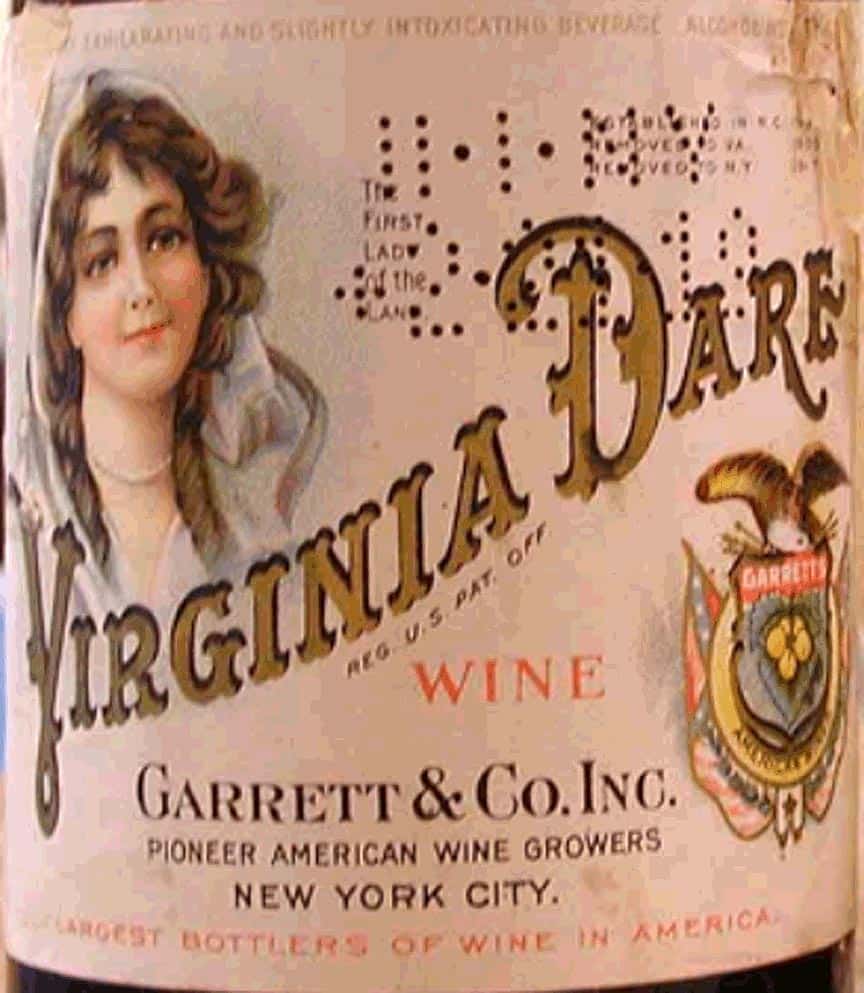 This label appears to be from just before 1920. At the top of the label it reads: “. . . slightly intoxicating beverage. . .” The 1947 bottle label borrowed most of this design and typography.

During Prohibition, Garrett retained his vast empire of vineyards, selling grapes by the ton for the home winemaking market which was legal under the law. Finally in 1933 with the repeal of Prohibition, Garret and his Virginia Dare Company were almost instantly ready to resume where they left off and continue national dominance in popularity for both their red and white wines.

These labeled corkers probably date from the close of Prohibition in 1933 or just after. Although the left hand example shows a 19.5% alcohol content, Prohibition law had allowed a 22% alcohol wine to be sold as ‘medicinal’, and religious ceremonial wines were permitted also.

This almost brings us back to where we started with the bottle of wine-flavored ginger ale. While we still don’t know what really prompted Virginia Dare to make a wine-flavored ginger ale in 1947, we did learn that Paul Garrett certainly was a master promoter and salesman, and indeed a pioneer in American winemaking and grape-growing. His entrepreneurial spirit was part of the development and history of wine in America. However, the claim he embossed on his bottles as being founded in 1835 is a good story, but like most history, it had a few holes along the way.

On the other hand, it is entirely true that my Virginia Dare wine-flavored ginger ale bottle can legitimately claim its roots are in the earliest history of grapes and wine in America.

Note: There are many, many renditions of the historical accounts above, so I’m sure that one might find holes in my compilation as well.

Some of the more interesting and dependable references for those interested. No mentions of ginger ale, though. . .

Pinney, Thomas. A History of Wine in America: From the Beginnings to Prohibition.

Fortune magazine article 1934 “Can wine become an American habit?” A dated piece to be sure, but includes an interview with Paul Garrett in his Manhattan apartment.