David also mentions the effects radiation has on bottles containing selenium. “Clear glass that was originally decolorized by using selenium as the active ingredient instead of manganese (the use of selenium was particular prevalent in the 1920s and 1930s and later) may turn strange shades of “burnt amber” or “smoky dull dark brown” under irradiation. . .” 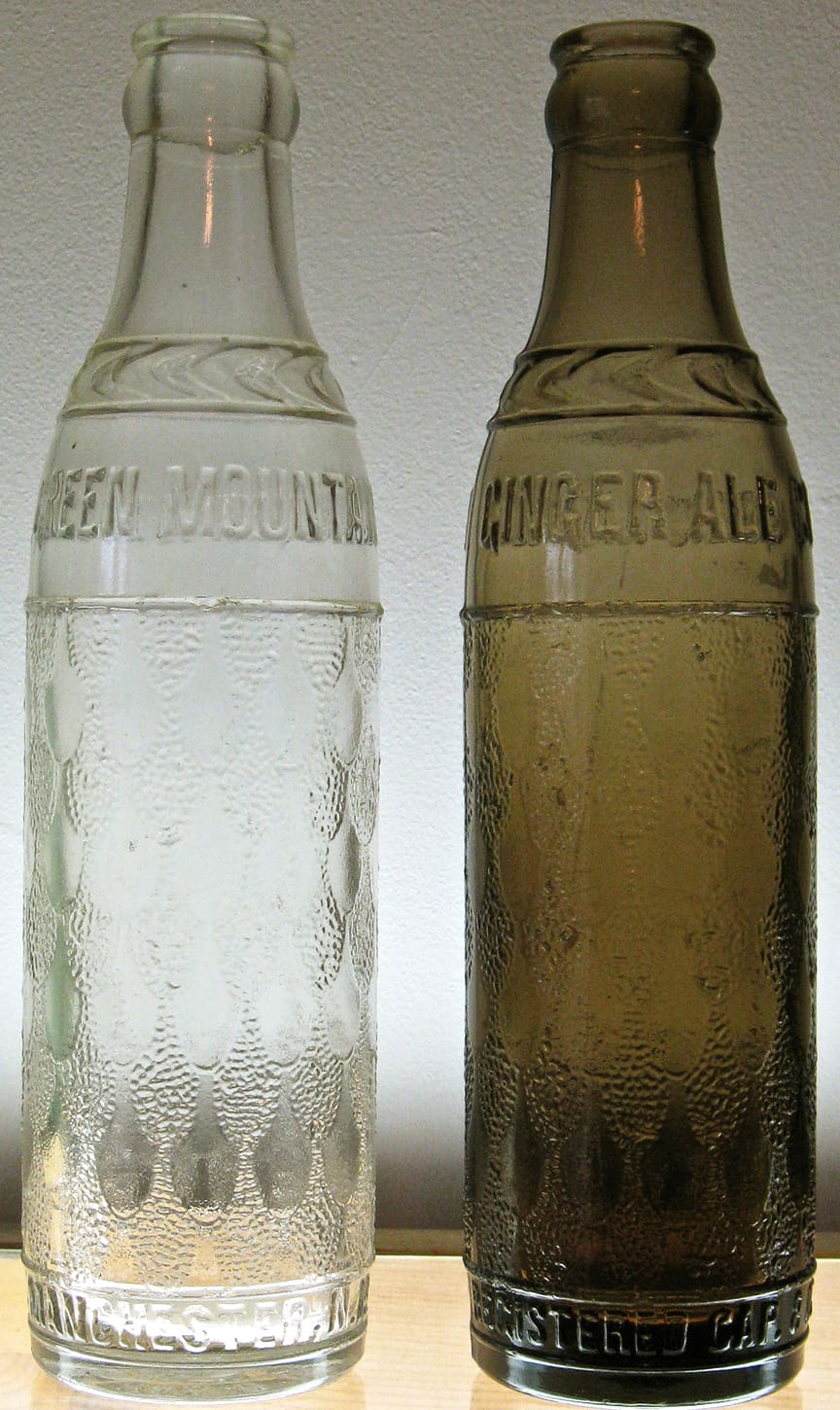 Here’s an Art Deco example from the late 20s or early 30s made by the F. E. Reed Glass Company, Rochester, NY (ginger ale, of course). Green Mountain Ginger Ale Company, Manchester, NH (a noteworthy location in July 2013). The irradiated bottle (on right) was a gift from Carl Pratt a few years ago.

In his article, David describes the un-articifical way clear glass will turn purple: “Glass containing enough manganese may naturally slowly turn some shade of very light to medium purple after several years of exposure to the rays of the sun.” Bottles with selenium content from the same period can have a subtle overall tint in a light yellowish brown or “straw” color, which I believe is a result of the same natural process David describes for “sun-colored amethyst”. They are not very common (or perhaps overlooked), and I don’t know how long it takes for the chemical change to take place. Anyone for “sun-colored straw”?

A long time southern collector I knew for many years (now passed on), was fond of selling irradiated bottles. He was very strict in labeling the bottles and clearly telling buyers that the bottles had been altered and were not the original color. I asked him one day how he turned his bottles. Here’s the story pretty much as he told it:

From clear to purple or brown that’s how irradiation runs. . . whether by machine or by sun.

Ferdinand Meyer V is a native of Baltimore, Maryland and has a BFA in Fine Art and Graphic Design from the Kansas City Art Institute and School of Design. Ferdinand is the founding Principal of FMG Design, a nationally recognized design consultation firm. Ferdinand is a passionate collector of American historical glass specializing in bitters bottles, color runs and related classic figural bottles. He is married to Elizabeth Jane Meyer and lives in Houston, Texas with their daughter and three wonderful grandchildren. The Meyers are also very involved in Quarter Horses, antiques and early United States postage stamps. Ferdinand is the past 6-year President of the Federation of Historical Bottle Collectors and is one of the founding members of the FOHBC Virtual Museum.
View all posts by Ferdinand Meyer V →
This entry was posted in Advice, Collectors & Collections, Color, Ginger Ale, Questions, Scams & Frauds, Soda Bottles, Soft Drinks, Technology and tagged Ale, brown, Ginger, green, irradiation, manganese, Mountain, purple, selenium. Bookmark the permalink.

2 Responses to From clear to purple or brown, that’s how irradiation runs