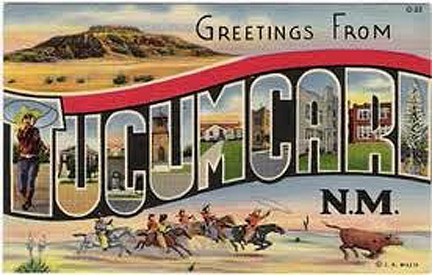 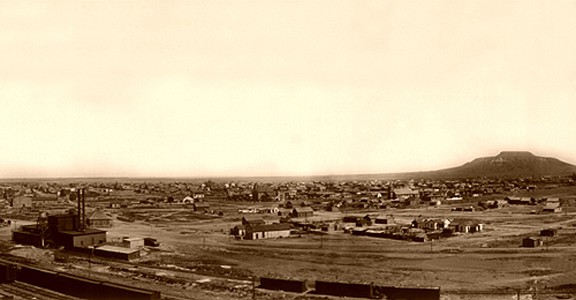 I thought I would try to find some unlisted western bitters today.

but wow, what a great name, ‘Hungarian Blackberry Juice and Wild Cherry Bitters!’

I’m not quite sure what I found in a New Mexican newspaper. The December 15, 1906 Tucumcari News (Tucumcari, New Mexico) had an advertisement (see below) for a bitters on page 11. There is no evidence they bottled it, but wow, what a great name, ‘Hungarian Blackberry Juice and Wild Cherry Bitters!’

OK, maybe they were selling a juice and a bitters. Not really sure. If this was someone else’s bitters, I would think they would state the brand. They often referred to brands of whiskey or beer in other advertisements.

I believe this is a picture of the K.C. Saloon with the Legal Tender Saloon next door (see below). The web site I found the picture on thought it was a different town in New Mexico.

An early nickname for the town was “Six Shooter Siding” due to it being next to a railroad and having numerous gunfights. 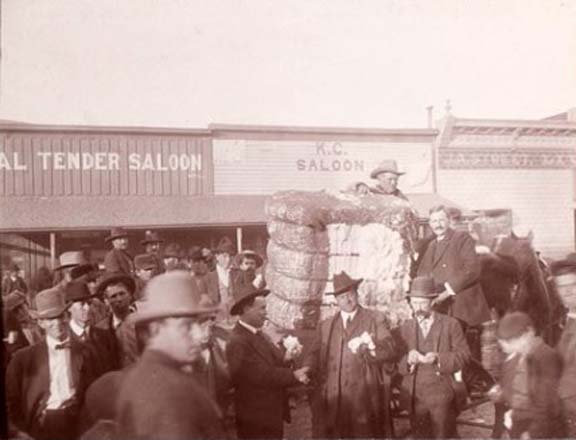 Possibly La Luz, New Mexico: Photograph of men out front of the Legal Tender and K.C. Saloon. Most are in hats and jackets. – Vinegar Collection

However, I found both saloons listed as Tucumcari businesses in the June 23, 1906 Tucumcari News. Interestingly, there was both a Legal Tender Saloon and a Legal Tender Barbershop. Tucumcari was founded in 1901 and is in Quay County, New Mexico. An early nickname for the town was “Six Shooter Siding” due to it being next to a railroad and having numerous gunfights.

The December 28, 1907 issue of Tucumcari News had advertisements for both saloons on page six (see below). 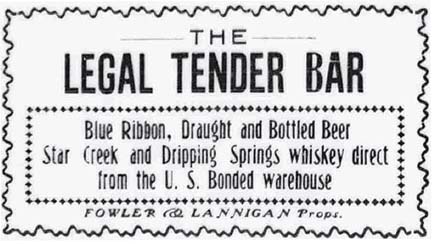 There were many advertisements for, and references to, the K.C. Saloon over the years. The bitters was listed for about a year. They seemed to have had to make a lot of improvements. Perhaps they had rowdy clientele. The first newspaper that I saw the K.C. Saloon in was from April 14, 1906. It was announced they were ‘open for business’ (see below).

In the June 30, 1906 issue, I saw where someone lost their gold ring at the saloon (see below). I wonder what Ruby was up to? I suspect too much Hungarian Blackberry Juice and Wild Cherry Bitters were had the night it was lost!

Around that time there was a prostitute named Ruby that killed another prostitute with scissors.

I did try to look for a “Curt and Ruby” but found nothing definitive. Around that time there was a prostitute named Ruby that killed another prostitute with scissors. This all happened a week after the ring was reported missing. It happened over at the Red Light Saloon where the girls worked (read below). However, the murdering Ruby, was married to someone named Joe Estes. I suppose the missing ring may not have been a wedding ring as I first assumed. 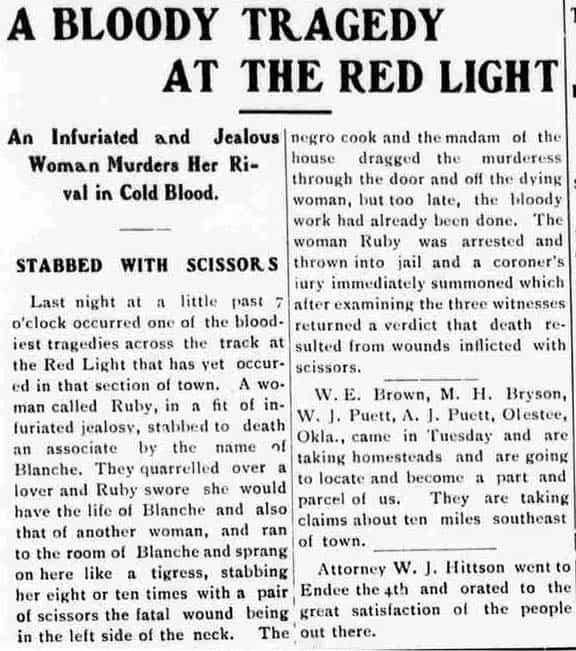 Despite eye-witnesses to the murder, Ruby admitting to stabbing the woman, and her own testimony “Well I was intoxicated; I was dazed and crazy and everything”. She somehow was acquitted (read below). 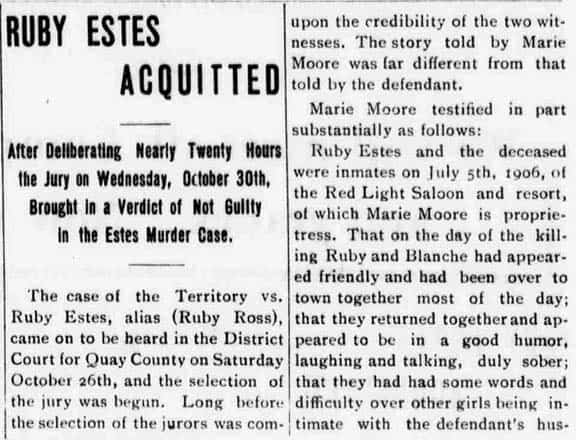 Anyway, back to the K.C. Saloon. The December 29, 1906 newspaper indicated that a T. A. Wayne bought both the K.C. and Legal Tender Saloon buildings (read below). He had plans for a future building on the spot. It said he intends to erect a “good building”. So that brings to question… what type of building was there when he bought it? These often mentioned improvements make more sense. I can see him saying “Well boys, we’re thinking of adding us some walls real soon.” 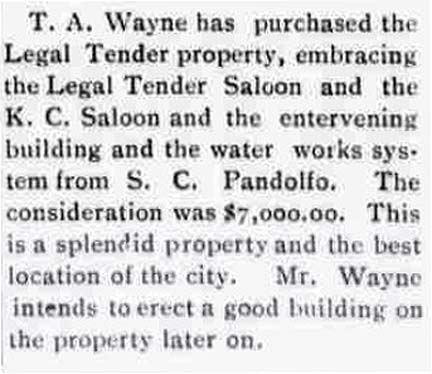 I could not find out a lot on Mr. Wayne. He had moved to New Mexico from Crosby County Texas in 1903. He was quoted as saying when he moved from Texas that there were “very few inhabitants and no towns of any size”.

I guess the big city of ‘Six Shooter Siding’ was a step up. I did see where T. A. Wayne served on the board of county commissioners. He had the job of making sure saloons were closed on the day of voting for ratification of the state constitution in 1911. Seems a conflict of interest to me.

The January 19, 1907 Tucumcari News (read below) showed Patty and May as new proprietors.

Patty and May as new proprietors – Tucumcari News, January 19, 1907

Did Mr. Wayne give up on his plans after only one month? They actually refer to a Wm. Patty being proprietor before. Perhaps Mr. Wayne owned the building and they ran the business? The first “May” appears to have been a William May and the second was Silas Richman May Sr. The “Patty” might be William Patty. Is the man in this advertisement one of them? (see below) Or maybe it is Curt still looking for that ring?

A year later Patty and May had a run in with the law. They decided to test a new gambling law by having slot machines. It looks like Patty and May were both arrested (read below).

Patty and May Arrested for use of Slot Machines – Tucumcari News, January 18, 1908

Allen Highfil bought an interest in the K.C. Saloon around February 1, 1908. (read below) It was claimed he “is now measuring the goods to the boys who occasionally are affected with a dryness”.

The March 14, 1908 Tucumcari News advertisement below listed May and Highfil as proprietors. Perhaps it was Patty’s bright idea earlier on the slot machines, and he was ousted. 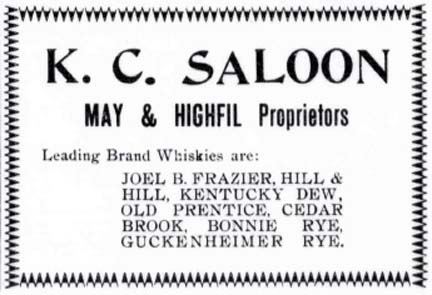 Silas May had a lengthy article + (rest of article) “Anti-Prohibition League Makes an Appeal to Citizens” October 7, 2010.

Criminals seem to have a good track record in this town from the articles I have read.

Silas sold the saloon to Billie Loman on April 1, 1911. In 1919, Silas was found guilty of letting a game of chance on his premises. He must have had a new place. In November 12, 1920, prohibition officers raided Silas May’s house and 9 cases of whiskey were seized. He took them to court and was able to get his whiskey back. Criminals seem to have a good track record in this town from the articles I have read. 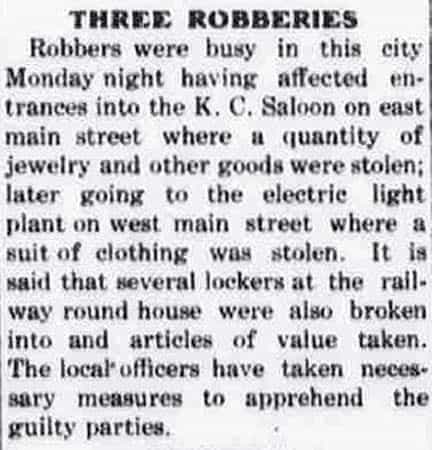 The last reference I have to the K.C. Saloon (see above) was that it was robbed on December 24, 1914. I just hope the burglars took some back bar bottles labeled “Hungarian Blackberry Juice and Wild Cherry Bitters – Tucumcari, New Mexico Territory” and buried them somewhere safe for future diggers.

Ferdinand Meyer V is a native of Baltimore, Maryland and has a BFA in Fine Art and Graphic Design from the Kansas City Art Institute and School of Design. Ferdinand is the founding Principal of FMG Design, a nationally recognized design consultation firm. Ferdinand is a passionate collector of American historical glass specializing in bitters bottles, color runs and related classic figural bottles. He is married to Elizabeth Jane Meyer and lives in Houston, Texas with their daughter and three wonderful grandchildren. The Meyers are also very involved in Quarter Horses, antiques and early United States postage stamps. Ferdinand is the past 6-year President of the Federation of Historical Bottle Collectors and is one of the founding members of the FOHBC Virtual Museum.
View all posts by Ferdinand Meyer V →
This entry was posted in Advertising, Bitters, History, Liquor Merchant, Questions, Spirits, Whiskey and tagged bitters, Blackberry, cherry, Curt, Hungarian, juice, K.C. Saloon, legal, May, New Mexico, Patty, Richman, Ruby, Saloon, siding, six-shooter, tender, Tucumcari, Viguerie, Wayne, Whiskey, wild. Bookmark the permalink.