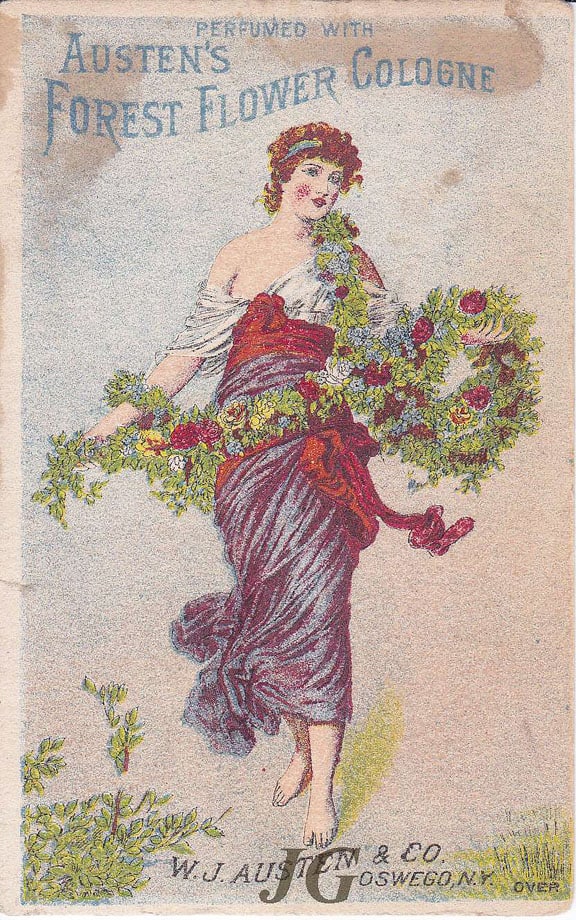 I like trying to imagine the lives of some of the people I am researching. I mean, of all the people in the world, how did one bitters brand come to be associated with one individual throughout an entire lifespan? How is a bottle I am interesting in, relate to and intersect with a man who was a farmer, messenger, teller, bookkeeper, treasurer, clerk, druggist, brewer and bank president? I also wonder, if I was living in the latter part of the 1900s, would I have put out a Meyer’s Bitters? Probably so!

Today’s post was inspired by trade card authority Joe Gourd (Chicago, Illinois) where he baited me with images of a rare card (pictured in this post) and said, “Got one more King’s Bitters to add to your list. It is a K 54, ‘King’s Liver and Kidney Bitters’. The card is not in such great shape, but can be proud of it’s Chicago connection.” 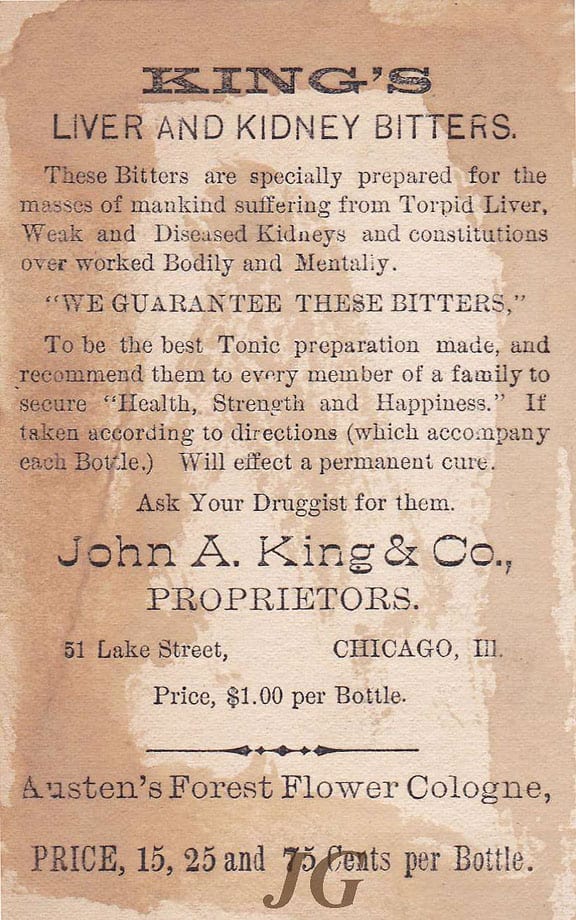 Looking at the front and back of the card, I see a draped women carrying a wreath and strand of roses with copy marketing Austen’s Forest Flower Cologne, W. J. Austen & Co., Oswego, New York. I think I will save that cologne for another post as on the back I see the name, John A. King & Co., 51 Lake Street, Chicago, Illinois. The brand he is marketing is King’s Liver and Kidney Bitters.

John A. King was born in DeWitt Township in Onondaga County, New York and was the son of Ingron L. and Hannah (Hadley) King, also of New York though his mother may have been from Vermont. John was reared on a farm and at the ripe young age of 15, entered employment at a grocery firm in Syracuse, New York and quickly moved on to be a messenger and teller at Mechanics’ Bank of Syracuse. This is interesting as he would later be a bank president! From 1859 to 1861, John was a bookkeeper and later a treasurer at S.M. Nicholson & Company, distillers in Toledo, Ohio. This experience would lead him to the retail and wholesale area of the grocery and drug business.

Around 1865, King went to work with Samuel A. Tolman at Tolman & Pinkham and then became a partner in Tolman, Crosby & Co. when the firm turned from groceries to the wholesale drug trade. From 1869 to 1882 King was a partner at Tolman & King, working at 51 Lake Street in Chicago. In 1882, Tolman would sell out to King and the firm became John A. King & Co. They were noted as druggists. This would be when the King’s Liver and Kidney Bitters was sold. Unfortunately, as far as I know, no bottles exist. Hopefully, someone will prove me wrong.

King was a Democrat and was a trustee with the Chicago Sanitary District. He belonged to the Illinois, Iroquois and Union League clubs while he resided at 431 Ashland Boulevard. His wife was Julia L King. They had two children, Nellie and Agnes. He lived a full life and he had his own bitters.

1849: entered employment at grocery firm of Syracuse at 15., later messenger to teller Mechanics’ Bank of Syracuse.

Ferdinand Meyer V is a native of Baltimore, Maryland and has a BFA in Fine Art and Graphic Design from the Kansas City Art Institute and School of Design. Ferdinand is the founding Principal of FMG Design, a nationally recognized design consultation firm. Ferdinand is a passionate collector of American historical glass specializing in bitters bottles, color runs and related classic figural bottles. He is married to Elizabeth Jane Meyer and lives in Houston, Texas with their daughter and three wonderful grandchildren. The Meyers are also very involved in Quarter Horses, antiques and early United States postage stamps. Ferdinand is the past 6-year President of the Federation of Historical Bottle Collectors and is one of the founding members of the FOHBC Virtual Museum.
View all posts by Ferdinand Meyer V →
This entry was posted in Advertising, Bitters, Cologne, Druggist & Drugstore, Ephemera, History, Medicines & Cures, Tonics, Trade Cards and tagged Austen, bitters, chicago, cologne, Druggist & Drugstore, flower, Forest, Gourd, illinois, kidney, king, Liver, Tolman. Bookmark the permalink.