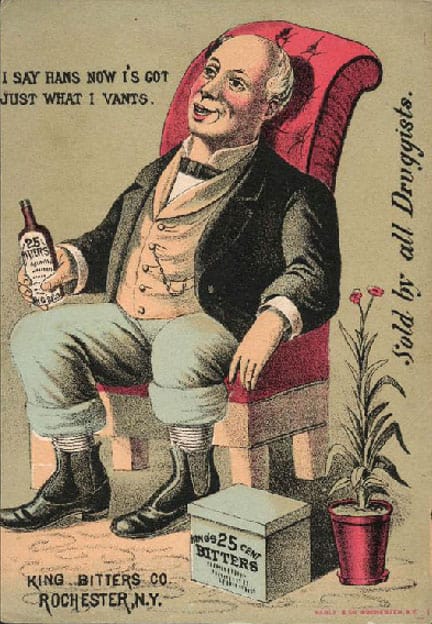 I developed a post the other day on King’s Hop Bitters which reminded me of my aqua, King’s 25 Cent Bitters. I suspect there might be a marketing relationship between the English and United States ‘King’ brands. If not, we are talking about somebody with the last name ‘King’ in Rochester, New York around 1880. Sounds easy enough, right? 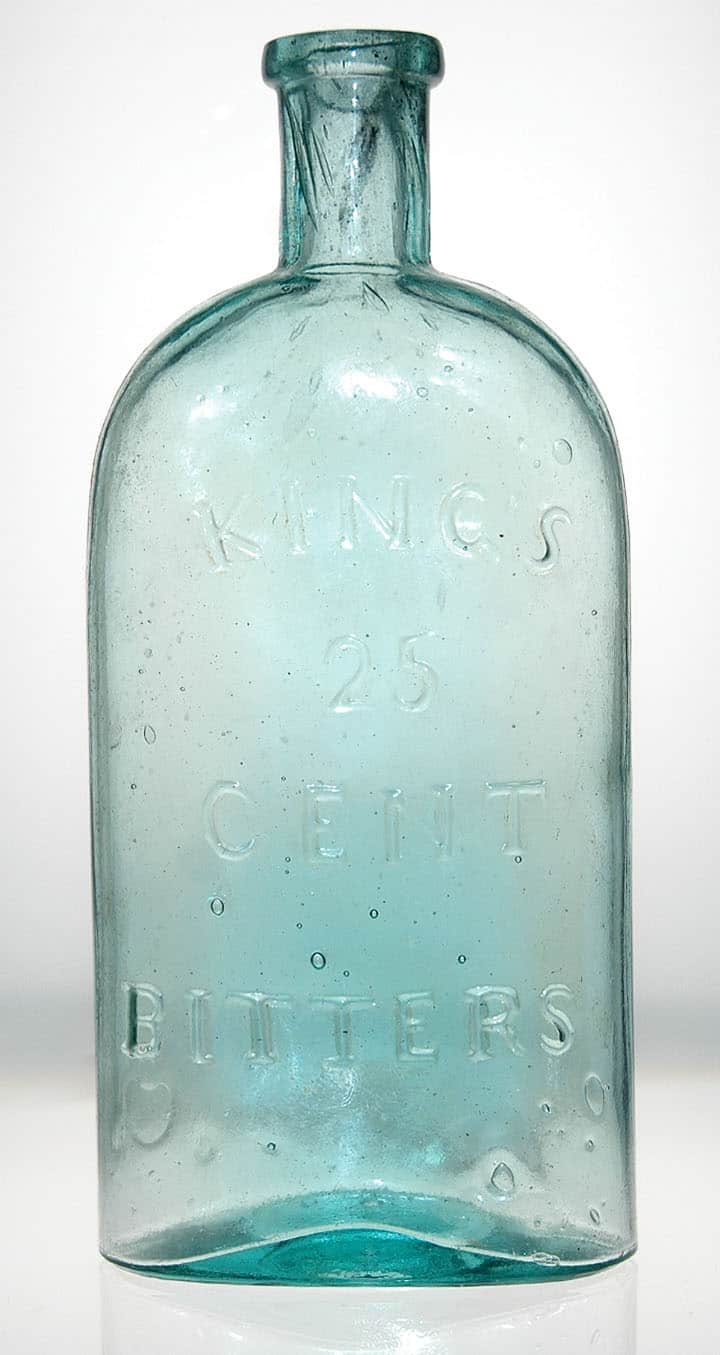 What is a bit challenging here is finding out who this ‘King’ is. You would think that by looking at the trade cards there would be listings in various Rochester City Directories for a King Bitters Company. That is not the case. I looked at a dozen or so directories with no luck. I did come across the following passage that leads me to think we might be talking about Moses Bradford King.

The collection includes the personal papers and correspondence of the Bradford King family of Rochester. Among the papers are the diaries of Bradford King, the son of Gideon King who settled near Rochester in 1797. Bradford left this area after his father’s death in 1798, but returned many years later.

The diaries cover the period from June, 1811 to April, 1874. During some years the entries are scattered or very brief; in others the notes are voluminous. Included in the correspondence are four volumes of letters from Bradford King to his brother Moses King. Also in the collection are the diaries and personal papers of Moses Bradford King, son of Bradford King, who was a prominent Rochester druggist. Moses Bradford King wrote and published a pamphlet which advocated changes in the calendar for the twentieth century.

Much of the correspondence consists of letters written between the two daughters of Moses B. King, Ella G. King and Ada M. King. For a time Ella and Ada King operated the King Seminary for Young Ladies and Children in Rochester. When the school closed, Ella King went west and taught in an Indian school in South Dakota. Ada remained in Rochester where she tutored high school and college students. In 1944, at the age of 80, she enrolled for courses at the University of Rochester extension school, becoming the University’s oldest co-ed. She died at the age of 100 in 1964.

Now when I search for Moses B. King and Moses Bradford King I find similar listings in Rochester directories such as the listing below. I even find listing from 1861 -1863 where Moses is listed as a druggist (see timeline below) 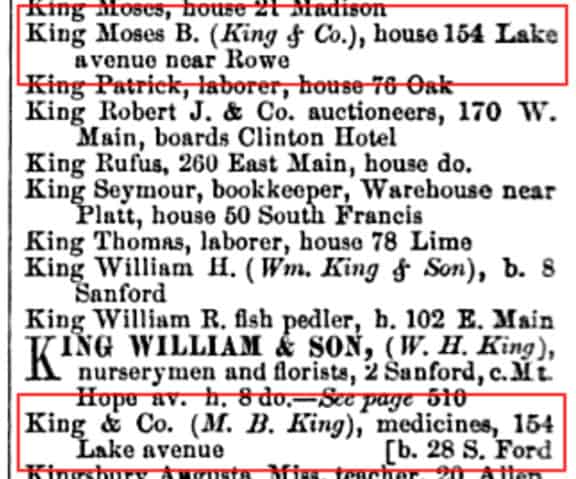 Listings for Moses B. King and King & Co. in 1872 Rochester City Directory. Could this be our King?

I also come across a booklet mentioning a J. T. King & Co. in Rochester. Unfortunately, I can not tie these ‘Kings’ to the brand. Maybe some of the New York detectives can help here? 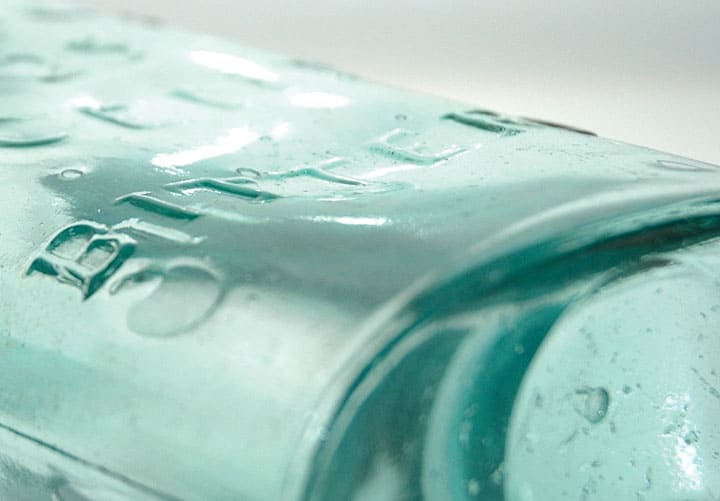 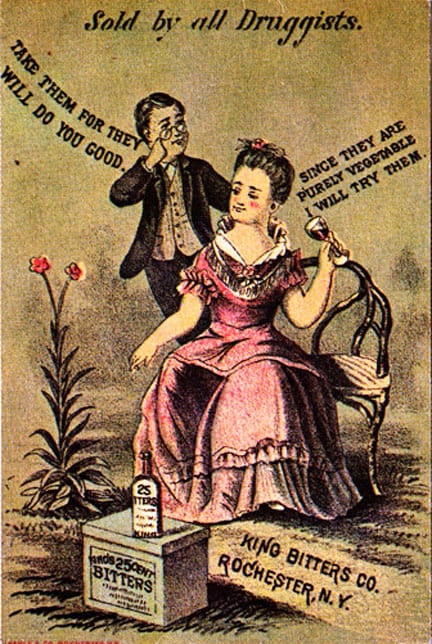 1798: Bradford and Moses King, Dr. Stone, ____ Graham, and four brothers by the name of Rowe, settled in the neighborhood. The country was very sickly, and many deaths occurred. Asa Rowe died soon after coming in and his brothers were so sick at the time as to be unable to go for help to lay him out and bury him until he had been dead twenty-four hours. After recovering from their sickness they returned to Oneida County. The first settlers procured their first boards by repairing the old Allan saw mill at the Falls, but within a few years Nathaniel Jones built a saw mill on a small stream that flows into the river near the Landing. Dr. Zacheus Colby and Dr. Sylvester Atchinson were early physicians in this town. The first marriage was that of Thomas Lee and a daughter of William Hencher.

Ferdinand Meyer V is a native of Baltimore, Maryland and has a BFA in Fine Art and Graphic Design from the Kansas City Art Institute and School of Design. Ferdinand is the founding Principal of FMG Design, a nationally recognized design consultation firm. Ferdinand is a passionate collector of American historical glass specializing in bitters bottles, color runs and related classic figural bottles. He is married to Elizabeth Jane Meyer and lives in Houston, Texas with their daughter and three wonderful grandchildren. The Meyers are also very involved in Quarter Horses, antiques and early United States postage stamps. Ferdinand is the past 6-year President of the Federation of Historical Bottle Collectors and is one of the founding members of the FOHBC Virtual Museum.
View all posts by Ferdinand Meyer V →
This entry was posted in Advertising, Bitters, Collectors & Collections, Druggist & Drugstore, History, Medicines & Cures, Questions, Trade Cards and tagged bitters, Bradford, cent, Gideon, Gourd, king, Meyer, Moses, New York, Rochester, Stebbens. Bookmark the permalink.