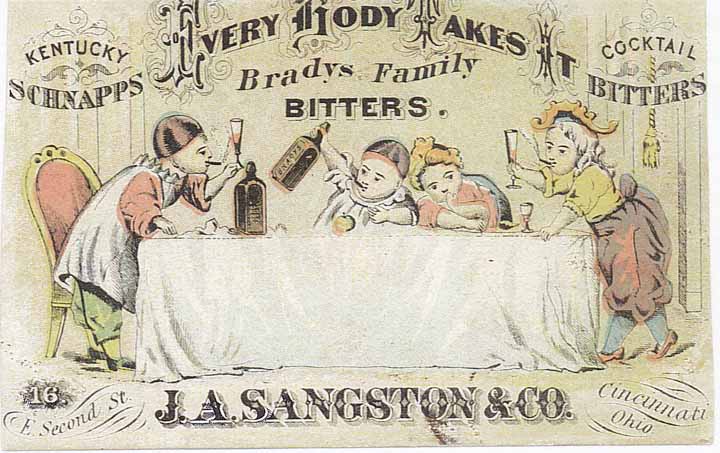 Bitters trade card collector Joe Gourd (Chicago, Illinois), forwarded the image of the top trade card for Brady’s Family Bitters suggesting possibly that J. A. Sangston & Company in Cincinnati, Ohio was producing and distributing the brand. This quite amusing illustration of a family getting blitzed on Brady’s ‘Family’ Bitters while smoking cheroots epitomizes the absurd marketing of bitters products during this time period. When you have a family this happy, who needs food? Every Body Takes It, as their marketing slogan says!

Joe added with his e-mail picture:

While I don’t have a trade card in my collection for this bitters, I do have an image of a trade card that I obtained from the collection of John Kemler in my “wanted” database. It’s interesting that the information on the card would lead one to think that the bitters were manufactured in Cincinnati, Ohio by J. A. Sangston & Co. Is this another mystery? 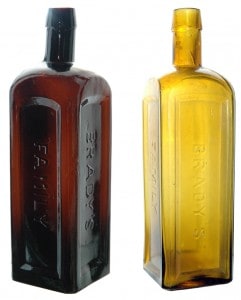 Brady’s Family Bitters was manufactured by D. C. Brady in Louisville, Kentucky. The brand was being shipped to many places and even advertised and sold big time in Houston, Texas. (Read: What was here, Early Houston Advertisements – Part II. I have also found records documenting crates of bottles being on manifests of trains and boats arriving in St. Louis where Charles P. Wiggins and his brother Henry, were heavily marketing and selling Brady’s Bitters from 1869 to 1872 or so.

The Cincinnati, Ohio trade card for J. A. Sangston is interesting. It could be that the Brady’s formula was used by Sangston to make Brady’s Family Bitters on premise or most likely, it all came out of Louisville to the various Brady’s agents around the country. I suspect the latter. I event see records of Brady’s bottles being found in Australia!

Here are a couple of references to Brady’s Family Bitters being received and sold in St. Louis by Charles P. Wiggins & Bro. 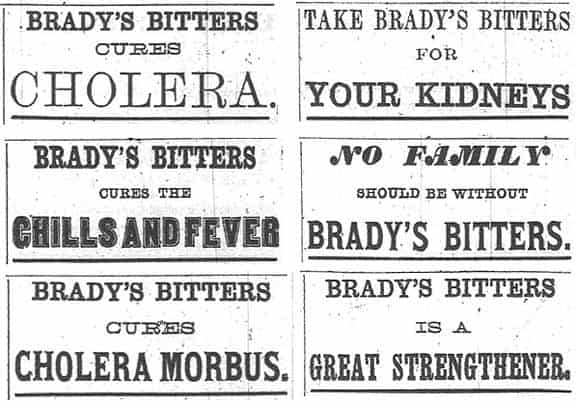 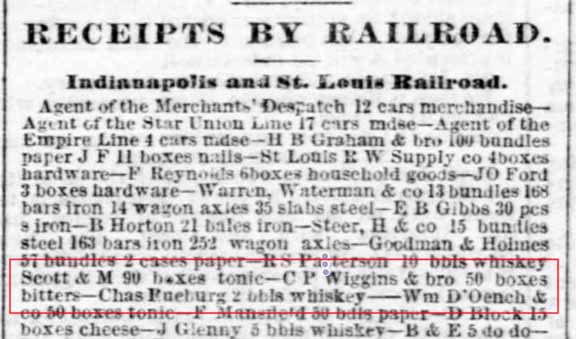 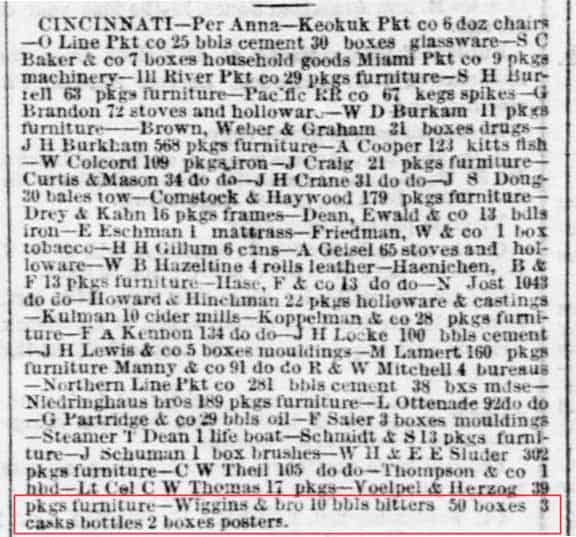 Ferdinand Meyer V is a native of Baltimore, Maryland and has a BFA in Fine Art and Graphic Design from the Kansas City Art Institute and School of Design. Ferdinand is the founding Principal of FMG Design, a nationally recognized design consultation firm. Ferdinand is a passionate collector of American historical glass specializing in bitters bottles, color runs and related classic figural bottles. He is married to Elizabeth Jane Meyer and lives in Houston, Texas with their daughter and three wonderful grandchildren. The Meyers are also very involved in Quarter Horses, antiques and early United States postage stamps. Ferdinand is the past 6-year President of the Federation of Historical Bottle Collectors and is one of the founding members of the FOHBC Virtual Museum.
View all posts by Ferdinand Meyer V →
This entry was posted in Advertising, Bitters, History, Liquor Merchant, Medicines & Cures, Trade Cards and tagged agent, bitters, Brady's, Cincinatti, distributor, family, Gourd, Houston, Kemler, Kentucky, Louisville, ohio, Sangston, St. Louis, texas, Wiggins. Bookmark the permalink.