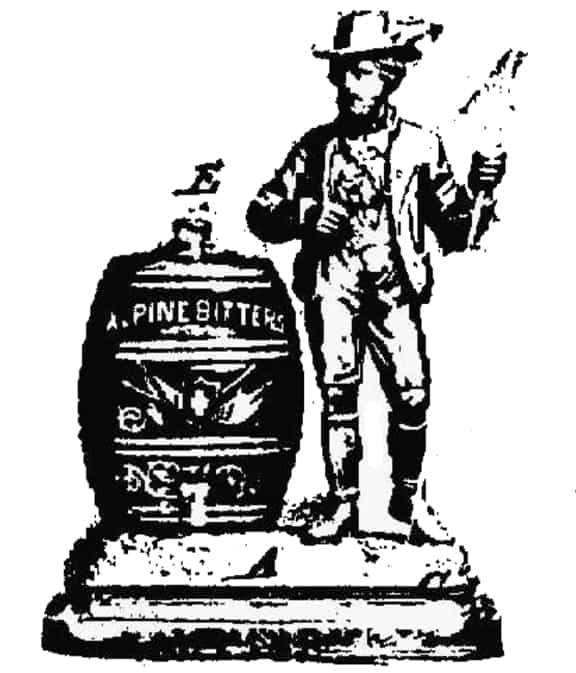 First of all, we are not talking about the western, Alpine Herb Bitters put out by Thomas Taylor Company in San Francisco. We are however, speaking of the Alpine Bitters manufactured and marketed by Otto Kornemann & Julius Jungbluth in New York City. These two actually had a design patent for a statuette or “ornamental device, intended more especially for bars of drinking-houses, hotels, and saloons where Alpine Bitters is offered for sale.” They also had a “new and original design for a trade-mark for distinguishing and identifying the true Alpine Bitters as manufactured and sold by”…

What prompted this post today was finding this Alpine Bitters advertisement below in the Galveston Bulletin dated Wednesday, March 8, 1871. Why so far away? Why no bottles? Again, every bottle or brand has a story.

These bitters are the pure extracts of herbs and roots, which grew only on the mountains of Switzerland and the Alpine regions.. 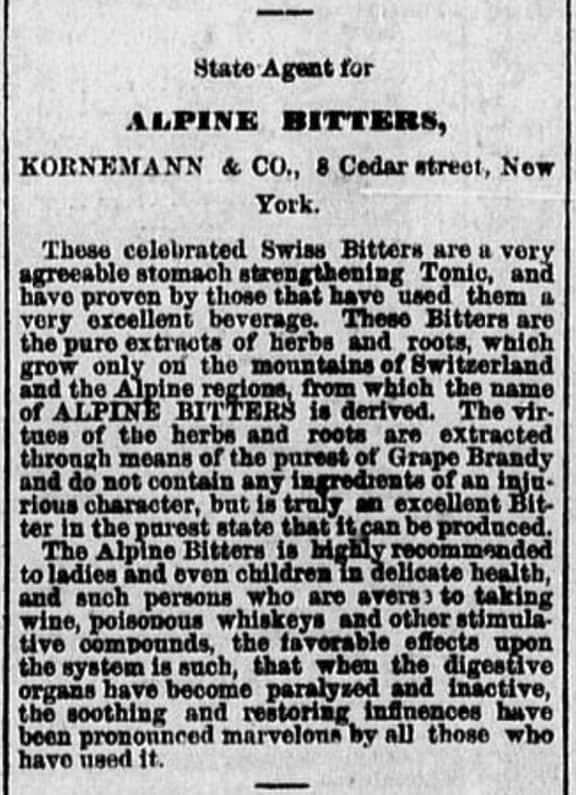 No known embossed Alpine Bitters bottles exist to my knowledge though there is a notation in the Bitters Bottles book by Carlyn Ring and W.C. Ham for an Alpine Bitters by Kornemann & Co. which is:

A 35 ALPINE BITTERS
For Sale Only By Korenmann & Co., (sp: Kornemann) importers and sole agents. 8 Cedar Street, New York. The popular European tonic and anti-dyspeptic elixir. Made entirely of roots and herbs.

“ornamental device, intended more especially for bars of drinking-houses, hotels, and saloons where Alpine Bitters is offered for sale.” 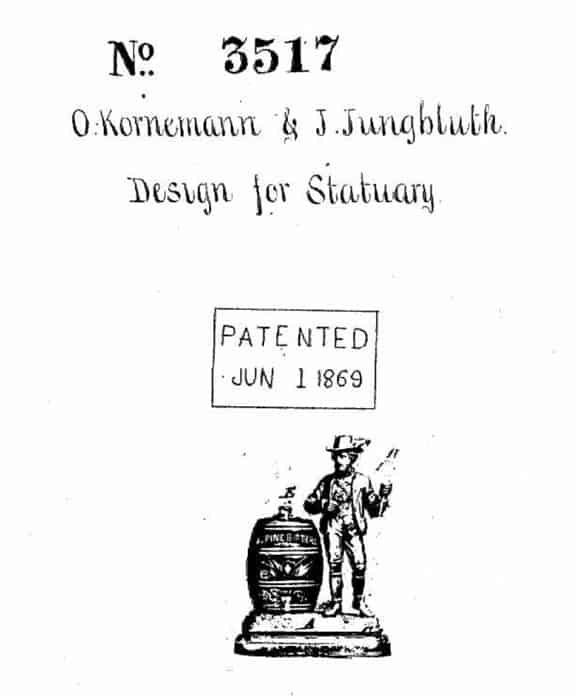 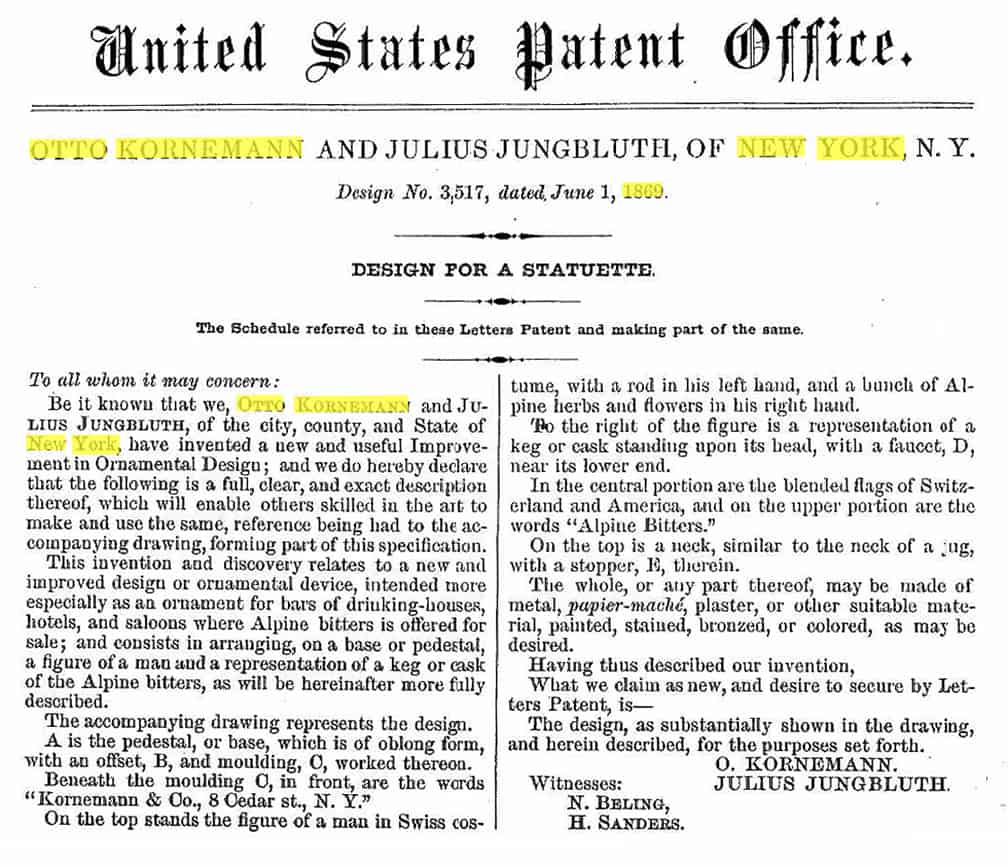 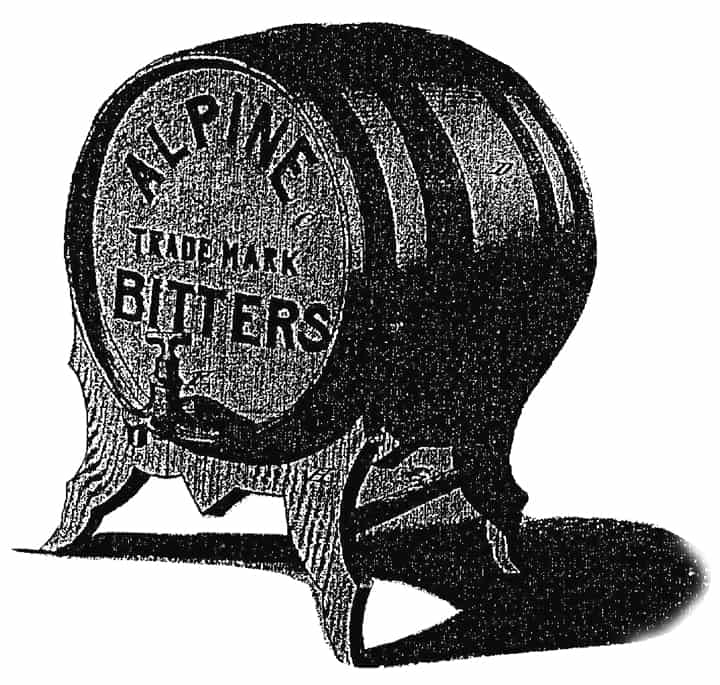 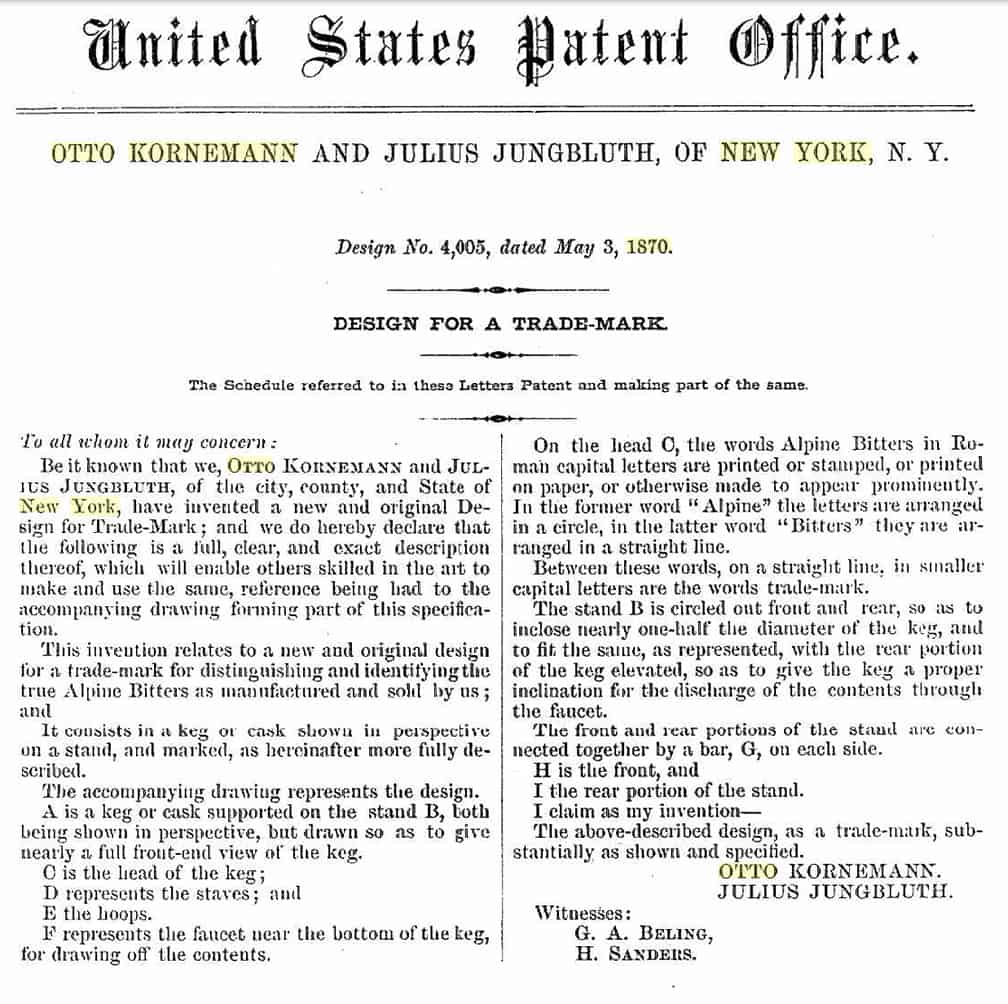 The only Kornemann bottle picture (horizontal below) I could find was over at Antique-bottles.net. I believe this might be the bottle with an applied label reading Alpine Bitters. According to jkeeney (bottle lister), the bottle is embossed with “KORNEMANN & CO”. The seam stops at the beginning of the neck. It is 10 1/2″ high  by 2 3/4″ diameter. The bottle is 12 sided that stops at the shoulder.

“Very interesting! Two examples of an amber bottle embossed simply ‘Julius Jungbluth’, same shape as the Kornemann bottle, were found years ago in Alta, Utah. Always wondered where they were from and what they contained.” – Roger Terry

Above horizontal picture embossed only “KORNEMANN & CO.“. Also depicted above is a “JULIUS JUNGBLUTH” embossed bottle noted by Roger Terry.

PRG Note: I have a feeling that this is the same Otto Kornemann but have not made a definitive link.

OTTO KORNEMANN, Importer of Peat Moss for Stable Bedding No. 14 Piatt Street. Among the most active and enterprising general importers from Europe is Mr. Otto Komemann of No. 14 Piatt Street. There are few, if any, in the metropolis possessed of his wide range of practical experience, and his sound judgment in introducing goods specially demanded by the American public. A native of Germany, Mr. Kornemann has now been a resident of the United States, for upward of thirty-two years, and since 1877 has been actively engaged in business at his present stand as the leading importer of chemically -pure glycerine and glycerine for high explosives, the excellent standard of which is universally acknowledged. He has developed business of great magnitude with influential connections, both at home and abroad. He is the importer of the famous O. K. brand peat moss stable bedding, as yet a novelty in our country, though it has been in use for years past on the continent. A description of this article and its many virtues will prove highly interesting to all owners of horses, and those who keep themselves well informed upon the improvements of the age. Peat moss bedding is the only perfect article for bedding in the world; the manure is deodorized by it, thereby producing pure air, while horses’ feet undergo a radical change, inasmuch as they become soft, and the universal verdict is that horses’ feet rendered tender and inflamed by the stone pavements of cities are soothed and cooled in the most remarkable maner; horses also require less grooming, owing to the cleansing properties of the moss. From the economical point of view it has no equal, from one to two bales sufficing for one horse per year. Were these alone the only recommendations it would be by far the best bedding in existence, but to them is to be added the important fact that the bedding when removed is the richest manure known, charged full of ammonia, worth from $7.50 to $25 per ton* for the fertilizing material absorbed, while it keeps the soil moist for a longer period, after rain, than any other substance. Peat moss manure is one of the richest fertilizers known, and the demand far exceeds the supply. We recommend all horse owners, as well as managers of large stables, to send to Mr. Kornemann for his circular and testimonials, and test a sample bale of this truly wonderful bedding, now so rapidly replacing straw and all other substances there for. Mr. Kornemann’is a merchant of sterling integrity, and exercises a liberal policy, being worthy of the marked success achieved.

A STEAM-SHIP SUNK AT SEA.; THE POMMERANIA RUN DOWN BY AN IRON BARK. FIFTY-EIGHT LIVES REPORTED LOST. A MIDNIGHT COLLISION OFF FOLKESTONE THE GREAT STEAM-SHIP STRUCK AMIDSHIPS BY A BARK UNDER FULL HEADWAY STRUGGLES OF THE PASSENGERS AND CREW FOR LIFE HEROIC CONDUCT OF CAPT. SCHWENSEN LISTS OF THE SAVED AND LOST THE CARGO AND ITS VALUE.

I am not certain but by looking at the many articles that are available online, it looks like Otto Kornemann survived this historic steamship disaster. This is a possibility that this is the same Otto Kornemann. I am working on the connection.

Otto Kornemann listed as one of the survivors– Terrible Collision in the Channel, Serious Loss of Life, The Daily Telegraph, November 27th, 1878

Read: The Story of the Disaster 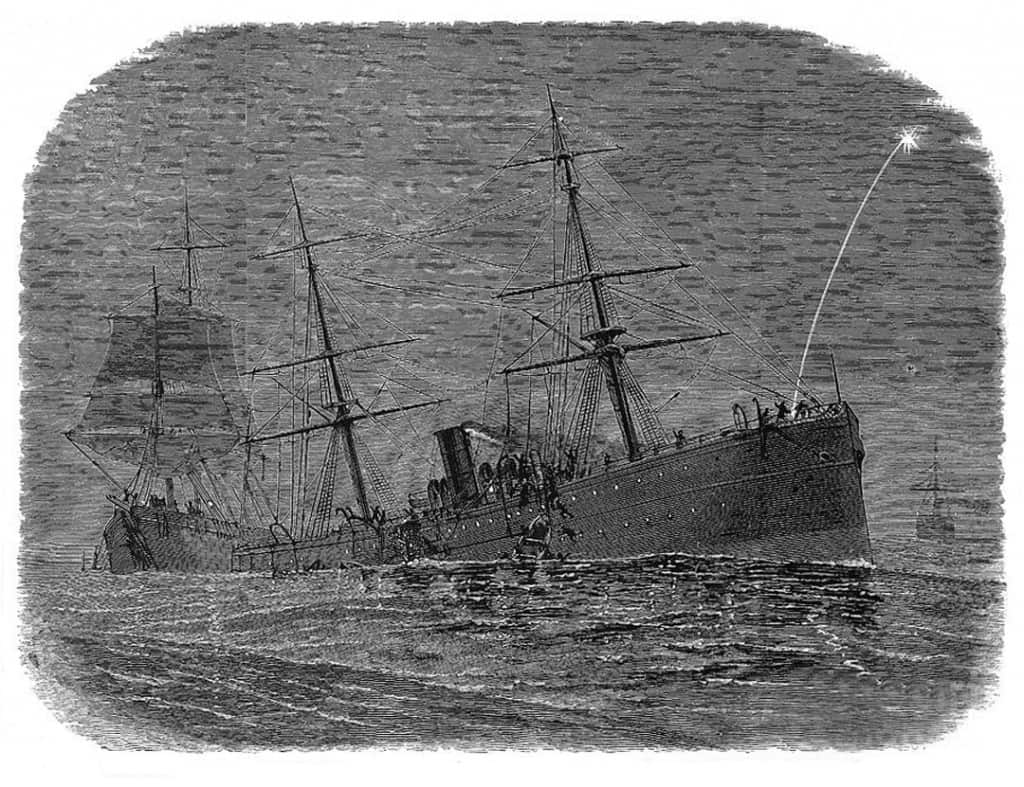 Ferdinand Meyer V is a native of Baltimore, Maryland and has a BFA in Fine Art and Graphic Design from the Kansas City Art Institute and School of Design. Ferdinand is the founding Principal of FMG Design, a nationally recognized design consultation firm. Ferdinand is a passionate collector of American historical glass specializing in bitters bottles, color runs and related classic figural bottles. He is married to Elizabeth Jane Meyer and lives in Houston, Texas with their daughter and three wonderful grandchildren. The Meyers are also very involved in Quarter Horses, antiques and early United States postage stamps. Ferdinand is the past 6-year President of the Federation of Historical Bottle Collectors and is one of the founding members of the FOHBC Virtual Museum.
View all posts by Ferdinand Meyer V →
This entry was posted in Bitters, History, Liquor Merchant, Mailbox Letters, Medicines & Cures, Questions, Tonics and tagged Alpine, bitters, Julius Jungbluth, Kornemann, Kornemann & Co., Moel Eilian, Otto Kornemann, Peat Moss, Pommerania, statuette. Bookmark the permalink.