Here are my findings on the Southern Alterative 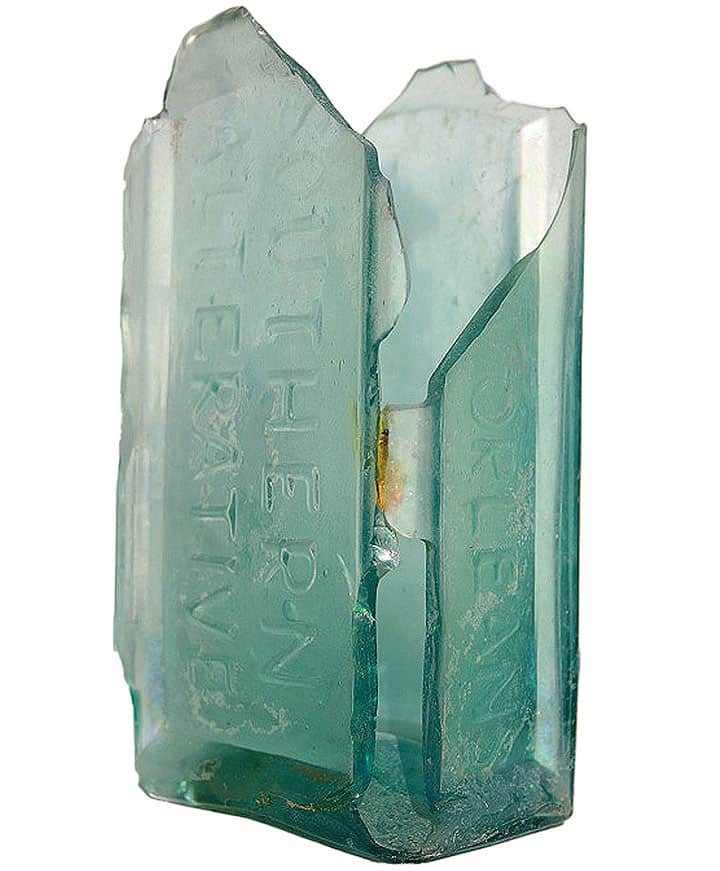 Here are my findings on the Southern Alterative

Here are my findings on the Southern Alterative (pictured above) embossed New Orleans. I am attaching a number of advertisements. The most important one is from The Star State Patriot which is pictured below: 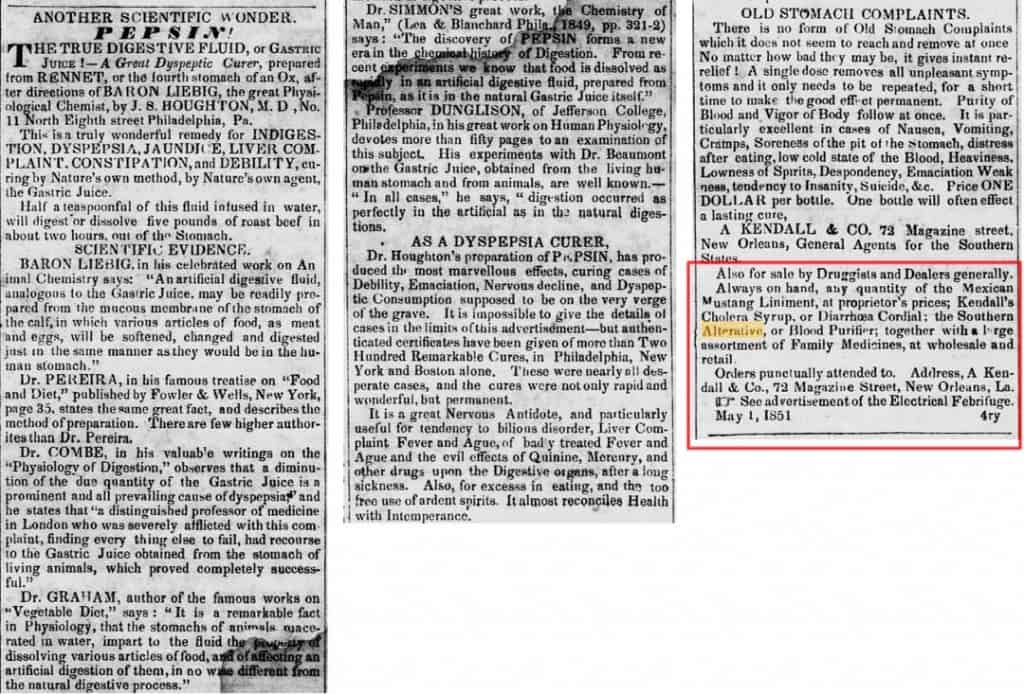 Advertisements for the Febrifuge were found in papers from Texas to New York.

This is the only advertisement I have found showing someone making a “Southern Alterative” reference. Dr. A. Kendall was also know for his Electrical Febrifuge. Advertisements for the Febrifuge were found in papers from Texas to New York.

A check of the New Orleans City directory in 1851 found the following people at 72 Magazine Street:

Here are some depictions of New Orleans from that time period: 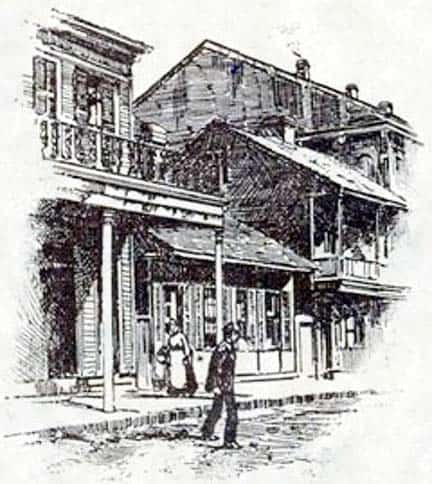 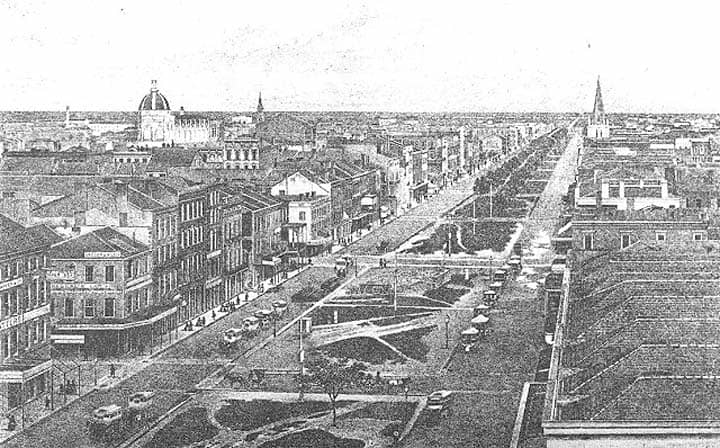 1850s view Canal Street which 72 Magazine Street (A. Kendall & Co.) was at the intersection

It is interesting that both Kendall and Seat had “electric” products.

Based on the city directory, I would say the “& Co” was N. W. Seat. I found that an N. W. Seat put out a Negative Electric Fluid in New York in 1853. Kendall & Co. had a depot in New York in 1851 run by an S. E. Kendall. It is interesting that both Kendall and Seat had “electric” products. The web page antiquemedicines.com has pictures of both bottles (pictured below). 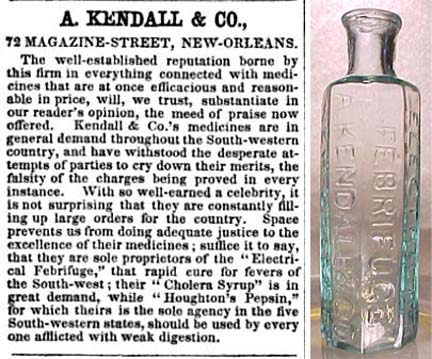 1852 advertisement (see below) and a A. KENDALL’S ELECTRICAL FEBRIFUGE NEW ORLEANS – antiquemedicines.com

I also checked to see if Dr. Burney James Kendall, of Kendall’s Spavin Cure fame, was related. I could not find any connection there.

A. Kendall & Co., 72 Magazine-Street, New Orleans – New York past present and future – comprising a history of the city of New York – 1851 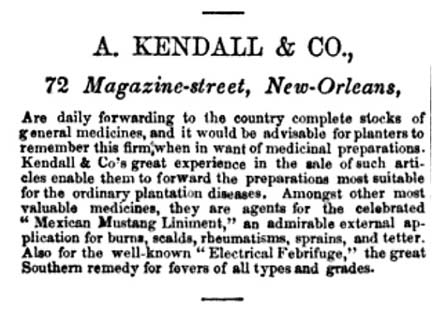 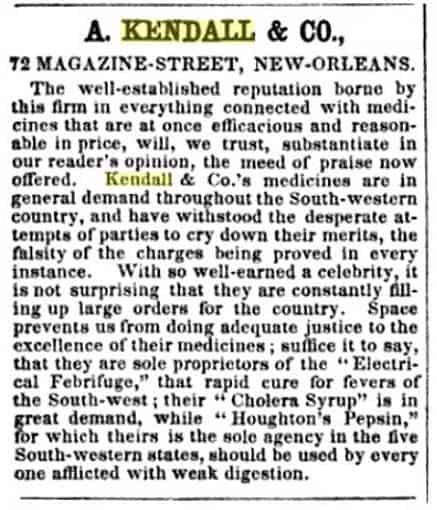 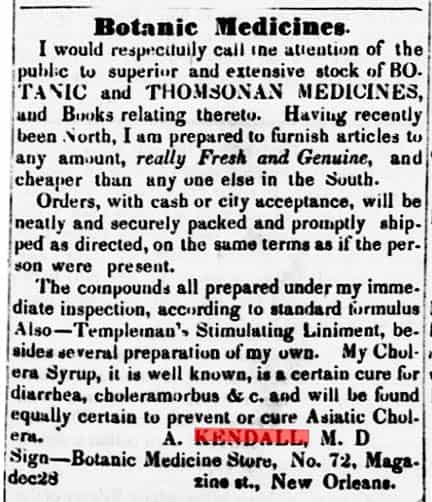 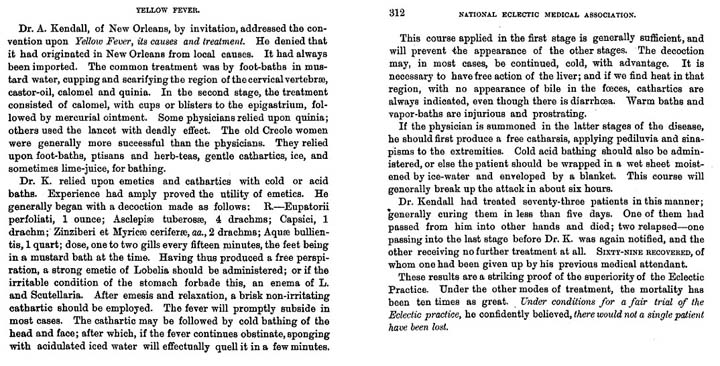 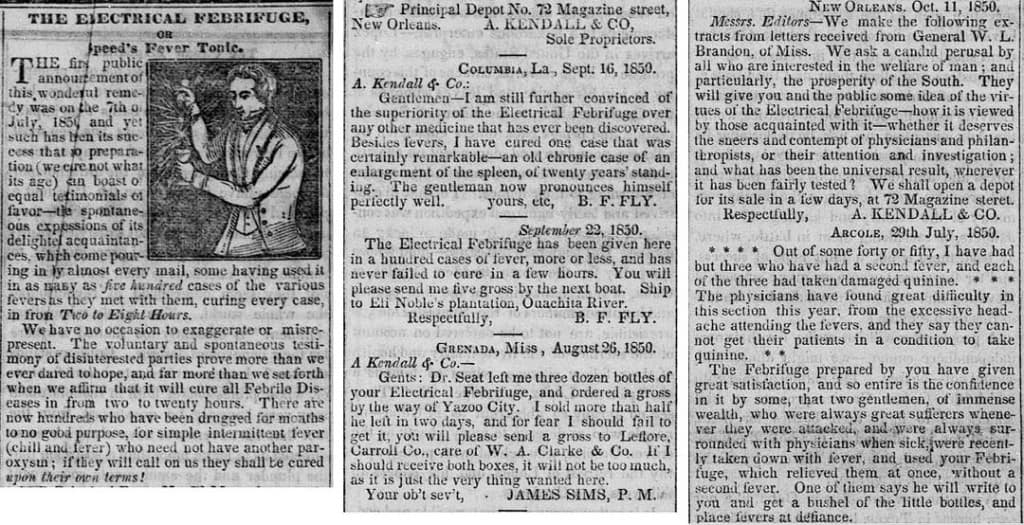 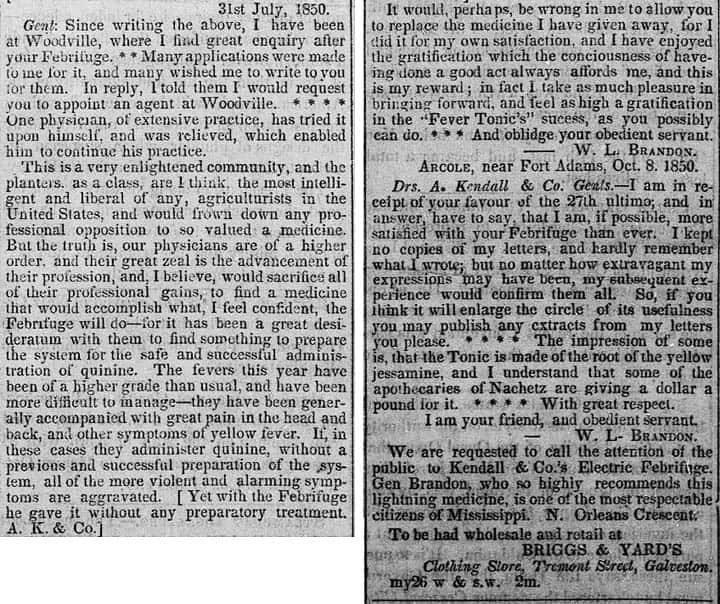 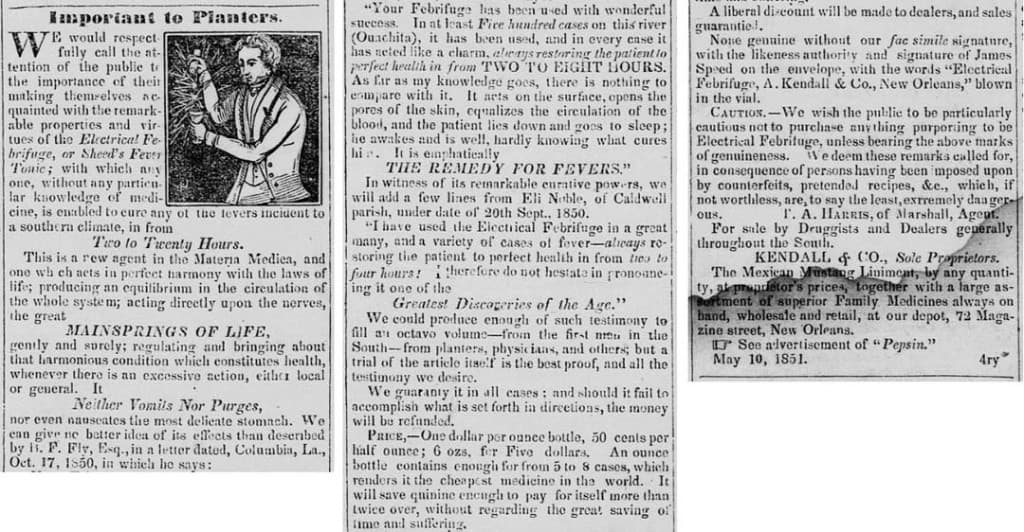 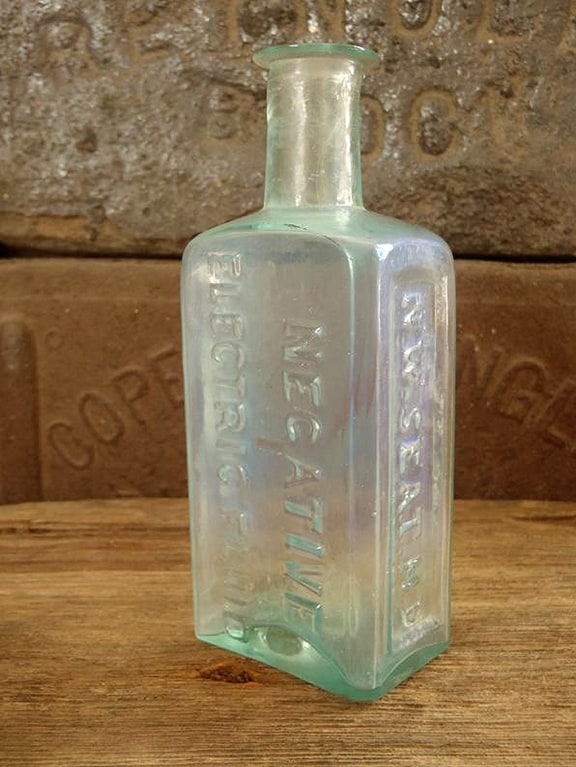 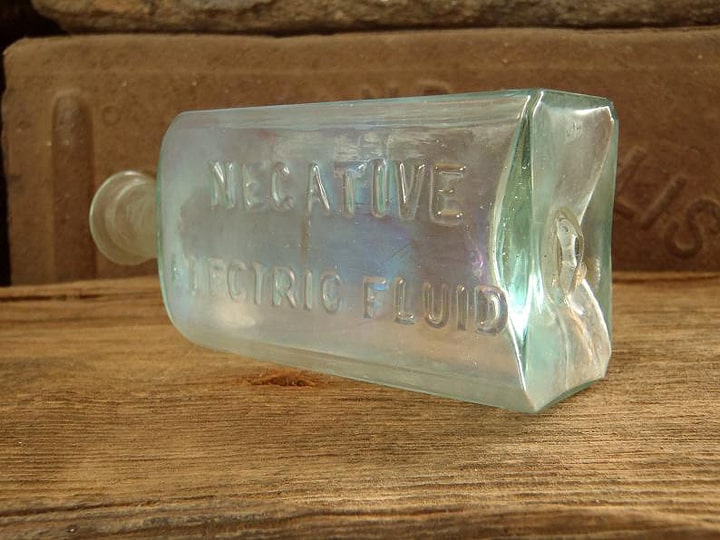 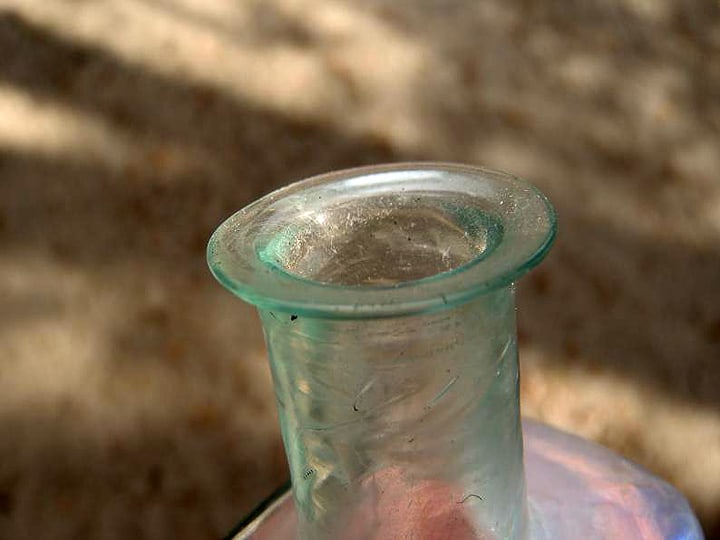 Ferdinand Meyer V is a native of Baltimore, Maryland and has a BFA in Fine Art and Graphic Design from the Kansas City Art Institute and School of Design. Ferdinand is the founding Principal of FMG Design, a nationally recognized design consultation firm. Ferdinand is a passionate collector of American historical glass specializing in bitters bottles, color runs and related classic figural bottles. He is married to Elizabeth Jane Meyer and lives in Houston, Texas with their daughter and three wonderful grandchildren. The Meyers are also very involved in Quarter Horses, antiques and early United States postage stamps. Ferdinand is the past 6-year President of the Federation of Historical Bottle Collectors and is one of the founding members of the FOHBC Virtual Museum.
View all posts by Ferdinand Meyer V →
This entry was posted in Advertising, History, Medicines & Cures, Questions, Tonics and tagged A. Kendall & Co., Canal, Dr. A. Kendall, electrical, Febrifuge, James Viguerie, Jimmy Bray, Magazine, N. W. Seat, New Orleans, New York, S. E. Kendall, Southern Alterative, texas. Bookmark the permalink.