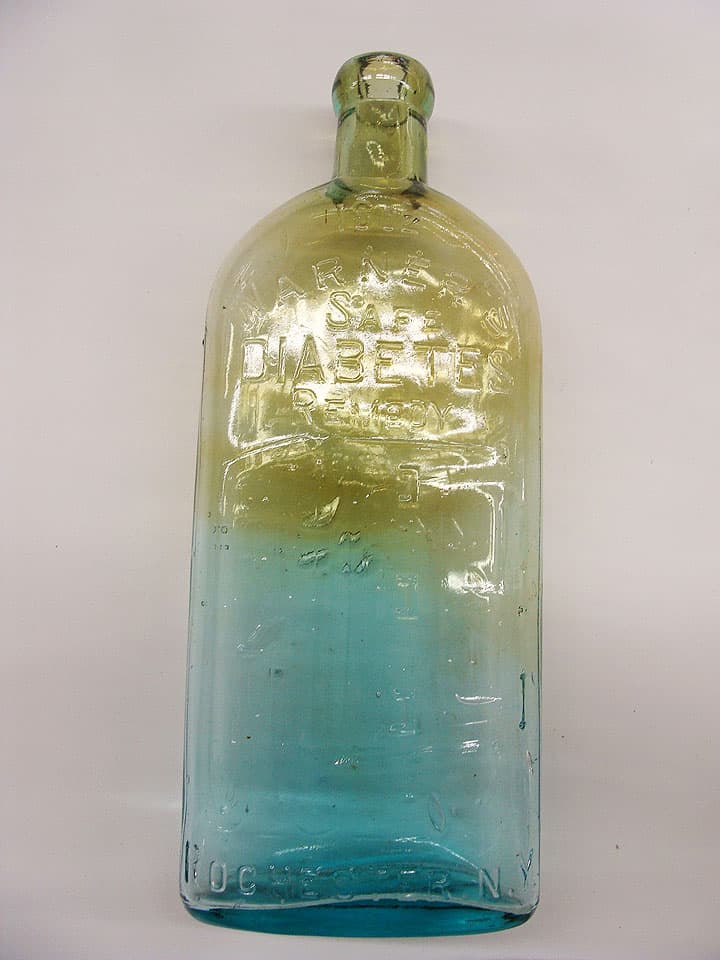 In 2012, at either the FOHBC Reno Expo or the 49er Antique Bottle Show in Auburn, I had the pleasure of meeting Jack, Kathy and Michael Craig through an introduction by Michael and Alice Seeliger. The Craig’s are royalty as far as Warner bottles are concerned. I saw some amazing photographs of their collection that still give me chills on this hot summer day. 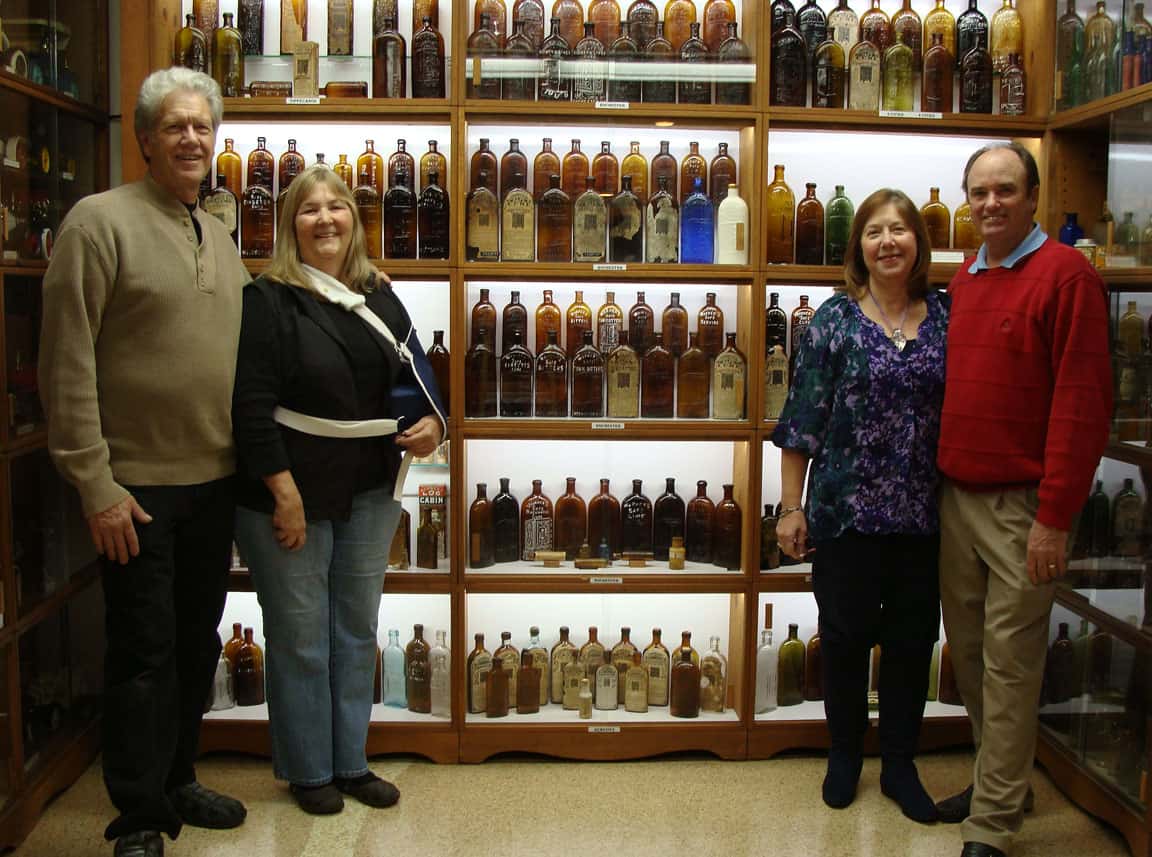 Mike was down at Peach Ridge this past weekend for the Houston Antique Bottle Show and to take color spectrometer readings of some of my bottles. Our discussion eventually circled back to the Warner Safe bottles, the Craigs and a specific two-tone Warner’s Safe Diabetes Remedy. I asked Mike to send me a picture of the bottle:

Here is the two-tone bottle the Craig’s purchased. They already have the green version and clear, they now want the aqua one. They also have a dark olive green Diabetes Remedy. All the unusual colors that Warner did after he got out of the business and the later owners didn’t seem to care much about bottle color variations.

I also attached the start of my redo on my book. It gives a quick history of Warner and his affiliation with Craig. 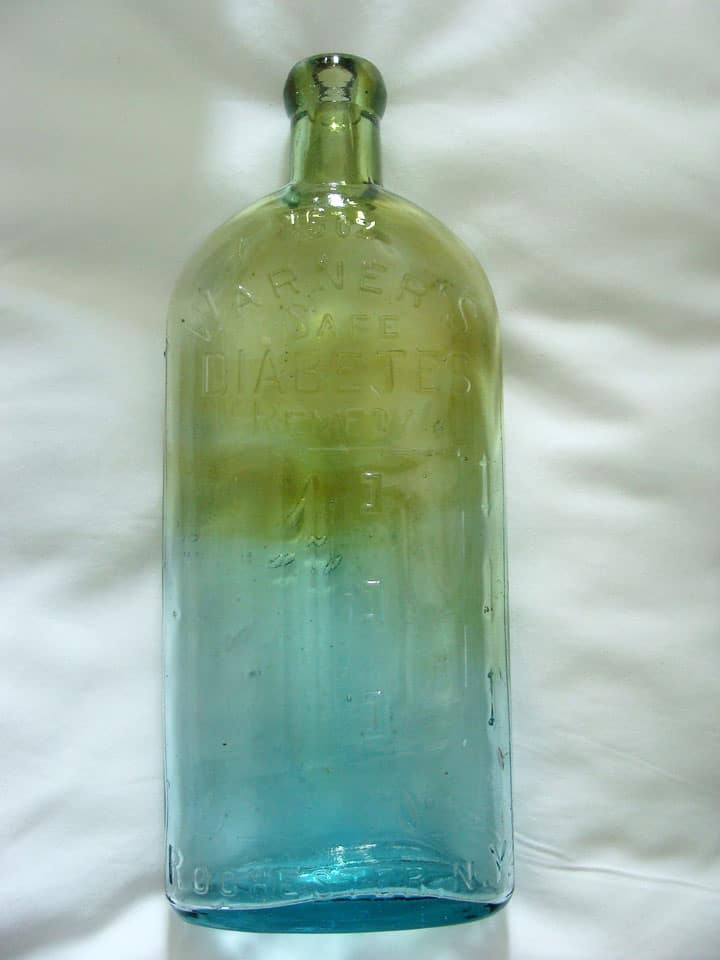 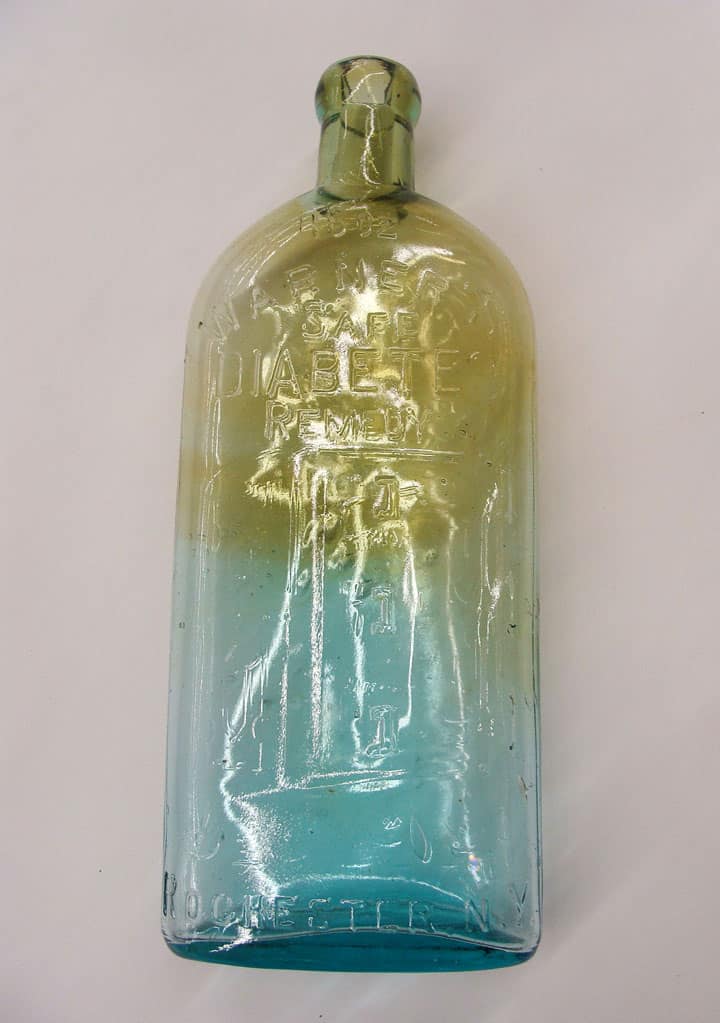 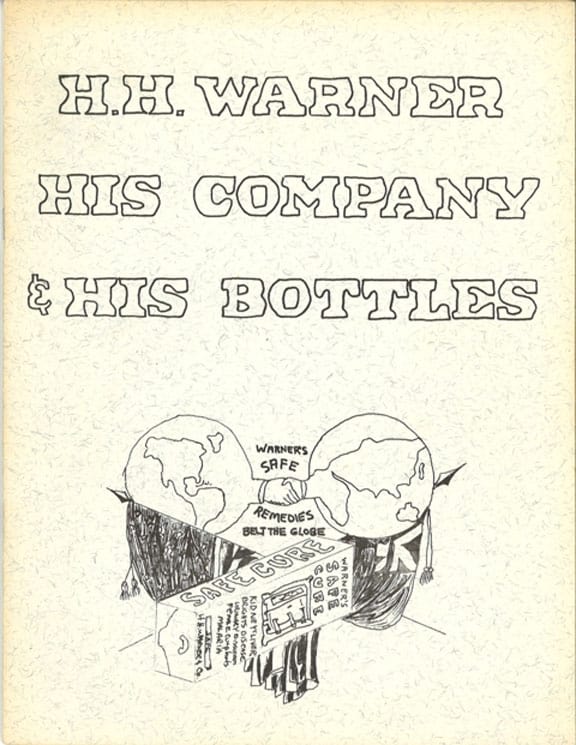 To: Alice, my wife, who still continues with her gentle understanding of my need to collect and my enthusiasm toward bottles over the last 45 years and helped all of this become possible. 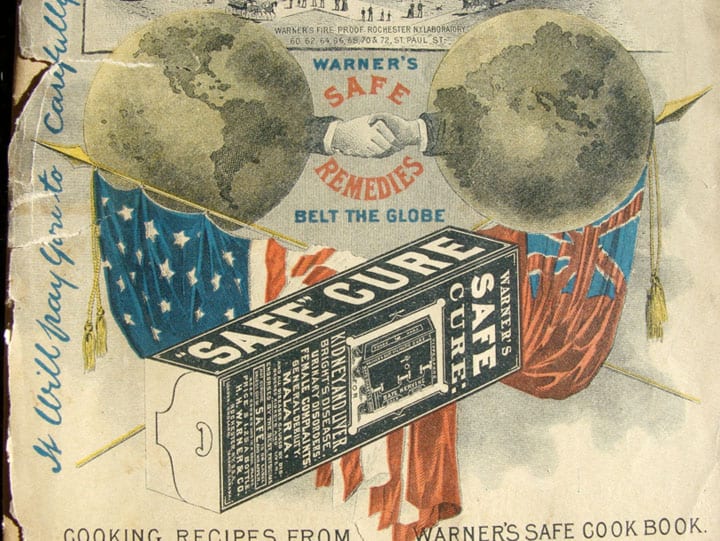 The original book H. H. Warner His Company & His Bottles was written out of an expanding interest in Warner and his bottles. Foreign branch bottles were just becoming popular and there was a great need for some classification of the vast difference in his bottles. Someone needed to set the standard for describing the unbelievable number of Warner bottles that H. H. Warner used throughout his company’s lifetime. I attempted to do that with the original book written in 1974.

Since that time more and more information on Warner has surfaced. Some excellent books have been written to classify all the currently known bottles and variants. The Warner Story continues to astound me. The complexity, the vastness of the Warner Empire, the sheer number of different bottles used by Warner, his triumphs and his pitfalls prove that Warner was truly the “King of the Patent Medicines.”

Alice and I sat in our backyard in Madison typing out the original manuscript on a manual typewriter. Our first son Matthew was born a month later. I drew the bottles by tracing templates and copied some of the pictures from Almanacs and Booklets freehand. It was truly a labor of love. It provided my life my 15 minutes of fame when it came out. 250 copies were printed at a total cost of $250.

Fast forward to today. We have two wonderful sons Matt and Jon. They have given us 5 grandkids that we truly admire and enjoy. Our lives revolve around family and our pursuit of bottles. We continue to go to bottle shows trying to attend as many as we can. I still collect Warner bottles but have branched out into all kinds of bottles. I really appreciate old American glass and try to acquire examples that I feel show American glass as the art form it truly is. As with all bottle collectors, today we enjoy the camaraderie of our life-long friendships we have made in the field.

Why write a new book? So much more information on Warner exists today. The technology to put all this information in one place is available. I decided to contact as many of the Warner collectors I know and have them assist me in compiling this information in one place. I also wanted to acknowledge the contributions made by all of them towards the complete understanding of Warner’s vast empire and his eventual fall. The story is truly fascinating and we hope you enjoy it as much as we did putting it together.

At his pinnacle in 1884, he was described as being six feet one inch tall of large frame, weighing 250 pounds, of light complexion, blue eyes, iron gray hair and bids to live to a hale and hearty old age. 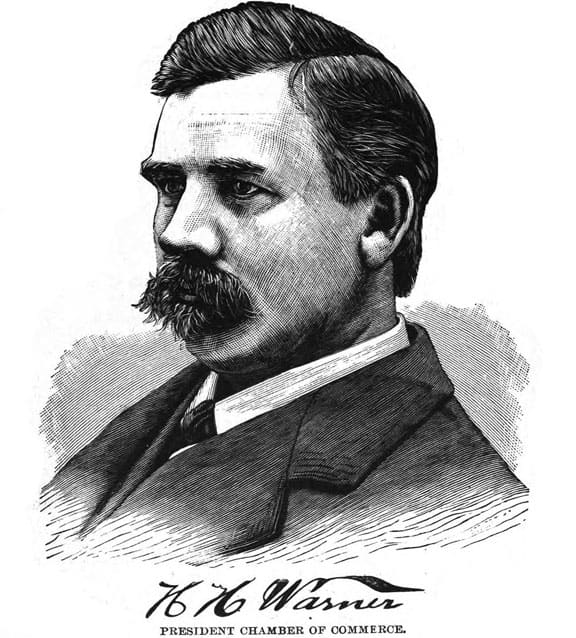 H. H. Warner was born near Syracuse NY in a small settlement still called “Warners,” named after his grandfather. The original house can yet be seen as one drives by the Warners ”rest stop” area along the main east-west roadway of New York State. His grandfather, Seth was one of the first settlers in the town, into which he moved in 1807, from Stockbridge, Mass. The Warners were true pioneers in central NY State and a family of early immigrants from England. Seth was the first of the family to move westward, coming in the late 1790’s. He took land and built a cabin on a hill just west of the present town. After traveling back to Stockbridge, he married Sarah Crittendon in 1798, to return that same day by wagon. He also brought his two brothers with him, who also built cabins. Very soon travelers began to call the area near the three brother’s cabins, Warners!

To be continued…..I will keep you abreast with the publication of Mike’s new book.

Ferdinand Meyer V is a native of Baltimore, Maryland and has a BFA in Fine Art and Graphic Design from the Kansas City Art Institute and School of Design. Ferdinand is the founding Principal of FMG Design, a nationally recognized design consultation firm. Ferdinand is a passionate collector of American historical glass specializing in bitters bottles, color runs and related classic figural bottles. He is married to Elizabeth Jane Meyer and lives in Houston, Texas with their daughter and three wonderful grandchildren. The Meyers are also very involved in Quarter Horses, antiques and early United States postage stamps. Ferdinand is the past 6-year President of the Federation of Historical Bottle Collectors and is one of the founding members of the FOHBC Virtual Museum.
View all posts by Ferdinand Meyer V →
This entry was posted in Collectors & Collections, Color Runs, Display, History, Medicines & Cures, Publications, Remedy and tagged Alice Seeliger, Diabetes, H. H. Warner, Jack Craig, Kathy Craig, Michael Craig, Michael Seeliger, Remedy, Steve Jackson, Warner's Safe Cure. Bookmark the permalink.