From an old Indian recipe in possession of the family of the proprietor for upwards of a century is now offered to the public as one of the most healthy and wholesale beverages extant and as a tonic is unsurpassed.

Old Sachems – No better time than now to review my favorite figural barrel. This brand has the great indian chief name, the New York locale, the balanced form, production history and comes in some great colors as you can see from my line-up above. It may also have been the first figural bitters right up there with the Constitution Bitters out of New York. Still working to determine this. 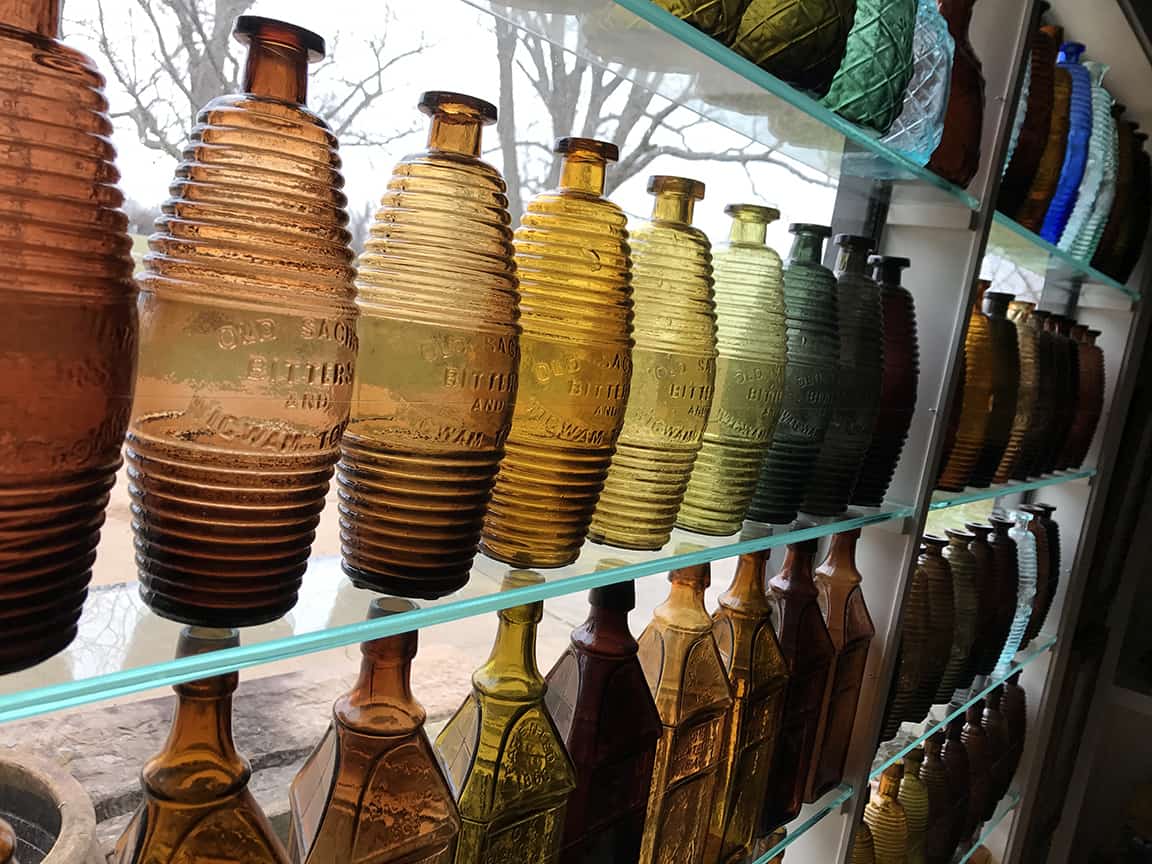 When I find a distinct color that I do not have, I get so excited that I can not even put it into words. I move the bottles around like chess pieces, trying to find the right partners. I also find myself constantly looking at the run for spiritual enlightment. I even nap in a room and fall asleep watching the colors change as the sun and clouds move throughout the day. Nirvana. Honestly, I also make many errors, like when I travel back from a show or receive a special delivery of a new Old Sachems, only to find out that the greatly anticipated color does not fit in with my run, usually because it is so similar to another. 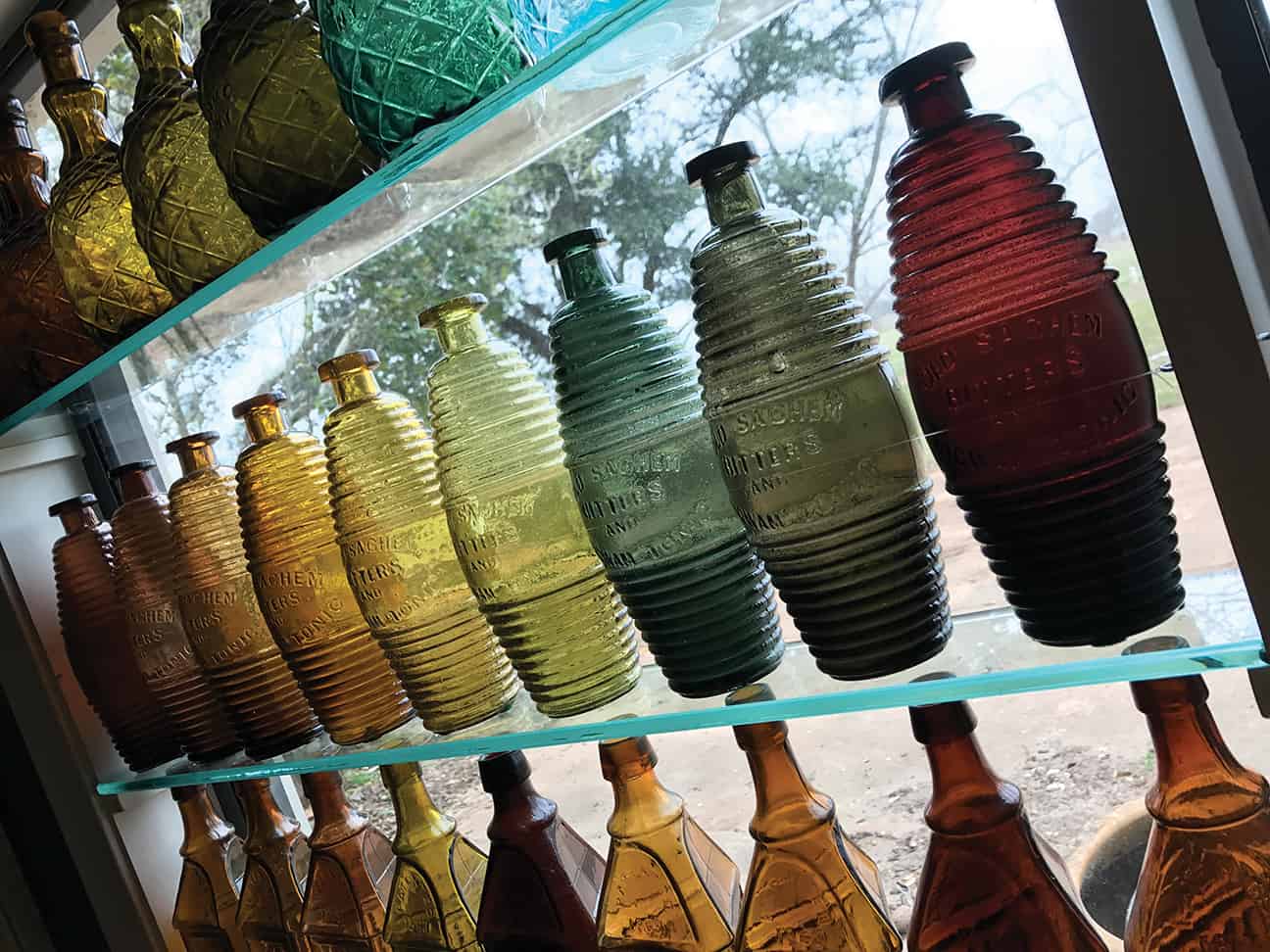 Now look at the olive color Old Sachems, 2nd from the right in the three pictures above. This is new. Unveiled here today. Ex: John Feldmann. This is the first bottle I am posting from the large Bitters bottle purchase in mid June from John.

From the best we can tell, this barrel first appeared around 1857 or so. 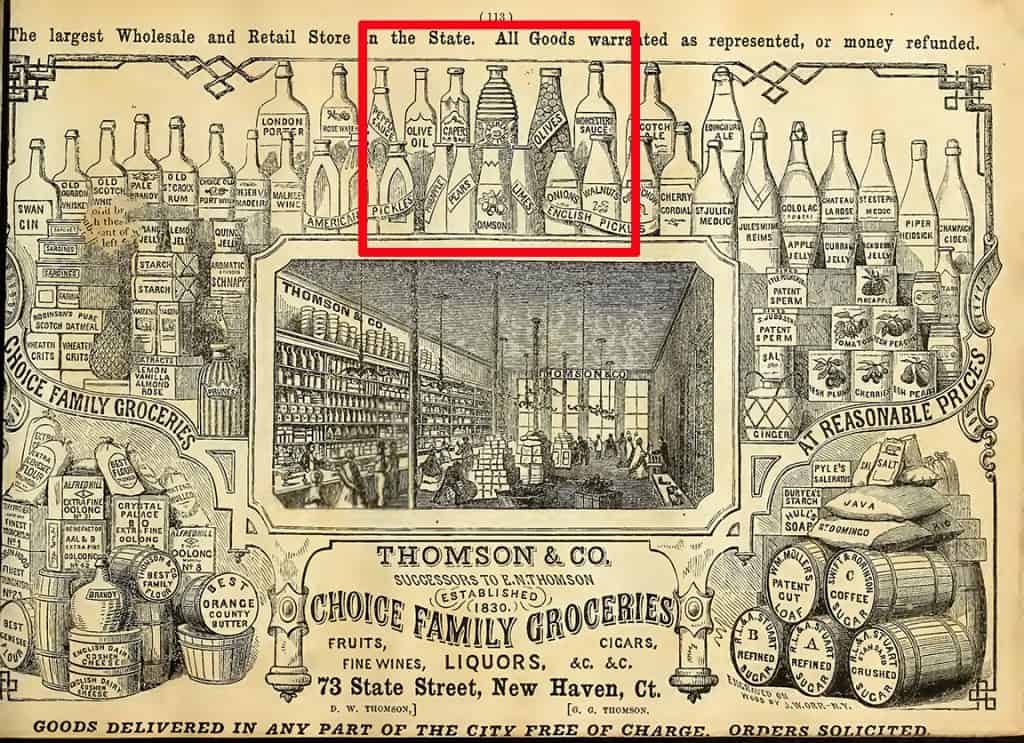 Here is a collection of images and favorites from my collection, my photo archives and some of my bottle collecting friends. 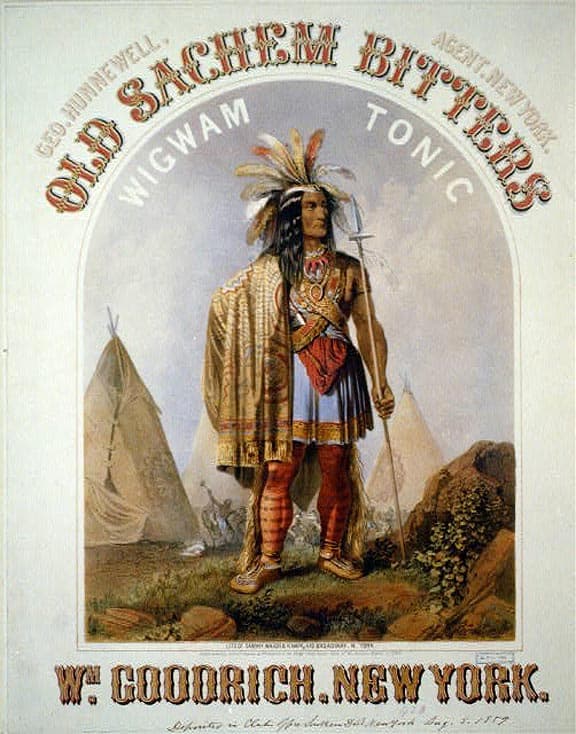 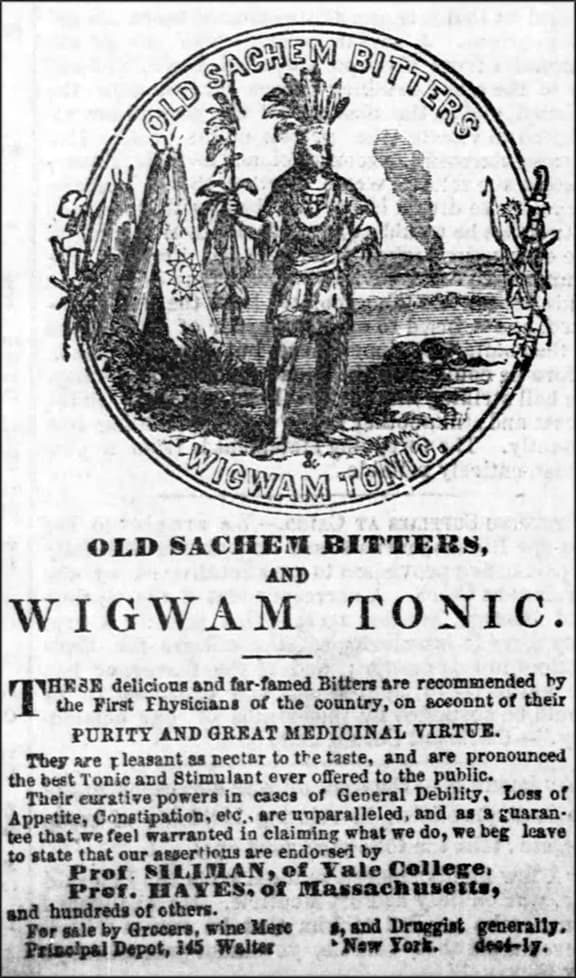 There are a number of variants of this bottle which have slightly differing embossing pattern, and slight differences in the diameter of the bottle.

Label: From an old Indian recipe in possession of the family of the proprietor for upwards of a century is now offered to the public as one of the most healthy and wholesale beverages extant and as a tonic is unsurpassed. Sold by principal grocers, druggists and hotels throughout the union. Endorsed by a professor at Yale College. Drug
Catalog: 1871, Schieffelin New Haven Daily News, April 7, 1859, Harpers Weekly, October 8, 1859. 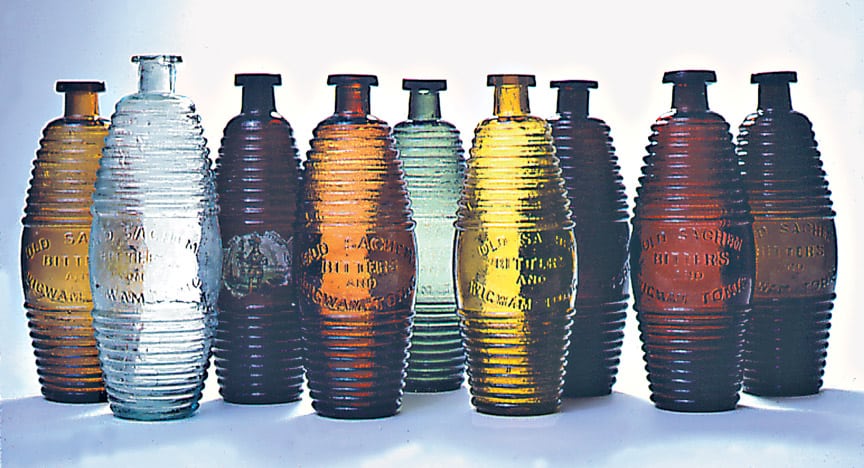 George Goodwin began manufacturing patent medicines in the 1840’s at 76 Union in Boston. Around 1850, he and Dr. John O. Langley of Langley’s Bitters became partners and in 1854, moved to 99 Union.

By 1857, the firm was named Geo. C. Goodwin & Co., and had taken in William B. Hibbard as a junior partner. Goodwin retired in 1859 and his son Charles C. Langley, and Hibbard ran the business. In 1863, they moved to 38 Hanover. Eventually the company became on of Boston’s largest wholesale drug firms. 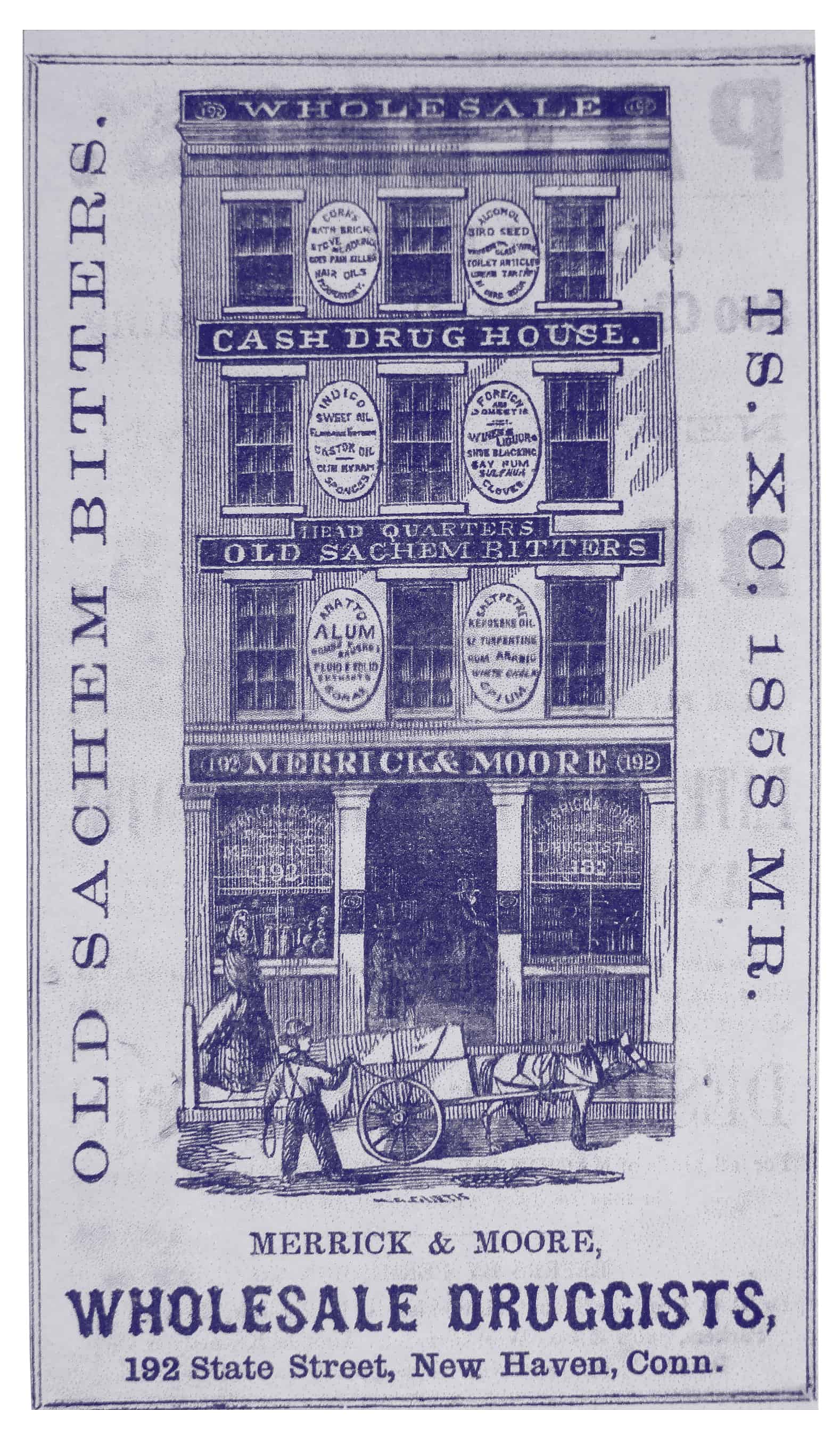 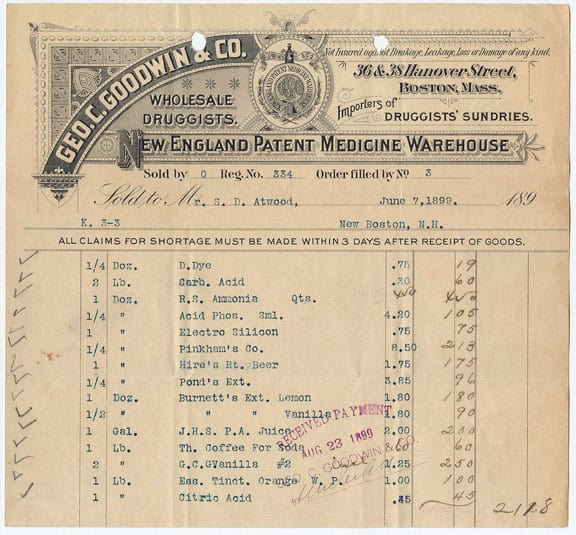 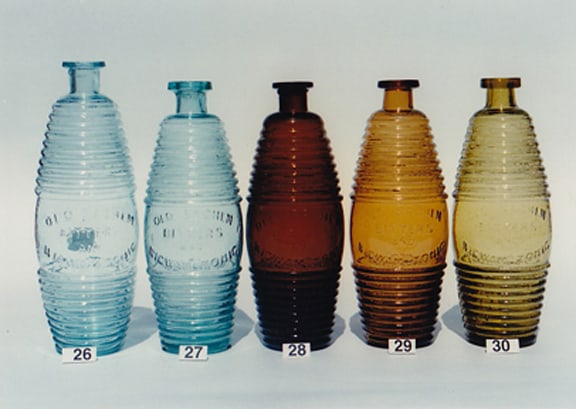 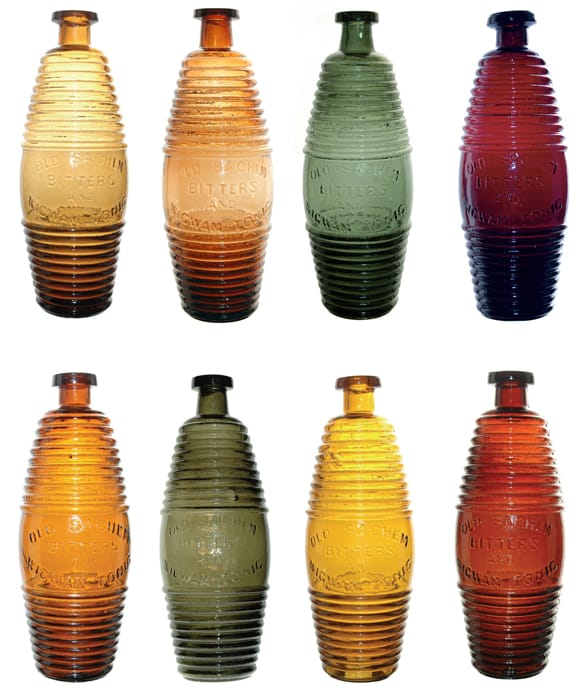 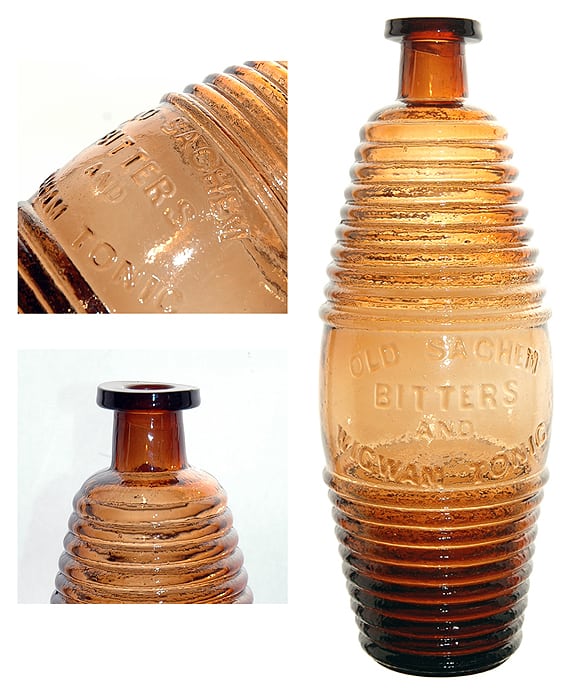 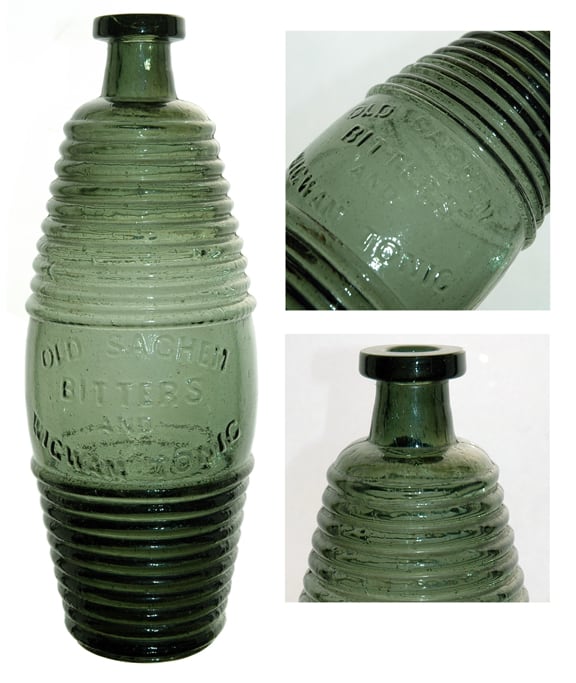 OLD SACHEM BITTERS AND WIGWAM TONIC, Killer bottle in sage green. Whittled. Literally attic mint having come out of an attic of a 1700’s house in South Glastonbury, Connecticut many years ago along with many other bottles. Pick of the litter. Picked up at Baltimore show from Noel Thomas – Meyer Collection 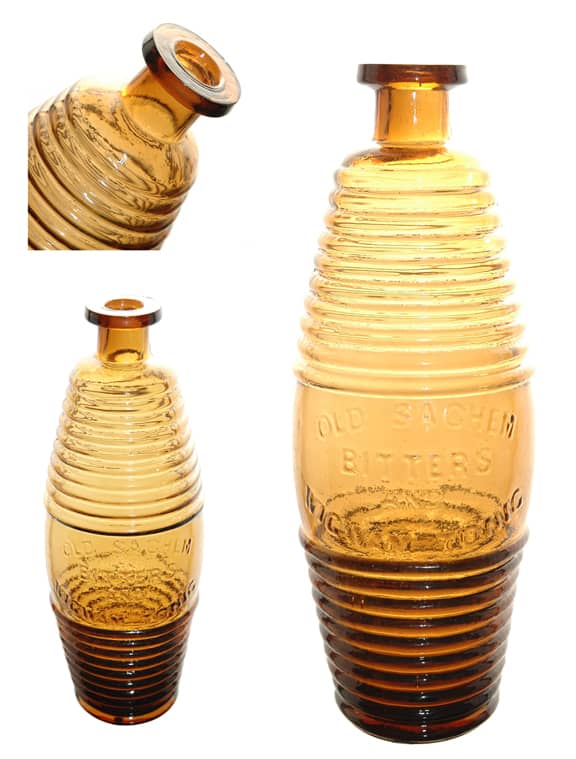 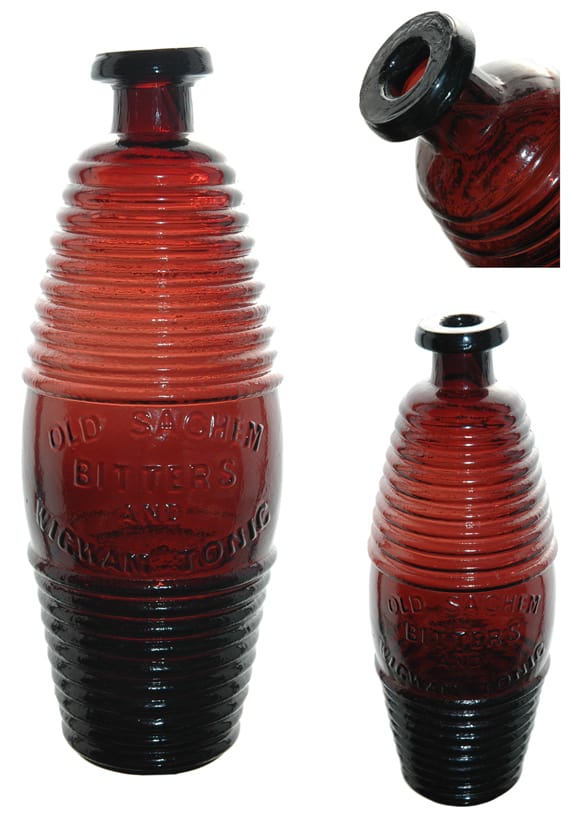 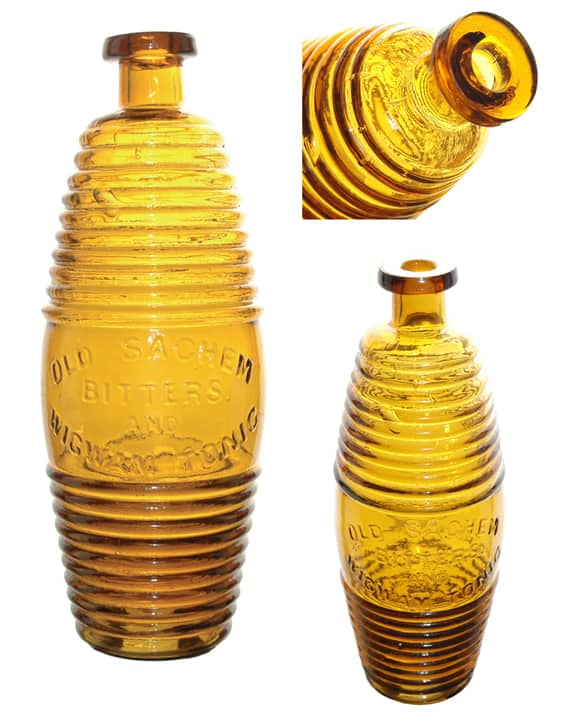 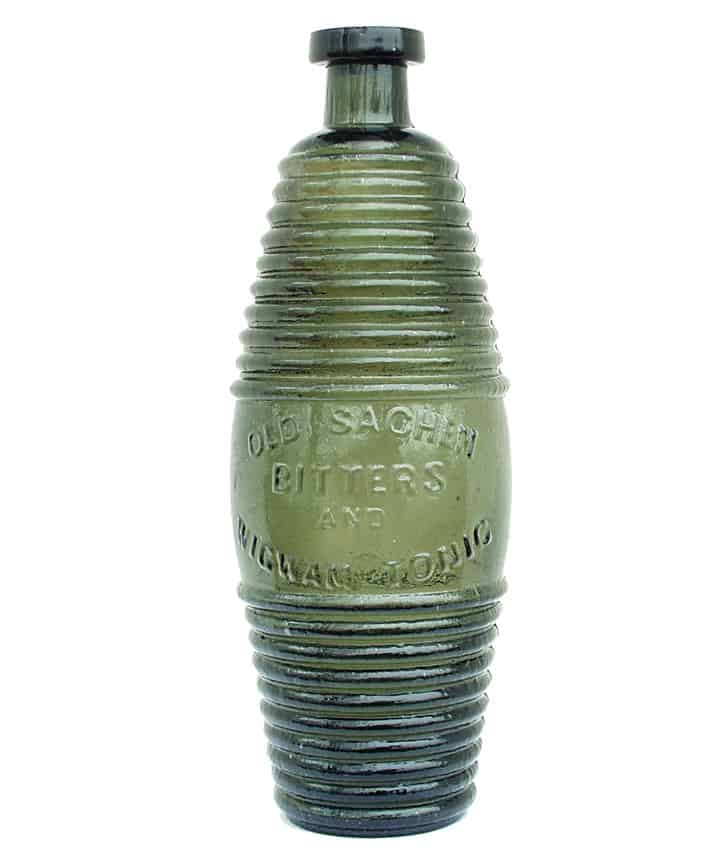 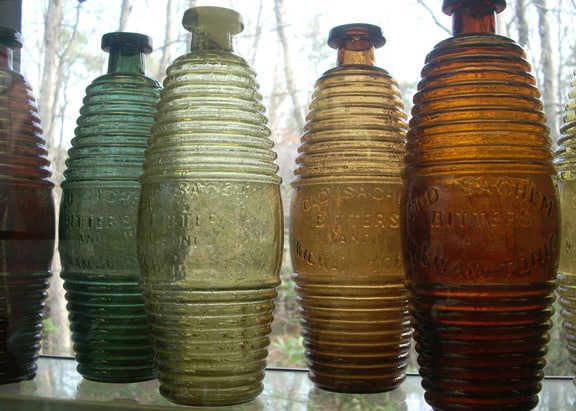 OLD SACHEM BITTERS AND WIGWAM TONIC barrels in an array of colors. – HistoricBottles.com 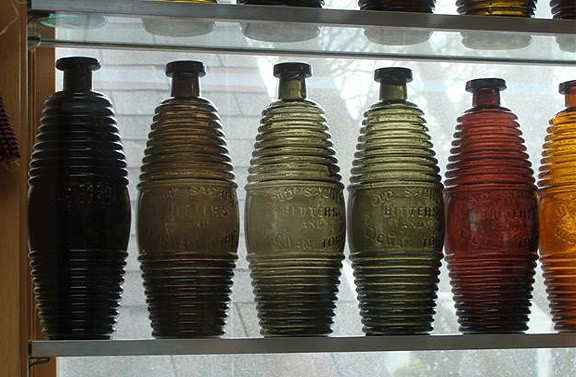 Legendary run of OLD SACHEM BITTERS AND WIGWAM TONIC figural barrels from the John Feldmann collection (These are John’s darker colors, the picture below shows the lighter barrels) 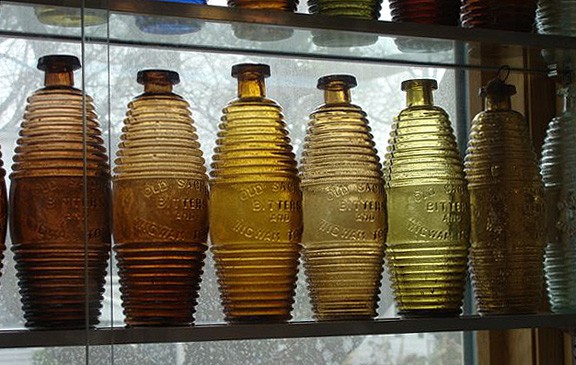 Legendary run of OLD SACHEM BITTERS AND WIGWAM TONIC figural barrels from the John Feldmann collection (These are John’s lighter colors, the picture above shows the darker barrels) 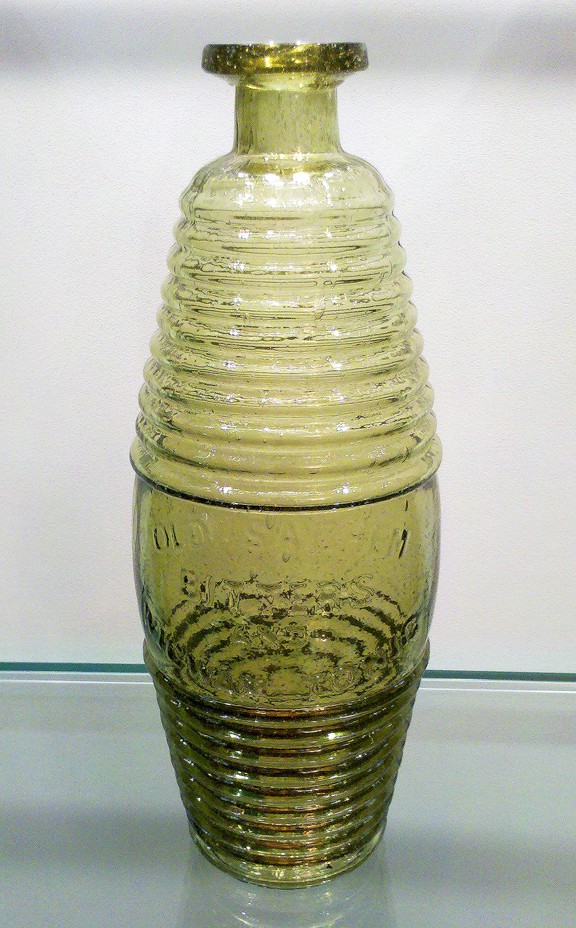 OLD SACHEM BITTERS AND WIGWAM TONIC figural barrel from the great Sandor Fuss collection. I have seen this bottle three times now in person and I have to admit, this is a killer. You have to see it in person. Tones of character and the citron – ginger ale color is incredible. This bottle was publicly announced in a sale from John Pastor to Sandor. Ex: Mike Henness. 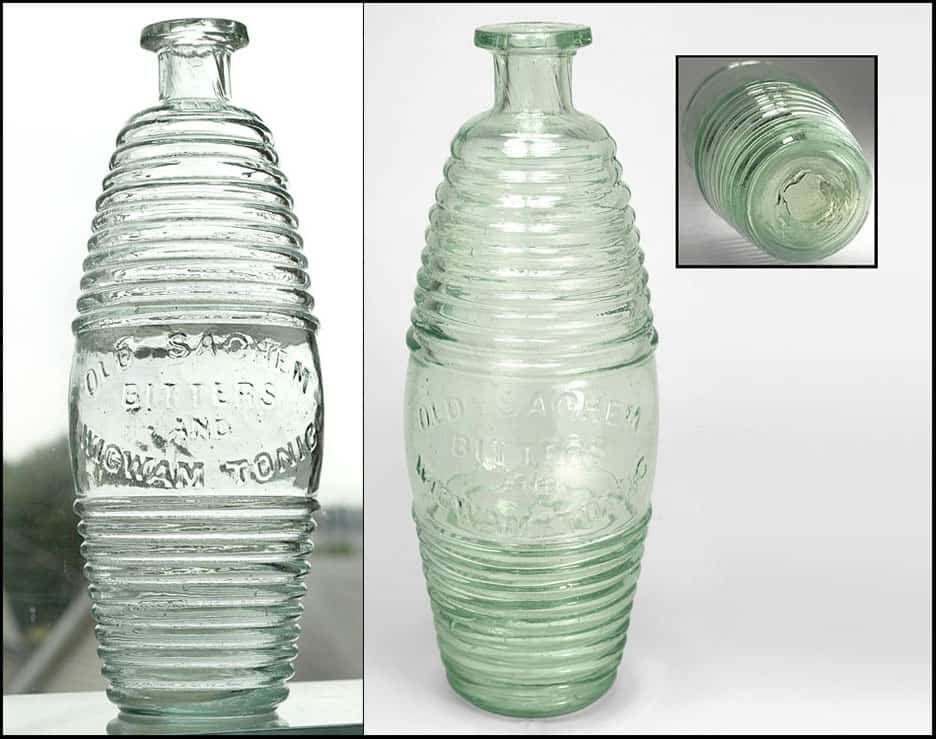