Today I will start a new series on Figural Barrels akin to the previous Fancy Squares, Figural Pig or Figural Cannon Series. With an email from Tim Henson that included his nice Hall’s Bitters pictures, this seems as good as any other place to start. 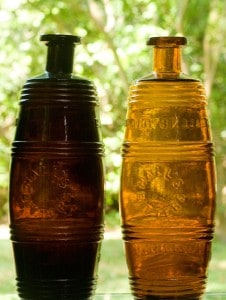 What is interesting about the Hall’s, is that there are two (2) mold variants. The older, and more sought after, ‘straight line’ Hall’s Bitters with 10 rings above and 10 rings below the embossing and the later, more common, 14 rings in four segments, Hall’s Bitters (pictured to the left). I’m actually still working on my bottle room at this time. Once I have it completed, i’ll send you some photos of it. Pontiled sodas and mineral waters are the emphasis of my collection, but I also have some bitters that I really enjoy as I actually started out collecting them.

I don’t think I ever showed this one to you, check it out and let me know what you think? I have a few Hall’s Bitters in different colors, but this one I aquired at the Belleville, Illinois show last year. It just jumped out at me! It has the most “drip” I’ve ever seen on a Hall’s or any other barrel actually. The top sits crooked and I love it. Must have been the glassblowers first week! It’s also the darkest Hall’s I’ve ever come across. Have you ever seen a darker example? A really deep dark chocolate brown. The seller was kind of reluctant to part with it but i’m glad he did. 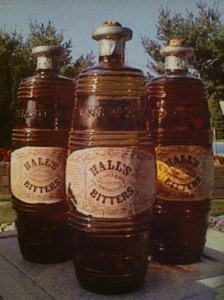 [source Bottle Pickers] There is not a lot of information about Edward E. Hall and his Bitters bottles. We do know that he was a grocer and that he produced a very popular Bitters which he put in a glass bottle shaped as a barrel, in New Haven, Connecticut. Here is what is listed in the New Haven City Directories.

The first barrel that Hall would use was embossed HALLS BITTERS (straight line Hall’s) with 10 rings above and 10 rings below the embossing. This barrel is the most sought after being the rarest of the two barrels that Hall used. His second style of barrel was embossed HALL’S / BITTERS // E. E. HALL’S NEW HAVEN / ESTABLISHED 1842. This barrel has 14 rings in four segments. This Bitters barrel was the most popular being listed as common in amber. 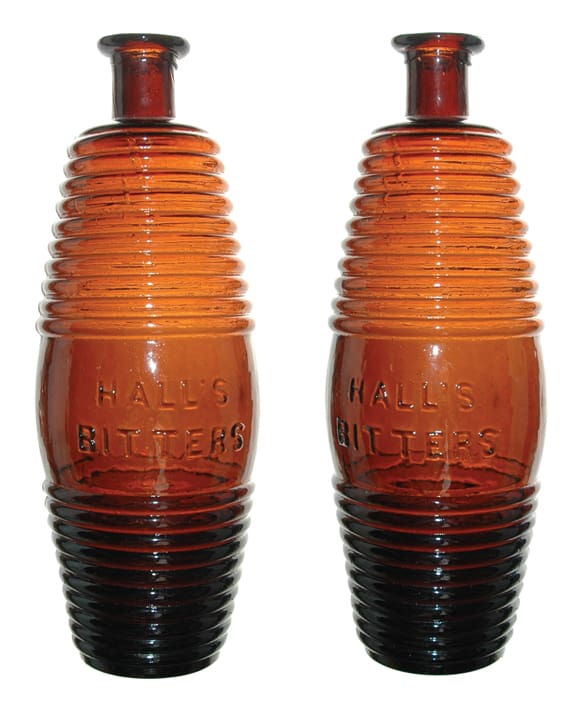 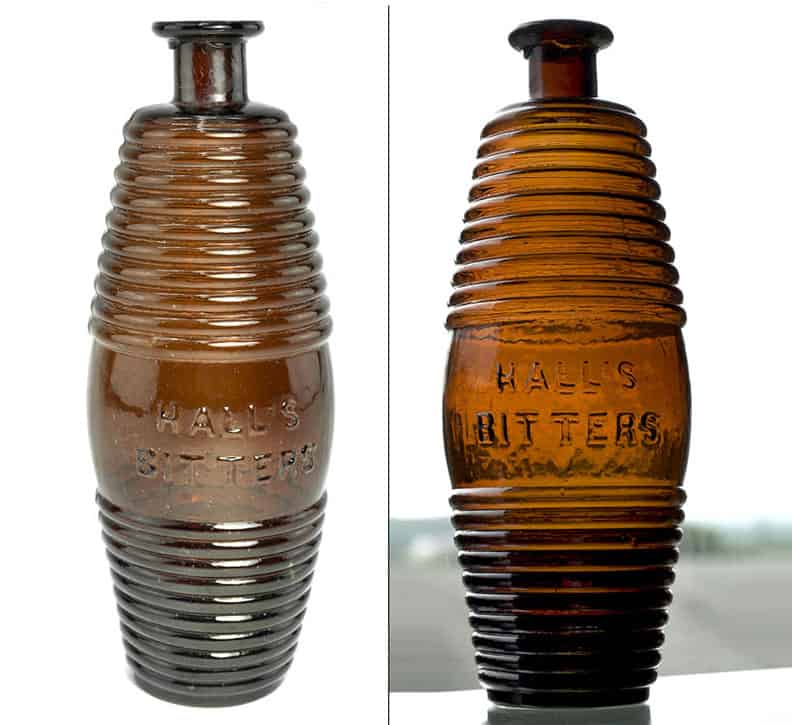 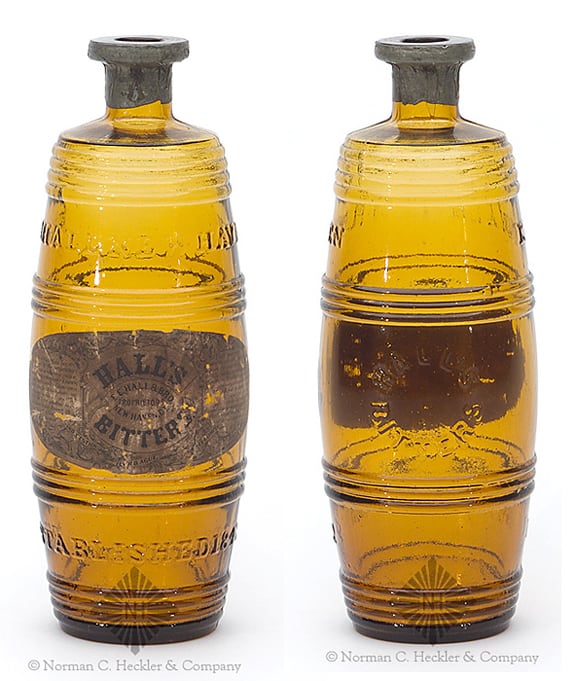 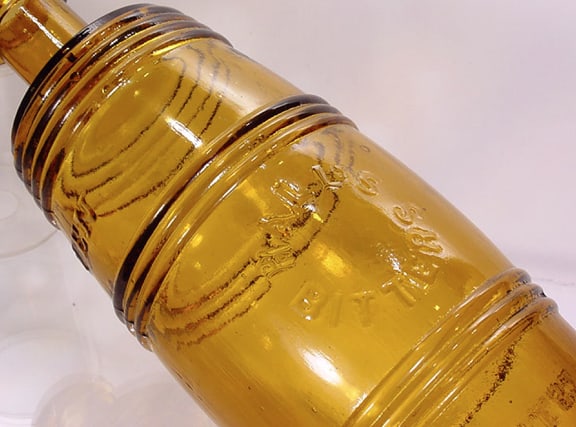 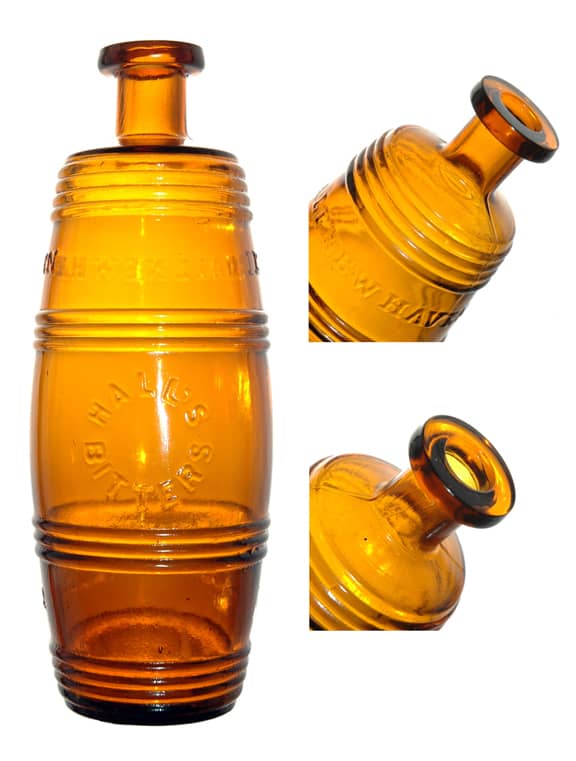 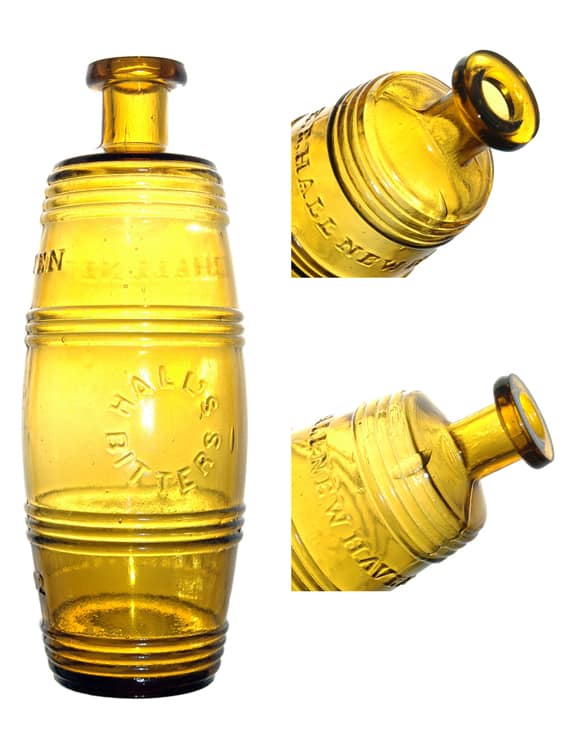 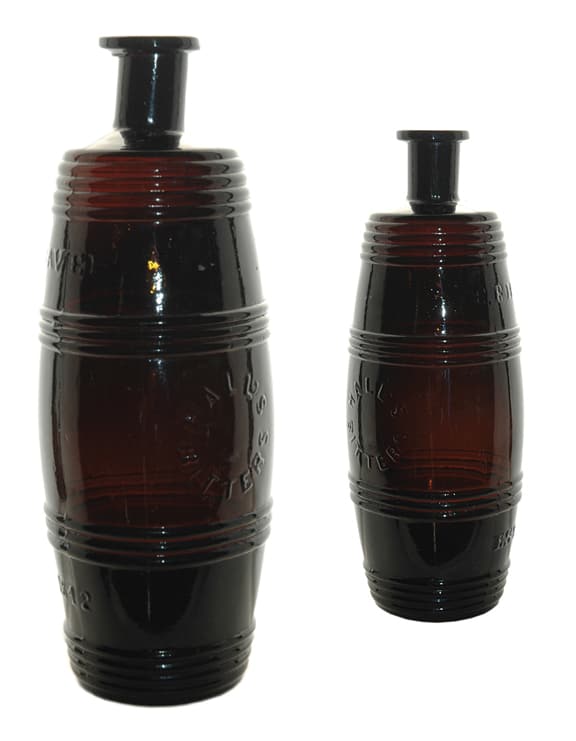 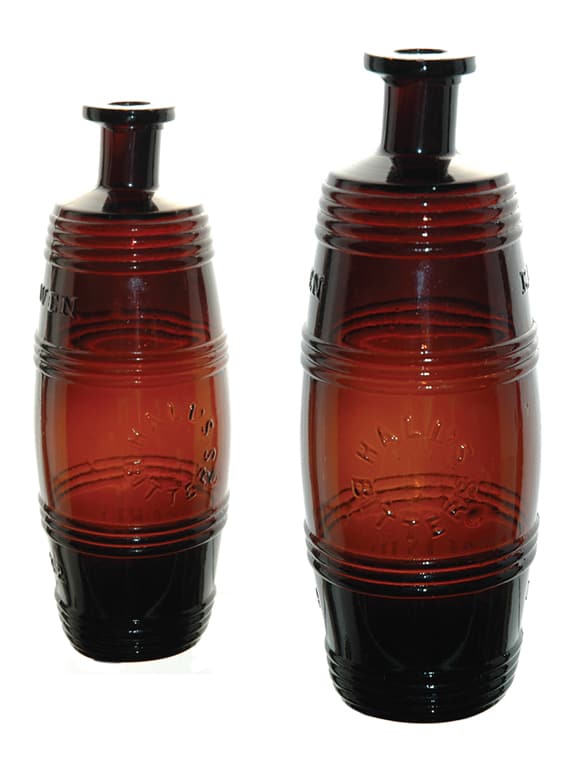 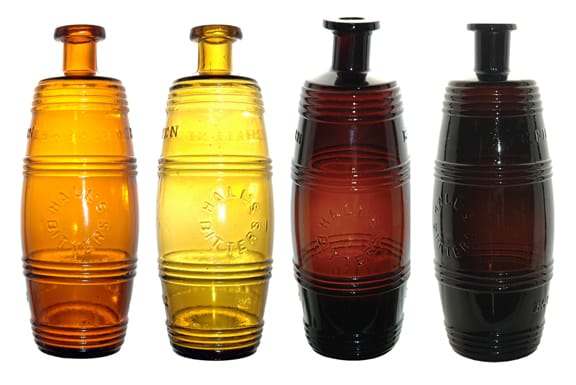 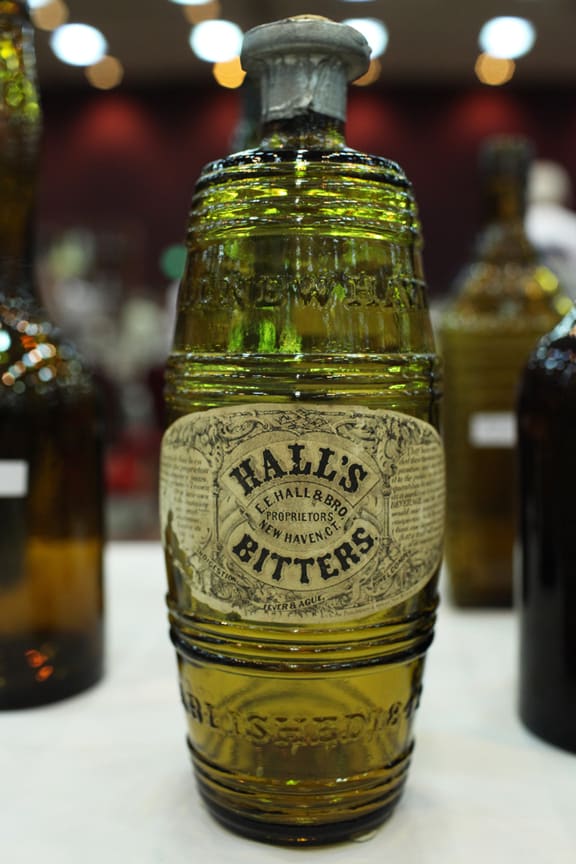 Ferdinand Meyer V is a native of Baltimore, Maryland and has a BFA in Fine Art and Graphic Design from the Kansas City Art Institute and School of Design. Ferdinand is the founding Principal of FMG Design, a nationally recognized design consultation firm. Ferdinand is a passionate collector of American historical glass specializing in bitters bottles, color runs and related classic figural bottles. He is married to Elizabeth Jane Meyer and lives in Houston, Texas with their daughter and three wonderful grandchildren. The Meyers are also very involved in Quarter Horses, antiques and early United States postage stamps. Ferdinand is the past 6-year President of the Federation of Historical Bottle Collectors and is one of the founding members of the FOHBC Virtual Museum.
View all posts by Ferdinand Meyer V →
This entry was posted in Bitters, Collectors & Collections, Color Runs, Figural Bottles and tagged Barrel, Connecticut, Edward E. Hall, Figural, GreatAntiqueBottles.com, grocer, Halls Bitters, Jack Stecher, Meyer Collection, New Haven, Norman C. Heckler. Bookmark the permalink.