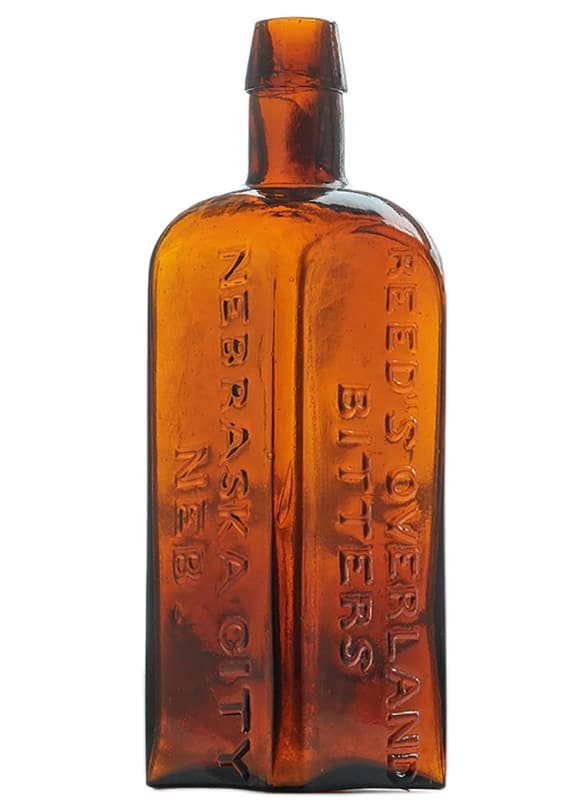 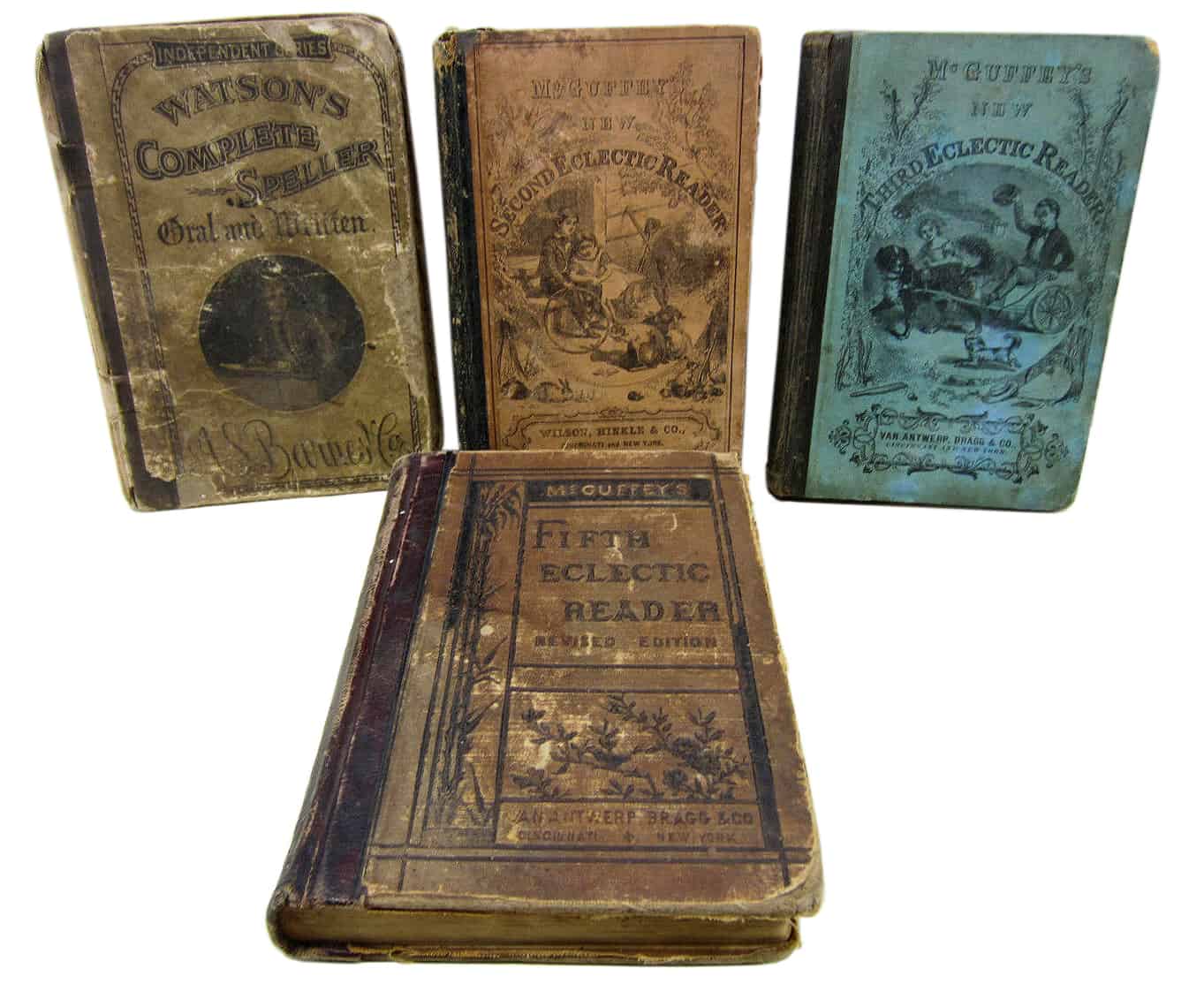 I like that, …”Dealers in Drugs & School Books” and also “Proprietors of Reed’s Celebrated Overland Bitters.” Here is another super tough, extremely rare bitters. I posted the 1870 advertisement below in Daily Dose last August. Now, as it turns out, a bottle example (pictured above) is in the current American Glass Gallery Auction #22. Thanks to Jeff Burkhardt for calling my attention to this bottle and inspiring this post.

If you notice on the advertisement, the Reed Brothers consisted of John Reed, James Reed and Michael Reed. Their establishment was located on 9th Street, West Side Market Space in Lincoln, Nebraska. Again, they were the Proprietors of Reed’s Celebrated Overland Bitters which is prominently noted on the bottom half of the ad which was found in The Nebraska State Journal on Friday, November 4, 1870. 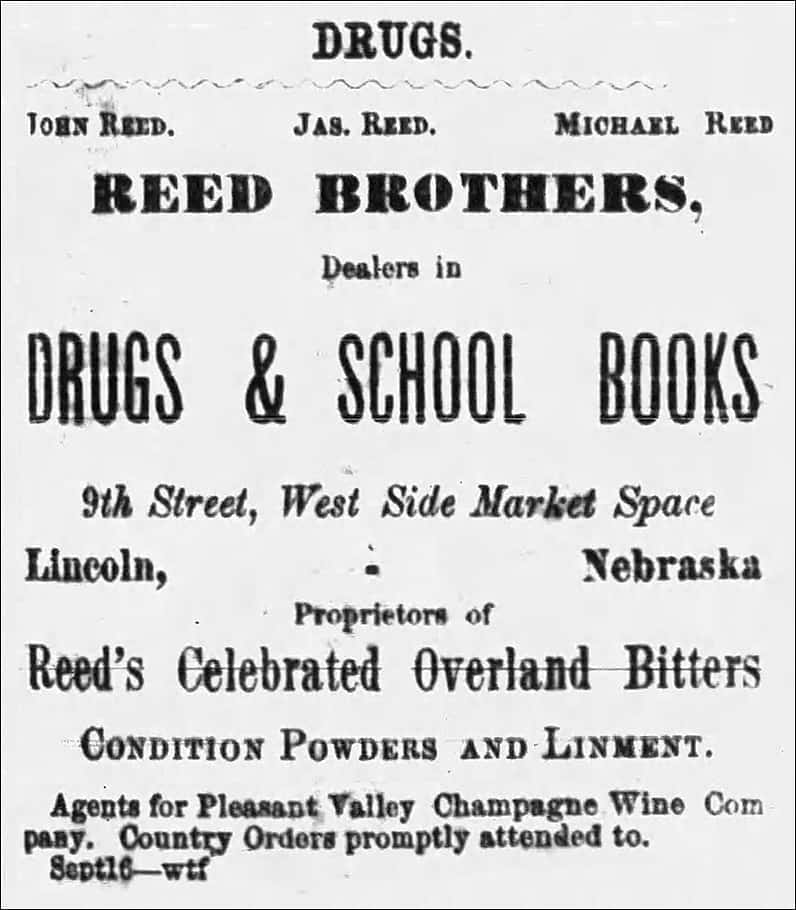 John Reed was the lead and oldest brother of the Reed Brothers. He was born around 1841 in Birmingham, England. His younger brothers, James and Michael were twins born on July 26, 1845, also in Birmingham. All three came to Nebraska City, Nebraska Territory with their mother in 1858. For whatever reason they settled in Nebraska Territory from England, I am unsure. I bet that was quite a change.

The first map below shows Nebraska Territory in 1854. The second map shows Nebraska City and what would soon be Lincoln, Nebraska. Omaha is also marked for reference. The third map is an illustrated map of the Pony Express Route in 1860 by William Henry Jackson, courtesy of the Library of Congress. If you enlarge, you can see Nebraska City as a branch line leading to Fort Kearny. The primary route stated in St. Joseph, Missouri and terminated in San Francisco.

Nebraska would become our 37th state on March 1, 1867 when the first wave of settlement gave the territory a sufficient population to apply for statehood. The capital was moved from Omaha to the center at Lancaster, later renamed Lincoln after the recently assassinated President of the United States, Abraham Lincoln. 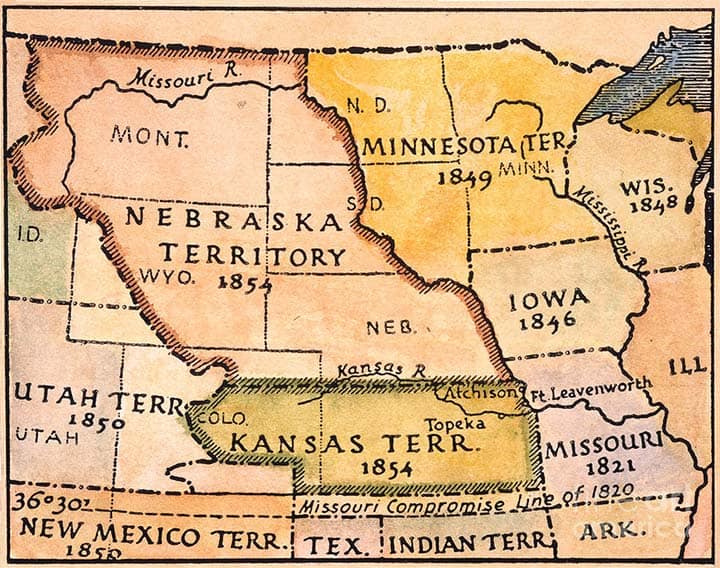 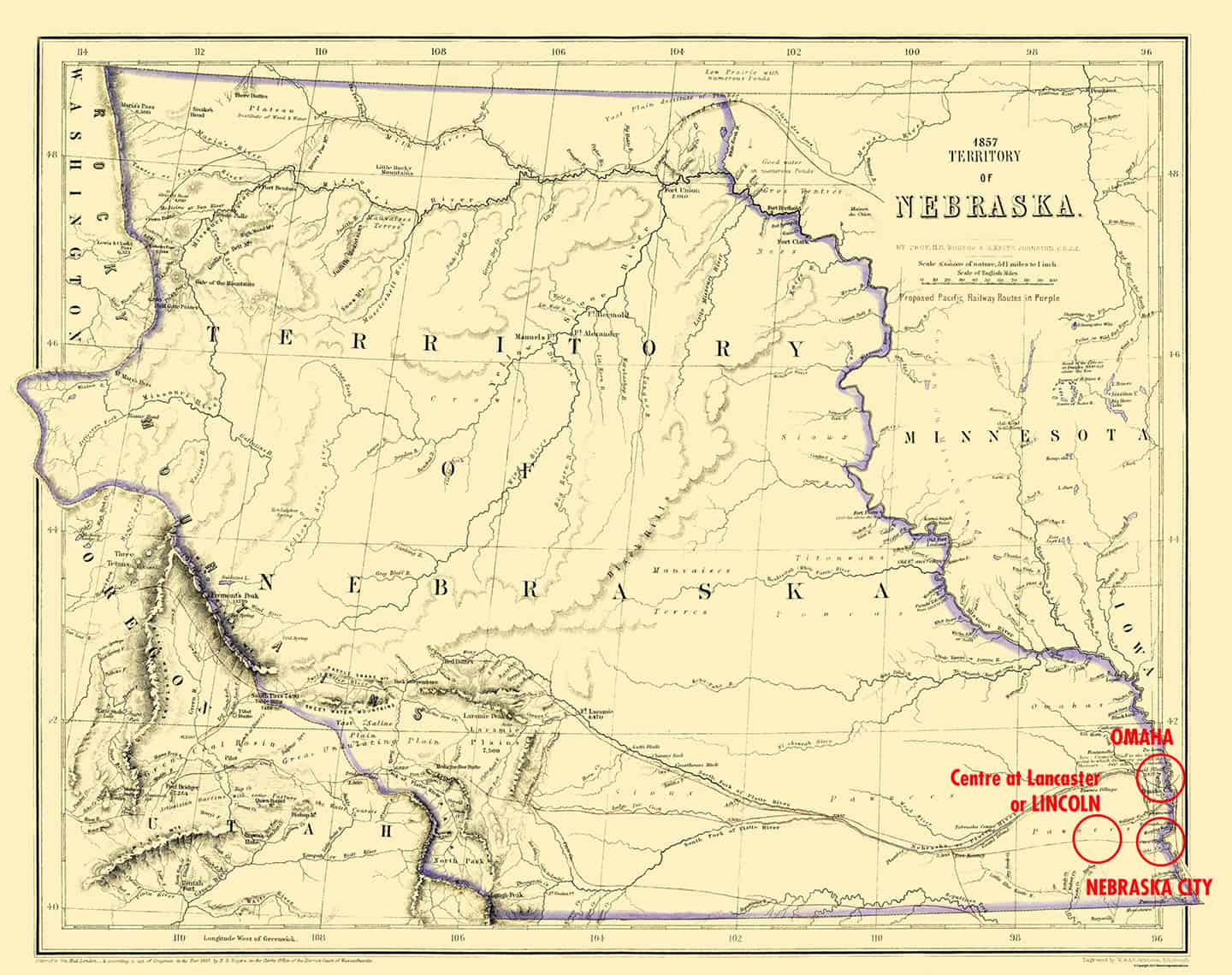 We next come across John Reed when he is noted as a 19 year old mail carrier in Nebraska City, Nebraska Territory in an 1860 United States Federal Census. He probably worked for the Overand Express or a subsidiary. The “Overland” reference would eventually be the name of a line of medicines the Reed Brothers would put out, and of course, a reference to their Overland Bitters.

It looks like the Reed brothers first went into the drug business clerking for the drug store of Daniel Whitinger in Nebraska City sometime in the early to mid 1860s. Whitinger was a physician and druggist who was born around 1830 in Indiana. Soon, John would become a partner and the drug store was renamed Reed, Whitinger and Co. They were listed as Wholesale and Retail Druggists in Nebraska City, Nebraska in 1868. John would have been about 27 years old. The twins, James and Michael, would continue to work as clerks. Eventually the firm of James Reed & Bros. was formed and continued for many years in Nebraska City. Whitinger would continue as a physician.

In the spring of 1867, the firm of Reed Brothers was organized and they were located in the newly named Lincoln, Nebraska. This was the only year that they were listed as the Proprietors of Reed’s Celebrated Overland Bitters. Lorenz & Wightman of Penn Glass Works in Pittsburgh, Pennsylvania made the bottles as you can see from the base embossing below. 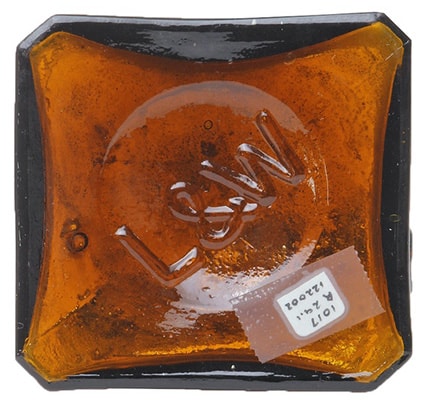 The Reed Brothers would continued until 1871 when S. S. Brock & Company were announced as the successors to Reed Brothers at the same address on West Side Market Square in Lincoln. James Reed, as noted above would carry the touch in Nebraska City. Market Square eventually became Haymarket Square which is represented below. 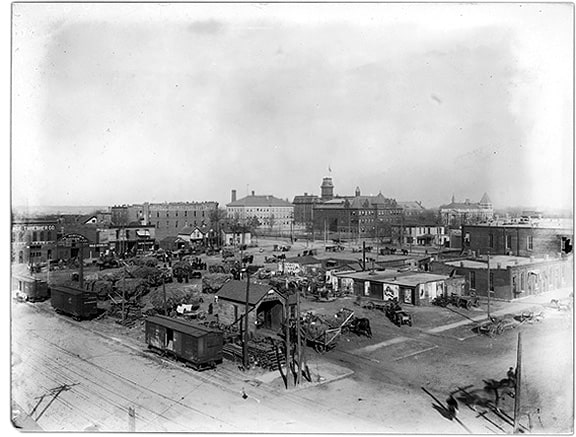 This exceedingly rare square from Reed’s Drug Store, Nebraska City, Nebraska, was obviously playing off the name of the famous Overland Trail. The Trail was also known as the Overland Stage Line, an 1860’s Western stagecoach and wagon trail that passed through parts of Nebraska.

37 The “Parallels” are published in F. B. Sanborn, The Life and Letters of John Brown (Boston: Roberts Bros., 1891), 481-83. Daniel Whitinger was a physi­cian and druggist, and Samuel P. Sibley was a shoemaker. Both became active in the Republican Party in the early 1860s and Sibley, as a member of the territorial legislature, voted for an act to abolish slavery in Nebraska. Whitinger’s biography is in Dale, “Otoe County Pioneers,” 2753-57; Sibley’s is in the same source, 2330-33. While these men’s Republican party affiliation suggests support for abolition, if they were Underground Railroad operatives they managed to avoid men­tion as such in any contemporary or recollective accounts. Interestingly, Whitinger owned a farm on the west edge of Nebraska City, about a mile from the Mayhew property. See U.S. General Land Office Tract Books, Vol. 152, NSHS. Garner, Reed, and Vincent have not been further identified. They do not appear in “Otoe County Pioneers.” 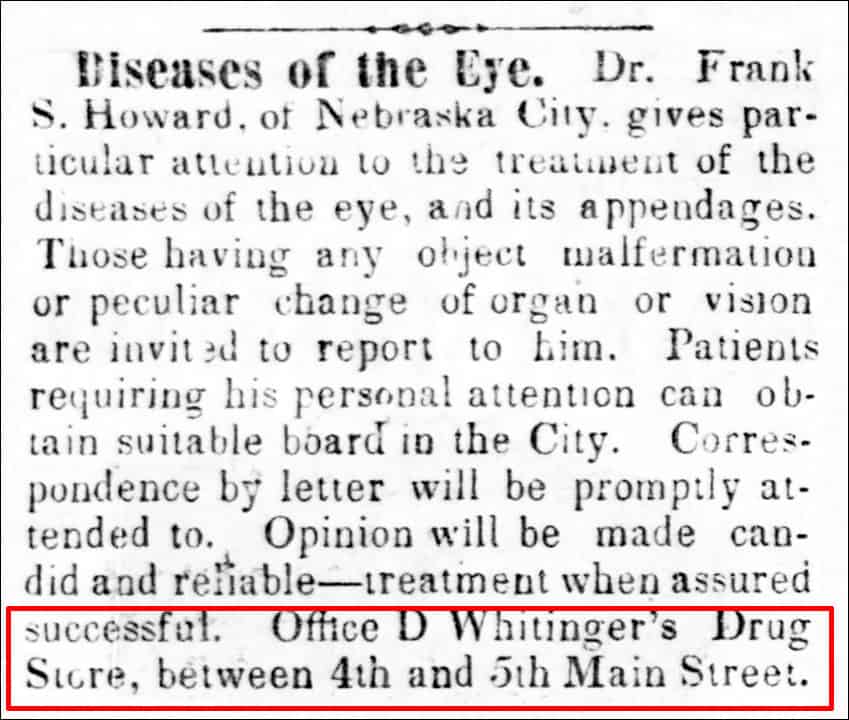 1867: Nebraska Statehood. The first wave of settlement gave the territory a sufficient population to apply for statehood. Nebraska became the 37th state on March 1, 1867, and the capital was moved from Omaha to the center at Lancaster, later renamed Lincoln after the recently assassinated President of the United States, Abraham Lincoln. 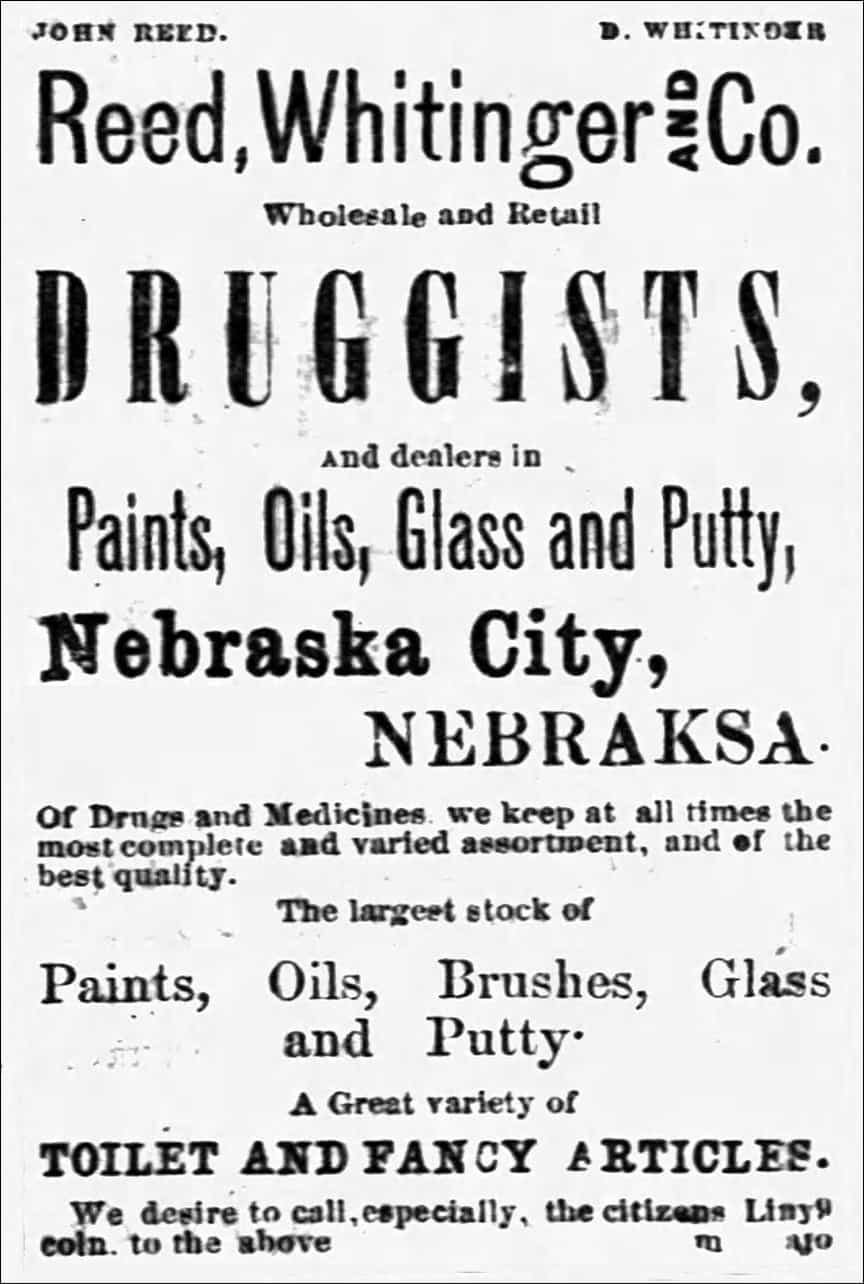 1869: Newspaper notice (below) “Jimmie” Reed, of the firm of Reed Bros., Nebraska City, arrived in town Thursday. looking healthy and parboiled like the rest of us. Reed Bros. stands at the head of the Drug Business in the South Platte Region – The Nebraska State Journal, Saturday, July 17, 1869 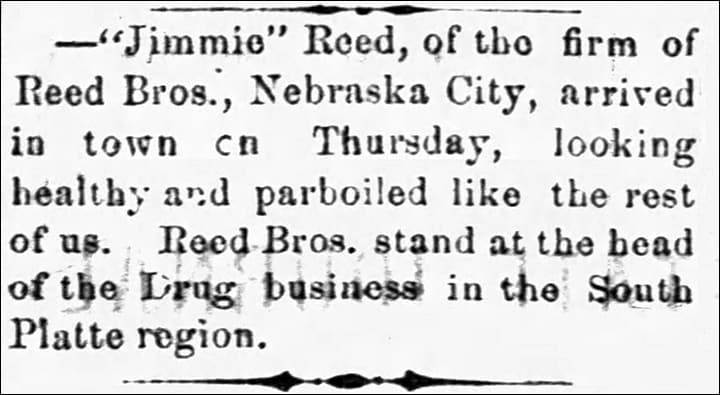 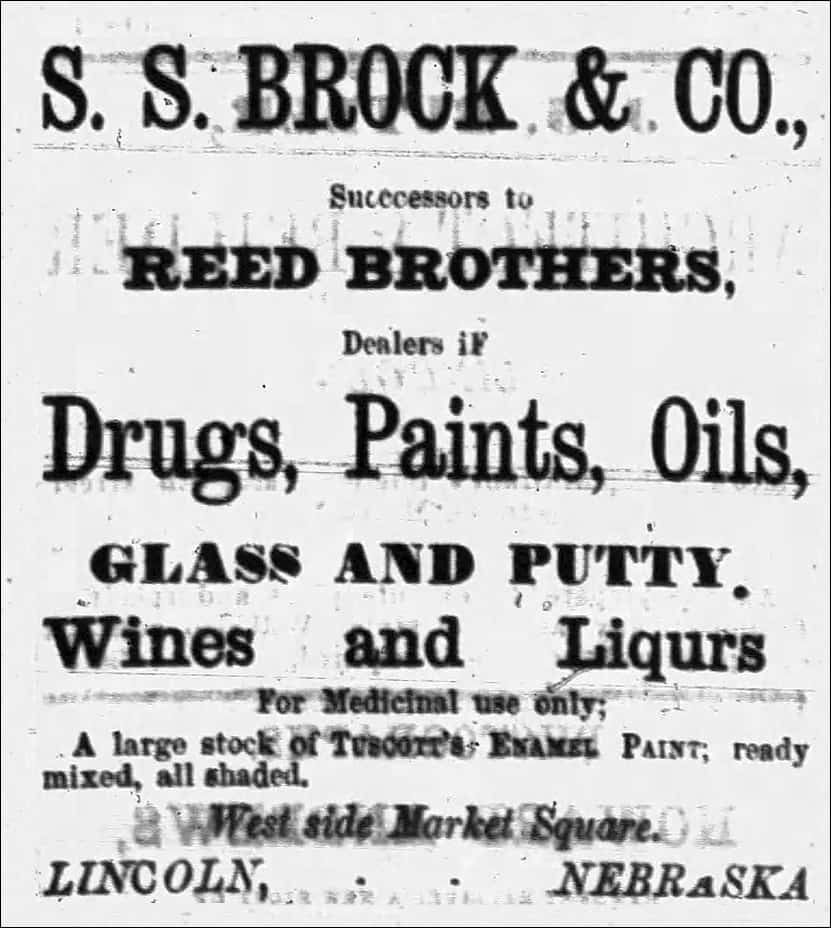 1872: Newspaper advertisement (below) Reed Bros., Druggists and manufacturers of proprietary medicines…fame of their “Overland” remedies extends from Missouri to beyond the mountains – The Nebraska State Journal, Wednesday, January 24, 1872 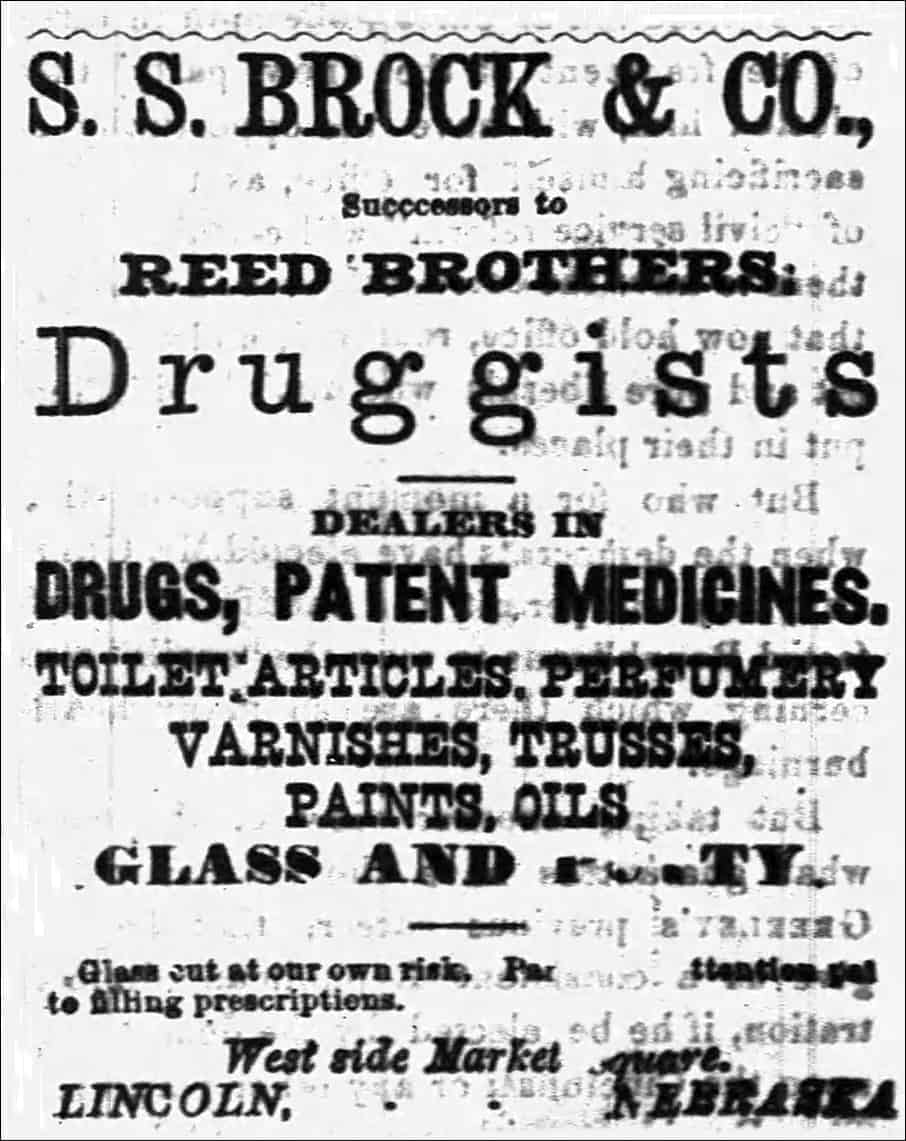