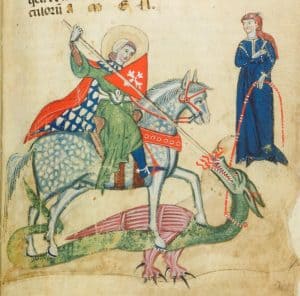 Here is a really cool, circa 1870, patent medicine label (below) that the Library of Congress is holding for William B. Dorman’s Original Red Cross Bitters. Pictured is a crusader in armor with a red cross on the shield. The New England Lithography Company in Boston printed the piece.

In heraldry, Saint George’s Cross, also called the Cross of Saint George, is a red cross, usually on a white background, which from the Late Middle Ages became associated with Saint George, the military saint, often depicted as a crusader.

William Barnes Doorman was born on 20 April 1835 in Boxford, Massachusetts. His father was William H. Dorman and his mother was Sarah Barnes. They were married on 19 April 1832 and lived in Boxford, which was a small town north of Boston.

We first see records of William B. Dorman, noting his occupation as a painter, when he enlisted, at age 28, on 01 December 1863, for the Civil War. He was noted as a Private in Company C, Massachusetts 59th Infantry Regiment on 14 January 1864 and mustered out on 13 January 1865. During this time he was promoted to Full Hospital Steward. This must have been his introduction to medicine.

Next we find an agreement of a bill of sale from Benjamin. S. Dodge to William B. Dorman, dated 04 September1867 where Dodge assigns and conveys to Dorman the right to manufacture and sell the famous Atwood Bitters medicines for the term of five years. A nice lead-in to Dorman’s own bitters.

In 1870, we see the patent medicine label for his Red Cross Bitters. He is listed in U.S. census records that year as a retail druggist located on Main Street in Georgetown, Massachusetts which is due north of Boxford and Boston.

By 1880, we see the addition of perfumer and chemist to his druggist occupation and he was operating out of Boston. He would continue with his retail trade up until 1895 or so. Dorman would die on 13 April 1913 in Everett, Middlesex County, Massachusetts.

This bitters appears to be unlisted. I am not aware of any examples.

Label
R 17.5 Original Red Cross Bitters, Will. B. Dorman
Crusader in armor with a red cross on the shield.
The New England Lithography Company in Boston.
William Barnes Dorman was listed in U.S. census records in 1870 as a retail druggist located on Main Street in Georgetown, Massachusetts which is due north of Boxford and Boston. In 1870, we see the patent medicine label for his Red Cross Bitters. In the 1880 census, he is adds perfumer and chemist to his druggist business. He would continue with his retail trade up until 1895 or so.

1867: Agreement of bill of sale from Benj. 8. Dodge to W’m. B. Dorman, dated Sept. 4, 1867. Memorandum of an agreement made this fourth day of September, A. D. 1867, between Benjamin S. Dodge, of Rowley, in the county of Essex and commonwealth of Massachusetts, and William B. Dorman, of Georgetown, in said county. [Records and Briefs of the United States Supreme Court, Volume 108, 1879]

First. The said Dodge hereby assigns and conveys to said Dorman the right to manufacture and sell Atwood’s [Bitters] Medicines, so called, for the term of five years from the date aforesaid, and to use the trade-marks he has heretofore used in the sale of said [bitters] medicines.

Second. The said Dorman agrees to give and deliver to said Dodge one-twelfth of all the Atwood’s [Bitters] Medicines he shall manufacture during said term, or pay said Dodge the value of one-twelfth in money.

Third. It is agreed that said Dodge may at any time become jointly interested with said Dorman in the manufacture and sale of said [bitters] medicines, by furnishing one-half of the capital; and in such a case each shall have an equal share of the profits and bear an equal part of the losses.

Fourth. If the said Dorman before the expiration of said term shall wish to cease to manufacture and sell said [bitters] medicines, he shall have that privilege on giving said Dodge notice of the same, and then all rights hereby conveyed shall revert to said Dodge.

Fifth. During the continuance of said term said Dodge shall have no right to manufacture said [bitters] medicines, unless a notice from said Dorman that he has ceased to manufacture them be received by said Dodge.

Executed and delivered in the presence of Caroline L. Dodge.

Ferdinand Meyer V is a native of Baltimore, Maryland and has a BFA in Fine Art and Graphic Design from the Kansas City Art Institute and School of Design. Ferdinand is the founding Principal of FMG Design, a nationally recognized design consultation firm. Ferdinand is a passionate collector of American historical glass specializing in bitters bottles, color runs and related classic figural bottles. He is married to Elizabeth Jane Meyer and lives in Houston, Texas with their daughter and three wonderful grandchildren. The Meyers are also very involved in Quarter Horses, antiques and early United States postage stamps. Ferdinand is the past 6-year President of the Federation of Historical Bottle Collectors and is one of the founding members of the FOHBC Virtual Museum.
View all posts by Ferdinand Meyer V →
This entry was posted in Bitters, Druggist & Drugstore, History and tagged atwoods, bitters, Boxford, chemist, crusader, Druggist & Drugstore, essex, Georgetown, label, Massachusetts, military, perfumer, Private, Red Cross, Saint George, shield, William B. Dorman. Bookmark the permalink.