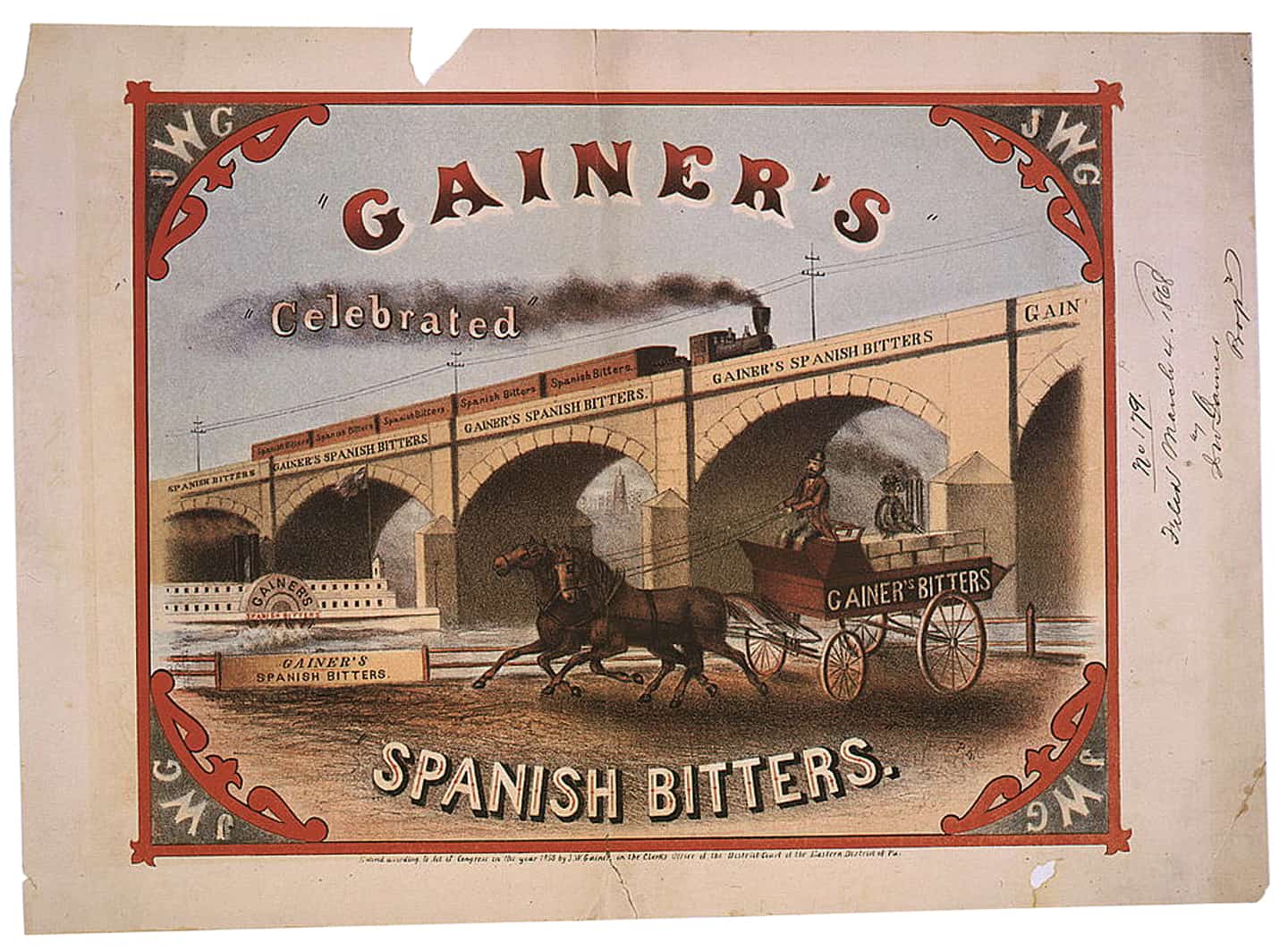 The Library of Congress holds this great advertising patent proof lithograph label for Gainer’s Celebrated Spanish Bitters (above) being transported by a passenger train, steamboat and horses and wagon emblazoned with the product name. A product sign is even on the river railing. I started searching for information online and found a few other Spanish Bitters. Let’s take a quick look at them starting off with the Gainers. They are all extremely rare, some unlisted.

Close inspection of the advertising proof (top) for Gainer’s Celebrated Spanish Bitters reveals hand writing on the right side of the print. The copy reads, “No. 179, Filed March 4, 1868 by J.W. Gainer, Prop(rietor). You can see his initials in the decorative frame corners. The super fine print beneath the red horizontal base line reads something like, “at Congress in the Year 1868 by J.W. Gainer in the Clerks Office of the District Court at the Eastern District of Pa.” With this information, I can find a listing for James W. Gainer, Bitters located at 806 N. 19th, in Philadelphia, Pennsylvania in a 1868 Philadelphia, City Directory. That is about it. No bottles or any other direct support material. Just a blip, albeit big one, on the bitters radar. 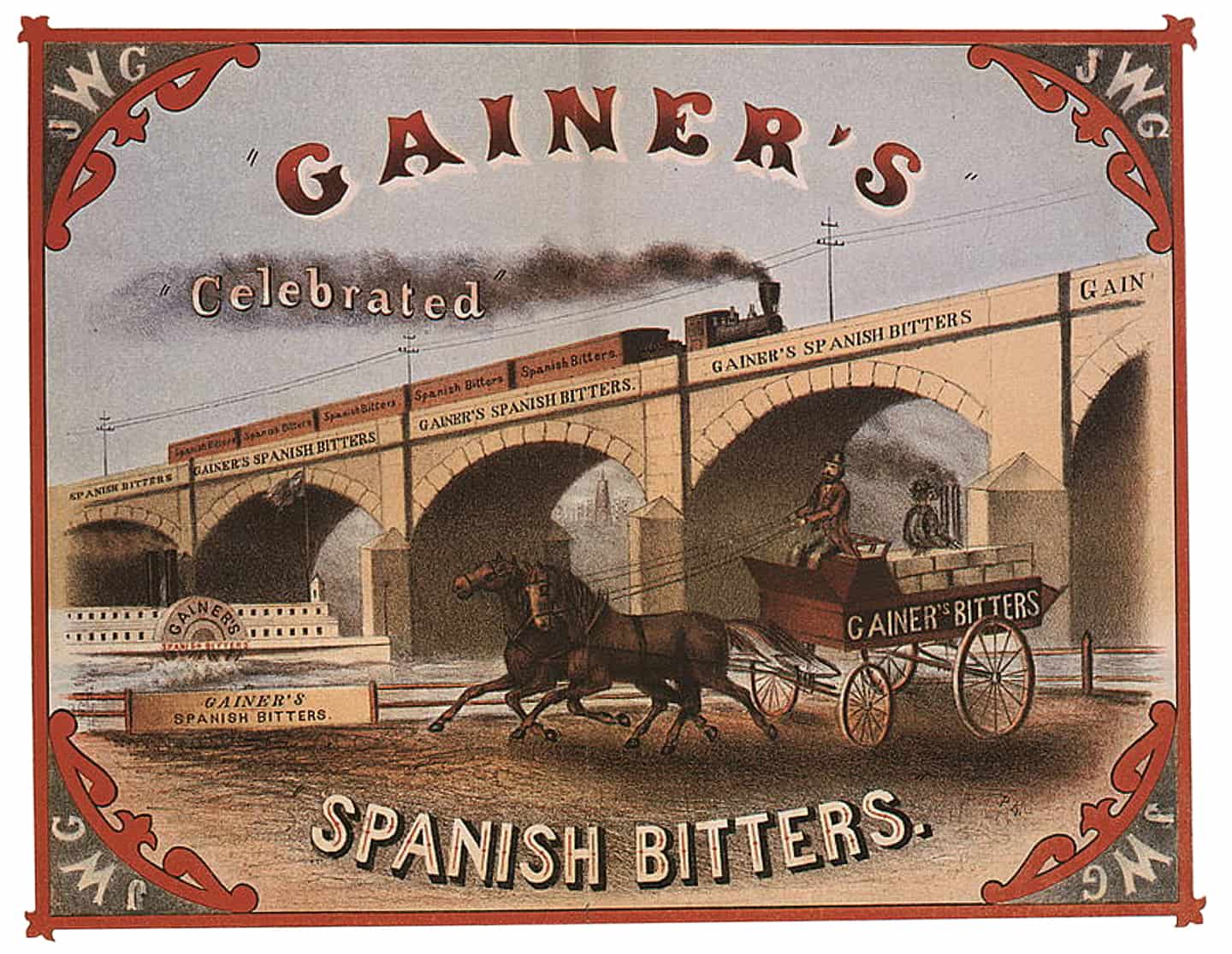 I found the newspaper advertisement below for Garlichs’ Spanish Bitters in the Albany Ledger on September 22, 1870. The bitters was manufactured by H.M. Garlichs in St. Joseph, Missouri and could be used for Costiveness, Fever and Ague, Dyspepsia, Intermittents, Female Diseases etc. 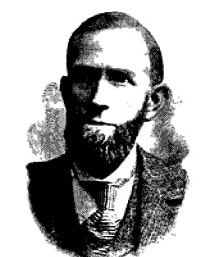 Herman Maximillian Garlichs was a well-known druggist in St. Joseph, Missouri from 1860 until his death in 1898. He was born on 09 October 1839 in Liberty, Clay County, Missouri and his parents were from Bavaria. He followed his father A.H. Garlichs, also a physician, in the drug business. They also both engaged in the foundry business, the firm being known as Monroe Iron Works. Garlichs was also a delegate to the St. Louis convention of the National Retail Druggists’ Association and was well known in St. Joseph as a financier and a figure in Democratic state politics.

In appearance, Garlichs was tall and spare, and his rather sharp features were accentuated by bis closely-cropped red beard and shaven upper lip. In 1870, he was advertising Garlichs Spanish Bitters. Why he chose this name, I have no clue. Maybe it was his red beard. I can find no bottles or any other direct support material.

Mr. Garlichs was found dead in his drug store on Seventh and Felix streets in St. Joseph from a hemorrhage of the lungs, shortly after 12 o’clock, noon on Christmas day in 1898, and died before a physician could reach his side. His son, Fred A.H. Garlichs would continue the drug store business and was also president of the St. Joseph Drug Co. in 1900.

This bitters appears to be unlisted. 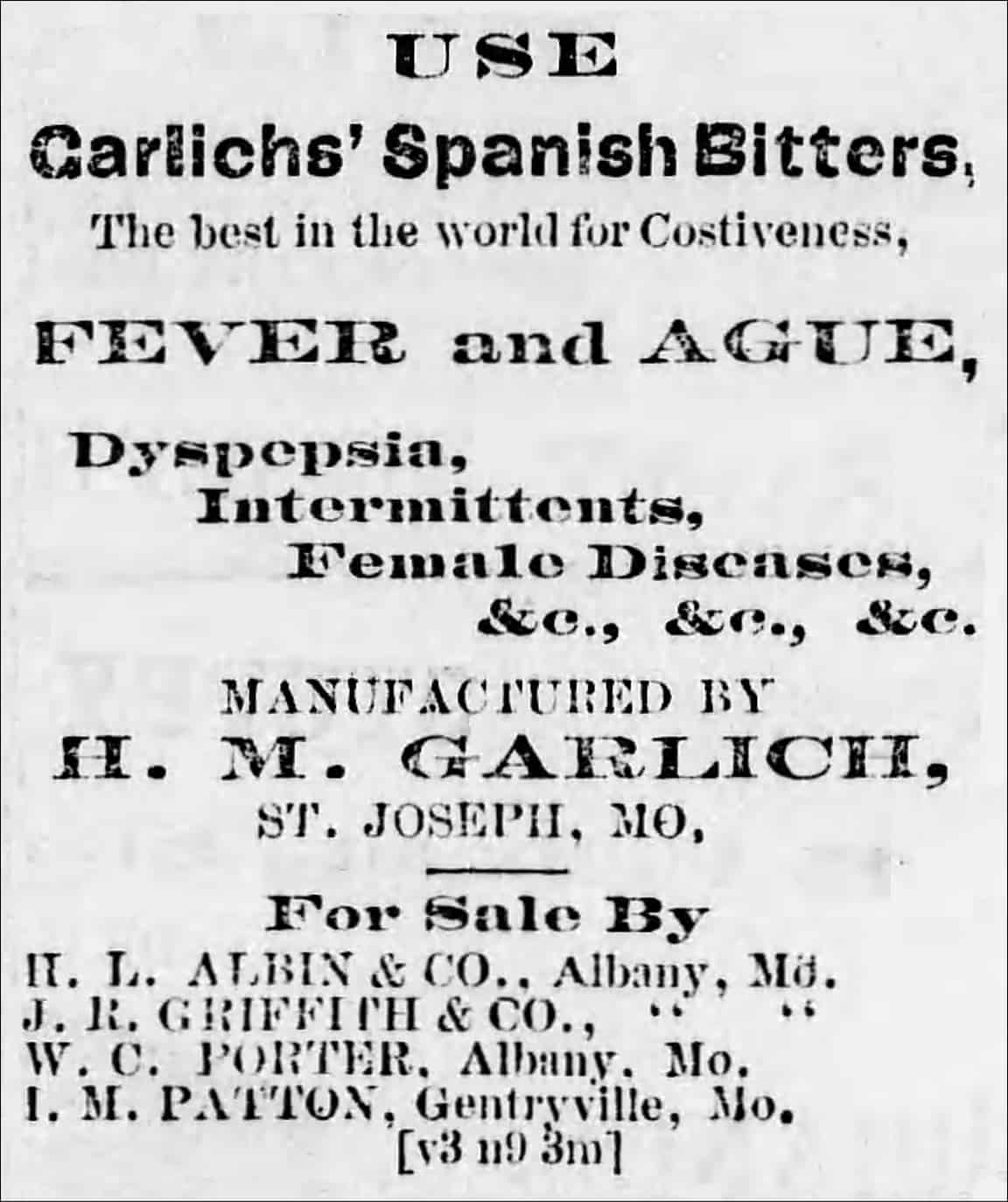 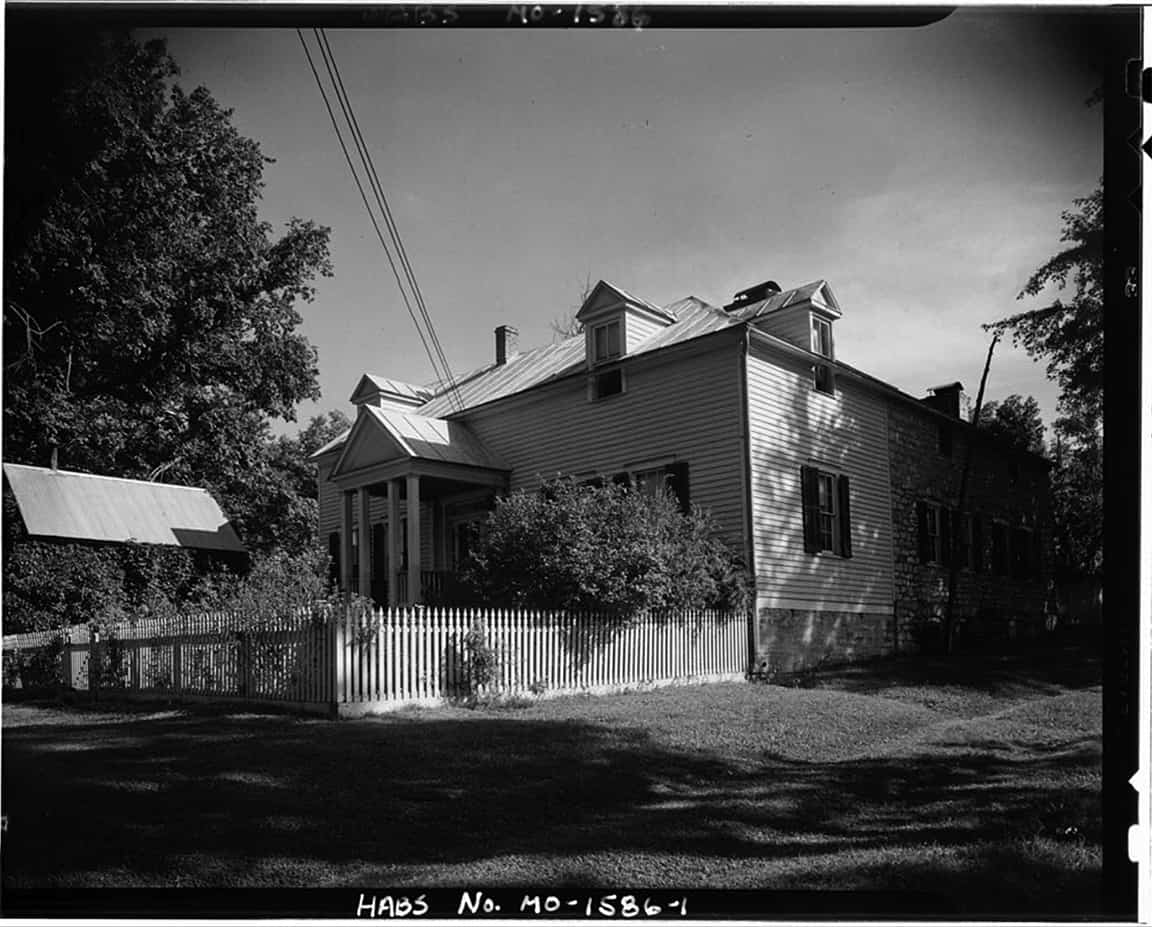 Here is another blip on the bitters radar for the Celebrated Spanish Bitters of Dr. Zavia which was advertised in the Carolinas for southern soldiers of the great Civil War. The Tomato or Tomatto is referenced so there is our connection to Spanish Bitters I suppose. Maybe the name Dr. Zavia too. I can find no information on him or any other material on the bitters. This bitters appears to be unlisted. 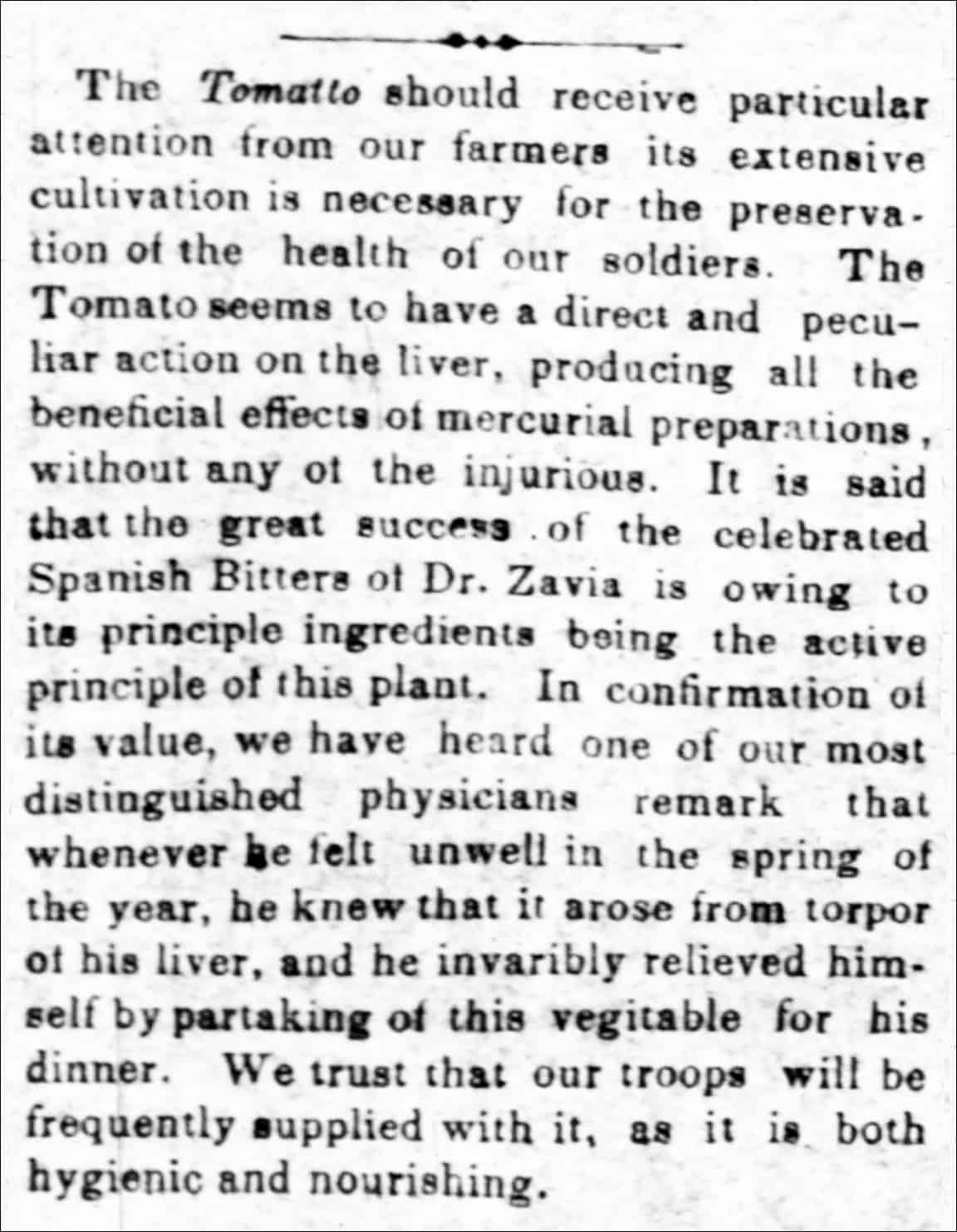 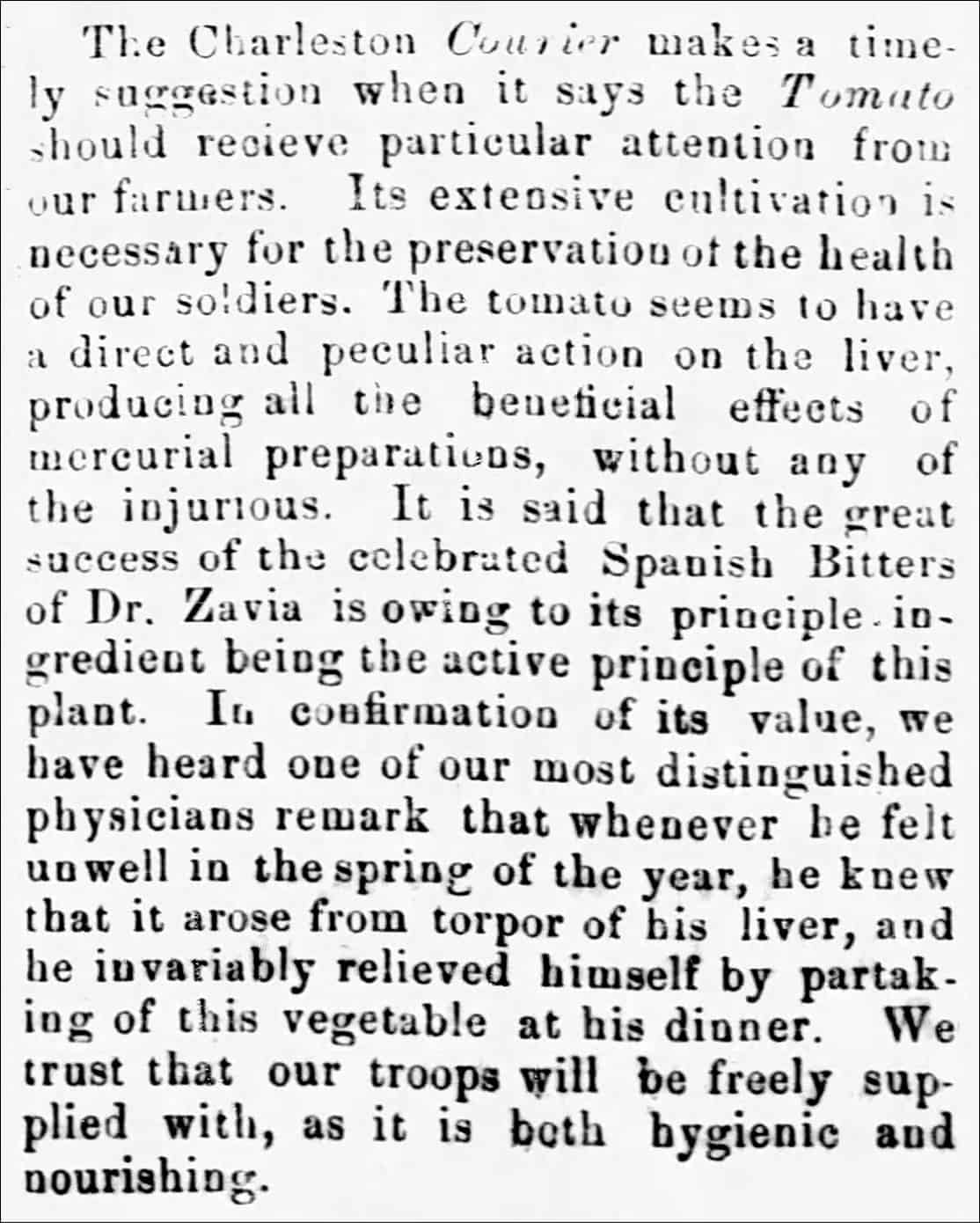 Here is another Celebrated Spanish Bitters put out by P.C. Armstrong and S.C. McClain located at No. 38, corner of Fourth and Bridge Avenue in Camden, New Jersey. Very little information on the bitters and P.C. Armstrong other than the two ads below from 1866 and 1867 and an 1866 Tax Assessment noting that Armstrong was a physician. This bitters appears to be unlisted.

Hard to tell by looking at the advertisement below what Spanish Bitters we are talking about, just that Max Lichtenthal was representing and possibly importing Celebrated Spanish Bitters in 1874 in Santa Fe, New Mexico. Looks like he migrated west starting in New York and ending in San Francisco with stops in Santa Fe and Colorado. The name makes more sense here. Lichtenthal’s Spanish Bitters appears to be unlisted. We will hold off giving it an R&H number until more information is obtained. 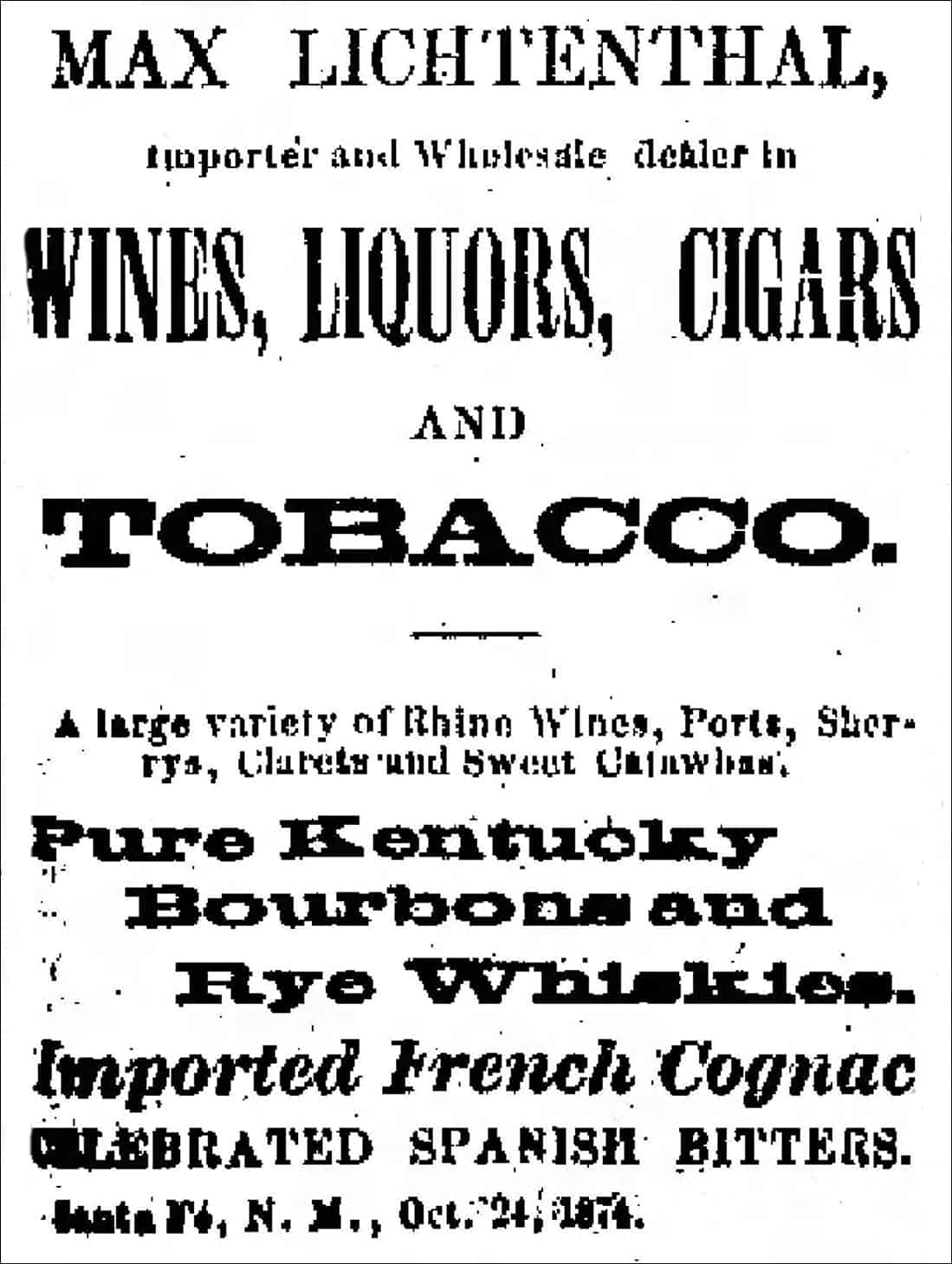