I was going through some material the other day that I gathered for the recent Dr. Henry Baxter’s Mandrake Bitters post which referenced the Atwood’s Jaundice Bitters bottle. You see, both bottle shapes are similar. I was curious, who was Moses Atwood?

It turns out that there were two primary Moses Atwoods operating about the same time in New England. Both were in medicine and started out in New Hampshire. This was confusing at first and I wanted to sort it out.

This is not our Moses Atwood of Atwood’s Jaundice Bitters fame. Here we are talking about Dr. Moses G. Atwood from New Hampshire. Moses was the son of Paul and Judith (Stickney) Atwood. He was born on April 6, 1801.

Dr. Atwood began the practice of medicine in North Lyndeborough in 1827 and studied medicine with Dr. Israel Herrick of Lyndeborough and Dr. Luther Farley of Francestown, New Hampshire. All of the towns mentioned are due west or southwest of Manchester, New Hampshire. Until 1841, Atwood practiced allopathy (treatment of disease by conventional means), and in that year he commenced study with Dr. Samuel Gregg of Boston and became one of the first Americans to practice homeopathy (the treatment of disease by minute doses of natural substances that in a healthy person would produce symptoms of disease) in New Hampshire and the tenth in New England. He was also involved in the printing business and must have owned a print shop as I can find a number of references supporting this notion.

In 1848, Dr. Moses Atwood came to New Boston from Concord, New Hampshire, there removed to Deering and from Deering to Francestown, New Hampshire where he had a very extended practice, probably equal to that of any physician in the county.

Dr. Moses Atwood died in New Boston on April 28, 1850. As a physician, he ranked high and was much esteemed for the many excellencies of his character. He had one son, Luther Parley Atwood of Francestown. 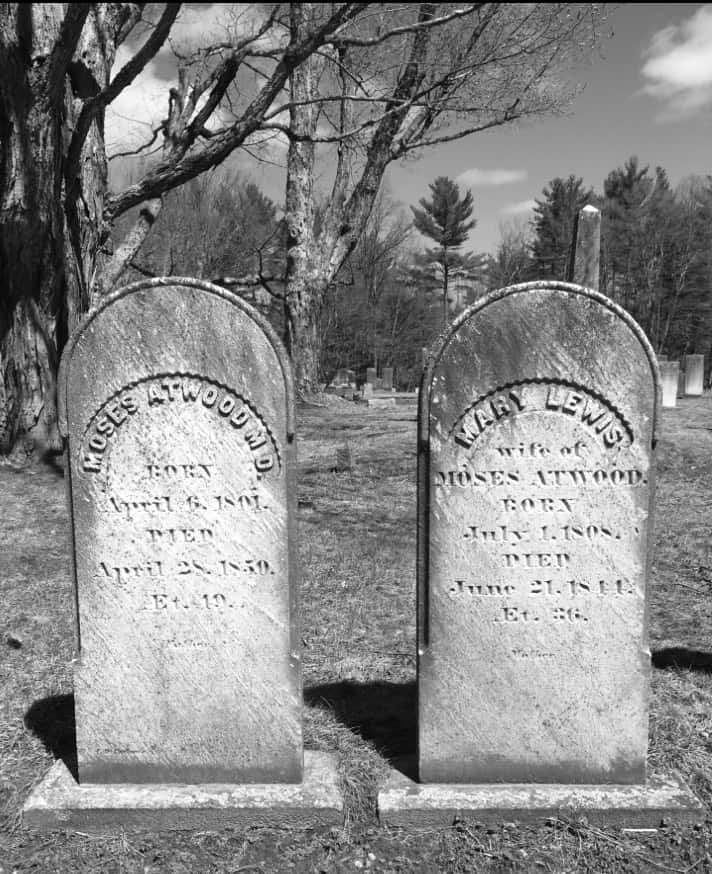 It would be convenient to say that Moses G. Atwood was our Moses Atwood’s (of bitters fame) father, but he wasn’t. I am having trouble tying them together. 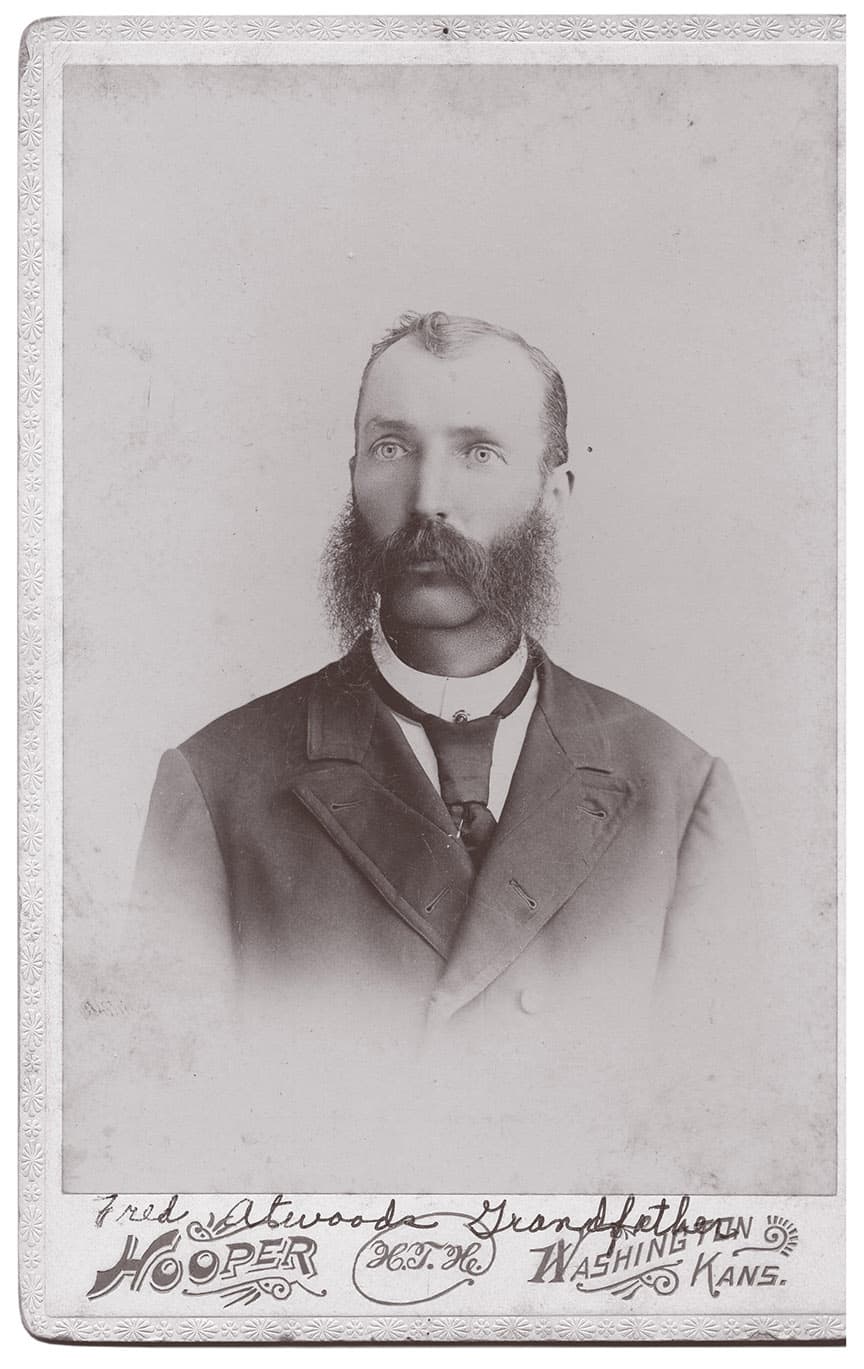 This image has been floating around the internet and the file is labeled Moses G. Atwood. This is incorrect. This is probably our bitters guy, Moses D. Atwood as the picture was taken in Washington, Kansas.

Moses had a limited education in his boyhood and at the age of sixteen began the study of medicine with Dr. Symmes Sawyer of Grafton County. At the age of nineteen, he began life for himself in a small way and slowly improved his financial condition. I am not sure how he obtained his M.D. credentials but back then, it really wasn’t hard to call yourself a doctor if you looked like, and practiced like, a doctor.

In 1842, Moses Atwood moved to Georgetown, Massachusetts and initially partnered with Jannaince where he commenced with the manufacture of his Atwood’s Bitters. The newspaper clipping below notes this. Bateman was a druggist. His son, L. H. Bateman would continue the business. 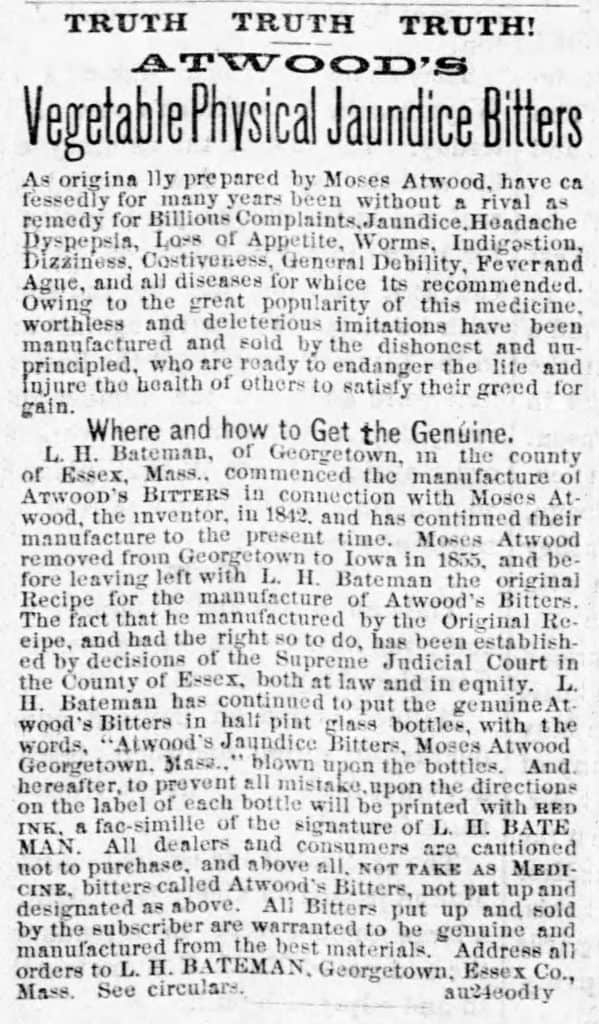 In 1852, Moses Atwood sold the original recipe for his bitters to Moses Carter (see bottle above) and Benjamin Dodge of Georgetown and moved to Iowa where he lived until about 1860. Moses Carter and his son, Luther F. Carter, continued manufacturing several varieties of bitters and also produced native wines and various flavored extracts. The items were peddled from door to door by a salesman who rode around the area with a horse and buggy. The Atwood medicines were manufactured at Georgetown until 1855. During the last three years of their manufacture there, their sales amounted to over $20,000 per annum which was quite a bit back then.

In 1860, Moses F. Atwood, the 21-year old son of Moses D. Atwood, moved back to Georgetown from Iowa. He began working with the Bateman family to manufacture Atwood’s Bitters. He listed his occupation in the 1860 Census as “M.D.”

In 1861, Moses F. Atwood would sell the recipe for preparing and compounding Atwood’s Bitters in the State of Maine to Nathan Wood. He called his bitters Atwood’s Genuine Bitters and had his name and brand embossed on the shoulder and base of a cylindrical bottle (pictured above). In 1875, Luther Carter (representing heirs of the Carter and Bateman families) would sell the patented recipe for Atwood’s Bitters to Manhattan Medicine Company in New York. This must have created problems for in 1878, Manhattan Medicine Company sued Nathan Wood for trademark infringement in the Federal Circuit Court of Maine. Nathan Wood would prevail. This happened a couple of times with the same results. 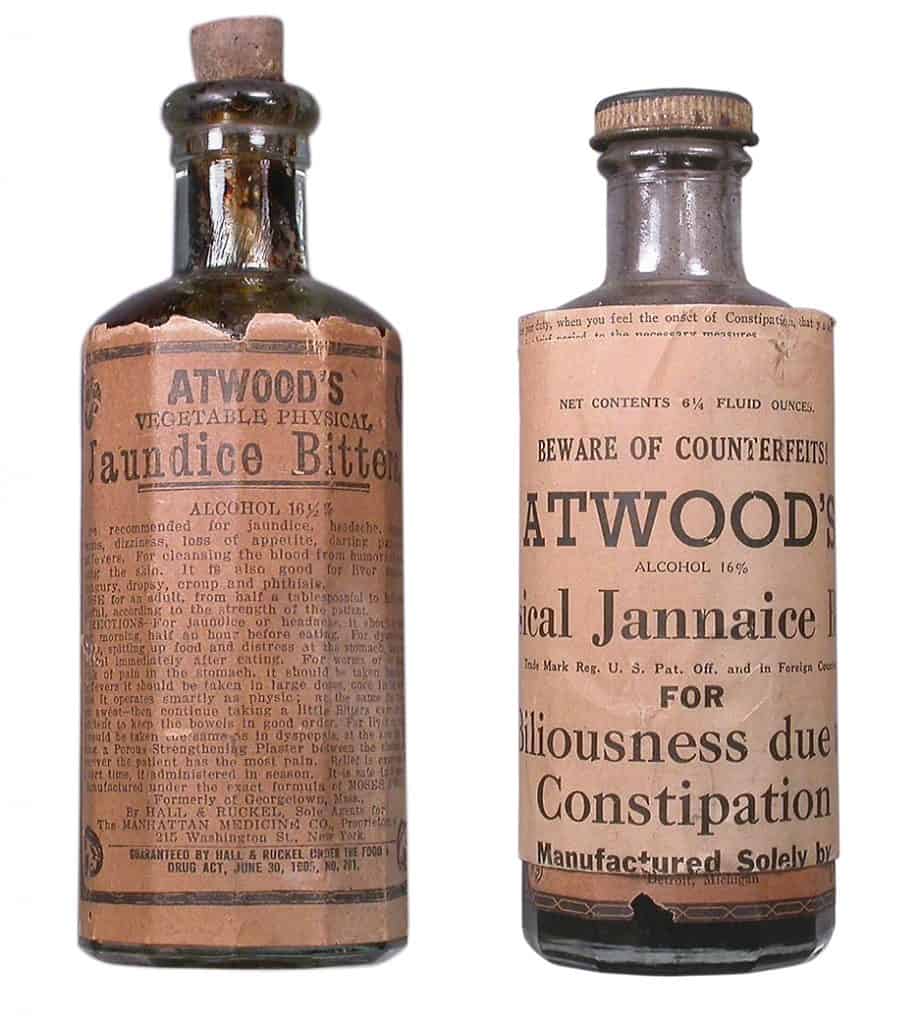 Left: A labeled Atwood’s Vegetable Physical Bitters Jaundice Bitters. Right: 1931-1939, Atwood’s Physical Jannaice Bitters. The indications or uses for this product as provided by the manufacturer are: For biliousness due to constipation. Recommended as a laxative, stomachic and carminative, for use in constipation and sour stomach resulting in headache. Wyeth Chemical Company, Detroit, Michigan. alcohol 16% (drug active ingredients)

The product was still evident in 1933. as Wyeth Chemical Company was putting it out. See picture above. Our Moses Atwood would die on 23 July 1892. What a testament to a great product that spanned almost a century, though in different hands.

MOSES ATWOOD, M.D., is the inventor of the celebrated “Atwood’s Medicines” which have been so well and favorably known for the past thirty years. The Doctor, though a man of advanced years. is as thoroughly interested now as in his earlier life, in behalf of suffering humanity. The millions of people to whom his remedies have given relief from pain and a new lease of life, may well look upon him in the light of a public benefactor.

The paternal grandfather of our subject was James Atwood, a native of Hampstead, N. H., and a farmer by occupation. The maternal grandfather was Levi Francis, of New Hampshire, and of French descent. The parents of our subject were Levi and Betsey (Francis) Atwood, natives of Rockingham County, N.H., the father having been born in the town of Hampstead. They were married in their native State. Levi Atwood was a Baptist minister, and like all pioneer preachers hard-working and self-denying. After a residence in several New Hampshire towns he finally settled at Nashua, where he died at the age of ninety-three years. The parental family consisted of nine childrcn, four of whom are now living.

The gentleman of whom we write was the third child of his parents, and was born April 24, 1810, at Thornton Grove, Grafton Co., N. H. He had but a limited education in his boyhood, but at the age of sixteen began the study of medicine with Dr. Symmes Sawyer, of Grafton County. At the age of nineteen he began life for himself in a small way and slowly improved his financial condition.

The Atwood medicines were, previous to the year 1855 were manufactured at Georgetown, Mass, and during the last three years of their manufacture there, their sale amounted to over $20,000 per annum. In June, 1855, the Doctor came West to attend to some business affairs not connected with his proprietary medicines and settled in Iowa, where his remedies are now manufactured. Dr. Atwood subsequently removed to this State, and is now living on section 8, Independence Township, Washington County, where he owns forty acres of land.

On May 28, 1833, Dr. Atwood was united in marriage with his cousin Mary, daughter of Ezra Atwood. She died Sept. 25, 1881. A few years later the Doctor took to himself a second wife in the person of Mrs. Lydia Knepper. The ceremony which united them took place Nov. 25, 1884. By his first marriage Dr. Atwood became the father of eight children. five of whom are now living. but all have left the parental fireside.

Atwood is a member of the Methodist Episcopal Church as is also his wife. While a resident of New Sharon, Iowa, he was for twelve years a member of the official board of the church, and active in the duties connected therewith. Now at the age of seventy-nine years he is retired from the active practice in which he has been engaged for threescore years. He is a devout Christian and has been more anxious to do good in his day and generation than to accumulate a large amount of this world’s goods. – Portrait and Biographical Album of Washington, Clay and Riley Counties, Kansas: 1890

1827: Moses G. Atwood came from Concord,NH to practice medicine in North Lyndeborough in 1827. In 1841 he changed from allopathy to homeopathy, and such was the confidence of his patrons in his skill and judgment that, almost without exception, they continued their patronage. He was the first homeopathic physician in New Hampshire. He died in New Boston, April 28, 1850.

1842: In Georgetown, Moses Atwood commenced the manufacture of Atwood’s Bitters with Lewis H. Bateman in 1842.

1852: Moses Atwood sold the original recipe for his bitters to Moses Carter and Benjamin Dodge of Georgetown in 1852, and moved to Iowa. Moses Carter and his son, Luther F. Carter, continued manufacturing several varieties of bitters and also produced native wines and various flavored extracts. The items were peddled from door to door by a salesman who rode around the area with a horse and buggy.

1855: In June 1855, Moses Atwood came West to attend to some business affairs not connected with his proprietary medicines and settled in Iowa

1860: Moses F. Atwood, the 21-year old son of Moses D. Atwood, moves back to Georgetown from Iowa. He begins working with the Bateman family to manufacture Atwood’s Bitters. He lists his occupation in the 1860 Census as “M.D.”

1861: Moses F. Atwood sells the recipe for preparing and compounding Atwoods Bitters in the State of Maine to Nathan Wood.

1875: Luther Carter sold the patented recipe for Atwood’s Bitters to a New York firm who marketed in nationally.

1875: The New York firm of Manhattan Medicine Company formally purchases the rights to Atwoods Bitters from the heirs of L. H. Bateman and Luther Carter.

Ferdinand Meyer V is a native of Baltimore, Maryland and has a BFA in Fine Art and Graphic Design from the Kansas City Art Institute and School of Design. Ferdinand is the founding Principal of FMG Design, a nationally recognized design consultation firm. Ferdinand is a passionate collector of American historical glass specializing in bitters bottles, color runs and related classic figural bottles. He is married to Elizabeth Jane Meyer and lives in Houston, Texas with their daughter and three wonderful grandchildren. The Meyers are also very involved in Quarter Horses, antiques and early United States postage stamps. Ferdinand is the past 6-year President of the Federation of Historical Bottle Collectors and is one of the founding members of the FOHBC Virtual Museum.
View all posts by Ferdinand Meyer V →
This entry was posted in Advertising, Bitters, Druggist & Drugstore, History, Medicines & Cures and tagged bitters, Doctor, Druggist & Drugstore, Georgetown, Jannaice, jaundice, Kansas, Lewis H. Bateman, Luther Carter, Manhattan, Massachusetts, Medicine, Moses Atwood, Moses Carter, Nathan Wood, New Hampshire, physician. Bookmark the permalink.