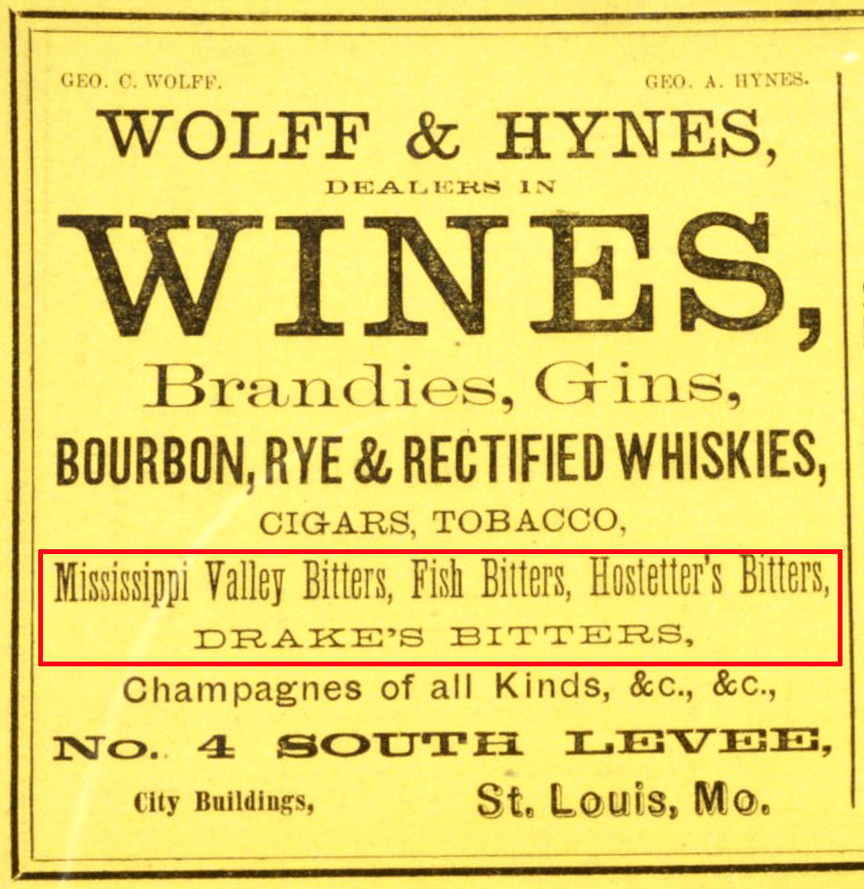 Could it be related to the Yazoo Valley Bitters that was made in Vicksburg, Mississippi by Fulton M. McRae? 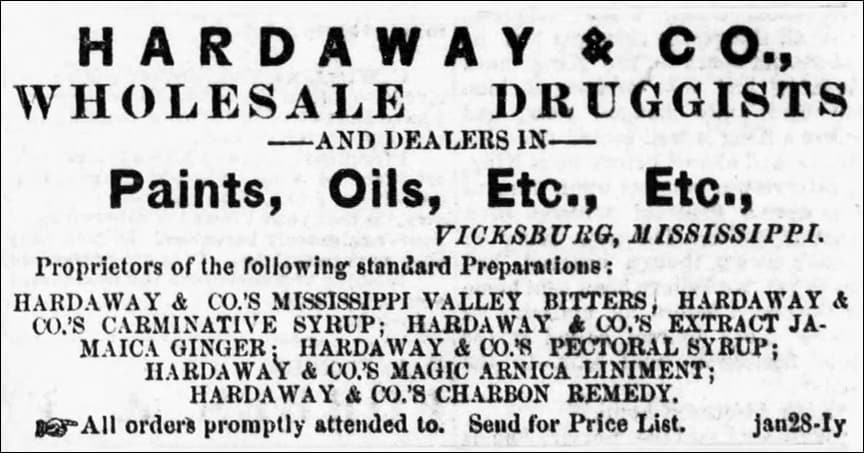 A quick search tells us that this is not a St. Louis brand but a Vicksburg, Mississippi bottle after all. Ah-ha. There must be a connection though this ad refers the bitters as Hardaway’s Mississippi Valley Bitters and not Fulton M. McRae’s Yazoo Valley Bitters. 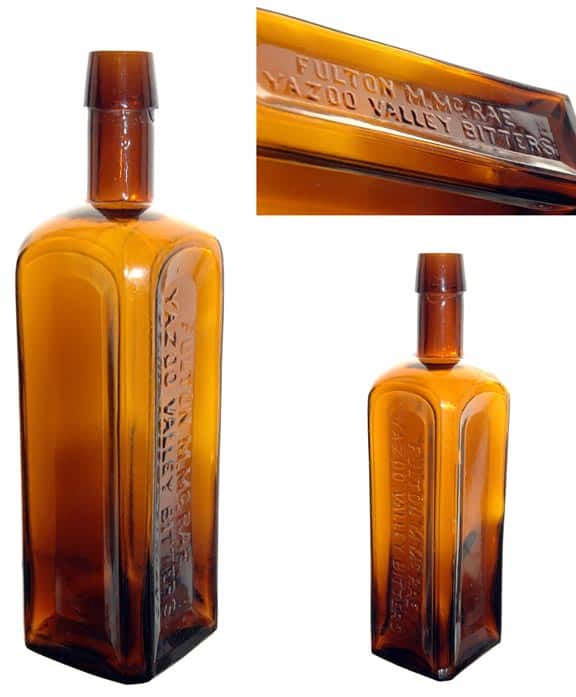 Yazoo City was named after the Yazoo River, which, in turn was named by the French explorer Robert La Salle in 1682 as “Rivière des Yazous” in reference to the Yazoo tribe living near the river’s mouth. The community now known as Yazoo City was founded in 1824 with the name Hannan’s Bluff. It was later renamed Manchester, then changed to Yazoo City in 1841. Yazoo City became the county seat in 1849. 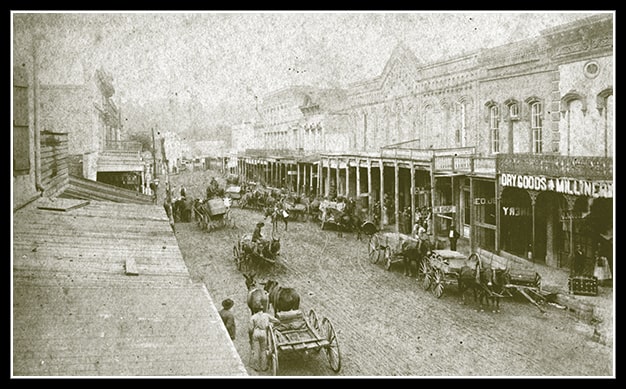 A little history from Wikipedia says that a yellow fever epidemic struck Yazoo City in 1853. During the American Civil War, a makeshift shipyard was established on the Yazoo River at Yazoo City after the Confederate loss of New Orleans. The shipyard was destroyed by Union forces in 1863, but the Confederates soon recovered Yazoo City. Union forces returned the following year and this time burned down almost the entire town. 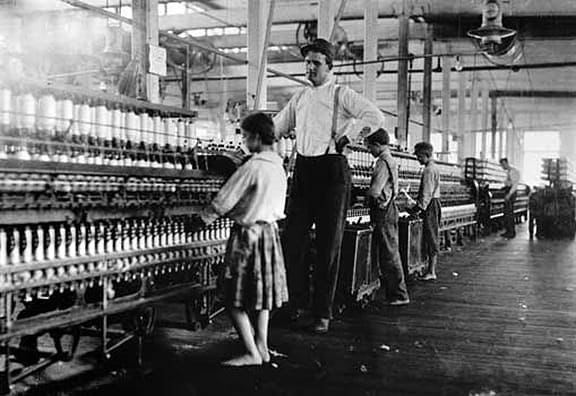 Yazoo City was rebuilt, but yellow fever struck again and took more victims in 1878. On May 25, 1904, a fire destroyed much of central Yazoo City. According to a local legend, the fire was caused by a witch avenging her death. In reality, a boy playing with matches accidentally set a house ablaze. The fire quickly spread, and three-fourths of the town was destroyed, including most of the homes. It was stopped by a canal, which saved the new courthouse (built in 1872 to replace the one burned by the Union forces) and 10 antebellum homes nearby. The town took almost two years to recover. 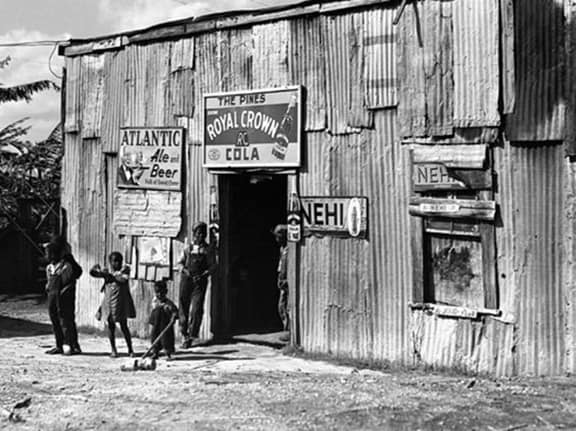 Benjamin J. Hardaway was born on 29 December 1824 in Virginia. He moved to Vicksburg, Mississippi and ran a successful drug business in Vicksburg from about 1846 to 1880 or so. Most of his local ads read Hardaway & White. In the late 1840s he was partnered as Hardaway & Johnston, Druggists. He switched to White as a partner in late 1848. 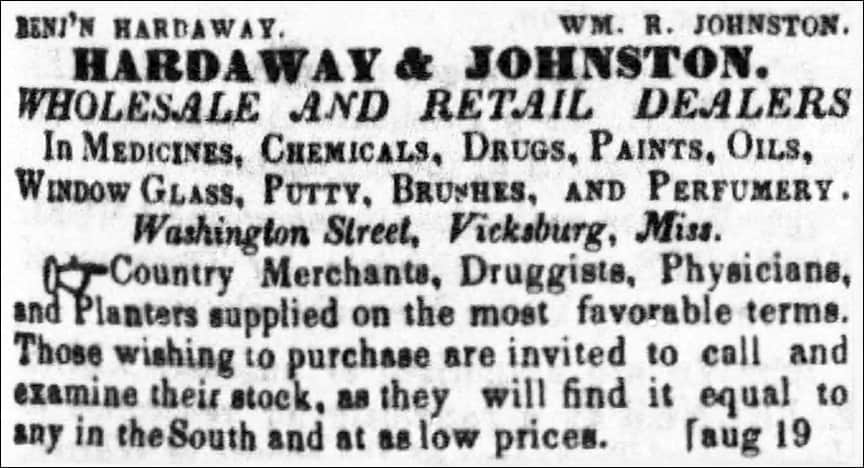 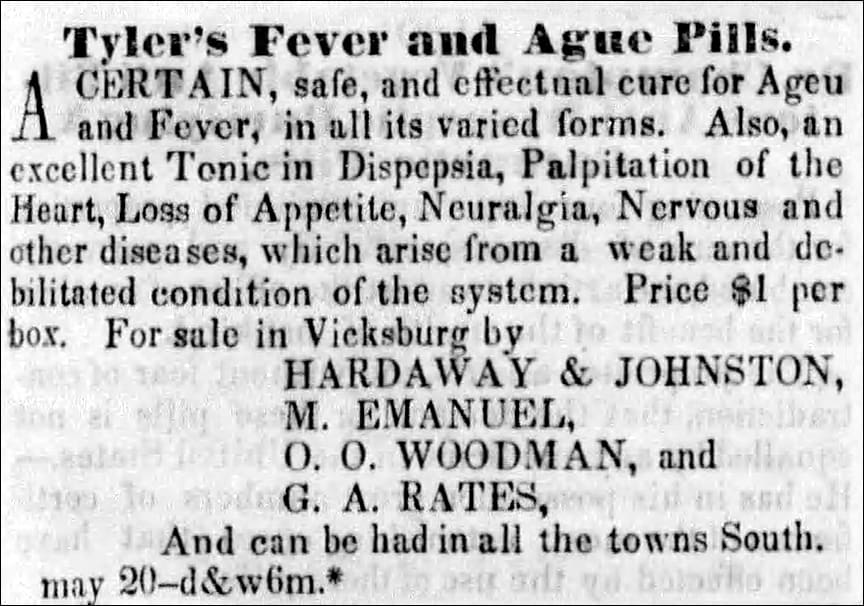 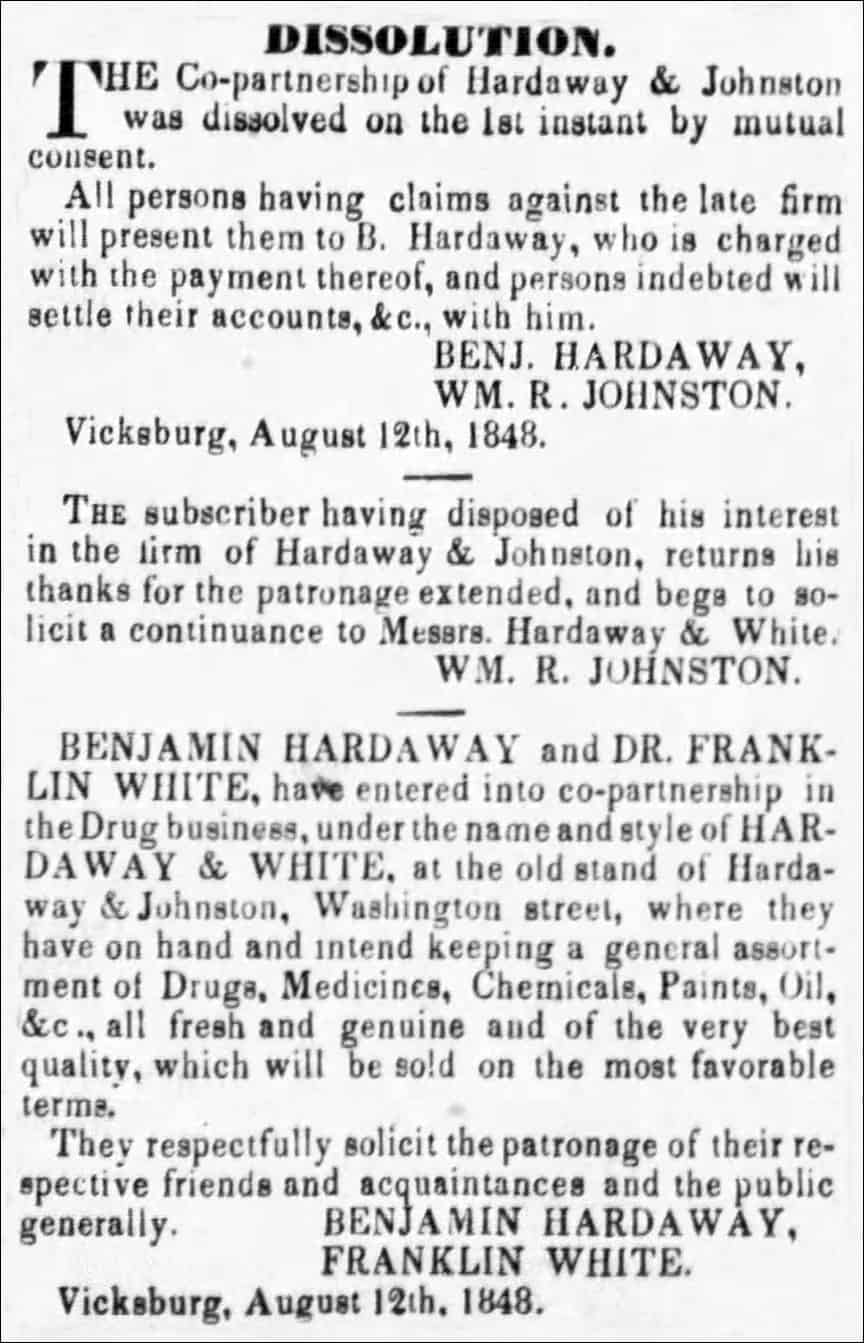 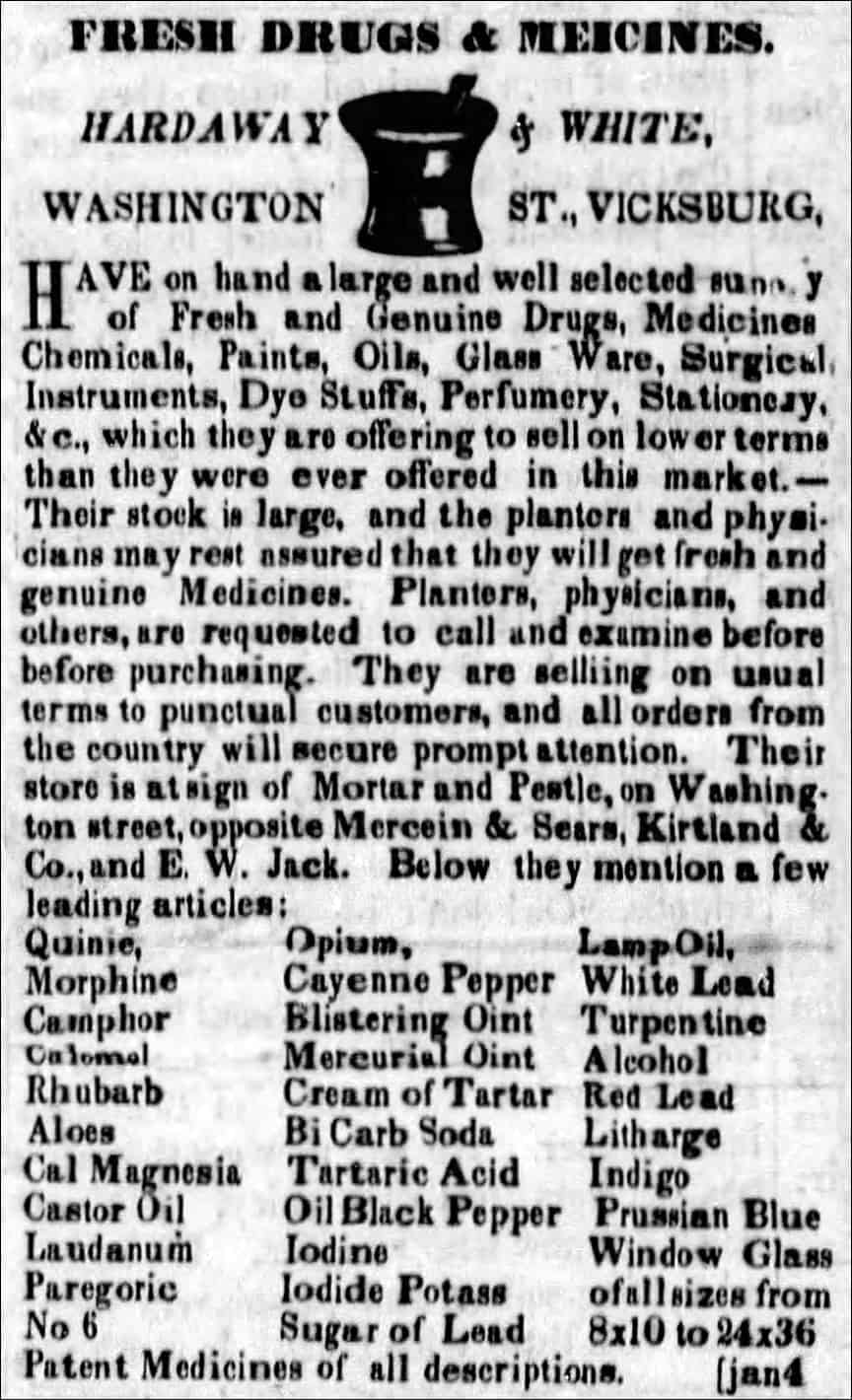 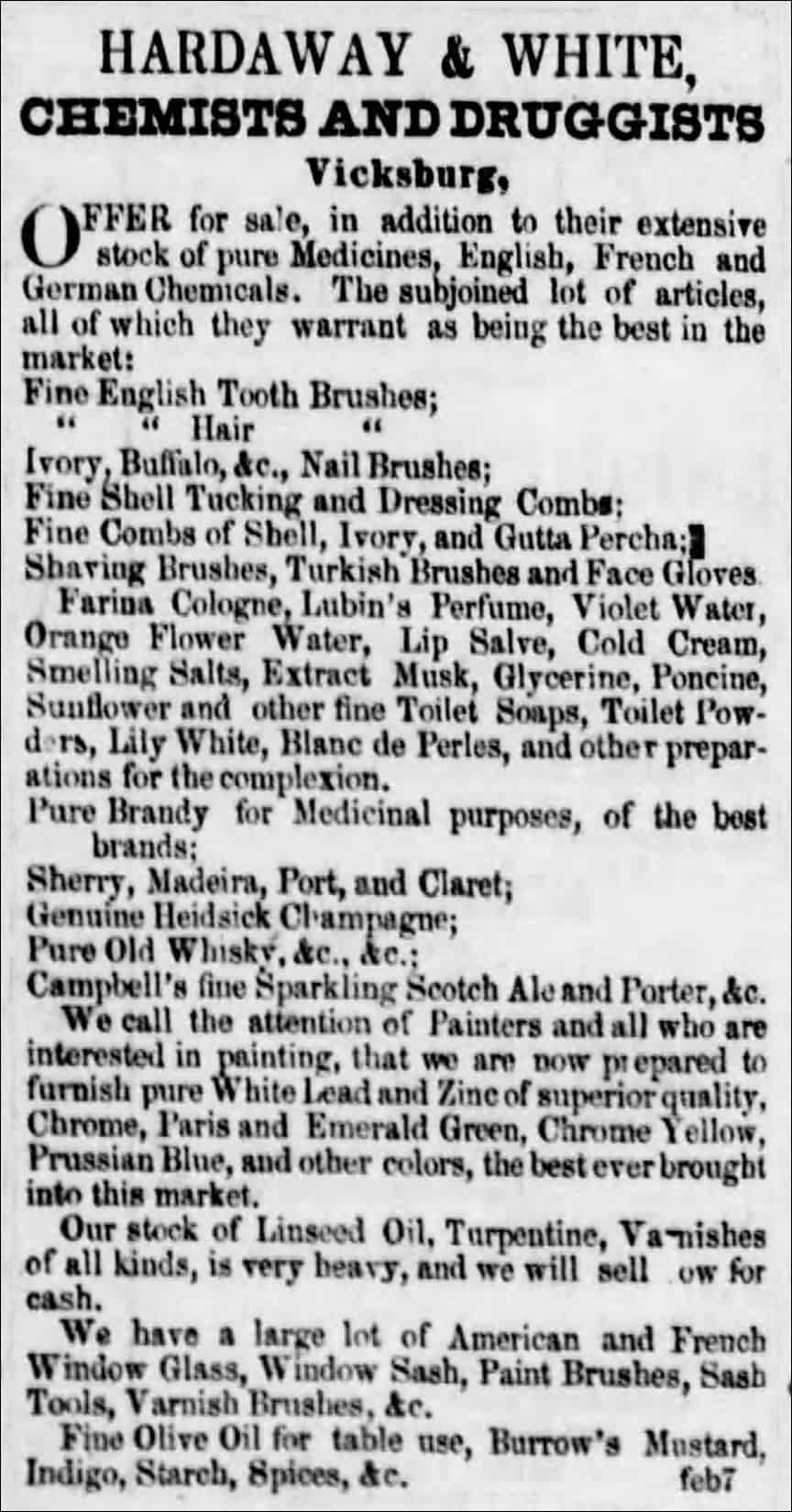 Fulton McRae was born in Vicksburg, Mississippi on January 6, 1850. His father and mother were from Virginia ad relocated their family south. Soon after the Civil War, he began his career as a clerk with the Hardaway Drug Company. Benjamin Hardaway put out the Mississippi Valley Bitters. In 1877 or so, McCrae left Hardaway’s and went into partnership with John Miles and occupied a drug store on Washington Street.

In 1878, the McCrae’s lived in Vicksburg when the yellow fever epidemic struck. On April 26, 1882, Fulton he married Nita Limerick in Rodney, Mississippi. This couple had one son, Fulton Limerick McRae. In 1882, McCrae bought out his parter Miles interests and then ran a successful drug store until 1893. During this period, he put out the Yazoo Valley Bitters which he most likely purchased the brand from Hardaway or simply competed, as so many did in those days without worry of copywrite infringement. After this, McCrae headed to New York City to work at a prominent drug house of A. H. Jones. He would later return to Vicksburg where he died in on 16 August 1906. 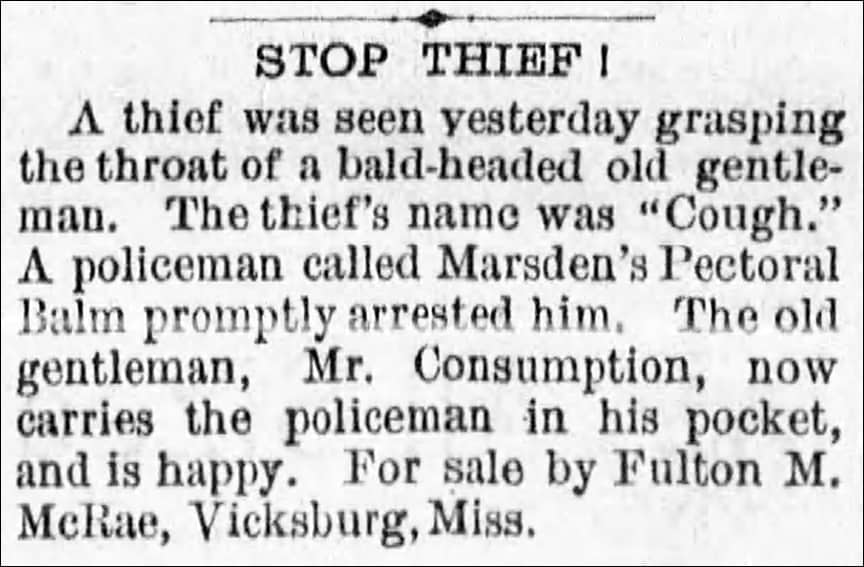 Ferdinand Meyer V is a native of Baltimore, Maryland and has a BFA in Fine Art and Graphic Design from the Kansas City Art Institute and School of Design. Ferdinand is the founding Principal of FMG Design, a nationally recognized design consultation firm. Ferdinand is a passionate collector of American historical glass specializing in bitters bottles, color runs and related classic figural bottles. He is married to Elizabeth Jane Meyer and lives in Houston, Texas with their daughter and three wonderful grandchildren. The Meyers are also very involved in Quarter Horses, antiques and early United States postage stamps. Ferdinand is the past 6-year President of the Federation of Historical Bottle Collectors and is one of the founding members of the FOHBC Virtual Museum.
View all posts by Ferdinand Meyer V →
This entry was posted in Advertising, Bitters, Druggist & Drugstore, History, Medicines & Cures and tagged Benjamin, bitters, Bottle, drug, Drug Store, Druggist & Drugstore, Fulton, Hardaway, Johnston, McCrae, Mississippi, Valley, Vicksburg, White, Yazoo. Bookmark the permalink.