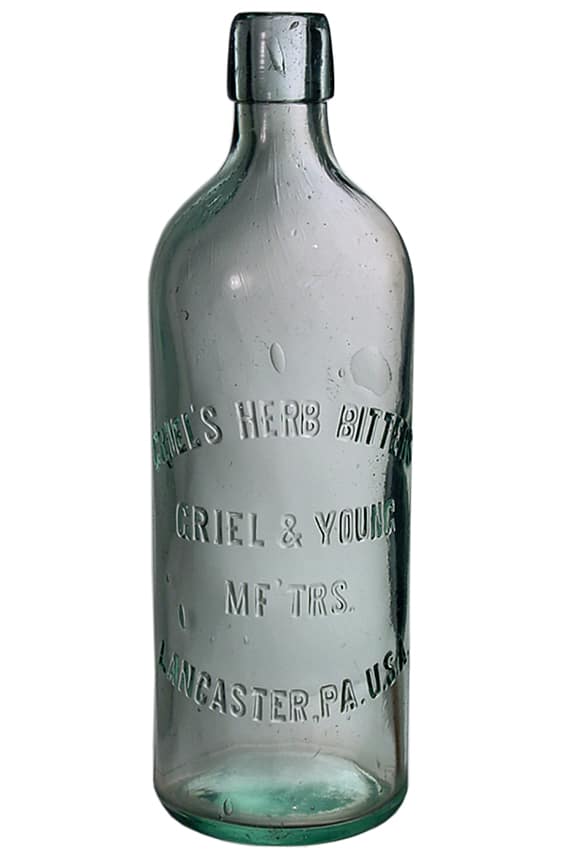 The aqua Griel’s Herb Bitters is another brand of bitters from Lancaster, Pennsylvania that was represented in the recent Nolt Collection of Whiskey Memorabilia that was auctioned off by Conestoga Auction Company. Bitters were well represented in the auction as I picked up four rare examples that had eluded me previously. I also wrote about the auction in other areas:

The Carlyn Ring and W.C. Ham listing for the Griel’s in Bitters Bottles is as follows:

There are four examples of the bottle in this post and they are all the same mold. The top image is from Ed Gray and GreatAntiqueBottles.com. The three examples below are from other sources including an example in my collection, an example that was auctioned off by Glass Works Auctions last week and the Nolt Collection example. These examples all have tooled lips. I have not seen an applied mouth example. Each example also represents a different way to photograph the bottle which is fairly plain. 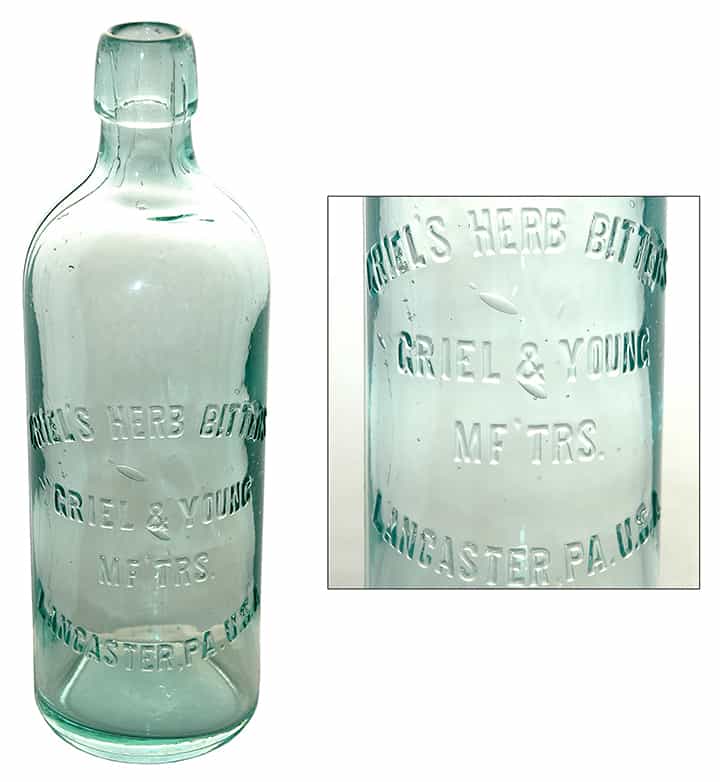 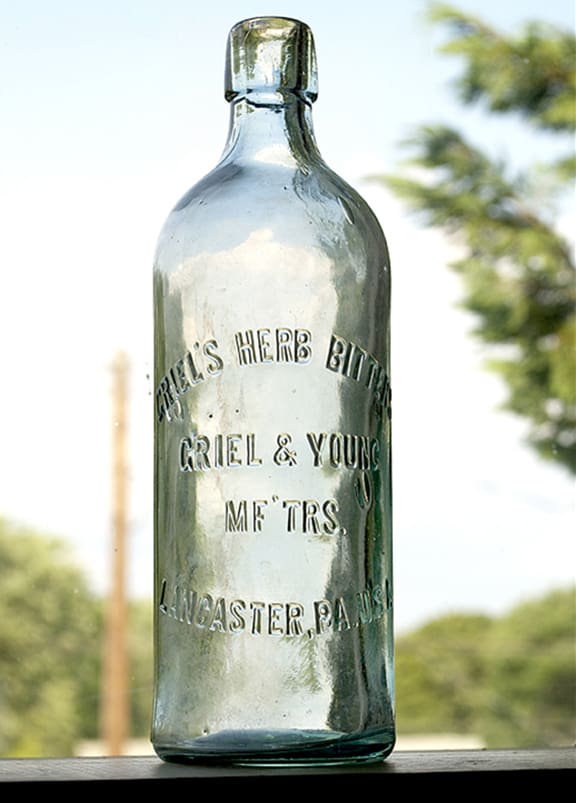 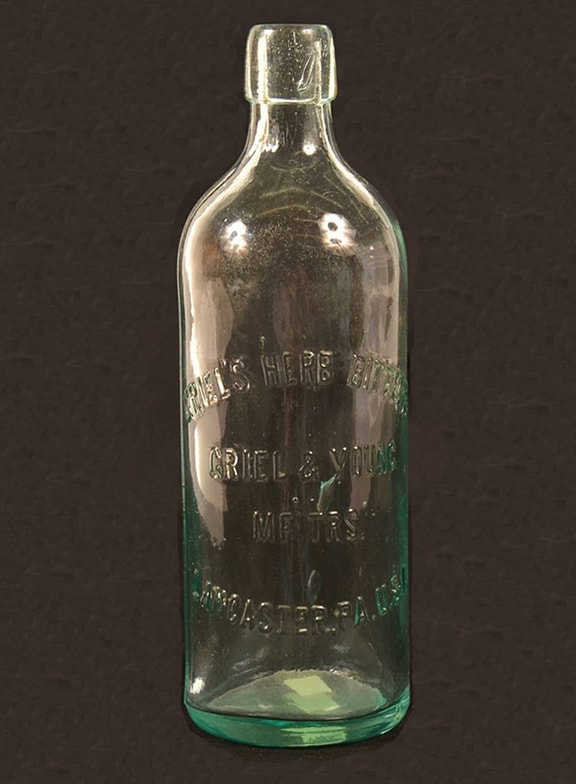 I can not find any advertising or information on this brand which seems odd. The Griel name is well-known in Lancaster. We can probably tag the origins to Jacob Frederick Griel (son of John Frederick Griel and Elizabeth Goll) or most likely, one of his two sons, Jacob Jr. or John.

Jacob Sr. came from Germany and landed in Philadelphia with one dollar in his pocket and sixty dollars in debt. He was best known as a real estate entrepreneur. In any event, it was a short business relationship when Griel & Young manufactured the Griel’s Herb Bitters. If I had to place a bet, I would suspect that his son Jacob Jr. put out the bitters. He was probably assisted by his brother John as they both were sole agents for Mishler’s Keystone Bitters in Philadelphia in 1869. The Griel family would later become brick manufacturers and have a brickyard at the corner of West Lemon and Pine. I’m pretty sure to support the residential home construction business.

Death of the Venerable Jacob Griel – A Busy and successful Career.

Mr. Jacob Griel, one of Lancaster’s oldest and best known citizens, died at his late residence, No. 302 North Duke street, at two o’clock Tuesday morning, after a lingering illness from prostration incident to old age.

Mr. Griel had a remarkable career. Born in Germany, he came to this city when a lad of 15 years, and literally hewed his way up to position and fortune. For an ordinary lifetime he kept a shoe store on North Queen street, where the foundation of his large fortune was laid. Later on he engaged in the dry goods business, but for many years past his time and his means were devoted to real estate transactions. Among his possessions was a good-sized farm in the western part of the city, and here, in the past few years, assisted by his sons John and Jacob, he built hundreds of convenient modern dwellings, many of which have been sold on easy terms to mechanics and others of moderate means who were thus enabled to secure home for themselves. He was a member of the Lutheran church, and was honorable and upright in his walks. Twice married, both wives preceded him to the grave, but two sons and one daughter remained to comfort his declining days. The only surviving daughter is Mrs. Sultzbach, of Marietta. Another daughter, Margie, was the wife of H. H. Betz, photographer, and died some four years ago. The sons are Messers. John and Jacob Griel, both well known in the community as thorough business men. 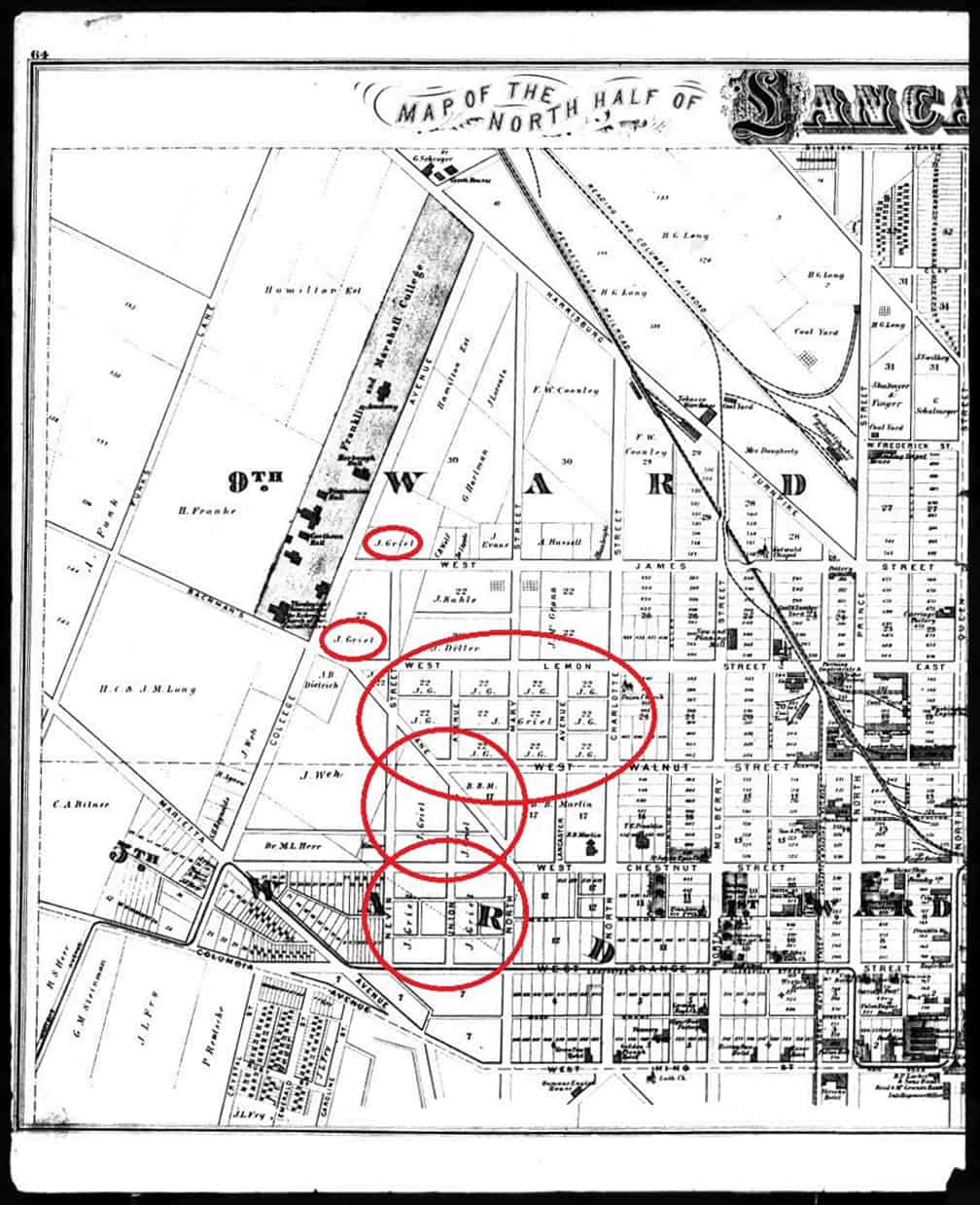 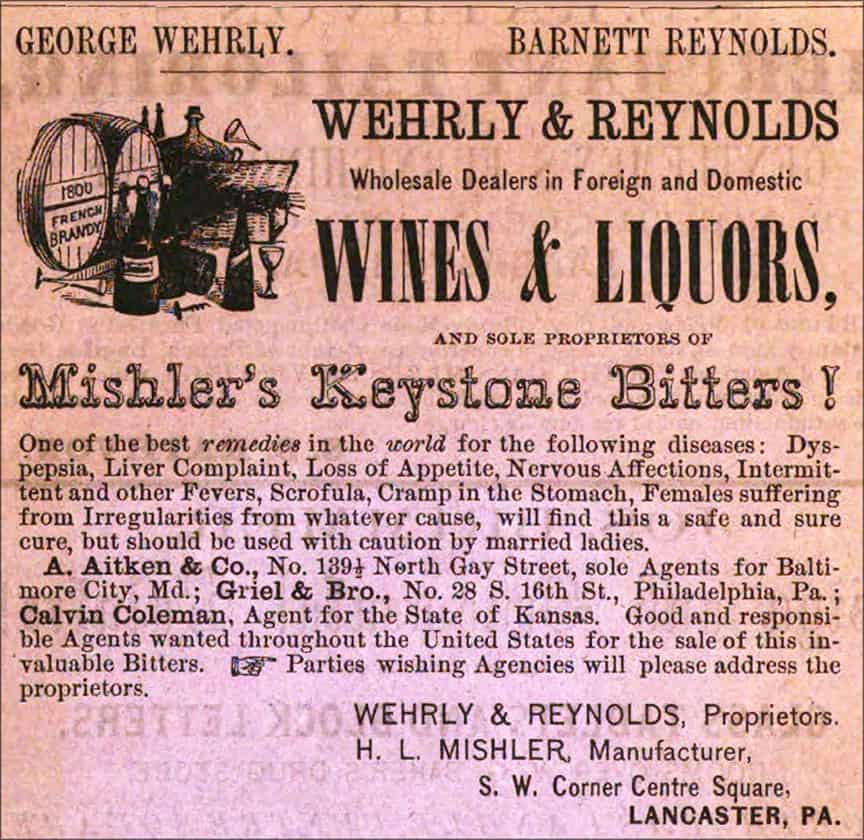 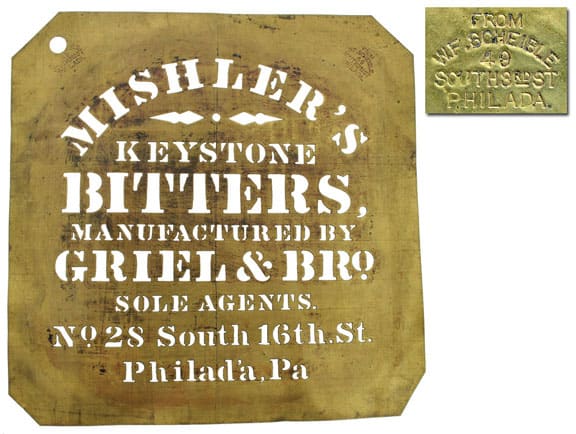 Children of Jacob Frederick Griel and Margaret Fravel are:

1819: Jacob Griel Emigration 13 September 1819. Landed in Philadelphia with one dollar in his pocket and sixty dollars in debt.

1843: Jacob Griel closed his shoe shop on North Queen Street near the square.

Ferdinand Meyer V is a native of Baltimore, Maryland and has a BFA in Fine Art and Graphic Design from the Kansas City Art Institute and School of Design. Ferdinand is the founding Principal of FMG Design, a nationally recognized design consultation firm. Ferdinand is a passionate collector of American historical glass specializing in bitters bottles, color runs and related classic figural bottles. He is married to Elizabeth Jane Meyer and lives in Houston, Texas with their daughter and three wonderful grandchildren. The Meyers are also very involved in Quarter Horses, antiques and early United States postage stamps. Ferdinand is the past 6-year President of the Federation of Historical Bottle Collectors and is one of the founding members of the FOHBC Virtual Museum.
View all posts by Ferdinand Meyer V →
This entry was posted in Bitters, History, Medicines & Cures and tagged aqua, auction, bitters, Conestoga, Frederick, Germany, Gray, Griel, Griel & Young, Griel's, Herb, Jacob, John, lancaster, Meyer, Nolt, Pennsylvania, Philadelphia, young. Bookmark the permalink.