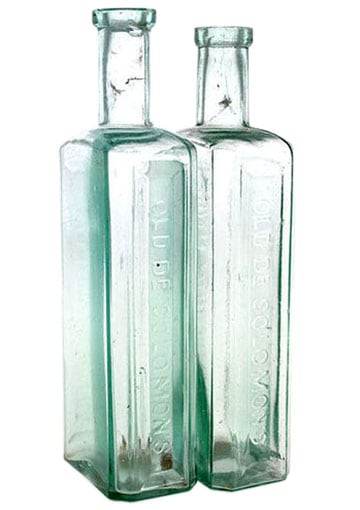 The bottle picture below represents an aqua OLD DR. SOLOMON’S GREAT INDIAN BITTERS from Attleboro, Massachusetts that I picked up in the recent Glass Works Auctions “Colors of Fall” Potpourri Auction. It is 8 3/4” tall, has a smooth base, an applied mouth and it is perfect. The top of post bottle picture pairs the Old Dr. Solomon’s Great Indian Bitters with an Old Dr. Solomon’s Indian Wine Bitters. 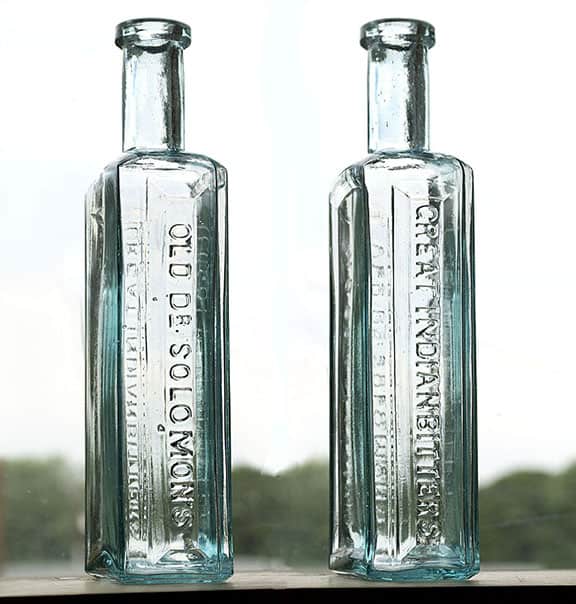 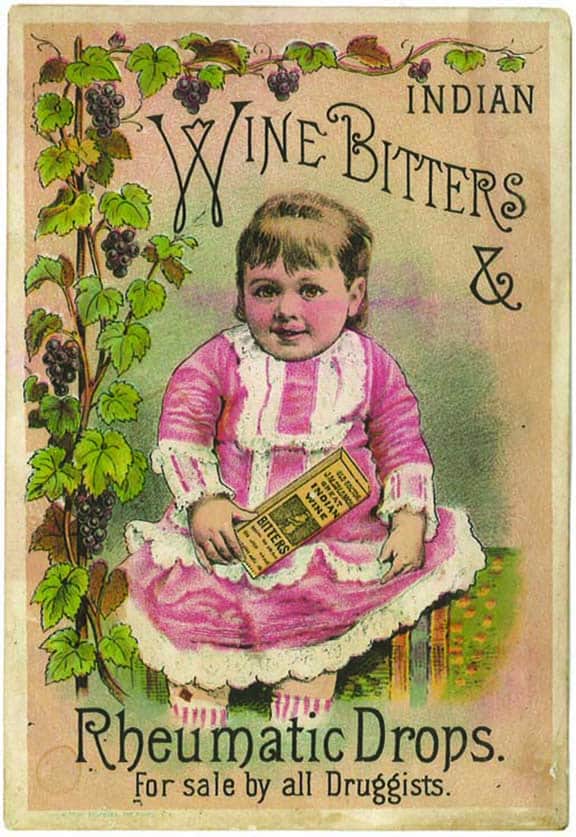 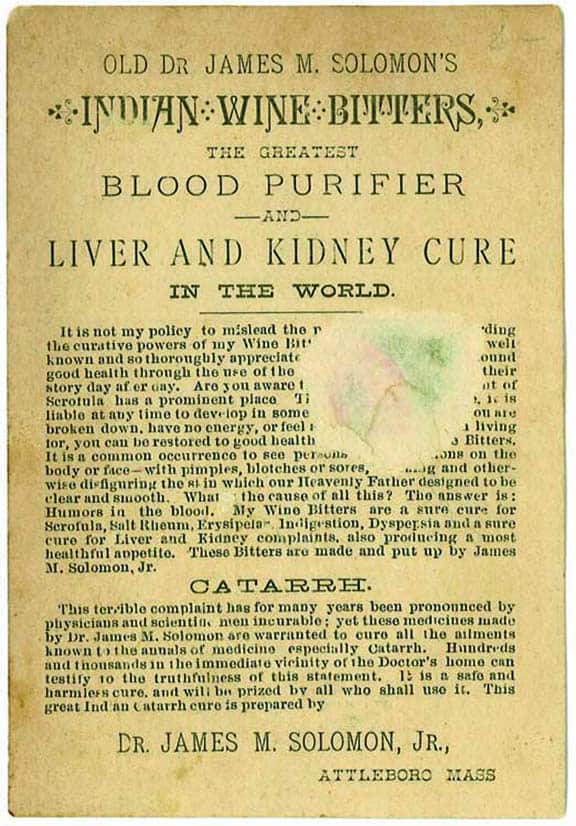 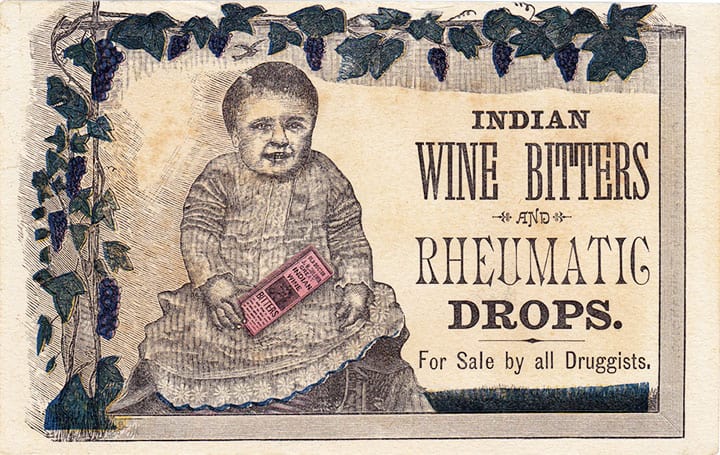 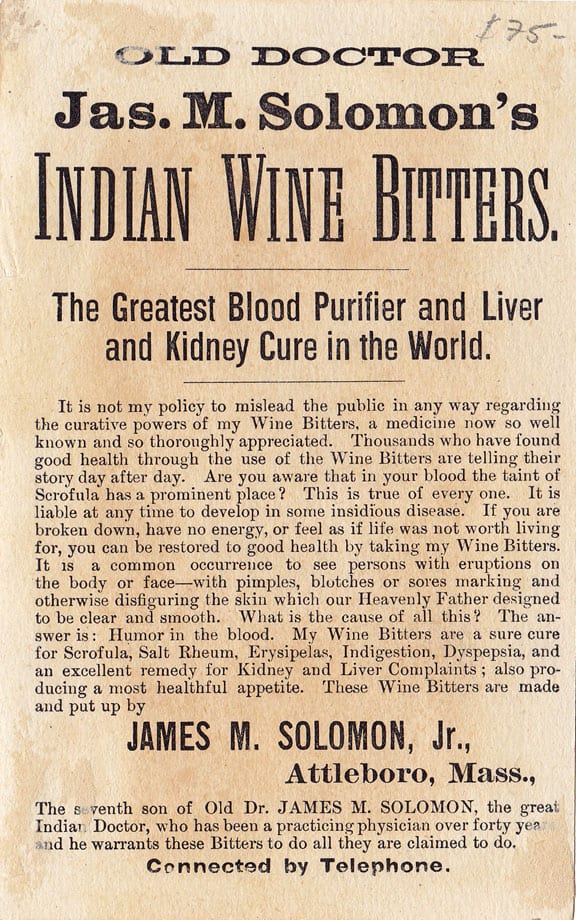 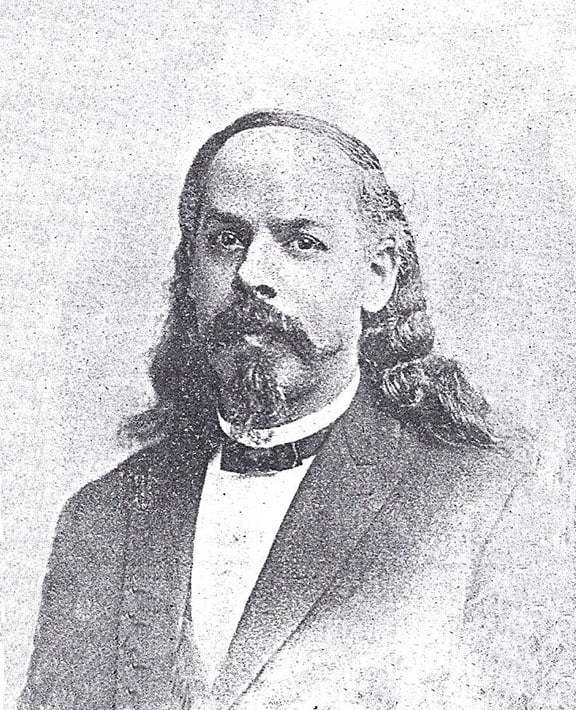 The Solomon Indian Remedy brands originated in Providence, Rhode Island by ‘old’ Dr. James M. Solomon, who was the sole proprietor of a wide variety of Indian medicines that made him famous. Solomon apparently was gathering herbs and roots in the woods on this property and he decided to become a medicine man. Solomon was born in Seekonk, Bristol, Massachusetts in 1812 from parents John Solomon and Amey Hill. He was neither an Indian nor a Doctor though he milked these titles with extreme efficiency in marketing his medicines. Later advertising touted him as “The Great Indian Medicine Doctor” and “The Root and Herb Doctor”. He sold his homemade remedies to the Ashley Drugstore on Park Avenue in Attleboro, Massachusetts for many years. The remedies were sold as “Old Doctor Solomon’s Indian Bitters.”

Dr. James M. Solomon Jr., the seventh son, would carry the brand forward and later travel from hotel to hotel selling the Old Dr. Solomon Indian concoctions. He was based out of Attleboro, Massachusetts and apparently a graduate of the Columbia Medical College in New York. He was noted as a physician of skill and experience, standing high in his profession. 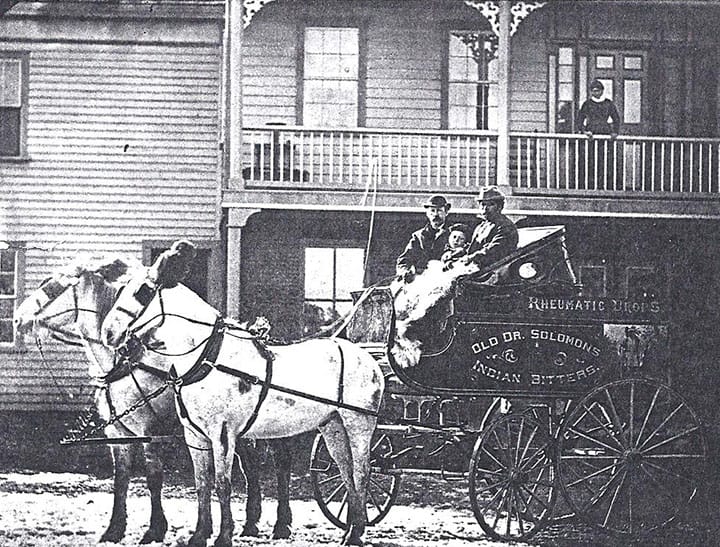 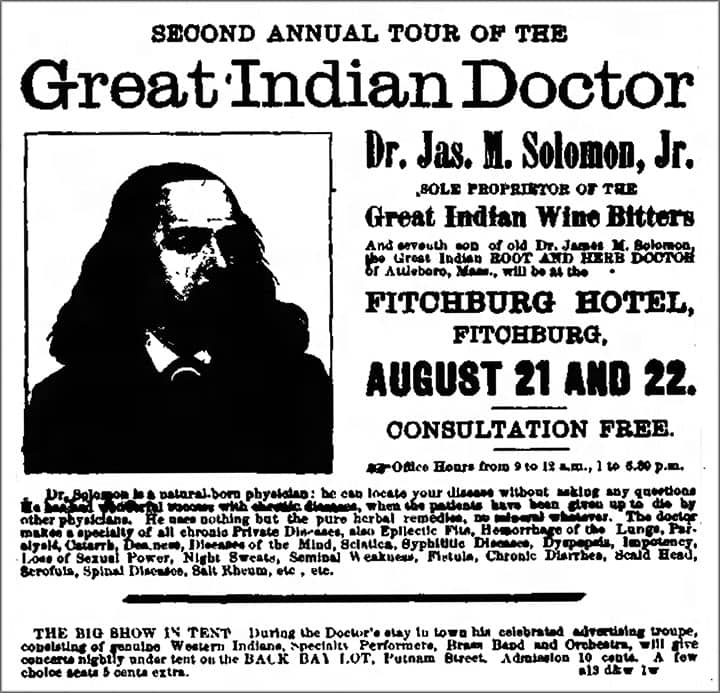 Dr. James M. Solomon Jr. dreamed of a great hospital and sanatorium which he would one day build in Attleboro. Here people would come from all corners of the world to be healed and cured of that dread disease, cancer. The project finally opened but would run out of operational funds a few years later. He would then pack up his show and reappear in Boston touting his cures for cancer. 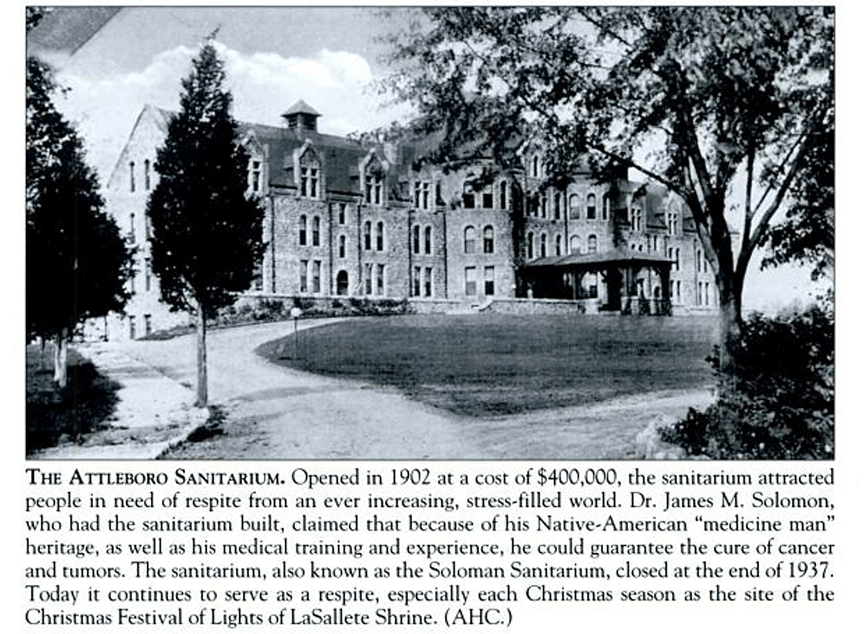 THE SOLOMON DRUG COMPANY, Office and Laboratory, No. 35 Hartford Street.

This company was organized September 29, 1892. It is incorporated under the laws of the State of Maine, and has a capital of $75,000. Dr. James M. Solomon is president of the company and F. H. Hodges is secretary, treasurer and manager. The premises occupied as laboratory are commodious and well-equipped for the purpose, all conveniences being provided. The facilities are ample and excellent, and a number of people are employed in the several departments. The Solomon Drug Company are proprietors and manufacturers of a highly meritorious class of pharmaceutical specialties, which are in extensive and rapidly growing demand.

Dr. Solomon is a practitioner, with office at No. 75 Court Street, and is a noted specialist in chronic diseases. He is a graduate of the Columbia Medical College, New York, and a physician of skill and experience, standing high in his profession. Dr. Solomon was born in Attleboro, Mass., and lives there, his residence being one of the finest in that town. He is building a private hospital, which will cost $23,000, on the highest and most attractive spot in Attleboro, and has purchased between 300 and 400 acres of ground surrounding the site, which he intends converting into a park, in connection with the institution. Mr. Hodges, who has sole charge of the laboratory, has had fourteen years’ experience with this house and understands every detail of this business, being an excellent chemist and well-known in the community, being a member of the Knights of Pythias and other organizations.

Boston and Bostonians By American Publishing and Engraving Co. (N.Y.), 1894 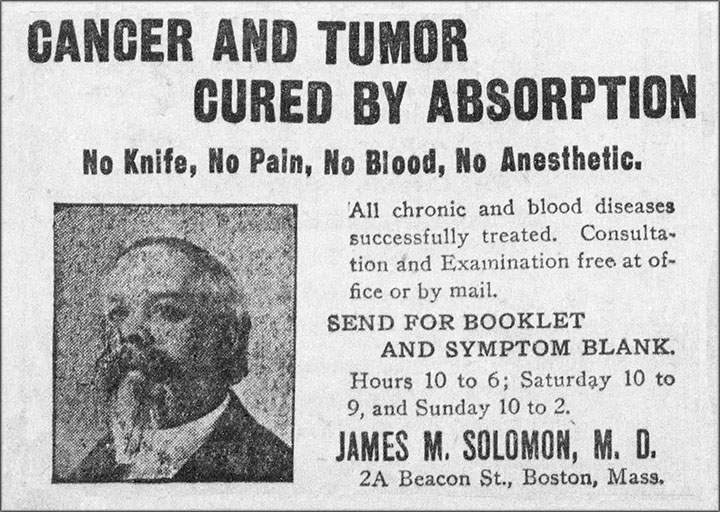 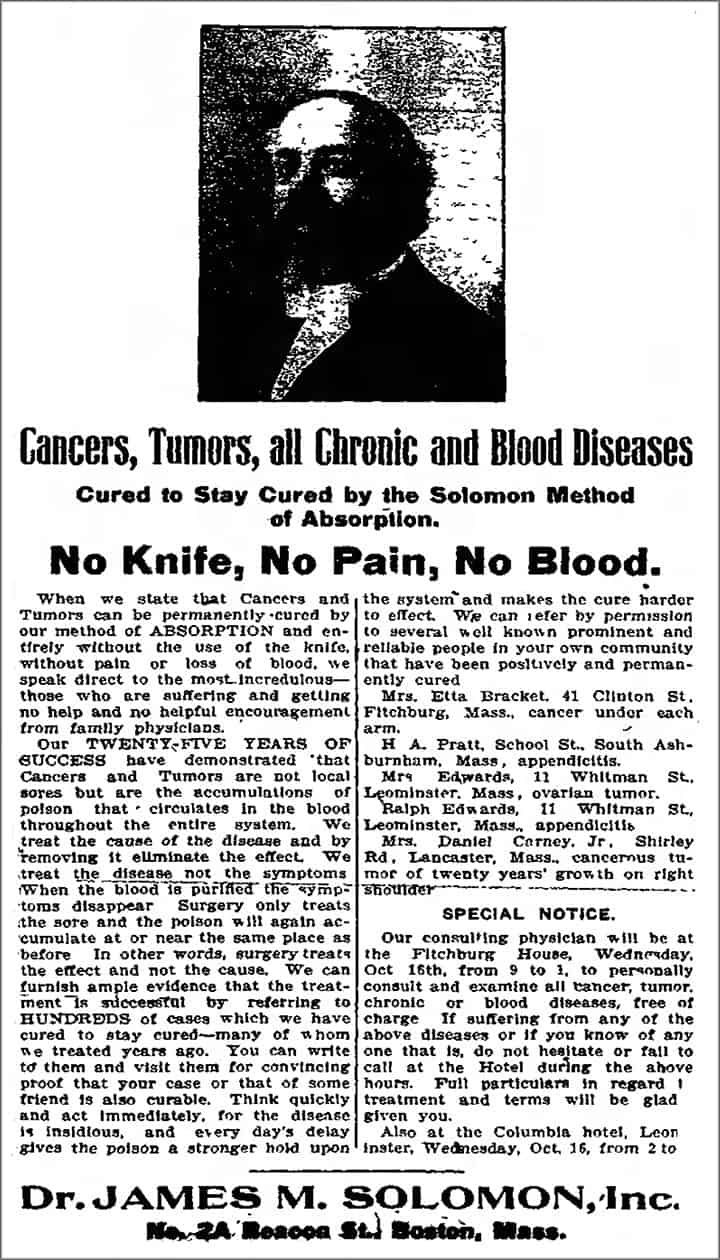 1892: THE SOLOMON DRUG COMPANY, Office and Laboratory, No. 35 Hartford Street. This company was organized September 29, 1892.

1894: O. F. Higgins, a civil engineer, was engaged to survey and layout the hospital or sanatorium grounds; he was also commissioned to trace out the position of a great stone building of Dr. Solomon’s dreams.

1901: O.F. Higgins completes architect’s plans for the Attleboro sanatorium; soon the walls stood in place ready and waiting to receive the giant roof; John M. Fisher, a local businessman, at this point, was smitten by Dr. Solomon’s dream and pledged the necessary financial backing; the sanatorium cost $400,000 to build.

1906: Lack of funds forced the closing of the Solomon Sanatorium.

Ferdinand Meyer V is a native of Baltimore, Maryland and has a BFA in Fine Art and Graphic Design from the Kansas City Art Institute and School of Design. Ferdinand is the founding Principal of FMG Design, a nationally recognized design consultation firm. Ferdinand is a passionate collector of American historical glass specializing in bitters bottles, color runs and related classic figural bottles. He is married to Elizabeth Jane Meyer and lives in Houston, Texas with their daughter and three wonderful grandchildren. The Meyers are also very involved in Quarter Horses, antiques and early United States postage stamps. Ferdinand is the past 6-year President of the Federation of Historical Bottle Collectors and is one of the founding members of the FOHBC Virtual Museum.
View all posts by Ferdinand Meyer V →
This entry was posted in Advertising, Bitters, History, Medicines & Cures, Remedy and tagged Attleboro, bitters, Cancer, Herb, Hospital, Indian, James M. Solomon, Massachusetts, Medicine, Old, Providence, Remedy, Rhode Island, Root, Sanitarium, Wine. Bookmark the permalink.