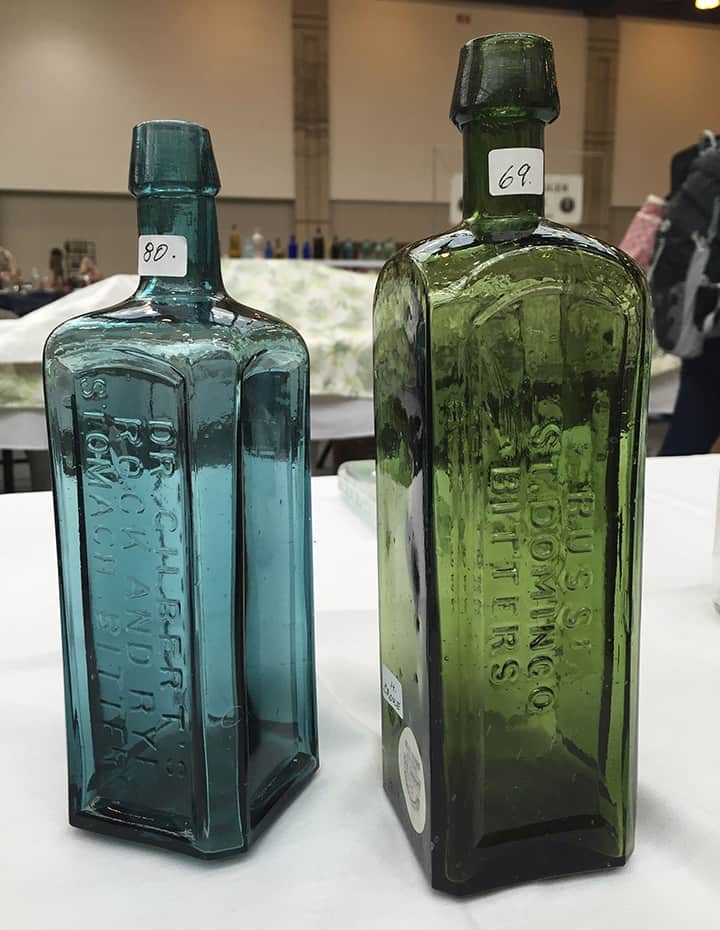 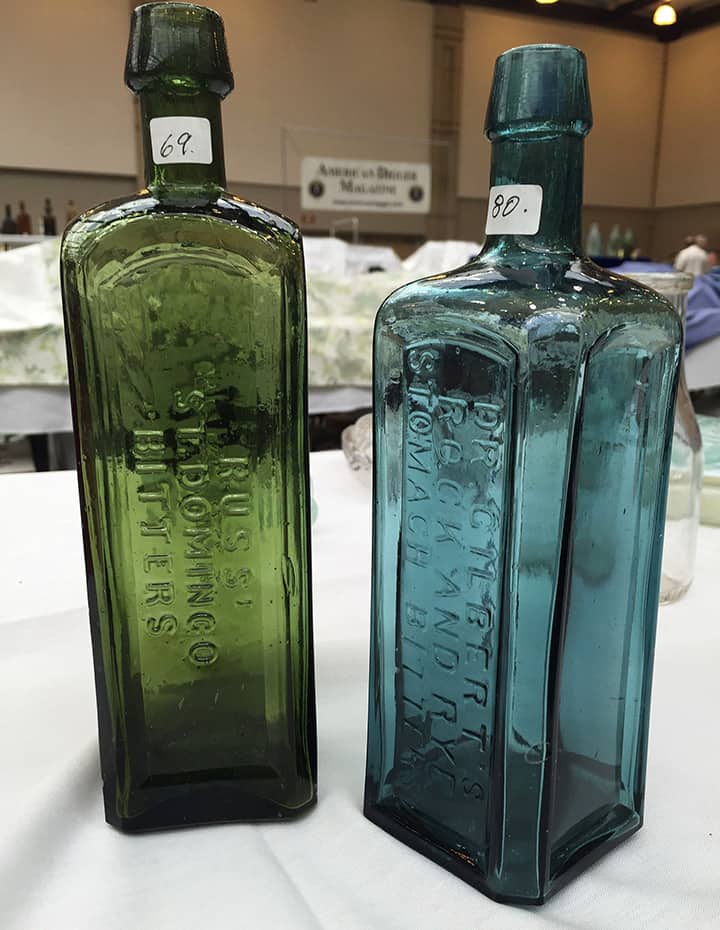 Gary Beatty (FOHBC Treasurer), pulled me aside during the show and took me to his table where he pulled out a box from beneath. I knew it had to be something great as Gary has a keen eye for bitters. He pulls out a killer, probably the best I have ever seen, Russ’ St. Domingo Bitters (Read: Russ’s St. Domingo Bitters – New York) in a spectacular green that was whittled to death. Next he pulls out the taller variant of a Dr. Gilbert’s Rock and Rye Bitters in blue-green. These two bottles commanded a quick picture or two as the Rock and Rye example recently moved from the Howard Crowe collection to the Beatty Collection. 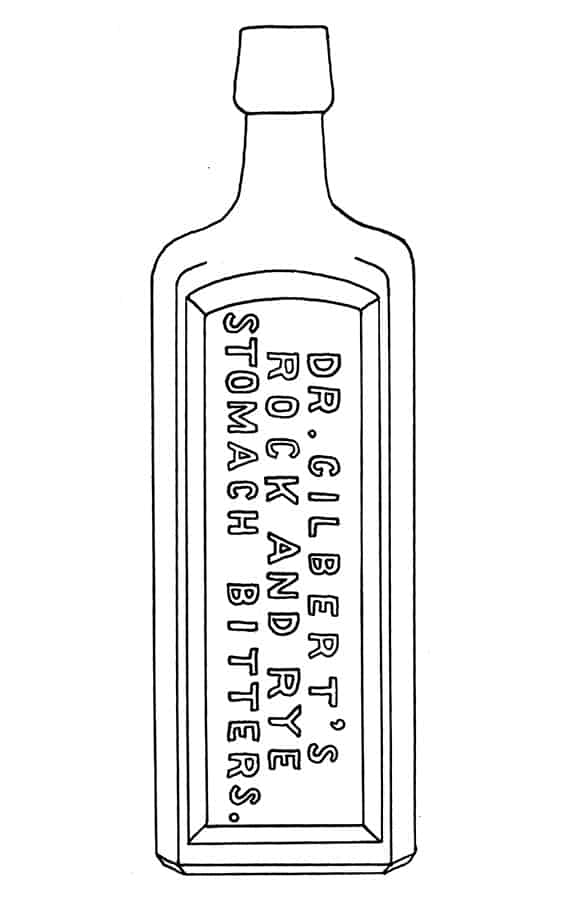 Here is the smaller variant below in a blue-green or teal color. 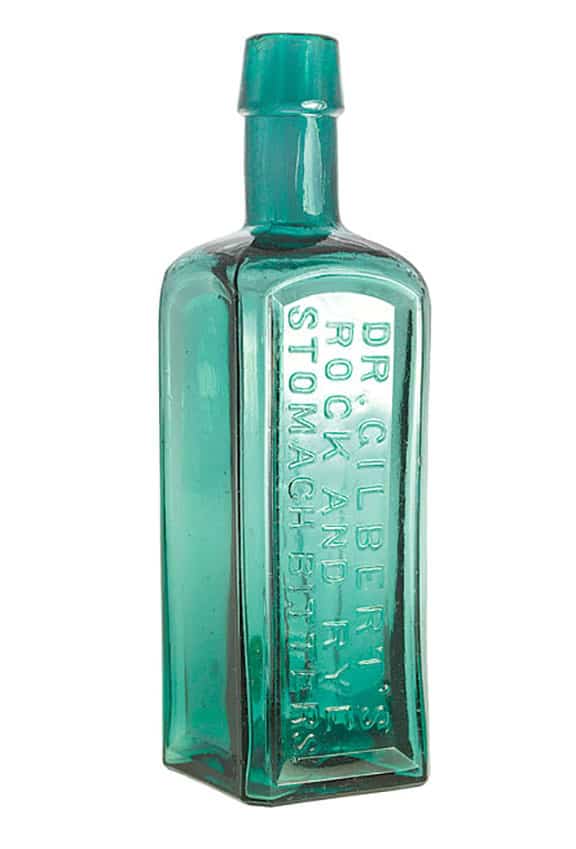 Rock and Rye was a liqueur made of whiskey blended with powdered rock candy and sometimes fruit and was something almost any bar carried and in the 1800s. It was reputed to aid in digestion. I suppose they made the bottles a ‘pretty’ color to mask the sludge with. Most liquor establishments most made their own, often as a way to make some rather rustic whiskey more approachable. The classic recipe is rye sweetened with rock candy, sometimes also ginger and/or citrus peels, essentially an Old Fashioned cocktail-in-a-bottle. Theoretically, all it needs is a couple of dashes of bitters and a twist to complete it. Since rye had a hard time coming back after Prohibition, if a bar carried it at all after that, it was likely a manufactured bottled bastardization of the stuff (for nostalgic purposes?), neither “rye” nor “rock.” Excerpt: The Return of Rock & Rye, An old bar standard makes a comeback to replace what’s been here for years. Amanda Schuster 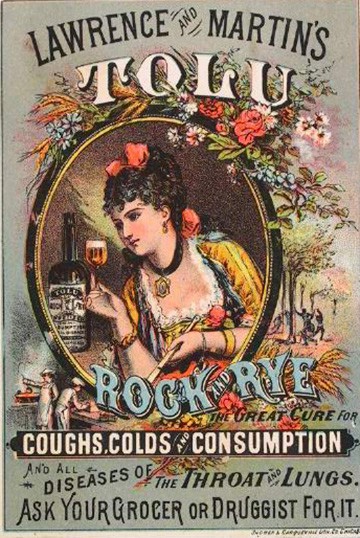 So who is Dr. Gilbert? I really do not know. The path we will look at first is to see if it is related to Gilbert’s Sarsaparilla Bitters (see below) from Enosburgh Falls, Vermont. This will be a follow-up post. 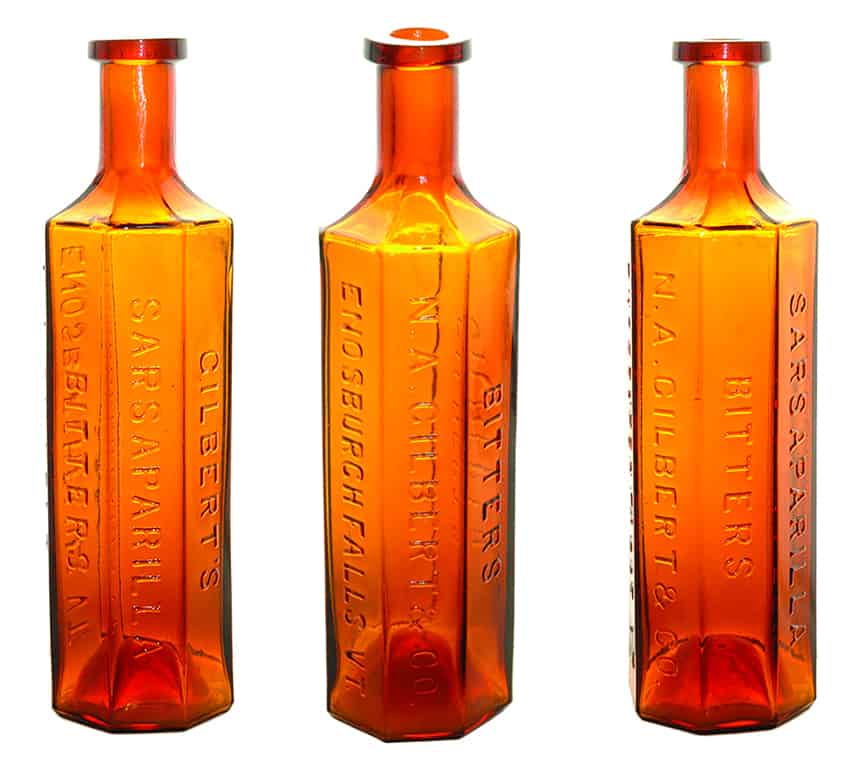 Ferdinand Meyer V is a native of Baltimore, Maryland and has a BFA in Fine Art and Graphic Design from the Kansas City Art Institute and School of Design. Ferdinand is the founding Principal of FMG Design, a nationally recognized design consultation firm. Ferdinand is a passionate collector of American historical glass specializing in bitters bottles, color runs and related classic figural bottles. He is married to Elizabeth Jane Meyer and lives in Houston, Texas with their daughter and three wonderful grandchildren. The Meyers are also very involved in Quarter Horses, antiques and early United States postage stamps. Ferdinand is the past 6-year President of the Federation of Historical Bottle Collectors and is one of the founding members of the FOHBC Virtual Museum.
View all posts by Ferdinand Meyer V →
This entry was posted in Bitters, Bottle Shows, Liqueurs, Medicines & Cures, Questions, Spirits, Whiskey and tagged Beatty, bitters, Chattanooga, Crowe, Gilbert, liqueur, Meyer, rock, Rye, Whiskey. Bookmark the permalink.