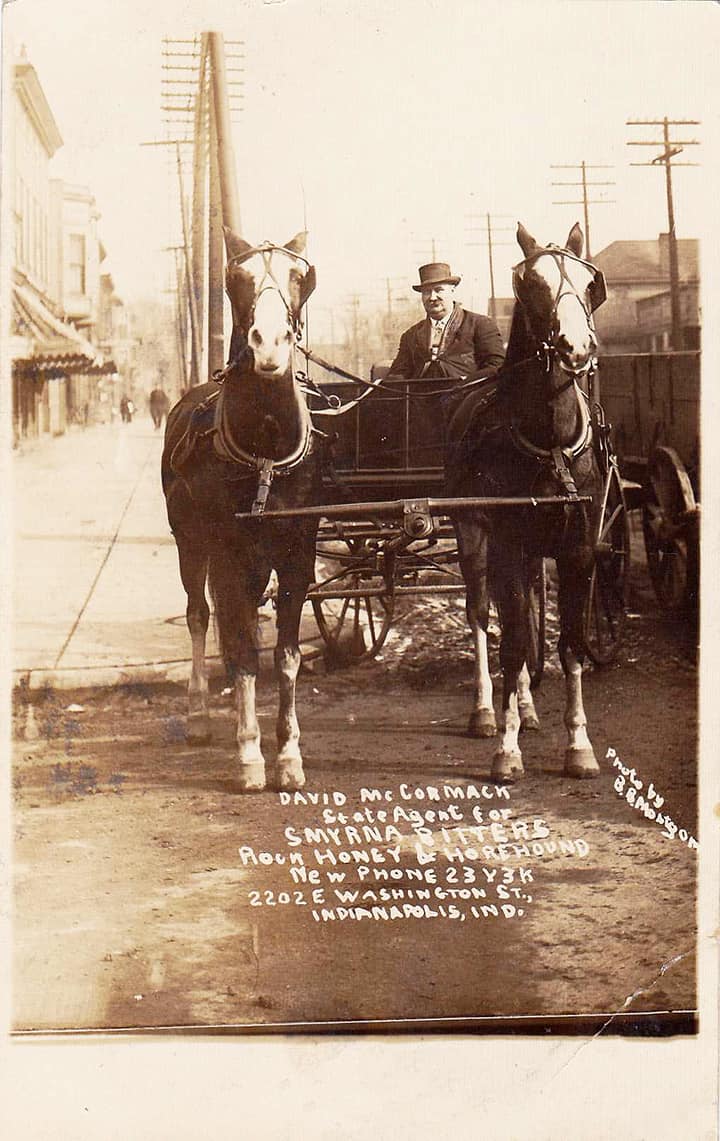 Bitters trade card and ephemera collector Joe Gourd, sent in the above image from his immense collection saying, “Saw your updated wagon post and thought of this “real photo” postcard. Let us not forget that bitters too, were delivered by horse and cart. This is the S 134 Smyrna Bitters. The post card is undated. Hope you are having a good day. Joe”

Read: How we Transported our Goods, Beer and Liquor Back Then

How would you like it if you had a little extra advertising money set aside for marketing your bitters, so you type up an ad, or maybe scribble it out on a piece of paper, then you send it to a handful of regional newspapers only to find out that they print your name wrong! How could they all be wrong as there were no copy machines? This happened to D. T. Boozer, who was the proprietor and president of the Smyrna Bitters Company in Dayton, Ohio. Notice that the advertisement above says B.T. Boozer instead of D.T. Boozer.

According to the article below, the initials, “D. T.” is a common abbreviation for “Snakes”. I didn’t get that one until Marianne Dow contacted me and said, “Here is our spelling mistake #2″, “Another typo – sHakes, not sNakes. D.T. stands for delirium tremens (“got the DT’s”) – alcohol withdrawal symptom.”

“D. T.” had a son named Thomas T. Boozer according to a 1912 directory listing. T.T. Boozer. Betcha’ he was picked on! He helped his father sell the bitters. 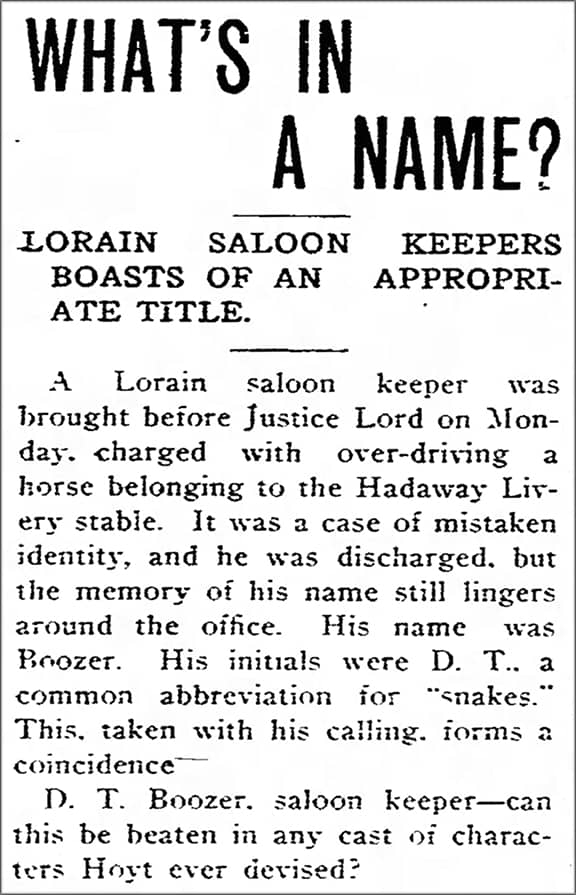 I wondered about the word ‘boozer’ and come to find out that the origin of the word “booze” is often mistakenly credited to E. C. Booz, who was a distiller in the United States in the 19th century. But the first references to the word “booze,” meaning “alcoholic drink,” appear in the English language around the 14th century as “bouse.” The spelling we use today didn’t appear until the 17th century.

The word “booze” itself appears to have Germanic origins, though which specific word it came from is still a little bit of a mystery. The three main words often cited are more or less cousins of each other, and are very similar in meaning and spelling. One of the words came from the Old High German “bausen,” which meant “bulge or billow.” This, in turn, was a cousin of the Dutch word “búsen,” which meant “to drink excessively” or “to get drunk.” The Old Dutch language also has a similar word, “buise,” which translates to “drinking vessel.” It is thought that the English word “bouse,” which later became “booze,” has its origins in one or more of those three words, with most scholars leaning towards it coming from the Dutch word “búsen.” [Today I Find Out]

D. T. Boozer first operated a saloon in Dayton, Ohio in 1902 at the Hotel Cooper according to directory listings. He was apparently from Georgia which is probably the origin of the Smyrna Bitters name. D. T. was a well-known liquor dealer and in 1909 or so, he starts marketing his Smyrna Stomach Bitters. He called his bitters a “Life Tonic” and would give open air concerts to attract crowds so he could sell his bitters. He said that his bitters “Prolongs Life” as this was also embossed on the bottle.

D. T. Boozers’ partners were Roscoe Stauter and J.P. Montgomery and they were addressed at 506 S. Wayne Avenue in Dayton. Apparently they ousted Boozer in 1911 for some shady dealings and running off to get hitched. Boozer must have been hitting his booze and bitters too much. See article above.

It looks like he had agents selling the bitters because Joe’s photograph shows a David McCormack from Indianapolis, Indiana, with a horse and wagon. It says “Smyrna Bitters, Rock Honey and Horehound” on the photograph.

The latest listing for Smyrna Bitters was around 1916. Note that “bitters” is spelled ‘BITTIRS’ on the fluted neck sample below.

It looks like there were two variants of the bottles. 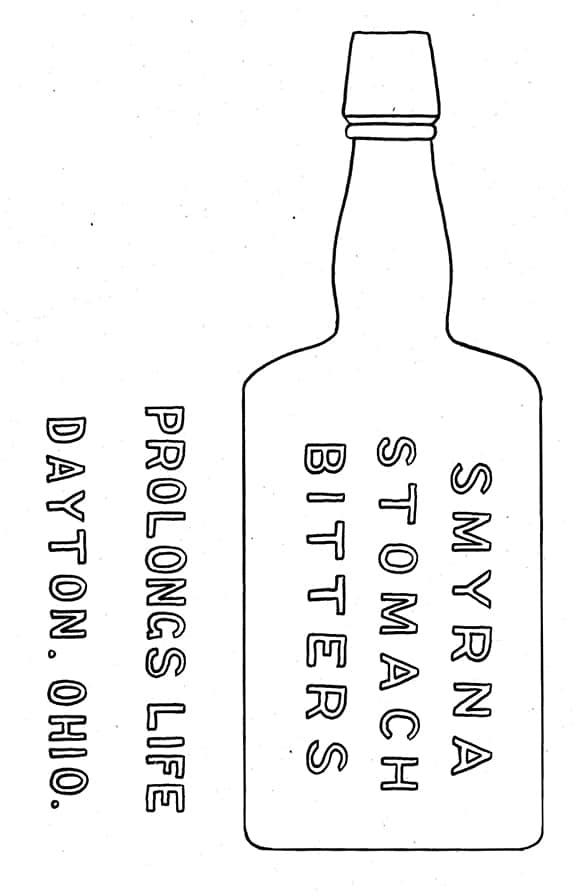 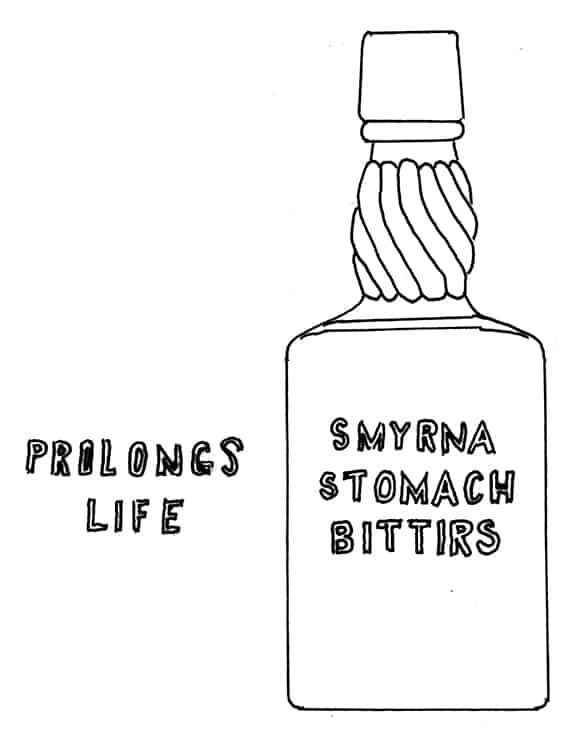 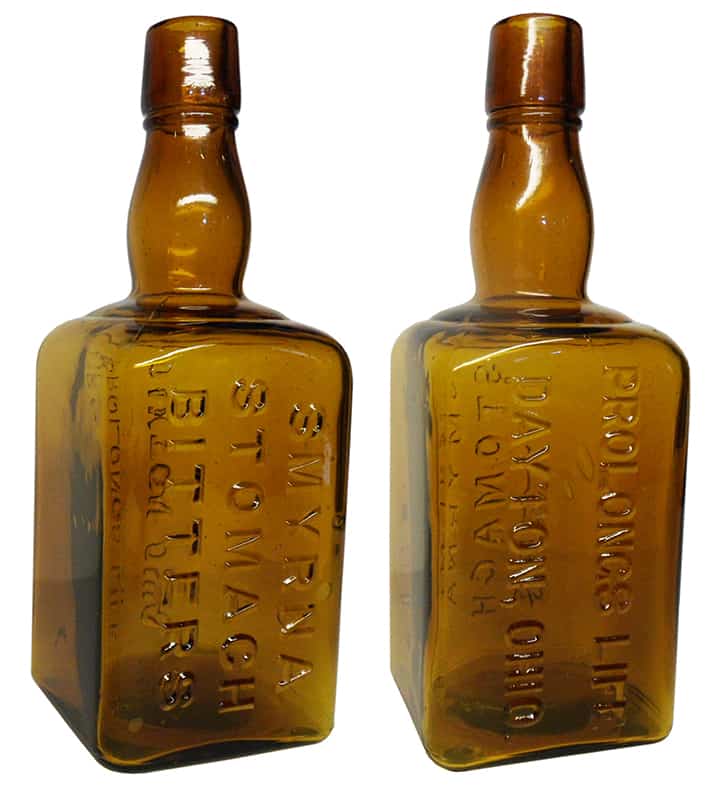 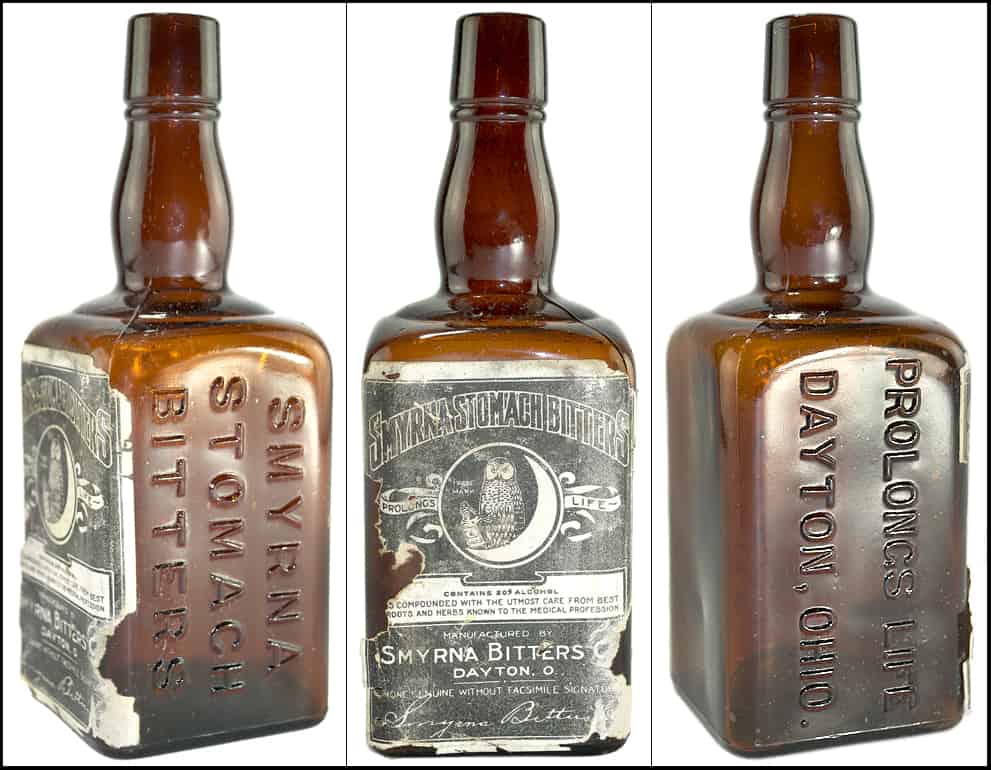 Shoals Aviator Leave for Atlanta on Way to New York — Captain
Roscoe E. Turner left this morning in his huge eighteen-passenger
airplane for Atlanta after spending the past two days in the district.
He will leave Atlanta for New York on a non-stop flight early tomorrow
morning.

Yesterday afternoon he gave an exhibition flight over the district
in the big plane with ten passengers and his two mechanics. H. W. Hall,
photographer for Fox News, was in the party and took moving pictures of
the points of interest which will be shown in the theaters throughout the
country. Four members of the Times-News staff were also in the party,
Miss Lee Mansell, Mrs. R. J. McKinney, A. B. Camper and W. P. Williams.

Turner stated while here that he was anxious for the people in the
district to known the men responsible for the development and increased
interest in aviation, who made possible the bringing to Muscle Shoals the
world’s largest passenger airplane. They are: Messrs. Hal Richeson,
Russell Ray, Sam Basil, George Basil, Thurmond Harris, Joe Jacks, L. M.
Parrish, Chas. Sumner, Sam Roden and Dr. D. T. Boozer.

Ferdinand Meyer V is a native of Baltimore, Maryland and has a BFA in Fine Art and Graphic Design from the Kansas City Art Institute and School of Design. Ferdinand is the founding Principal of FMG Design, a nationally recognized design consultation firm. Ferdinand is a passionate collector of American historical glass specializing in bitters bottles, color runs and related classic figural bottles. He is married to Elizabeth Jane Meyer and lives in Houston, Texas with their daughter and three wonderful grandchildren. The Meyers are also very involved in Quarter Horses, antiques and early United States postage stamps. Ferdinand is the past 6-year President of the Federation of Historical Bottle Collectors and is one of the founding members of the FOHBC Virtual Museum.
View all posts by Ferdinand Meyer V →
This entry was posted in Advertising, Bitters, History, Liquor Merchant, Medicines & Cures, Tonics and tagged bitters, Boozer, cart, dayton, Dow, Frank, Georgia, Gourd, Honey, horehound, horse, Joe, Marianne, Montgomery, ohio, photograph, Smyrna, Stauter, Stomach, Tonic, wagon, wicker. Bookmark the permalink.