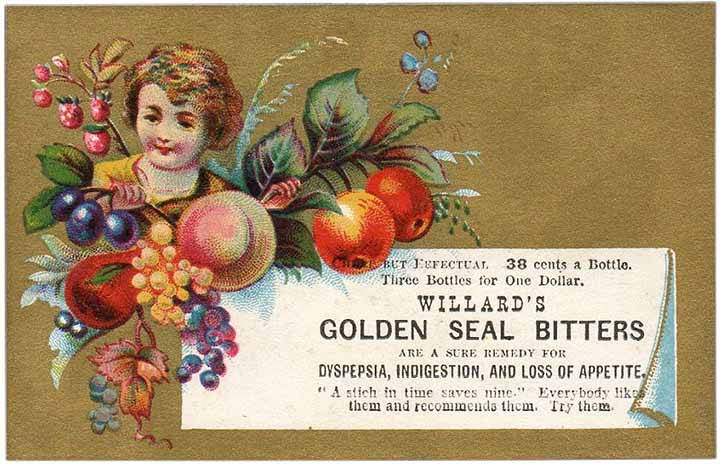 I  thought it might be a good idea to circle back and find out who A. L. Willard was from Taunton, Massachusetts. He was known best for his Willard’s Golden Seal Bitters. He used advertising cards to market his concoction and many of the them said that his bitters were a sure remedy for Dyspepsia, Indigestion, and Loss of Appetite. Many of his trade cards said, “A stitch in time saves nine” Everybody likes them and recommends them. Try them.”

“A stitch in time saves nine” Everybody likes them and recommends them. Try them.”

Abel Lyman Willard was born in Cambridge, Middlesex, Massachusetts on December 10, 1829 and was the Son of Samuel Willard and Charlotte Lincoln. He was married to Eliza Ann Lane and was the brother of Charles Willard. 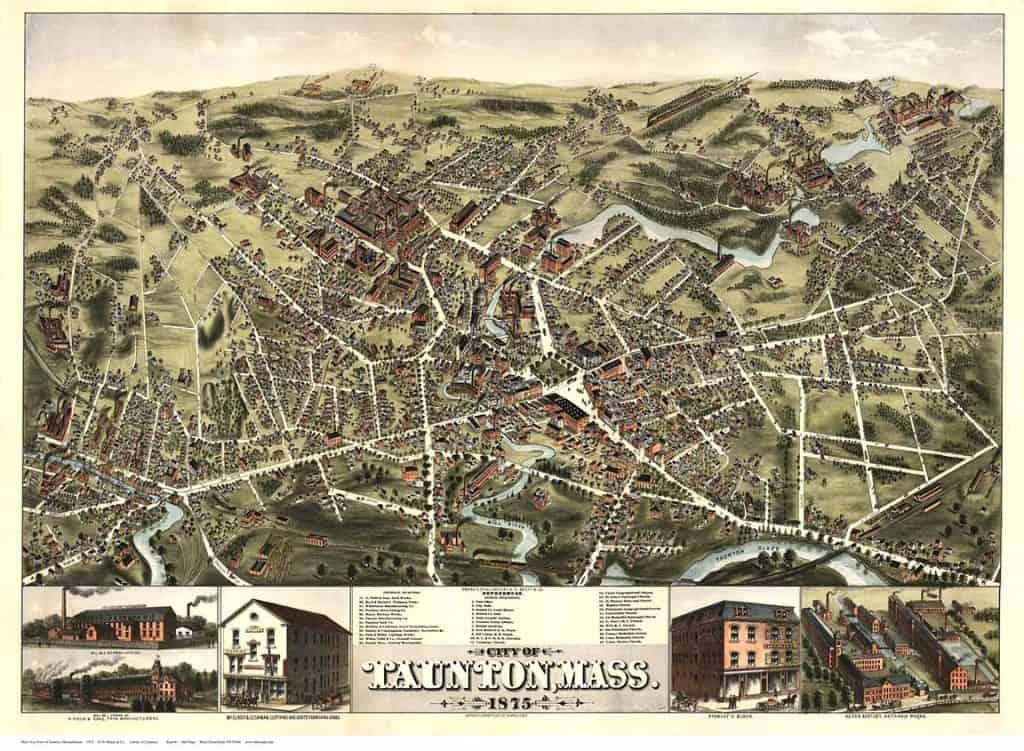 Willard started his apothecary shop and drug store in Weir Village on West Water Street around 1855 in Taunton, Massachusetts. Taunton was settled in the 1600s along the Taunton River. Weir Village (also known as “The Weir”) is a village of the city of Taunton located about one mile south of the city center on the banks of the Taunton River, near the point where it becomes tidal. The village takes its name from fishing weirs which were placed across the Taunton River from pre-colonial times until the early 20th century, to catch herring (also known as “alewifes”). Taunton was an early manufacturing center for products made of iron. In the 1800’s, Taunton was an important railroad junction town with a number of industrial interests. The Mason Machine Works was established at Taunton by William Mason in the 1840’s. The company was a large employer of the community in the manufacture of textile mill machinery and railroad locomotives. 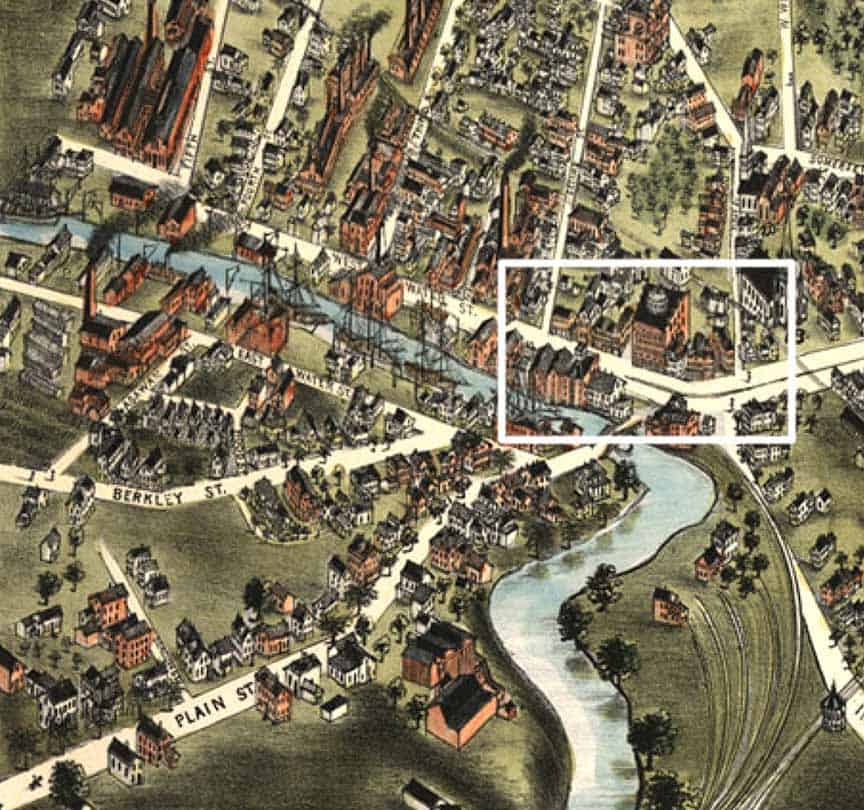 47 West Water Street was in Weir Village. A. L. Willard’s drug store would have been within the white rectangle on the opposite side of the street from the Taunton River.

Willard operated his drug store on West Water Street until he sold out to E. T. Borden & Co. in 1882. His primary seller was Willard’s Golden Seal Bitters. He sold the bitters for 38 cents a bottle or three bottles for a dollar. Later Willard would serve as a City Alderman in Taunton from 1877 to 1879 and again in 1882. He died in Taunton on April 26, 1892.

E. T. Borden & Co., Wholesale Druggists and Apothecaries, No. 47 West Water Street. A leading and representative Taunton house in its particular branch of commercial activity is that of Messrs. E. T. Borden & Co., druggists and apothecaries, at No. 47 West Water Street. The house was founded by A. L. Willard in the year 1859, and the present proprietors succeeded in 1882, and in the period elapsed, through the energy and executive ability devoted to its management, an extensive and prosperous business has been developed. The commodious salesroom is furnished in a style of appropriate elegance, and the stock of pure drugs, chemicals, surgical appliances, proprietary medicines, toilet and fancy articles stationery, etc, is large, comprehensive, and complete. Due care and attention are given to the compounding of physicians’ prescriptions and family remedies. The house has a large and lucrative city and suburban trade, and several clerks are kept busy in the transaction of the extensive general business. Messrs. E. T. Borden and A. H. Standish, composing the firm, are natives of Taunton and practical and skillful druggists, and in the able and popular conduct of their enterprise they have won the highest regard of both professional and business circles.

The “Spring”, “Summer”, “Fall”, and “Winter 4 card set is a subset of a 32 card group. The same 4 cards are repeated 8 times with different colored foregrounds and backgrounds. It has taken me 30 years to gather the entire group. It is a reminder to me of how these cards were collected by little children for their scrapbooks back in the 1880’s. Something like collecting your entire favorite baseball team cards for a particular year. – Joe Gourd 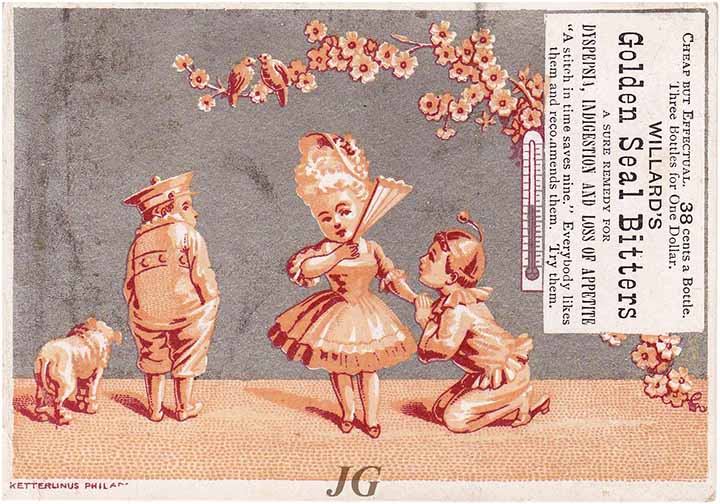 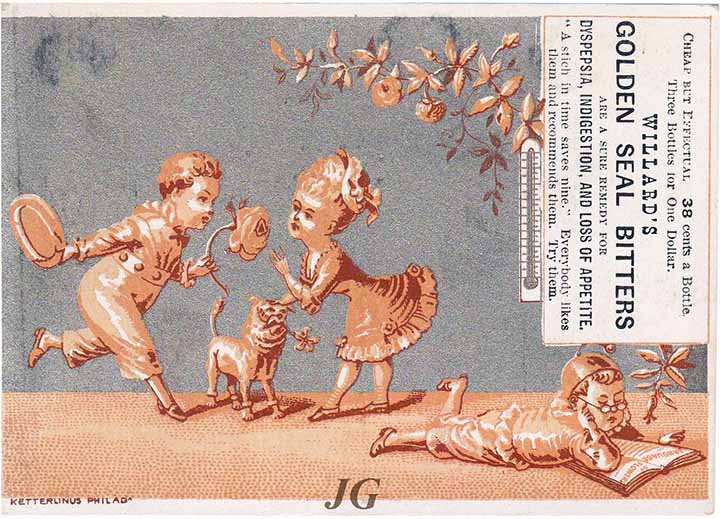 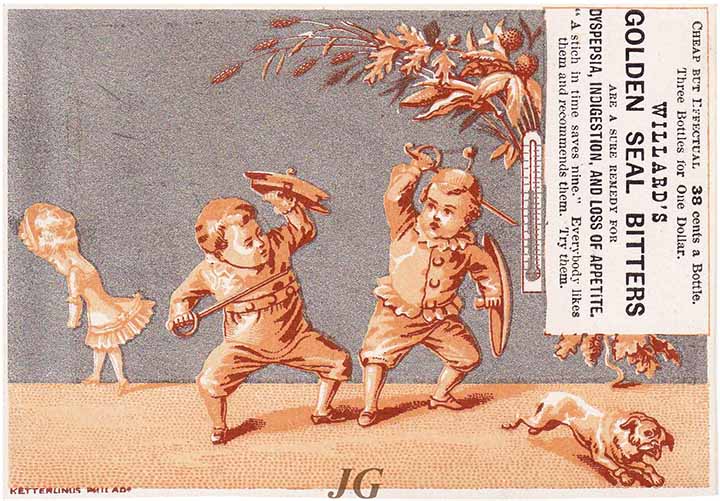 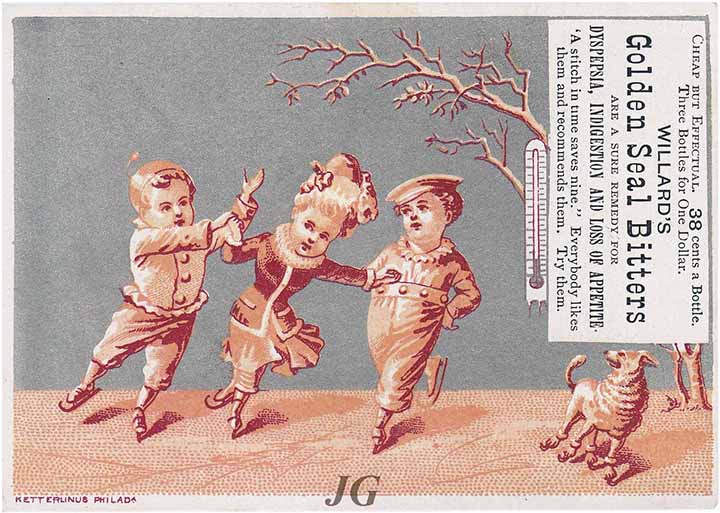 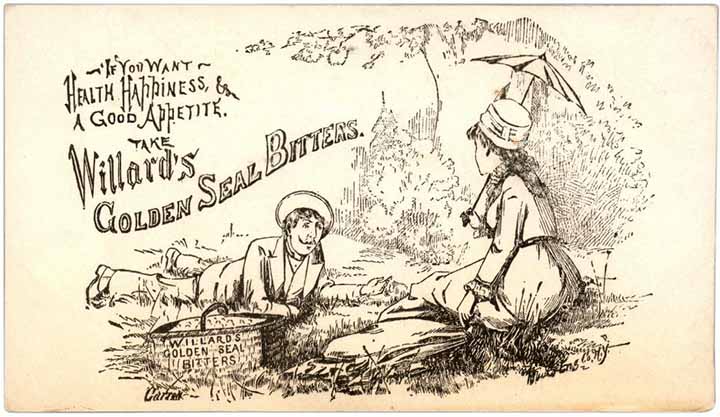 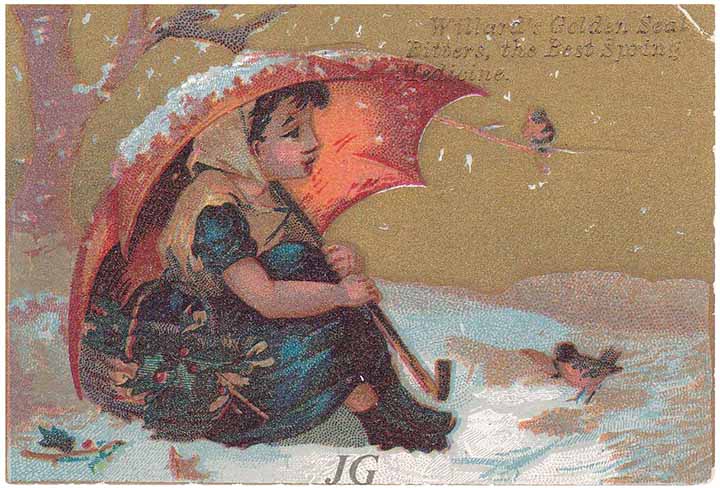 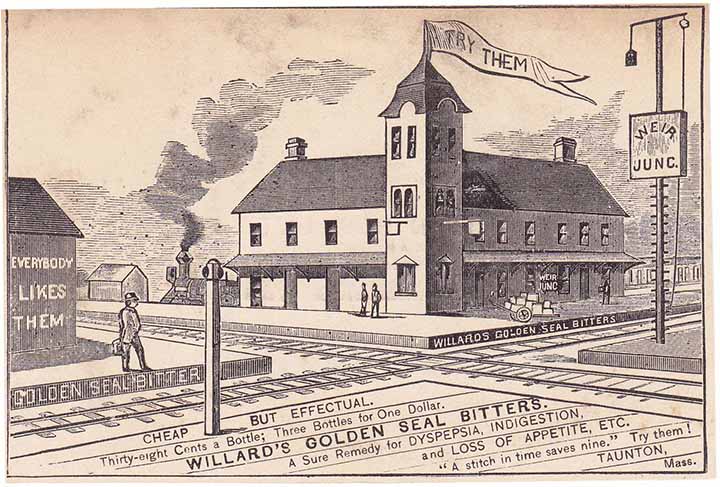 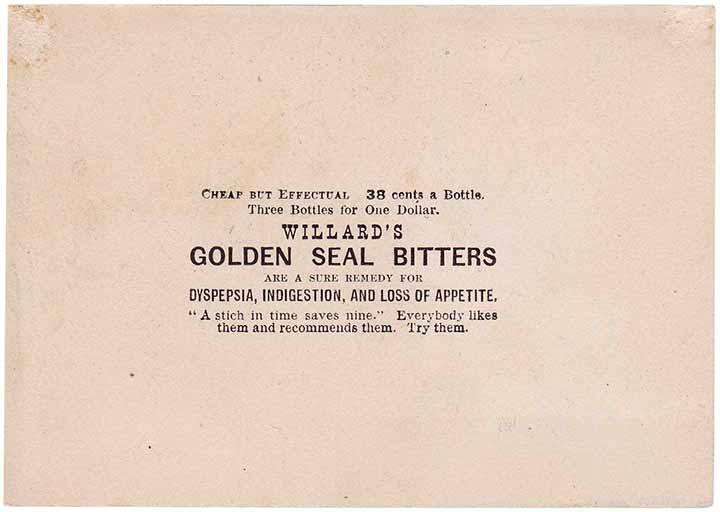 Golden Bitters on a Rainy Day 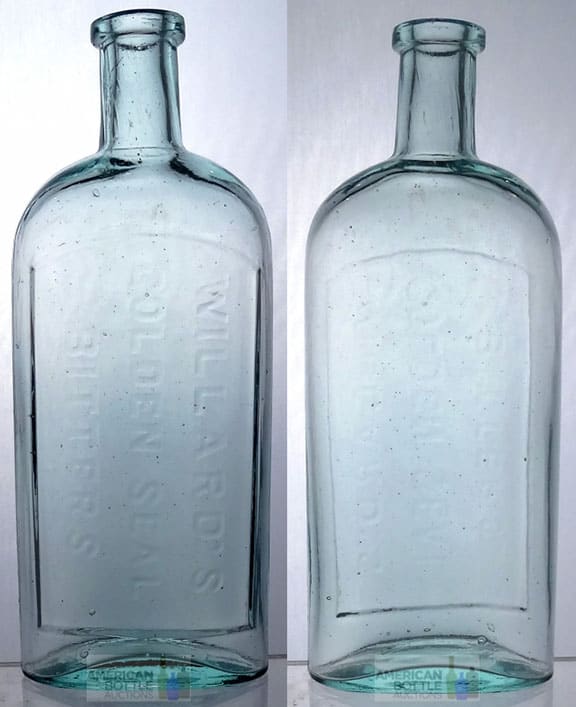 Ferdinand Meyer V is a native of Baltimore, Maryland and has a BFA in Fine Art and Graphic Design from the Kansas City Art Institute and School of Design. Ferdinand is the founding Principal of FMG Design, a nationally recognized design consultation firm. Ferdinand is a passionate collector of American historical glass specializing in bitters bottles, color runs and related classic figural bottles. He is married to Elizabeth Jane Meyer and lives in Houston, Texas with their daughter and three wonderful grandchildren. The Meyers are also very involved in Quarter Horses, antiques and early United States postage stamps. Ferdinand is the past 6-year President of the Federation of Historical Bottle Collectors and is one of the founding members of the FOHBC Virtual Museum.
View all posts by Ferdinand Meyer V →
This entry was posted in Advertising, Apothecary, Bitters, Druggist & Drugstore, History, Medicines & Cures, Trade Cards and tagged Abel, advertising, Apothecary, bitters, Bordon, cards, drug, Druggist & Drugstore, golden, Gourd, Lyman, Massachusetts, seal, Taunton, trade, Weir, Willard. Bookmark the permalink.