Dan Baldwin from Swansea, Massachusetts contacted me yesterday about an exciting new bottle he now has posted on eBay. He described his posting as follows with this clipped image that I embellished: 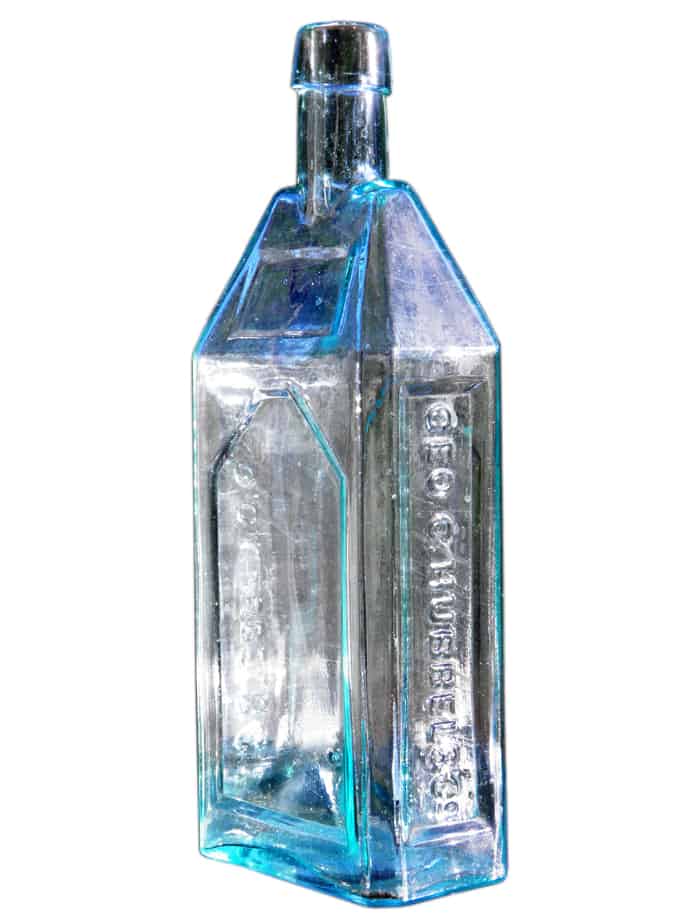 Geo. C. Hubbel & Co. – Unlisted Variant – Golden Bitters Deep Aqua in color, tooled lip, Smooth base, 10 1/4″ tall x 3 3/4″ x 2 1/4″ American – Blown at a NY state Glassworks circa 1860- 1870 for a Hudson NY merchant. A fine example with no condition issues. Embossed on 2 of 4 sides, It lacks the GOLDEN BITTERS embossing but one is noted as found with a GOLDEN BITTERS label, of which only 2 have been recorded sold at public auction since 1998. This particular example also has a recessed area on one of the roofs which to my knowledge is unlisted. A rare possibly unlisted variant of the Golden Bitters

The Carlyn Ring and W.C. Ham listing in Bitters Bottles is as follows for the typical embossed bitters example. I have also pictured two of my embossed GOLDEN BITTERS examples below.

Here is the listing for the subject bottle: 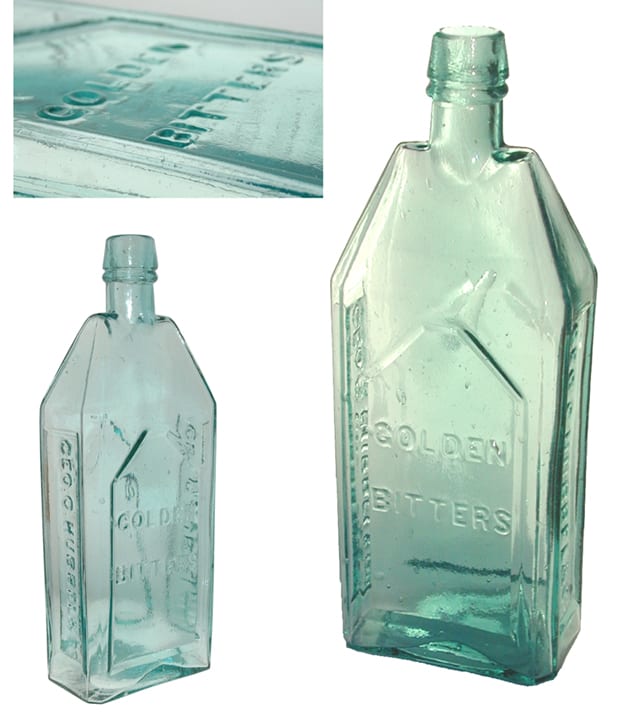 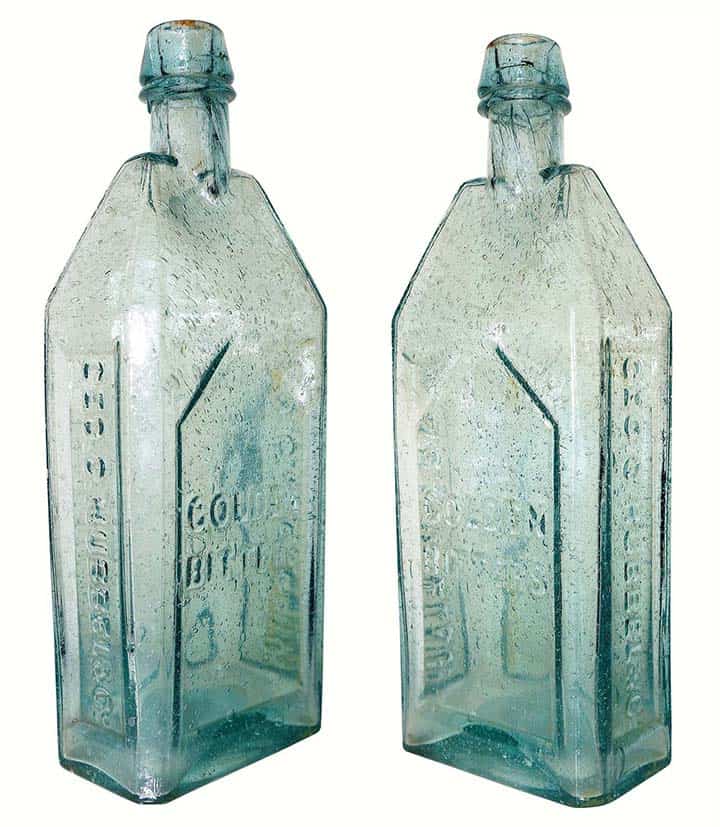 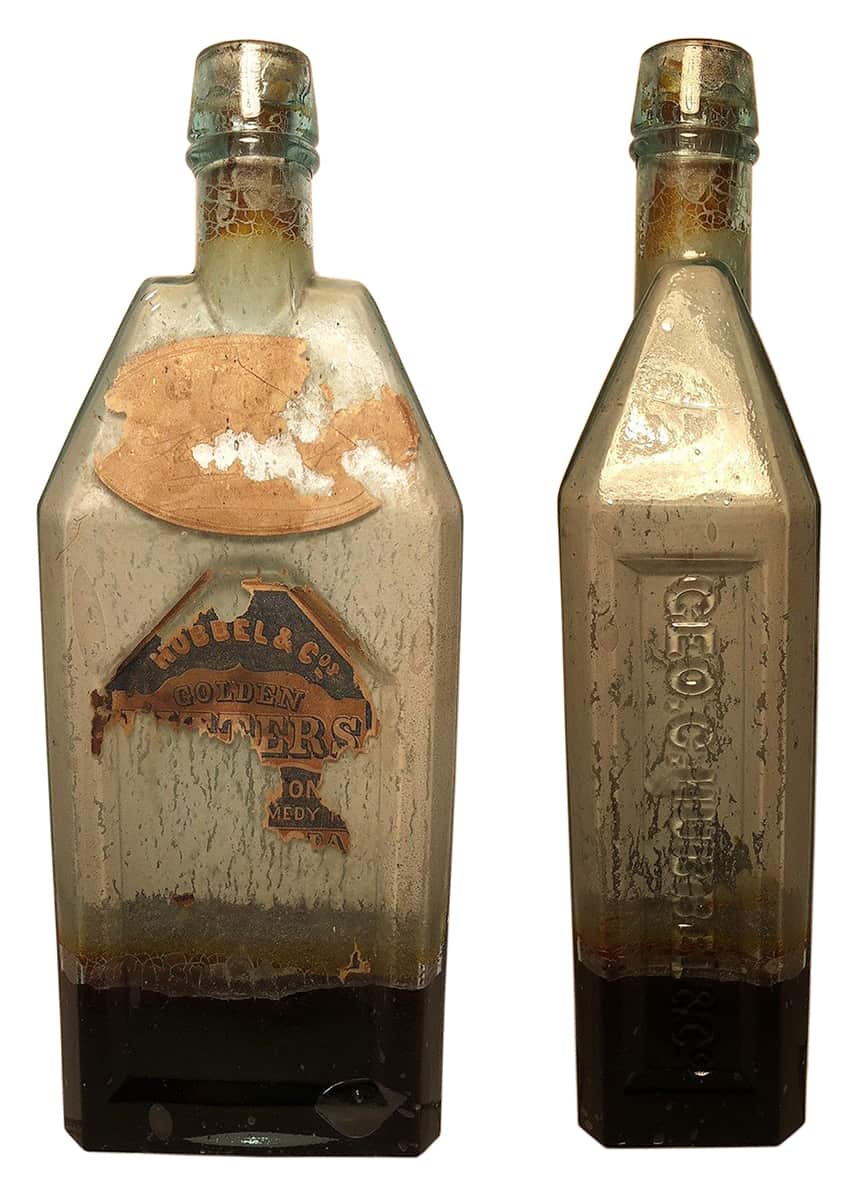 Golden Bitters was produced by George Coffin Hubbel from his like-named George C. Hubbel Co. in Hudson, New York which was located on the corner of Water and Ferry Streets. His son, Henry W. Hubble also sold groceries from this address. You can see a cool picture of the building below with a GOLDEN BITTERS sign on the front and a smaller Geo. C. Hubbel & Co. sign below. The bottle we are talking about is in the form of a semi-cabin and was advertised and sold from 1863 – 1868 in major cities in United States. 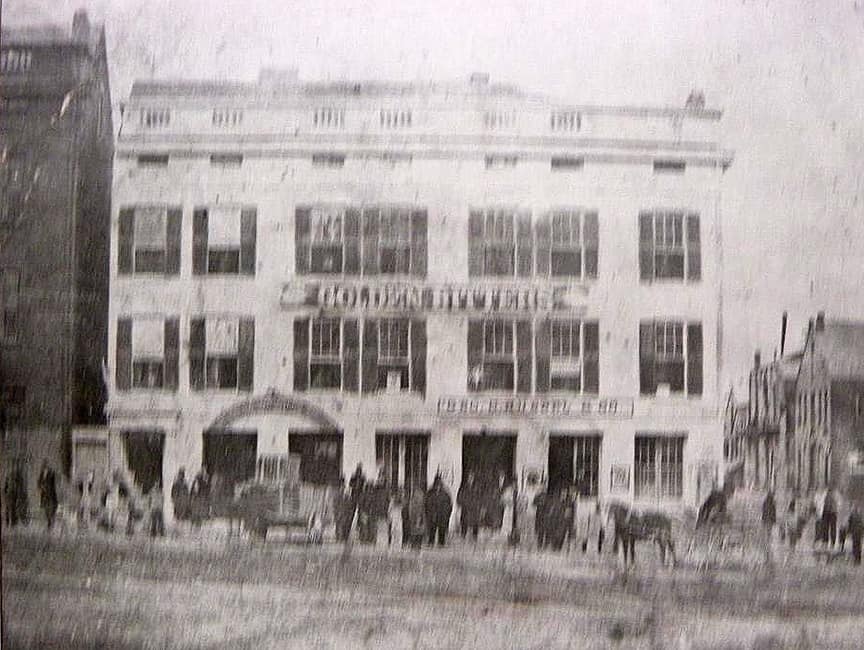 The picture, which is reproduced in A Pictorial History of Columbia County, published by Hudson-Catskill Newspapers. The caption reads: The Old Hubbel Corner one of Hudson’s century old landmarks, located at the corner of Ferry and Water streets, continues to defy the ravages of time. For many years, Hubbel’s “Golden Bitters,” a widely known preparation, was manufactured here by George C. Hubbel & Co. The product enjoyed extensive sale and its name was linked with Hudson over a broad area for many years. Later the building was the Columbia Knitting Co. which later was moved to Virginia to be nearer the cotton fields of the South. In the day of steamboating this was one of Hudson’s busiest corners. – Picture Frank Wicker

George C. Hubbel’s New York City address for his warehouse and central depot was No. 55 Hudson Street within the American Express Building.

During that period they have not only pursued a most liberal system or newspaper advertising; but every vacant fence curbstone, ferry-landing, even the rocks on the highway, have been embellished with large placards, “G — 1863 — B.”, “Hubbel’s Golden Bitters,” and hundreds of others, which have become to New-Yorkers as familiar as household words.

Golden Bitters was introduced in 1863, in the midst of the Civil War and advertised nationally. During that period Hubbel painted vacant fences, curbstones, ferry-landings, and even the rocks on the highway, with large placards reading “G — 1863 — B.”, “Hubbel’s Golden Bitters,”. Many people had this marketing phrase embedded in their minds when ordering a Golden Bitters. You can see this phrase on the advertising trade card below and many other pieces. He said it was the”Best Tonic in the World”. Much of his advertising also included an American eagle though it is not embossed on the bottles as the top-most illustration suggests. 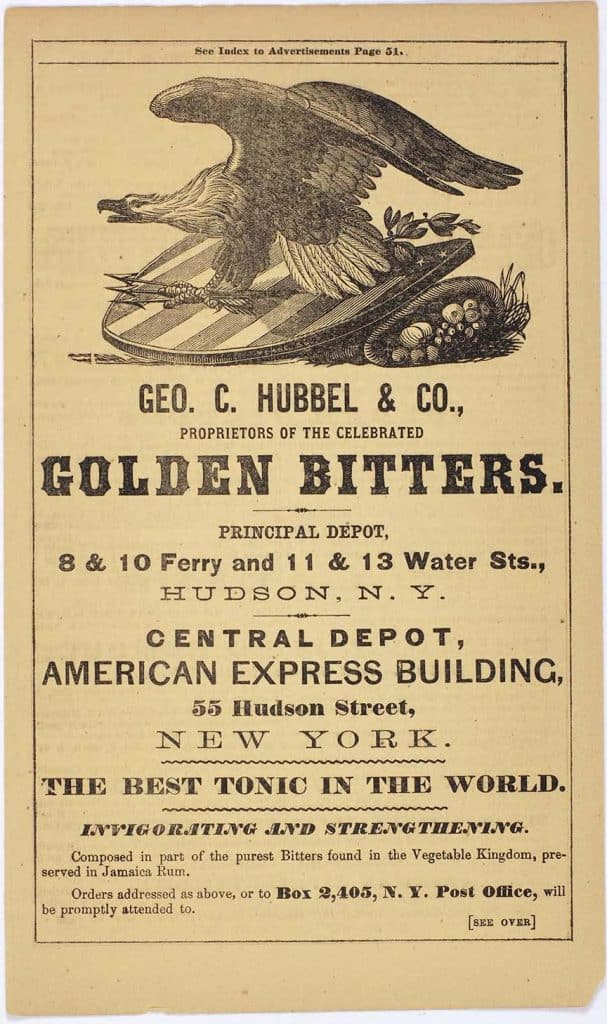 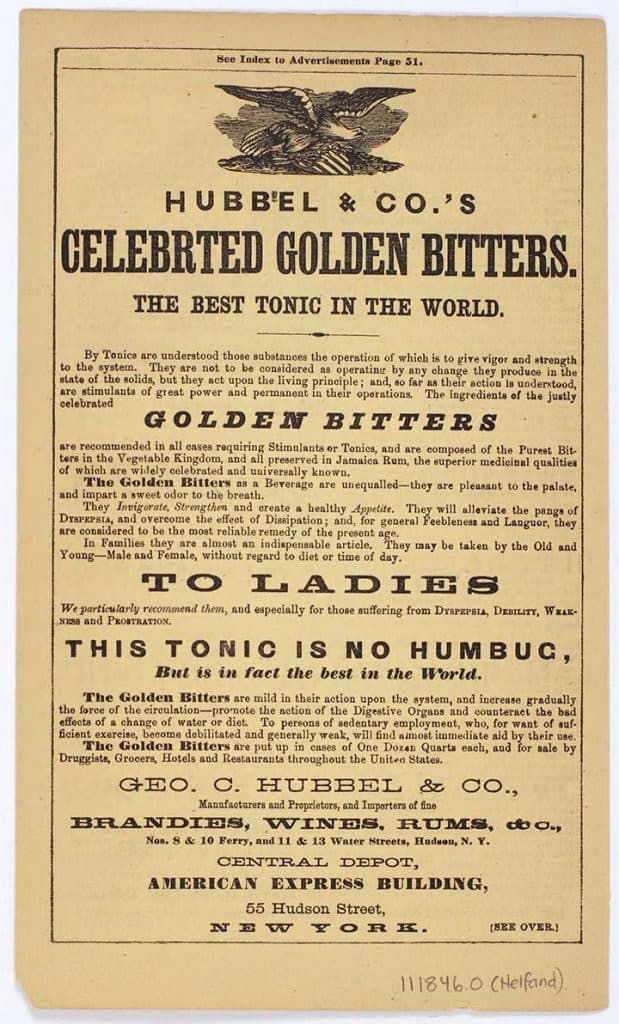 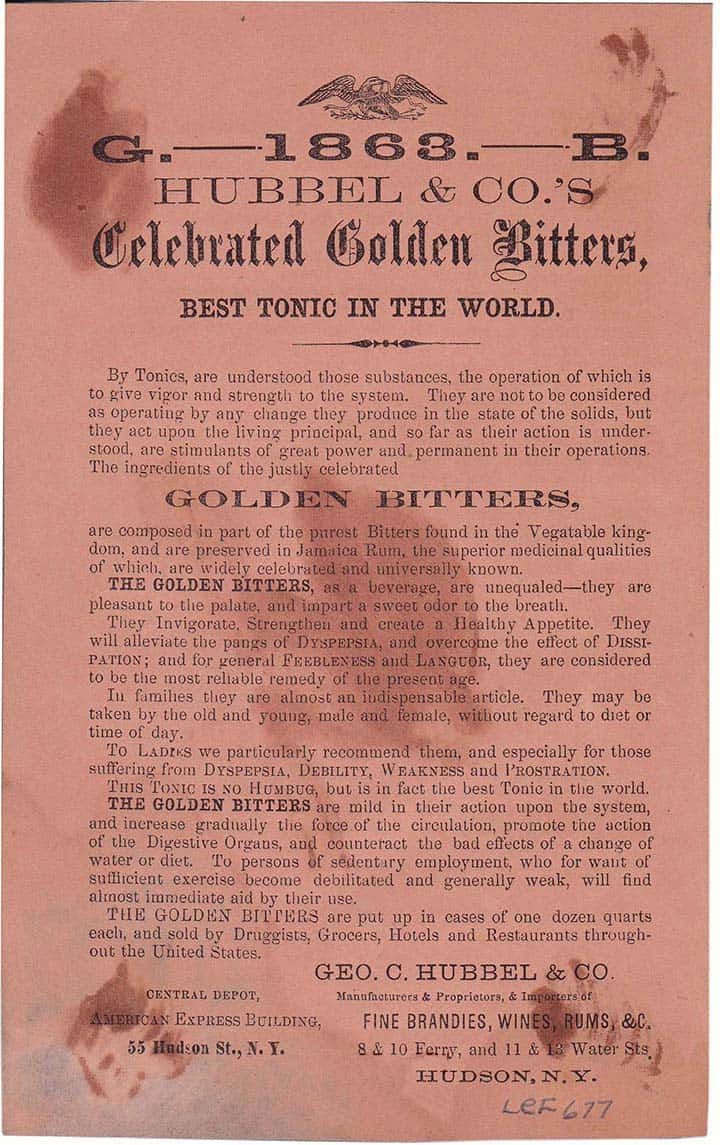 Some of their advertising noted that the production of Golden Bitters involved the employment of over one hundred hands, and that they had the capacity to manufacture ten thousand bottles per day! No wonder many of us bitters collectors have examples in our collection!

By 1868, George C. Hubble was not mentioned in Golden Bitters advertising as the proprietor. This would be the last year for sales at least as  far as I can determine. Ads this year would note that his son, Henry W. Hubbel was General Agent. Hubble would die in New York in 1872. 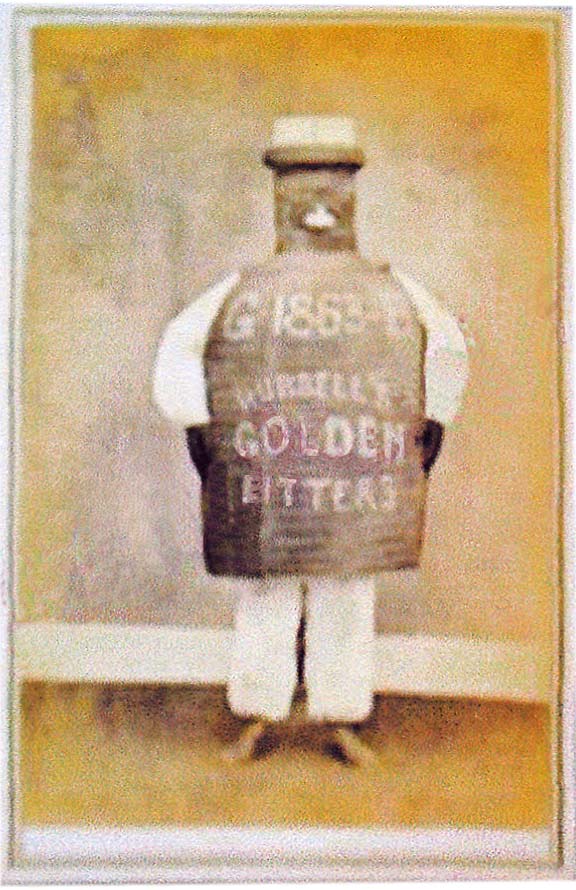 Multiple-advertisement lettersheet (termed a “billboard” by some
philatelists). Opposite (below): Golden Bitters advertisement – Ben Swanson Collection

Multiple-advertisement lettersheet (termed a “billboard” by some philatelists). Golden Bitters advertisement in top center (see opposite side above) – Ben Swanson Collection

From the New-York Evening Express.

Many of the tonic preparations which are now giving universal satisfaction to the public were denoted [to the fair] in large quantities; prominent in the list was a generous invoice of Golden Bitters, from the manufacturers, GEORGE C. HUBBEL Co., of Hudson, N.Y., and whose warehouse is in the American Express Building, No. 55 Hudson-street, in this City. Although only recently introduced, the intrinsic value of this preparation has already produced a large demand, which is constantly increasing, and already promises fame and fortune to its energetic producers. That they not only understand the way to make a superior tonic drink; but that they have abundant business ability to let the public become fully aware of the fact has been amply demonstrated, in the seven or eight months just passed. During that period they have not only pursued a most liberal system or newspaper advertising; but every vacant fence curbstone, ferry-landing, even the rocks on the highway, have been embellished with large placards, “G — 1863 — B.””Hubbel’s Golden Bitters,” and hundreds of others, which have become to New-Yorkers as familiar as household words. It is claimed that these Golden Bitters have many superior medicinal qualities, independent of the one they are mostly employed for — an appetitive power. For Dyspepsia, Heartburn, General Debility, and Prostration, as well as for females of quiet habits, these bitters are said to be of superior value. In order to illustrate how readily a good thing can be remuneratively brought out in these days of progress, it is only necessary to state the facts, that the fabrication of the Golden Bitters, already incurs the employment of over one hundred hands, and the capacity of the manufactory is equal to the production of ten thousand bottles per day; yet it is said that so great is the demand that these, facilities will soon have to be largely increased. As a beverage, the Golden Bitters are extremely palatable, and those desiring a mild stimulant will undoubtedly find this an agreeable and beneficial one. While dealers only are supplied by the manufacturer, this bitters can be procured of Druggists, Grocers, at Hotels, Restaurants, etc., throughout the country, and even in the public drinking houses it is becoming a fashionable drink.

Ferdinand Meyer V is a native of Baltimore, Maryland and has a BFA in Fine Art and Graphic Design from the Kansas City Art Institute and School of Design. Ferdinand is the founding Principal of FMG Design, a nationally recognized design consultation firm. Ferdinand is a passionate collector of American historical glass specializing in bitters bottles, color runs and related classic figural bottles. He is married to Elizabeth Jane Meyer and lives in Houston, Texas with their daughter and three wonderful grandchildren. The Meyers are also very involved in Quarter Horses, antiques and early United States postage stamps. Ferdinand is the past 6-year President of the Federation of Historical Bottle Collectors and is one of the founding members of the FOHBC Virtual Museum.
View all posts by Ferdinand Meyer V →
This entry was posted in Advertising, Bitters, Digging and Finding, eBay, Ephemera, Figural Bottles, History, Liquor Merchant, Medicines & Cures, Tonics and tagged advertising, Ben Swanson, bitters, cabin, Dan Baldwin, Geo C Hubbel & Co, George, golden, Golden Bitters, Hubbel, New York, semi-cabin, variant. Bookmark the permalink.