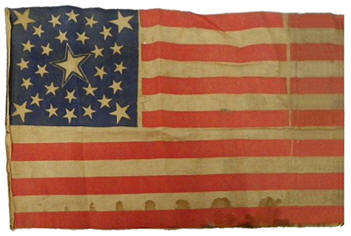 On February 23, 1866, George P. Frederick may have opened his morning newspaper with coffee and a biscuit only to read with interest the following lines titled “The American Star“. So moved, he may have decided to name his new great remedy, the American Star Bitters.

THE STAR OF AMERICA

We have the “Star of Hope” and the “Star of Destiny,” the North Star and the “Star the Evening,” the “Lone Star-ry Hour” many a “bright, particular star;” not to mention the “stars that sang together” and number less galaxies that hang in the heavens of Poesy. But a fair young friend, not less gifted than patriotic sends us the following original lines on:

The form may be manly and lofty the brow
On which the gold coronet securely rests now;
Brilliant the gildings surrounding the throne
Where millions abide ‘neath the sceptre of one.
But what gem in the West gleams so fair from afar?
Tis the beacon of FREEDOM –  th’ American Star!

Its rays flash abroad o’re ocean’s grand waves –
At home it sheds light on thousands of braves,
Whose deeds and whose valor have won them a name
Recorded in honor on the tablets of fame:
Whose noble impulses, in peace or in war,
Will shield the proud splendor of th’ American Star.

Guard it, ye freemen! for bitter the woe
Attending the onset, if ye yield to the foe;
Protect it in glory, and ne’er let it fall
From its Zenith of splendor, the highest of all.
Then its lustre so shining no traitor can mar,
Nor dim the bright beauty of th’ American Star. 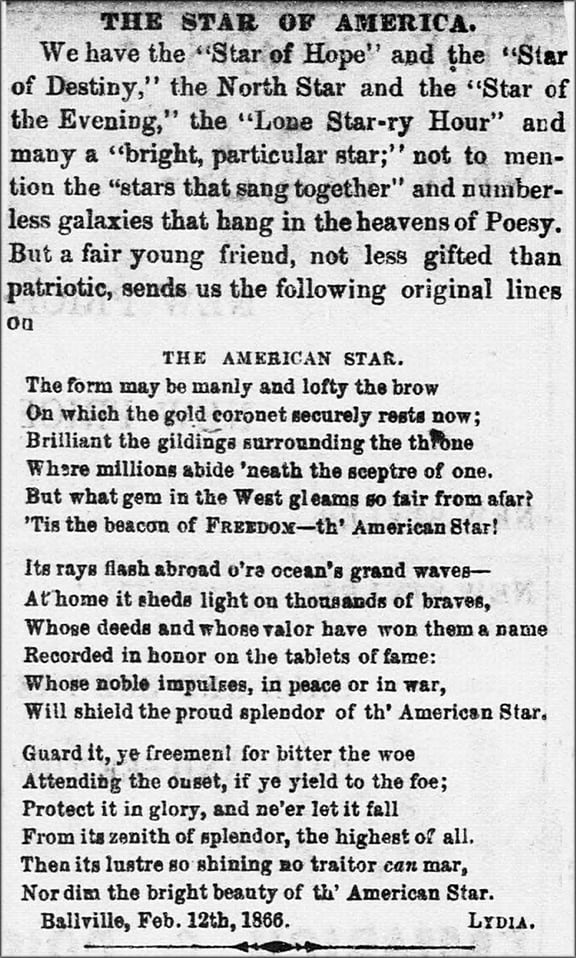 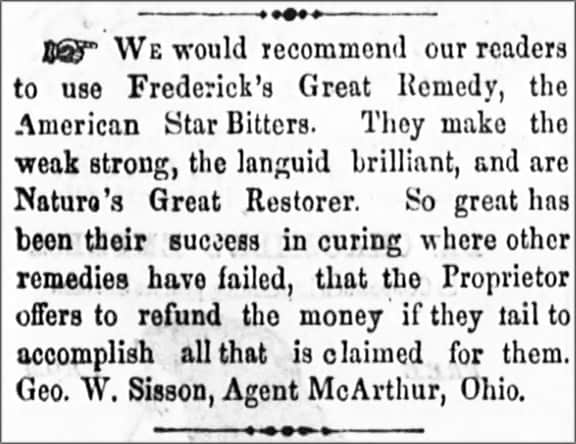 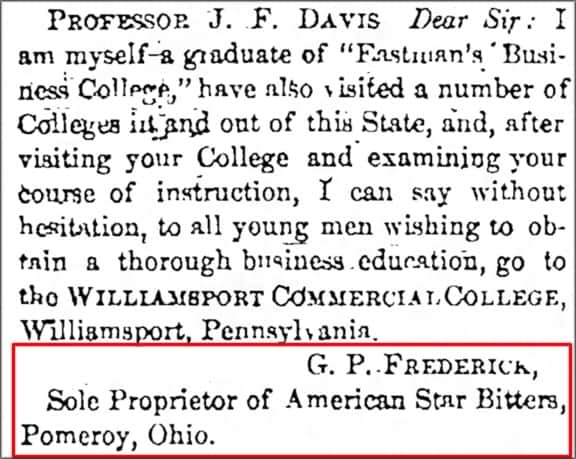 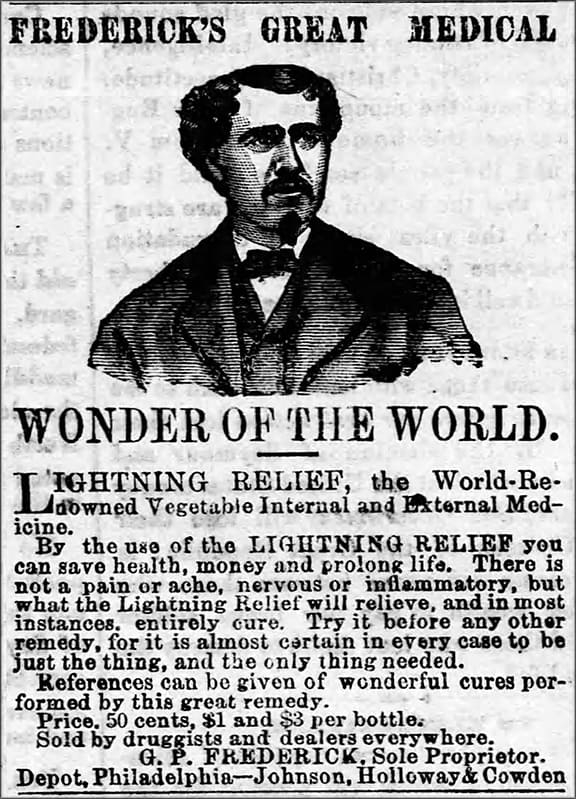 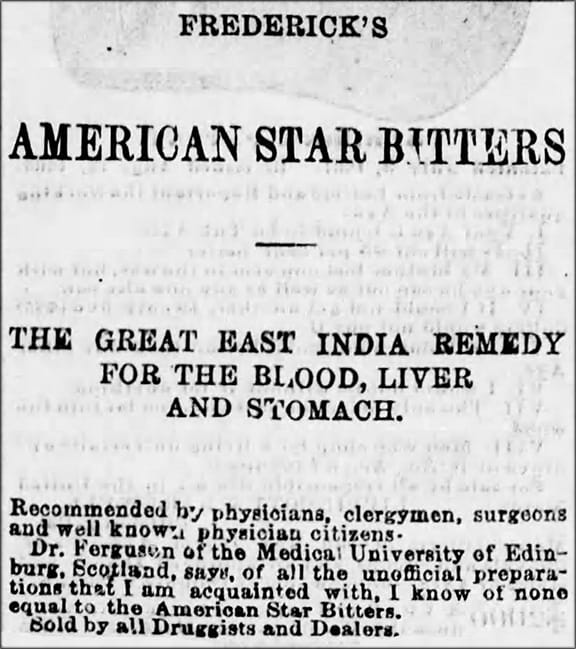 Top Flag Image: 30 Stars, 1848-1851. This well made and attractive parade flag of 30 stars pre-dates the Civil War and is very rare. This style of printed parade flag, which consists of a medallion pattern with a double wreath of stars, four corner stars, and a large haloed center star, was produced in several star counts, up to and including 42 stars, but the earliest of the type is the 30 star variation shown here. The coloration on this flag, despite being 160 years old, remains vibrant and bold. The flag commemorates Wisconsin’s statehood and is among the earliest of all printed parade flags. – RareFlags.com 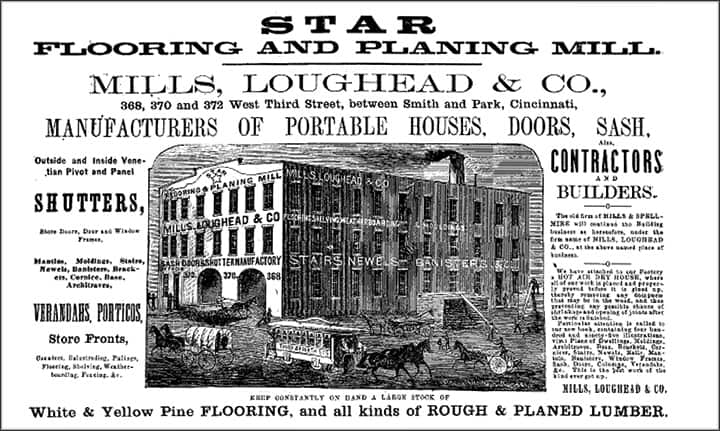 Of course Frederick did not have a monopoly on using a star. Many businesses used a star in their logo such as Star Flooring and Planing Mill in Cincinnatti around the same time period. Lot’s of bitters products with stars too such as Maynard’s Star Bitters, Steele’s Niagara Star Bitters and Morning Star Bitters to name few. Remember, this is right after the Civil War that tore apart our nation. The star symbolized unity and was patriotic. 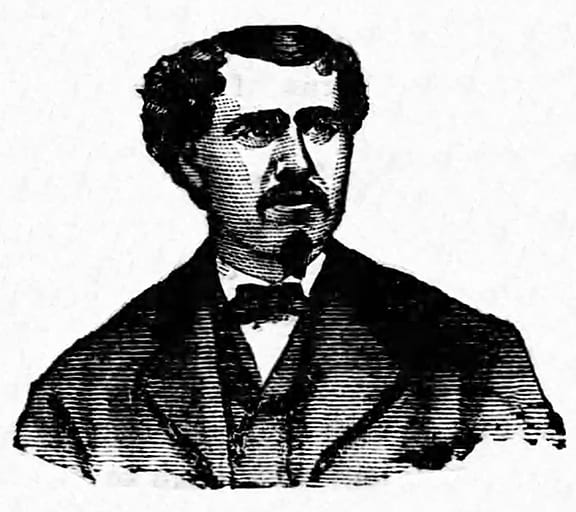 With scant information, we can place George P. Frederick as a druggist in Pomeroy, Ohio and 1867 and Northumberland, Pennsylvania in 1870. The census record for that year shows him to be 40 years old saying he was born in Armstrong County, Pennsylvania.

In 1867 and 1868, he advertised his “Great Remedy”, “American Star Bitters” in Pomeroy, OH and Harrisburg, PA. He said is was first discovered and used by Professor Love in 1852 in the East Indies curing thousands of sick souls in Calcutta, Bombay and the surrounding country. Mr. Frederick claimed to obtain Professor Love’s recipe in 1863 in Havana, Cuba where the professor was also saving thousands of lives during the rage of Cholera. He also claimed that Dr. Ferguson of the Medical University of Edinburg, Scotland said, “of all the unofficial preparations that I am acquainted with, I know of none equal to American Star Bitters”. Frederick also sold “Lighting Relief” and called it “Frederick’s Great Medical Wonder of the World”. Mr. Frederick died in Homer City, Indiana, Pennsylvania in 1913. This bitters seems to be unlisted in the Bitters Bottles books by Carlyn Ring and Bill Ham

Ferdinand Meyer V is a native of Baltimore, Maryland and has a BFA in Fine Art and Graphic Design from the Kansas City Art Institute and School of Design. Ferdinand is the founding Principal of FMG Design, a nationally recognized design consultation firm. Ferdinand is a passionate collector of American historical glass specializing in bitters bottles, color runs and related classic figural bottles. He is married to Elizabeth Jane Meyer and lives in Houston, Texas with their daughter and three wonderful grandchildren. The Meyers are also very involved in Quarter Horses, antiques and early United States postage stamps. Ferdinand is the past 6-year President of the Federation of Historical Bottle Collectors and is one of the founding members of the FOHBC Virtual Museum.
View all posts by Ferdinand Meyer V →
This entry was posted in Advertising, Bitters, Druggist & Drugstore, History, Medicines & Cures, Remedy and tagged american, bitters, Cholera, Dr. Ferguson, Druggist & Drugstore, East Indies, edinburg, Frederick, George, Harrisburg, love, Northumberland, ohio, Pennsylvania, Pomeroy, Professor, Remedy, Star. Bookmark the permalink.