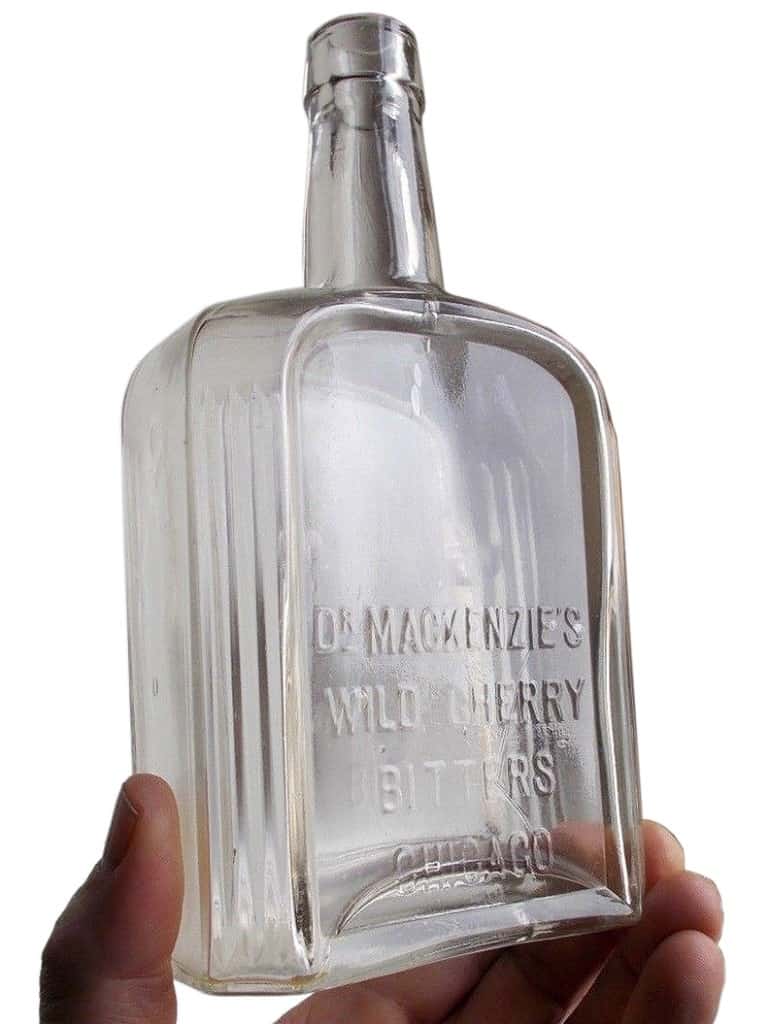 A M5, Dr. Mackenzie’s Wild Cherry Bitters closed on eBay last week. See Listing. The eBay picture is at the top most position of this post. I clipped it for clarity. This is a tough bottle to figure out with no examples with labels or advertising apparent. It looks like Lou Holis picked it up:

Hi Ferd: I find this bottle very interesting that I just picked up. In the Ring and Ham Bitters Bottles book, it is listed twice as M-5 (Dr. Mackenzie) and also M-60 (Dr. McKinzie) which is the one I have spelled Mackenzie’s. The M-60 is spelled McKinzie. Not many bitters have two separate listings of almost the same bottle and same company. Looked for it on your site but found nothing. Lots of Wild Cherry Bitters bottles there but not this one. Thanks and Happy New Year – Lou Holis 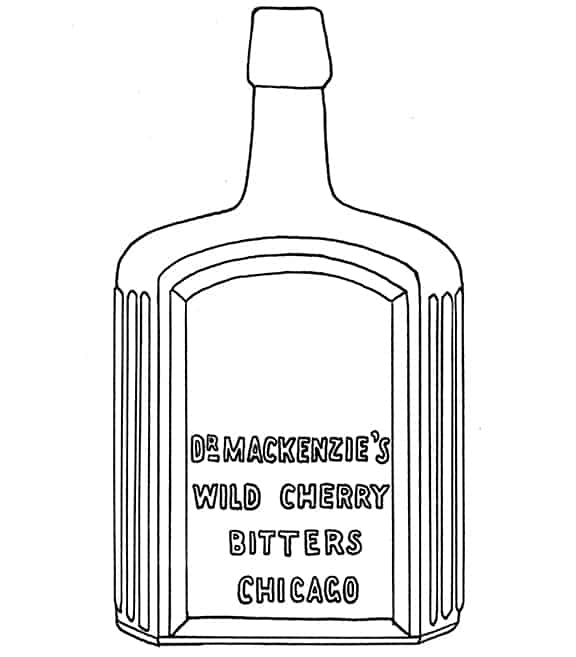 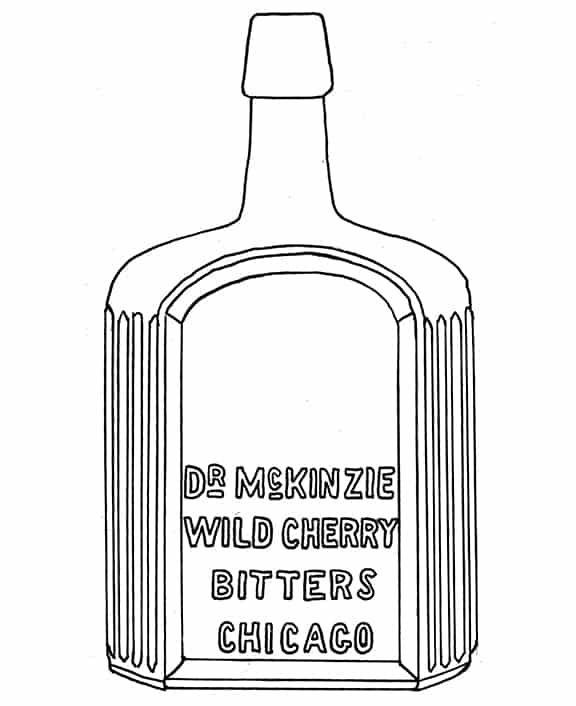 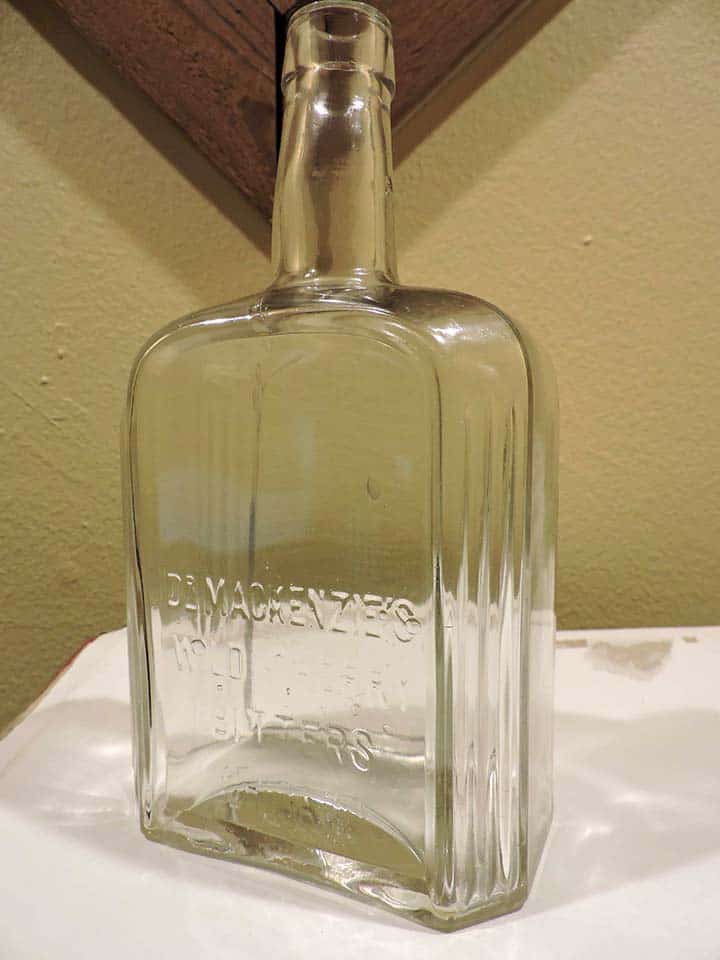 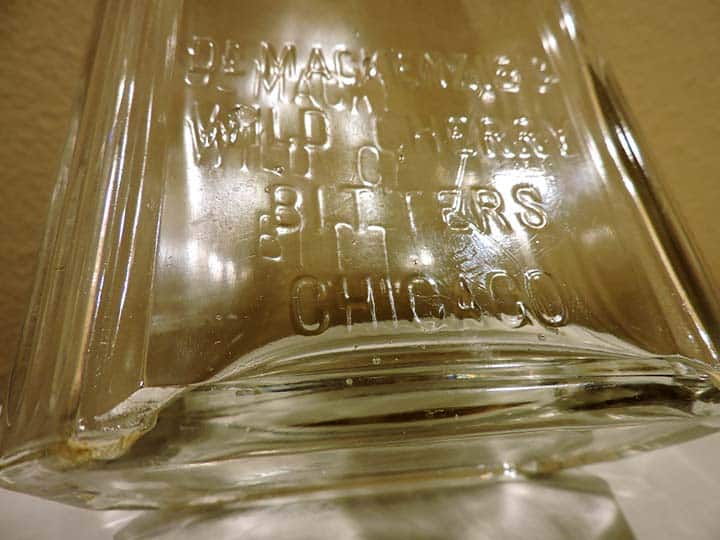 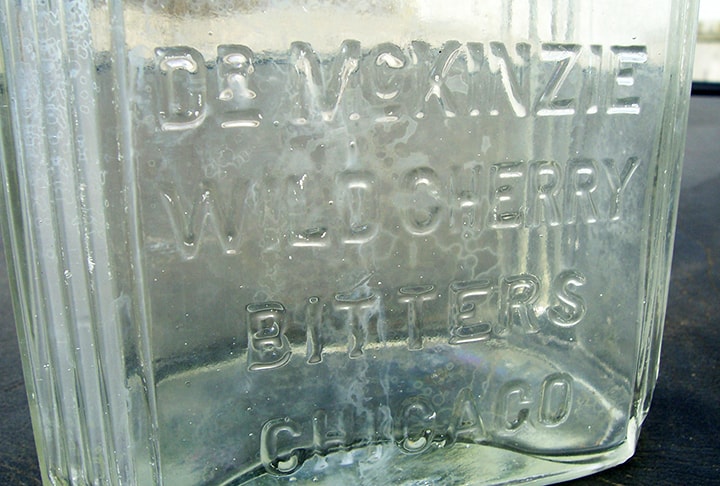 Bitters authority, Frank Wicker over at BottlePickers.com says, “Here is a bitters bottle that I as of now, I can’t find anything about. It is embossed DR. MACKENZIE’S / WILD CHERRY / BITTERS / CHICAGO. According to a labeled example, the company of this product was A. Bauer & Co. located at 158 East Huron Street, Chicago, Ill.” Frank goes on to say “that this bottle is the same shape as the Russell Med. Co. // Pepsin Calisaya Bitters, which is also from Chicago.” Read: Augauer Bitters and the Gauer Family – Chicago. 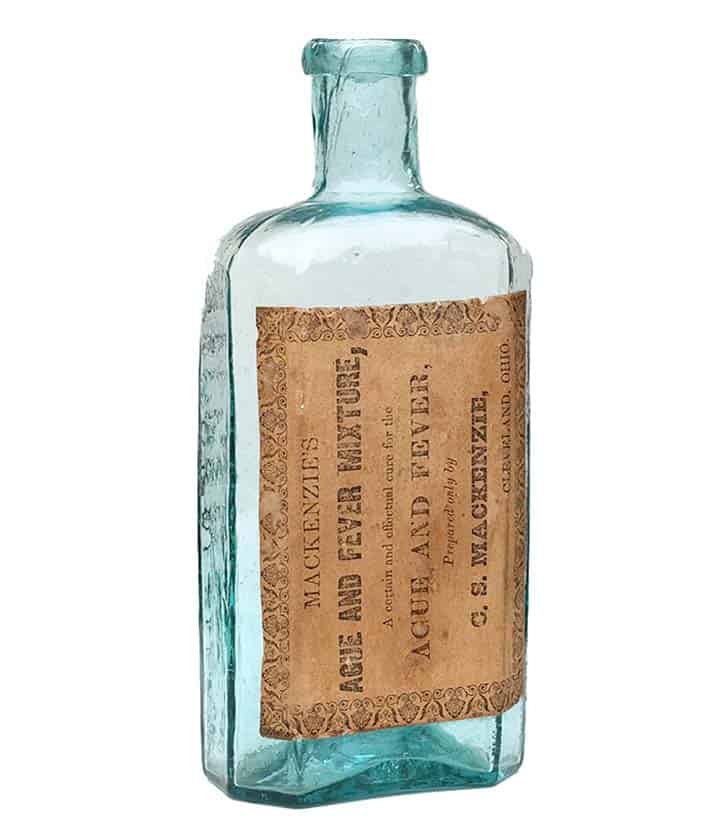 Next, I thought the Dr. Mackenzie’s Bitters or as we see also, Dr. McKinzie Bitters might have been made by Henry Mackenzie who was a grocer in Chicago from about 1861 to 1892 when he died. You can see an example of a stoneware jug below. I doubt this is our fellow either. Note that Carlyn Ring and Bill Ham say that an example (M 58) was found in basement of an old restaurant in Madison, Wisconsin. 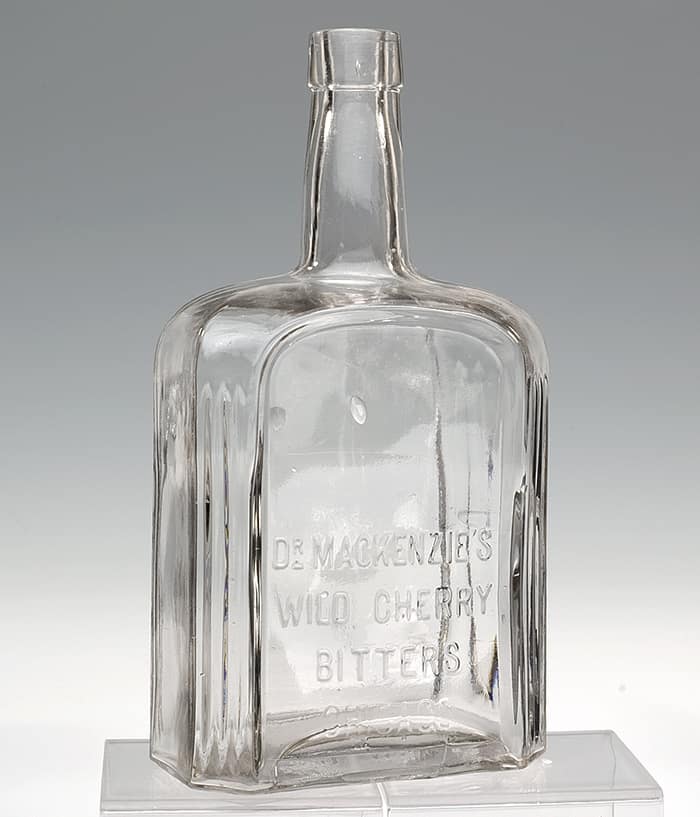 “DR MACKENZIE’S / WILD CHERRY / BITTERS / CHICAGO”, America, 1890 – 1900. Colorless, rectangular with beveled corners, tooled sloping collar – smooth base, ht. 8 ¼”, sparkling mint. R/H #M5. One of several companies that chose to use this general form for their bottle including Augauer, Harter’s, and the Dr. Russell Pepsin Calisaya. Arguably, this is one of the scarcer molds to acquire. – American Glass Gallery | Auction #14 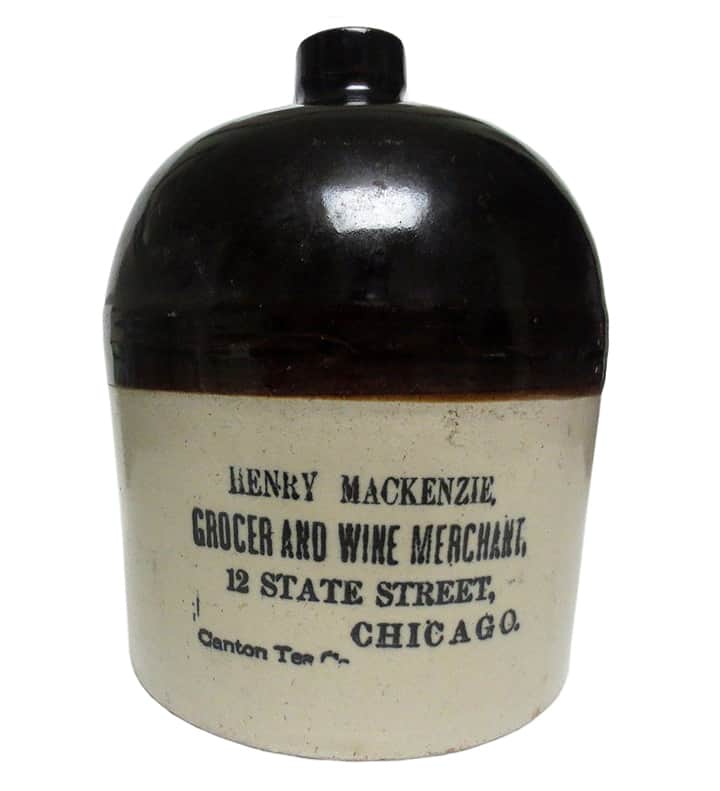 An outstanding example of the scarce to rare Chicago advertising stoneware jug of Henry Mackenzie, Grocer and wine merchant, 12 State St. Chicago. The manufacturer of this wonderful piece of stoneware is identified in black script as Sherwood Bros, New Brighton Pa, manufactures.. Company founded in 1879. The jug is 9 3/4 inches tall. – eBay

In quick order the constables seized 16 cases of counterfeit Kummel and 4 cases of Benedictine. Then 240 embossed bottles of Angostura bitters were discovered along with phony wrappers.

Last we will look at A. Bauer & Company located at 158 East Huron Street in Chicago, Illinois. Remember Frank Wicker references this information on a labeled example. Whiskey authority Jack Sullivan has written about Bauer before. Read: Chicago’s Alexander Bauer: Spirits, Sex and Scams. From what Jack says about Alexander Bauer, I don’t think we can trust any one of his labels on a bottle. 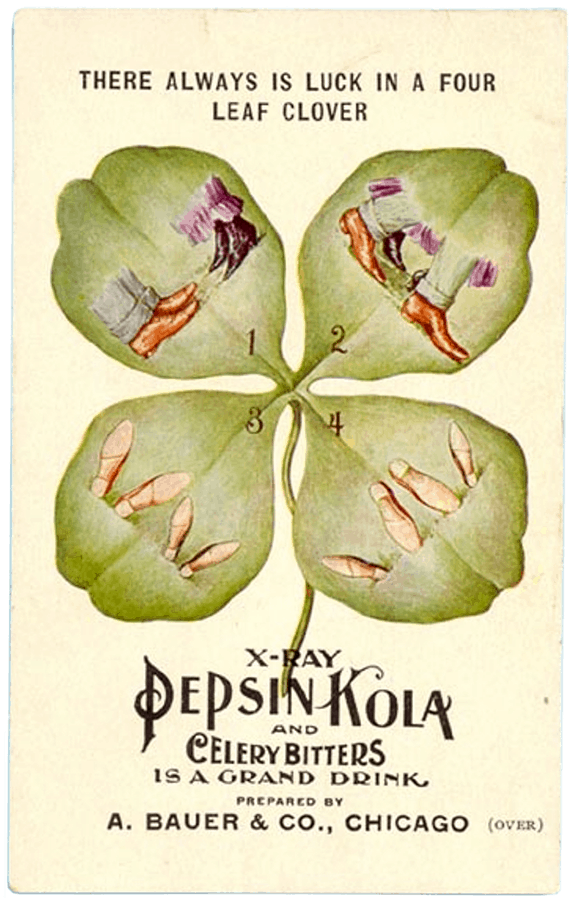 [From Jack Sullivan] What they found was startling. The first seizure was a case of Hennessy brandy. Bauer admitted that it was not genuine but said he was not responsible for having it in his possession. In quick order the constables seized 16 cases of counterfeit Kummel and 4 cases of Benedictine. Then 240 embossed bottles of Angostura bitters were discovered along with phony wrappers. Another large lot o counterfeit labels was found in the basement. They were for James E. Pepper Whiskey, Gilka Kummel, and Boonekamp Bitters. It is clear that Bauer was taking old bottles, some of them the genuine article with names blown in the glass, refilling them, slapping on a faux label and selling them as the real McCoy.

Ferdinand Meyer V is a native of Baltimore, Maryland and has a BFA in Fine Art and Graphic Design from the Kansas City Art Institute and School of Design. Ferdinand is the founding Principal of FMG Design, a nationally recognized design consultation firm. Ferdinand is a passionate collector of American historical glass specializing in bitters bottles, color runs and related classic figural bottles. He is married to Elizabeth Jane Meyer and lives in Houston, Texas with their daughter and three wonderful grandchildren. The Meyers are also very involved in Quarter Horses, antiques and early United States postage stamps. Ferdinand is the past 6-year President of the Federation of Historical Bottle Collectors and is one of the founding members of the FOHBC Virtual Museum.
View all posts by Ferdinand Meyer V →
This entry was posted in Bitters, eBay, History, Liquor Merchant, Medicines & Cures and tagged bitters, cherry, chicago, Frank, Holis, illinois, Jim Wolff, Lou, MacKenzie, McKenzie, McKinzie, wicker, wild. Bookmark the permalink.