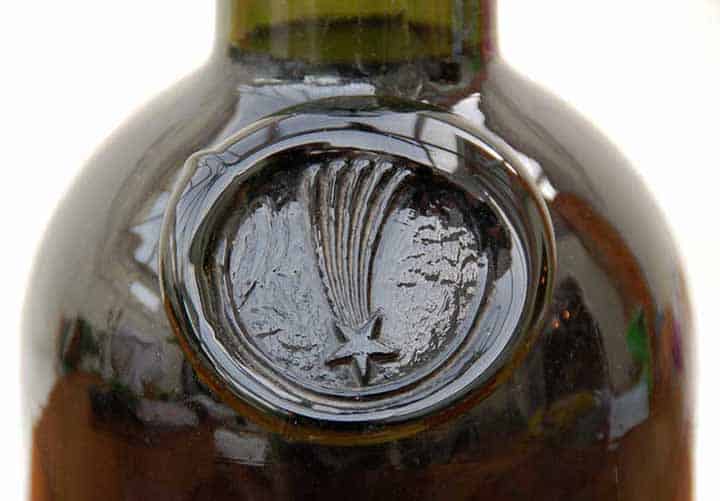 Ken Edward pulled me aside at the Downieville Bottle Show this past weekend and showed me what he called a “Halley’s Comet bottle” with an embossed comet seal and the date 1811 on a portion of the label. Ken was close but this is not Halley’s comet but rather the “Great Comet of 1811”.

“the year 1811 turned out to be particularly fine for wine production, and merchants marketed ‘Comet Wine’ at high prices for many years afterwards”

The comet of 1811 was thought to be responsible for the long, hot summer and dry autumn and the following abundant harvest that year. As it turned out, the year 1811 turned out to be particularly fine for wine production, and merchants marketed ‘Comet Wine’ at high prices for many years afterwards. 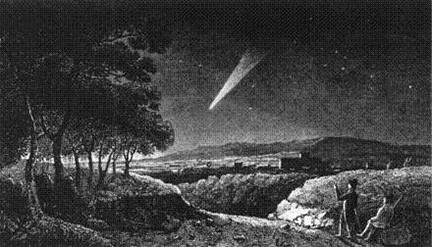 [Wikipedia] The Great Comet of 1811 was a comet that was visible to the naked eye for around 260 days, a record it held until the appearance of Comet Hale–Bopp in 1997. The comet was discovered March 25, 1811 by Honoré Flaugergues at 2.7 AU from the sun in the now-defunct constellation of Argo Navis. After being obscured for several days by moonlight, it was also found by Jean-Louis Pons on April 11, while Franz Xaver, Baron Von Zach was able to confirm Flaugergues’ discovery the same night.

The first provisional orbit was computed in June by Johann Karl Burckhardt. Based on these calculations, Heinrich Wilhelm Matthäus Olbers made a prediction that the comet would go on to become extremely bright later that year.

From May to August, the comet’s position made it difficult to spot because of its low altitude and the evening twilight. Both Flaugergues and Olbers were able to recover it in Leo Minor during August, Olbers noting a small but distinct tail, consisting of two rays forming a parabola, when viewing through a comet seeker. By September, in Ursa Major, it was becoming a conspicuous object in the evening sky as it approached perihelion: William Herschel noted that a tail 25° long had developed by October 6.

By January 1812, the comet’s brightness had faded. Several astronomers continued to obtain telescopic observations for some months, the last being Vincent Wisniewski at Novocherkassk, who noted it as barely reaching an apparent magnitude of 11 by August 12.

The Great Comet of 1811 was thought to have had an exceptionally large coma, perhaps reaching over 1 million miles across – fifty percent larger than the Sun. The comet’s nucleus was later estimated at 30-40 km in diameter and the orbital period was calculated at 3,757 years (later adjusted to 3,065 years). In many ways the comet was quite similar to Comet Hale–Bopp: it became spectacular without passing particularly close to either the Earth or the Sun, but had an extremely large and active nucleus.

Astronomers also found the comet a memorable sight. William Henry Smyth, comparing his recollections of the Great Comet of 1811 to the spectacular Donati’s Comet, stated that “as a mere sight-object, the branched tail was of greater interest, the nucleus with its ‘head-veil’ was more distinct, and its circumpolarity was a fortunate incident for gazers”.

The comet was apparently visible during the New Madrid earthquakes in December, 1811. A report on the first steamship to descend the Ohio River as it approached the confluence with the Mississippi River states, “December 18, 1811. – The anniversary of this day the people of Cairo and its vicinity should never forget. It was the coming of the first steamboat to where Cairo now is – the New Orleans, Capt. Roosevelt, Commanding. It was the severest day of the great throes of the New Madrid earthquake; at the same time, a fiery comet was rushing athwart the horizon.

The Great Comet of 1811 seems to have had a particular impact on non-astronomers. The artists John Linnell and William Blake both witnessed it, the former producing several sketches and the latter possibly incorporating it in his famous panel The Ghost of a Flea.

The English travel writer, novelist, and political economist Harriet Martineau (1802–1876) makes an odd reference to not seeing the comet in her Autobiography: “When the great comet of 1811 was attracting all eyes…[n]ight after night, the whole family of us went up to the long windows at the top of my father’s warehouse; and the exclamations on all hands about the comet perfectly exasperated me,–because I could not see it!… Such is the fact; and philosophers may make of it what they may,–remembering that I was then nine years old, and with remarkably good eyes.”

At the midpoint of War and Peace, Tolstoy describes the character of Pierre observing this “enormous and brilliant comet […] which was said to portend all kinds of woes and the end of the world”. The comet was popularly thought to have portended Napoleon’s invasion of Russia (even being referred to as “Napoleon’s Comet”) and the War of 1812, among other events. In 2012 the Off-Broadway musical Natasha, Pierre and the Great Comet of 1812 by Dave Malloy opened to wide acclaim; the musical chronicles the romantic plot of Natasha, Anatole and Andrei, culminating in Pierre’s witnessing of the comet.

The year 1811 turned out to be particularly fine for wine production, and merchants marketed ‘Comet Wine’ at high prices for many years afterwards. The film Year of the Comet, a 1992 romantic comedy adventure film, is based on this premise and tells the story of the pursuit of a contemporarily discovered bottle of wine from the year of the Great Comet bottled for Napoleon. The film stars Penelope Ann Miller, Tim Daly and French film legend Louis Jourdan (his last film before retiring to the south of France, which is known for its wine making). 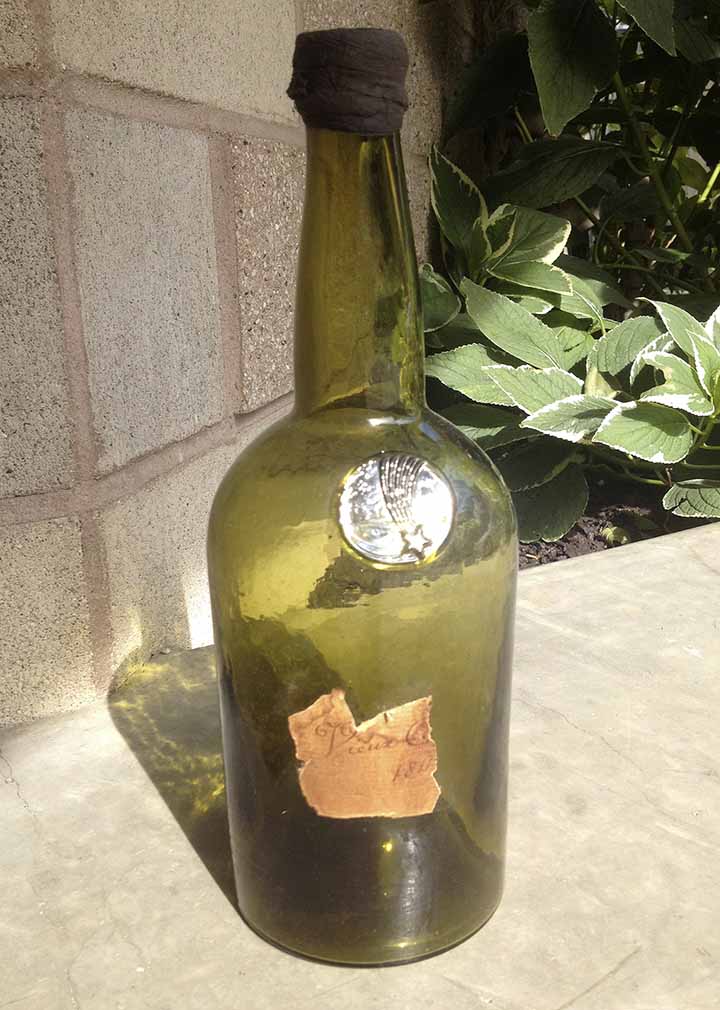 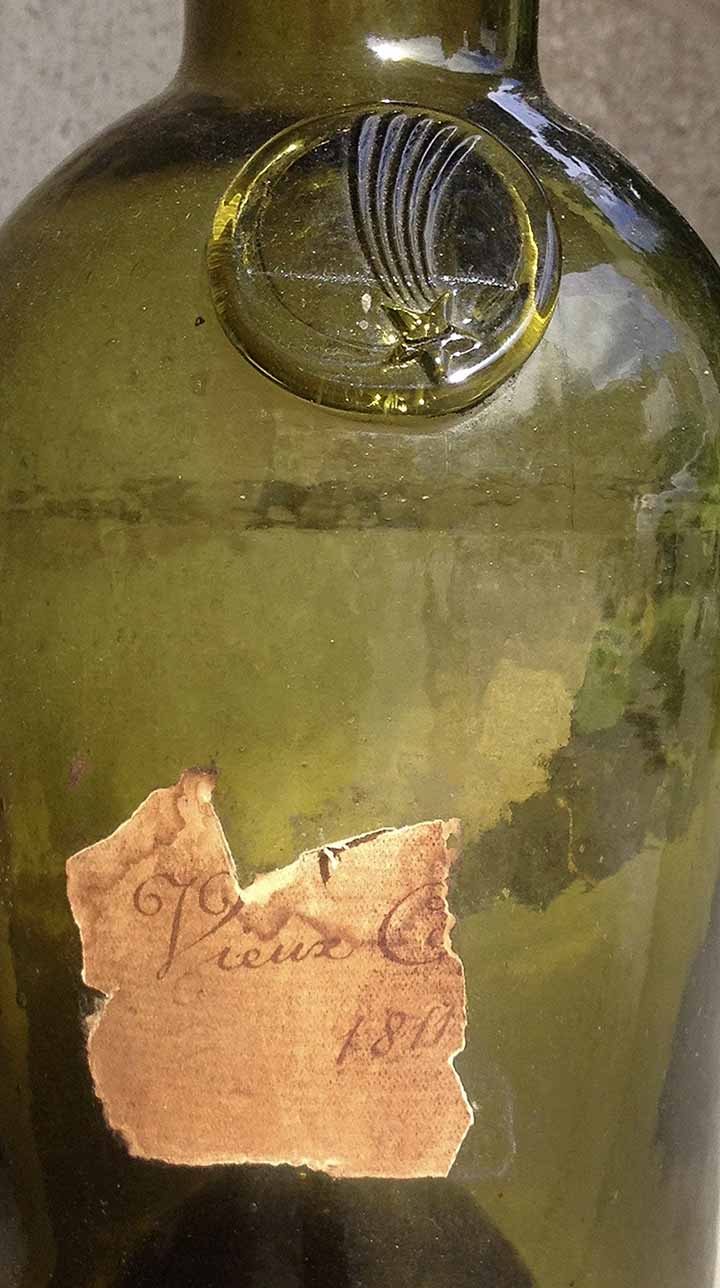 Ferdinand Meyer V is a native of Baltimore, Maryland and has a BFA in Fine Art and Graphic Design from the Kansas City Art Institute and School of Design. Ferdinand is the founding Principal of FMG Design, a nationally recognized design consultation firm. Ferdinand is a passionate collector of American historical glass specializing in bitters bottles, color runs and related classic figural bottles. He is married to Elizabeth Jane Meyer and lives in Houston, Texas with their daughter and three wonderful grandchildren. The Meyers are also very involved in Quarter Horses, antiques and early United States postage stamps. Ferdinand is the past 6-year President of the Federation of Historical Bottle Collectors and is one of the founding members of the FOHBC Virtual Museum.
View all posts by Ferdinand Meyer V →
This entry was posted in History, Wine & Champagne and tagged 1811, comet, Downieville, Halley, harvest, Ken Edward, Wine. Bookmark the permalink.